A land of water and whisky

A land of water and whisky

The traffic in Glasgow is slow and choking. A density of red lights and tailbacks makes it difficult even for a Honda CB1100 RS to make progress through the stationary metal.

This is exceptionally inconvenient seeing as there is a Highfield RIB patiently waiting for me in Oban and I’ve got a good two hours of snaking tarmac between the choking fumes of the city and the fresh air of the Inner Hebrides.

But as the glass-fronted high-rise building, expansive suspension bridges and terraced houses of the city shrink in the large, circular mirrors of this 70s-inspired machine, the landscape rapidly transforms. 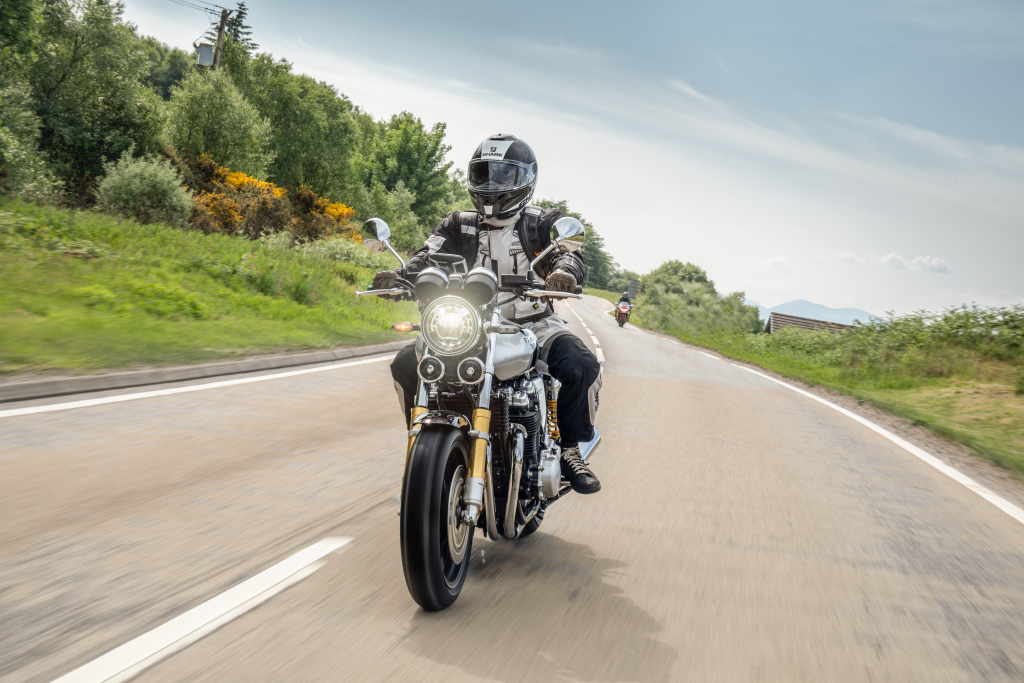 The A82 delivers vista-hungry travellers the goods, slashing through one last traffic-clogged hurdle in the shape of Dumbarton and exiting on the shores of the stunning Loch Lomond.

However, there’s no time to stop and admire these staggering views, as I have a date with some arguably more breathtaking panoramas that are only accessible by boat, as this trip is designed to showcase the breadth of Honda’s vehicular offerings.

The 1100cc inline four-cylinder engine of the retro-tastic Honda CB1100 RS thumps away beneath me, with every twist of the right wrist unleashing a deep below from the exhaust pipes and another squirt of pace. 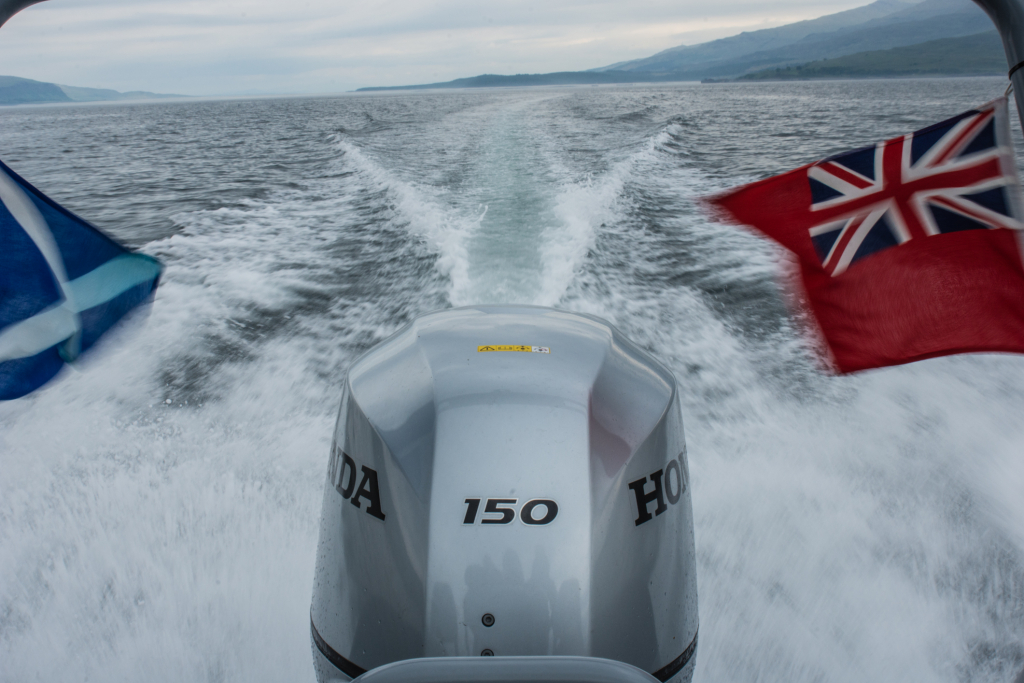 In sixth gear, the bike happily cruises at the legal limit of 60mph on these twisting Scottish roads, but should traffic ahead start to slow, it’s simply a case of clicking down a gear, hammering the throttle and breezing past.

The A82 curves around Lomond’s vast body of water and soon meets the A85, which might just rocket to the top of my list of the ‘greatest riding roads in the world’.

Undulations, challenging corners and long, expansive straights means it offers everything a keen motorcyclist could ask for, although I’d highly recommend a stop in Artisan Cafe just before Tyndrum before you tackle it. 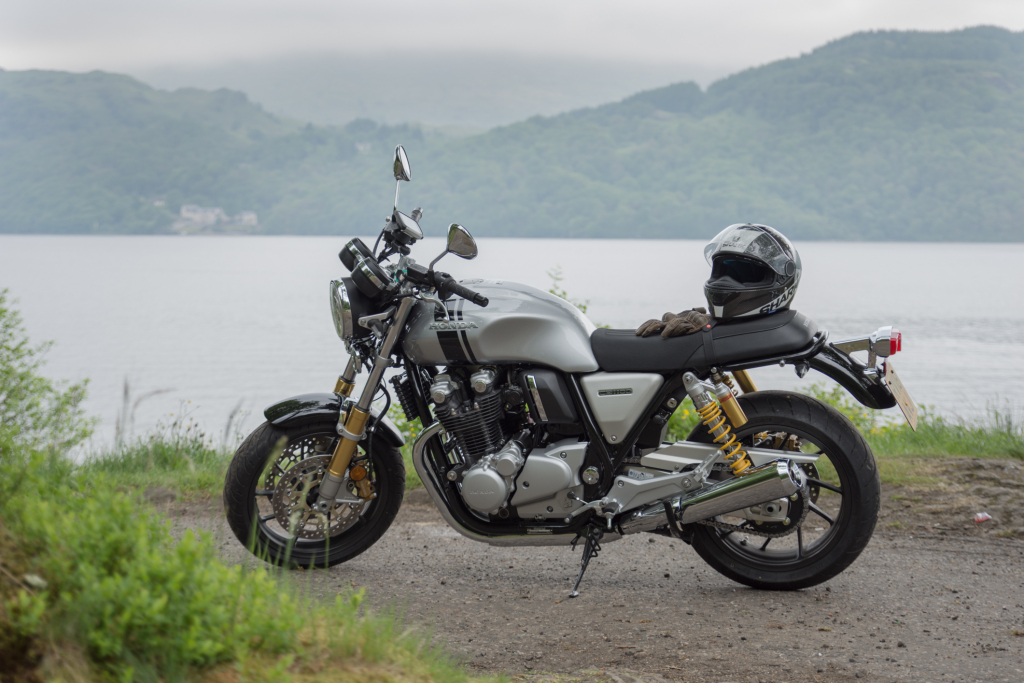 This hidden gem is housed inside an old church just off the A82 and offers a much-needed bowl of hot soup, cheese scone and arguably the finest home made carrot cake that’s ever passed these lips.

After two and half hours of solid riding (and a bit of cake-scoffing), I finally arrive at the Dustaffnage Marina in Dunbeg, just north of Oban.

“It just so happens to be the Feis Ile, or the Islay Festival of Music and Malt, when we arrive at the Isle of Islay”

It is here that the team from Highfield Marine are set to show off their latest line of aluminium Deluxe and Patrol aluminium-hull Rigid Inflatable Boats (RIBs). 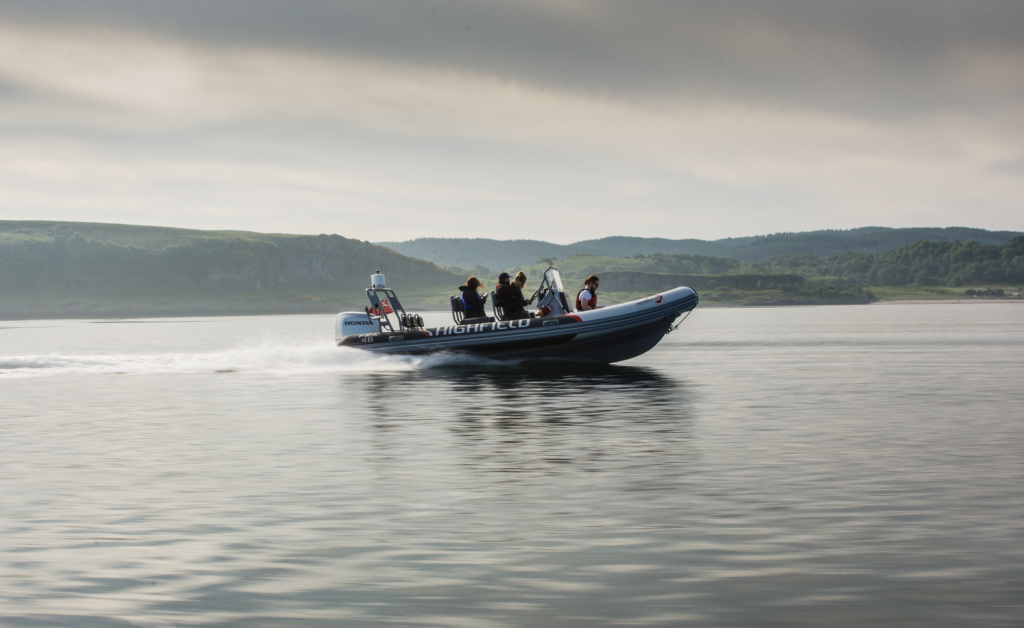 The sleek watercraft is powered by Honda’s range of powerful and ultra-reliable marine engines, with the most potent of all the craft available here packing a monster 200hp outboard motor.

A quick brimming of the fuel tanks and we set off on our first destination of Tobermory, navigating the Sound of Mull to reach the first of several remote whisky distilleries planned on this venture.

The skies are clear and the sun is shining but the temperature out on the open water rarely gets above 14-degrees, while the wind chill factor makes it bite harder. 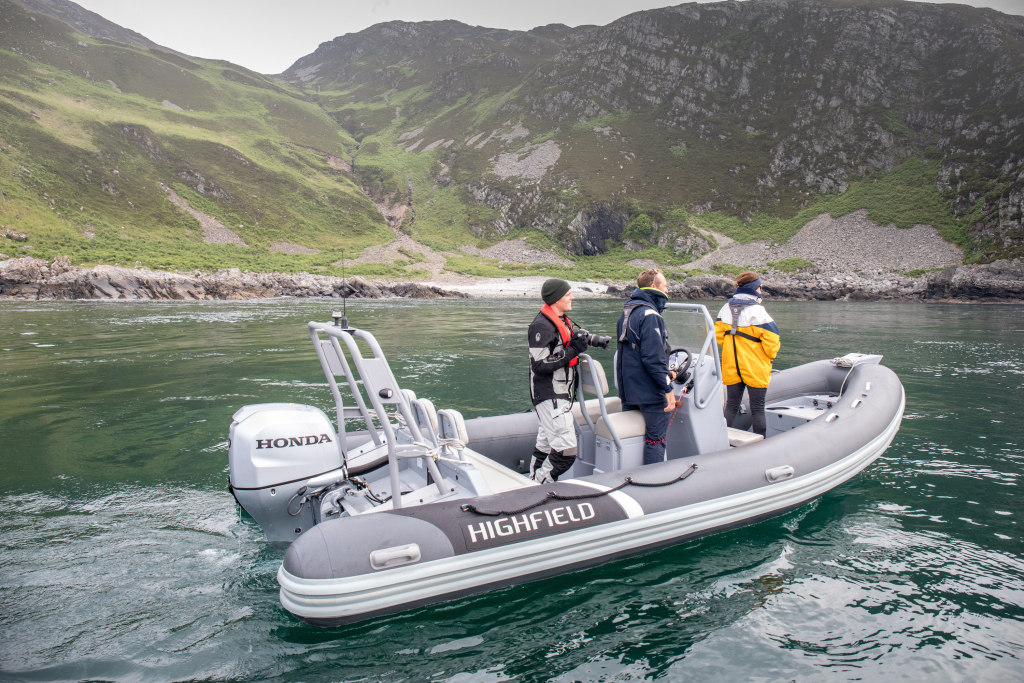 The scenic route travelled on the motorcycle meant there was little time for me to change into boating attire, so I enjoy training my camera on he local seals and seabirds from the comfort of my thick motorcycle waterproofs.

Some will recognise the colourful waterfront of Tobermorey from the children’s TV show , which entertained a generation of nippers from in the early 2000s. 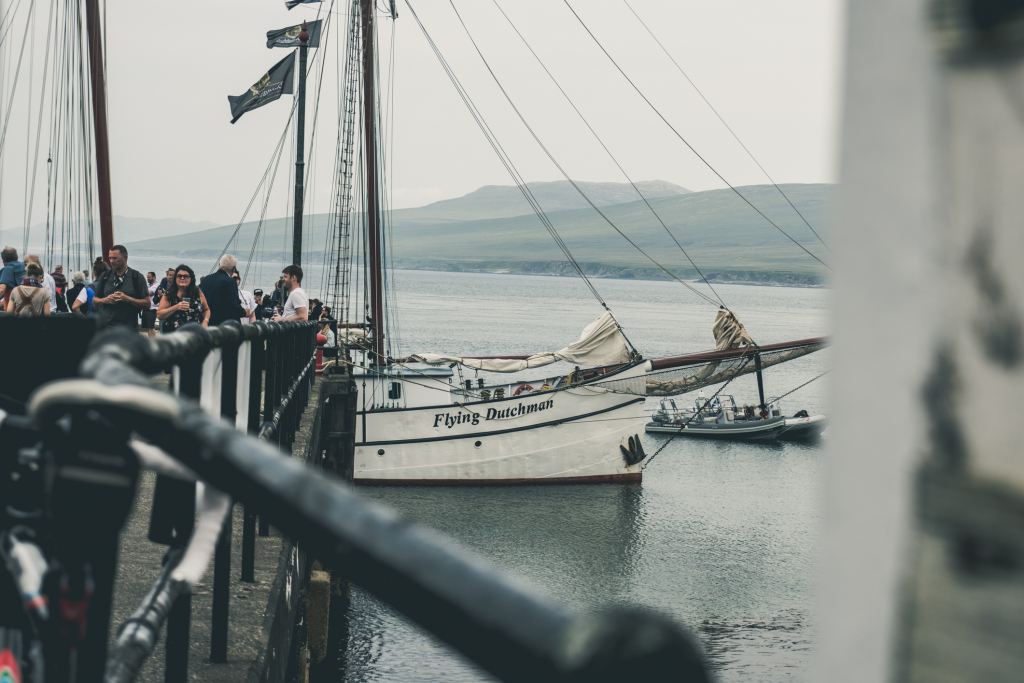 But it is also the site of a famous single malt Scotch whisky distillery that has been operating on the Isle of Mull since 1798, with current owners Burns Stewart Distillers offering fascinating tours and all-important tasting sessions.

With the motorcycle neatly tucked away back on the mainland for the foreseeable, it gives me a chance to savour the smoky flavours and rich tones of the Tobermory 10 and 14-year old single malts, while taking in the gorgeous aromas of the cask room. 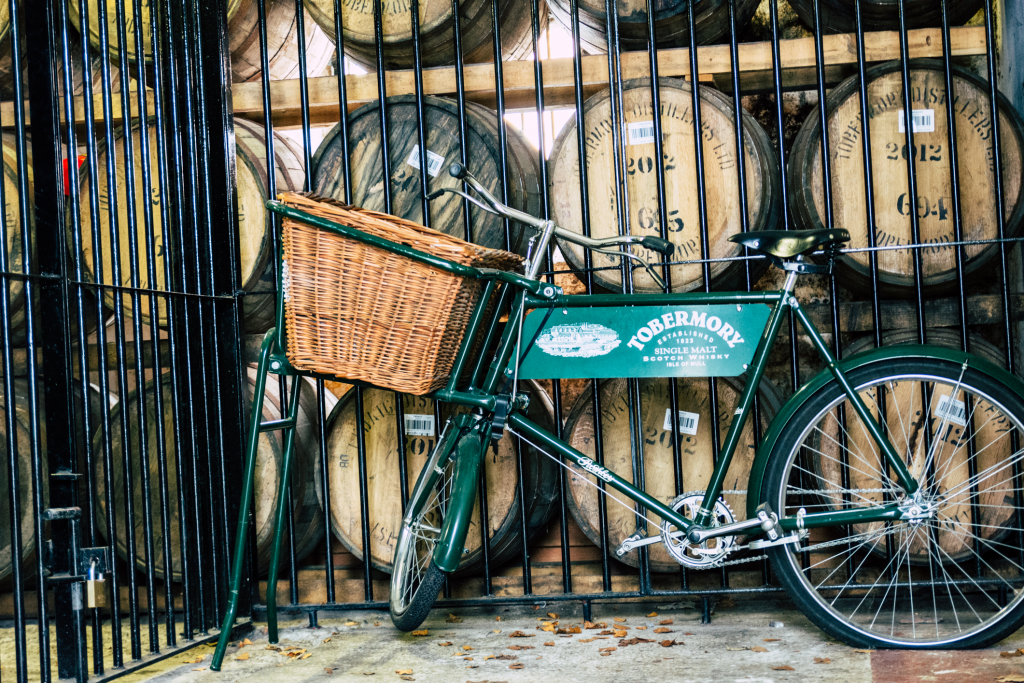 Hunt hard enough and it’s possible to purchase a heavily sherried number from the 1970s, but there are only 650 bottles in existence and unsurprisingly, the staff isn’t keen on punters sampling a ‘wee dram’ of that.

After a solid day navigating both land and sea, it’s time to head back and turn in at the Perle Oban Hotel that’s located in the centre of this quaint little harbour town.

Following hearty plates of food from the suitably titled Cuan Mor restaurant (it is the Gaelic for ‘big ocean’) and a restful night’s sleep, we rise early for the second part of this boat-based distillery tour. 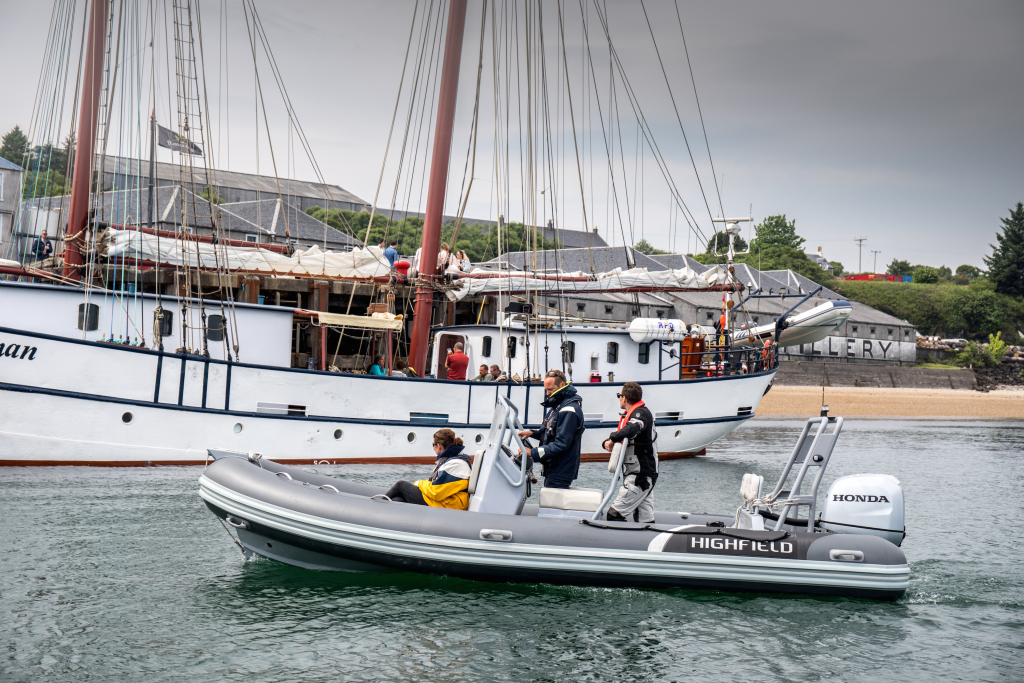 The sound of Honda’s powerful marine engines idling greet us at the marina (luckily, the Honda CB1100 RS is also still parked up safely) and we jump on-board for a long and buttery-smooth ride south towards Islay.

We speed past fishing vessels, day boats and enormous luxury yachts, only stopping to sample the Strait of Corryvreckan, which is regarded as the third largest whirlpool in the world.

It proves the perfect opportunity to prove exactly what these powerful Honda Marine engines are capable of, as we gleefully bounce around the tidal race that reaches speeds of up to 10mph beneath us. 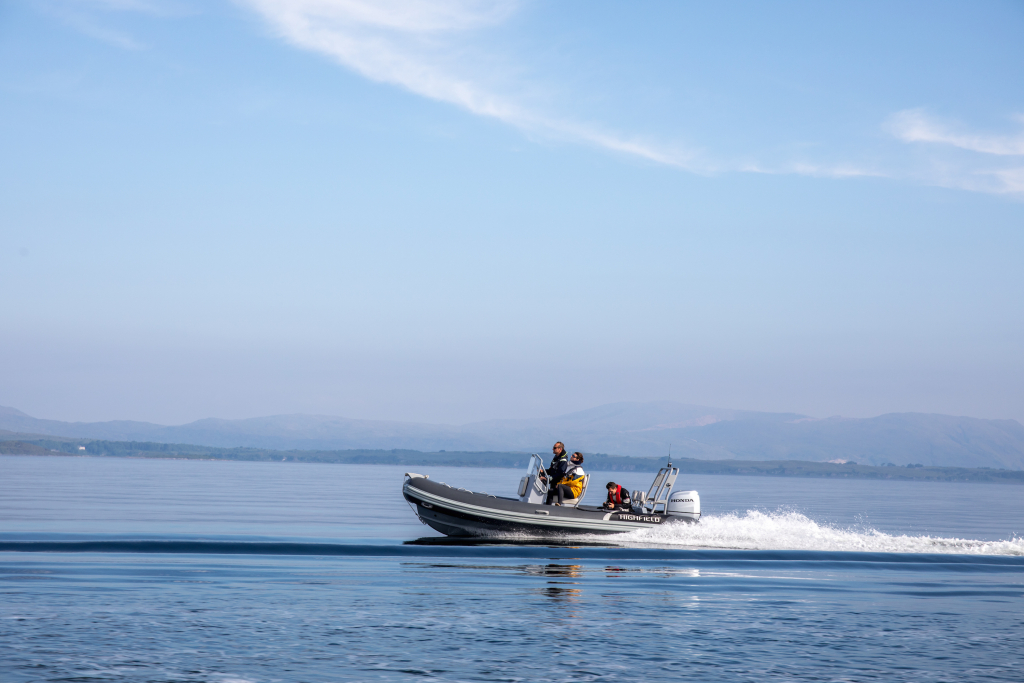 Luckily, the conditions are particularly favourable, as standing waves of more than 30ft have been recorded here in the past. A freak of nature that should be avoided by even the most capable crafts.

Death well and truly diced with, we head towards the Caol Ila Distillery on the Isle of Islay for our first whisky tasting of the day, but not before spotting the dorsal fin of Minke whale playing in the waters.

“We speed past fishing vessels, day boats and enormous luxury yachts, only stopping to sample the Strait of Corryvreckan”

It is natural wonders like this that serve as a reminder of the wild charm and epic beauty Scotland has to offer. 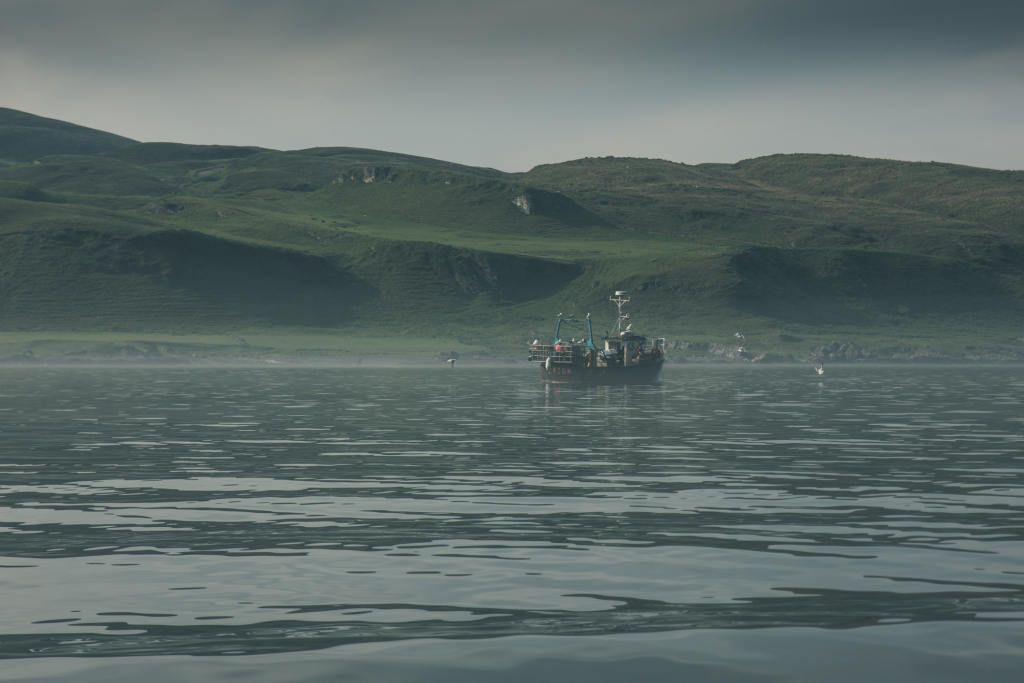 It just so happens to be the Feis Ile, or the Islay Festival of Music and Malt, when we arrive at the Isle of Islay.

This week-long event attracts whisky lovers from across the globe with the promise of access-all-areas distillery tours, free tasting and great music.

We moor up just offshore from the Bunnahabhain Distillery, which is blaring out live music and teasing with the delicious smells of wood-fired pizza, roasted lamb and malt whiskey. 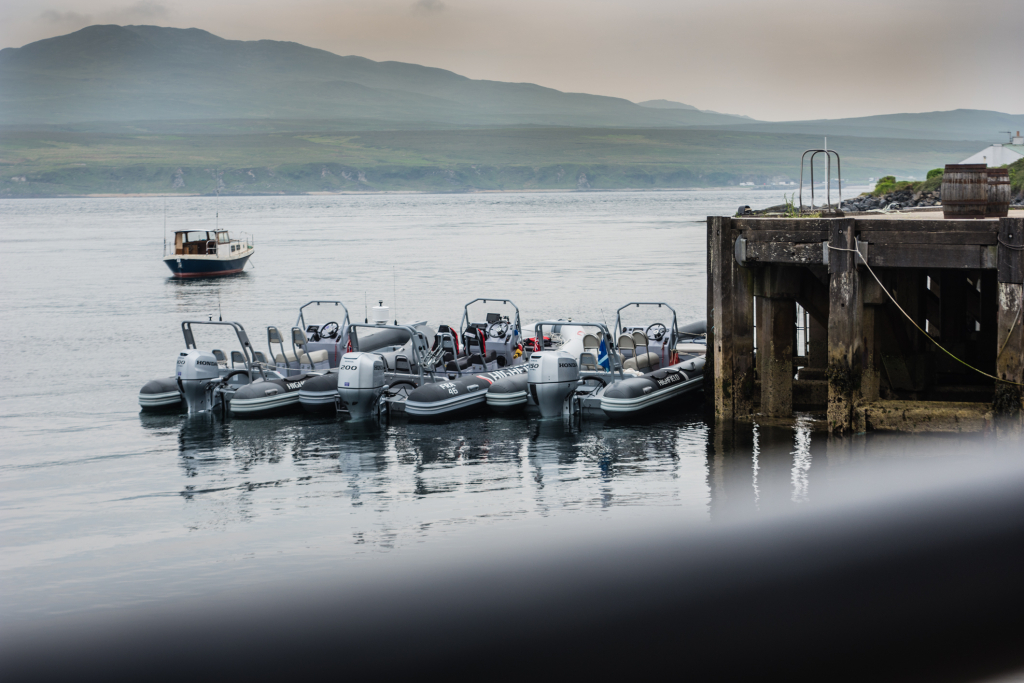 Food consumed, good times had and coffee knocked back, it is time to return to the mainland and enjoy the A85 one last time before the CB1100 RS has to be returned to its home at Victor Devine Honda in Glasgow.

This trip wouldn’t have been possible without the navigational skills of the Highfield Marine team, the power of Honda’s marine engines and a retro-modern motorcycle marvel to deliver me there safely and with an irremovable smile.

“The A82 curves around Lomond’s vast body of water and soon meets the A85, which might just rocket to the top of my list of the greatest riding roads in the world”

As I board the plane that will transport me back home, the words of Highfield Marine’s director Steve Harrison ring in my ears. 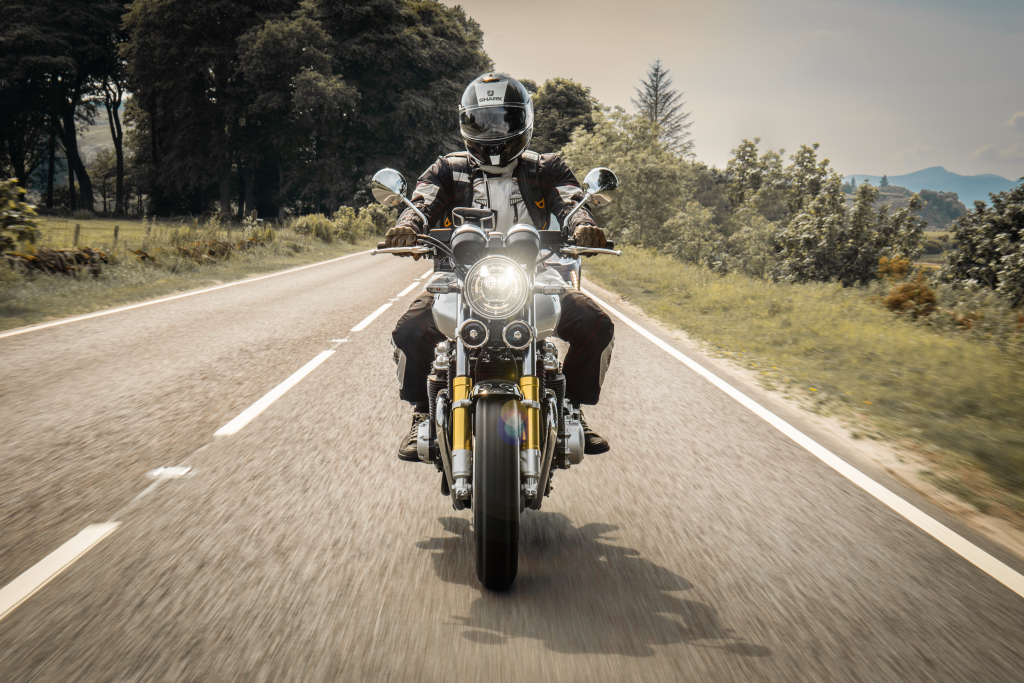 “You could spend your entire life exploring these small islands off the coast of Scotland and never see everything”.

That sounds like the perfect excuse to return to me.