There is an unwritten rule that governs the surf community and protects secret surf spots from being unwittingly revealed to the general public. It sounds excruciatingly selfish, but the last thing any local surfer wants is a load of out-of-towners turning up in their droves and clogging up the waves.

See, surfing is a solitary pursuit and those individuals that dedicate their lives to meticulously studying weather patterns, following incoming swell via wave buoys and downing tools whenever the surf is up really don’t want to share their patch with anyone outside of the trusted circle of wetsuit-clad hombres.

That’s why we’re not going to tell you exactly where we are heading on this road trip, partly through fear of having our windscreen smeared in Sex Wax (not that kind), but also because we can totally appreciate the peace and tranquility that comes with not having to share a wave. 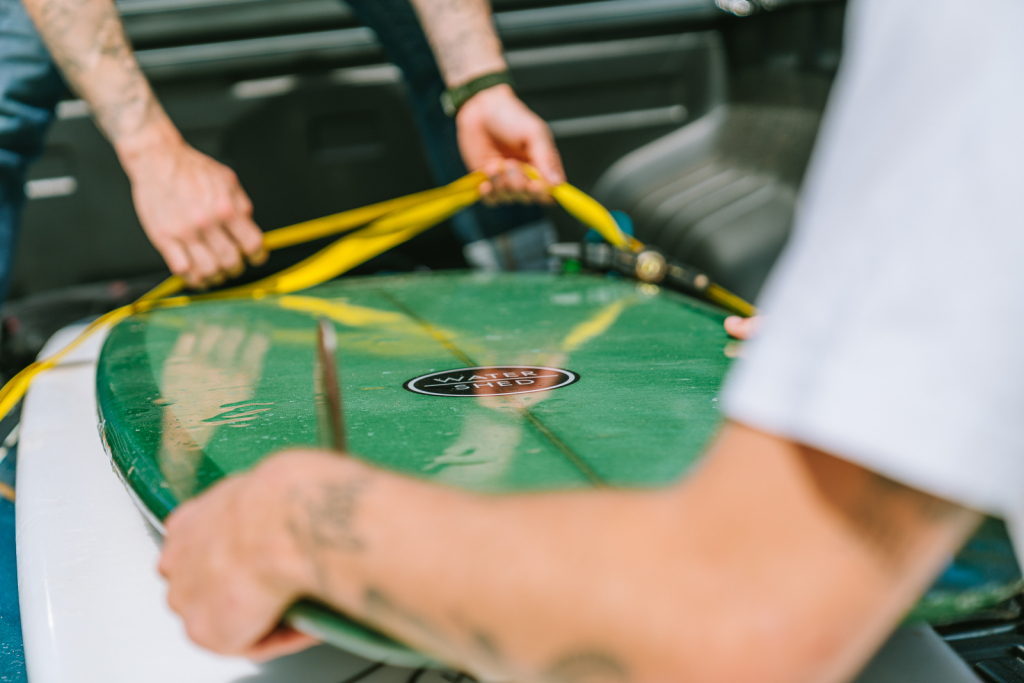 Due to the fact that our island is perilously perched in the North Atlantic and surrounded by some other fairly beige seas, the act of effortlessly gliding down a wave in the UK isn’t exactly filled with glamour. Conditions can be epic in winter, but it’s freezing cold and it’s highly likely you’ll have to strip off in a barren car park, while the rain pierces your skin like little tiny needles.

“The Amarok proved as capable and comfortable as ever, cresting over rocky surfaces without bothering the delicate boards in its bed”

Things hot up in the summer, but the surf inevitably drops off, which is why we know our trek down to the deep South West (the mecca of surf in the UK) is going to be a gamble that either results in lucky mix of sun and swell, or manifests itself as a huge waste of diesel.

We awake at the crack of dawn and hastily chuck our gear into the back of the VW Amarok. That’s the beauty of a pick-up truck, nonchalantly throwing things into the rear bed becomes second nature after you’ve lived with one for a while. 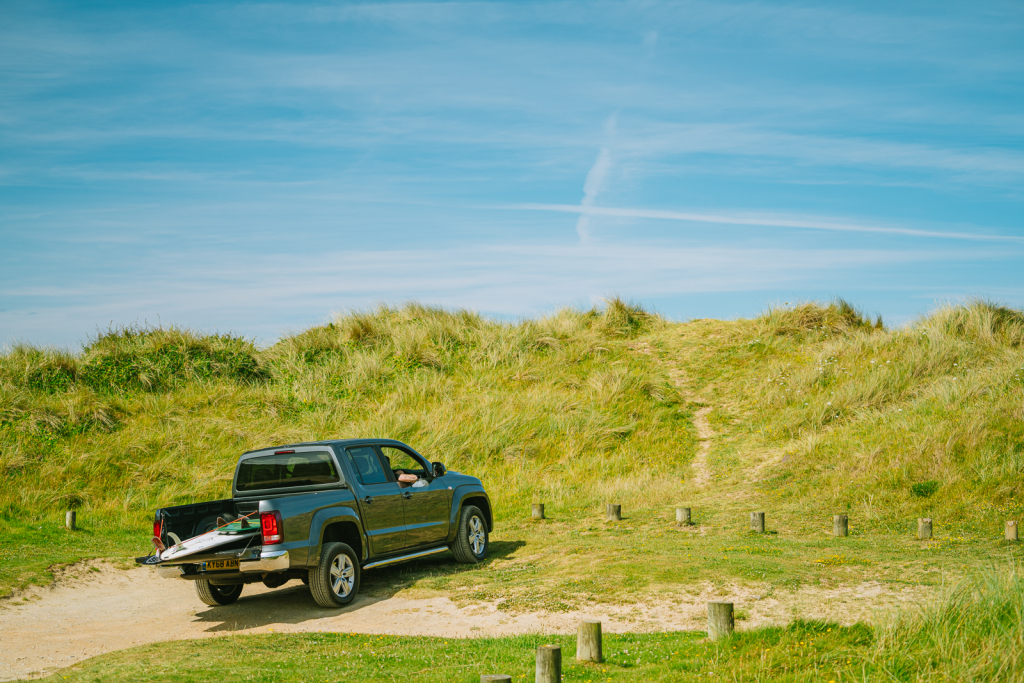 Three-up with a couple of boards in the rear, several cases of heavy camera gear and multiple cups of steaming coffee, the big grey truck rumbles through Dorset, past Weymouth and onward towards a stretch of coastline that just out into the Atlantic and arguably sucks up more swell than anywhere else in the UK.

“Why not hop on a board that you know will work at your local spot and just go out and have a laugh?”

It is the height of summer and the roads are already starting to busy with caravans and family wagons overloaded with camping kit, despite the stupidly early hour. But the powerful V6 diesel residing underneath the bonnet makes swift work of slower moving vehicles with enough creature comforts inside to keep everyone happy or sleeping.

The plan is to meet our contacts at Watershed, a surf shop in the heart of Newquay that approaches surfing as it should be: with a smile and an open attitude. The boards they sell genuinely work in the typically sloppy conditions we mostly experience here and they rarely get out in the water to do anything but have a laugh. 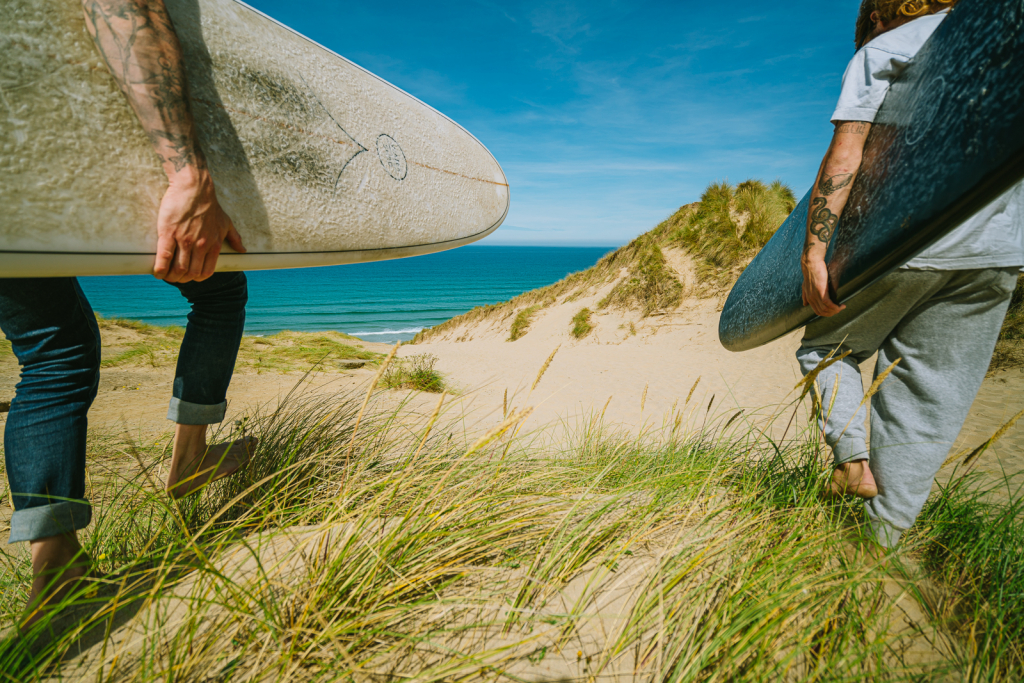 We meet Jamie, one of the young riders on the Water Shed roster, who helps load a selection of branded longboards into the rear of the bed as the rest of the crew go on the hunt for a coffee shop that’s open. These early starts require plenty of caffeine.

Then ensues a chat about the best direction to take for waves. The seas have been flat for days and Jamie is eager to get in the water no matter what, so suggests we take a look at a vast stretch of coastline that works with this swell and wind direction.

It is a fairly slow drive out of Newquay, heading cross country towards our spot but the sun is beating down from above. The blue, cloudless skies make the scenery that passes look more like Californian than Cornwall. 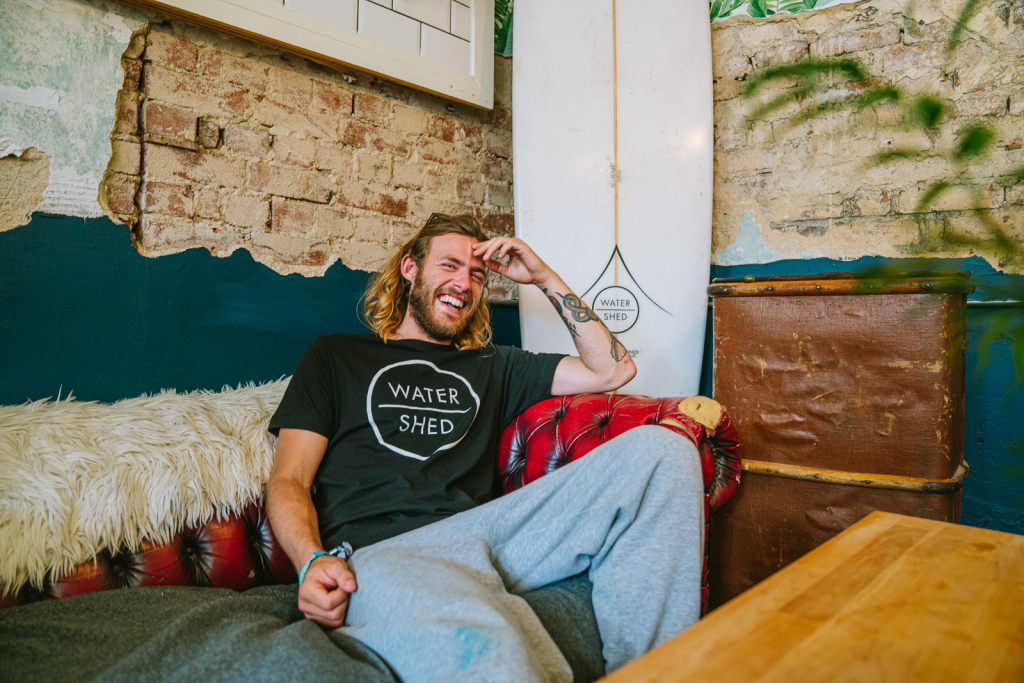 Jamie explains that Watershed was founded as a bit of a backlash against the all-too serious surf shops and board makers that had started to crop up in the early 90s. Many of these have subsequently gone under as the rapidly changing world of fashion has long moved away from surf culture.

“The thing is, we rarely get the conditions to produce the sort of clean, barrelling waves you see on posters. So why not hop on a board that you know will work at your local spot and just go out and have a laugh?” he says as we trundle along the narrow
B-roads.

It’s that kind of attitude that we will need today, considering the forecast looks extremely shoddy on all fronts but the weather. We pull off the main road and take a gravel path that isn’t really sign-posted. It feels wrong but apparently it is legal. We think. 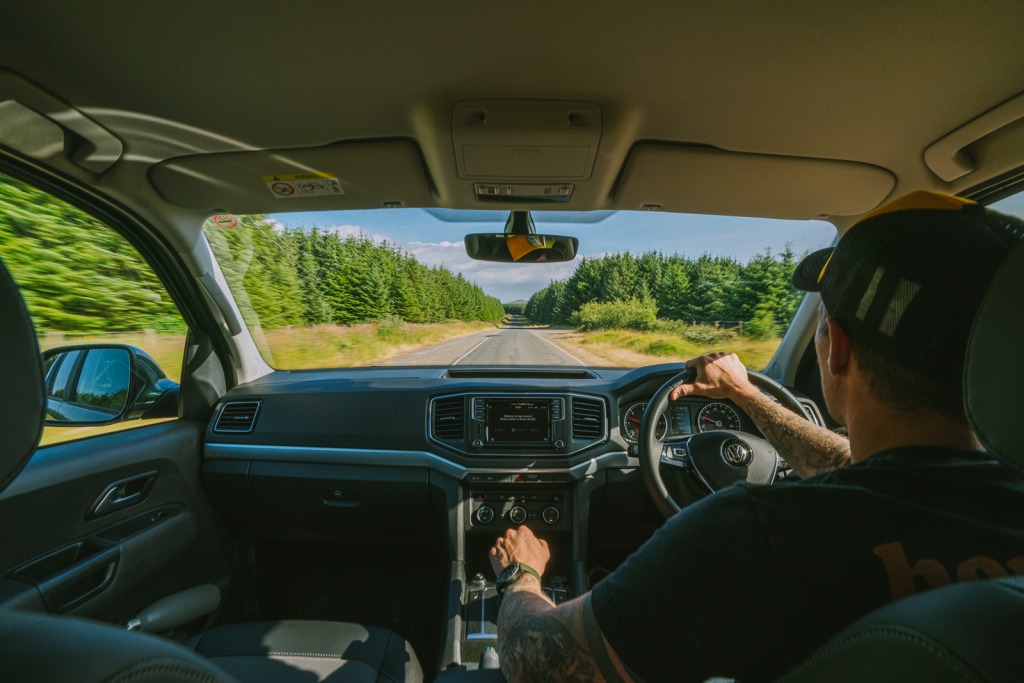 The Amarok features a handy ‘one-button’ off-road mode, which takes care of everything from ABS to a proper hill descent mode. VW’s 4Motion all-wheel-drive technology also takes the hassle out of traversing tough terrain, while there’s a maximum slope angle of 29.5-degrees and a wading depth of 500mm.

We won’t be needing that today, seeing as the terrain is little more than a dusty track, but it’s nice to know the machine can handle it, especially as we are driving a little too enthusiastically for the conditions.

The opportunity to depress the off-road button arrives when we are faced with a small sand dune to traverse. We probably could have avoided it but A) it wouldn’t be as cool and B) it allows us to park a little closer to the beach. 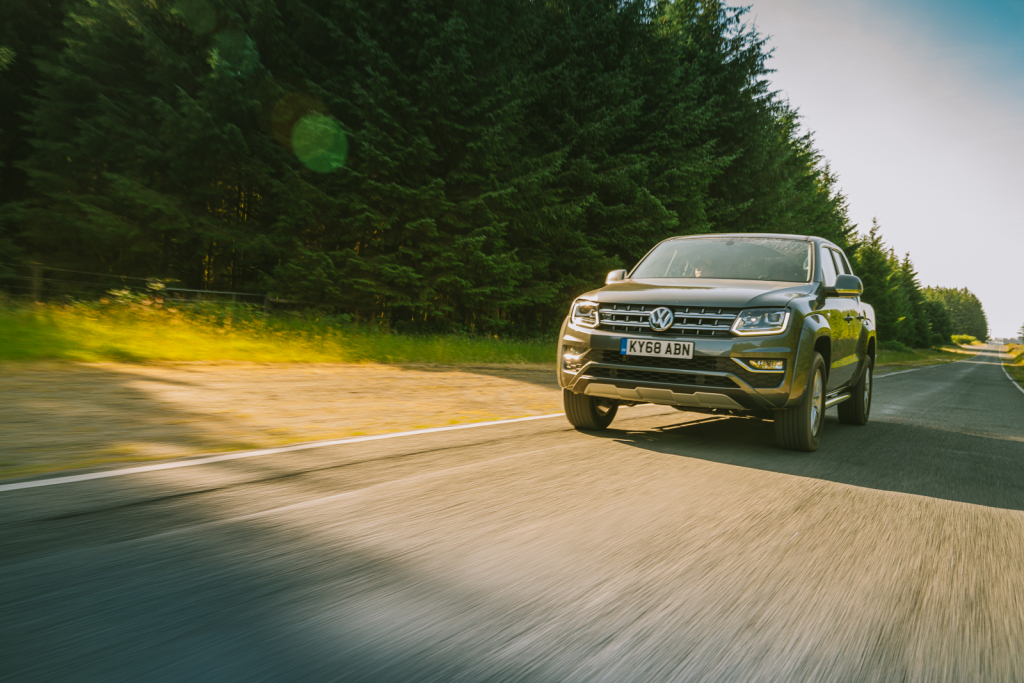 Unloading the Amarok takes no time at all, with the 9ft+ longboards rapidly unstrapped from their lashing points and camera kit effortlessly removed. Jamie’s wetsuit is still damp from an evening surf the night before (that’s the true sign of dedication) and the boards are a lot heavier than the skinny short stuff we typically take on trips.

We lug the logs on our shoulders and creep over the dune-blown precipice. Down below is a vast stretch of white-sand beach. The Atlantic is azure blue and there is not a single soul in the vicinity. Small lines of surf come marching into the enormous bay. Jamie’s shock soon turns in to stoke and we hastily make our way down to the deep blue below.

It’s a fair hike down to the beach and the waves are a lot smaller than they looked from way up high, but it’s more than surf-able and the water is crystal clear. It’s amazing how well the Atlantic scrubs up with a bit of sunshine. 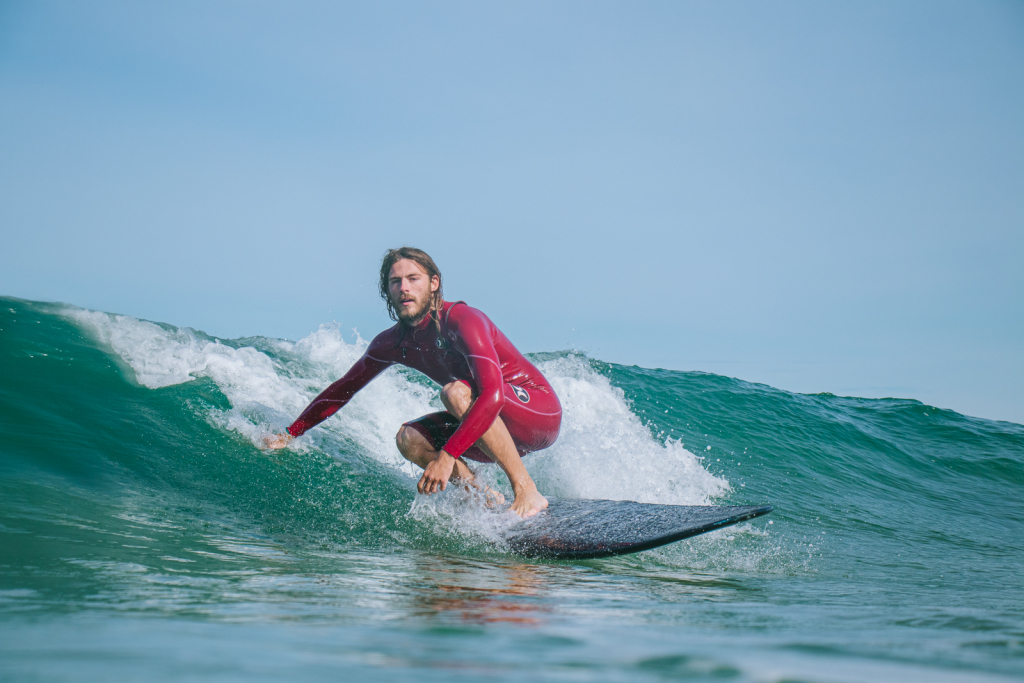 The rest of the morning is spent trading waves, swapping surf craft and trying not to run over our photography Pindy, who has decided to brave the sea (and the fairly crappy surfing) to snare a few action shots.

The waves are below average, but then the ability from yours truly is not much better, but that doesn’t stop all involved from having a laugh. There’s enough time to enjoy a bit more ‘soft-roading’ before loading upon the boards and it is just as much fun kicking up dust as it is sea spray.

We chat some more over a coffee at the Watershed shop, finding out about the brand and the surfers that frequent this cafe upstairs to swap stories. It’s a cool place and we lucked out with the combo of surf and sunshine – a rarity on these shores. 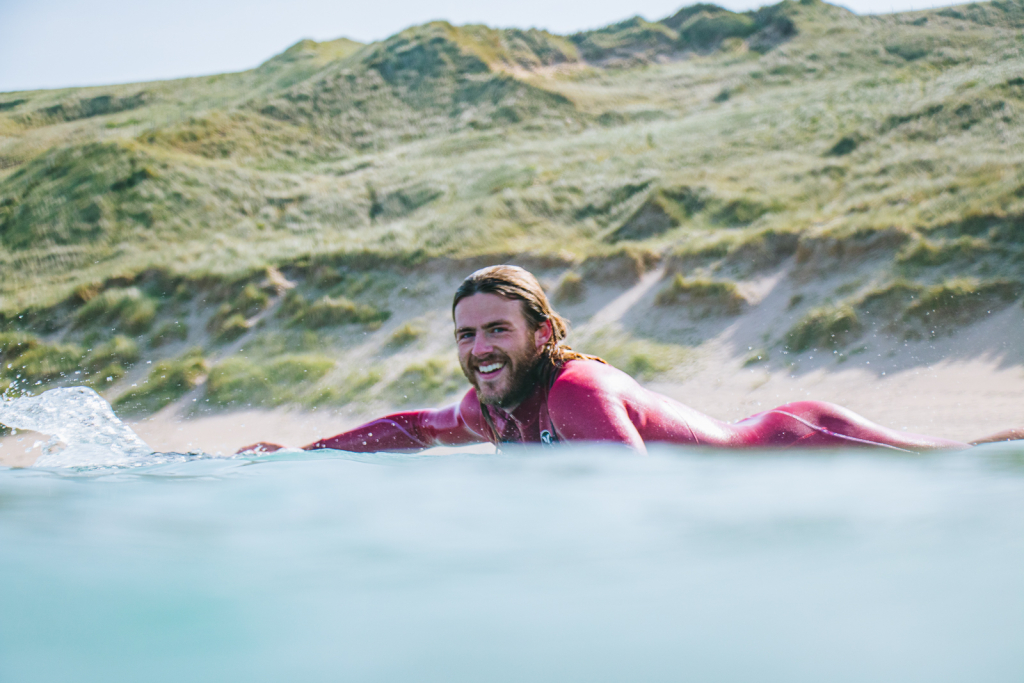 The Amarok proved as capable and comfortable as ever, cresting over rocky surfaces without bothering the delicate boards in its bed. Heated leather seats, a decent stereo and myriad cupholders are also bonus items for any road trip of this nature.

But more importantly, it transported all of us to a brand new location with perfectly unspoilt surf and that makes any early start worth it.

A version of this story was written for the excellent DriveTribe.