The feint scat, scat of a welding torch emanates from behind two large, wooden doors. A gap in the dust that has collated on the window allows a brief look inside, as sparks momentarily light up the dingy interior.

A thick fog hangs in the air, as cigarette smoke adds to the dust and fumes of the workshop, but the silhouette of two figures can be seen hunched over a motorcycle in the deepest reaches of the room.

The outlines belong to Nik Heer and Fabian Witzig, the creative minds behind The Young Guns Speed Shop in Rapperswil, Switzerland.

Flat-Out has flown into Zurich to hang with these motorcycling enthusiasts and talk about tinkering, their obsession with nitrous systems and Miracle Mike, the most recent project that sees an Indian Scout transformed into a sprint racer. 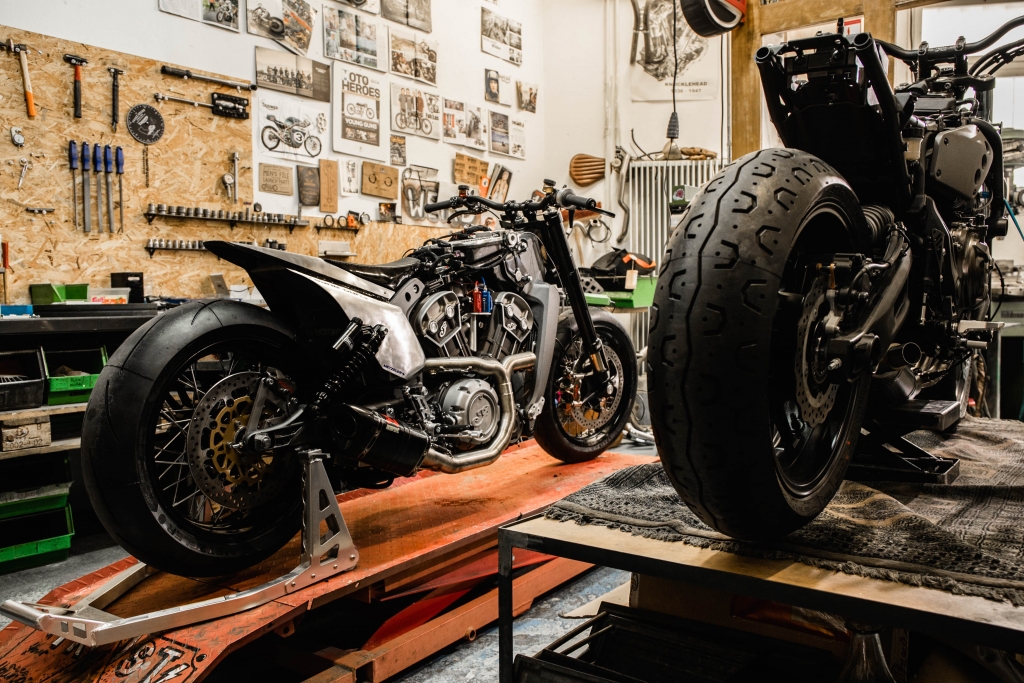 Nik and Fabian explain that the pair met at a young age, but embarked on an engineering career when the dynamic duo decided to do up an old barge that lay in wreck near their home town.

“We wanted to make the ultimate party boat,” explains Nik, who is the self confessed ‘creative mastermind’ behind The Young Guns.

“The boat had a bar on it, places to play poker, but we went back to see it a few years later and it had sunk,” he adds. 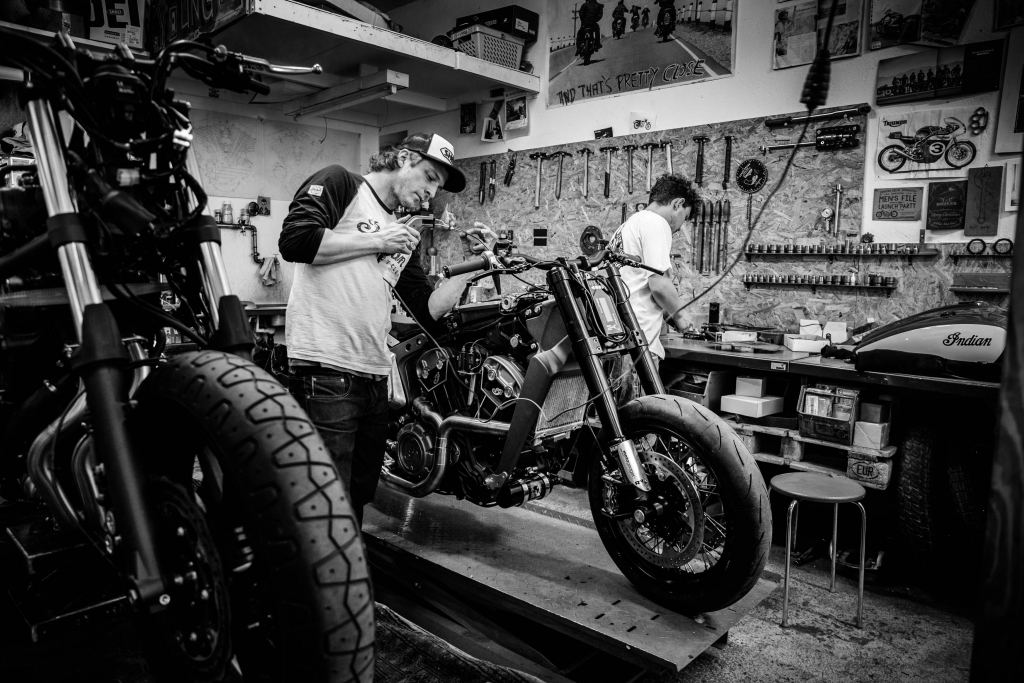 Nik was pretty much nurtured on the smell of petrol fumes, as his father and grandfather had long harboured a passion for fast bikes, vintage cars and seriously seductive speedboats.

“My first taste of a motorcycle was a tiny 50cc scooter,” Nik says. “You can ride one as a teenager around here and everyone has one. But one of the main parts dealers is also located in town, so we would start messing with the scooters, making them faster, tuning them up,” he adds.

Fabian has a large grin plastered across his face at this point. He was brought up on a farm and was taught how to fix large machinery before he could walk. His engineering mind knows no bounds. 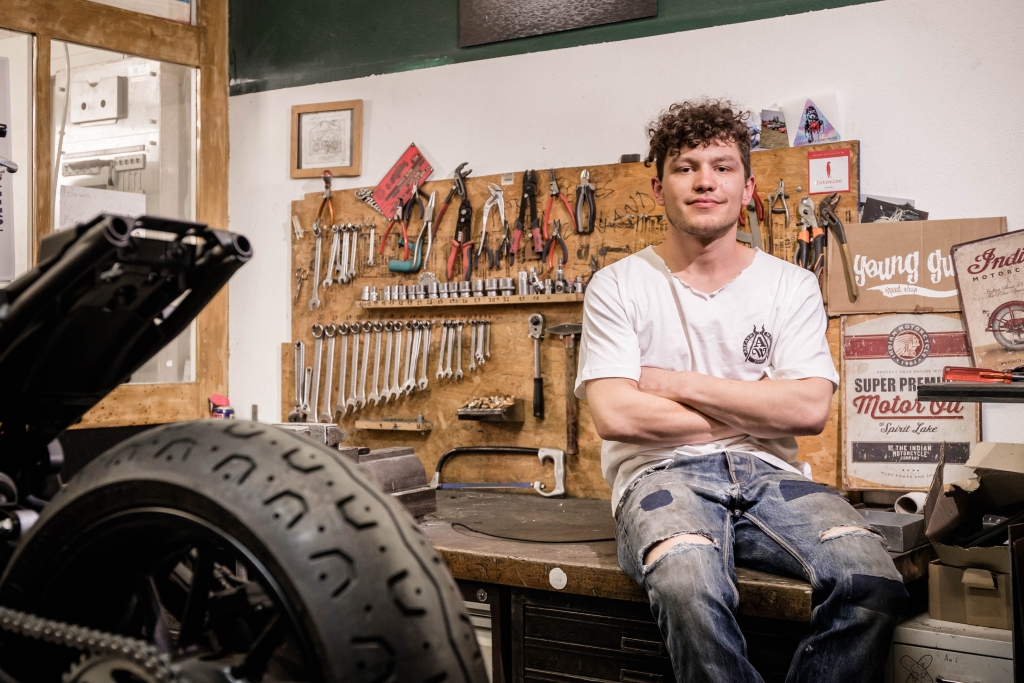 “I was always wrenching,” he says with the hint of laughter in his voice. “I could fix stuff at an early age and had a playground of machinery to practice on,” he adds.

The duo decided to form the speed shop after friends, family and ‘complete strangers’ started asking them to work on their bikes.

“Doing these small jobs, like fabricating indicators and building custom parts, is like our bread and butter,” explains Nik.

“It keeps the shop running but it’s not what we are all about. We like to take on much bigger projects, stuff that wins trophies”. 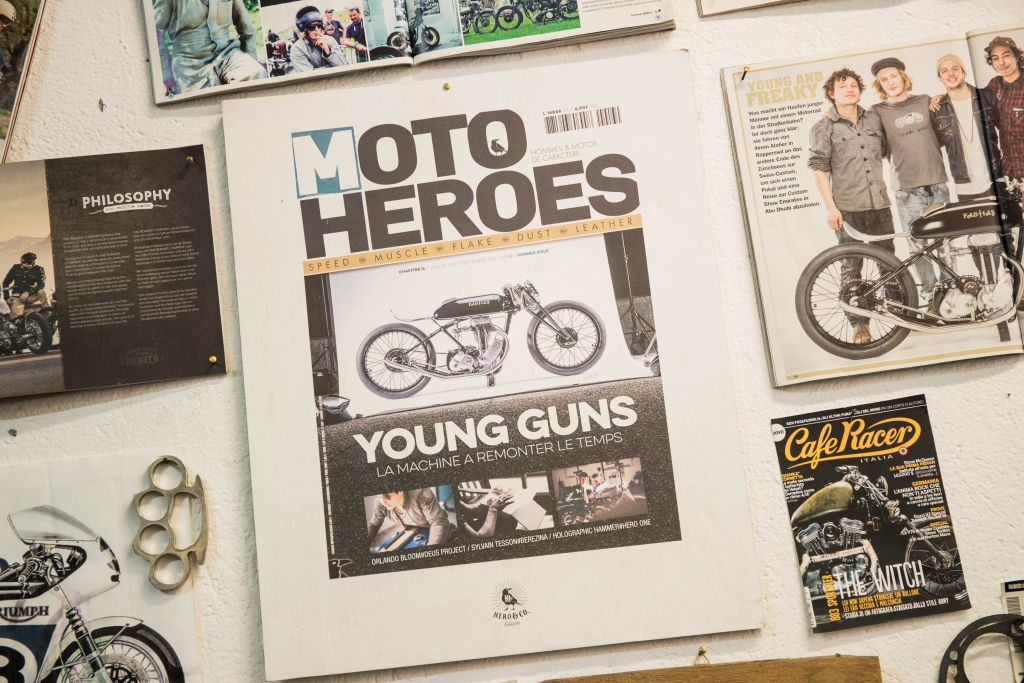 The boys walk me through their workshop, explaining the various posters and pieces of artwork that hang on the wall as we meander around the place.

In amongst the numerous bike parts, half-finished projects and cigarette butts, there is a small bar for entertaining friends. The boys know how to have a good time and instantly offer me a drink.

Over the heady froth of a pint, Nik explains that one of his racing sponsors is a German beer company, which not only provides funds for his flat tracking obsession, but also plies them with free barrels of beer. 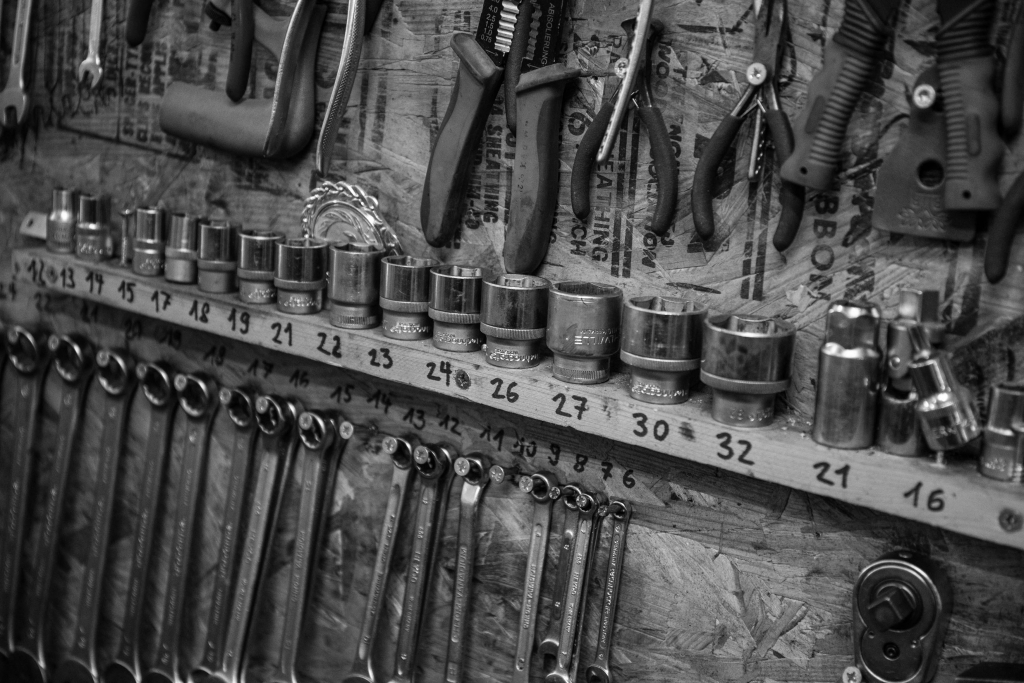 Nik is only 26 but he already holds a record at Bonneville for land speed racing and has an impressive racing career in his back pocket.

“I have always loved dirt racing,” he says. “It became an obsession of mine when I first saw my Triumph Track Master bike and I hope to race a full season this year. If we can find time”.

The boys invite me outside to check out the van that transports The Young Guns around Europe. 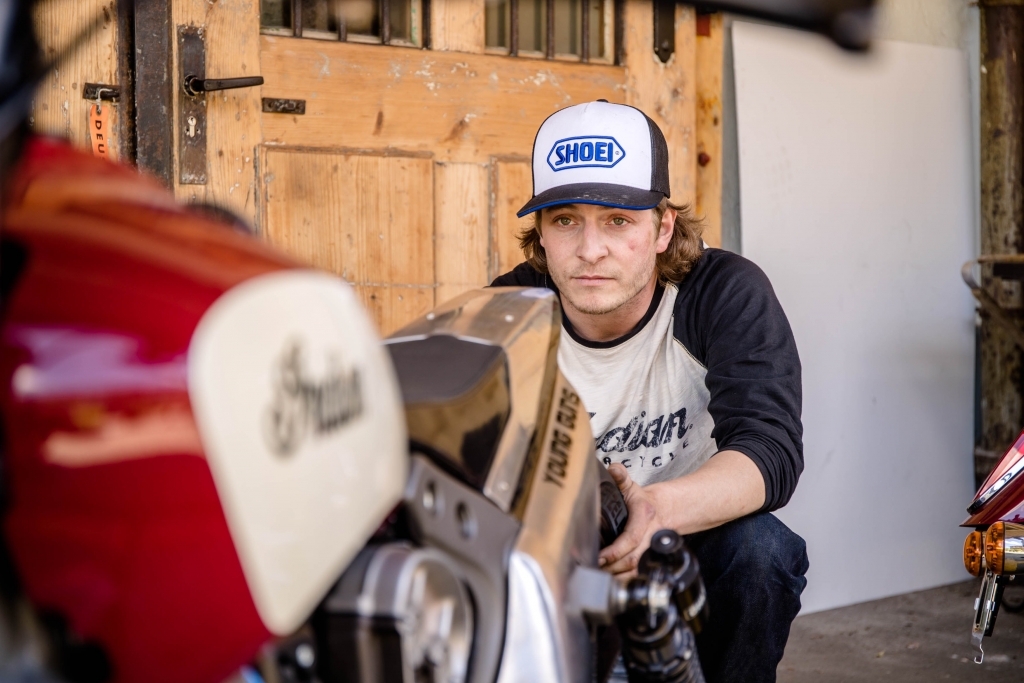 I squint as the blazing Swiss sunshine burns my retinas but as my eyes adjust to the light, I can see a massive vintage Merc van that’s emblazoned with the Young Guns and Indian Motorcycles logos.

Fabian opens the side door and reveals their latest project, Miracle Mike. The handsome beast is strapped into place after making its debut at the Art and Wheels Festival in Basel.

“We slept in here for a few nights,” Fabian says while pointing to a couple of mattresses stuffed into a cubbyhole behind the motorcycles.

The van stinks of petrol fumes and stale beer. I shoot Fabian a perplexed look. He grins like a lunatic and chuckles quietly to himself.

There is a story that dates back to 1945 that involves a certain Lloyd Olsen of Fruita, Colorado.

His mother-in-law, who wanted a chicken to cook for dinner, sent the young man to the farmyard but his attempt to fell the bird failed and Mike the chicken survived the ordeal, minus his head.

Mike soon became Miracle Mike, as the Wyandotte clucker managed to live for 18-months without a head, his owner Lloyd feeding him with an eyedropper through the hole in his throat. 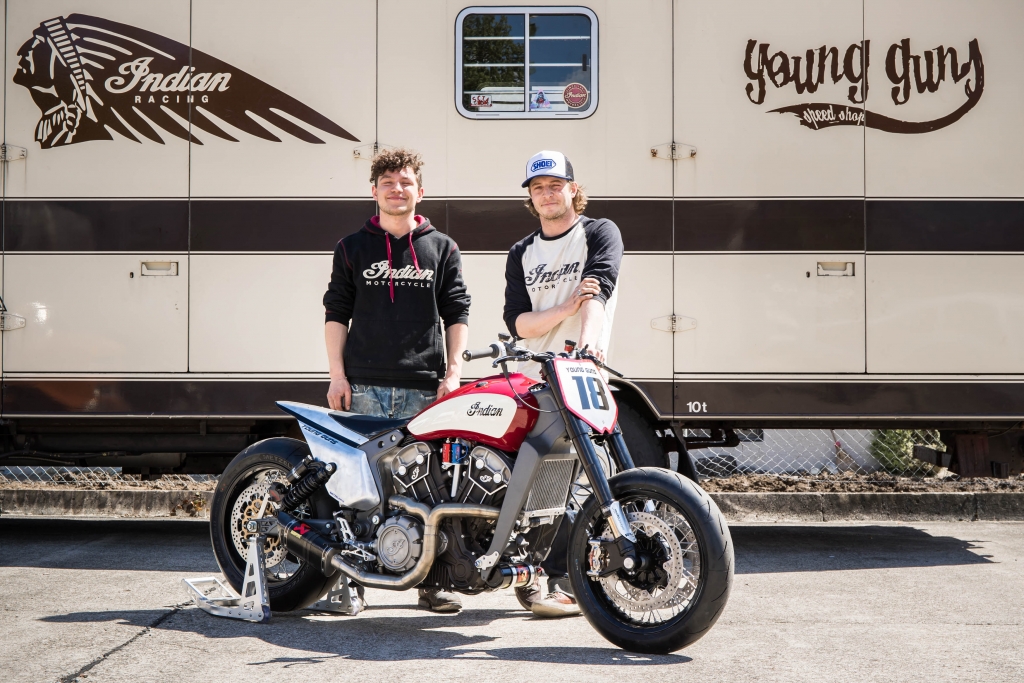 Mike made his owners extremely rich and this curious tale became the basis and namesake of The Young Gun’s most recent scheme.

“We want to beat the big manufacturers, like BMW and Ducati, in a sprint race,” explains Nik. “Those guys have got huge budgets and resources but we think we can take them. It will be totally unexpected,” he adds.

The boys have teamed up with Indian Motorcycles, who have kindly donated one of its new Scout models and freed up resources for some major adjustments. 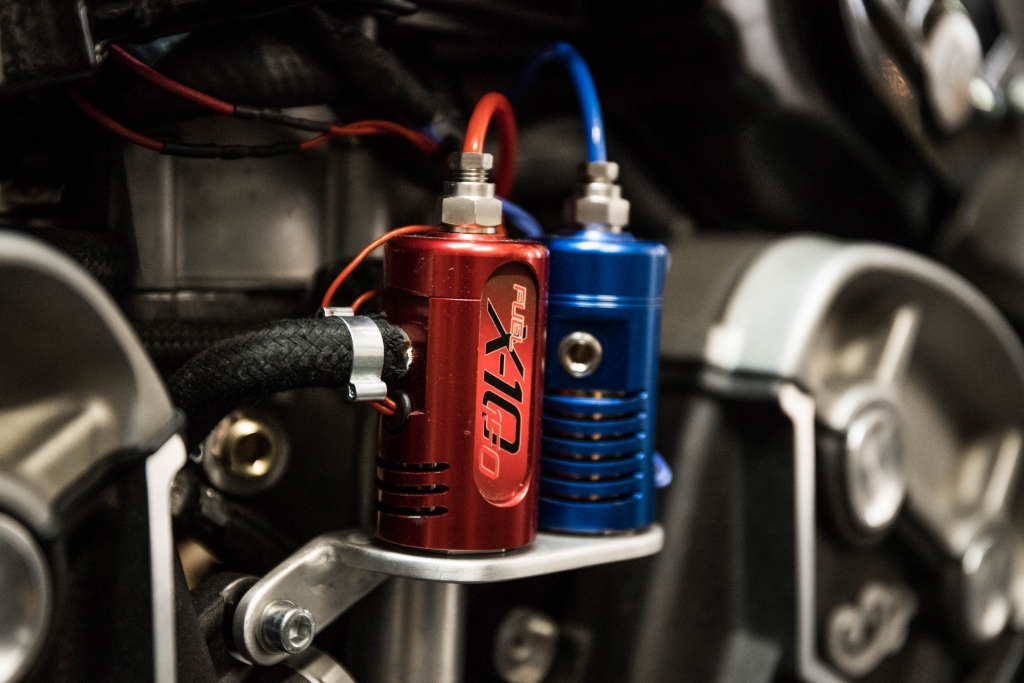 Those ‘tweaks’ include moving the fuel tank to underneath the seat in order to house the electrics required to power a state-of-the art nitrous system.

Yup, the boys love to mess with NOS and Miracle Mike follows in the footsteps of their successful Ferdinand the Sparrow project.

The stretched sprint racer features a 1200cc engine, transplanted from a 2007 Moto Guzzi Norge and built in collaboration with the University of Stuttgart.

Germany’s brightest engineers helped the pair develop a NOS system that saw the bike run the 1/ 8 mile in just 5.6 seconds. 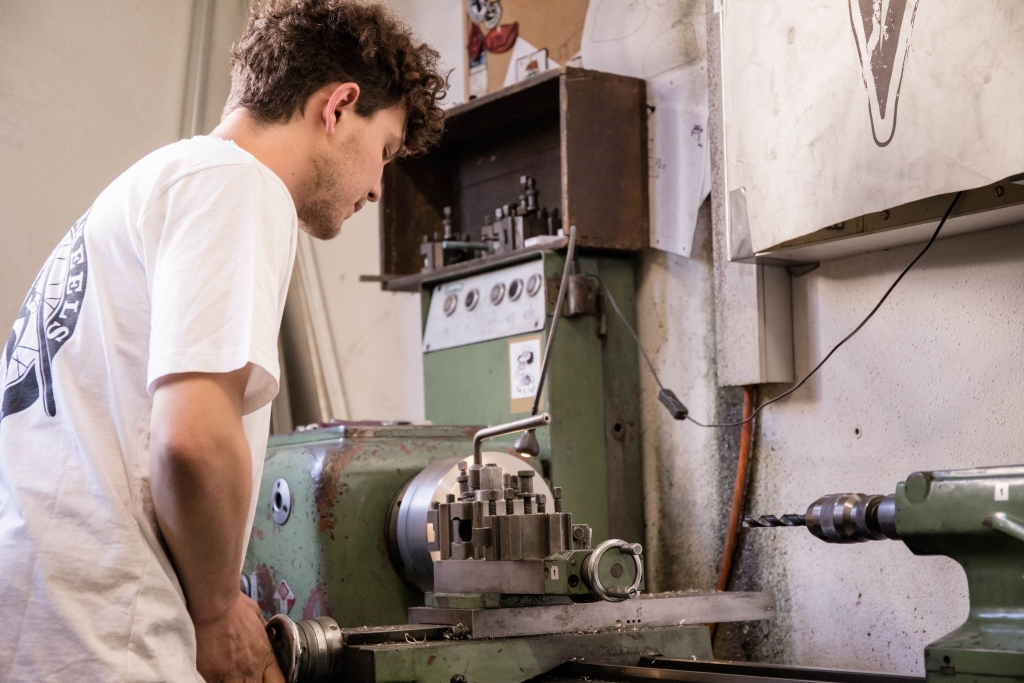 Naturally, the boys secured the Sultans of Sprint Championship (smashing their main rivals the Lucky Cat Garage) but Ferdinand has plenty more left in the tank.

“We want him to become the worlds fastest Moto Guzzi in history,” explains Fabian.

“Hopefully you will see him at the Bonneville Speed Week this year but there’s just so much going on”. 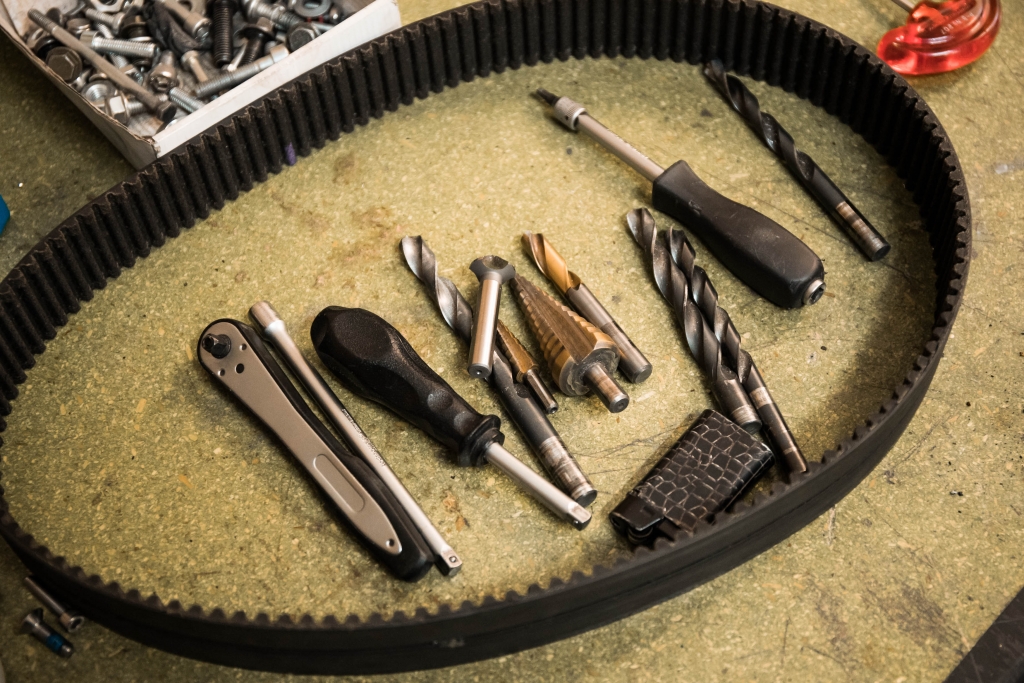 Fabian isn’t fibbing, because Miracle Mike will also be entering the Punk’s Peak race at this year’s Wheels & Waves festival in Biarritz, while the boys want to continue with a full racing season.

Despite the packed schedule, the lads find time to fit in some finishing touches on a friend’s Triumph and some great local food and a few bottles of ice-cold lager with their guests.

The location for the evening’s festivities is a small island in the middle of Lake Zurich, which is only reached by boat. 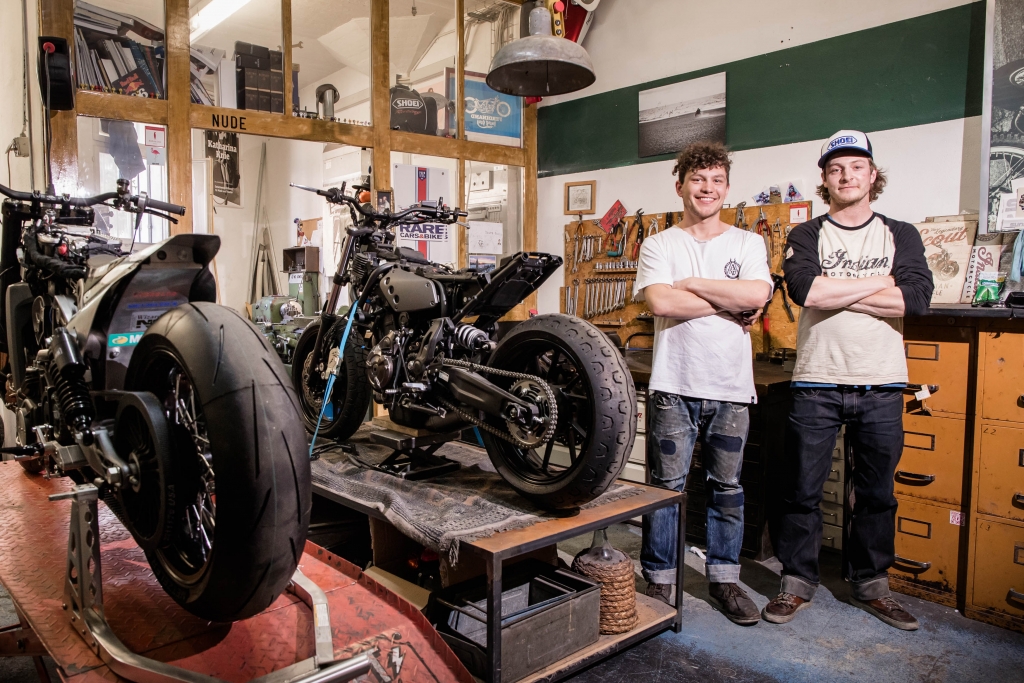 As we putter across the water, the dinghy weighed down by The Young Guns and a few friends that have come along for the ride, the sun dips behind the mountains and it’s impossible not to be blown away by it all.

“We have no real plans for the Young Guns Speed shop,” Nik explains as he guides the boat across the calm waters.

“We have it all here and as long as we have enough to keep the shop running, we will continue to work on these crazy projects,” he adds.

‘Borderline Boys’ was filmed and edited by Jonny Fleetwood. You can watch the video in full over on Flat-Out’s YouTube channel now.