Call me masochistic but when you get a phone call asking if you want to cycle up the infamous Mont Ventoux, you don’t refuse. Well, you might, but I certainly wasn’t going to let this particular opportunity slip.

As a keen cyclist, pitting myself against one of the Tour de France’s most iconic high mountains has been a long-held ambition and now I had been presented with the opportunity to tick it off the list.

Now though, with less than 24 hours before I’m due to crest the summit of ‘The Giant of Provence’ alongside a handful of similarly-deranged journalists, I’m not so sure this has been my best laid plan.

“My hubris has ebbed away, along with the power in my legs, on the surprisingly steep lower ramps of the Alpe d’Huez”

It’s got nothing to do with the fact that my mileage in the saddle for the year so far has been a measly 60 miles. After all, the human body is capable of remarkable feats of endurance without a strictly adhered to training regime?

Instead, my hubris has ebbed away – along with the power in my legs – on the surprisingly steep lower ramps of the Alpe d’Huez. Yep, that other famous mountain climb regularly tackled by the world’s greatest cyclists in the Tour de France.

Why do I find myself riding up another Alpine ascent less than a day before attempting to climb the infamous mountain that claimed the life of Britain’s first World Road Racing champion, Tom Simpson?

Up the wrong mountain 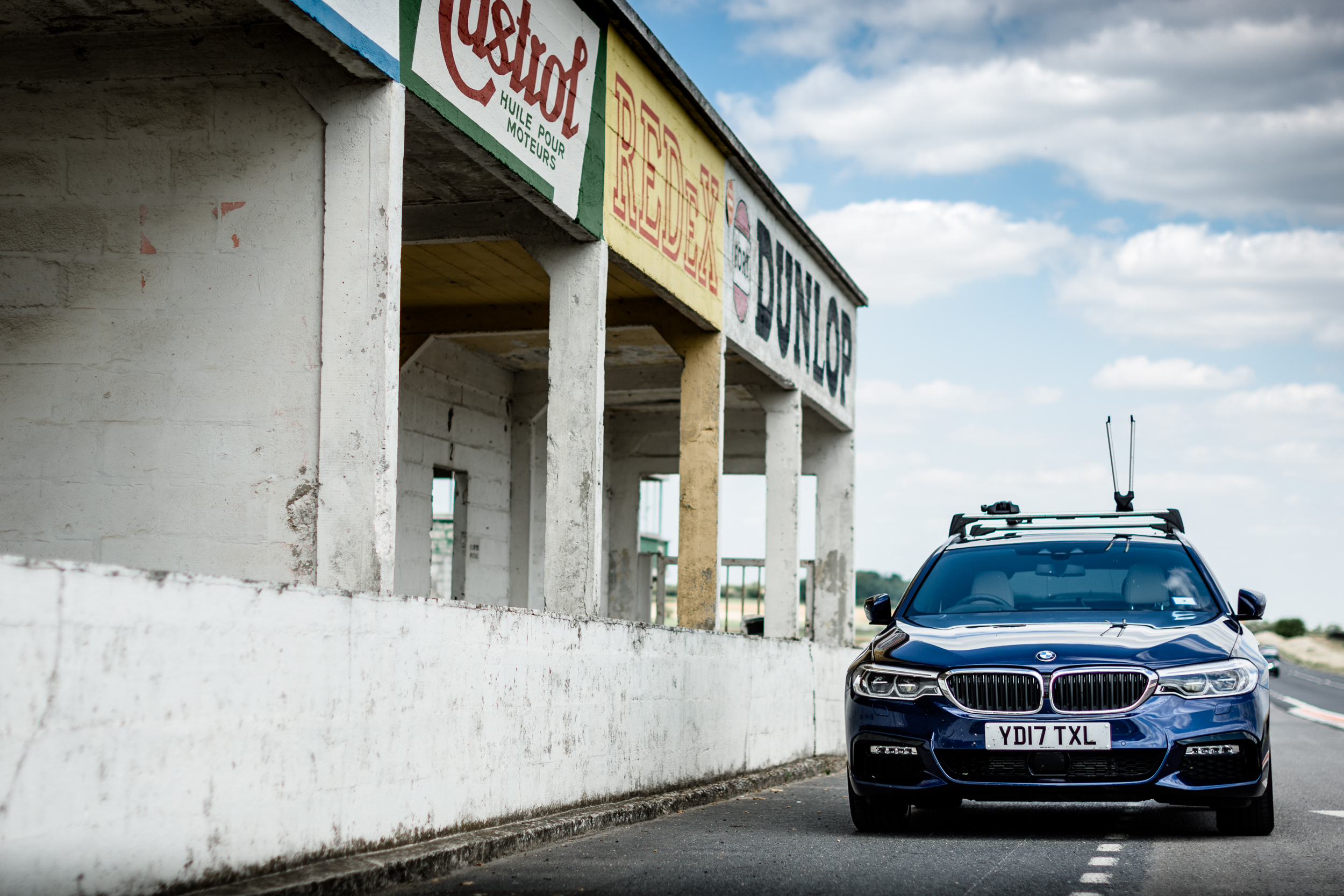 BMW provided the aforementioned phone call, explaining that I’d need to road trip down through France (at my leisure) alongside Mr Binnie in one of the new estate-bodied 5ers. So far, so good.

Not needing to be in our pre-Ventoux base of Mazan until just before dinner tonight [Sunday], we set off from a drizzly Heathrow on Saturday morning, hitting the continent just after lunchtime and promptly filling the 530d M Sport Touring with a plethora of French biscuits, breads and pastries.

After all, two vastly underprepared amateur cyclists need their fill of carbohydrates. 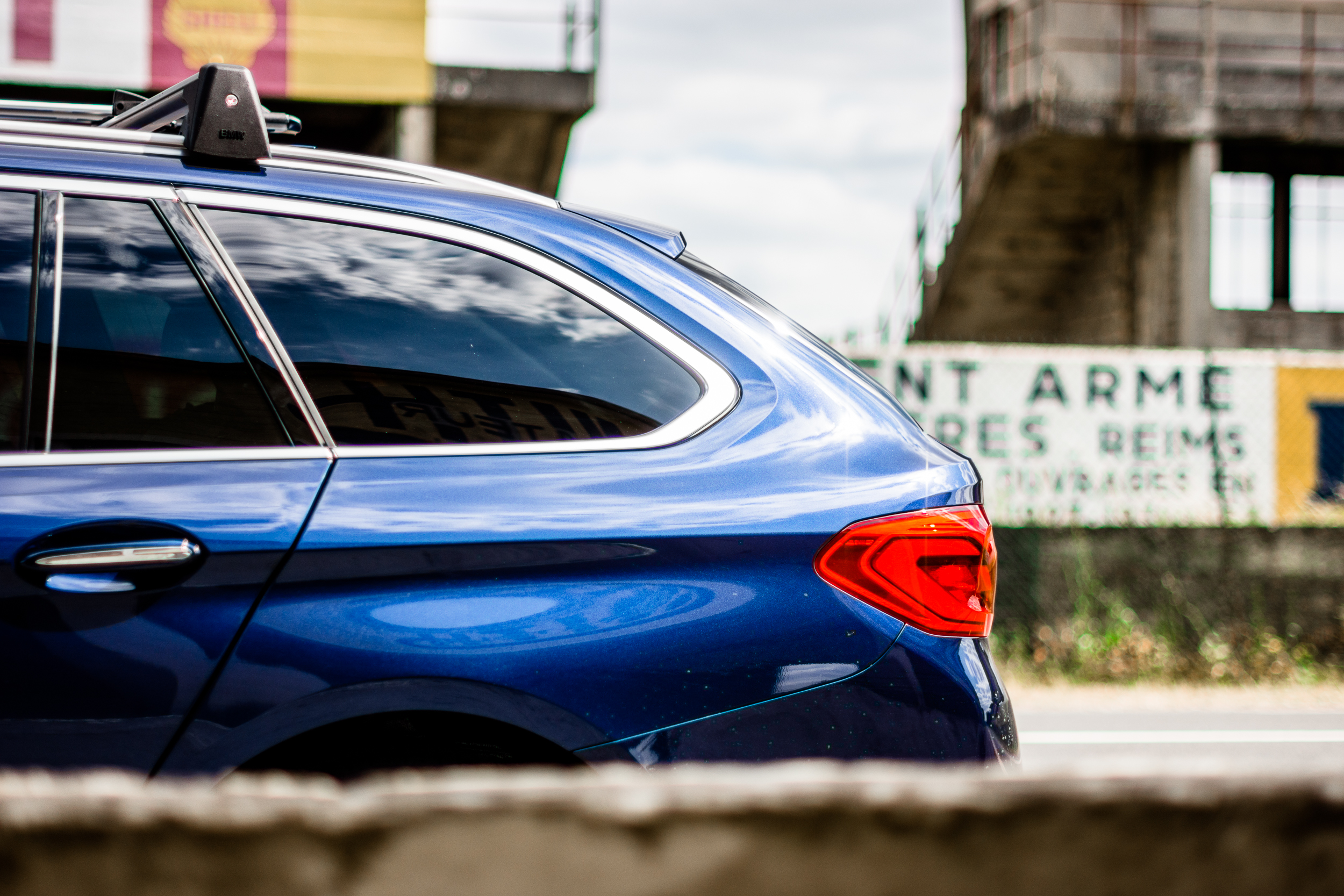 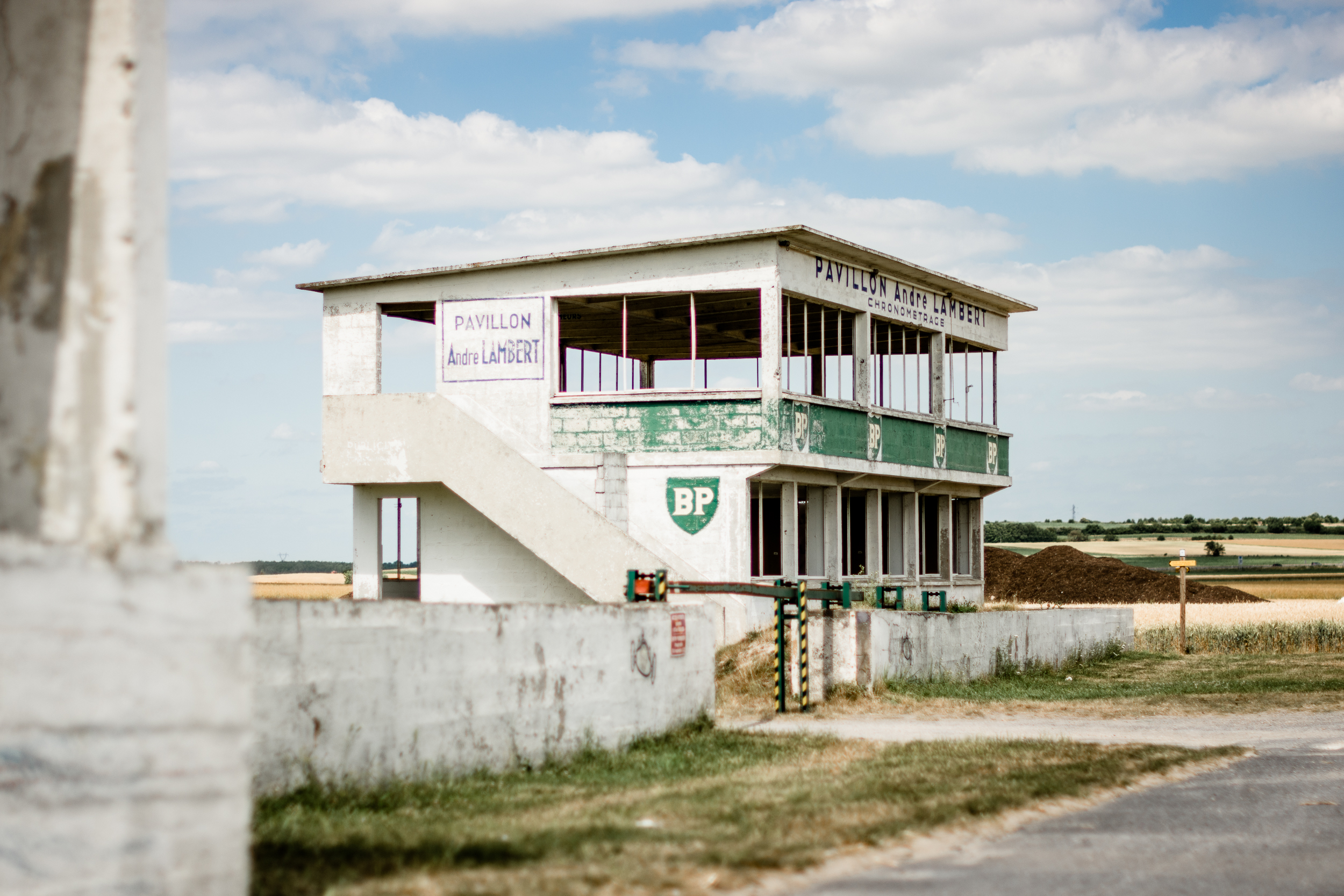 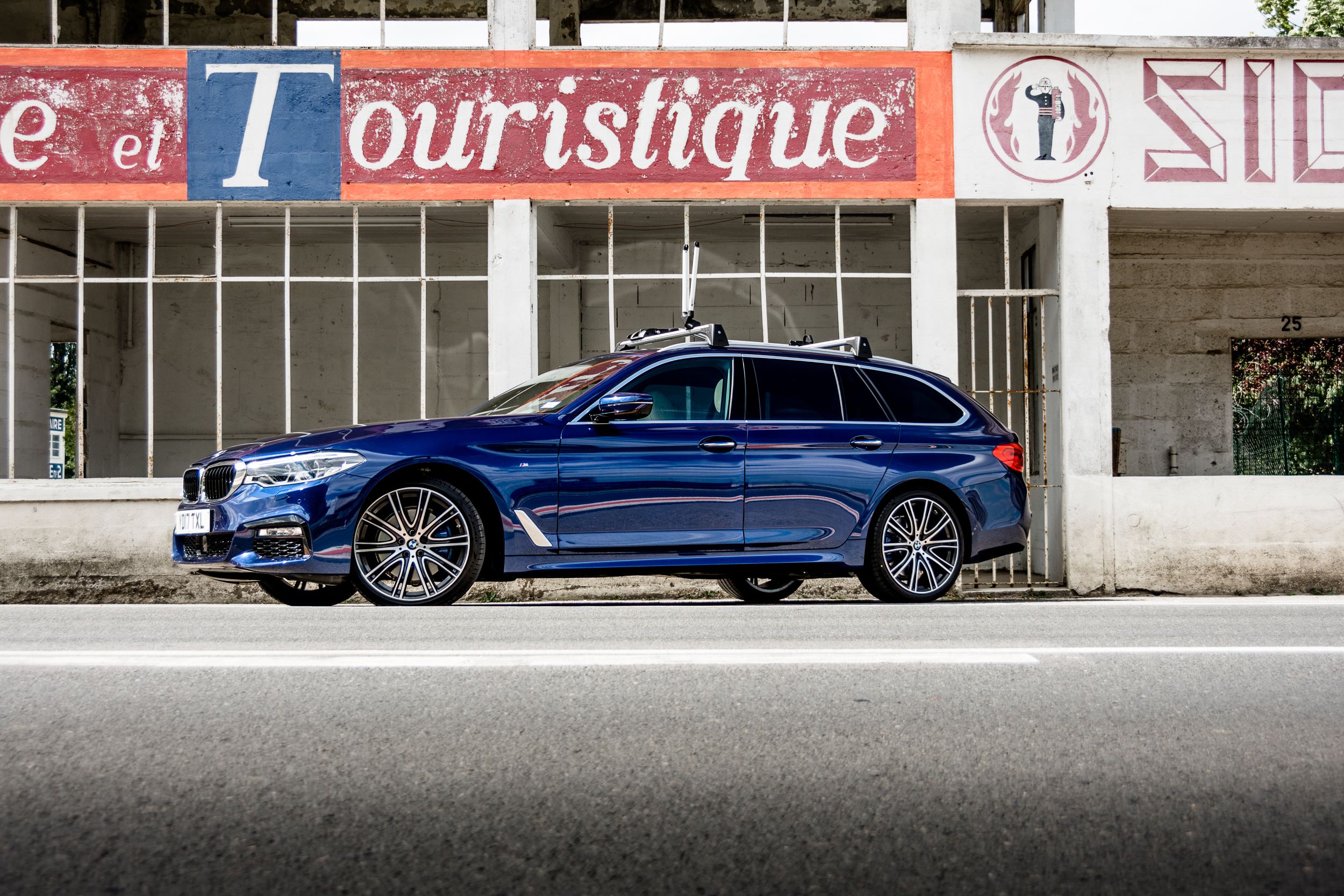 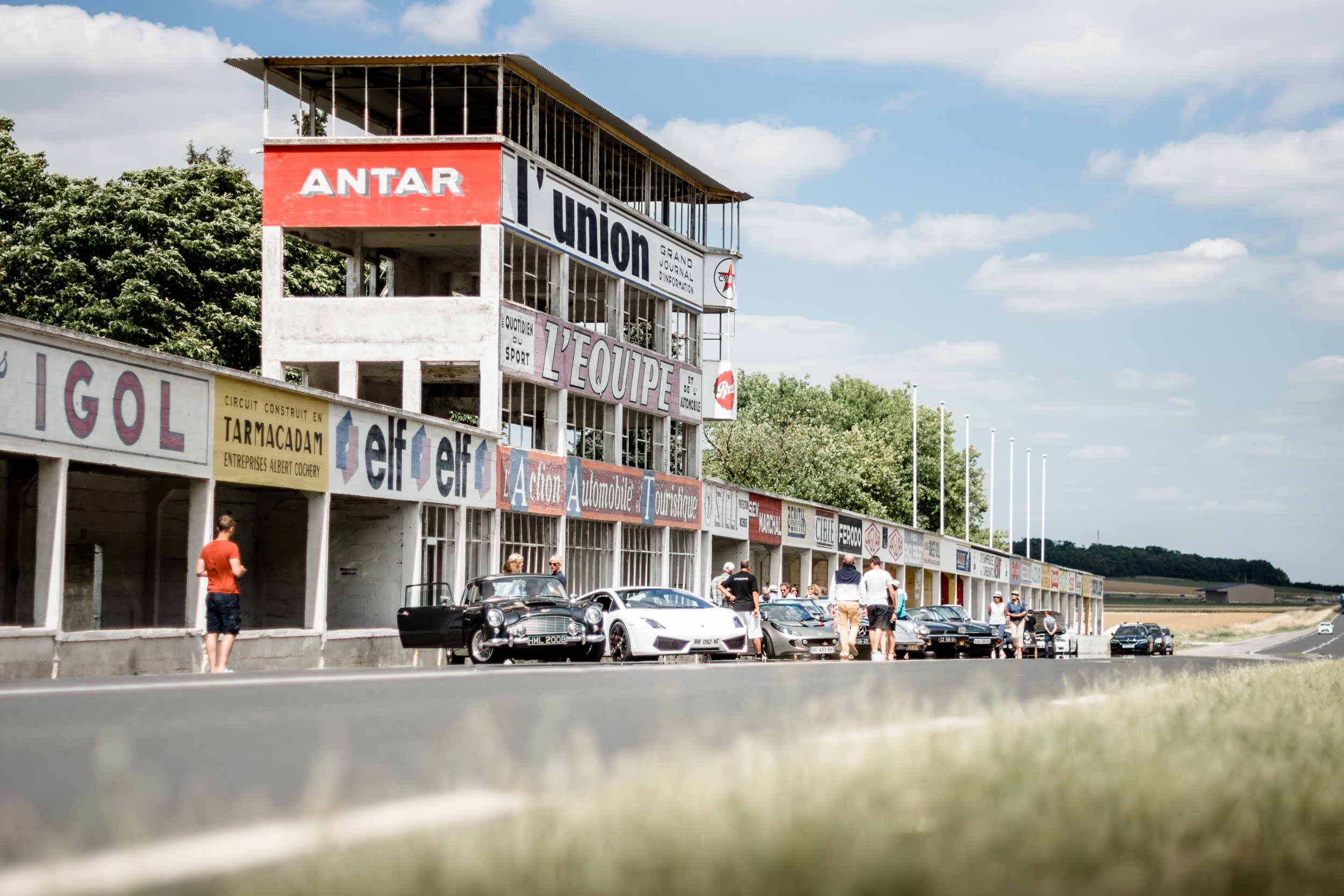 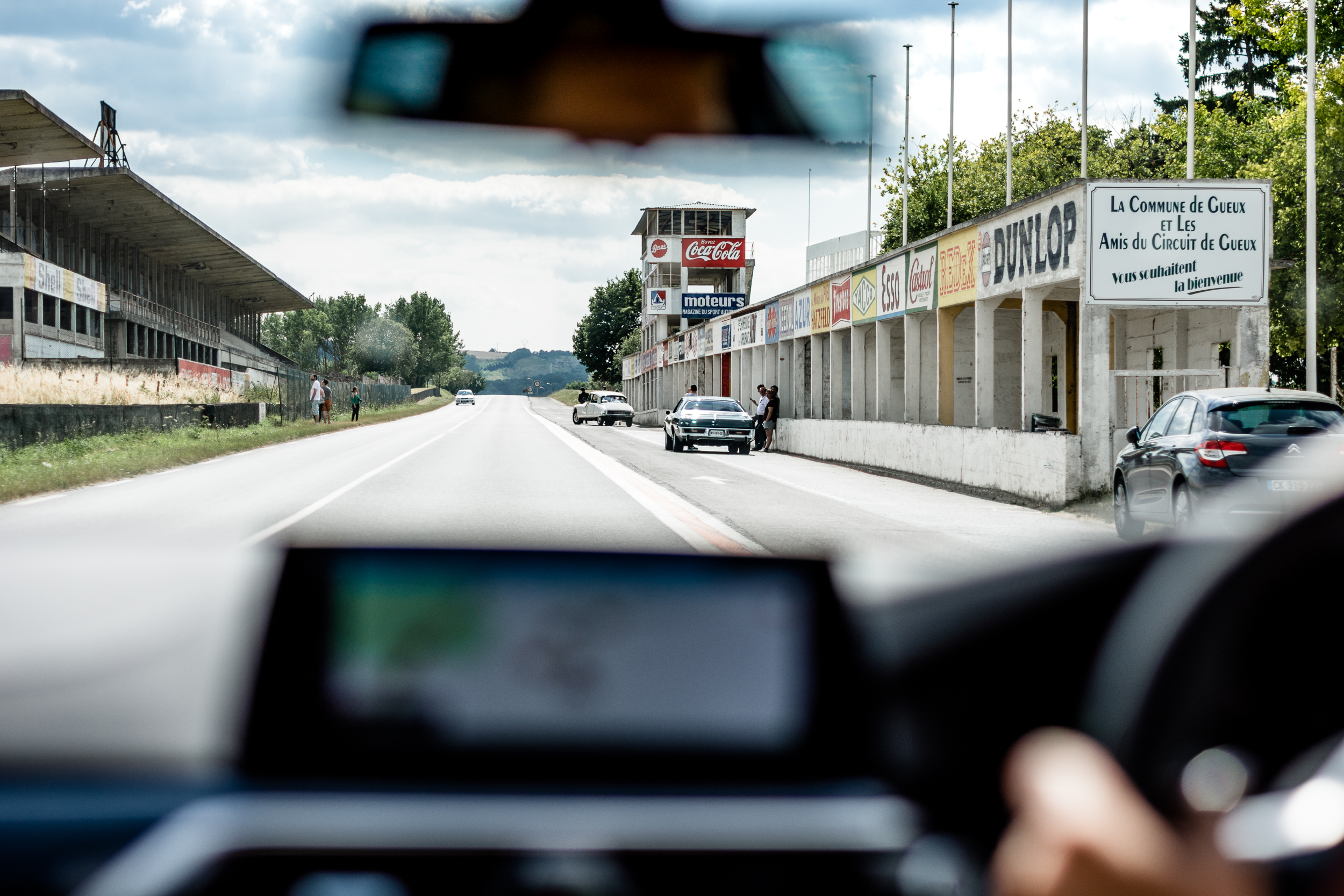 The afternoon included the obligatory pilgrimage to the old Circuit du Reims-Guex pits (gate-crashing the remnants of Belgian car club meet in the process) before we smoothly schlepped down a succession of deserted péage to Dijon, where we intended to find some overnight accommodation.

After little luck at the first two establishments, the as-standard WiFi hotspot inside the 5 Series came to the rescue on Saturday night, allowing me to book a couple of hotel rooms via my laptop while Adam navigated the supremely comfortable 530d through the outskirts of the Burgundy capital.

“We realise that, beyond Reims, neither of us had any coherent plans for the journey to Provence”

Escaping the hustle of bustle of Dijon early the next morning, we grabbed breakfast from a provincial boulangerie before exploring some of the fantastic driving roads situated in nearby valleys.

The latest 5 Series Touring may have been a little large to be chucked around the twisting tarmac of the D10, D104 and D35 but, as with the saloon version, the 530d M Sport makes for a surprisingly engaging drive, even when the boot is loaded up with my trusty Cannondale Super Six Evo (I was too precious to mount it on the roof rack). 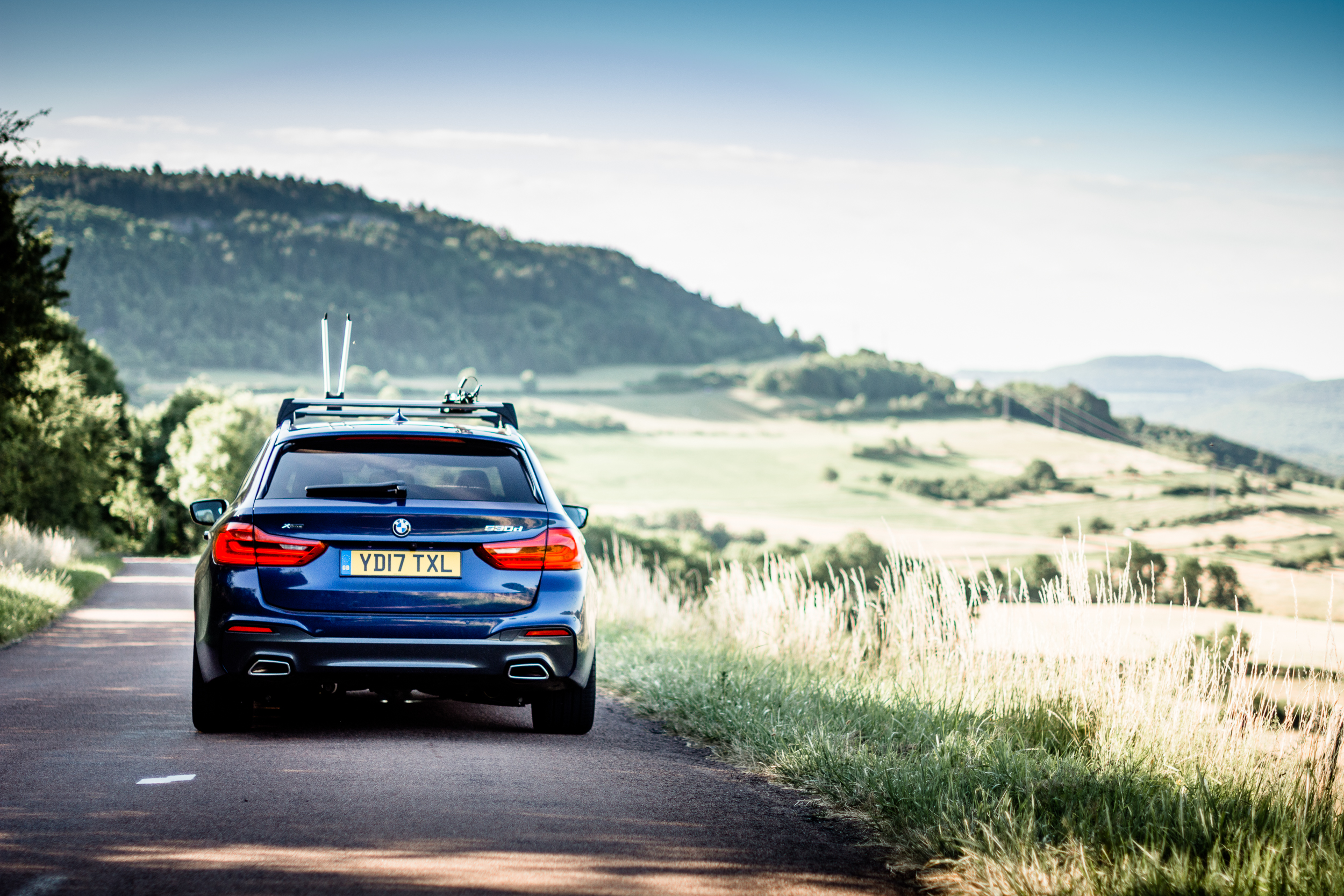 By 10am on Sunday morning, and with nine hours still to kill before dinner (of which only four of five would be taken up actually driving to Mazan), we realised that, beyond Reims, neither of us had any coherent plans for the journey to Provence.

And then I mentioned that before setting off for France I had quickly looked at Google Maps to see if a diversion via Alpe d’Huez was possible. I had concluded it wasn’t but Adam’s interest had been piqued.

“Why not?” came his response, followed by a hastily redirected route being tapped into the 5 Series’ sat-nav. To be fair, the numbers that came back – factoring in the BMW’s live traffic updates – just about added up and so we brimmed the tank with diesel and rocketed towards Bourg d’Oisans at the base of Alpe d’Huez arriving just after 1pm. 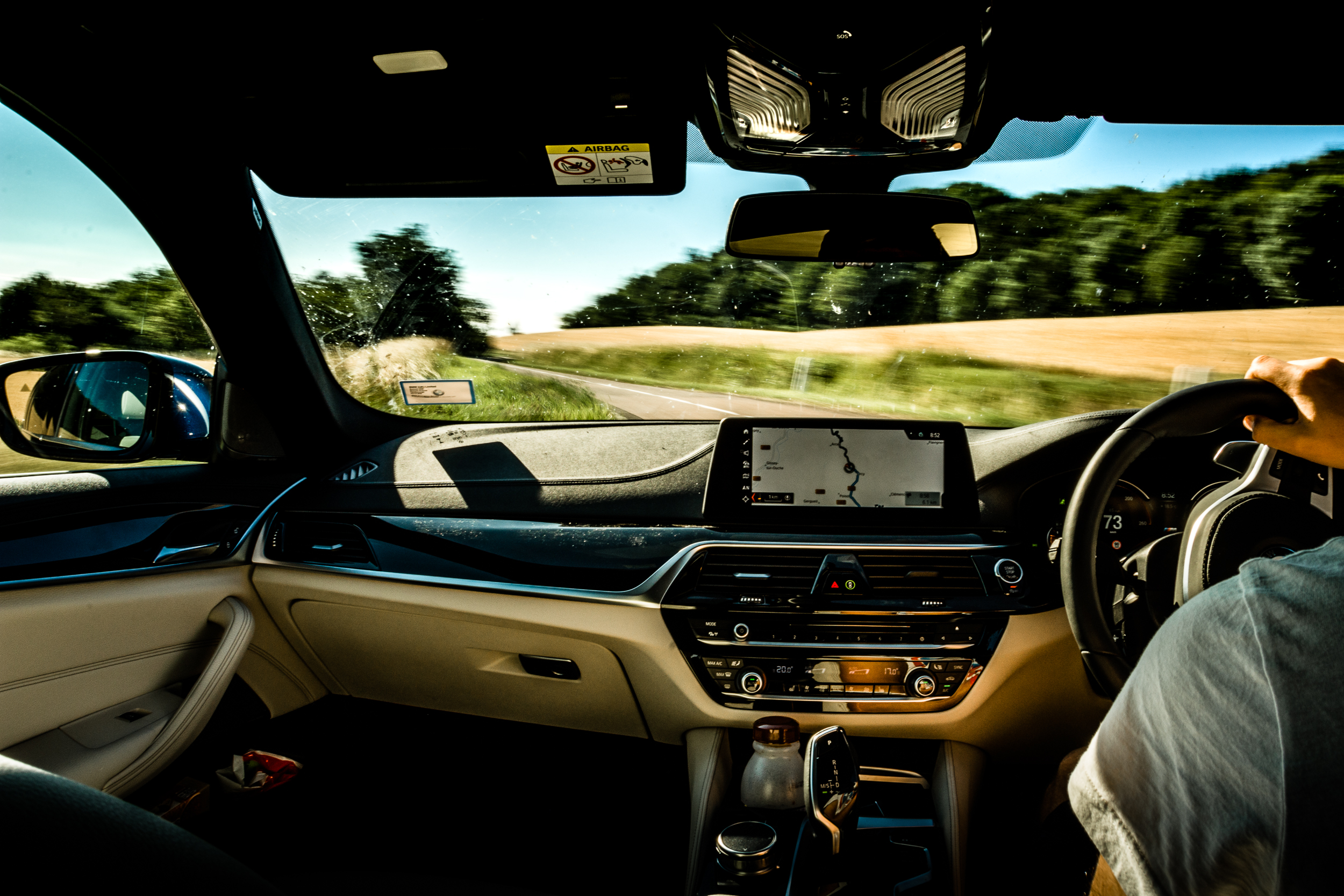 A rapid change into my lycra is followed by a measly one-kilometre warm up along the flat road from Bourg d’Oisan’s centre to the base of Alpe d’Huez before the road suddenly ramps up to a gradient of over 11 per cent.

This is where you now join me. The early slopes have been brutal – especially in the 31-degree heat – however, now that I’m well into the succession of hairpins, I’m finding a little bit of rhythm.

Adam has shot passed me a few times in the 5 Series, understandably enjoying the switchbacks from his air-conditioned pew but, thankfully, he is also acting as my ad-hoc support car, providing me with a fresh bottle of water just after the halfway mark.

Despite this, as I round the final few hairpins (and finally set eyes on the ski resort at the summit), both my bottles run dry and I’m faced with a liquid-free final two kilometres. 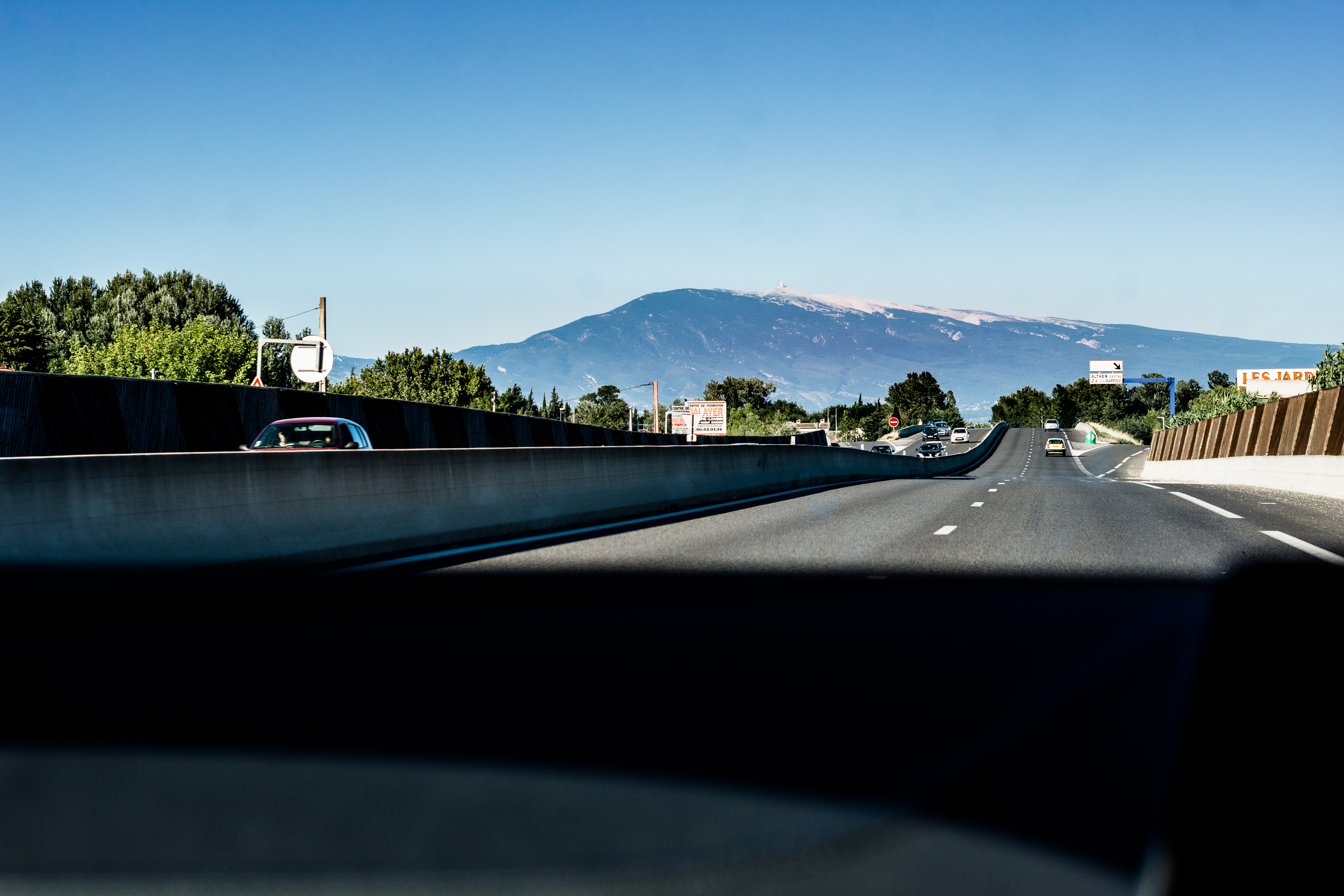 After an hour and 20 minutes, I finally reach the top and am immediately greeted with a crippling cramp in my right calf muscle that requires Adam to unclip me from my pedals. It’s hardly the heroic finale that I had envisaged.

It is, however, quite an introduction to the high mountains, not that there’s much time to soak it all in. After descending in less than 20 minutes and promptly collapsing into the 5 Series’ passenger seat, we just make it on to Mazan for a well-earned dinner of pasta and fillet steak.

“Adam helps to unclip me from my pedals. It’s hardly the heroic finale that I had envisaged”

Meeting up with the other journalists-cum-riders for tomorrow’s Ventoux-based adventure, it turns out their respective trips south have been much more mundane. Their disbelief (and, I hope, mild respect) at my madness helps to quell some of the tiredness in my legs as it begins to dawn on me that I have it all do again in around 12 hours’ time.

What’s more, Mont Ventoux – at 21 kilometres – is around 50 per cent longer than the Alpe’s 13.8-kilometre ascent and should take me around two hours to complete. Is that a twinge of cramp I feel in my right calf again as I try and drift off to sleep? 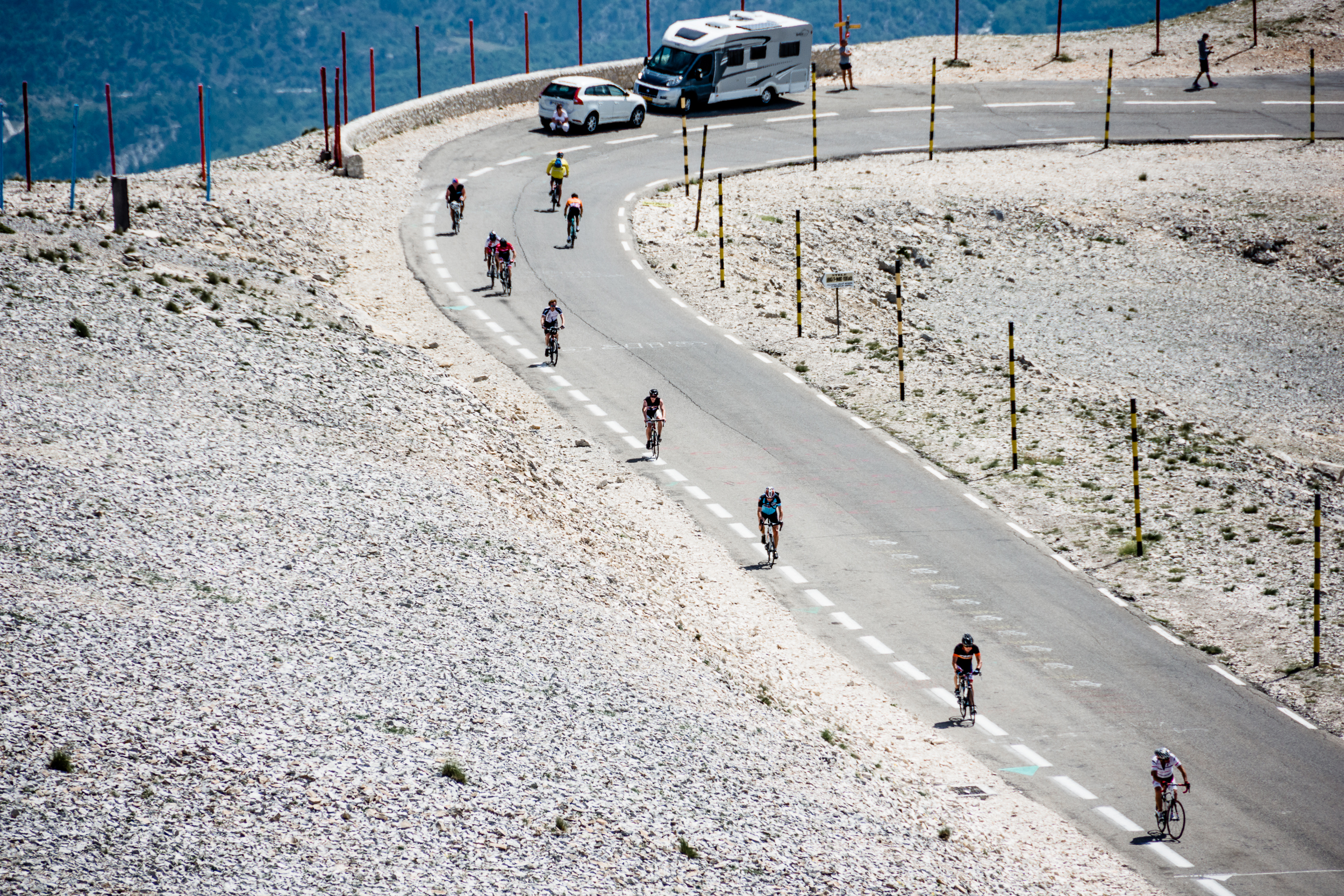 Monday morning. D-Day. Or should that be V-Day? Either way, it’s time to ride. Unlike my effort on the Alpe yesterday, today we have the full support of Rapha Travel, led by the boundlessly enthusiastic (albeit dryly sarcastic), James Heraty.

He explains that he’ll be in one of the two BMW 530d Touring support cars, helping to provide the full pro cyclist experience. If we want a fresh bottle of water of energy drink, we just have to call for it.

What’s more, our bikes have all been given a once over by one of the Rapha Travel mechanics (who, when not helping out on these premium cycling holidays, works for a UK-based pro team) and our mini peloton will be guided by Canadian former pro, Alison Testroete. 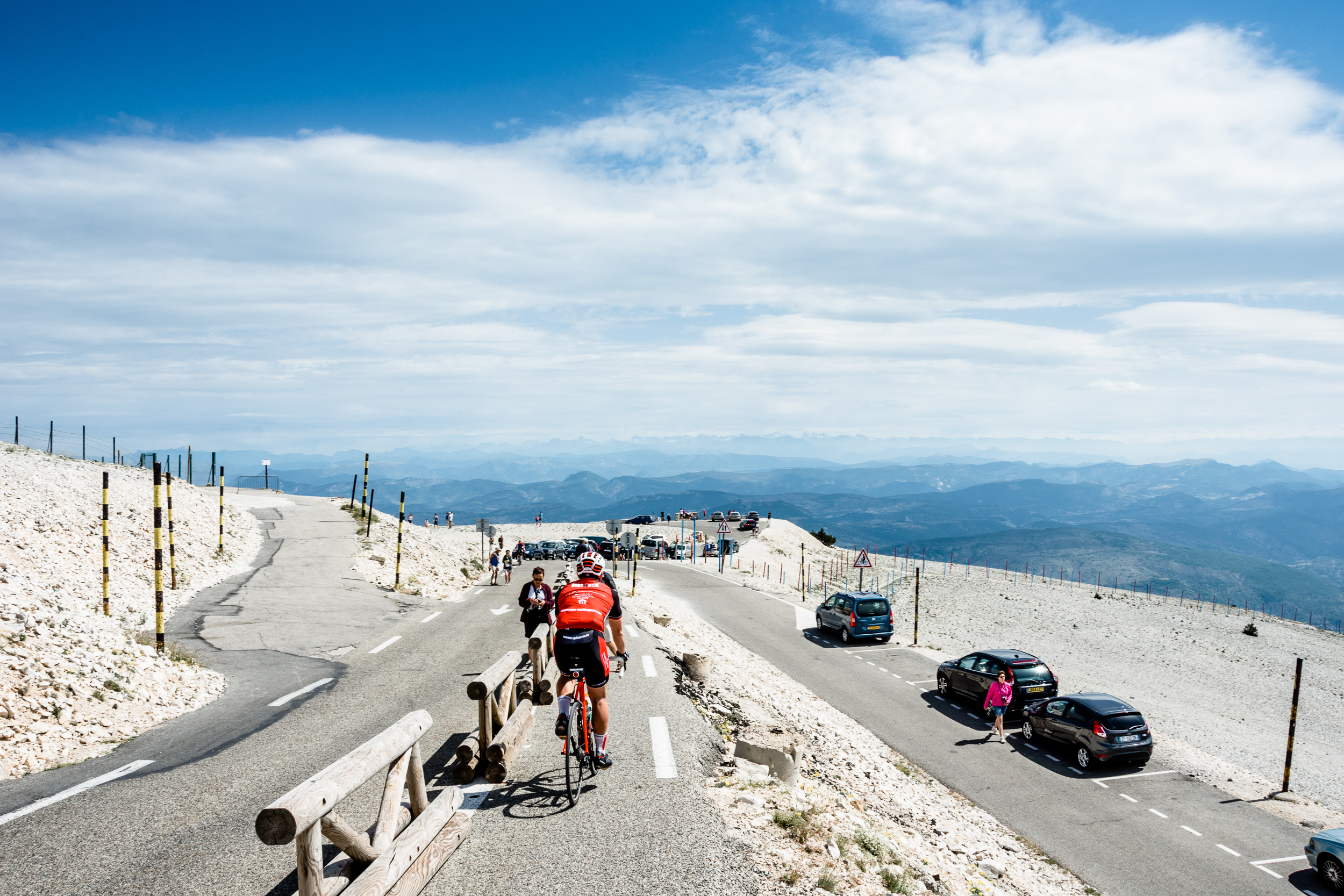 Initially, the pace she sets away from our base at the Château de Mazan is more than comfortable but, as we begin the climb in earnest just after Bedoin, I realise a little too late that sitting on her wheel is burning a few too many of my proverbial matches.

Recovering my composure and settling into an easier rhythm, I glide alongside a cherry orchard where some local labourers are already up ladders harvesting the fruit.

“Only the encouraging cries of “Allez, allez!” amongst the snaking train of cyclists break the silence”

It’s an idyllic setting yet the hulking black mass of Ventoux is ominously looming over my left shoulder, seemingly inescapable until I disappear into the famous forest on the mountain’s lower slopes just after the hairpin at Saint-Estève.

The early morning coolness has given way to a stifling heat and, surrounded by the green pines and massive oaks of the Fôret Domaniale du Ventoux, I quickly lose all track of time. 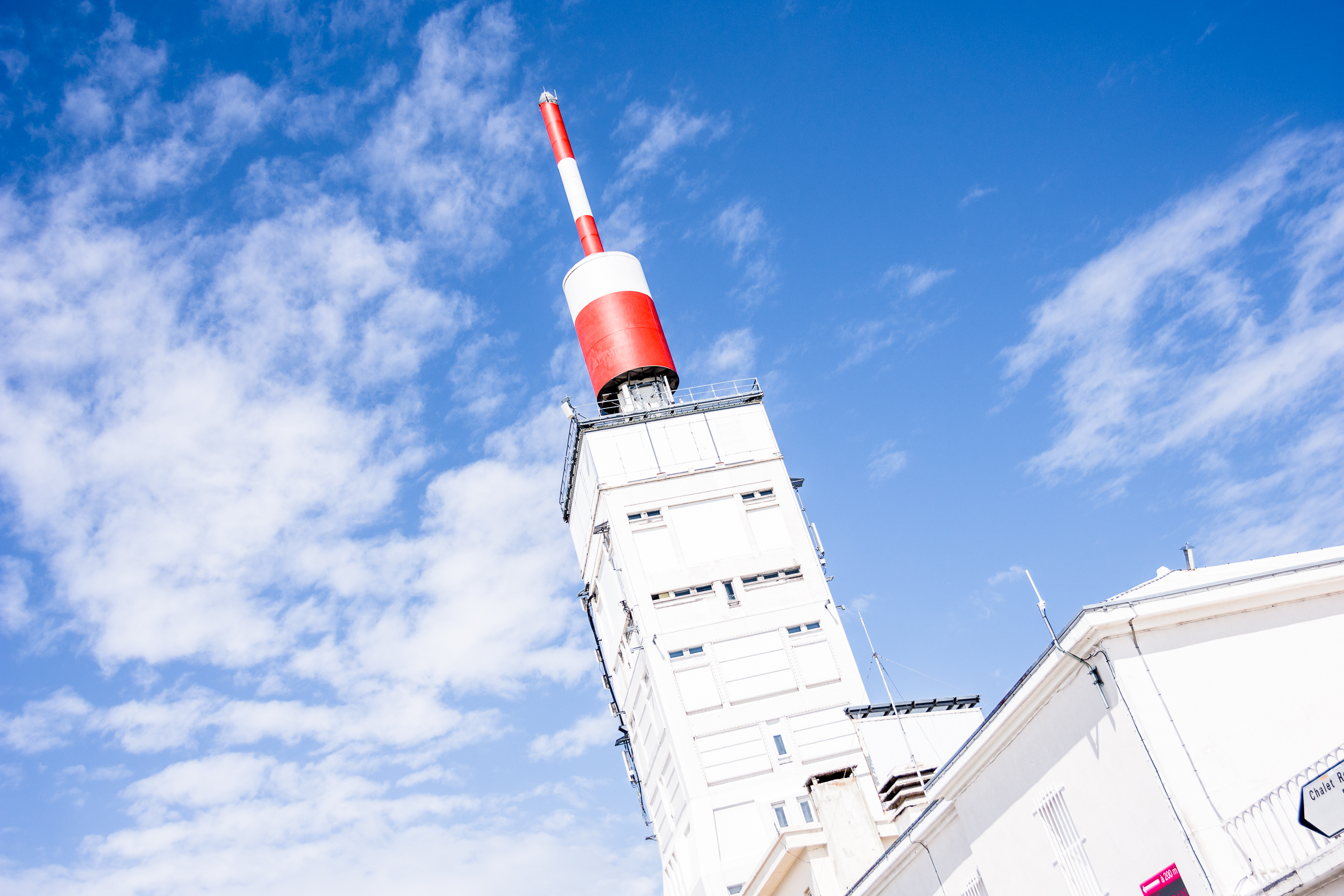 Without time, the suffering of the persistent gradient becomes endless, the uniquely enjoyable monotony only broken by occasional top-ups from the Rapha support cars and a cameo appearance by one of the French Air Force’s Mirage jets, roaring briefly overhead and then disappearing out of sight behind the vast canopy of coniferous trees.

Eventually the forest gives way to the sight of Chalet Reynard. Six kilometres to go, and I know the gradient finally relents on these upper slopes, the iconic moonscape.

Known for its infamous wind (Mont Ventoux literally translates as ‘Windy Mountain’), conditions are thankfully still up here. Only the encouraging cries of “Allez, allez!” amongst the snaking train of cyclists break the silence.

Despite the pro team treatment from the Rapha Travel crew, fatigue has now finally found me, to the point where I don’t even notice the memorial to poor Tom Simpson just over a kilometre before the summit. I shall pay my respects on the way back down. Instead, it takes all my focus and energy to move forward (and upwards) over the final, cripplingly difficult, final 1,000 metres.

Agonisingly slowly, I roll into the top car park, only my relief at conquering the mountain preventing a collapse into my carbon fibre-framed bike. It’s a perfectly clear day too, so the outstanding, otherworldly vista over Provence and the Alps helps to bring some feeling of normality back into my legs. Well, at least enough to stand up unassisted.

Without the support of James and Rapha team, I seriously doubt that I would have managed it (especially after yesterday’s similarly skyward exertion). In fact, having worked my way through the best part of three litres of drink, I don’t know how you’d manage a giant like Ventoux unassisted.

Fancy testing yourself against some of the world’s toughest cycling climbs? Check out Rapha Travel’s 2018 calendar of tours and trips now.

The best vintage steel from the classic cycling celebration