There’s clearly something in the Californian water supply, because it is very rare that a conversation with one of the State’s many ultra-intelligent tech entrepreneurs doesn’t lead to talk of revolutionising industry or, more often than not, saving the planet.But that’s the difference between those who genuinely harness technology with a view to change the world and us mere mortals who struggle to set up a new smartphone without wanting to throw it against a nearby wall.

Speak to Kevin Czinger, the man behind the latest Czinger 21C hypercar, and it is not long before conversation takes a trip down this well-trodden path, as this a man who would rather bemoan the current method of building cars – dubbing it massively outdated and hugely harmful to the planet – than chat about the gob-smackingly fast hypercar he and his team have fashioned from scratch. 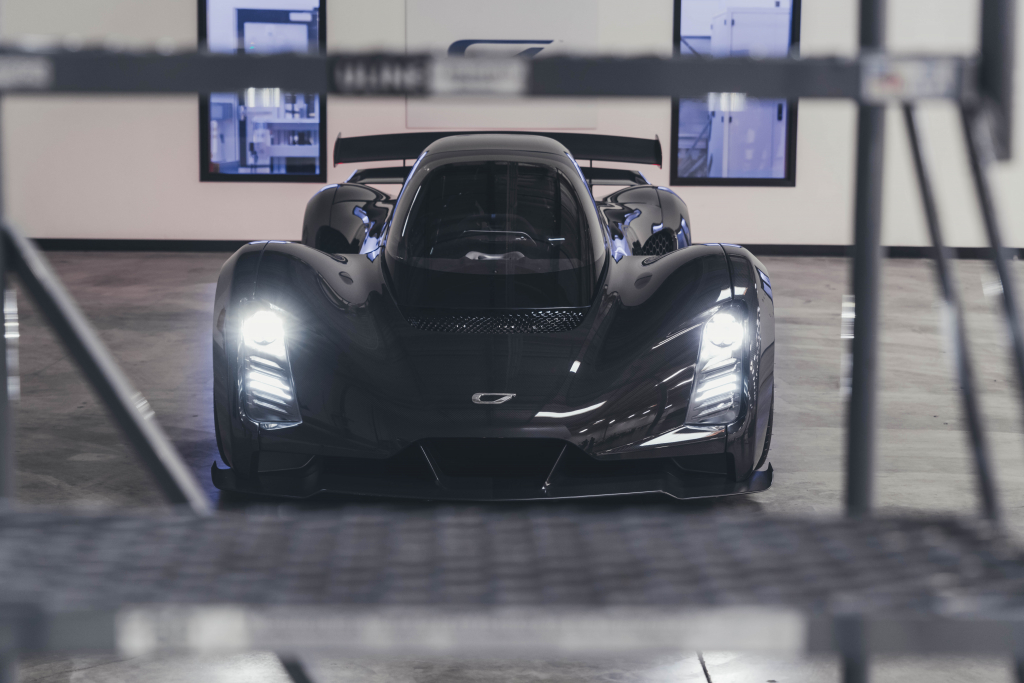 To do this, Kevin Czinger has invested many years and over $150 million dollars into advancing computer-driven optimisation and additive manufacturing methods that he thinks will create lighter, stronger and better performing components without the energy and material demands of current mass production processes.

“The 21C is really the first instance of a complete vehicle that uses generative design. To create what we have here, we first had to think up and build a completely unique set of revolutionary tools that allowed us to take the ideas that are up in our heads and actually express those digitally,” he says as we take a tour of the new Czinger facility in Torrance, a small coastal town in the South Bay region of Los Angeles County.

But perhaps the most cutting-edge aspect of his new car is the platform upon which it is based, as this is the first real instance of an automotive manufacturer using an entirely 3D-printed chassis. Where other hypercar makes are still creating a carbon tub (considered hugely advanced only a few years ago), Czinger’s chassis is produced using additive manufacturing methods, so it can be continually adapted throughout the design and prototype process.

Walk around the LA-based HQ and the brightly-lit space is clean and sparse, with the athletic, menacing and immediately attention-grabbing 21C sat proudly in a corner for this special sneak preview. To the left is a roped-off area that houses a group of robots arranged in an innovative circular formation, rather than the traditional production line we’ve come to expect from the world’s biggest automakers.

Our guide kindly asks us to refrain from taking photographs of the robots, especially their tips, as this is the IP that Czinger is very proud of creating and one of the key elements that makes the company unique. Revealing this to the world could, apparently, allow others to follow suit.

As a result, any robotic theatrics are off the cards for the time being, presumably so we don’t glean too much information on the processes involved, but the way they interact with one another is, according to our hosts, what makes them really special. After all, more than 330 patents have been filed to cover the process in the short time it has been developed. 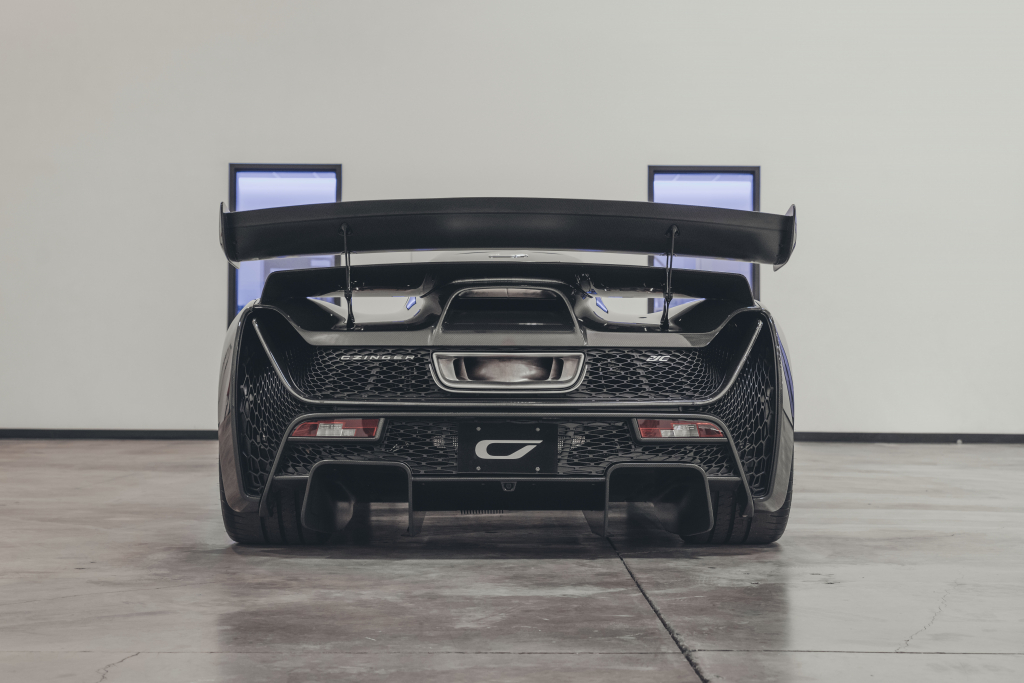 The ability to perform multiple tasks and pass elements of the product that is being assembled between robots will speed up production times, lower costs and dramatically reduce the energy density that’s required to make cars.

Behind the inanimate machines sits an ominous room, which emits a dim, oddly futuristic blue aura. Although we aren’t allowed anywhere near the space, it is clear that most of the advanced additive manufacturing takes place inside. Huge 3D printing machines hum away, crafting components out of aluminium, titanium and all manner of expensive materials.

Those with exquisite automotive knowledge may remember the Divergent Blade – a concept vehicle that made a brief appearance on Jay Leno’s garage in 2015 and is arguably the foundation of this project here. Divergent 3D, the additive manufacturing and robotic vehicle assembly system behind that early car, still very much exists, but Czinger now wants to make waves as an automaker, as well as impress with its innovative production methods. 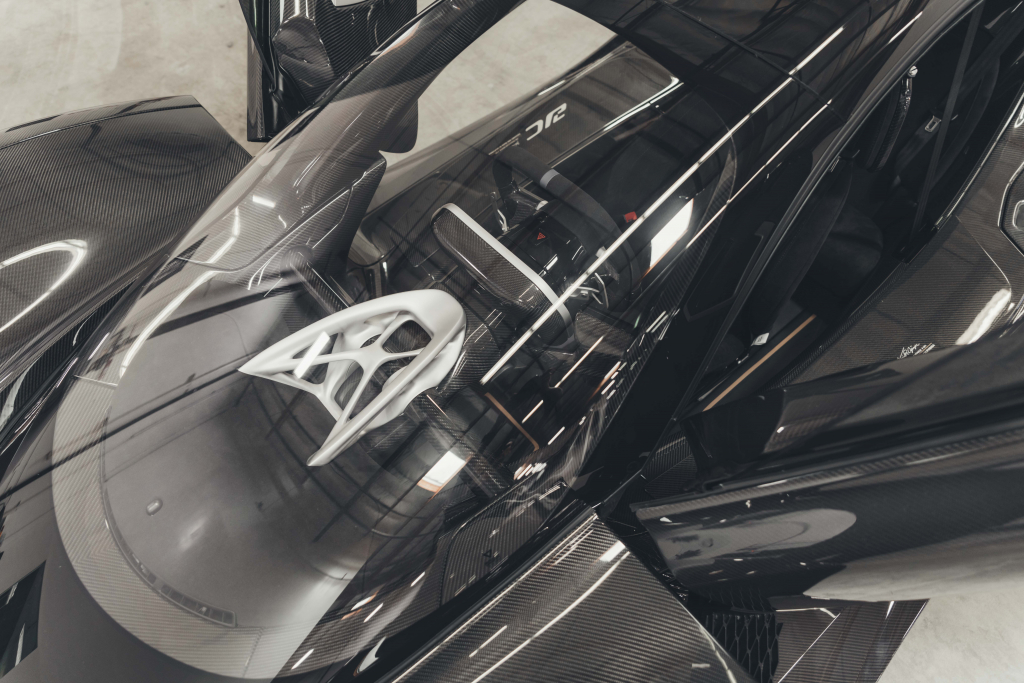 “We hope to take the current car design process and flip it on its head,” Kevin says. “To me, operations like Giga factories, or other huge scale operations where that scale is fixed to one or a few designs, feels like a cookie cutter approach. It’s not good economics and it’s not good for the environment.

“I think that in order to properly express human creativity, you have to have a team of people that can interact and work together with a platform that allows that creativity to be expressed and iterated immediately. That’s basically the antithesis of today’s global automotive structure,” he adds.

Czinger believes the the best way to bring this new technology to life is through the medium of a $1.7 million hypercar, because, in his own words, they are “awesome”. 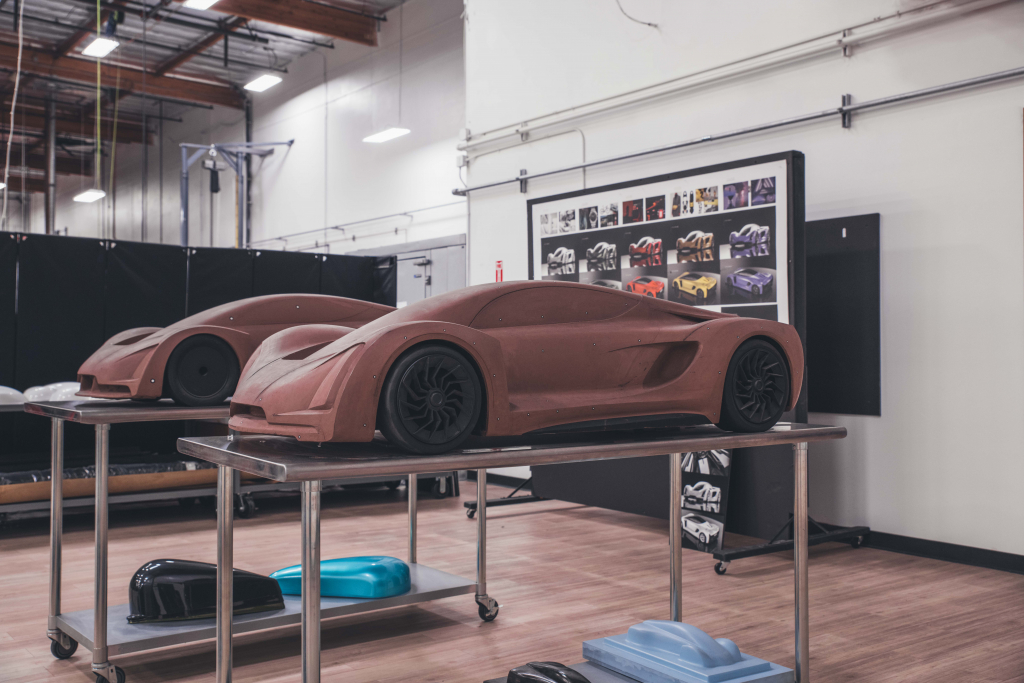 “They’re what the planet is built around. Look outside, parking lots, streets, cars, the entire structure of the modern world is built around the car and transportation,” he emphatically suggests when asked why he didn’t focus his attention to aerospace or other industries.

Kevin is a car guy, born and raised in an environment that clearly put anything with an engine and wheels at the epicentre of importance and for this project, Czinger surrounded himself with former employees of Koenigsegg, Rimac and other giants in the hypercar world. 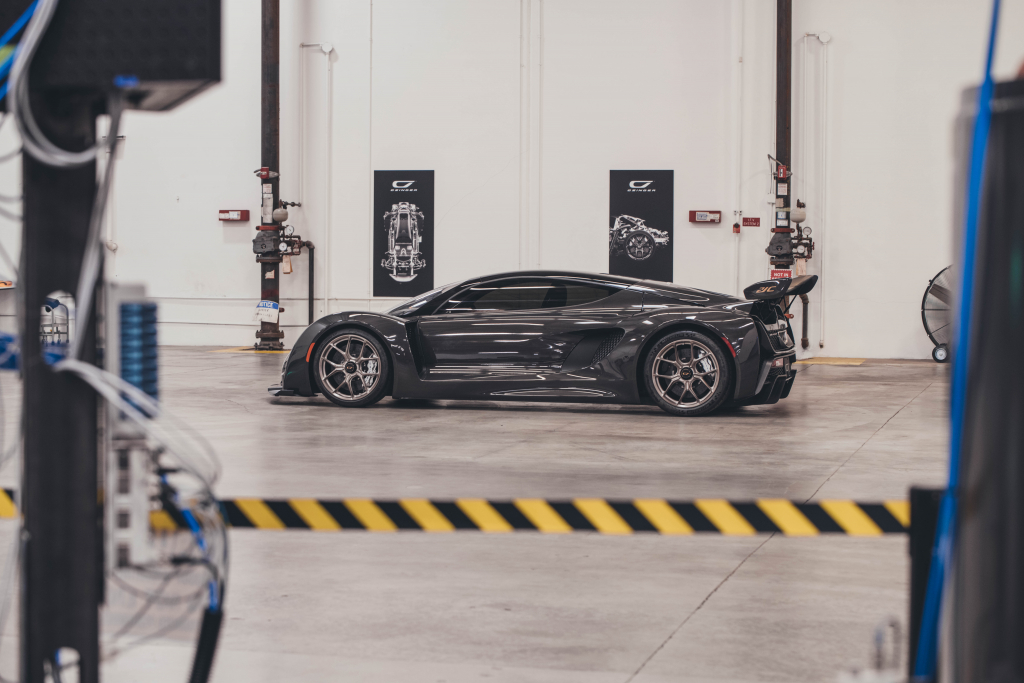 Jon Gunnar, Chief Technical Officer of Vehicle Technology at Czinger Vehicles, and a former aerospace engineer and Koenigsegg employee, has helped mastermind the powertrain. In this world of cost-saving and component sharing, Gunnar was given absolute freedom to do the polar opposite and develop an engine in-house.

This compact twin-turbocharged 2.8-litre V8 petrol unit is mated to two 220kW motors at each front wheel and a 2kW battery pack. It is light and efficient, while the Lithium Titanate battery is designed to charge and discharge much faster than current production EV tech in order to keep abreast of the teams performance demands.

Early figures suggest the 21C can smash the 0-60mph sprint in 1.9 seconds and go on to a top speed of 270mph when the aero package isn’t specified. But Gunnar’s main objective is to beat the Laguna Seca track record by two seconds. To put that in perspective, the McLaren Senna currently sits at the top of that leaderboard with a 1:27:62 lap. 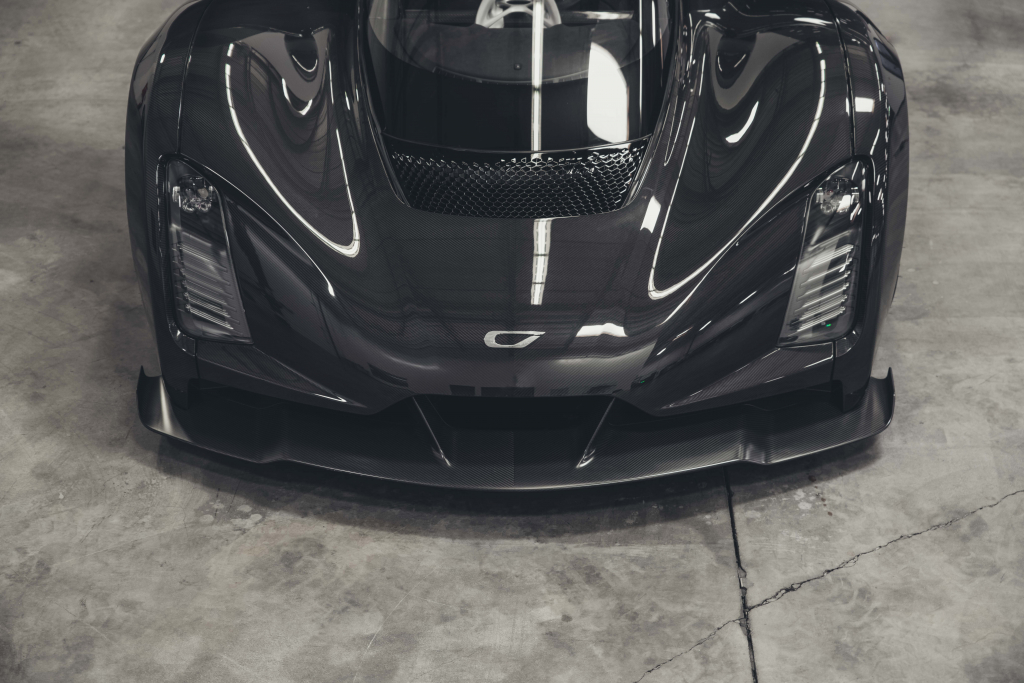 “We wanted to stress the technology, so we made things as difficult for ourselves as we could,” Gunnar reveals. “The in-line seating, for example, offers great advantages when it comes to aerodynamics, but it creates a real challenge in terms of packaging,” he adds.

Despite the advances in robotics and heavy reliable on additive manufacturing, each car, which will be limited in production to just 80 units, still involves some 3,000 man hours to complete.

One of the folks responsible for that packaging headache is chief designer David O’Connell, who says his brief of creating something that ‘no one had seen before’ naturally led him to position both the driver and passenger in-line, like a fighter jet cockpit configuration. 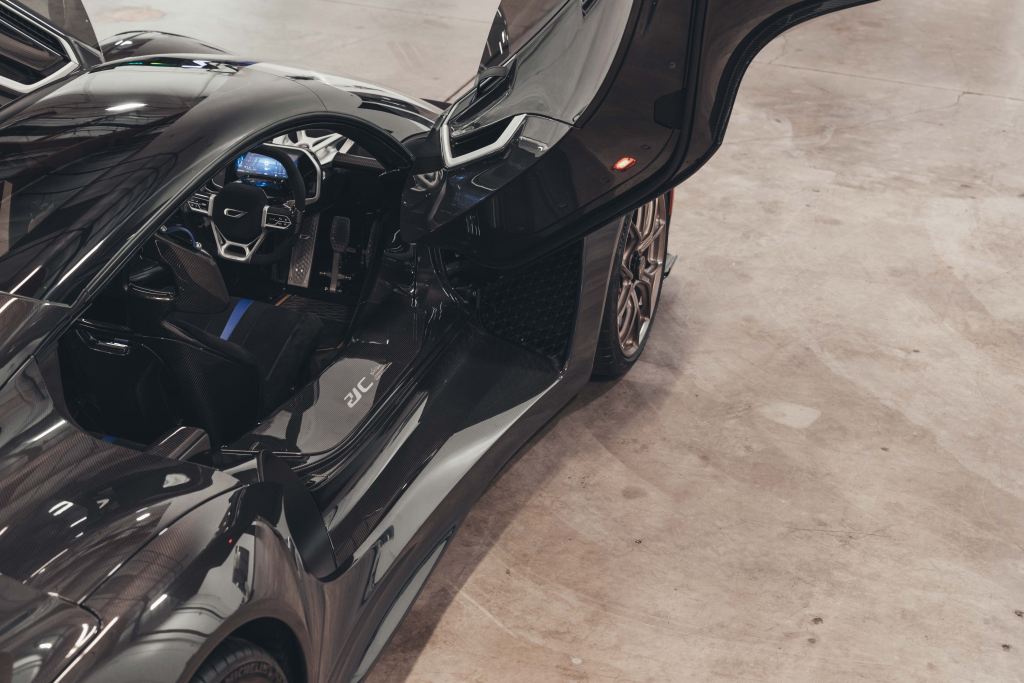 The 21C looks purposeful, aggressive and incredibly taut, even when it isn’t moving, and this is down David’s obsession with all of his lines having purpose: starting and finishing somewhere, rather than randomly bleeding out.

“There’s nothing extra on the car that doesn’t need to be there,” he says. “In fact, we fought really hard not to introduce any extra cut lines or panel breakups, the usual things that typical production cars have that make them look cheap,” he explains.

“The manufacturing technology used here allows a lot of this design freedom to happen, because we can make the structural parts of the car smaller, lighter and tighter. Those relationships are not bound by conventional construction methods. We’re able to put the parts where they need to be, not where they have to be because of the manufacturing processes,” he adds. 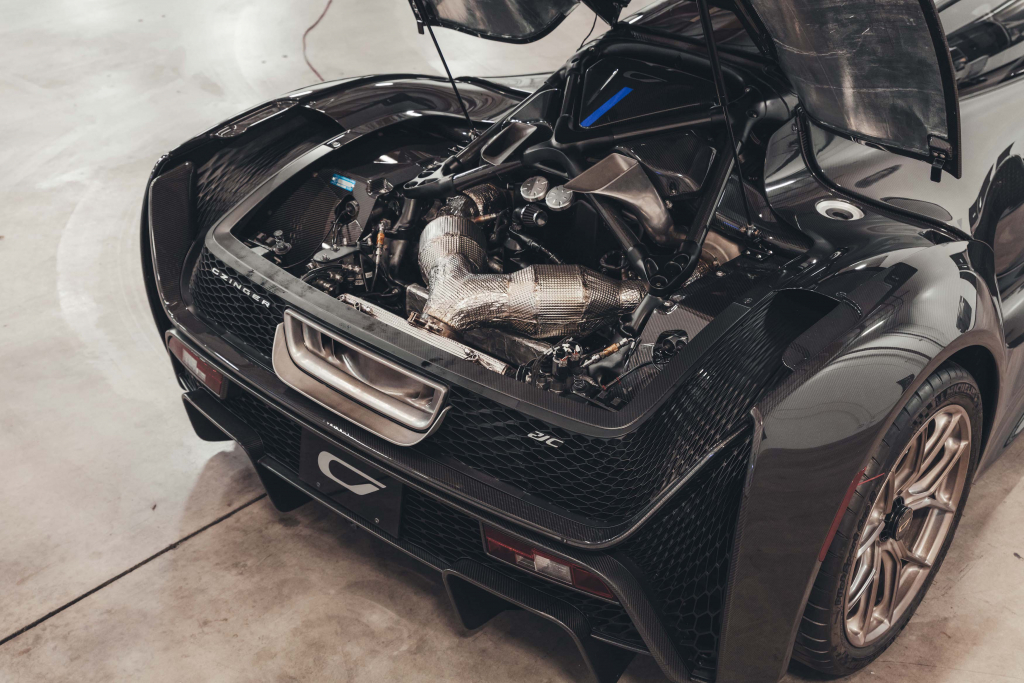 The steering column, for example, is a great example of the generative design coming into its own. In this case, an important structural part of the chassis that is left raw and exposed, allowing for the column to be attached to what would normally be a concealed element.

“We’re proud of this generative design aesthetic because it is totally functional, it reduces weight and gives the car this extremely unique, distinctive look that has never been done before. But it does it in a way that makes sense, because our advanced software says it is the most efficient way of doing things,” David explains.

Kevin Czinger believes that his 21C is just the first of many ‘beautiful and technologically’ advanced vehicles to roll out of his newly established facility, but more than that, he claims the production techniques will go far beyond simply making desirable and fast hypercars. 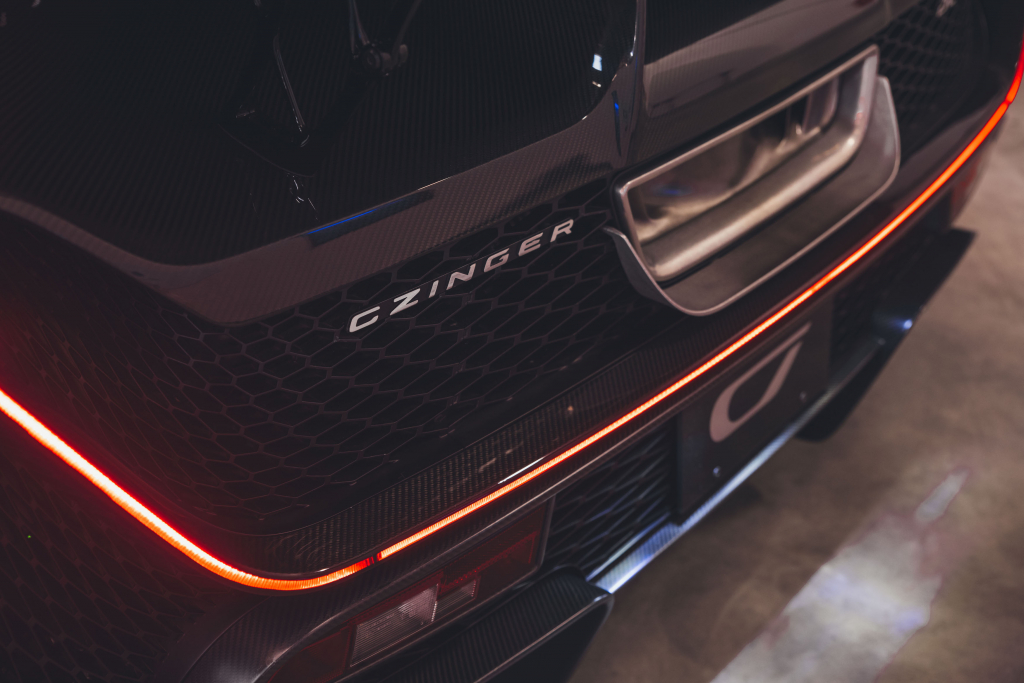 “Through a partnership and on our own, we developed the materials and machines to bring designs to life and then automate the assembly. That allows you go from this massive fixed design, where designs are frozen in machined stamping tools and hardened steel, to the design becoming digits that flow into a machine that then builds those digits, layer by layer, into what ever kind of digital assembly block you need. It could change everything,” he adds.