We live in an age where health and safety looms over our everyday lives like an imperious parent.

Need proof? A friend of mine recently told me that they had to battle through a morning-long training course that covered the topic of how to sit correctly at an office computer.

So you can imagine my disbelief when I witnessed a Frenchman dressed as a crab racing a serious-looking dude in full motocross gear riding a battered old bike around a 342m shale Speedway track in King’s Lynn. 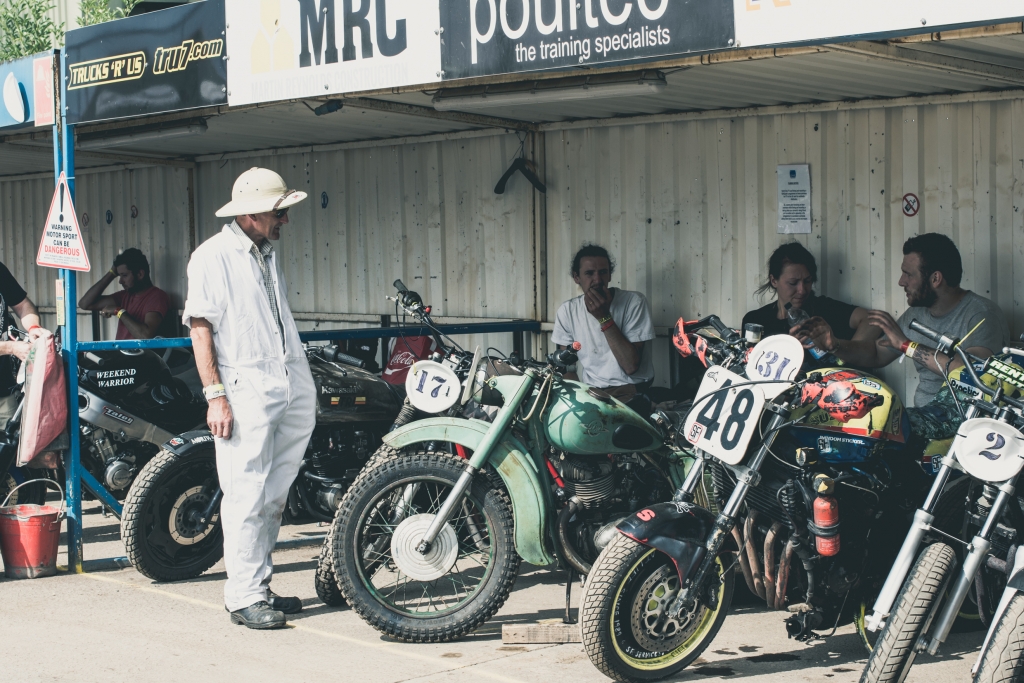 This is Dirt Quake and it is the man from health and safety’s worse nightmare: a weekend long festival of Flat-Track racing, performed by riders who have never set foot on a loose surface before and have turned up with motorcycles that would barely pass an MOT.

“Everything competes at Dirt Quake, from commuter scooters to inappropriate choppers”

For anyone who is sick and tired of the sanitised world of motorsport, this is a little slice of Heaven.

Now in its sixth year, Dirt Quake was the brainchild of motorcycle industry veteran and SideBurn Magazine co-founder Gary Inman, who was bored of the glitz and glamour of ‘standard’ events and wanted to create something the people could get stuck into. 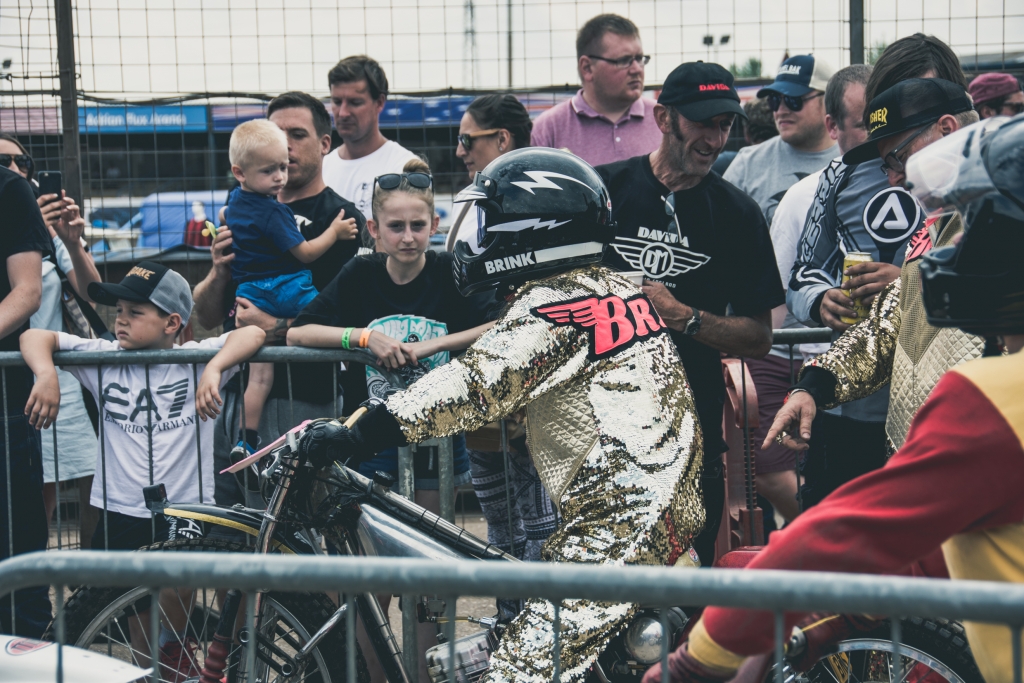 A counter-culture festival of fun was born, where individuals could turn up on whatever clapped-out machine they found in the shed and race around a Speedway course for a few quid.

The sport of Flat-Track racing is so simple in its nature (it’s a giant oval covered in dust) but the art of tackling such a track is incredibly difficult, which is probably why it is one of the oldest and longest running motorcycle racing series in the world.

“For anyone who is sick and tired of the sanitised world of motorsport, this is a little slice of Heaven”

Ride within your limits and it is a relatively safe motorsport, but push too hard and it will bite you in the bum quicker than you can say “high side”. Hence why Inman thought it would be the perfect pursuit for his meeting of motorcycles and mentalists. 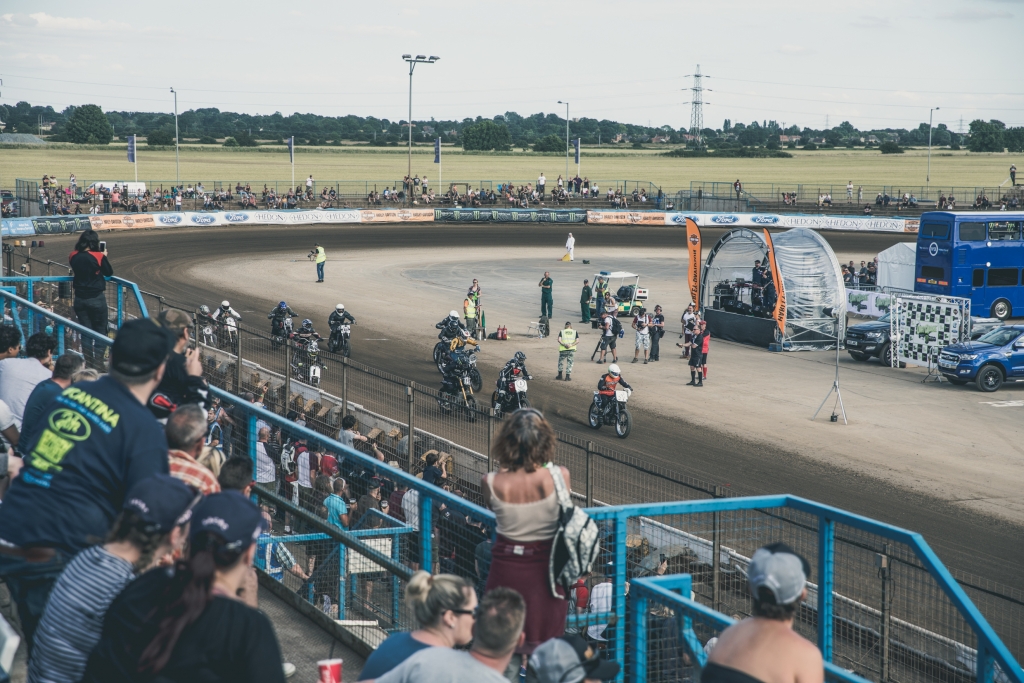 But throw in the overriding sense of camaraderie, the crazy fancy dress, an open pit policy for family and spectators, live music, steaming mugs of hot tea and a smorgasbord of mental, mud-based racing and you have a weekend like no other.

This year’s event was bigger than it has ever been, with a new home at the Adrian Flux Arena in King’s Lynn, a weekend campsite for the hardcore and a longer programme of activities that includes new classes of racing.

Everything competes at Dirt Quake, from commuter scooters to inappropriate choppers, Street Trackers, British classics and more, with the three-day schedule stretched to fit it all in. 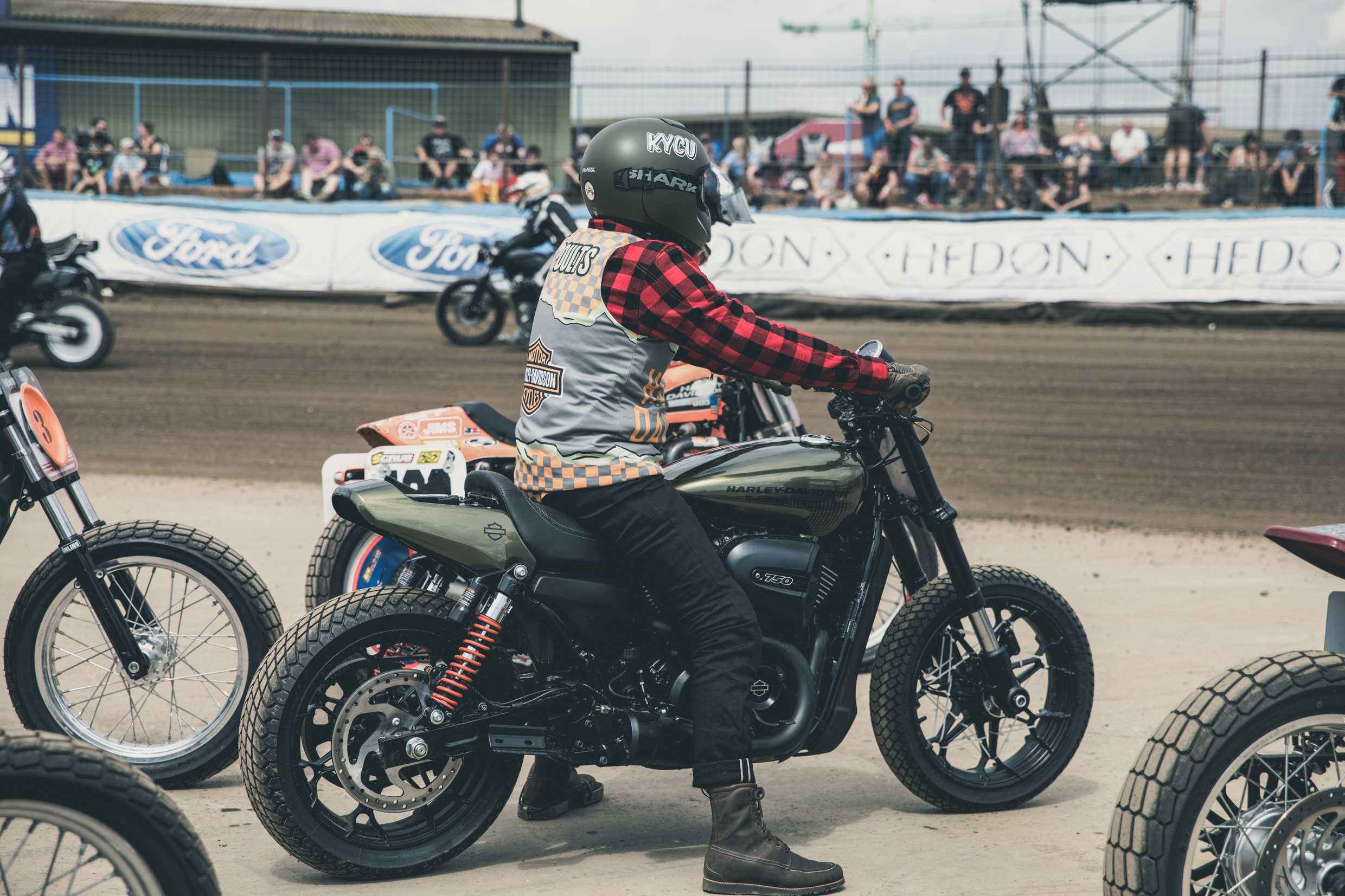 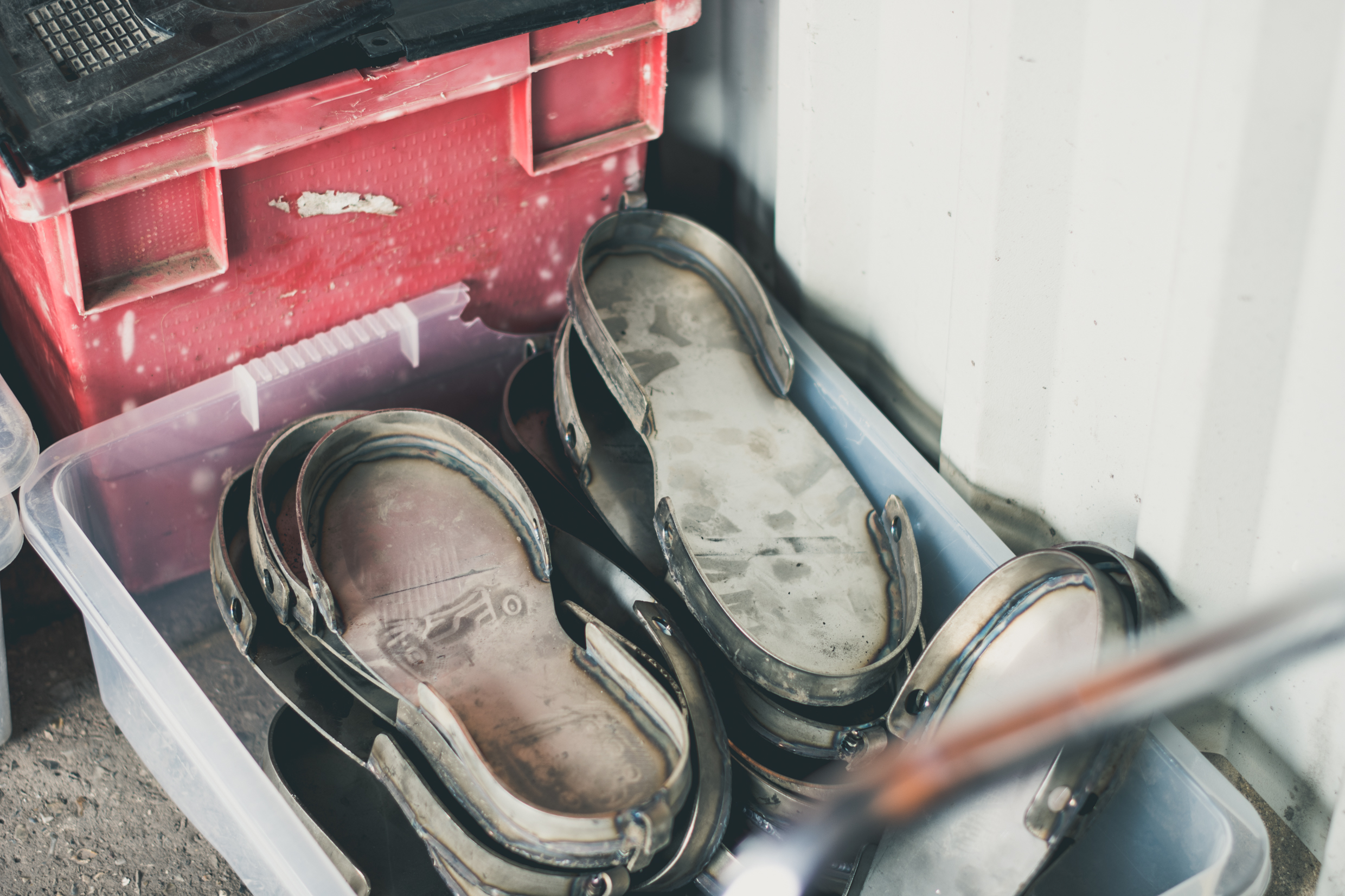 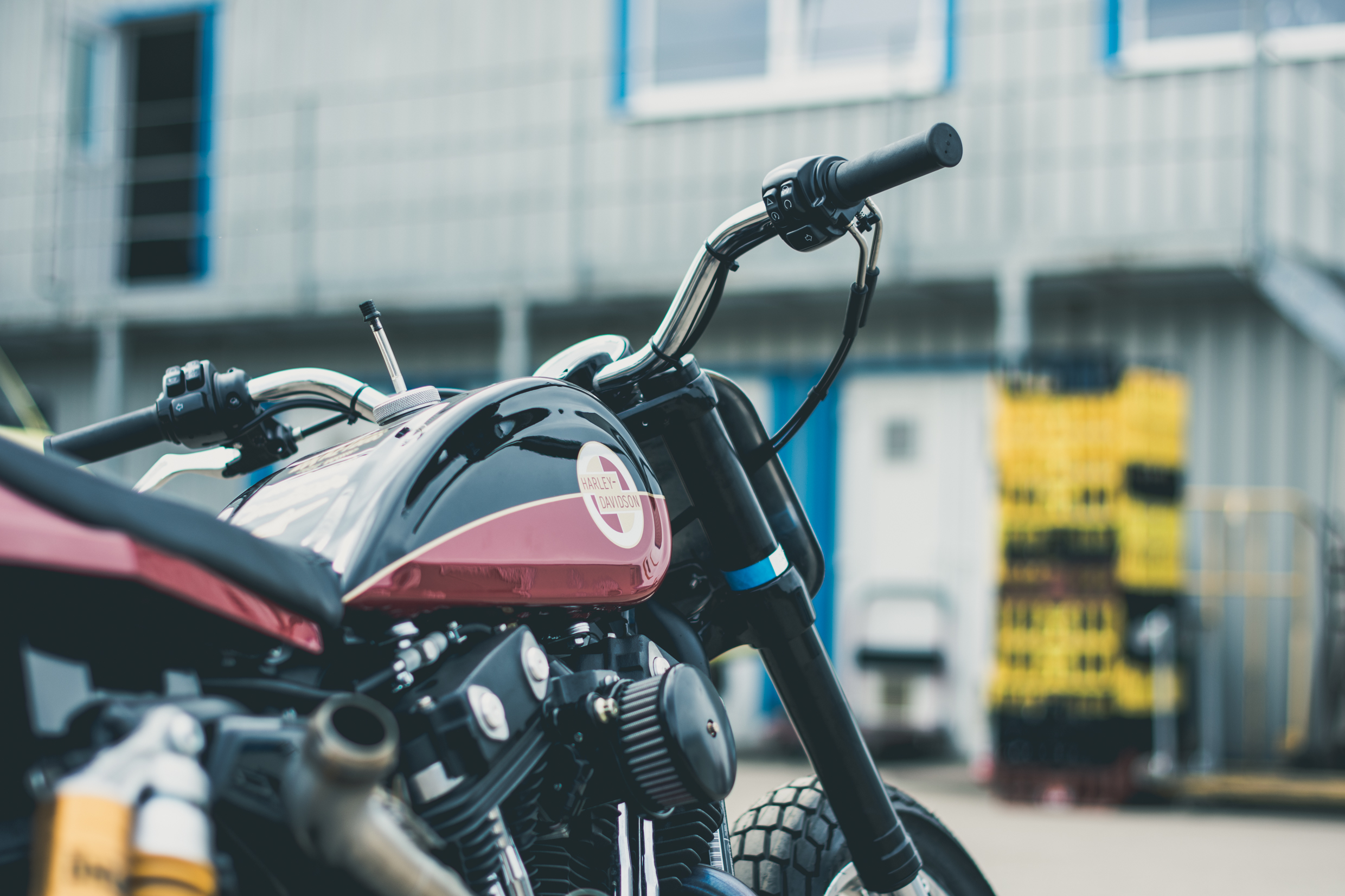 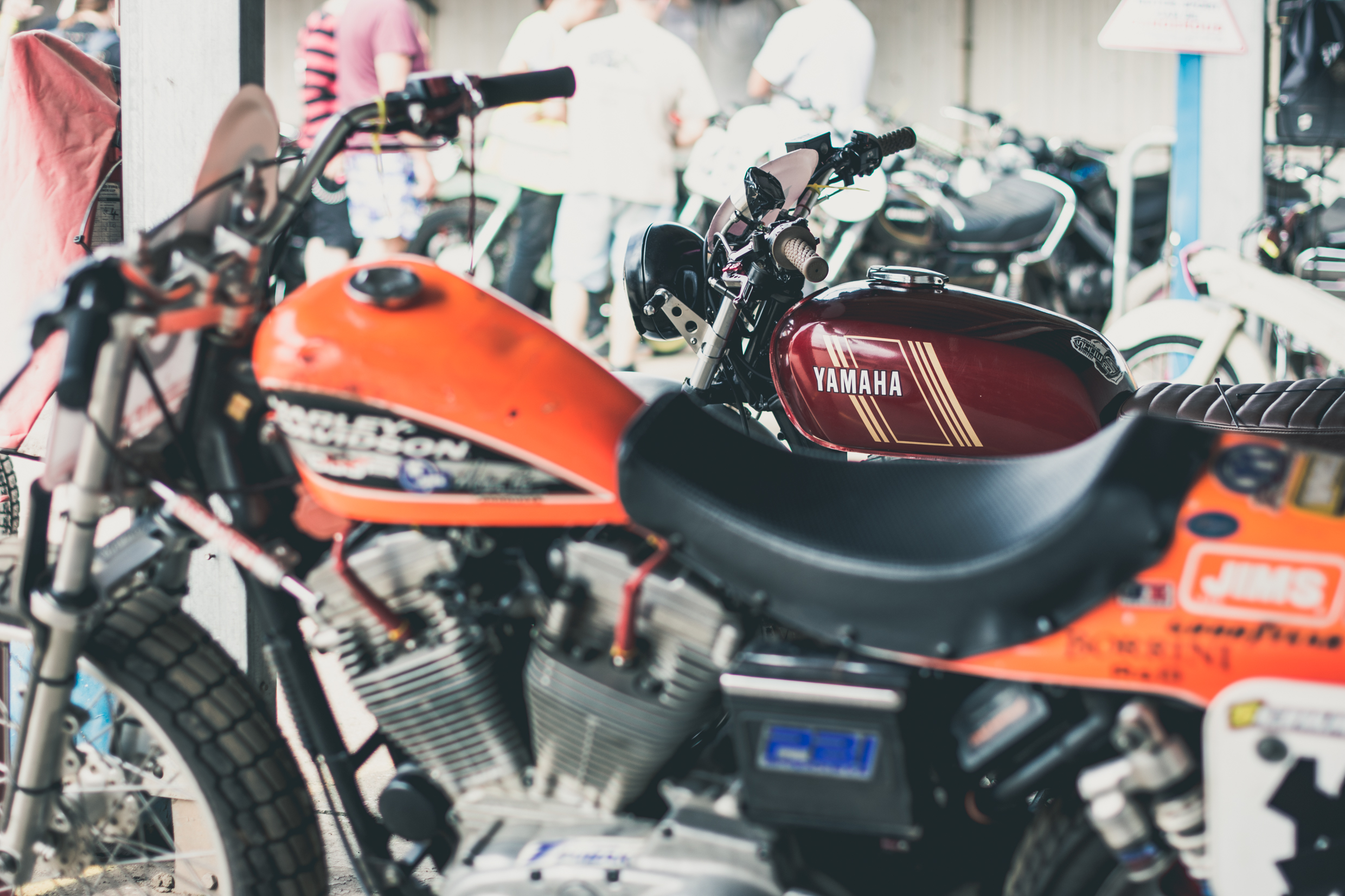 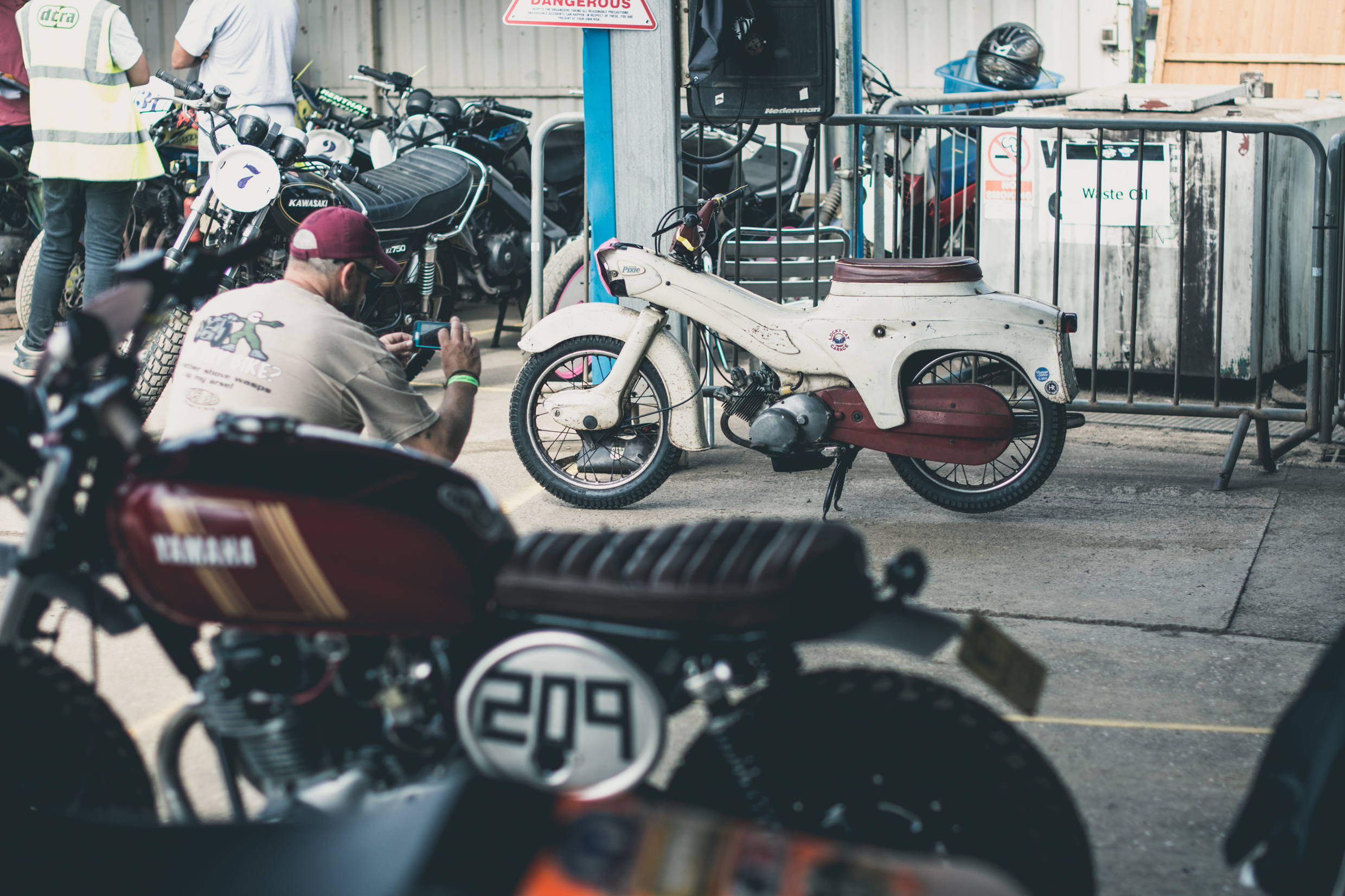 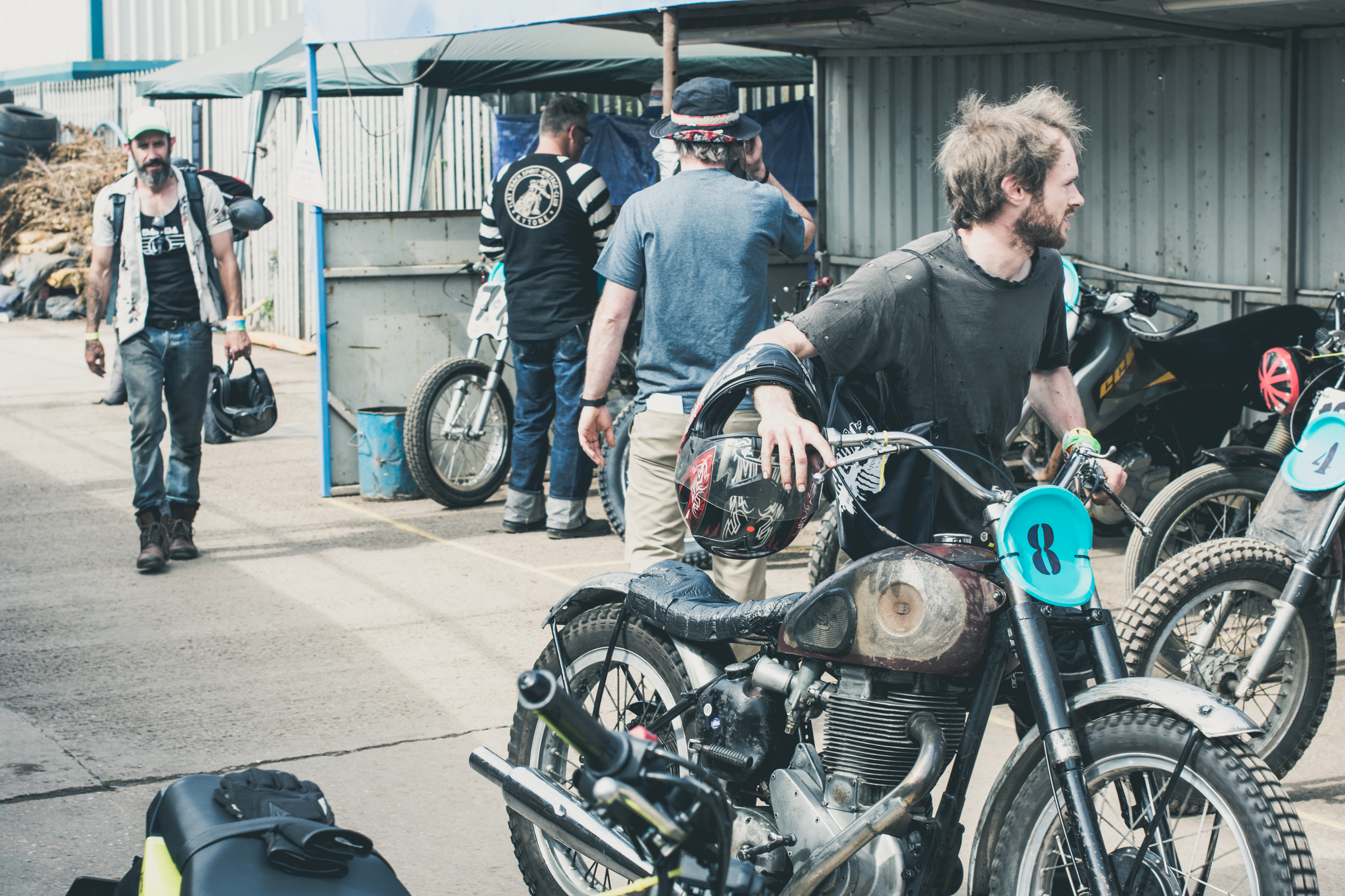 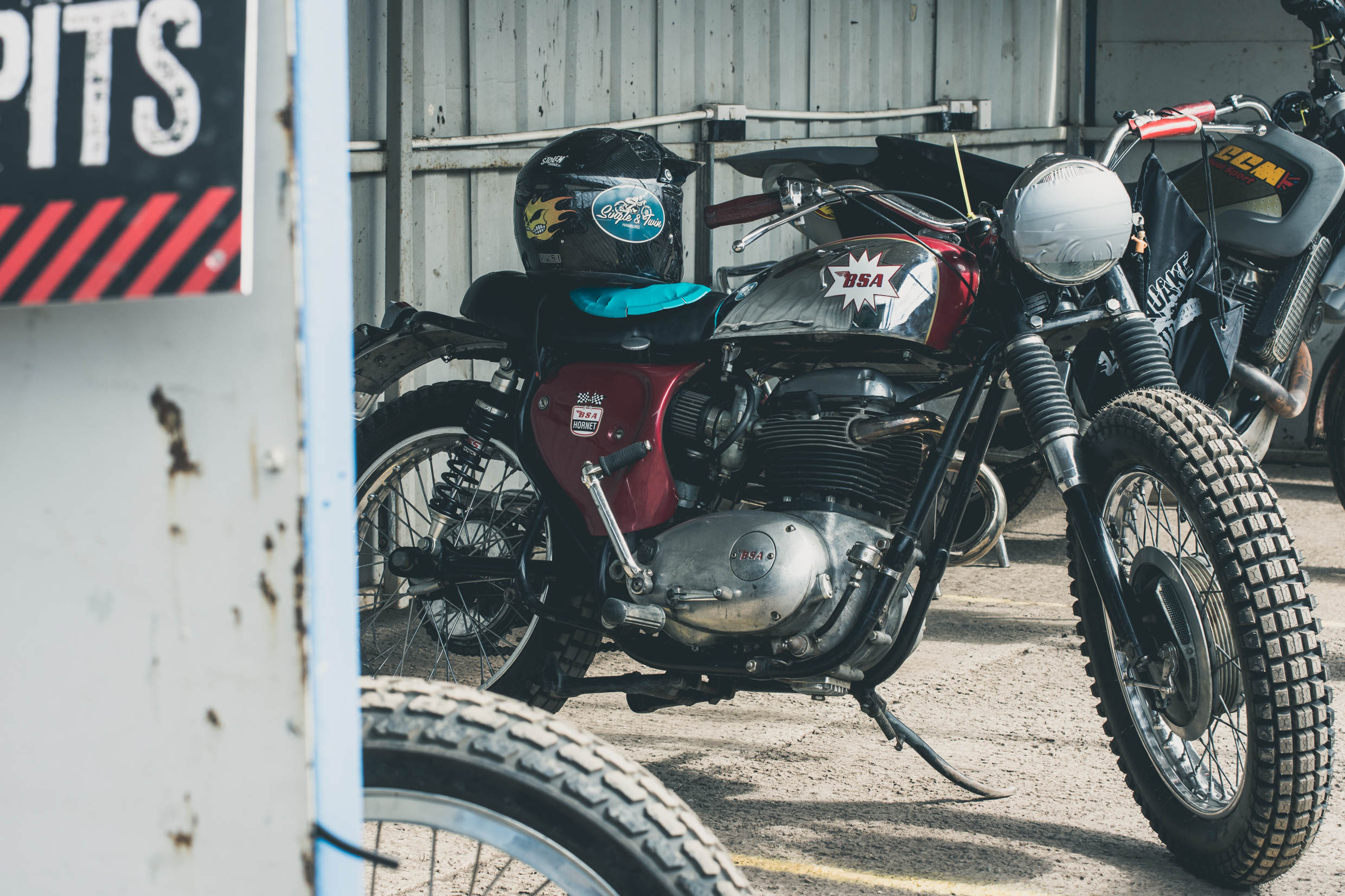 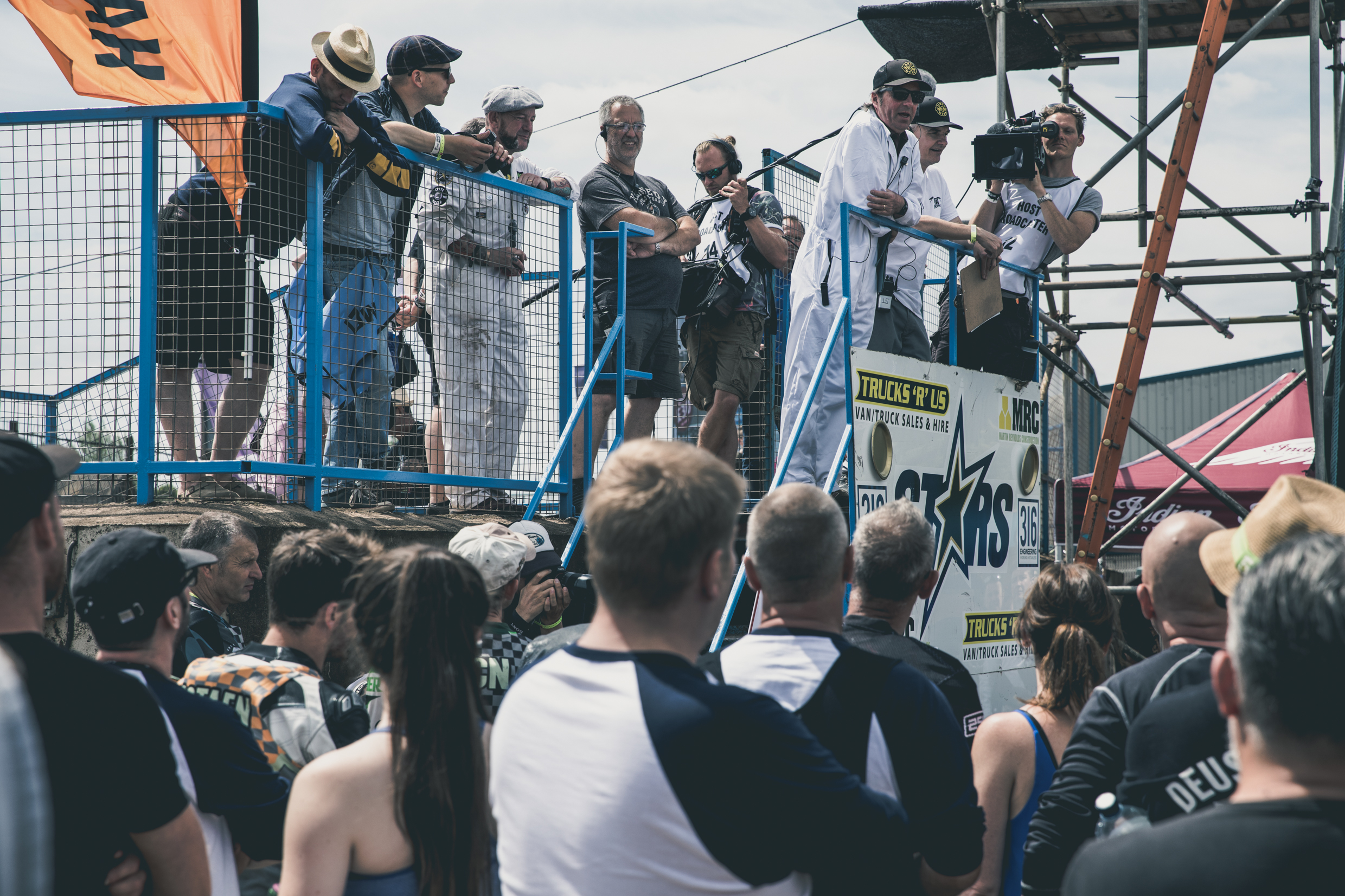 But despite involvement from Harley-Davidson, Indian Motorcycles, Hedon helmets and other big name sponsors, the event still felt brilliantly rough around the edges, with the likes of Carl Fogarty and Guy Martin rubbing shoulders with the rest of the punters rather than being ushered around by PRs and marketing folk.

“I didn’t fancy a trip to the hospital, so took it easy during the first few outings”

Whether that continues now North One Television has bought a slice of the pie is yet to be seen.

Dirt Quake: Taking to the track

Rewind a few weeks and I was at a roasting hot Rye House Raceway learning the art of Flat-Track racing and attempting to garner enough knowledge and bike control in order to avoid breaking bones at the main event. 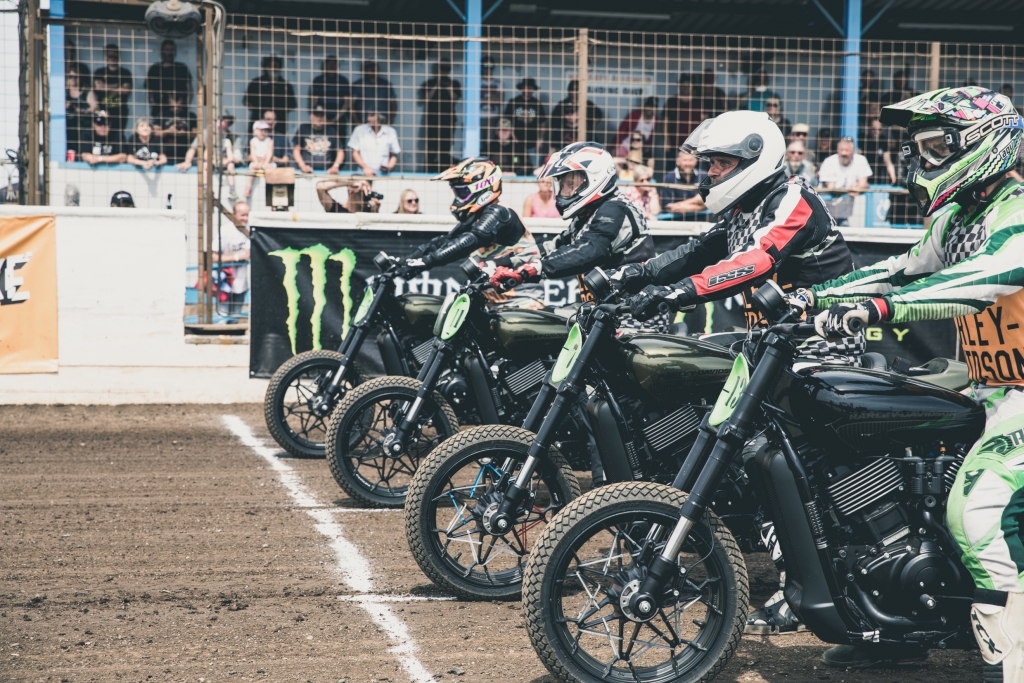 The sun wasn’t shining quite as brightly on the Sunday but it was muggy and close enough to have my goggles steaming up with anticipatory sweat as I sat astride a heavily modified Harley-Davidson Street Rod.

The ballsy US Manufacturer kitted out a number of bikes to cope with the demands of dirt racing and kindly allowed guest riders to jump on-board and take part in several race classes throughout the weekend.

It was my job to pilot Number 15 in the popular Hooligan Class – a highly competitive race that demands the machinery boasts a multi-cylinder engine over 750cc and uses a stock frame. 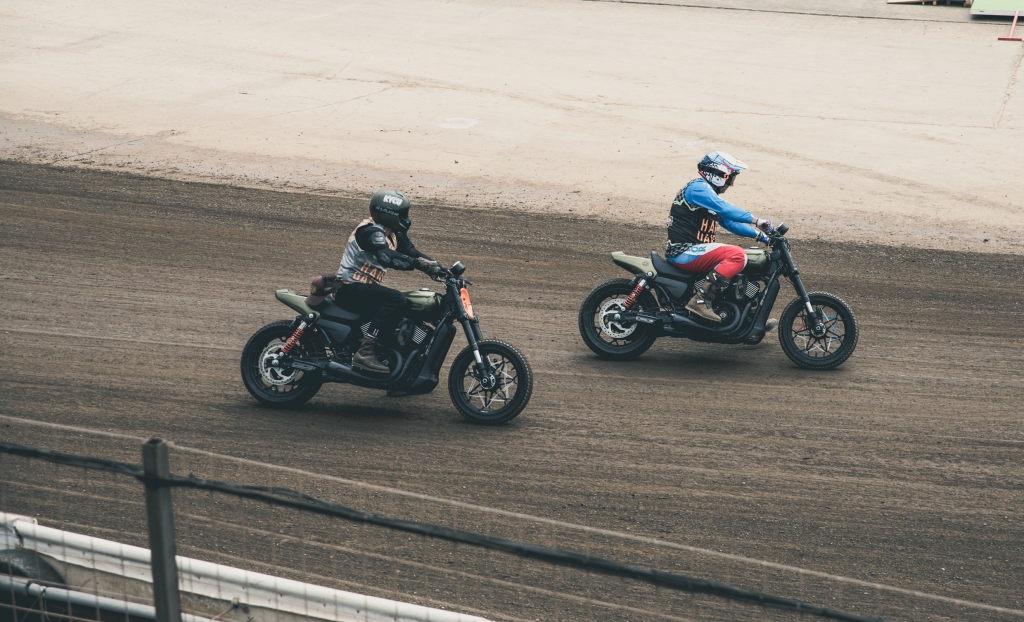 Of course, Indian Motorcycles couldn’t let Harley have all the fun, so the outfit tasked Krazy Horse customs with fettling a few of its Scout models and employing some tasty riders to prove the machine’s prowess.

To compound matters, Carl ‘Foggy’ Fogarty sat just ahead of me as we lined up for the first few practice laps. I couldn’t help stifle a chuckle underneath my helmet.

Flat-Track racing has the ability to reduce racing gods to mere mortals in a split second, as the unforgiving shale surface transforms from a grippy friend to a horribly hazardous foe with every passing lap. 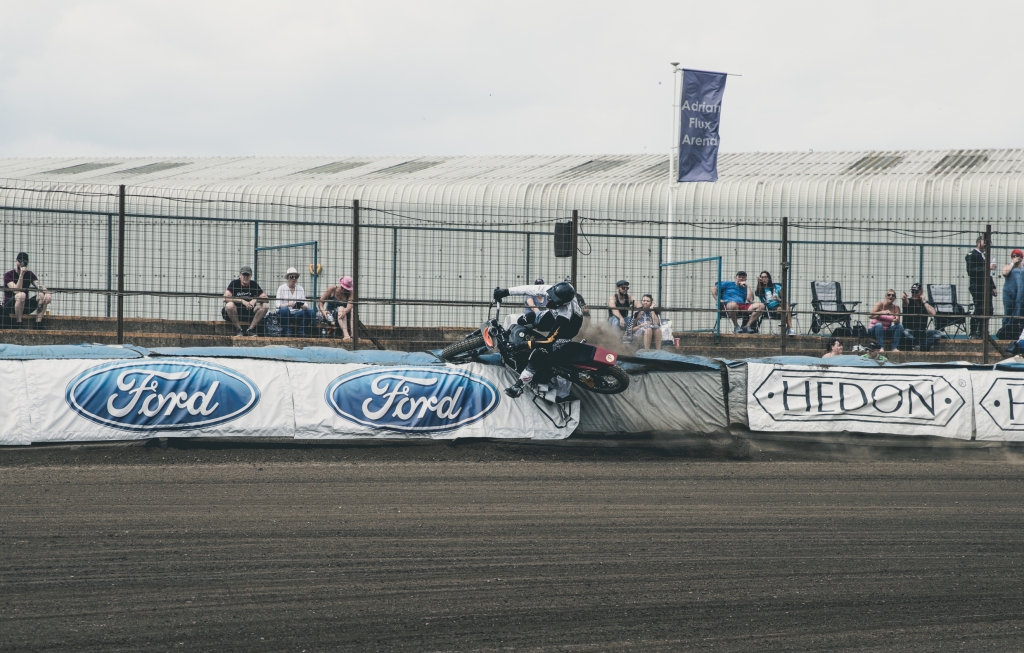 Carl Fogarty knows this, as he broke a shoulder, ribs and punctured a lung in one horrific off, while my fellow Harley-Davidson team riders suffered multiple topples and smashes that broke bones, bruised egos and battered body panels.

Gary Inman’s safety talk at the beginning of the day warned that someone would be going home in an ambulance and pleaded with the racers to ensure it wasn’t them, but his supplication fell on deaf ears.

The heady mix of competitive spirit, relative lack of experience and widespread use of machinery that’s deliberately -and quite hilariously – not fit for purpose makes for entertaining racing… and spectacular slams. 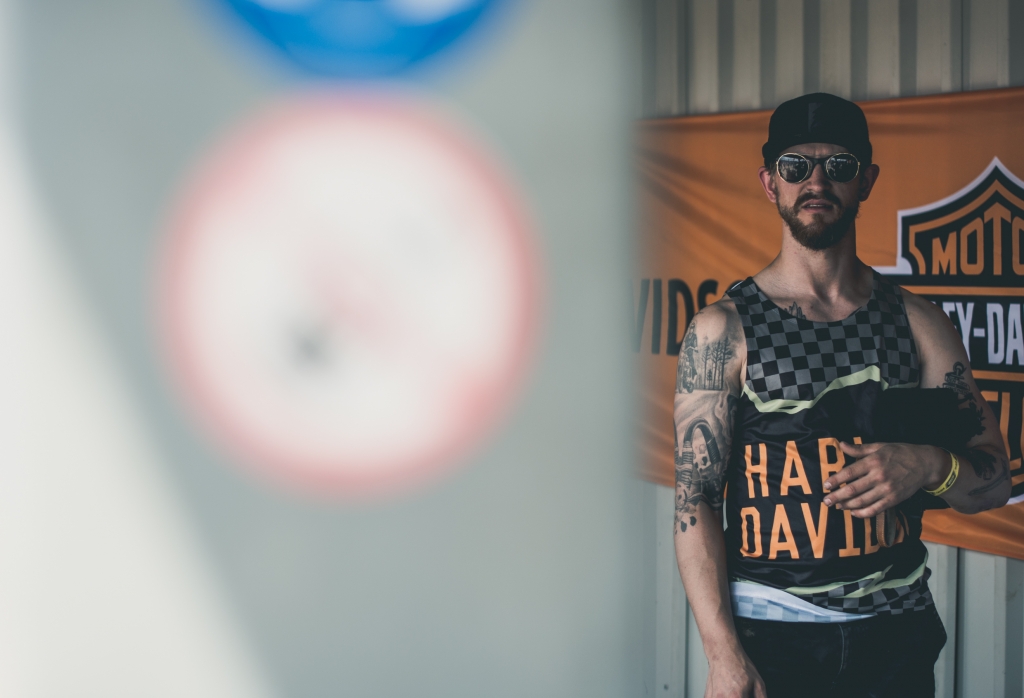 I didn’t fancy a trip to the hospital, so took it easy during the first few outings but Dirt Quake manages to bring out the competitive side in everyone.

By race two, I was scrapping for a position at the back of the pack (the frontrunners were too good to worry about) and what ensued was a fight for pride and ego.

There were no prizes for the back runners (that included me) but it didn’t matter. The grins on faces and friendly backslapping on the slow trudge back to the pits were enough to make it all worth it. 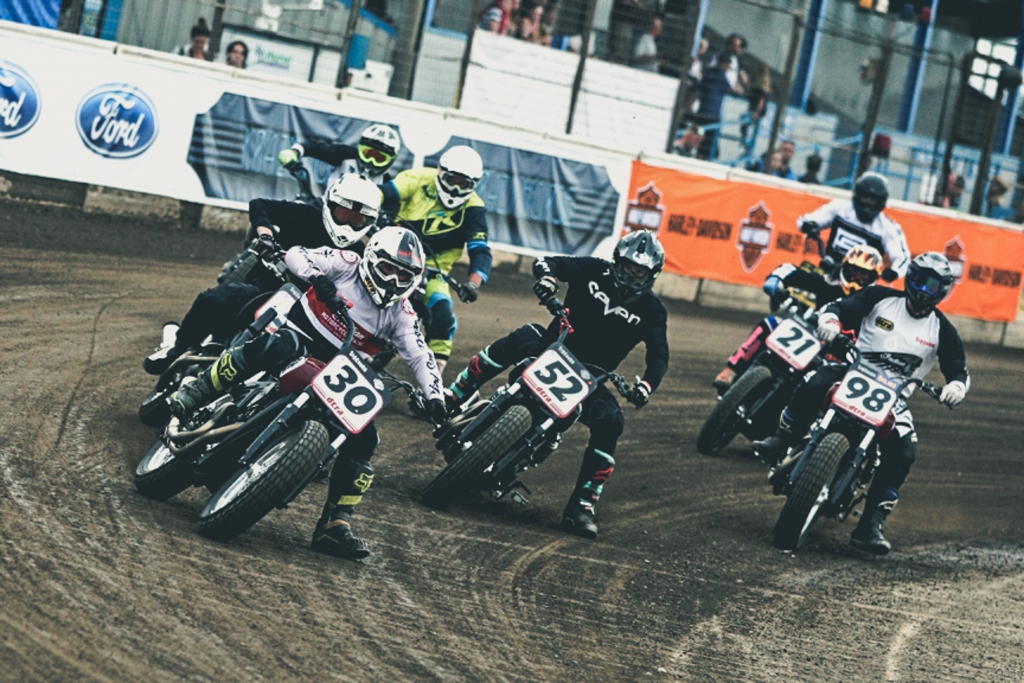 Unfortunately, my heroic (and slightly pathetic) exploits at the rear of the race didn’t earn me any slots in the ITV4 highlights package (the first year Dirt Quake has been televised) but it does have me itching for more.

Next year, Flat-Out will show up with a bike it doesn’t mind smashing to bits and some reinforced cojones.

And that’s how the event makes you feel. It’s a glorious underground thing that’s packed with everyday lunatics, greasy food and the smell of petrol fumes that will appeal to any down-to-earth petrolhead. 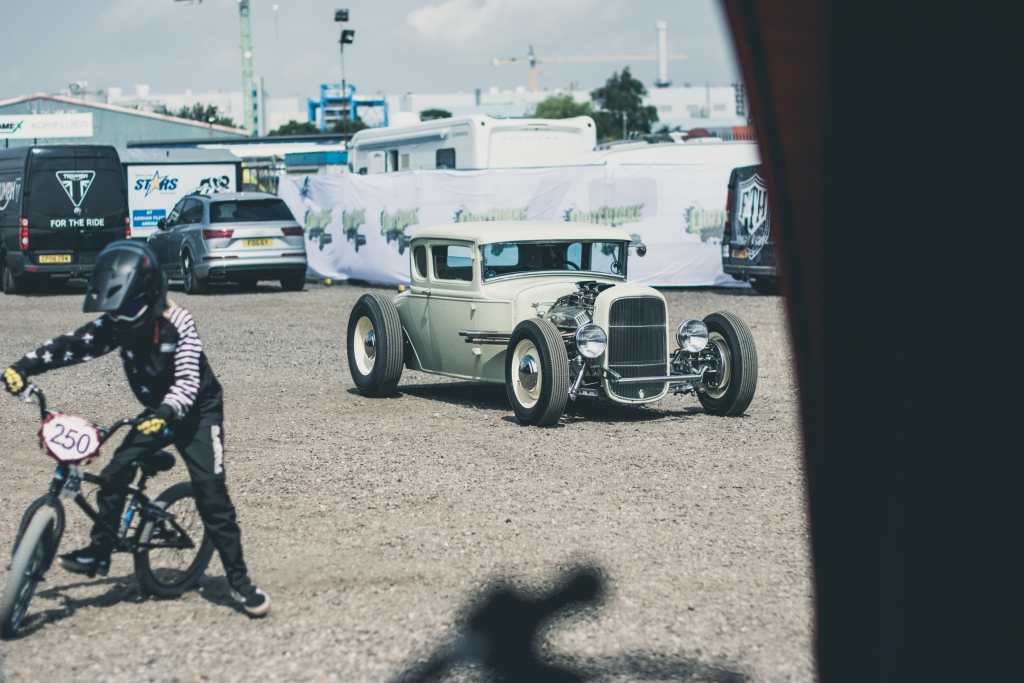 Just make sure you pay it a visit before it gets too popular and the man from health and safety spoils the fun.