There is a man dressed head-to-toe in a Vegas-spec Elvis outfit. The cuffs of his bejewelled and pristine white trousers are sealed tight to the top of his boots with duct tape and he stares intently at the action currently taking place on the dusty surface of Arlington Stadium.

Typically home to frenetic local speedway races and the odd bit of stock car action, the misshapen oval circuit now plays host to a bunch of stripped-back Vespas, a commuter scooter and 23-times Isle of Man TT champion John McGuinness perched atop a gloriously 80s Honda Cub… and he’s wearing what looks like his nan’s raincoat and silk scarf.

This might sound like the sort of cheese-induced hallucination that visits in the depth of night after scoffing several kilograms of Wensleydale, but it’s a perfectly natural and typical occurrence at DirtQuake 2019 – the annual flat track racing event that encourages newbies and bike nuts alike to face off on an oval circuit (riding whatever motorcycle they can get their oily hands on) to be crowned champion of their class.

Watch the full film from this year’s event below…

Flat-Out has been here before, but when it was hosted in another slightly unglamorous location somewhere outside of Kings Lynn, so we are fully prepared for the slightly madcap scenes that tend to unfurl here. Only this time, we’ve brought along our not-so trusty (and comparatively puny) Honda CB175 to do battle.

But judging from the serious looking machines on display, flat track racing has rapidly gained popularity in the UK , perhaps because it doesn’t really require specialist machines like speedway, nor is it as physically demanding as, say, motocross or enduro racing. Almost anyone, any age, can slip a steel boot on to their left foot and gun it around a flat track circuit.

Whether they remain upright is another question, because the skill involved with gracefully encouraging the rear wheel of a motorcycle to break traction, obtaining balance through the left leg and essentially ‘drifting’ the bike around a sweeping bend at speed is one that takes years to master. 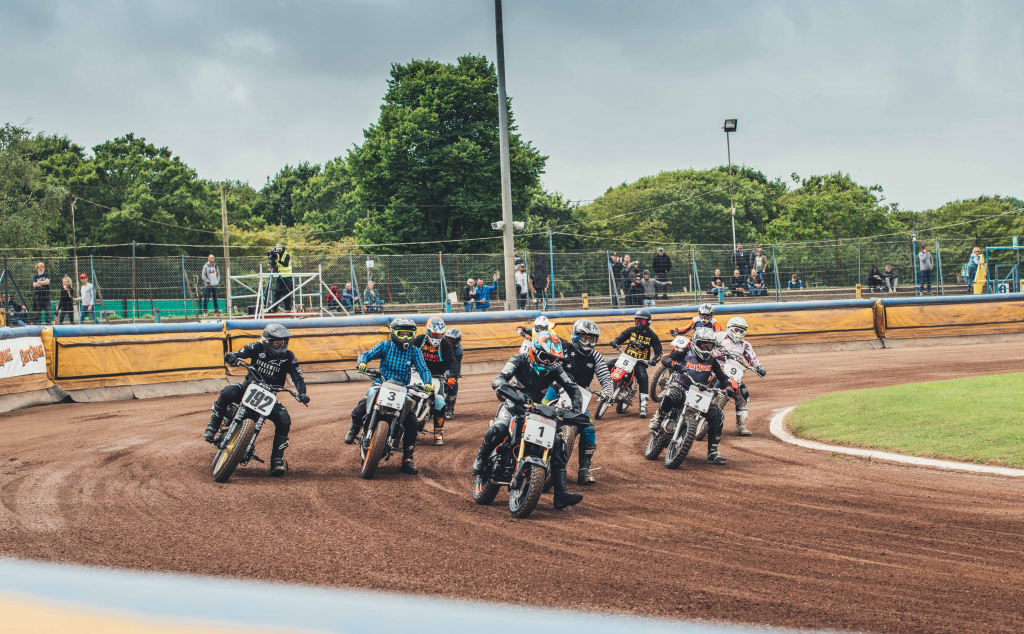 Pete Boast, regarded as one of the Godfathers of flat track racing in the UK, reminds me of a few body position and technique essentials as he straps a steel boot to my left foot. “Remember, keep your elbows high and left arm straight during the corners and push that bike towards the ground,” he says.

But then he takes a look at the skinny knobbly tyres on the little Honda I plan to race that day and says,” actually, there’s no sidewall on those, so I’d probably go careful if I were you”.

Elvis has left the building

Arlington Stadium is in the middle of nowhere and it has all of the allure of any stock car or banger racing circuit in Britain. Greasy burger vans, crackling loud speakers and toilet blocks with questionable plumbing greet customers but the DirtQuake 2019 train is in town, so the place has been dressed up a bit with a stage for live music, some stalls selling trendy bike merch and a few stands hawking food and drink. Despite the festival running for around eight years now, it still feels very low key. 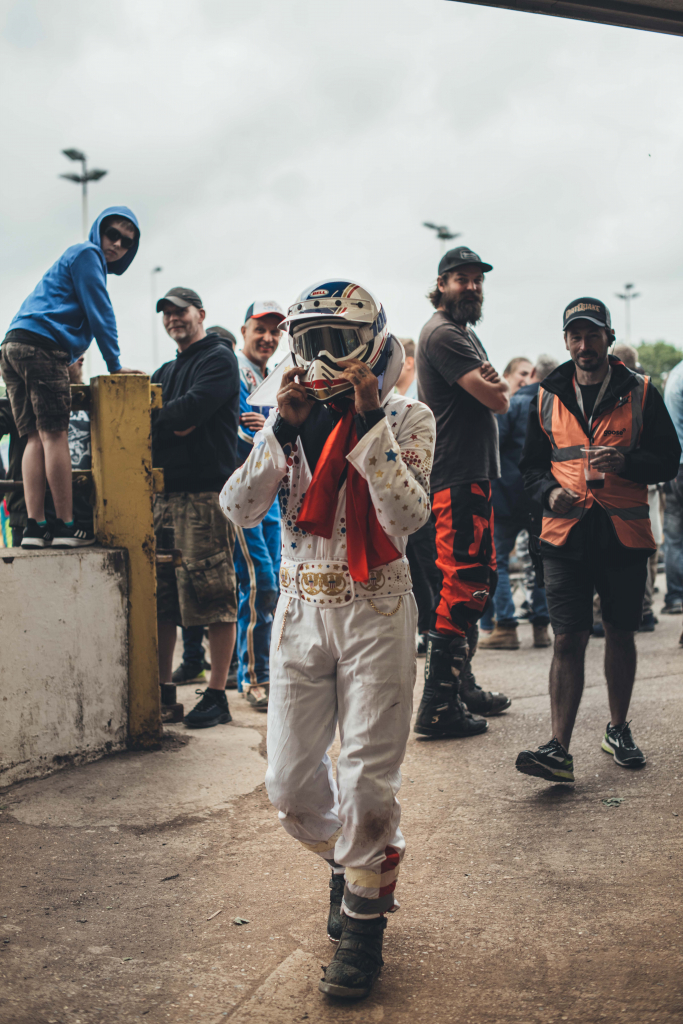 But that’s the point really, because despite a few scattered showers and some gusting winds, the few hundred competitors all gather together and start excitedly chatting bikes while receiving a rundown on the day’s events. It’s not really about the style or the swagger, it remains a good excuse to legally thrash a bike around a circuit against fellow nutters.

Classes this year include scooters, choppers, inappropriate road bikes, street trackers and purpose-built hooligan dirt track machines. There’s no real thought process to those races within each class, so my vintage 175cc Honda will valiantly do battle with much bigger, more powerful street trackers.

“Judging from the serious looking machines on display, flat track racing has rapidly gained popularity in the UK”

It’s nothing to worry about, because skill can easily outclass power at this event. It’s just a shame I lack either of those two things. 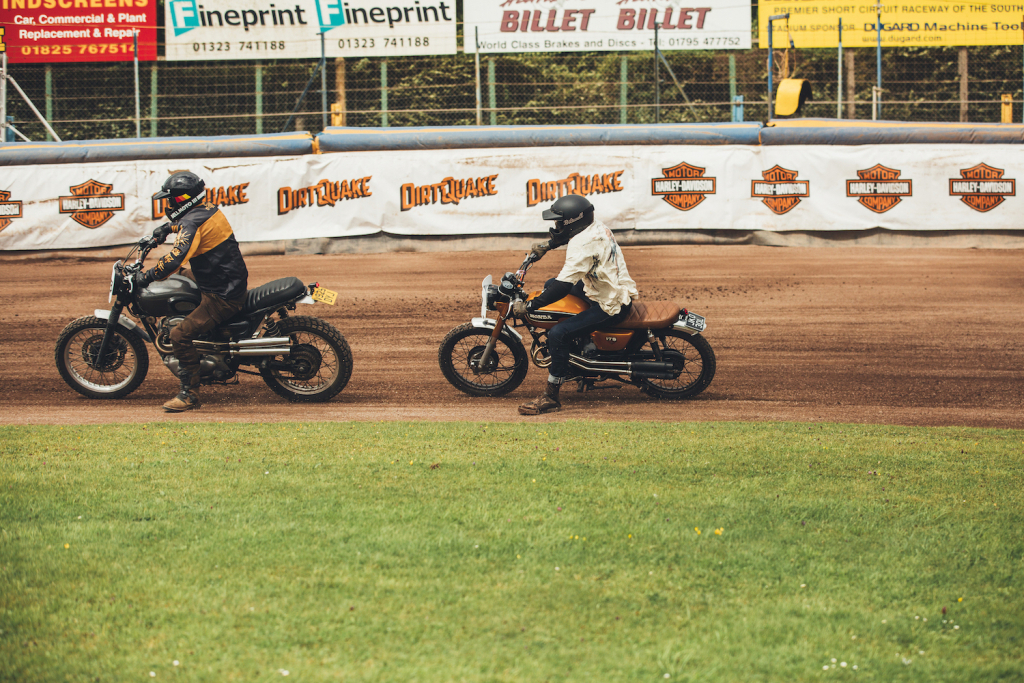 The days kicks off with a practice lap and a chance for many riders to experience the loose and ever-changing surface of a flat track course for the first time. Unpredictable shingle is watered occasionally throughout the day to increase grip, but the fastest line is constantly changing, as parts of the track dry out and become as slippery as an ice rink. Winning a race is as much about instinctively hunting for traction in the right places, as it is about raw power and technique.

It’s not long before the little Honda is called up for its first race and the queue of riders next to me anxiously check their machines and gear before lining up in the holding pen. The smiles and banter soon give way to serious game faces, despite one guy in the group sporting a stylish chequered lounge suit.

Quite predictably, the underpowered Honda receives a royal thrashing in its first race, with the larger machines massively outgunning its puny displacement on the straights. It keeps up in the corners and stays upright, which is more than can be said for some of my fellow competitors, one of whom almost had his head run over by my front tyre. 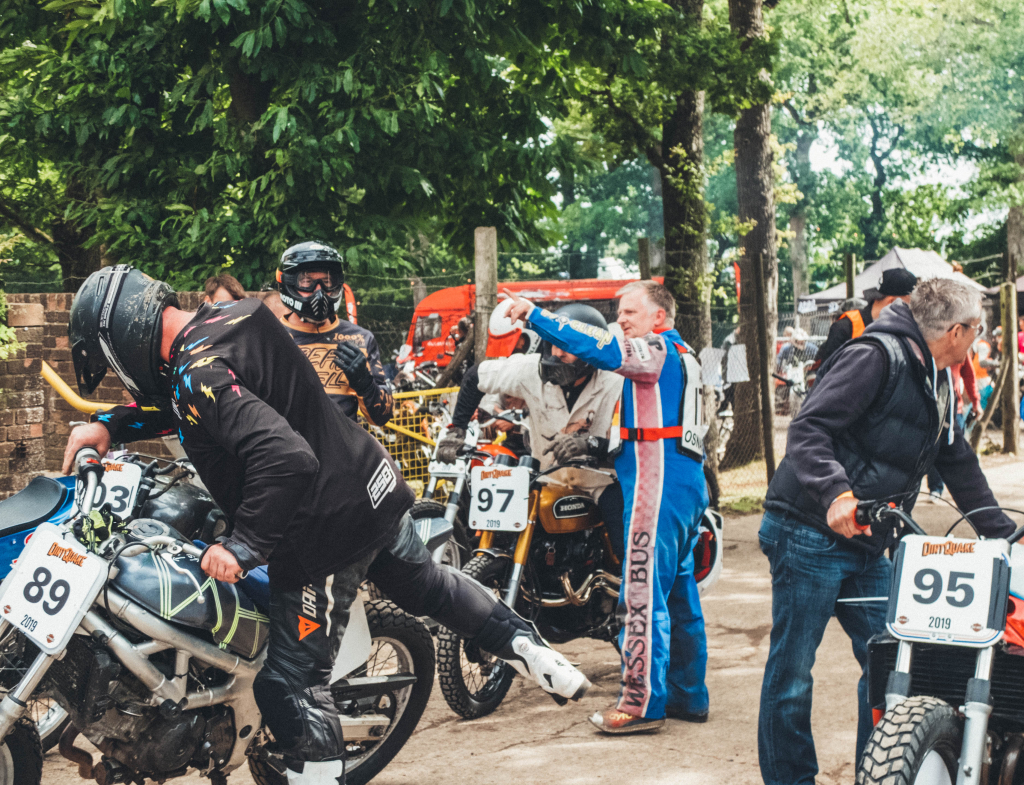 The racing is fast (well, it feels it anyway), furious and all over after just four laps. The winning bikes receive points for their podium places and will go on to compete in later heats and finals. The Honda enjoys a second race to try and claw back some dignity, but it fails. Coming second to last but doing so in style and in one piece, at least.

But time off the bike means time to enjoy the sliding and shenanigans of the numerous other classes. It is a wonder the extended forks, ape hanger bars and weighty engines of the chopper class manage to even round the first corner, while the tiny scooters provide some of the most competitive racing of the day – goaded on by John McGuinness and his granny mac.

“It doesn’t matter that everyone looks a little wobbly and wooden, because we are all in the same boat together”

The DTRA-sanctioned hooligan race actually counts towards the season, so the riders are understandably feisty. Leah Tokelove dominates on her Indian FTR 1200 and puts on a masterclass of smooth, precise riding, which leaves the rest of the pack slithering, squirming and almost high-siding in an attempt to keep pace. 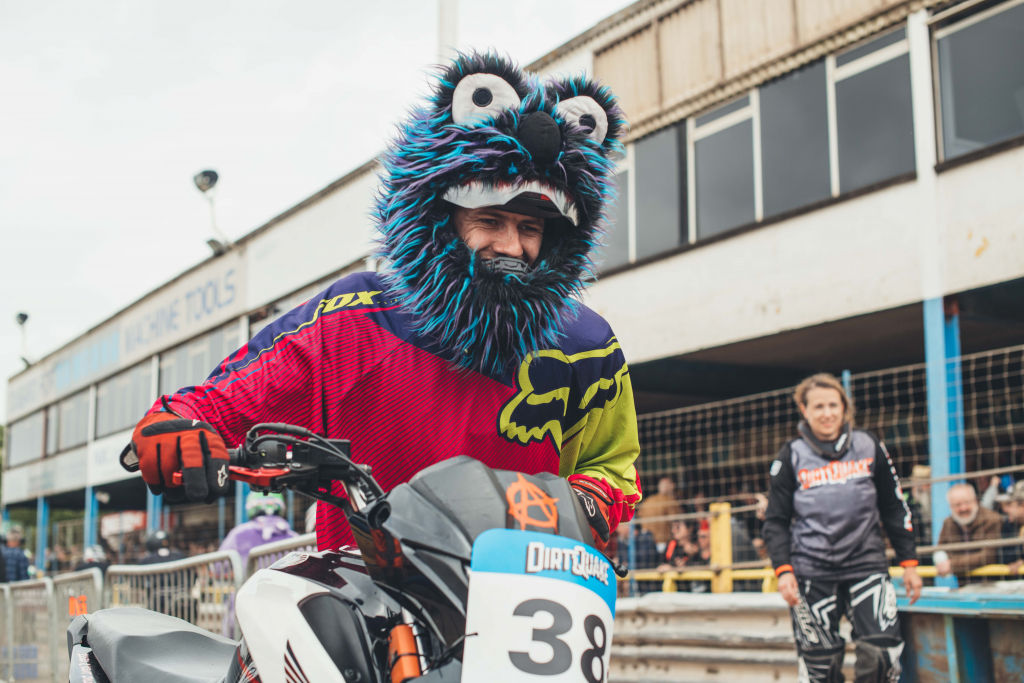 But you kind of have to be there to appreciate it. A point that is further rammed home when viewing the TV highlights package that plays out on ITV4 a few days after the event. When viewed on the big screen, the racing looks sluggish and the atmosphere and camaraderie is lost a little in the edit. When stood at the side of the track, it doesn’t matter that everyone looks a little wobbly and wooden, because we are all in the same boat together. Just get around safely and in style, that’s all anyone really cares about.

Partly because of the TV highlights package, DirtQuake still enjoys some fairly heft sponsorship from Harley-Davidson, which showed up en masse this year with some finely fettled Street Rod 750s and its own race, which invited journalist, social media influencers and friends of the H-D badge to take part.

Yours truly was supposed to be part of that race, but several mechanical failings on two different Harleys ensured that just wasn’t meant to be. Instead, former Olympic snowboarder and all-round shredder Coco Merz decided to join Leah Tokelove in showing the boys how it is done, namely by dominating the women’s class (hey DirtQuake, there’s no need for a women’s class in this day and age!) and the H-D media race. She cleaned up and allegedly walked away with a Stockwell Design custom Harley for her troubles. Nice work. 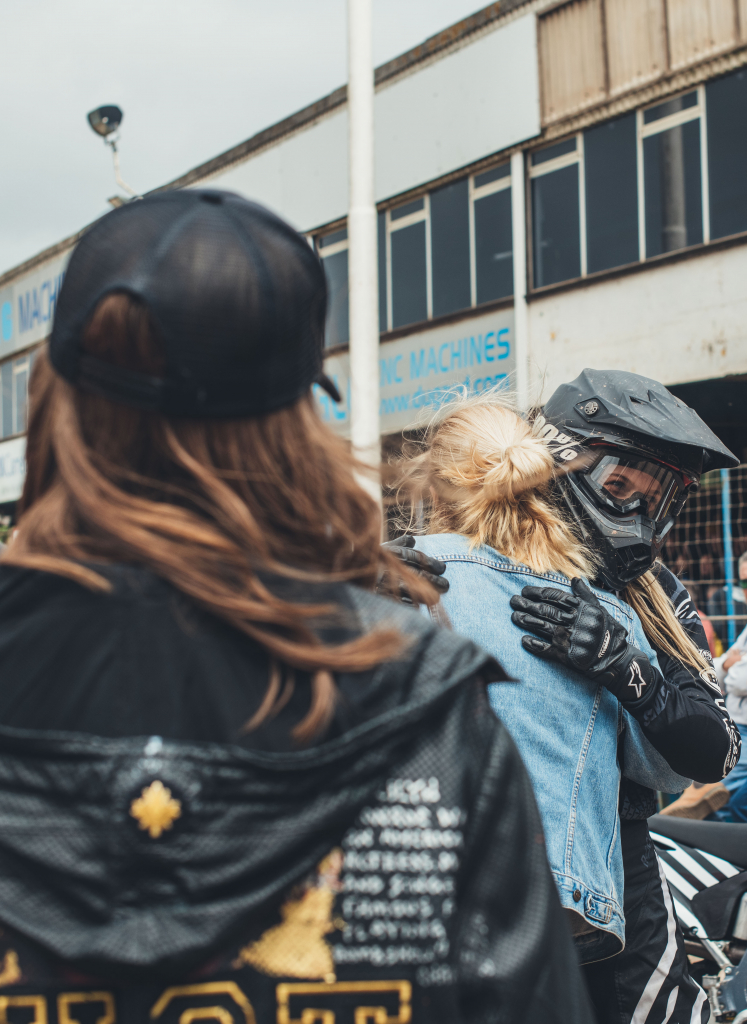 In today’s age of health and safety lunacy, it is nice to see a ‘run-what-you-brung’ event like DirtQuake still fly under the radar, but with the the awesome Malle Mile and the Bike Shed Festival adding a touch of class to muddy amateur motorcycle proceedings, let’s hope it doesn’t get left in the dust.

Fancy getting tickets for next year’s event? Hit the DirtQuake website and stay tuned for news.