It’s the start of the summer holidays, the sun’s heat is blazing down on the asphalt and slightly pickled beach-goers cram themselves into any available space on the long stretches of local sand. While the sun is a welcome sight and the hordes of holidaymakers no doubt line the pockets of local businesses, we can’t help thinking that all this means is one thing: shit loads of bloody traffic.

As predicted, the crowds descend on a sweaty Thursday in July and we are face with this very problem. Luckily, Seattle-based Rad Power Bikes thinks it has just the answer in the form of its monstrous RadRhino – a fat-tyred eBike that looks like a Frankenstein mash-up of a scrambler and a step-through town bicycle. Fresh out of coffee (as per), we decided to gear up and hop on the Rhino’s back in search of caffeine and cake at our local cliff-side café.

One leisurely blast on the RadRhino is enough to make you realise why eBikes are taking over as the next generation of commuter vehicle. In this day and age of clogged school runs and frantic SUVS, the ability to squeeze through static traffic with minimal effort is refreshing to say the very least. With vehicles moving at an average of 5mph in our neck of the woods, the Rhino’s 750W Bafang geared hub motor assists the pedals and leaves passers-by slack-jawed in amazement. 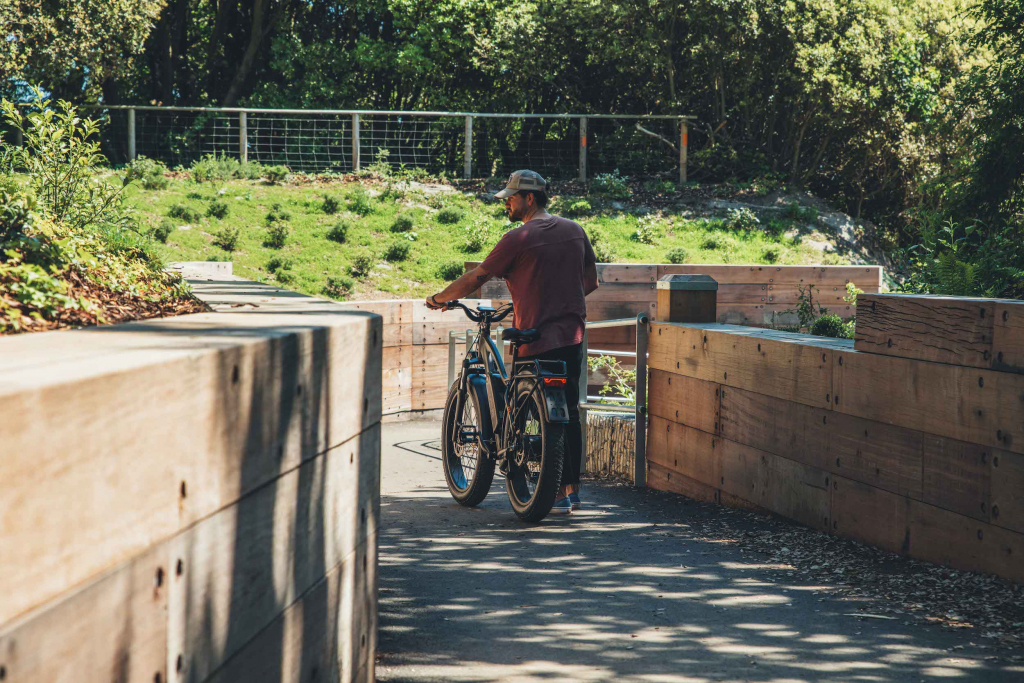 The Rhino, depending on whether you’re feeling energetic, will pump out (limited) speeds up to 16mph with its 5-level pedal assist system, all of which is monitored and controlled through a sleek LCD display mounted to the bars. Simply cycle up and down the assistance levels via a couple of rubbery plus and minus buttons and the rest is easy.

“There’s always a governing body looking to spoil the fun and in the case of the RadRhino, it’s the 2017 L1e-A electric bike category”

But unlike many other eBikes in the UK, the RadRhino also offers a twist throttle system, which means it straddles a bit of a grey area in terms of legalities (more on that later) but it allows the legs to be completely rested, if you’re that lazy. The plastic snap back throttle unleashes the full 750W and will accelerate until the bike reaches its 16mph limit. All you have to do is keep the thing pointed in the right direction.

Built for a battering

Once we’d finished scoffing our faces with a hefty slice of carrot cake and refuelled the coffee tanks, we decided to take the Rhino for an off-road razz in the sand dunes. Although it’s not the quickest eBike on the market, it very quickly becomes apparent that what the Rhino lacks in speed, it makes up for in serious levels of durability. 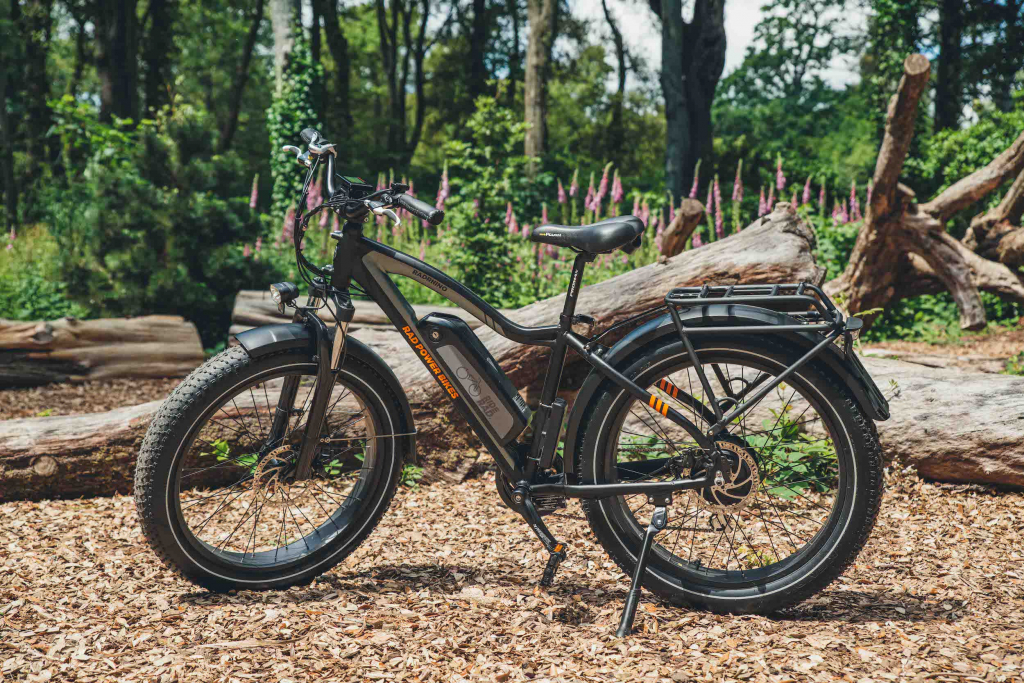 The hefty set of puncture resistant four-inch Kenda K-Shield knobbled tyres glide over the pebbles, while the front suspension boasts around 80mm of travel. Okay, so it won’t bother any serious downhill machines just yet, but those fat tyres and a little bit of bump resistance means it easily doubles-up as an excellent beach bike – perfect for harassing a few sunbathers in the summer months.

“Starting at around £1,500, the RadRhino feels like excellent value for money to us”

On top of this, the Rhinos sturdy frame and forks are built from an aluminium alloy that the Seattle natives have purposely manufactured to conquer challenging terrain. At 32kg, it is a heavy old beast, but so long as you don’t have to physically carry the bike anywhere, that powerful rear hub motor will make mincemeat out of most surfaces.

There’s a solid carry rack at the rear of the bike, which happily accommodates child seats and other baskets. The frame itself is a slightly bizarre shape for attaching surf racks and the like, but we managed to fashion something to this rear bit of metal to carry a small surfboard. The result is one of the quickest ways to head to the beach and catch a few waves. Oh, and you don’t have to pay for parking. 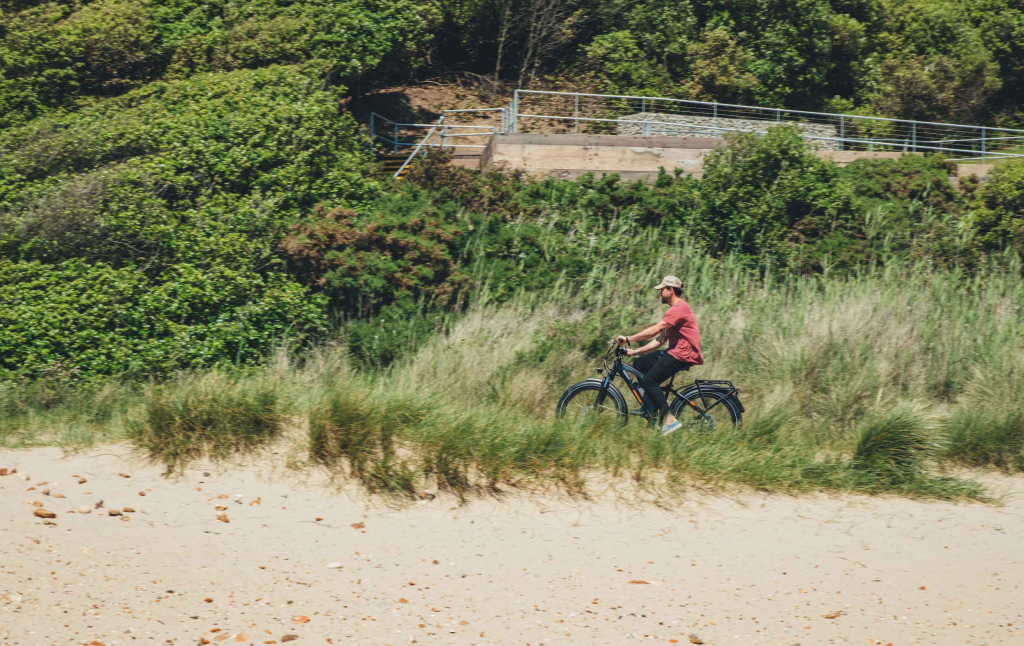 After a solid hour or so of riding, we decided it would be a good shout to check power levels and make sure we had a way to get back to HQ. With a simple check, the built-in charge indicator told us we were still at about 90% charge. Impressive, considering the thrashing the Rhino had already taken.

The brains behind the RadRhino assure us that the bike has an estimated range of 40-miles of mixed riding, all delivered through the slim 48V Samsung Lithium battery that clips neatly onto the frame. You haven’t got long to wait for full charge either. Just plug in the 2-Amp Smart Charger for five or six hours on a Sunday evening and your commute-conquering Rhino should be good to go for the rest of the week. 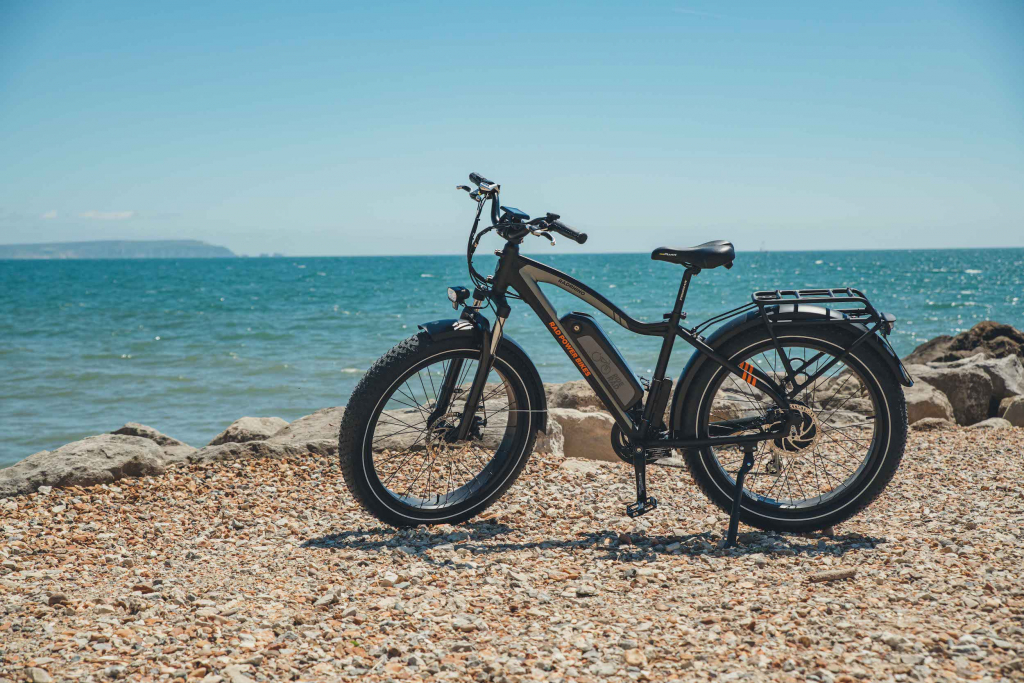 Fear not though, if you live that bit further away from work or there’s a decent swell lined up for the week at your local surf break, you can monitor performance through the LCD display included with the Rhino. The nifty little screen will provide you with a speedometer and odometer. Handy whether when you’re measuring the miles you’ve travelled, or like us, trying to beat your personal best speed on the way back down a favoured hill.

Night riding is not off the cards either, seeing as the crew at Rad Power Bikes have incorporated a sleek set of integrated head and tail lights that are compliant with new EU safety regulations. Their final touch to the Rhinos safety features is something usually not found on a regular eBike. The team have ensured that power to the bike is cut as soon as the brakes are engaged, which is their way of making sure you’re always in full control of the Rhino.

Starting at around £1,500, the RadRhino feels like excellent value for money to us. It smashes the flimsy sub-£1,000 eBikes we’ve already tried and offers the sort of power that can be found on much more expensive mountain bikes from the likes of Giant and Specialized. 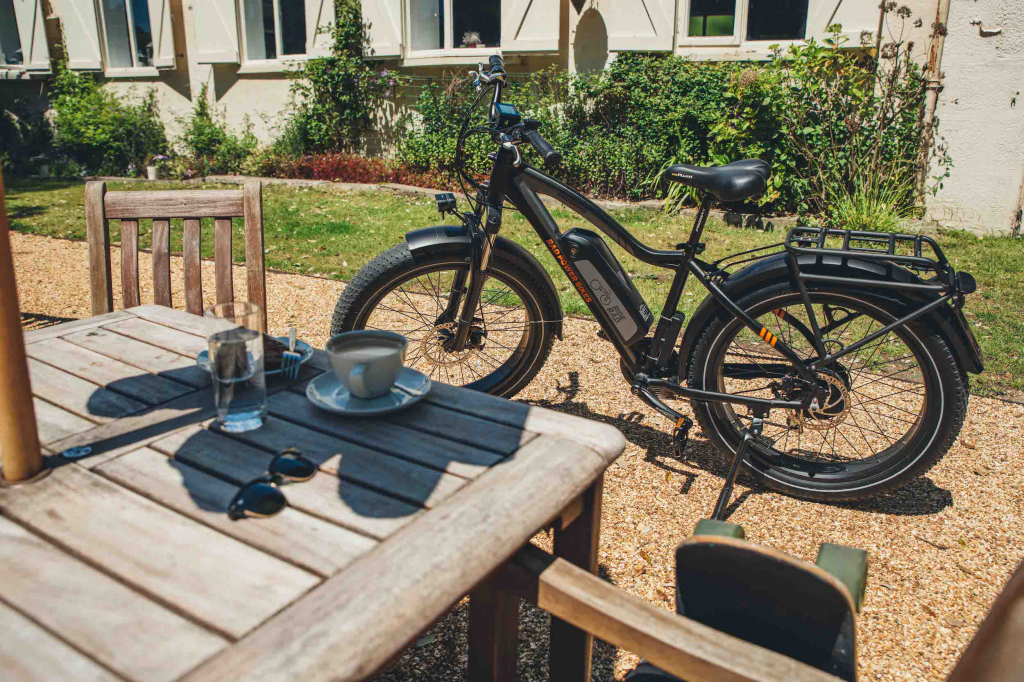 That said, there’s always a governing body looking to spoil the fun and in the case of the RadRhino, it’s the 2017 L1e-A electric bike category that states anything with a twist throttle needs to be properly registered and insured for use on the road.

This goes some way to also explaining the irksome 16mph top speed limitations (it could easily do double that) and the fact that it has a big old mount for a licence plate on the rear mudguard. But as well as denying us of some face-melting speed, the L1e-A category also means that in many countries, the RadRhino will have to be registered with the correct authorities (in the UK’s case, it’s the DVLA) and receive the appropriate paperwork.

But we have already been assured that Rad Power Bikes will assist in this, with the application cost amounting to around £55 through the DVAL. Although, word on the grapevine has it that many applications for L1e-A bikes in the UK have already been sent back to the owners, as the authorities are still a little confused as to what exactly the whole thing means. 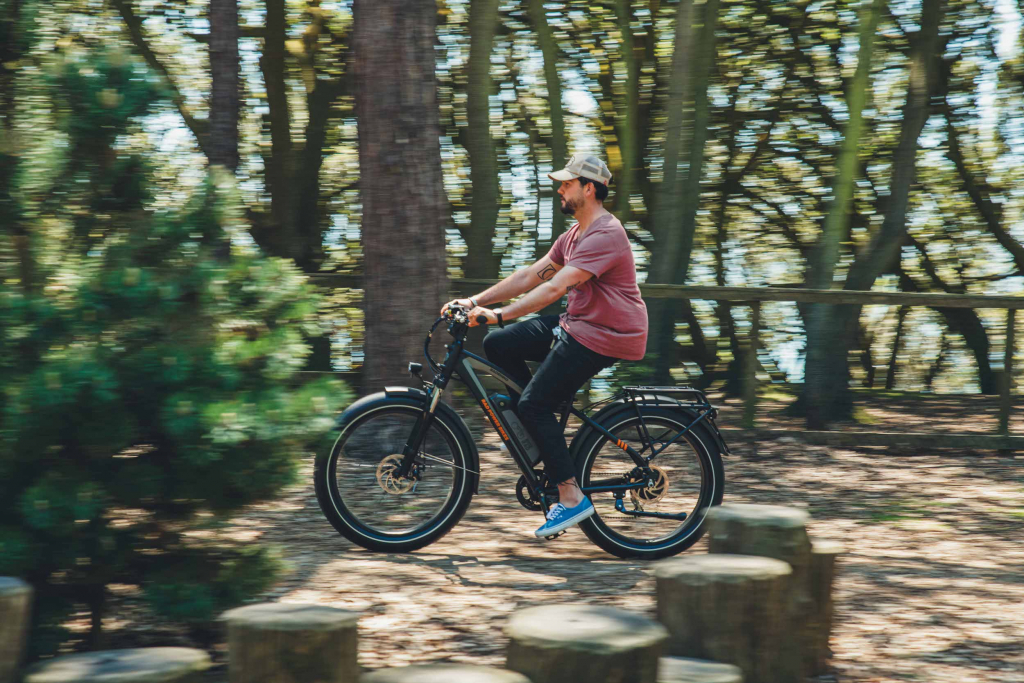 Basically, so long as your legs are spinning around and the Old Bill don’t look too closely at your eBike, you’re fine to slash through the summer crowds with electrically-assisted abandon. We know we certainly did.