Nestled in amongst some of southern France’s finest coastal towns, the Principality of Monaco sits nonchalantly on a hillside. This microstate measures just two square kilometres and its 30,000-plus inhabitants ensures it is the most densely populated country in the world. It also has the highest life expectancy of 89.5 years, which probably has something to do with the fact that 32. per cent of those calling Monaco their home are millionaires.

Forget the fact it has its own flag (and tax laws), this place should boast its own solar system, so different is it from anywhere else on Planet Earth. So great is the concentration of wealth in Monaco, a Ferrari is regarded as daily runaround. That’s no exaggeration either, as during a gentle stroll along the main marina, I witnessed an octogenarian pull up outside a row of shops in what can only be described as the most used and abused 458 in existence. In Monaco, a 562bhp supercar is essentially doubles-up as a Nissan Micra.

It comes as no surprise that purveyors of luxury, Bentley, selected this diminutive wealth bubble as a location to launch its latest £168,300 Flying Spur – the luxurious grand touring sedan that bridges the gap between the more driver-focused Continental GT and the mammoth Mulsanne. 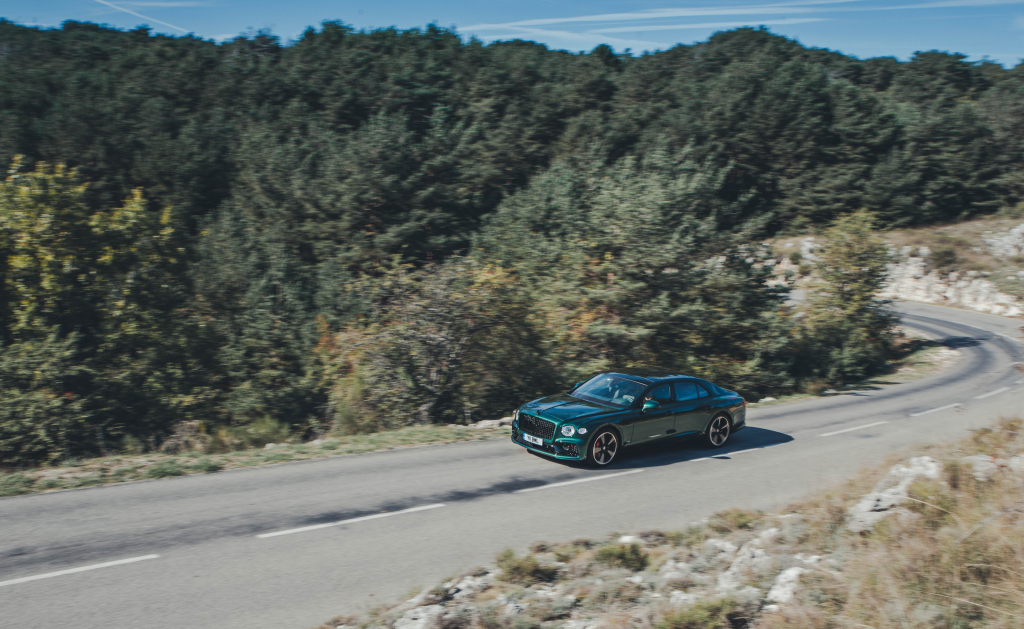 Like the aforementioned Conti GT, almost everything on the third generation Flying Spur has been overhauled and refreshed, starting with the brilliantly purposeful styling. Every haunch and power line has been deliberately enhanced, while alloy wheel options now extend to a whopping 22-inches in the Mulliner Specification rim.

At the front of the car, Bentley has pinched an idea from fierce rivals Rolls-Royce with the world’s first electronically retractable Flying B mascot. Bentley’s Product Line Director Peter Guest claims that decision alone caused his engineers many hours of sleepless nights. Apparently, creating a trick mascot that can lower itself in a matter of milliseconds in the case of an accident isn’t particularly easy, while packaging the mechanicals for that is even harder.

But that’s the theme here, as Bentley decided to take the most arduous route throughout the development process in order to create something truly special. The rear body-side panel, for example, is the largest superformed aluminium panel in the automotive industry. Chief designer Stefan Sielaff admits he refused to budge on a number of decisions and it has paid off. 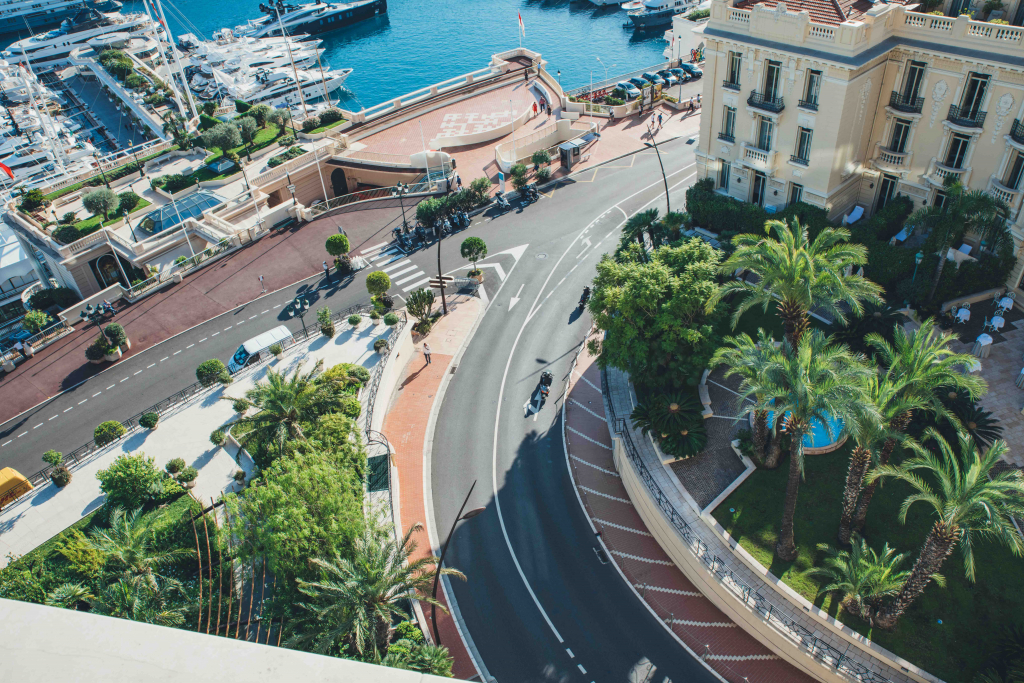 When specified in Bentley’s recent Black Line, which rids the car of its slightly stuffy chrome chintziness, the Flying Spur cuts a menacing figure on the open road, yet manages to remain a properly plush place to slide into.

A view from the back

The first experience with Bentley’s super-luxe sedan starts with a ride in the back. A huge proportion of Bentley owners choose to drive themselves (compared to Rolls-Royce owners, anyway), but there’s no escaping the fact many of them still have access to “a man” for special occasions.

Collection from Nice airport is one such scenario where a chauffeur comes in handy and the wide aperture doors offer a glimpse into the leather-clad interior, which still features the trademark wooden veneers and hefty chrome accents of this quintessentially British marque. 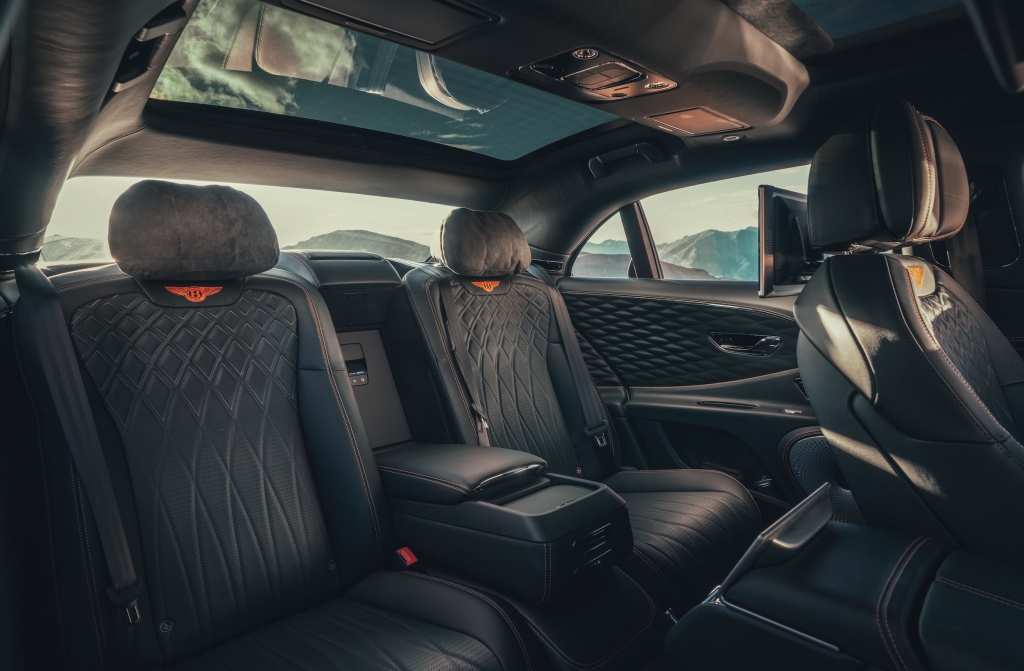 The sumptuous rear seats are as comfortable as ever, offering both cooling and heating functionality, as well as a myriad message modes. Perhaps the most pertinent addition is a new five-inch colour Touch Screen Remote control that seamlessly blends into the rear centre console.

A quick tap of the eject button and it majestically rises from the console, allowing the rear passenger to grab the weighty device and control numerous functions, including the rear-seat entertainment screens.

It also controls the climate, ambient lighting and sat nav system, should an argument break out between passenger and driver about the quickest way to get to Saville Row… or something. 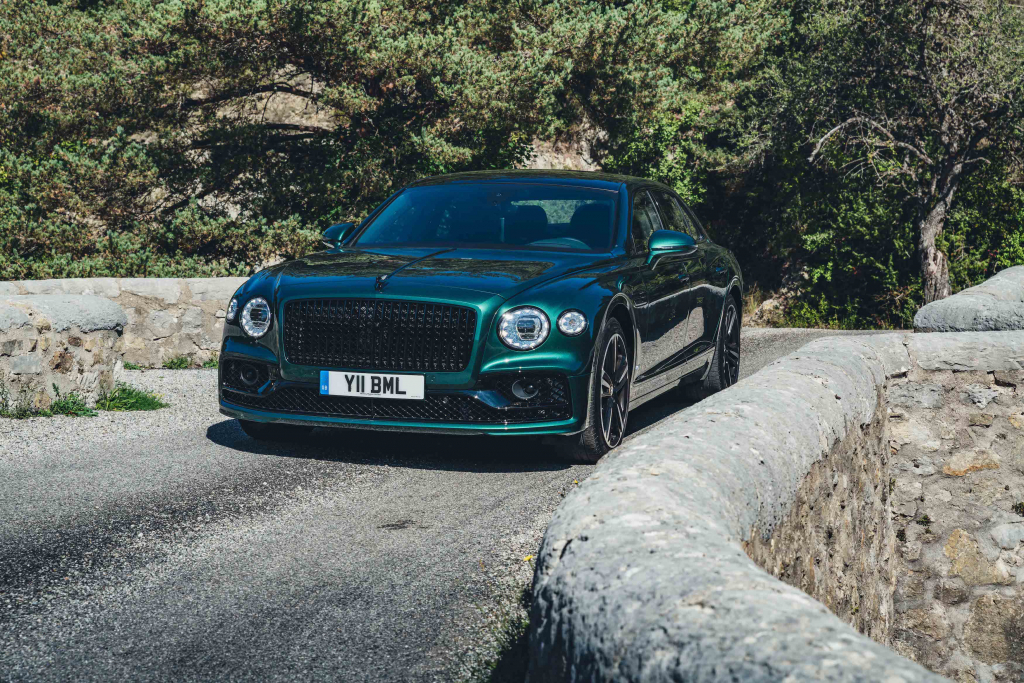 The ride is pillowy soft and it’s tempting to sink back into the seat and grab forty winks as the Big Bentley silently wafts through the unrelenting Monaco rush hour traffic. Flick a switch, raise the privacy blinds and enter full plebeian protection mode.

Clearly, the ultra luxurious Flying Spur fits in with the Monaco set, but this is the home of the hypercar and fierce one-upmanship among the local community means not owning the latest generation performance machine is regarded as a social faux pas. 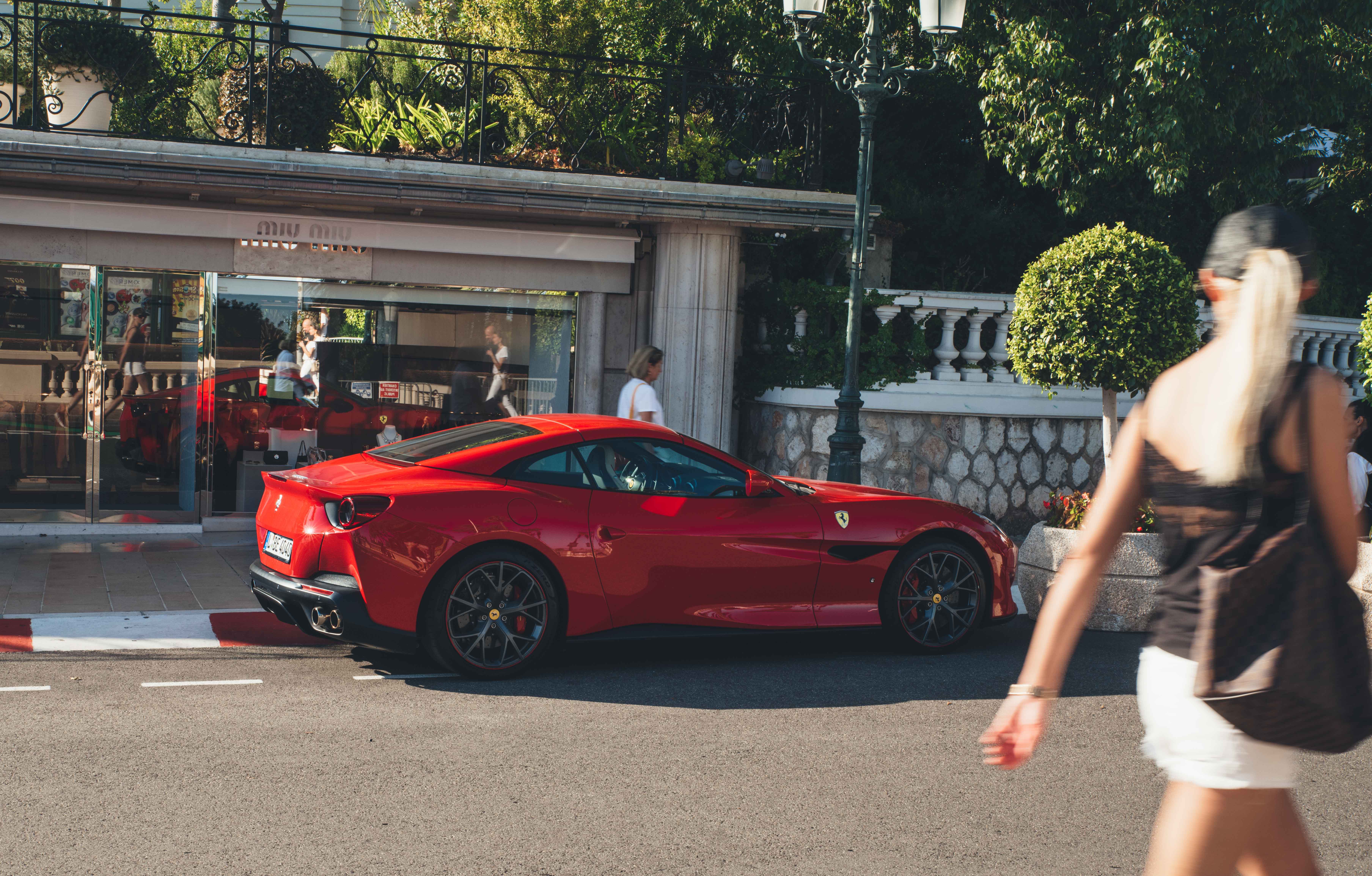 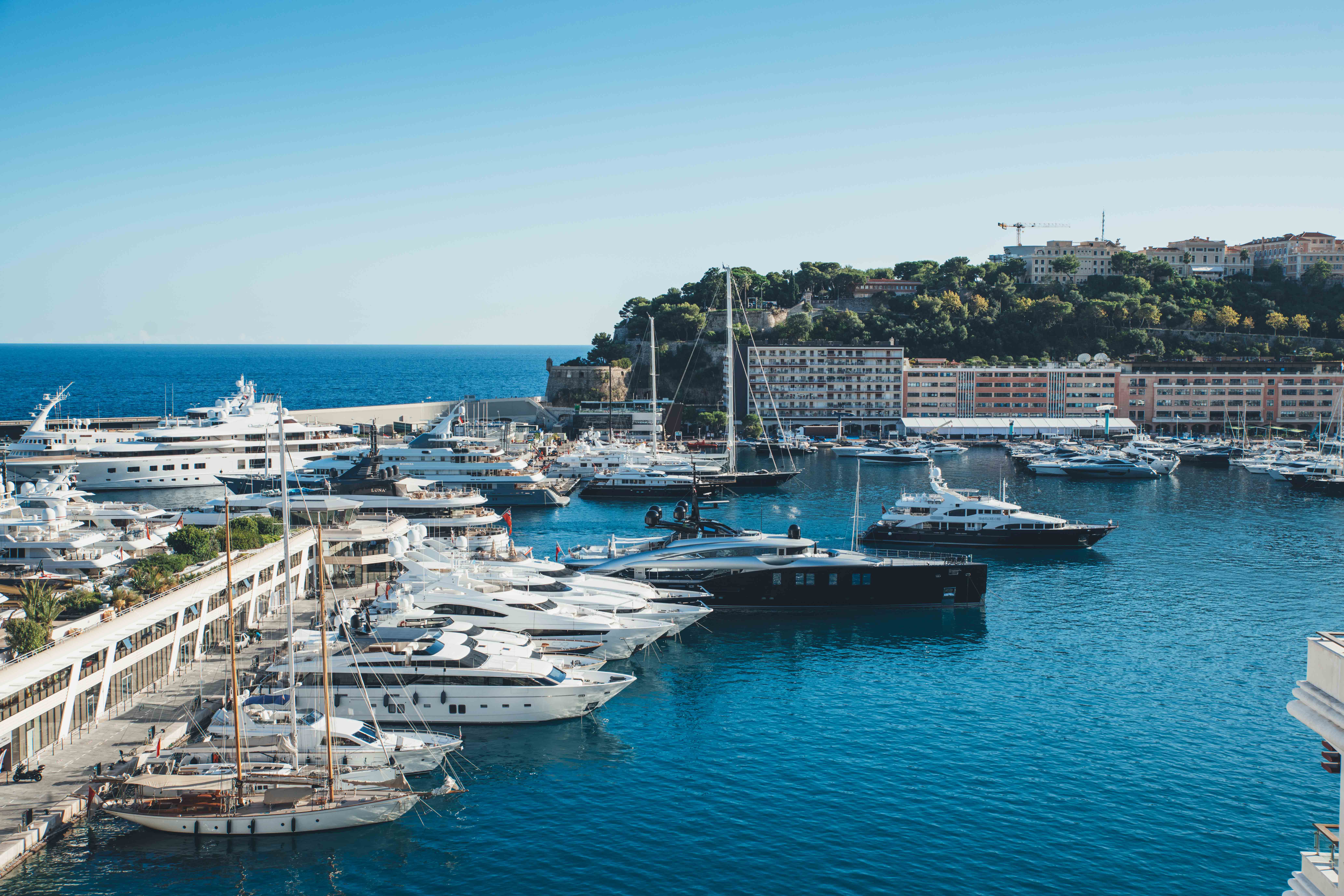 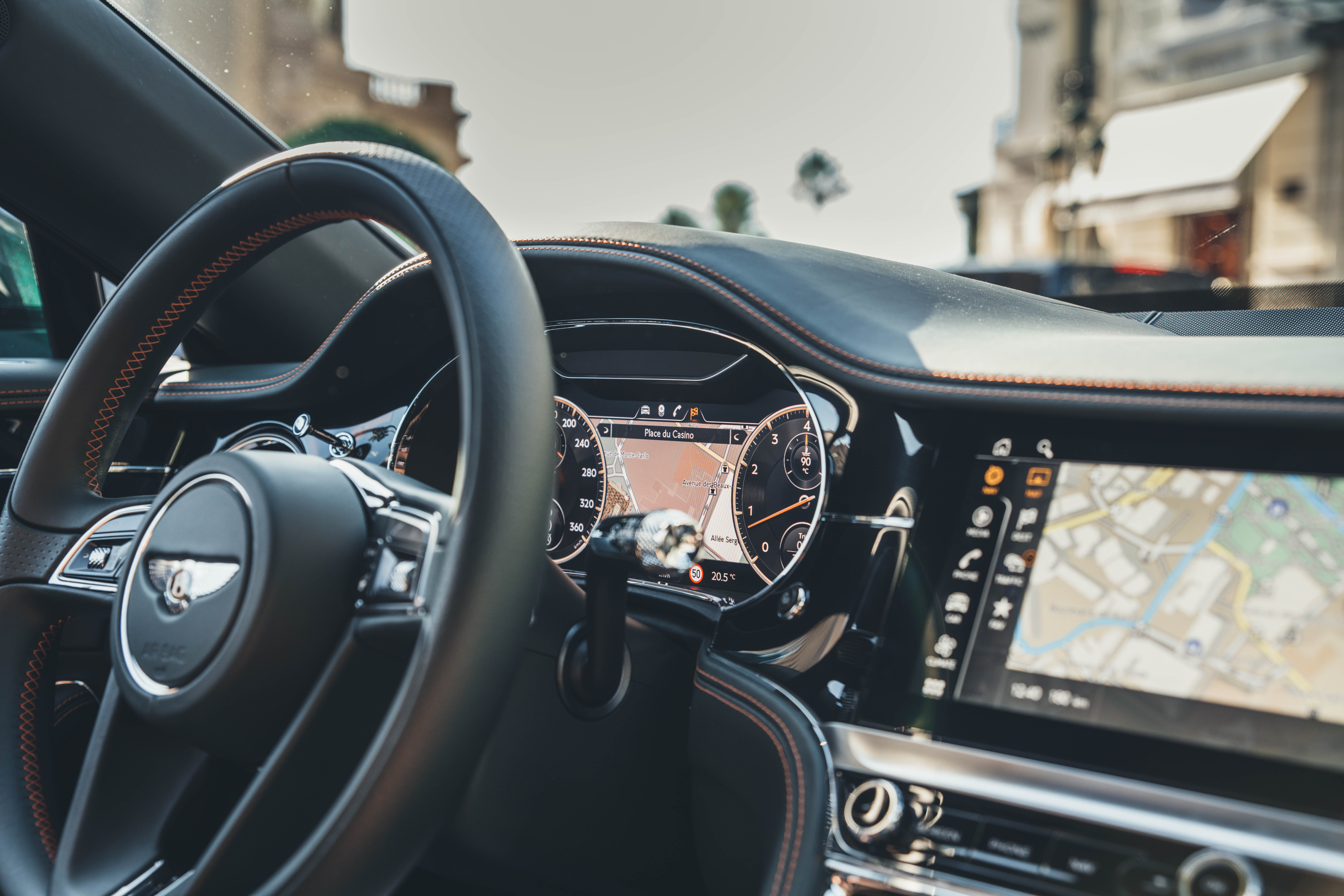 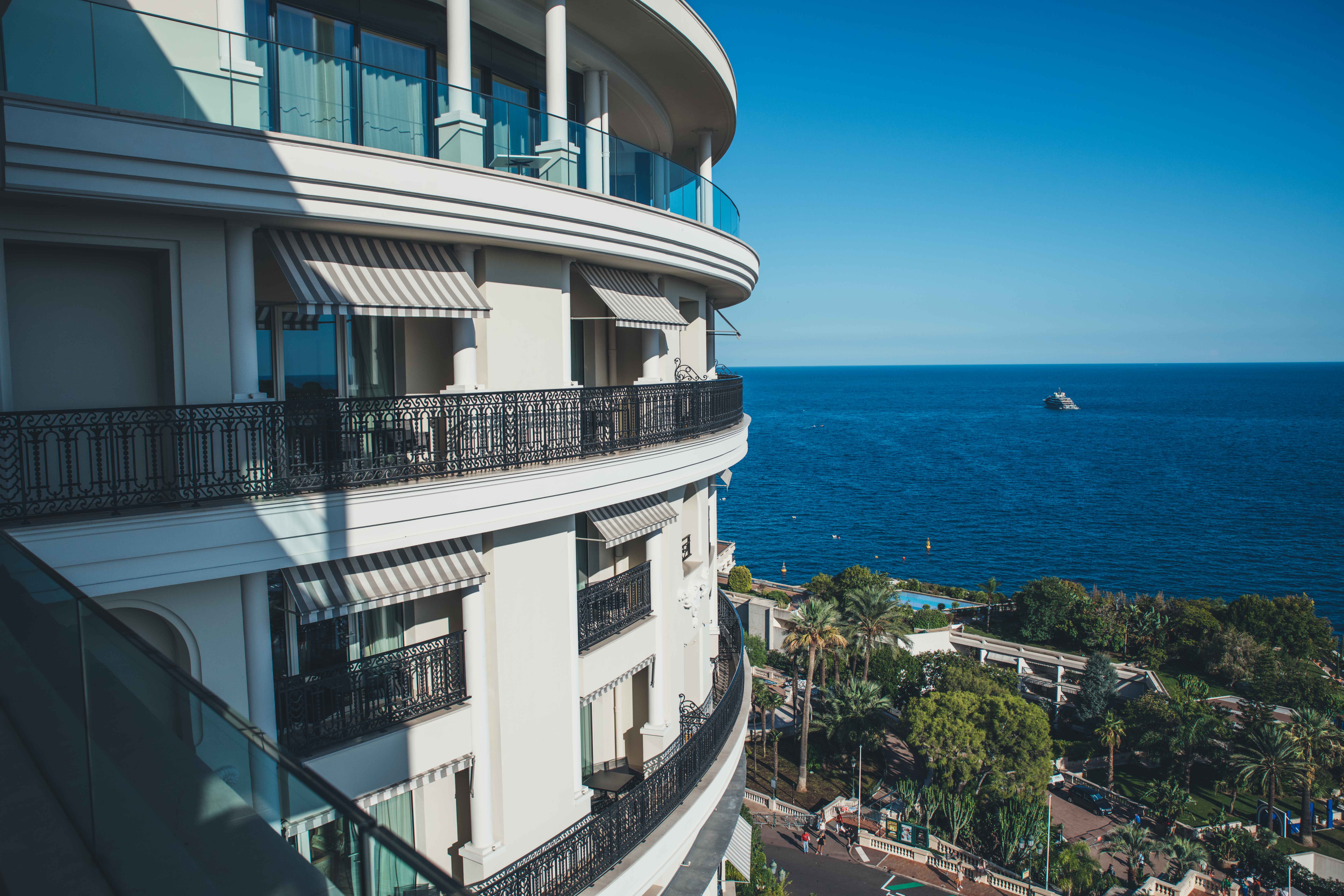 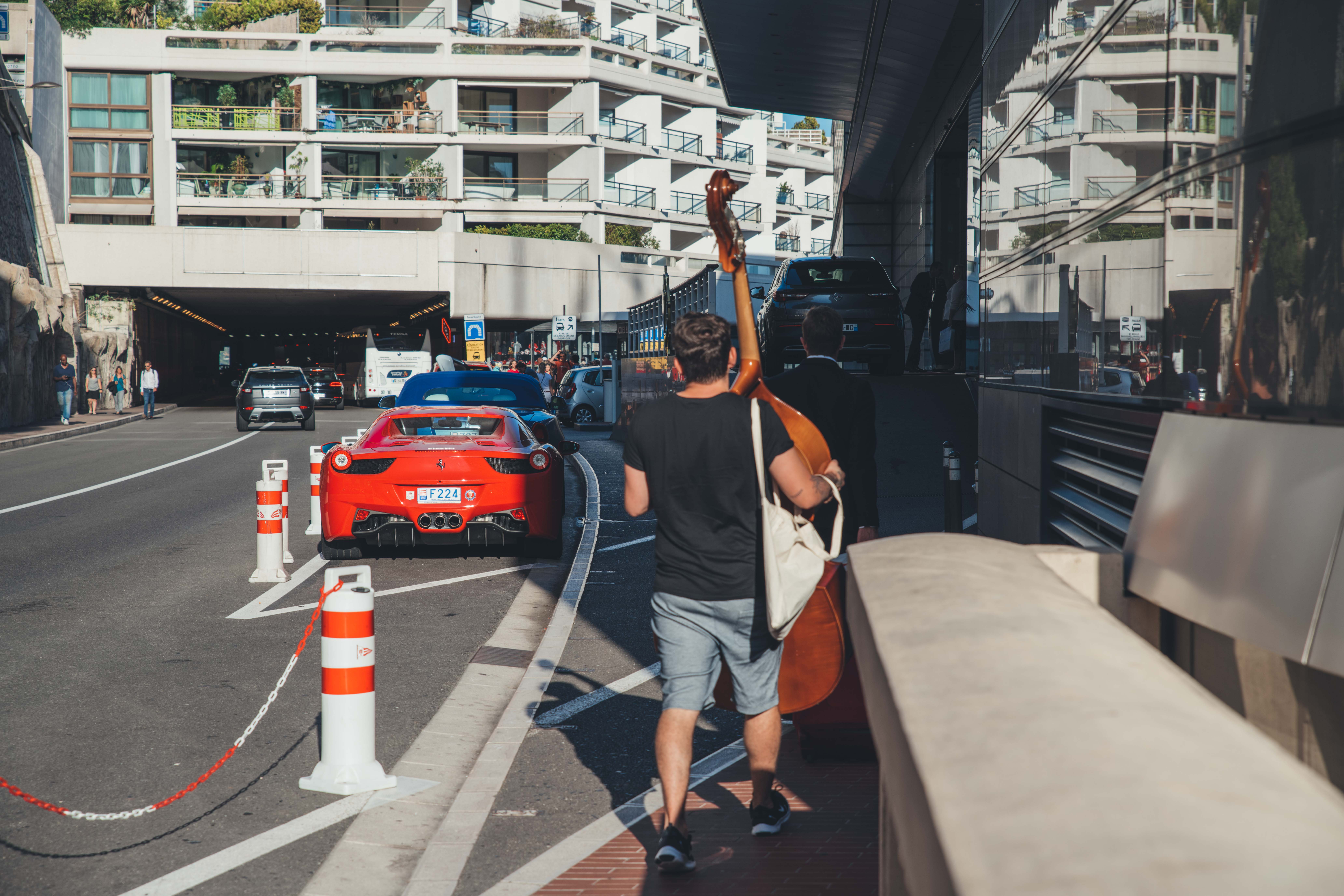 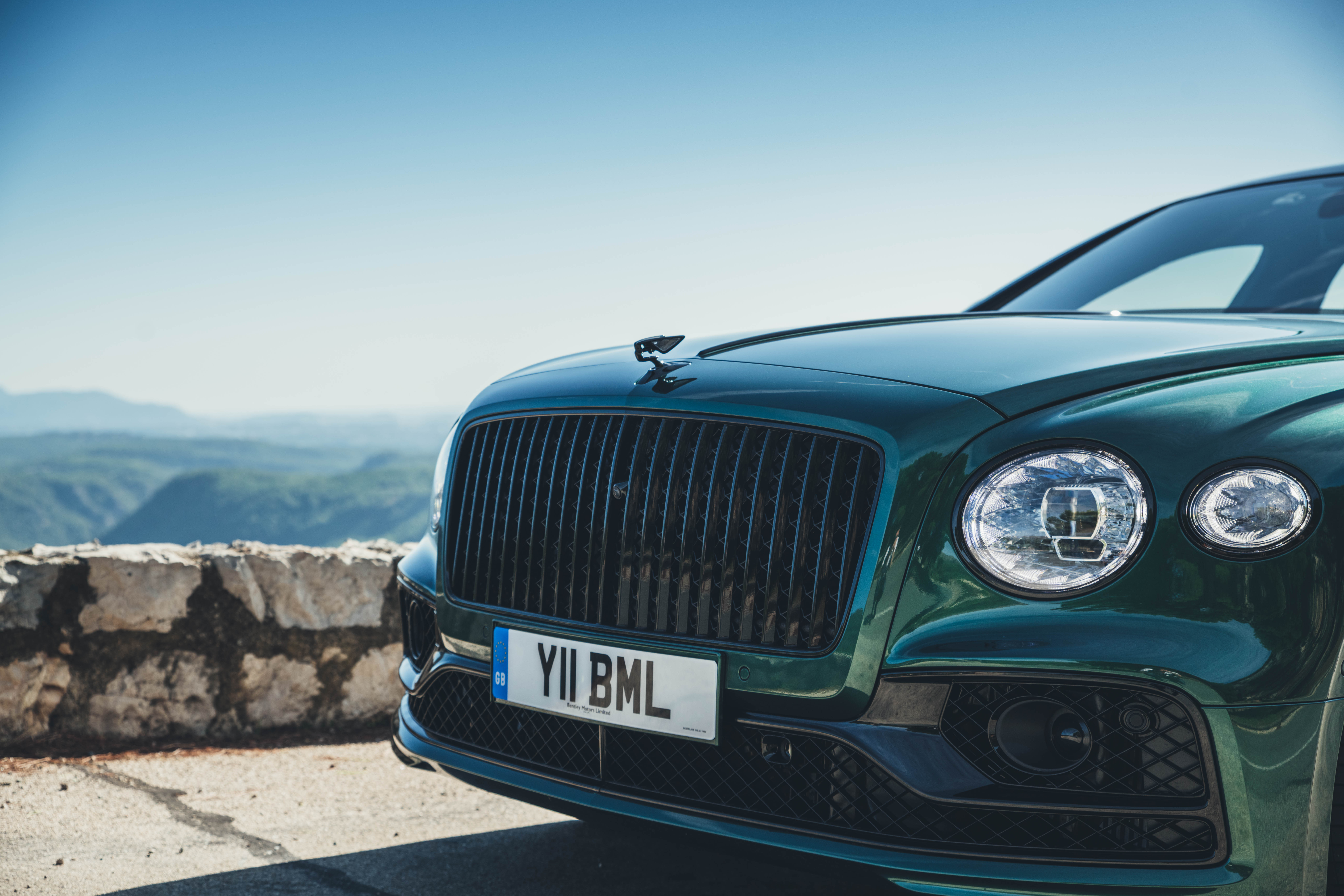 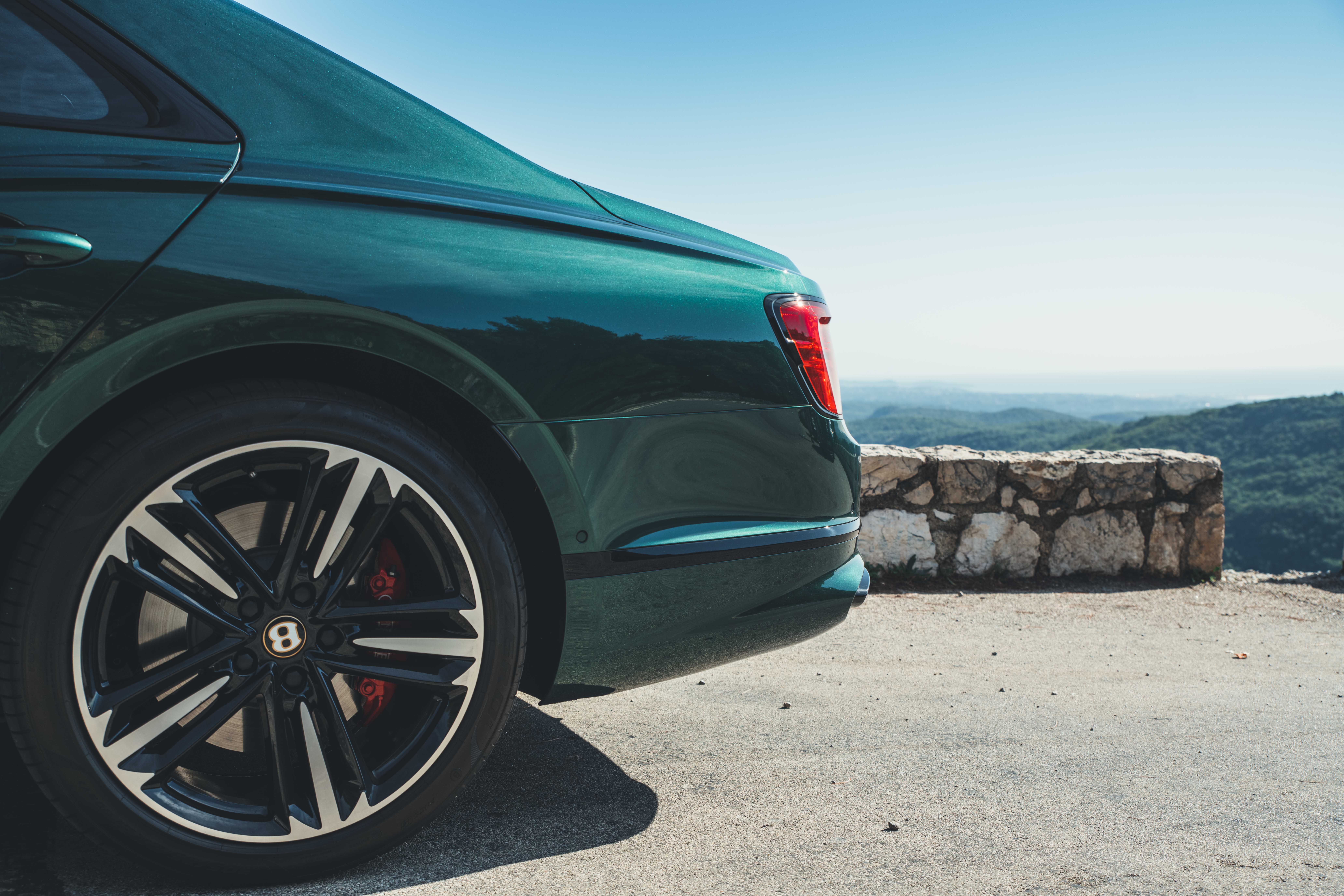 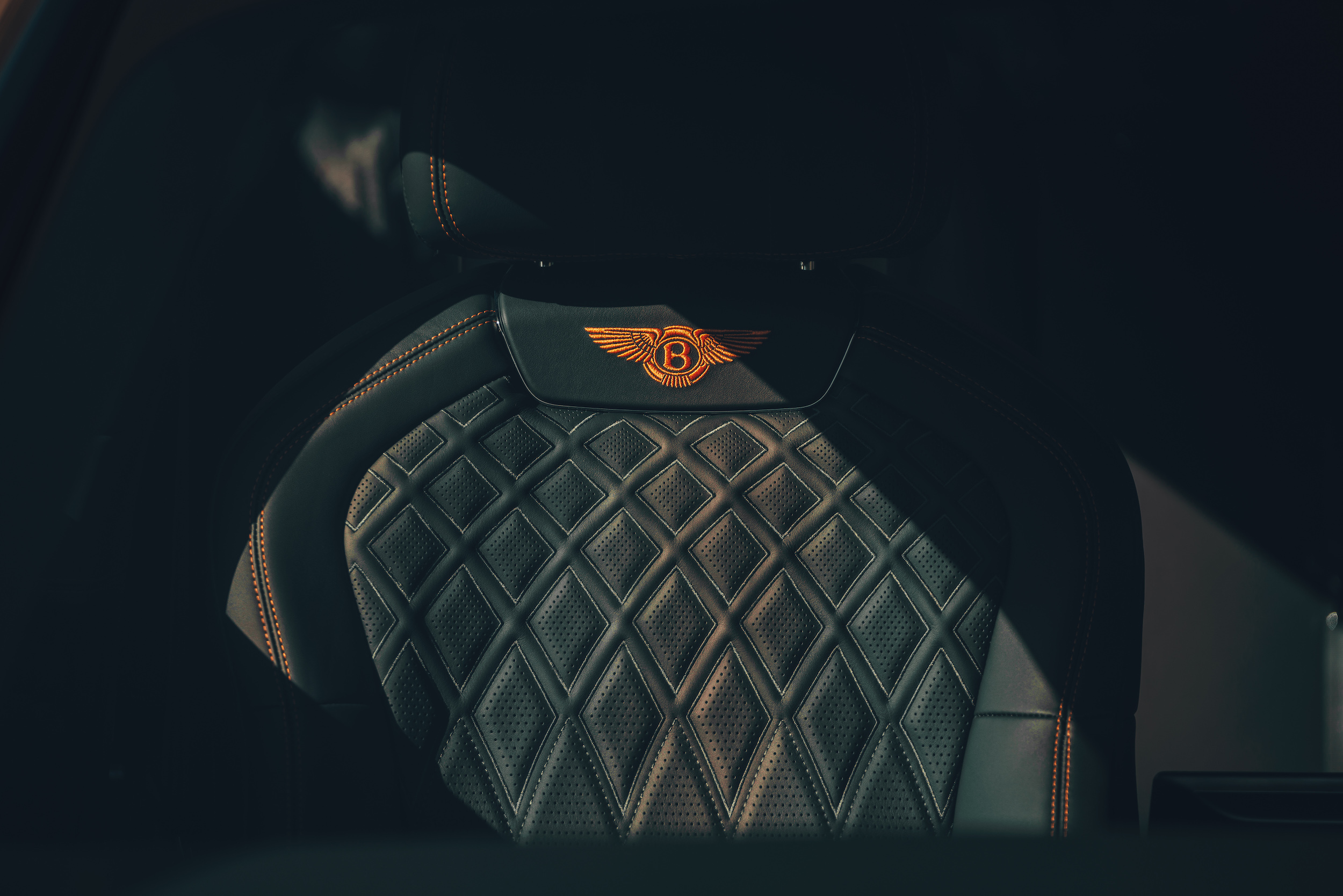 Even with its trademark 626bhp 6.0-litre twin-turbocharged W12 engine underneath the elongated bonnet, controlling Airbus kerb weight on the open road is a challenge in itself. Plus, the routes that Bentley has selected for this particular test drive are more often used by Monaco residents to test the handling chops of a new Lamborghini, rather than offer a comfortable cruise to a private beach in Antibes.

Once away from the unmistakable tunnels and hills of Monaco, the route affords an opportunity to punch the right pedal and enjoy the 900Nm of torque produced by the mammoth powerplant. Acceleration is understandably urgent (it dispatches of the 0-60mph sprint in 3.7 seconds, for God’s sake), but the big Bentley hits eye-watering speeds with little fuss or drama. It’s a case of right foot pinned/concept of space and time warped.

However, it is not long before the roads start snaking up mountainsides and become bum-clenchingly narrow. This is not the Flying Spur’s natural environment but it is beyond impressive how well it handles the challenge. 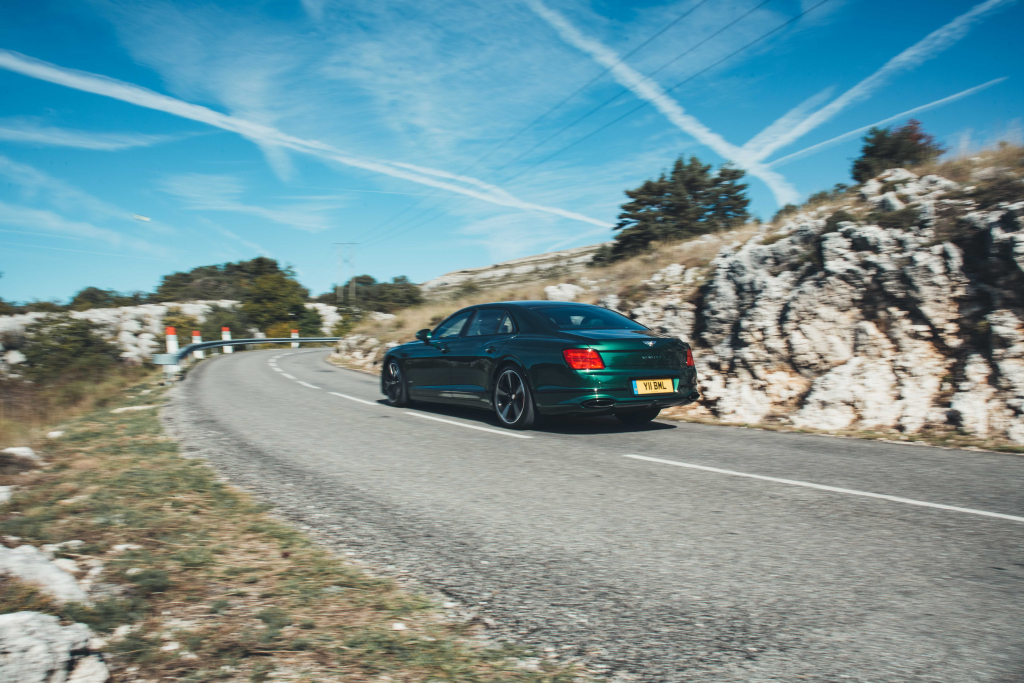 This is thanks, in part, to a the world-first Bentley Dynamic Ride System, which is shared with the recent Continental GT and sees a 48V system control electronic actuators on the roll bar of each axle. In short, the stiffness of the bar can be altered in milliseconds, almost eliminating any body roll and allowing the Flying Spur to belie its size and waltz through corners.

All-wheel-steering, similar to the system that Porsche debuted on its 911, makes low speed manoeuvring much easier, but it also improves the vehicle dynamics when the roads start to get interesting. Close your eyes (not really recommended when driving) and you’d be forgiven for thinking you were behind the wheel of a Continental GT, albeit a lightly larger and heavier version.

“Like the Conti GT, almost everything on the third generation Flying Spur has been overhauled”

Despite boasting the largest iron brakes in the world (420mm, fact fans), the latest Flying Spur understandably takes some time to scrub off the speed. This is arguably where the supercar comparisons really come unstuck, but it’s still hugely impressive nonetheless. 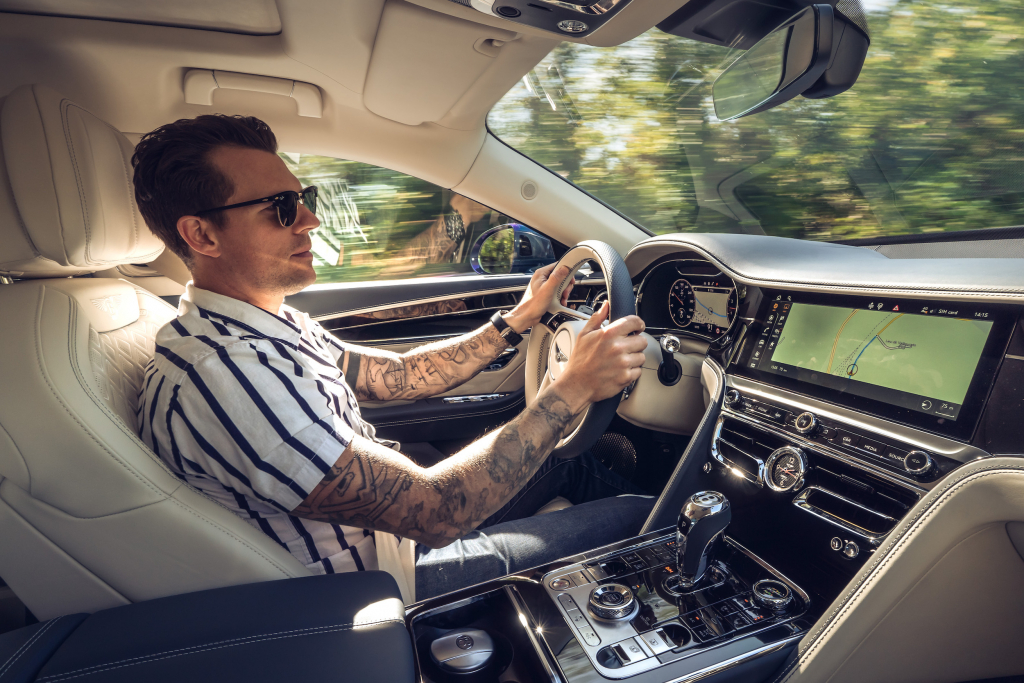 The fact that a vehicle of this size and weight can raise a smile on some of Provence’s most challenging roads – and then settle back into one of the most luxurious cruisers in the world – is a feat in itself.

Comparisons between Bentley and Rolls-Royce are inevitable, despite the gulf in pricing, but the latest Flying Spur proves that it is the driver’s choice of super sedan, offering ride, handling and gut-busting acceleration that almost feel at odds with its generally wafting demeanour.

Alas, only those with Monaco-friendly bank balances will likely ever experience this level of craftsmanship, while an even smaller percentage of those lucky owners will ever unleash the full performance capabilities, but it’s surely comforting for the super rich of this world to know their money has been very well spent.