The sun is shining as we pull into the courtyard of Ariel Motor Company. A thin strip of vitamin D-inducing light falls in front of a set of large roller doors and there, sat on the tarmac floor, is the entire Ariel workforce – every man and woman with a steaming hot mug of tea in his or her hands.

Suddenly, the crowd parts and a figure majestically appears from the throng of red-shirted employees. He thrusts an outstretched hand in our direction and introduces himself simply as Tom. “Would you like a cup of tea?” he says without hesitation.

Tom Siebert is the general manager at Ariel Motors and the son of Simon Saunders, the man responsible for reviving an ancient British automotive brand from the archives and building a company whose impact on the motoring world belies its size. 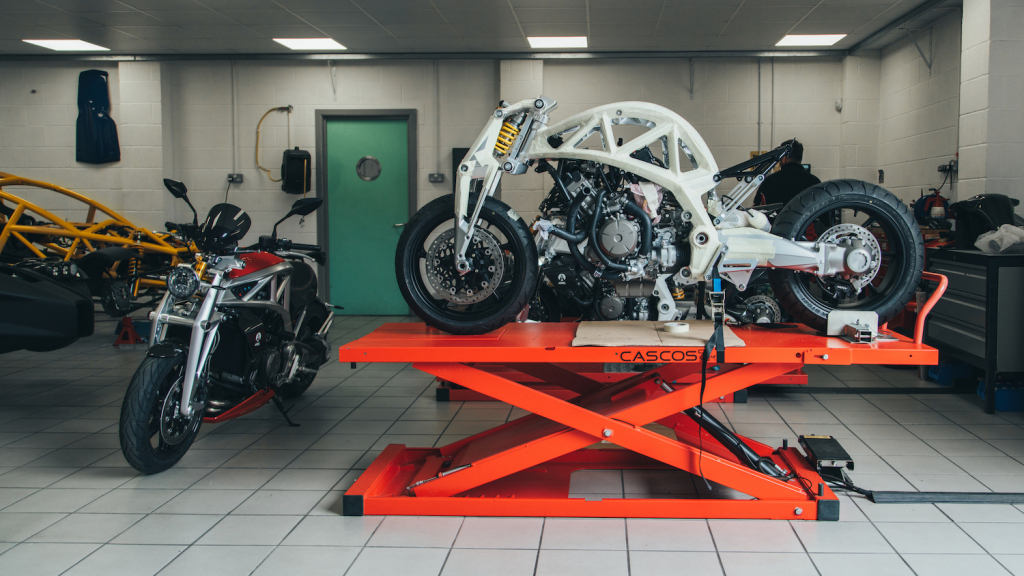 “Ariel has actually been making motorised vehicles since the early 1900s,” Tom explains, as he walks around some of the historical models on display in the company’s small but perfectly formed reception area.

Tom’s father wanted to resurrect the brand because of its motorcycling heritage and Ariel’s success in racing, particularly the off-road variety (thanks to trials riding legend Sammy Miller), while also ensuring that marque had a rich history in four wheels.

“With tea break over, the Ariel staff busy themselves with the numerous builds currently in progress”

Head to a room at the back of Ariel’s facility and you’ll be greeted by one of the original quadricycles from 1900. Its wooden wheels, Dion 344cc engine and pneumatic tyres are a far cry from the stuff rolling off the production line today.

Ariel’s current line-up requires little introduction, as the all-conquering Atom made an immediate impact when it first launched back in the year 2000. “My dad wanted to create a lightweight sports car that could dominate on the circuit, but also bring down the cost of track days by reducing the stress on tyres and brakes,” Tom explains.

Powered by a 190bhp Rover K Series 1800cc engine, the earliest Atoms cemented the fact that lightweight and low power could equate to enormous grins. Later models adopted Honda engines, which continue to this day, with the most banzai of which boasting a 3.0L or 3.2L V8 that pushes out 475bhp or 500bhp and can rocket from 0-60mph in 2.3 seconds. Undoubtedly mental.

However, an insane, chunky-tyred Nomad then followed, with a long list of automotive writers and influencers queuing up to vouch for its ludicrously fun drive and mud-plugging prowess. 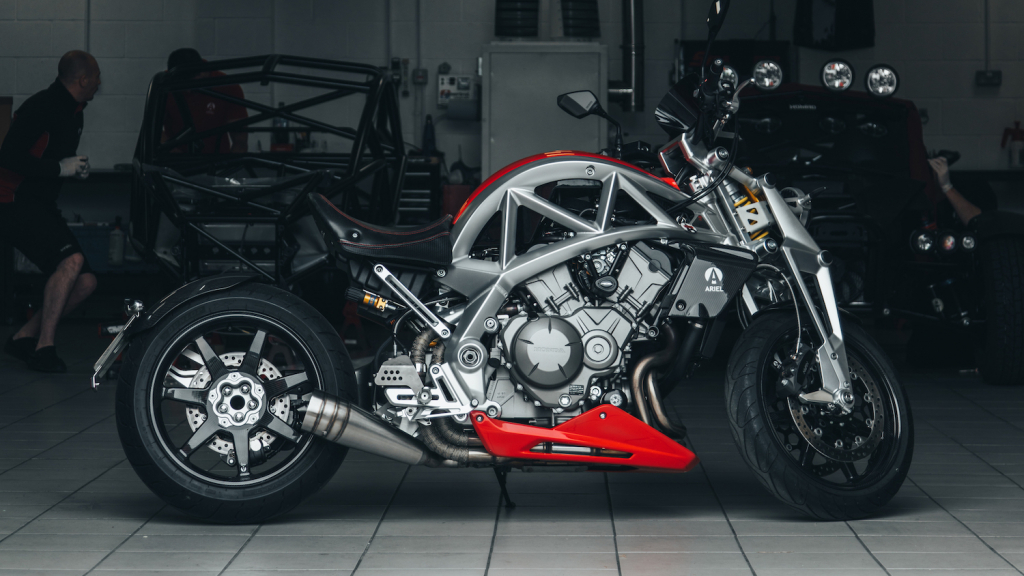 But the line-up wouldn’t be complete until Ariel turned its attention to two wheels. “We are all motorcycling nuts here and always wanted to make a bike,” says Tom, revealing that he used to race to a high level in his youth.

“Every frame is milled from solid billet aluminium and takes around 70 hours of machining, welding by hand and anodising to finish”

The brutish Ace was the result of this desire to “do what we want”, as Tom puts it, and its hulking frame, innovative girder forks, £20k price tag and unforgettable soundtrack ensure it is like little else available in the motorcycling world.

Ace in the pack

With tea break over, the Ariel staff busy themselves with the numerous builds currently in progress. A Nomad is having its engine fitted, several Ace motorcycles are in various states of completion and a bright yellow Atom is having the finishing touches applied. 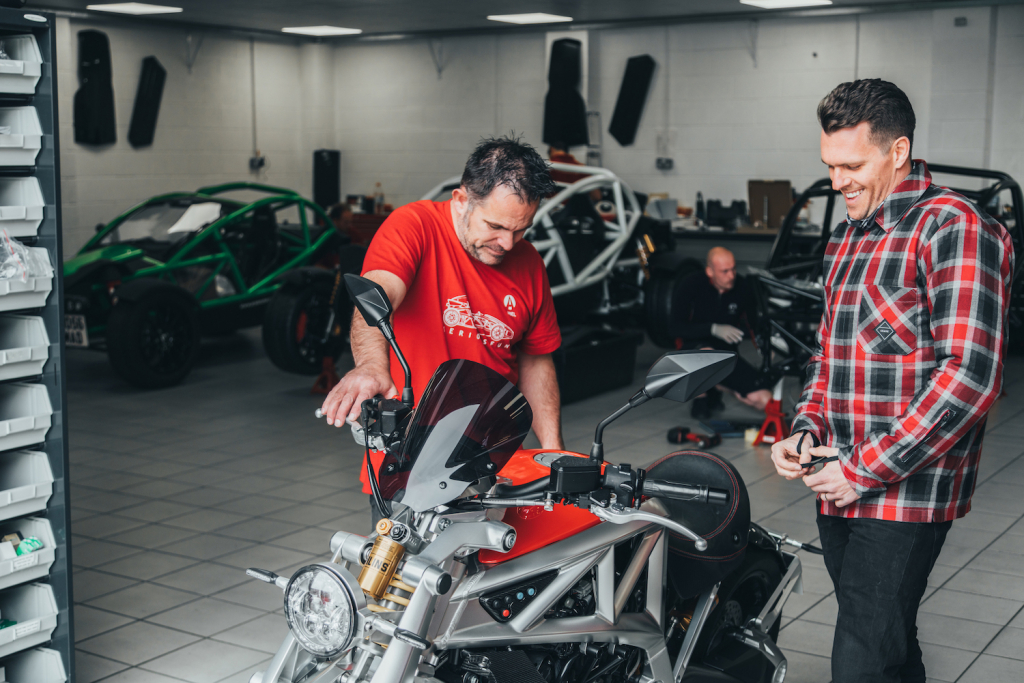 Sat in the centre of this extremely clean workshop is a red Ace, decked out in a comfortable ‘Cruiser’ spec but appearing no less intimidating and brutish as those with sportier front forks, bars and seating positions.

The bike itself is powered by Honda’s beefy 1237cc V4 engine, which has been used in the VFR 1200 and kicks out 173bhp, but looks and feels more unhinged when surrounded by Ariel’s beautiful aluminium perimeter frame.

“Every frame is milled from solid billet aluminium and takes around 70 hours of machining, welding by hand and anodising to finish,” explains Tom, as we crowd around an Ace that is being fitted with its signature exhaust pipe. 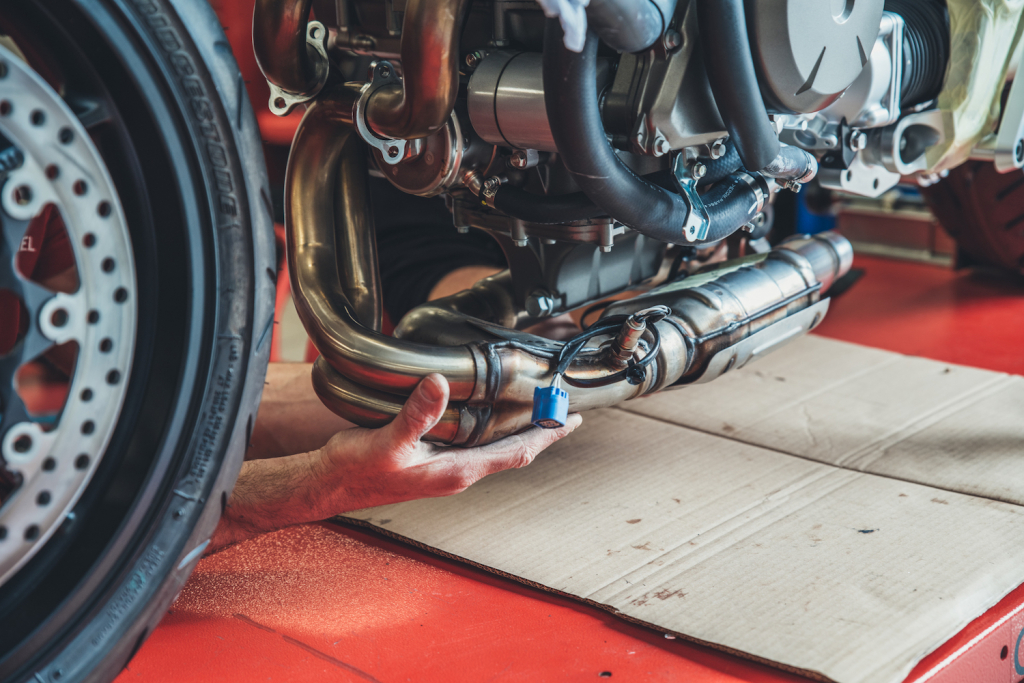 The frame certainly catches the eye in photos or when passing, but its exquisiteness can only really be appreciated from up close, where the precision of every weld and the texture of this hunk of metal come to life.

It is difficult to avoid the subject of cost when talking about Ace, as £20,000 for a motorbike will seem like madness to most, but every bike is a work of art and can be personalised to the highest levels.

Numerous seats, front shocks, exhausts, transmissions, bars, tanks, foot controls, wheels and bodywork flourishes are offered to the customer and it is rare to find two Aces that look identical. 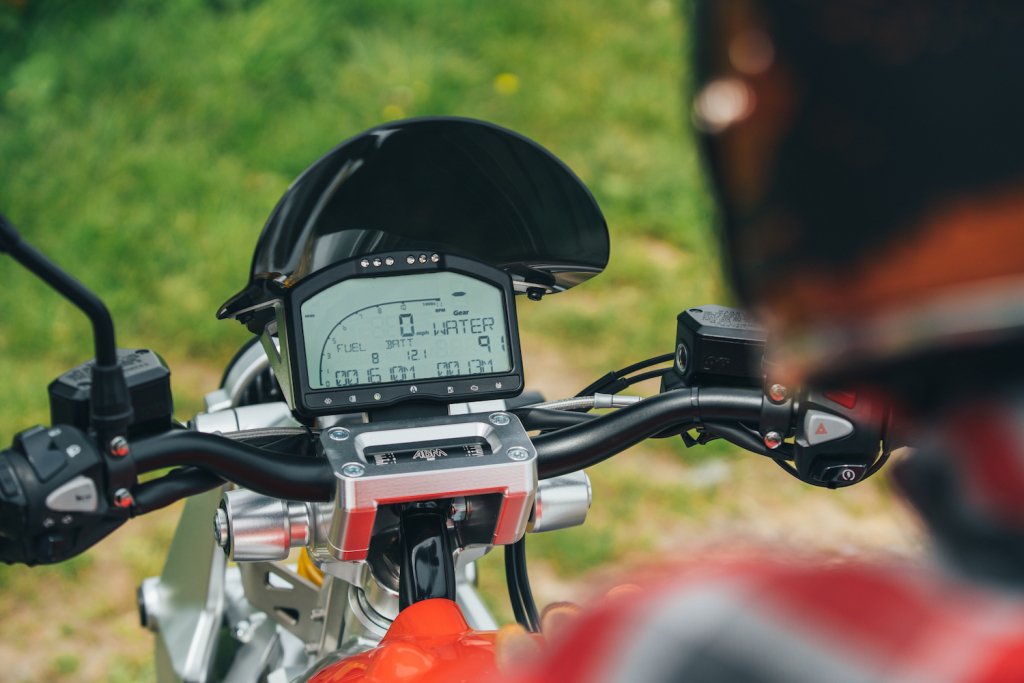 Although, Tom points us towards two indistinguishable bikes that are awaiting collection by their new owners: a pair of profligate pals that wanted matching rides for the summer season.

Admittedly, the Ace is a little intimidating at first. Its chunky frame and curvaceous tank give the appearance of a stretched riding position, where the rider almost has to lay across the tank to reach the bars.

But this isn’t the case, as cleverly placed seat and pegs ensure the bike immediately envelops its rider so it feels like a big, metallic extension of the body. There is also a little fly screen on this cruiser and the inimitable girder front fork system that harks back to some of the earliest motorcycles Ariel produced… albeit infinitely more high-tech. 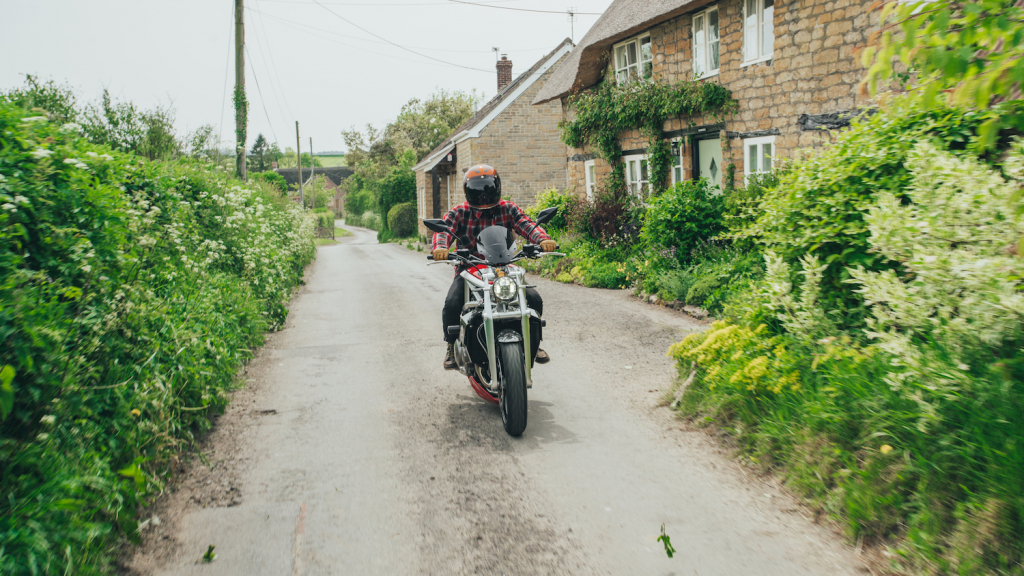 Apart from a control module located on the left-hand flank of the bike (it basically controls the clocks and traction control), everything feels extremely familiar, while the adjustable brakes and clutch make it easy to get the controls spot on.

Tom points us in the direction of some local tarmac, which the Ariel team frequently uses as a test routes so we saddle up and make a beeline for some twisting B-roads.

The first thing to hit you about the Ace is its awesome exhaust note – a guttural growl at low revs that rapidly climbs to a spine-tingling superbike shriek as the digital tacho sweeps across the LCD screen. 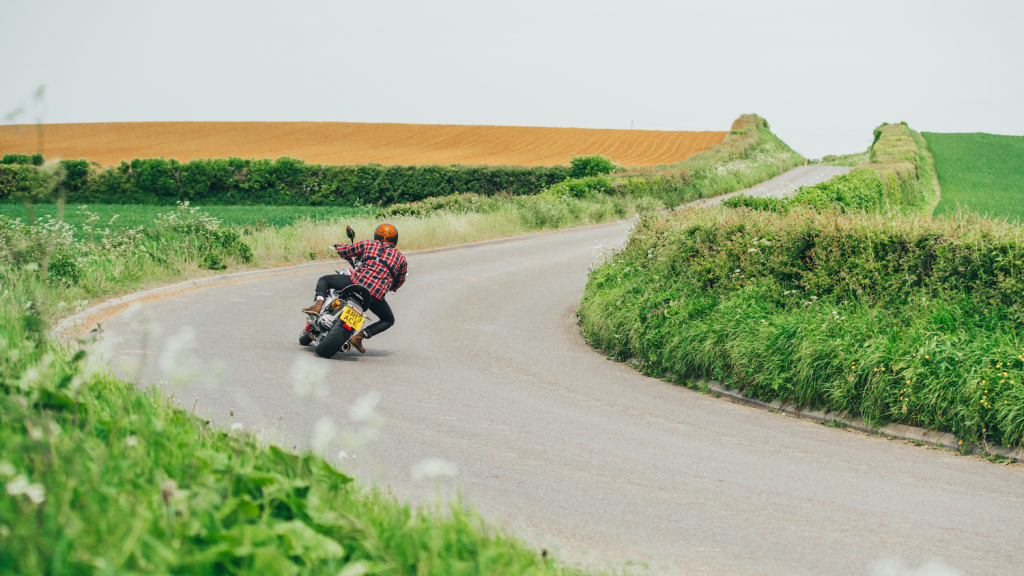 That Honda engine is good for 165mph if you have the cojones, but the acceleration is equally impressive. This particular model is fitted with a quick-shifter, which allows for gut-bustingly rapid, clutch-less clunks through the cogs. First is dispatched in milliseconds, while second, third and fourth usher in face-melting speeds. It’s highly addictive.

But most impressive of all is the Ace’s ability to transform from back-road blaster to a fairly sedate and comfortable cruiser. Granted, it might not be as eager to turn in as a modern, athletic sports bike, but anyone mildly handy on two wheels will be able to bleed maximum performance from this thing.

And boy, does it turn heads. Even when cruising Ariel’s stomping ground, the Ace didn’t fail to have passers-by gawping and fellow petrolheads probing for information when parked up. 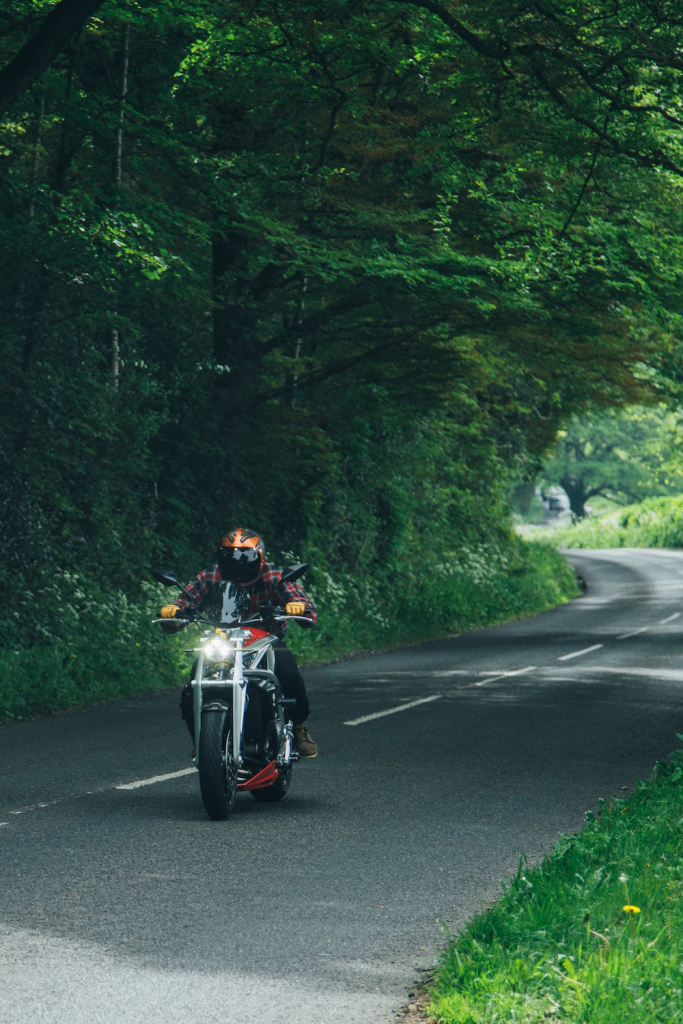 Is it worth the £20,000 price tag? That’s surely down to the individual to decide. But this feels like a hell of lot of bespoke bike for the money and one that rides and handles like the best offerings from the biggest names in motorcycle manufacturing.

An impressive feat from such a small outfit. We raise our teacups to salute you.