We are pretty sure we once spotted Kevington Hall on an episode of The Antiques Roadshow. It’s the sort of Grade I listed building that boasts the rolling lawnscapes and spotless topiary that mark the perfect backdrop to a spot of collectible-fondling.

It is not the sort of place you expect to see over 500 noisy motorcycles gradually turning these immaculate gardens into a muddy quagmire, as they raucously race over a weekend of thrills, spills and two-wheeled carnage. Welcome to the Malle Mile. The greatest motorcycling event on the planet.

Now in its fifth year, this annual biker get-together is the brainchild of British designers Robert Nightingale and Jonny Cazzola, co-founders of Malle London – you know, the purveyors of exquisite motorcycle luggage and clothing, as well as the masterminds behind the very photogenic Great Mile rally. 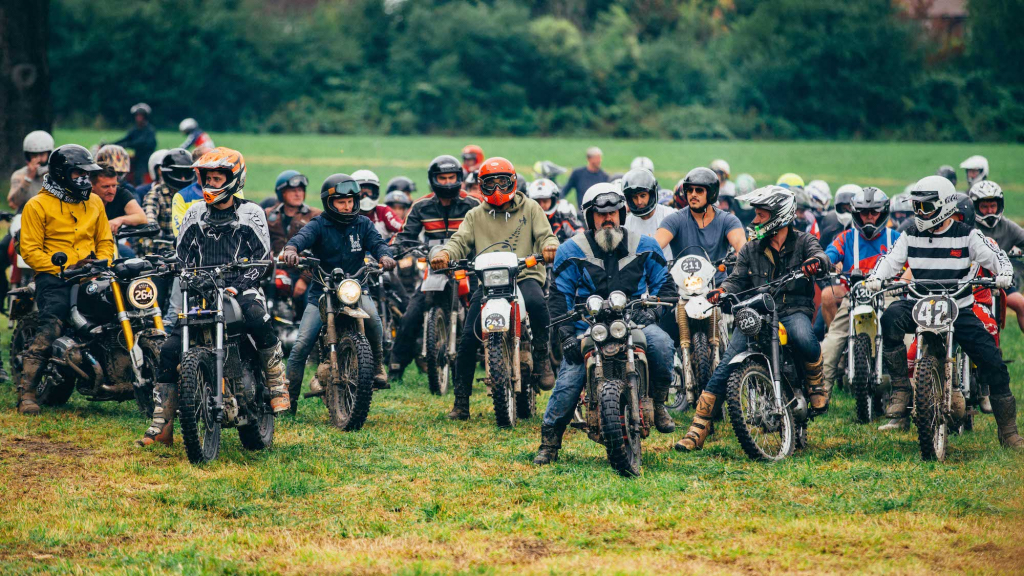 The pair’s clothing might be functional and sensible, but its now infamous annual Malle Mile is very much an excuse to let the hair down and let rip across several challenging races on whatever wheels you can muster.

With thousands attending this year’s event and hundreds competing in several classes with a refreshingly relaxed “run what you brung” format, it is little wonder some have labelled the event ‘the most inappropriate garden party in the world’.

The tale of the cursed Honda

Anyone who reads the pages of Flat-Out will likely recognise the story of the Honda CB175 that would be tasked with battling the 500-plus other motorcycles over a weekend of slippery carnage. The bike has caused me so many headaches over the years and it decided to, for want of a better phrase, shit its pants just a couple of weeks before we were due to load up and roll out. 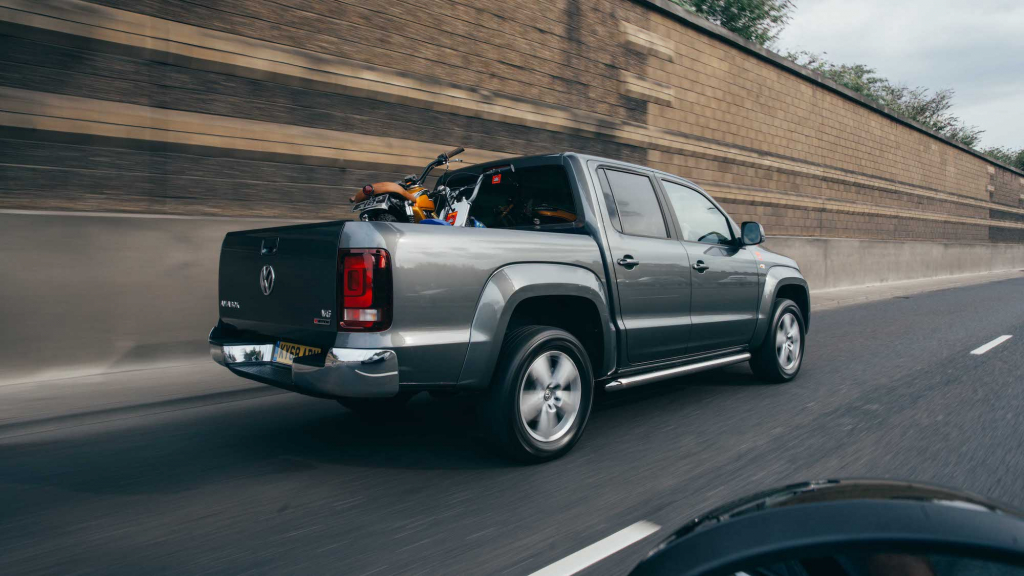 Image by: will van Wingerden/Comex Visuals

With almost every favour from mechanically-minded mates used up, we turned to our chum Pete from Side Rock Cycles, who roped in local hero Bob Presslee from Woolbridge Motorcycles to help us out. Bob and Pete were also racing this year, so understood the desperation in my voice when I showed up with a busted bike and a small tear in my eye.

Bob worked his magic and after a full engine rebore, new barrels and God knows what else pumped into it, the 1973 Honda CB175 would race. As a result, a pang of pride struck as me and the rest of the Flat-Out crew loaded the little orange nightmare onto the back of our trusty VW Amarok, alongside what seemed like over a tonne of camping gear, tools, spare batteries and other vital equipment required to keep the ageing Japanese bike alive.

“Racing is furious and the standing start hilarious, like a bunch of middle-aged men running for the bus”

Kevington Hall Hall is handily situated in Orpington, jut outside of London, so makes for a very simple drive for many. Most city dwellers pack light and simply ride over on their chosen steeds, but for those living further afield, it is a long drive to the Malle Mile. 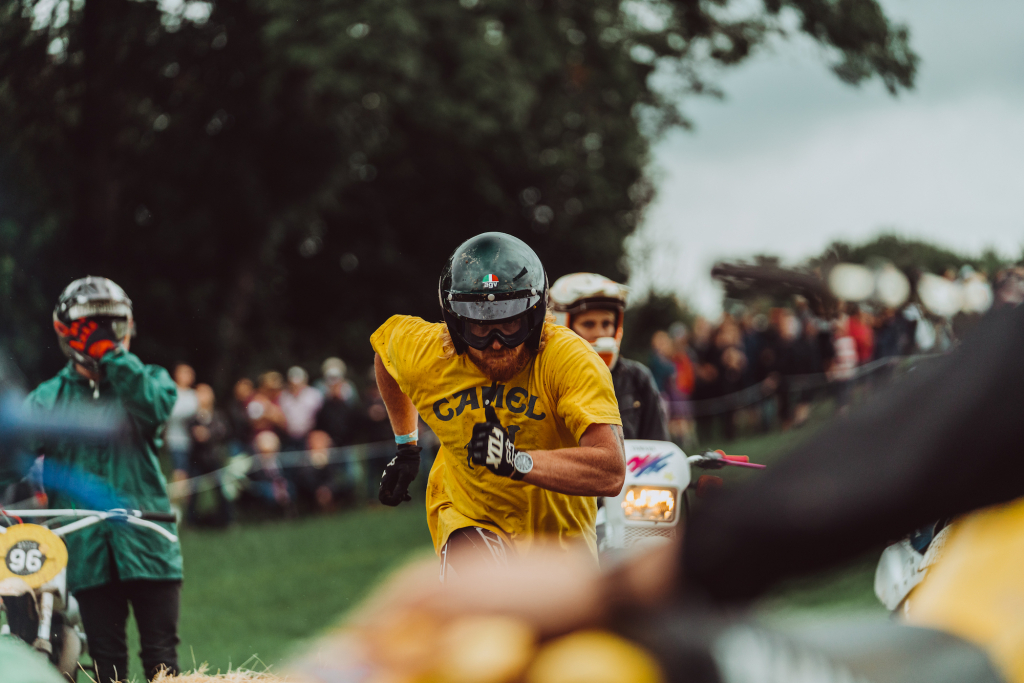 We arrive and rapidly set up camp with hundreds of other like-minded individuals. Classic American pick-up trucks share pitches with battered Transit vans and all those in attendance wheel their eclectic mix of motorcycles out for everyone to have a good look at.

The array of machinery in the makeshift parc fermé is staggering, with everything from highly modified modern street bikes to old speedway machines and the occasional Harley-Davidson chopper showing face. Basically, if it has two wheels and it’s interesting, it’s here.

“The Malle Mile is so perfectly eccentric and brilliantly British”

Malle’s Robert and Jonny oversee the entire event. Dressed in their branded white overalls, they can be found running all over the site, checking in on everyone and making sure spirits remain high. 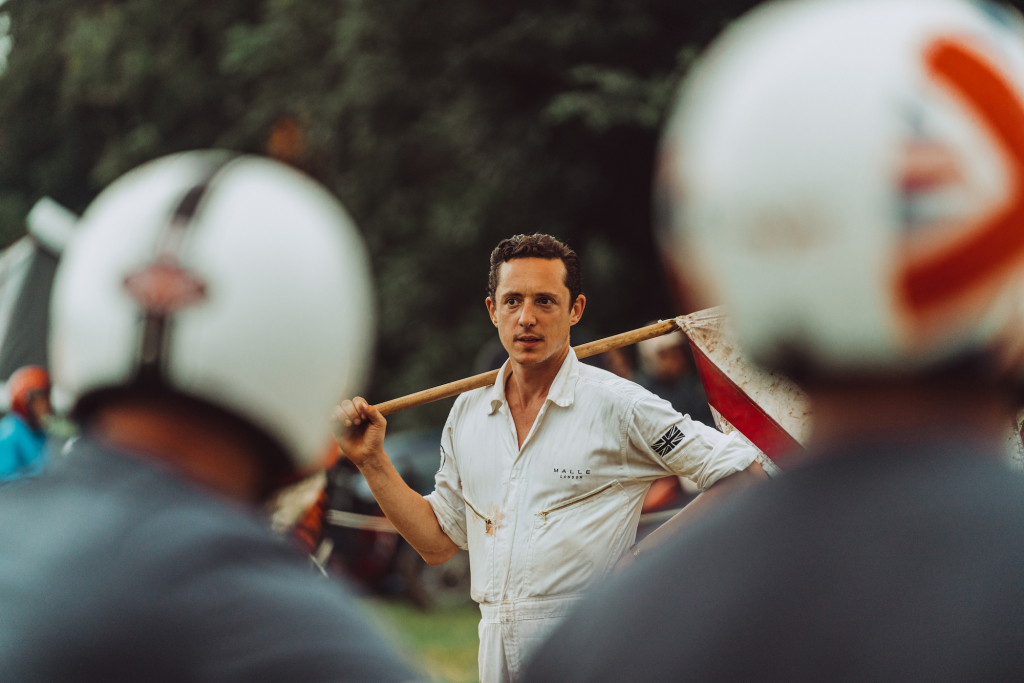 Work on my little Honda goes on until the night. With head torches donned, a small crack team of friendly mechanics chums set about rectifying a rectifier issue – the battery isn’t charging very well and it’s running like a dog. Naturally, passers-by offer to muck in, only accepting a chilled beer from the cool box as payment.

Festivalgoers in their little camps chat bikes, adventures and swap tales of breakdowns, while those with more reliable wheels head to the large outdoor bar, with the banter and relentless mickey taking getting more furious as the night passes. It’s all so refreshingly un-serious and laid back, despite the threat of thunderstorms and rain.

We are all awoken early by the sound of torrential precipitation beating down on the flimsy plastic of tent flysheets. The ground is absolutely sodden and the clouds refuse to let up throughout most of Saturday. 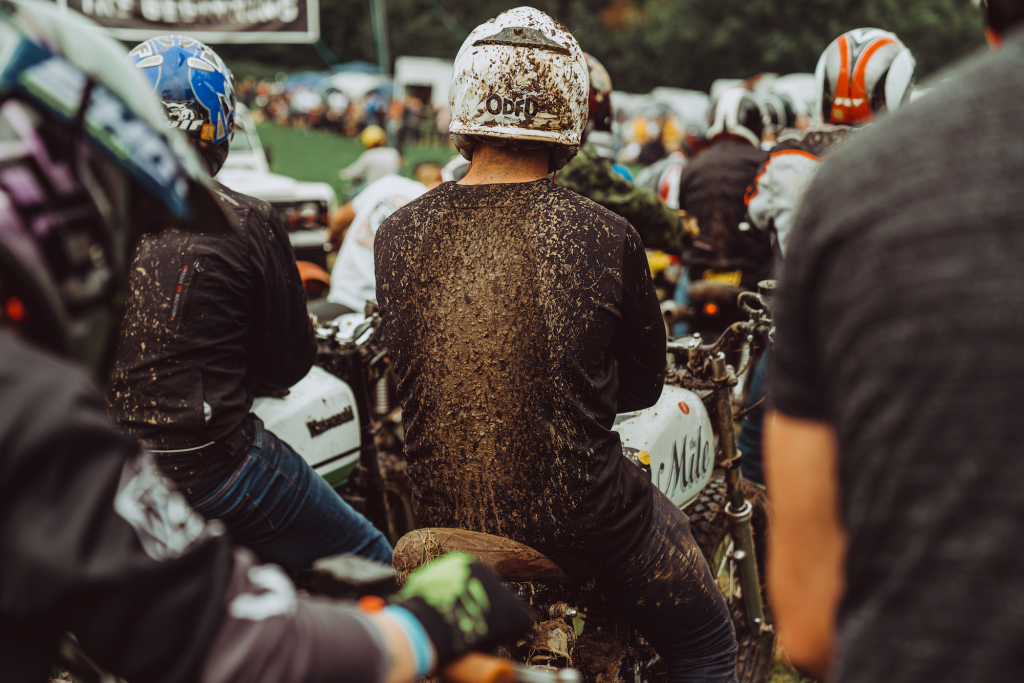 But as the tastefully designed Malle invite says, ‘if it rains, we make mud’ and mud is exactly what is made. The first real race of the weekend is an all-out sprint and comprises of a 1/8-mile grass track that sees two machines go head-to-head in a simple knockout format.

The novice class is up first and racers must adopt a “1950s rules” start: left hand on the helmet, kicking down into first gear and dumping the clutch only when the start flag is waved. Of course, many fumble that routine and the hilarity of a false start doesn’t escape the spectators.

Modern motocross bikes face-off against vintage scramblers, while the seasoned rider often succumbs to a complete novice. It’s a lottery and all the more entertaining for it. But it doesn’t take long for the grassy course to transform, into a quagmire. By the time the lightweights, scramblers and custom bikes have a go, the track looks like the Somme. 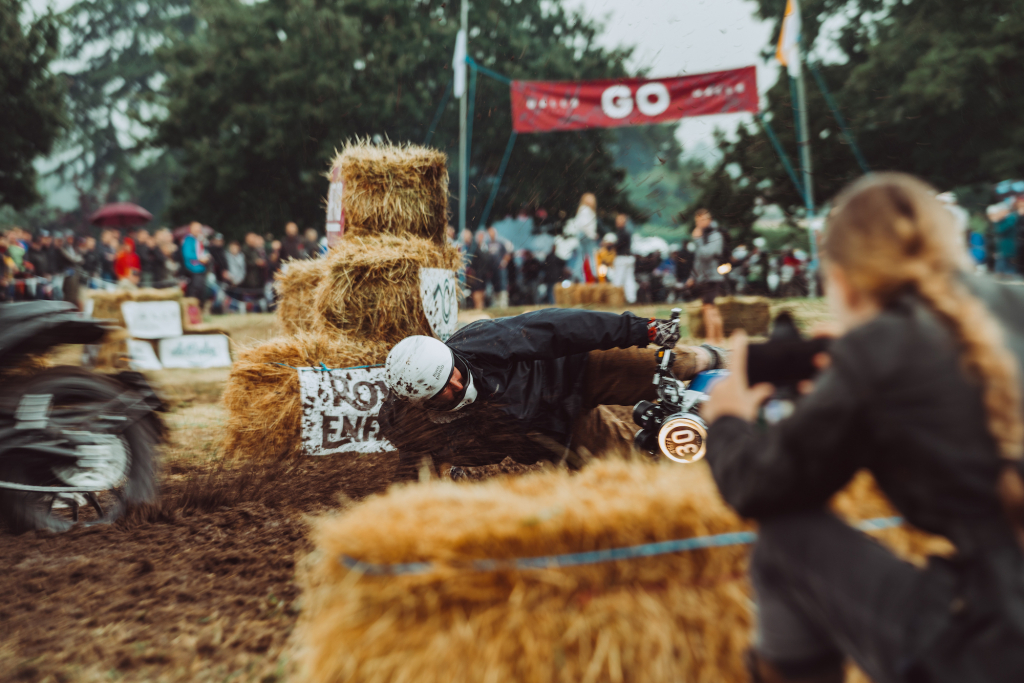 But this doesn’t stop the fun and the grins plastered across muddy faces can be seen from space. Even the spectators have consigned themselves to a weekend of soaked skin and the cheers grow louder with every crash, tumble and breakdown. There are absolutely no prizes at stake here, meaning every race is approached with a pat-on-the-back spirit and it doesn’t matter the skill of the rider or the state of the machine.

Two comperes sat in the rear of a heavily modified Land Rover commentate throughout the day and not a single rider escapes a good old-fashioned ribbing over the loud speakers. One rider is dubbed “Yoga Pants” due to his very fitting blue motocross trousers, while another is a victim of at least ten minutes of jokes and jibes due to his selection of a tank top, which the commentators claim show off his muscular arms. The crowd is in stitches.

The day continues with a 1/8-mile slalom hill climb, Moto Polo (it does exactly what it says on the tin) and the Malle 100 – by far my favourite race of the day and scene of several hilarious tumbles, shameless showboating and some very skilled riding. The format features a one-mile dirt track circuit race with a Le Mans-style running start. Ten riders face off over ten heats and the winners from each heat meet in the final. 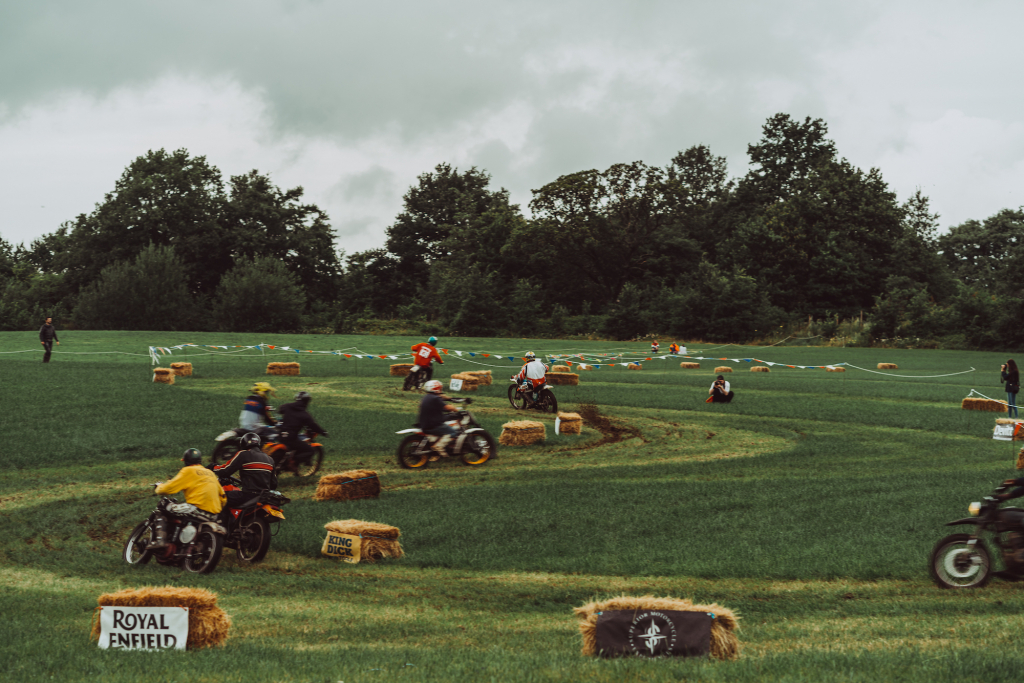 Racing is furious and the standing start hilarious, like “a bunch of middle-aged men running for the bus”, according to our commentators. The little Honda I’m riding has bravely soldiered on with several mechanical gremlins all day – beaten in the sprint by a lady on a cafe racer and thrashed in the later stages of the hillclimb by a lady on an original Triumph Tiger – but it decides to perform like a champion during this race.

“The array of machinery in the makeshift parc fermé is staggering”

I cross the finish line in fourth, after avoiding two crashes but not the inevitable thrashing from three powerful dirt bikes with more committed riders behind the bars.

Gear up for good times

After an acrobatic flying display by a guy who built his own plane (how incredibly fitting), the racing continues well into the Saturday night, with electric motorcycles invited to silently dash up the Malle Mile hill climb route, which has been lined with blue lights to add to the ambience. 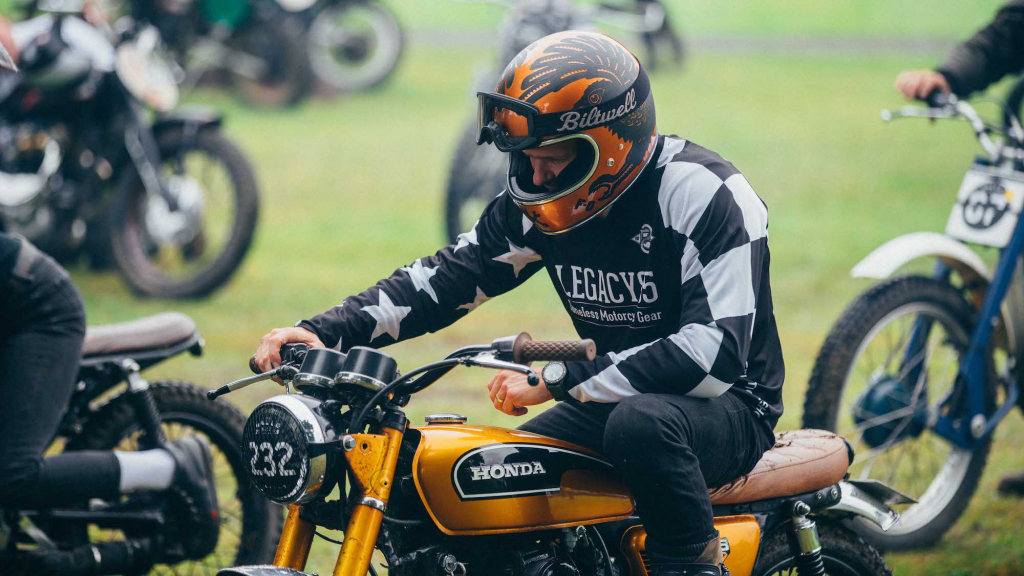 Music blares from one of the festival tents, which has been hosting talks by famous motorcycle adventurers all day, while most congregate in the bar area to debrief and enjoy a well-earned beer and a burger or burrito from one of the food trucks. There’s also a cinema area for those that would rather chill out with a hot chocolate, stalls hawking clothing or artwork and a nightclub set in the basement of Kevington Hall Hall for those carousers living under the mantra of “I’m here for a good time, not a long time”.

Sore heads and another night of intermittent rainfall doesn’t halt proceedings on the final Sunday, with everyone gathering at the foot of the hill climb for yet more mayhem. There are very few places in the world where you can nonchalantly race fellow enthusiasts in such a carefree arena and all attendees are making the most of it.

Jonny and Robert continue to oversee all of the activities and the comedic comperes carry on with their unwavering repartee, accepting bribes of black coffee for an elusive red sticker, which are only handed to winning machines and grant entry into a grand finale derby that crowns an overall winning legend. 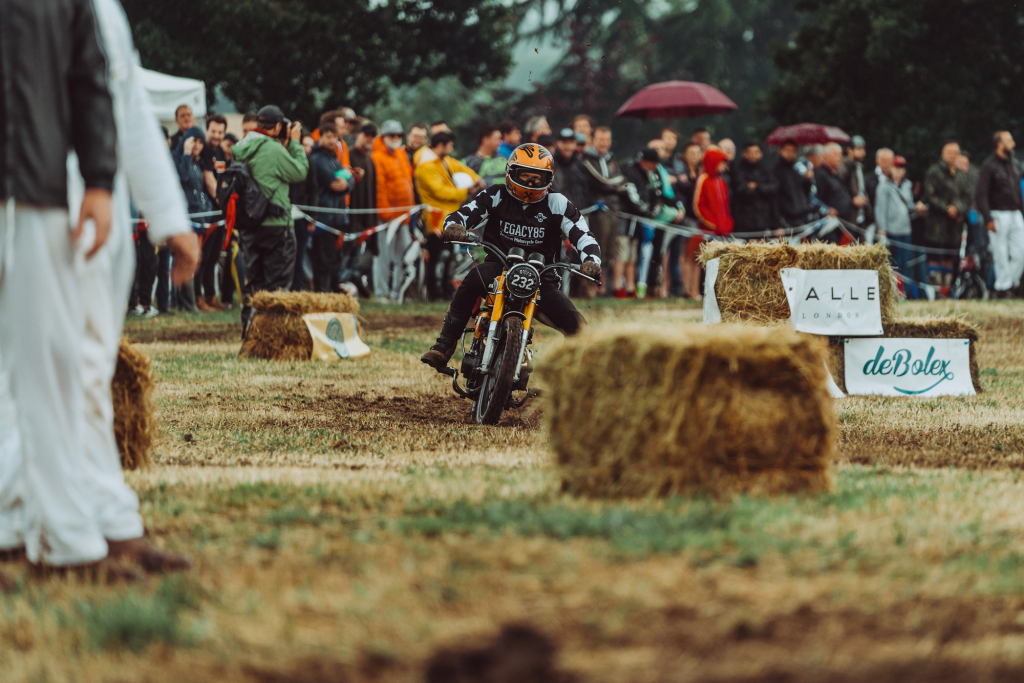 The creaky little Honda finally achieves red sticker status on its very last hill climb and it rapidly becomes one of my prized possessions, despite that dodgy rectifier returning, a pretty serious fuel hose leak and a long list of other mechanical gremlins that refuse to abate.

But in today’s atmosphere of crushing health and safety regulations and marketing twaddle, the Malle Mile is so perfectly eccentric and brilliantly British. It doesn’t matter if your granddad’s bike is an old beater, or if you can’t ride for toffee. So long as you can weather the storm with a smile, you’re part of the Malle gang.

We’ve got a full video coming soon and if you spot yourself in the pictures, feel free to get in touch either via our Instagram page or email hello@flatoutmag.co.uk

Inside Malle London’s The Great Mile 2018: Part One

Inside Malle London's The Great Mile 2018: Part One