Unless you’ve had your head buried in a dustbin for the past six months, you will have probably noticed that there has been a crazy buzz surrounding this new, fourth generation Suzuki Jimny.

The automotive world has been falling head over heels in love with its shrunken G-Wagon styling, the cute Kei Car dimensions and its ability to tackle even the most arduous off-road courses without breaking a sweat.

Perhaps part of the excitement stems from the fact that this is a car, in pure contradiction to the general trend for constant facelifts and model refreshment, which has remained largely untouched for a staggering 20 years. 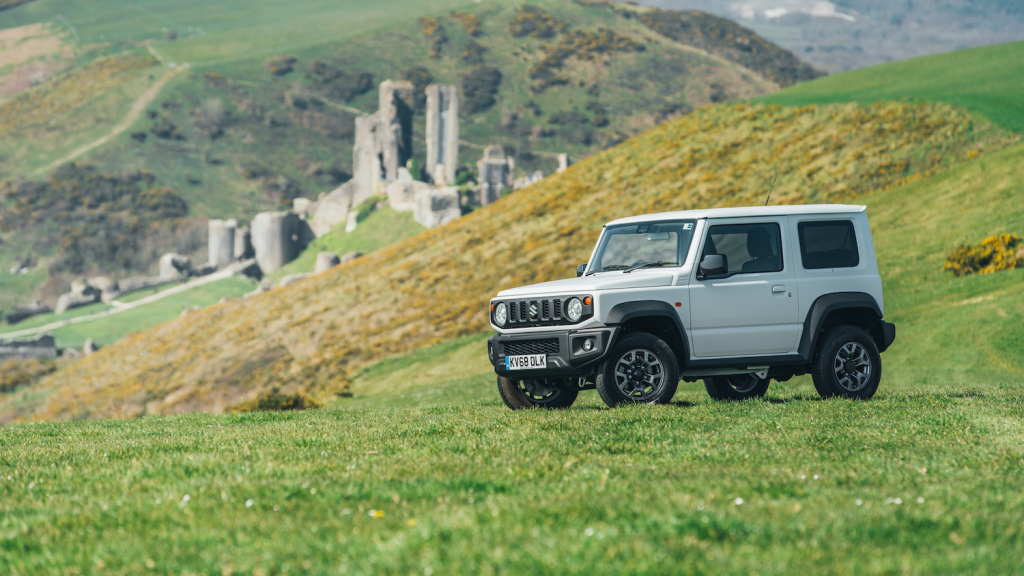 I have to admit, I was pretty pumped when the little white workhorse appeared on my street, as earlier this year, a previous generation rental Jimny came to the rescue in St. Lucia, when a Land Rover Defender decided to devour its own clutch.

The way in which the tiny off-road machine managed to continue exploring the dense jungle of this Caribbean gem, albeit with a fraction of the stowage space, positively blew my mind.

So, rather than simply put this new model through the normal tests (quick blast on the motorway, trip to the shops, occasional school run shenanigans), I decided to hit the local green laning forums and hunt out some natural habitat for this Jimny to roam. 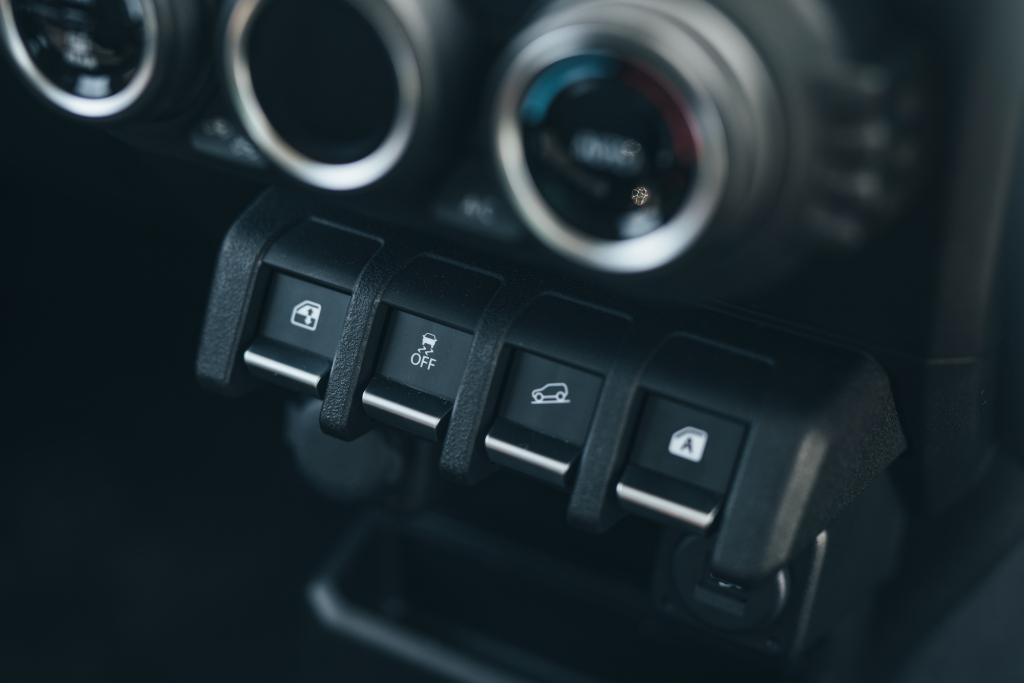 Let’s get this out of the way first: if there is anyone out there considering diverting the £18,999 asking price for the fully-loaded SZ5 Jimny away from a more sensible family SUV, such has Nissan Juke, Kia Stonic or even the Dacia Duster, they need their head examined.

Sure, full style points will be awarded for the commitment to looking cool, but new Jimny is just as uncomfortable on the road as it has always ever been. That’s because underneath the cute exterior bodywork remains some very basic chassis and suspension technology, a wheezy 100bhp 1.5-litre engine and vague steering that makes piloting new Jimny on the motorway somewhat of a challenge.

Cruise at 70mph and you can expect the rev needle to sit at a deafening 3-4,000rpm, while the mere hint of a crosswind has the tall, often roly-poly silhouette swaying like a tree in the breeze. 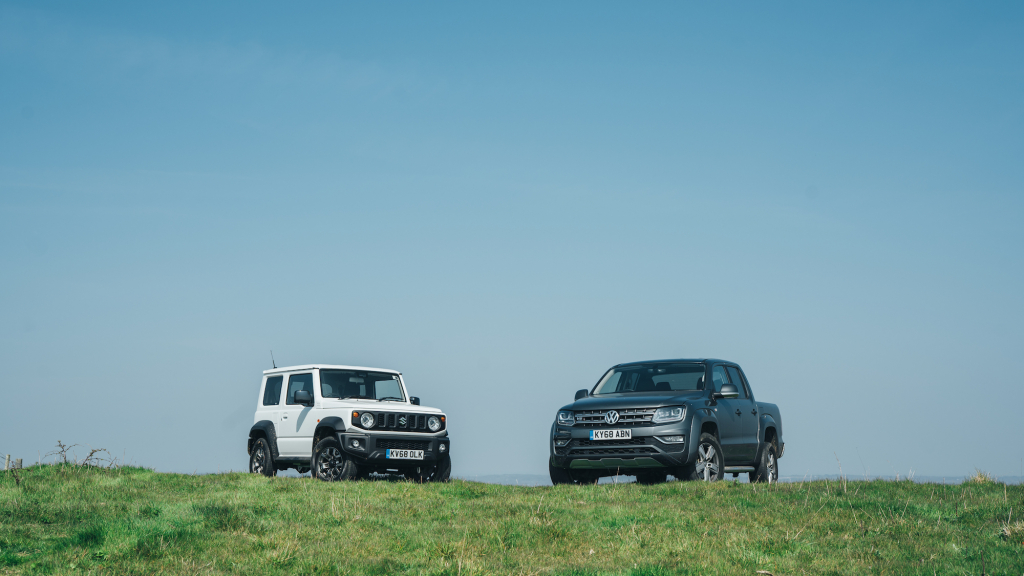 The long throw five-speed gearbox requires a degree of accuracy and an infinite amount of patience from front passengers, as hands will bump knees on numerous occasions, while the steering is so vague, you may as well shove a croissant on the steering column.

There’s not a great deal of visibility out of the windows and the square body shape makes placing the diddy thing quite tricky. A set of parking sensors or a reversing camera would no doubt help things.

As much as I wanted to love the Jimny, I found the first few days with it proved a bit of a chore. There’s no boot to speak of (a mere 85 litres with the rear seats in place) and the ride proved bum-numbingly painful on a few of the longer journeys, but this is all missing the point somewhat. 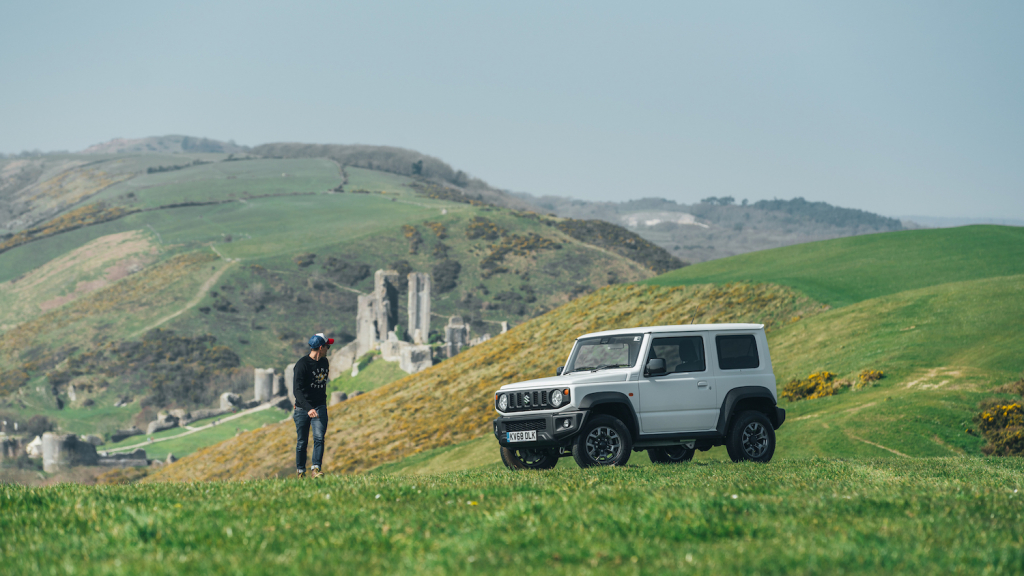 Point the tiny tearaway towards a rutted farm track and it really comes into its own.

Live for the lanes

The fact of the matter is, all models are fitted with ALLGRIP Pro all-wheel-drive, while this higher spec SZ4 version also comes equipped with a fairly rudimentary downhill assist function and that super cool separate low-range gearbox.

A quick glance around the sparse interior reveals it means business. There’s a hose-down quality to the plastic trimmings, the buttons and dials are about as rugged as they come and even the hex bolts that hold the plastic fasciae in place are gloriously exposed. 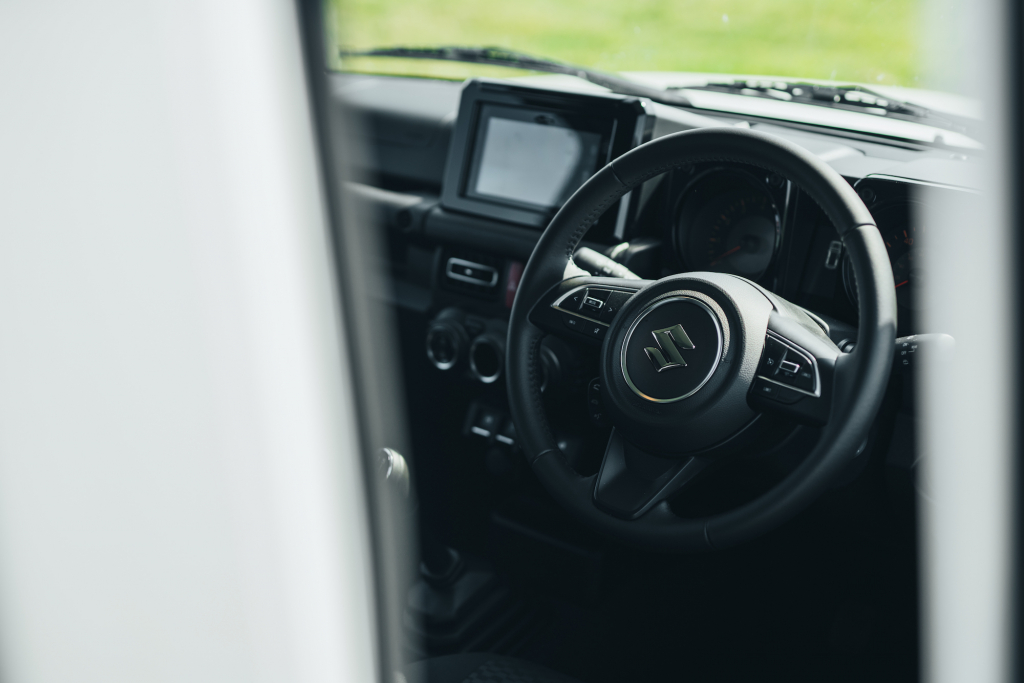 It looks like a Tonka Toy both inside and out, and even this SZ5’s infotainment screen feels like it has been bolted on with bits of spare Meccano. There’s nothing else for it than to ask a few local off-roading experts for some tips and head for the hills.

A short drive, a ferry and a few pissed off farmers later and I arrive at the foot of a steep climb somewhere deep in the Dorset countryside. The beginning of this trail is only recognisable by a small sign that warns users to avoid if wet or face a hefty fine.

Thankfully, it has been dry for days and the dusty little track is perfect for a spot of off-roading. With the Jimny’s gearbox knocked into 4H, it briefly hunts for grip before scrabbling across the surface like a scampering terrier. 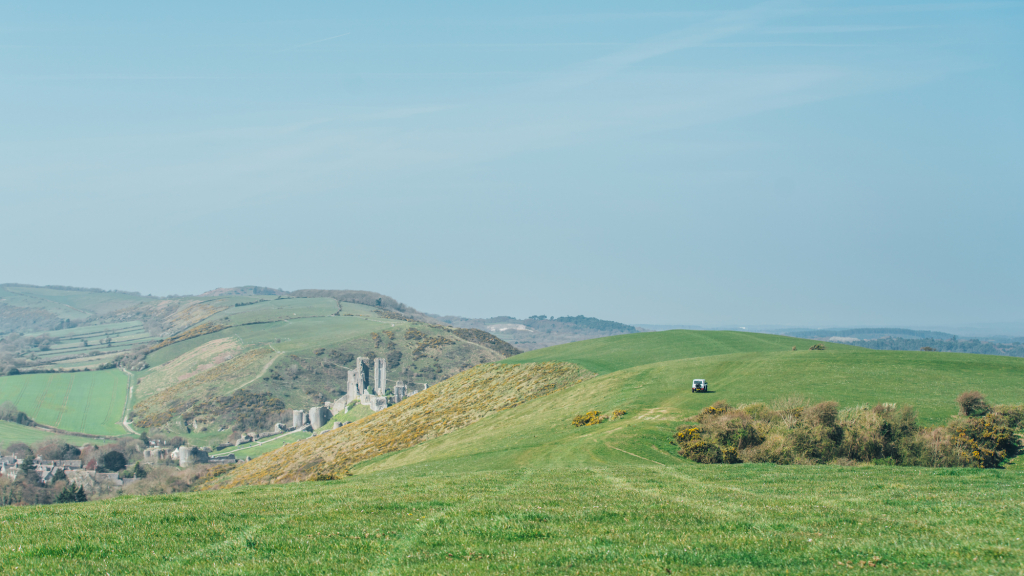 The Jimny’s off-road stats are mightily impressive. An approach angle of 37 degrees, breakover of 28 degrees and departure angle of 49 degrees are up there with those flaunted by Jeep et al.

Perhaps the one observation while crawling across some particularly rutted farm tracks (bloody tractors) is the lack of ground clearance. The little 15-inch alloy wheels only offer some 210mm of breathing space between the underbody and some nasty looking rocks, so it pays to be vigilant.

But Suzuki’s decision to stick with the diddy proportions is an excellent one, as new Jimny retains the ability to thread through small gaps and skip over obstacles with ease. In fact, should you find the wheels get bogged down, it’s possible to ‘bounce’ the 1,135kg frame out of a rut with the help of a couple of mates. 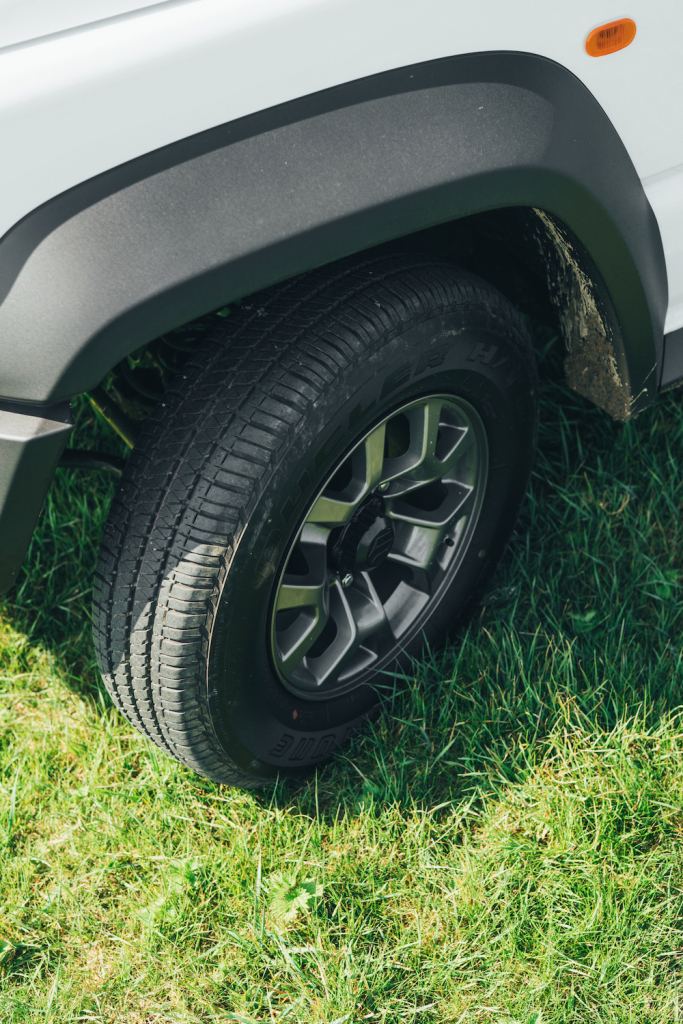 A couple of wrong turns and a few more shouty farmers later and it is time to call time on the off-roading, which means swapping the entertainingly rough surfaces and steep climbs for the monotonous drone of dual carriageways.

Never before has a vehicle left me torn in such a way. There’s no denying Jimny is an achingly cool thing to cruise around in but it’s difficult to recommend if real money is going to change hands.

In short, there are 4x4s that juggle the whole on-road/off-road thing with greater skill (the Toyota Land Cruiser is just one example) but very few come with the tempting price tag and cheeky looks of Suzuki’s baby off-roader. 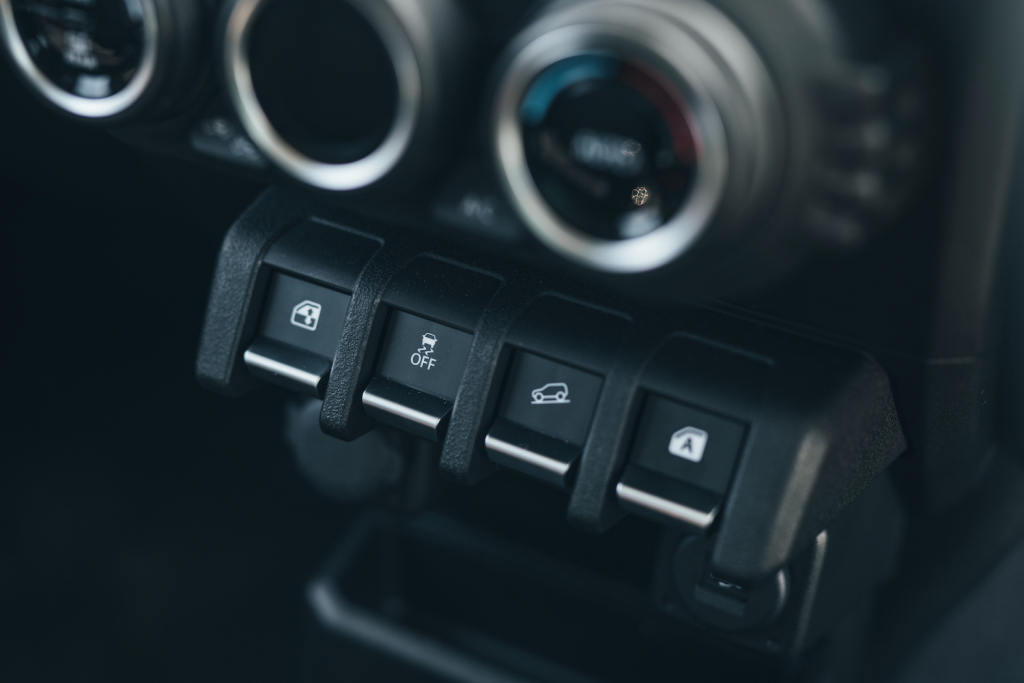 Jimny sits in a league of its own and boasts more charm and character than pretty much anything on sale today. Hats off to you if you’re going to buy one, just make sure you take the most direct route to your destination. Crossing a farmer’s field would be more desirable than sitting on the motorway.

Now watch the short film about our time with the mighty Jimny. Filmed by the guys at Comex Visuals.

The ultimate Chelsea tractor from the Chelsea Truck Company?