Forest, tunnel, lake, mountain. Forest, bridge, fjords, more mountains. Another tunnel. Traversing the 360km route that runs from Bergen airport in Norway to the isolated cluster of houses and farms that is Hoddevik in the north west of the Scandinavian country is akin to being stuck in a cheap cartoon – one where the animators have saved time and money by repeating the same backgrounds over and over again.

If it weren’t for the sat-nav in the car slowly counting down the kilometres as we race through the picturesque, if a little repetitive scenery, I’d begin to question my sanity and navigational skills.

There is a purpose to the mind and bum-numbingly beautiful hack through the Nordic scenery and that is the promise of breath-taking vistas, friendly locals and the opportunity to surf empty, if decidedly chilly, waves. 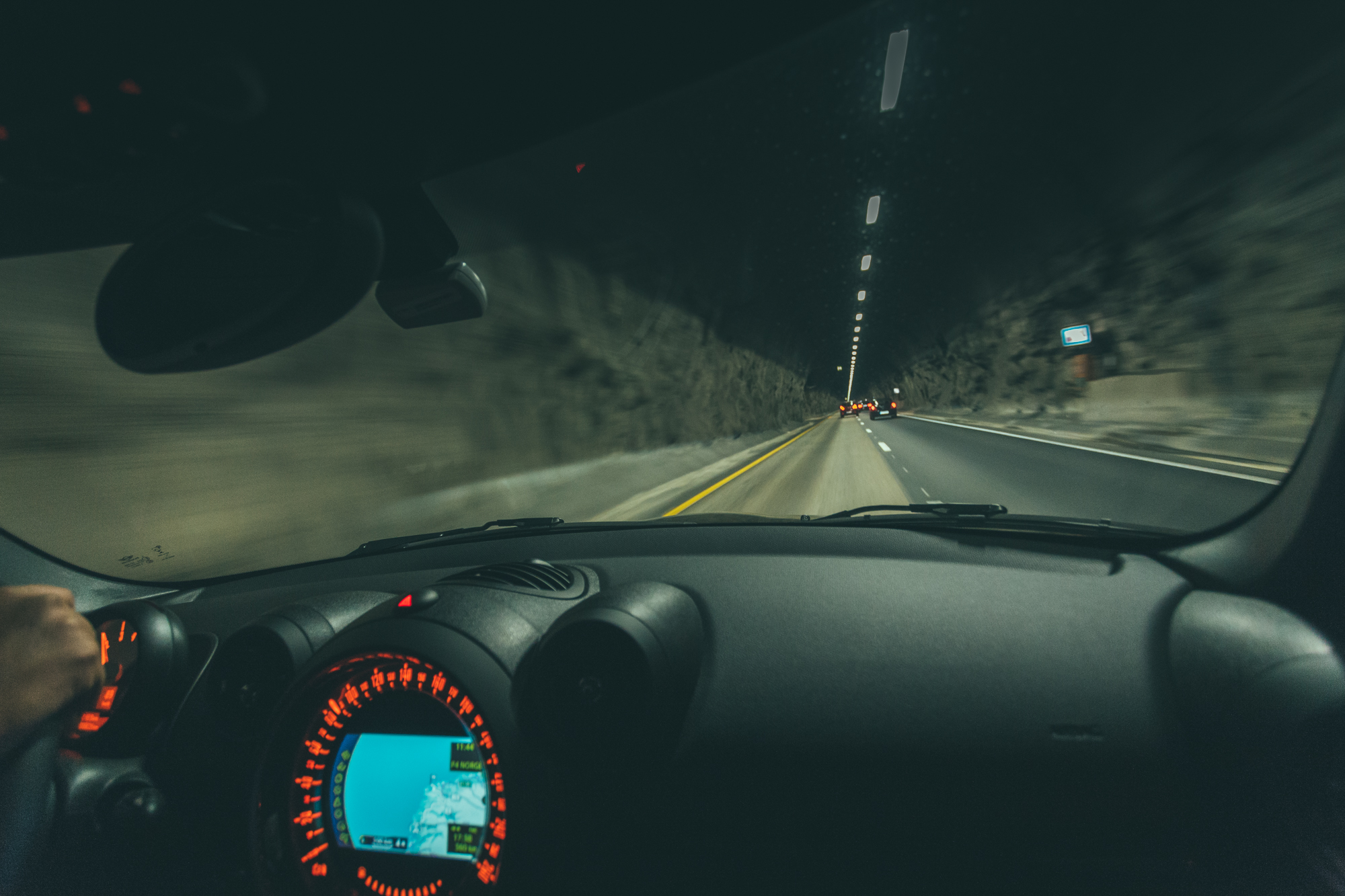 That’s right. Norway has waves and the summer has lacked lumpy seas back in Blighty, so we are desperate to slide down a few salty ones, even if it does mean donning the thickest wetsuit money can buy and spending a fortune on fuel. We don’t need an excuse for a good road trip.

Luckily, Mini is on a mission to prove that its vehicles have plenty of ‘lifestyle potential’, so have asked us to hop in its Mini Countryman Cooper S, complete with a punchy 190hp, 1.6-litre turbocharged petrol engine and chunky off-road bodywork, to complete the mission.

The vehicle itself might not be the most luxurious, but it’s well suited to long motorway schleps, has the capacity to carry many surfboards upon its roof and it’s lithe enough to offer a few cheap thrills when the roads start to get interesting.

The trip begins, like many, at Heathrow airport, where a British Airways plane bound for Bergen awaits. At around £250 for a return ticket, it’s an expensive option but it’s quick, comfortable and BA are by far the best airline when it comes to not ripping off customers who want to pack their own boards.

We arrive in the miniscule airport just under two hours later, where the boards are loaded onto the roof rack of our steed and gear is shoved in the boot. Taking a moment to marvel at the amount of stuff we’ve crammed into (and onto) such a small car, we then punch the tiny town of Hoddevik into the sat-nav.

It takes a few moments for the on-board computer to calculate the journey before flashing up the route: 364km, a toll road, two ferries and an estimated arrival time of 8pm. It’s just gone 11am… that’s a lot of time in the car. 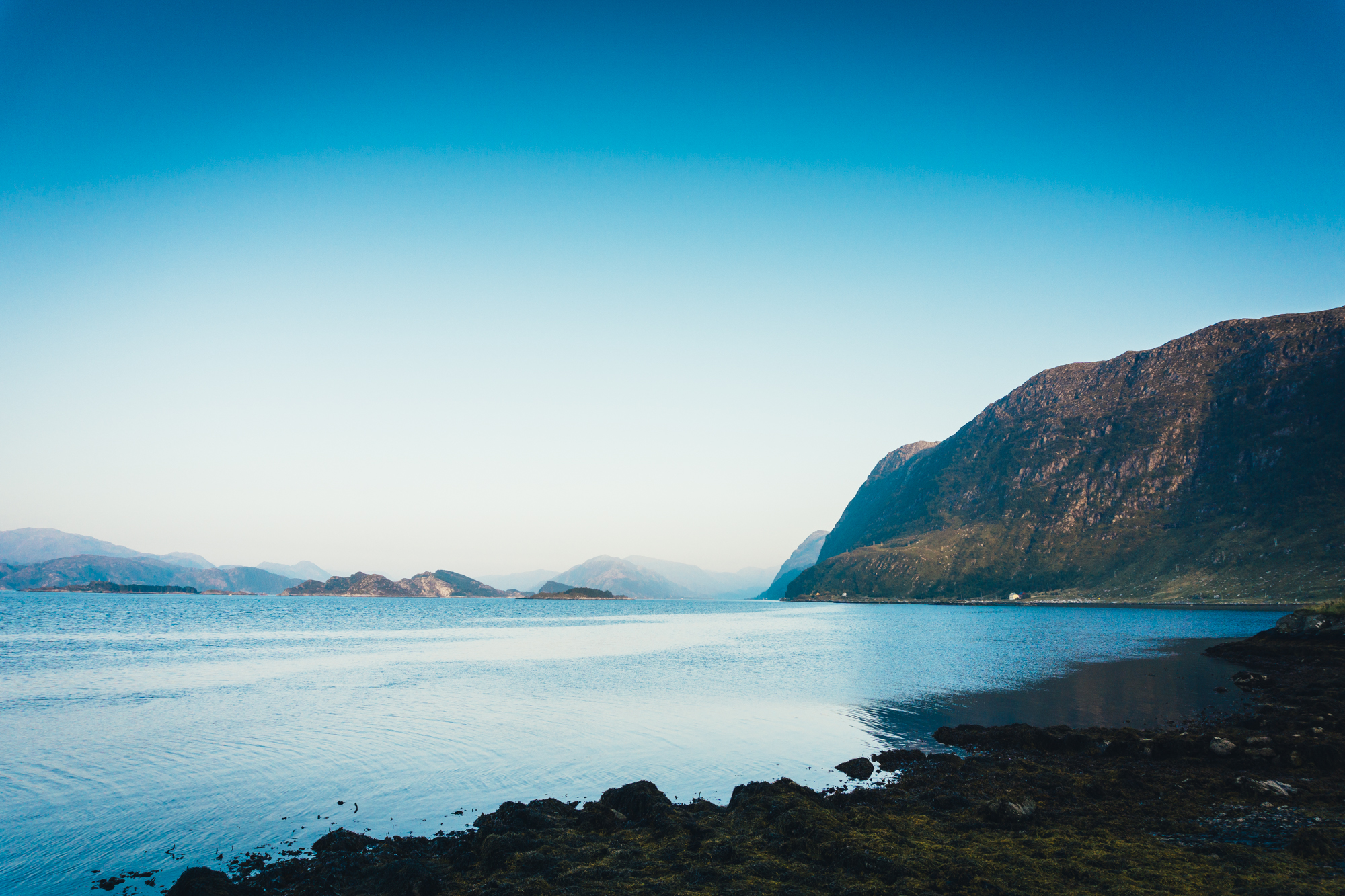 We actually arrive in Hoddevik closer to 11pm. A combination of seemingly endless amounts of stunning scenery, which prompted a number of photo opportunity stops, and poor planning – we completely mistimed both ferries – ensured the journey took the best part of a day.

But it was a day well spent. Not much on this earth compares to the sheer drama Norway has to offer with regards to scenery. Perfectly smooth roads carve their way through deep, craggy valleys, enormous bridges span crystalline fjords, and mirror-like lakes appear around most corners.

“If the surf is as empty as these roads, we’re in for a treat,” Lewis, fellow surfer and talented photographer, mused from the passenger seat.

Thoughts of completely barren seas would have to be parked for the night, as our extremely late arrival meant we only had time to hastily check into the LaPoint Surf Camp, one of just two hostels in Hoddevik offering a reasonably priced dorm room for the duration of our stay. Both choices cater for surfers and adventurers willing to temporarily park luxury in order to appreciate the wilderness.

The landscape in these parts is truly mesmerising. Photo: Lewis Harrison-Pinder 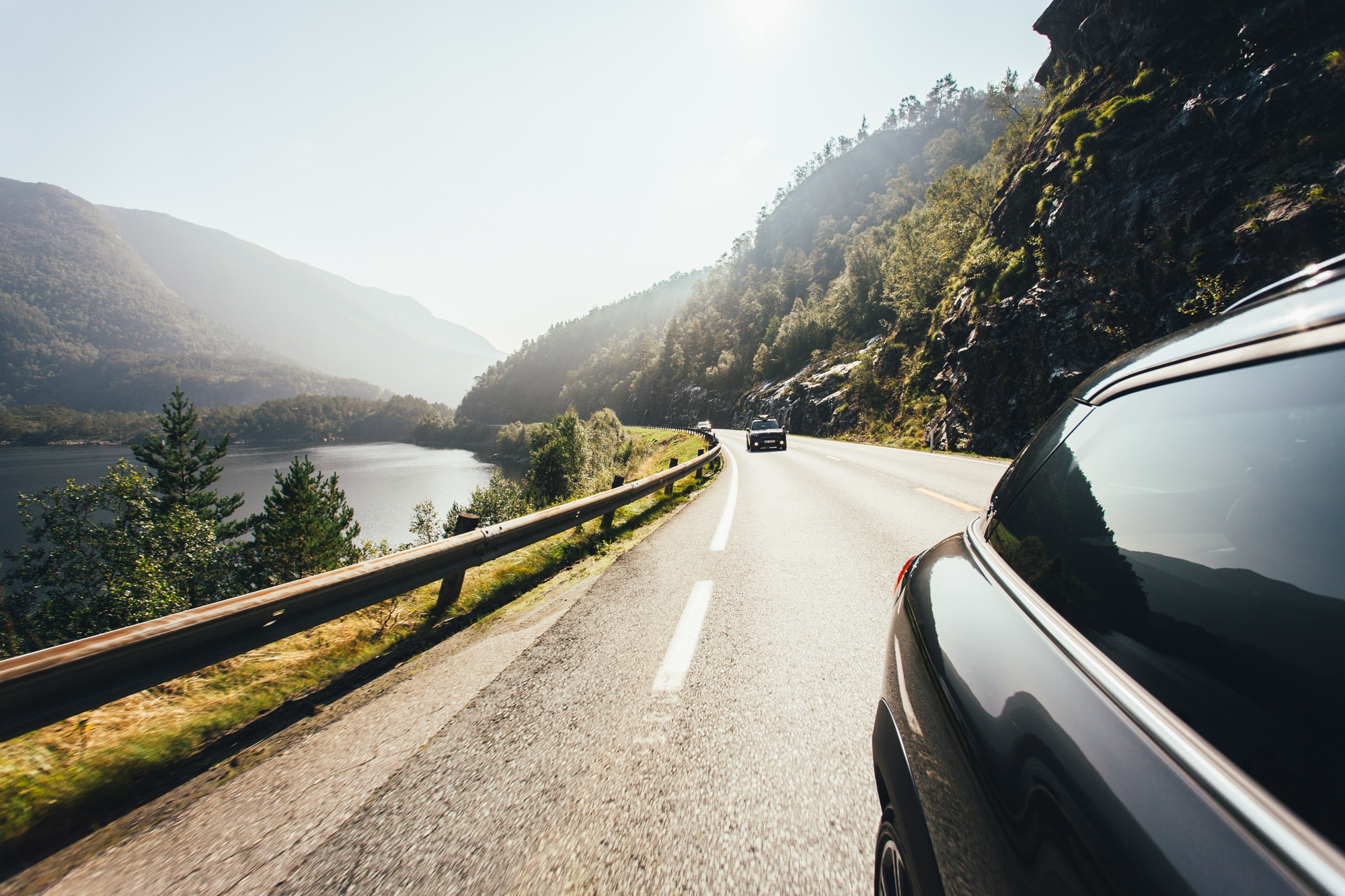 Lakes and Fjords. Get used to them. Photo: Lewis Harrison-Pinder 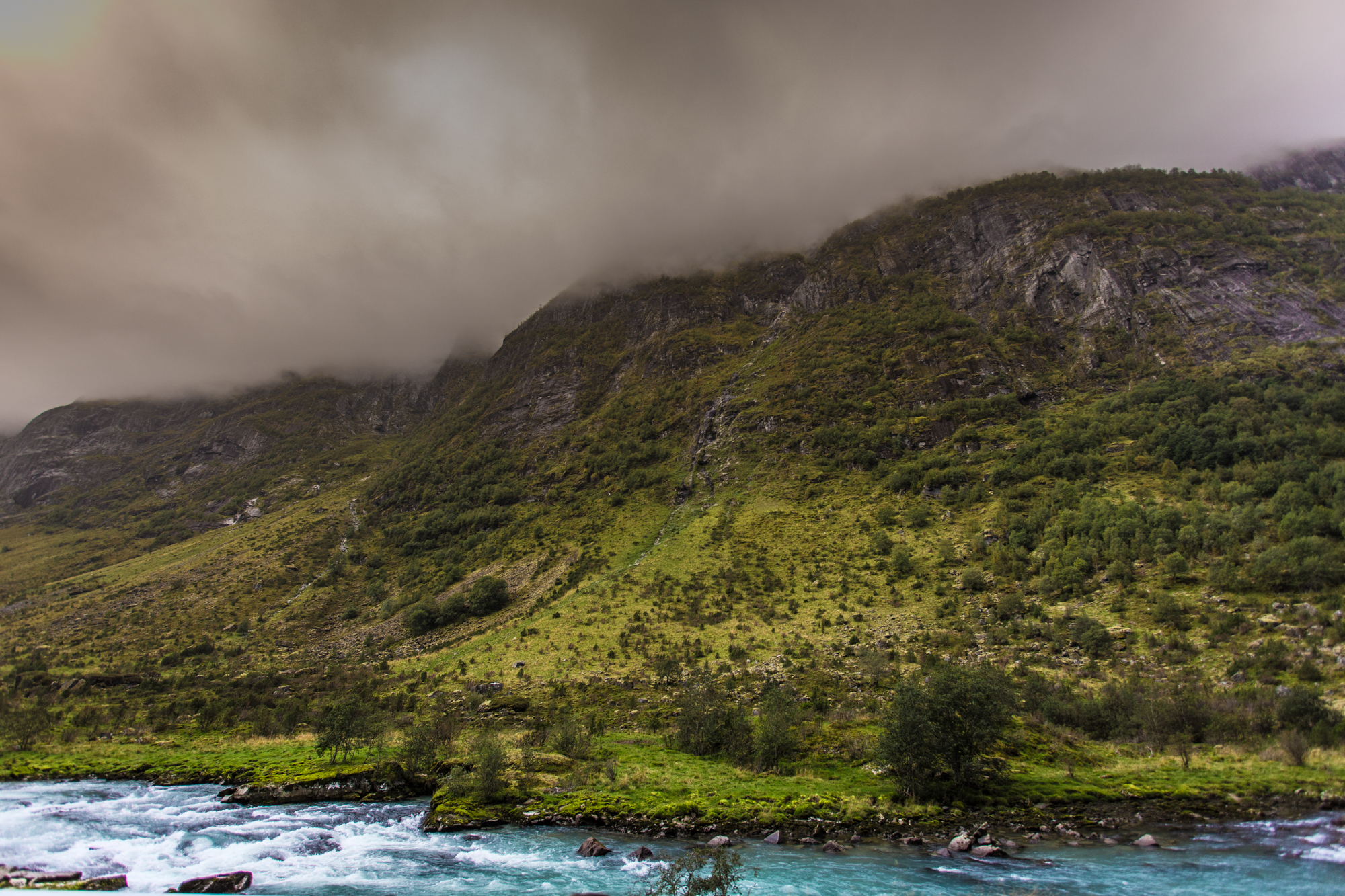 Catching some rays on one of the many ferry trips. Photo: Lewis Harrison-Pinder 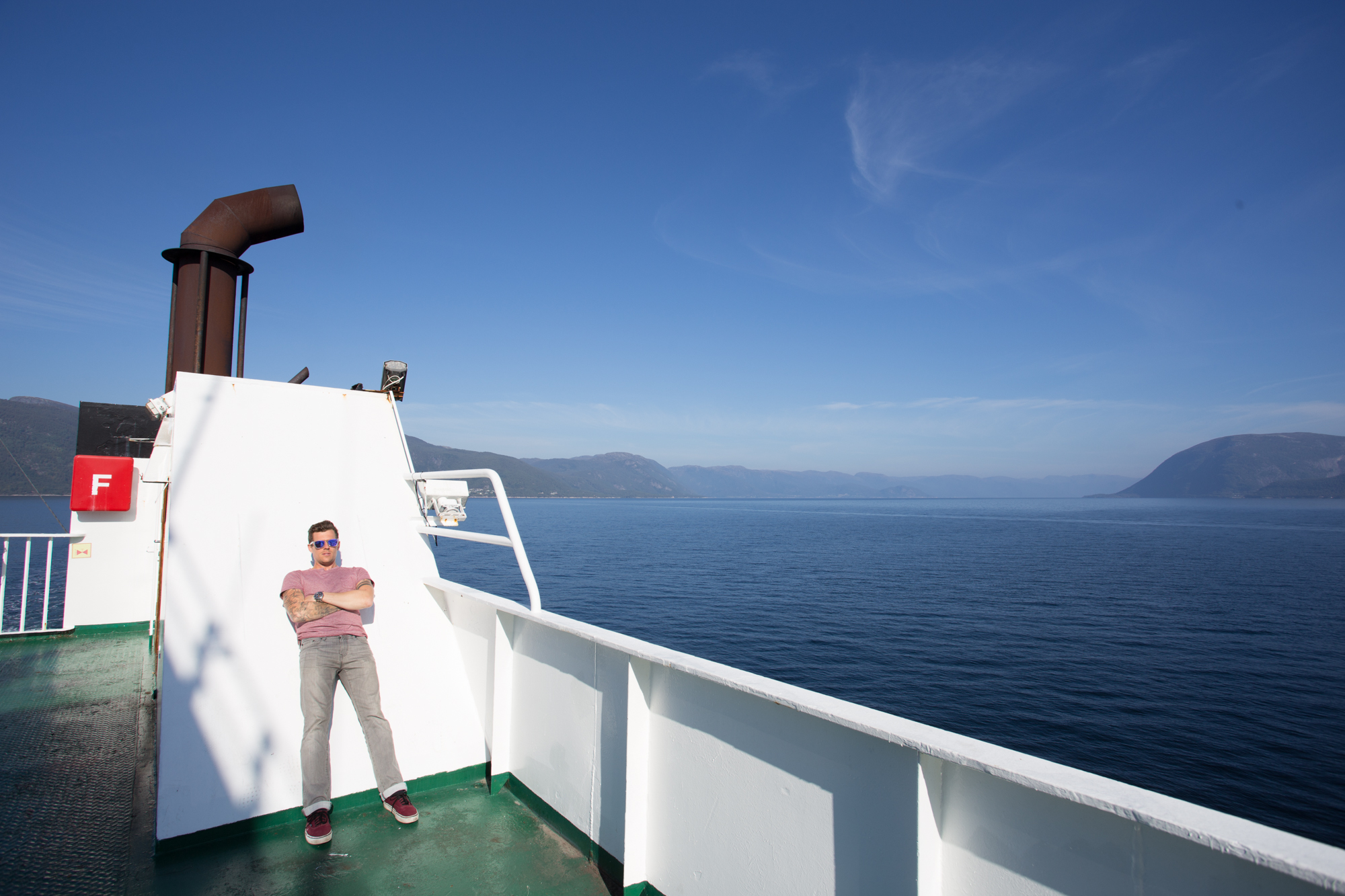 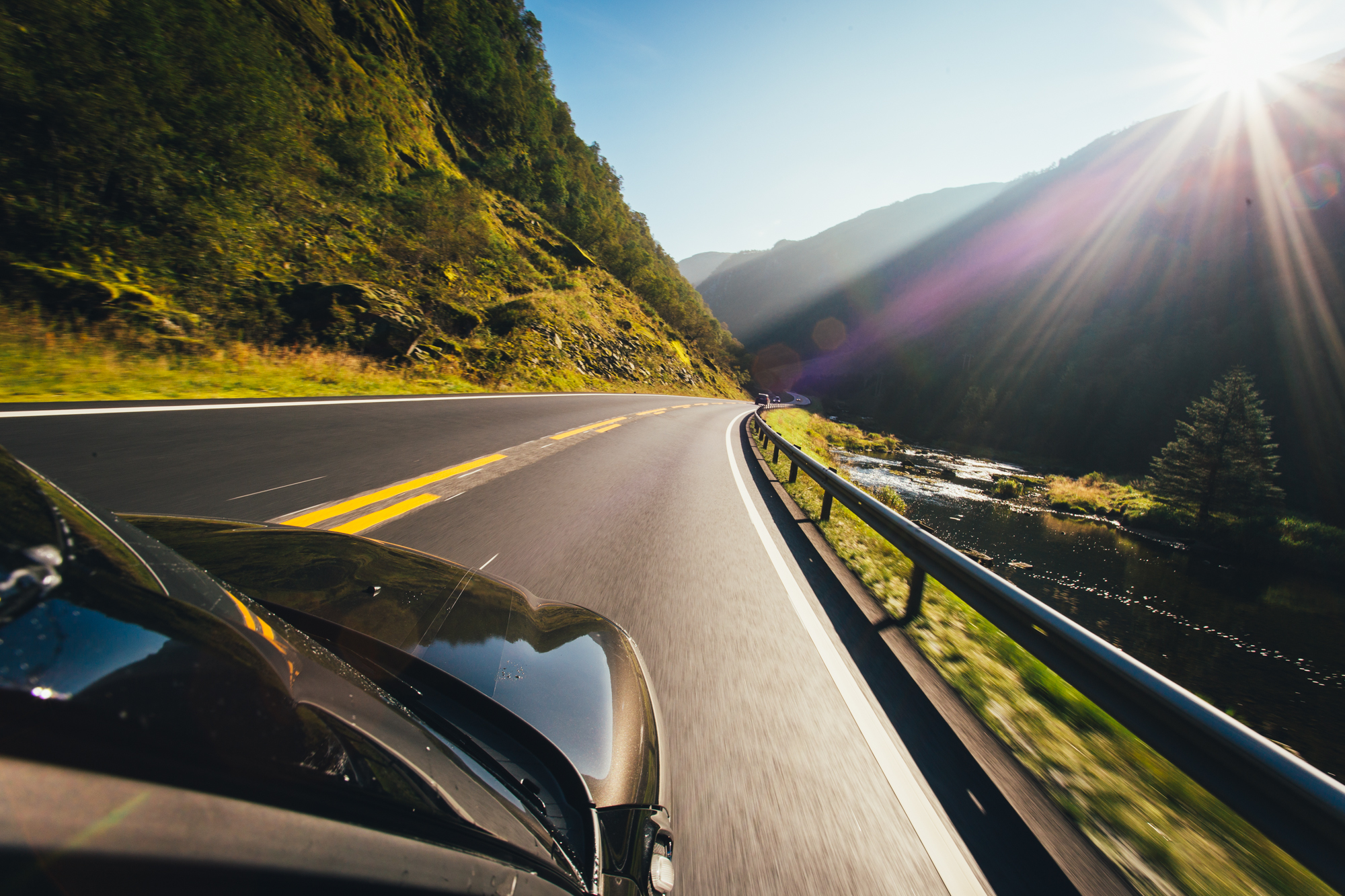 Sharing a glass with the locals. Photo: Lewis Harrison-Pinder 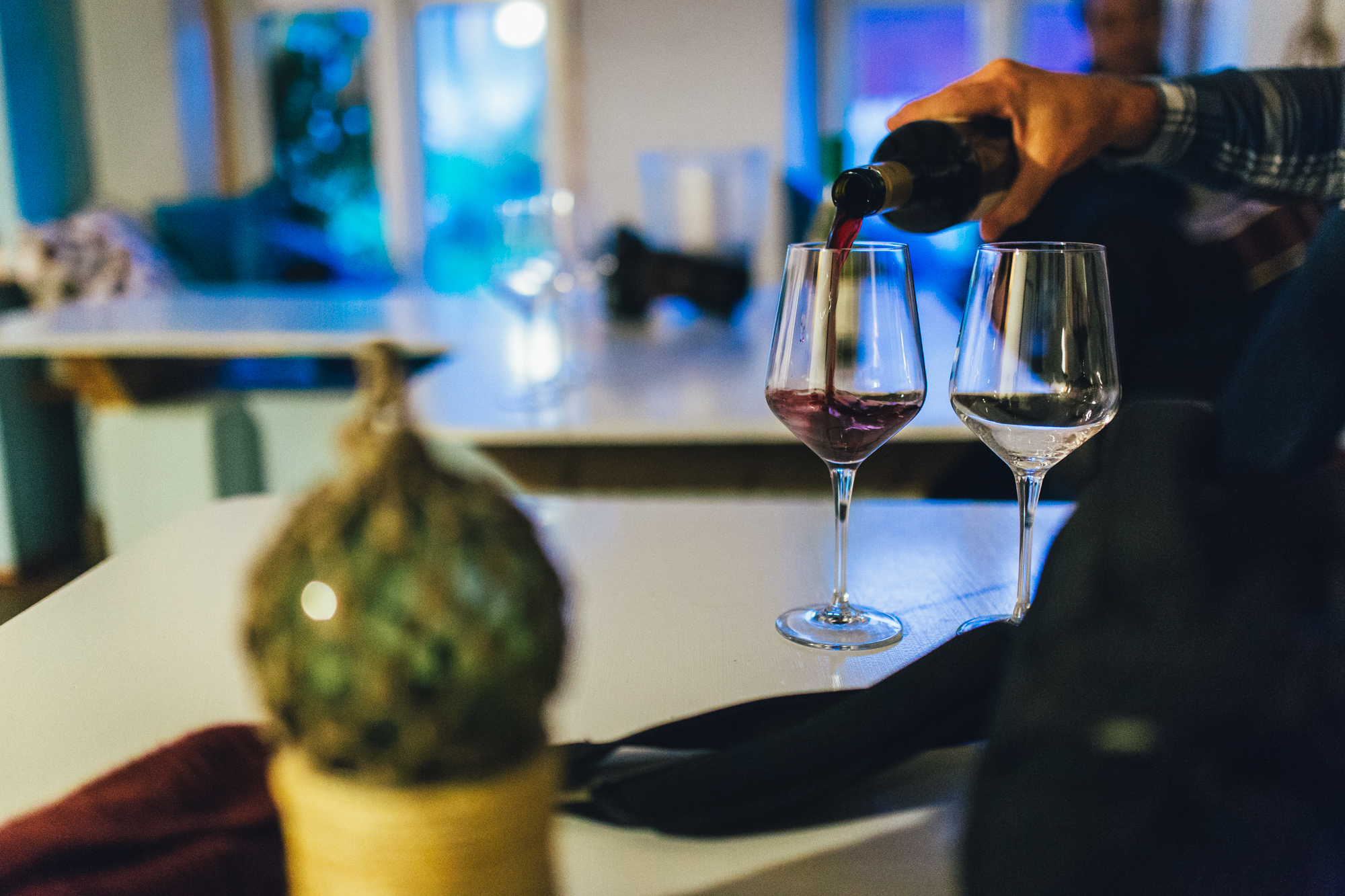 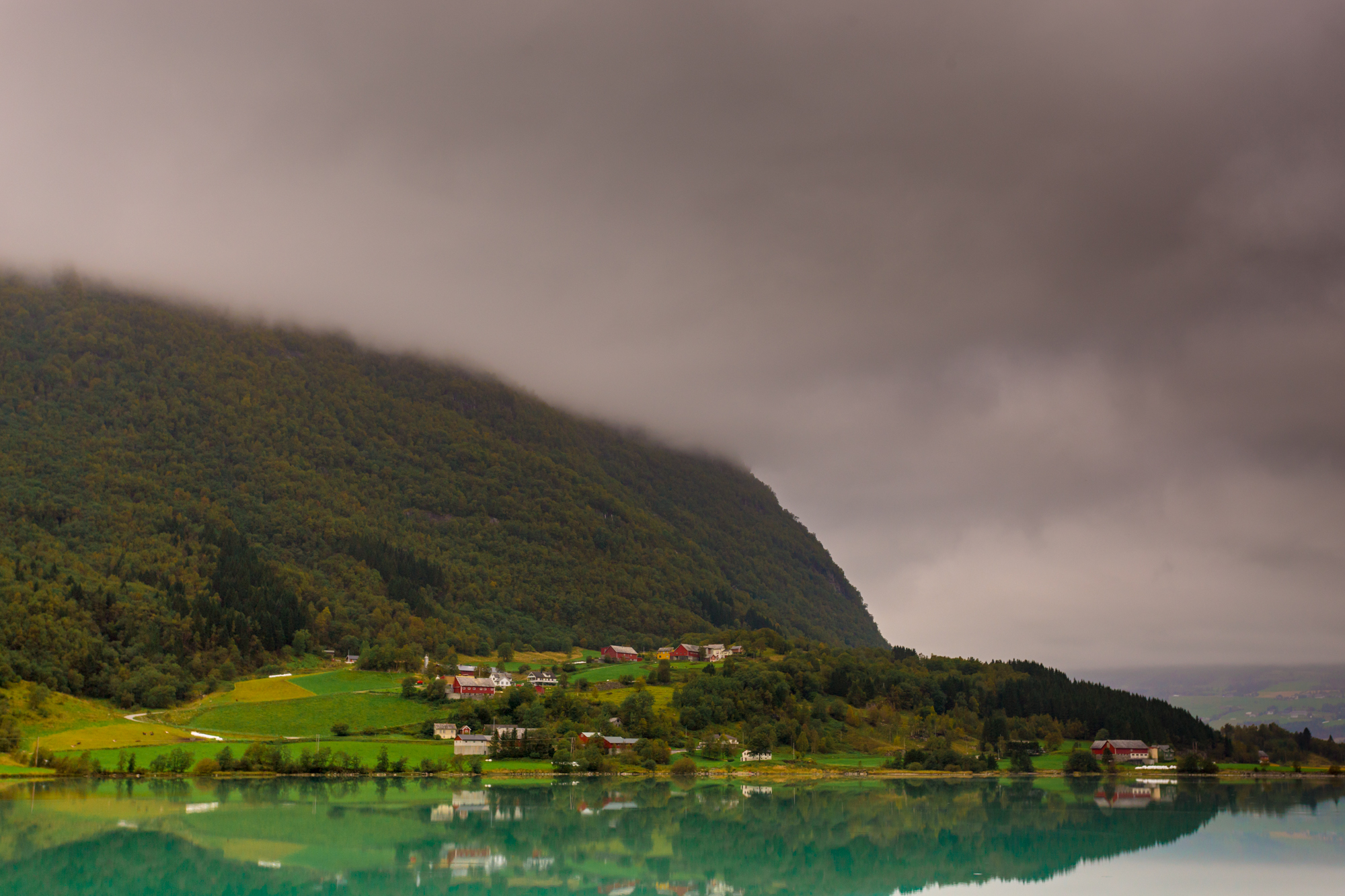 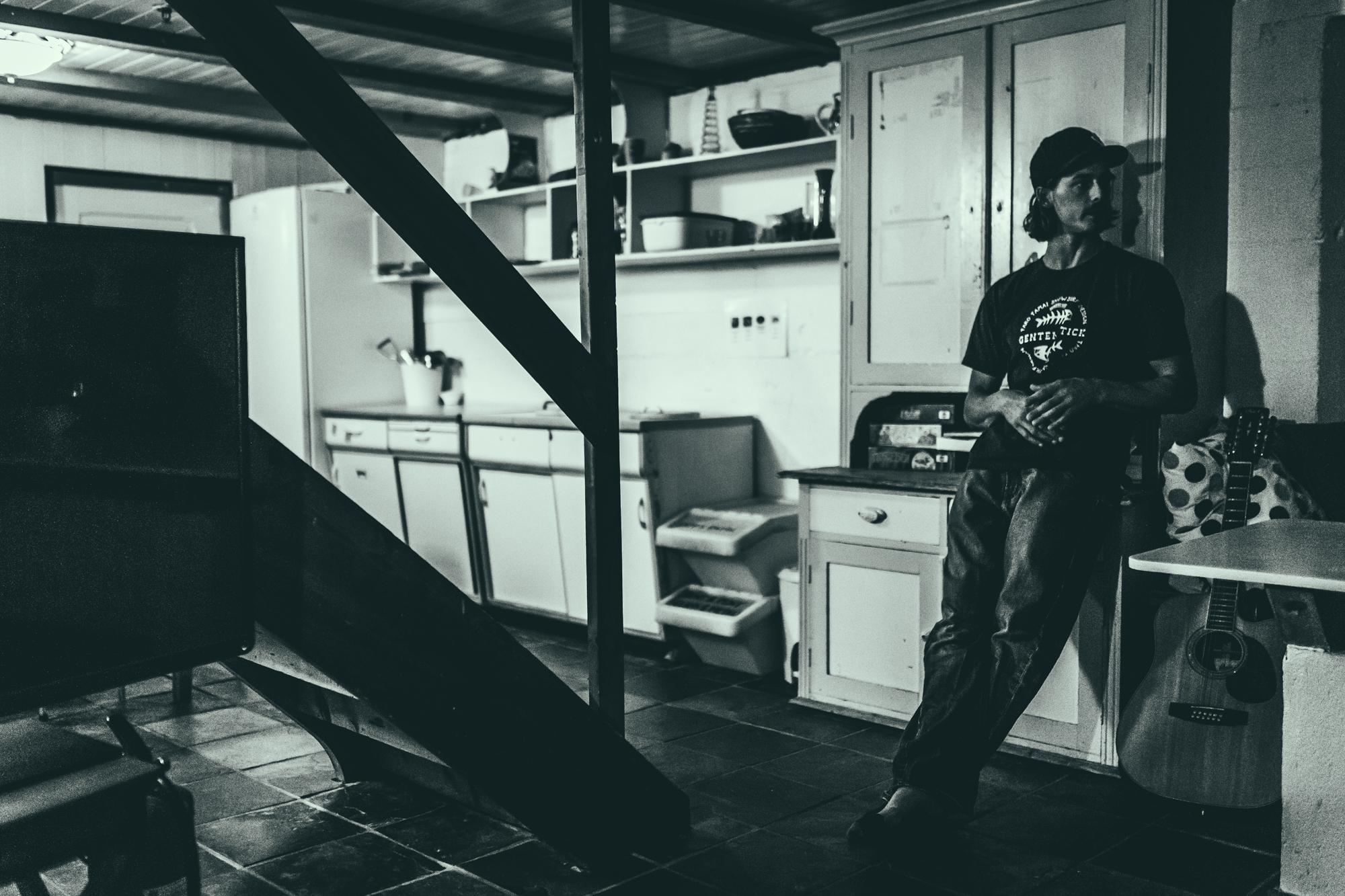 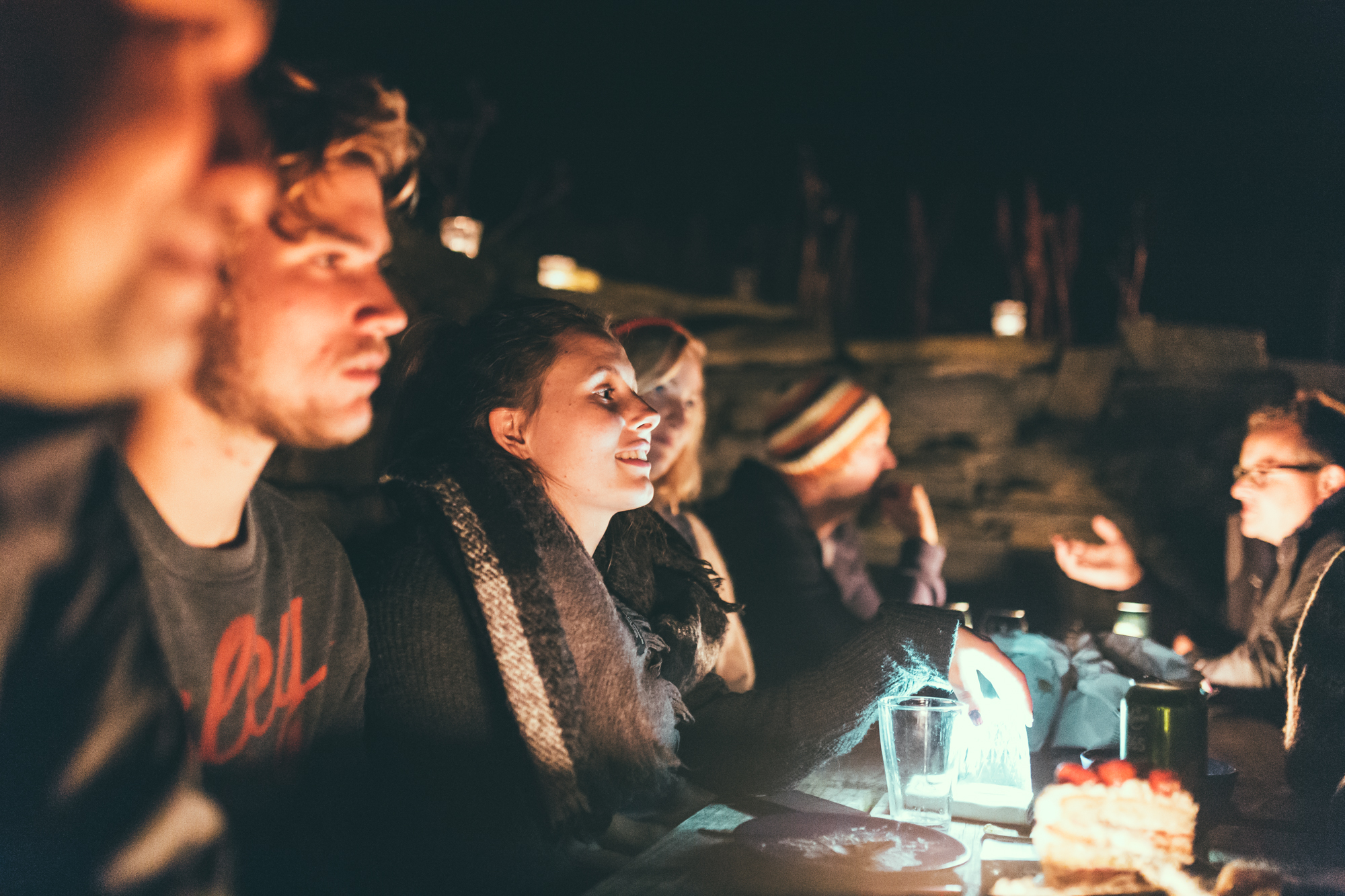 The surf may be small but the scenery is big. Photo: Lewis Harrison-Pinder 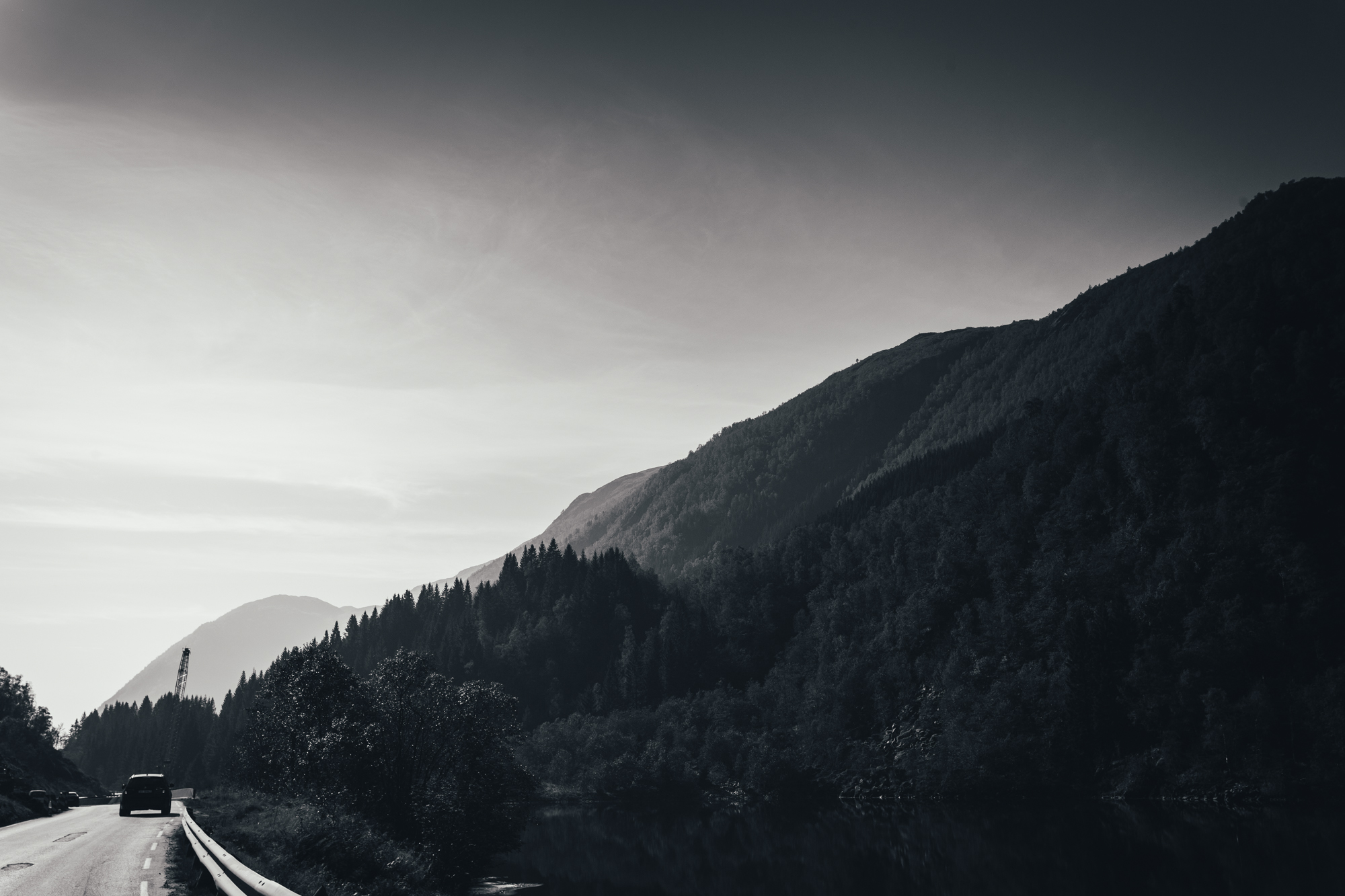 LaPoint of it all

The next morning we awake to grey skies and the smell of fresh coffee emanating from the kitchen. The staff at LaPoint are a friendly bunch – the place is set up like a large house so all guests share a kitchen, dining and living area; gassing with your fellow housemates is pretty much unavoidable.

We quickly begin quizzing the team about surf reports and wave height only to be told it was a pretty poor forecast compared to what they are used to. The large, sand-bottomed c-shaped bay at Hoddevik – dubbed H-Bay – is perfectly set up to receive south-westerly and westerly swells produced by raging storms in the North Sea.

On a good day, perfect corduroy lines march from the open ocean and down into the bay, which is flanked by two giant rock mountains either side of it, until flawless waves finally peel and break on the powdery white sand of the beach.

A large chunk of the previous day’s drive had been carried out in the dark, so the full force of Hoddevik’s natural beauty hasn’t really hit until this morning. The approaching route winds its way along tight, single-track roads that begin by hugging vast fjords before climbing the weathered hills.

Upon reaching the summit, the scene opens up to a view of the tiny village of Hoddevik below, home to around 15 permanent residents and a couple of farms. Nestled between two enormous mountain faces is the bay, which is so clear and blue, it looks a bit like a melted glacier mint. 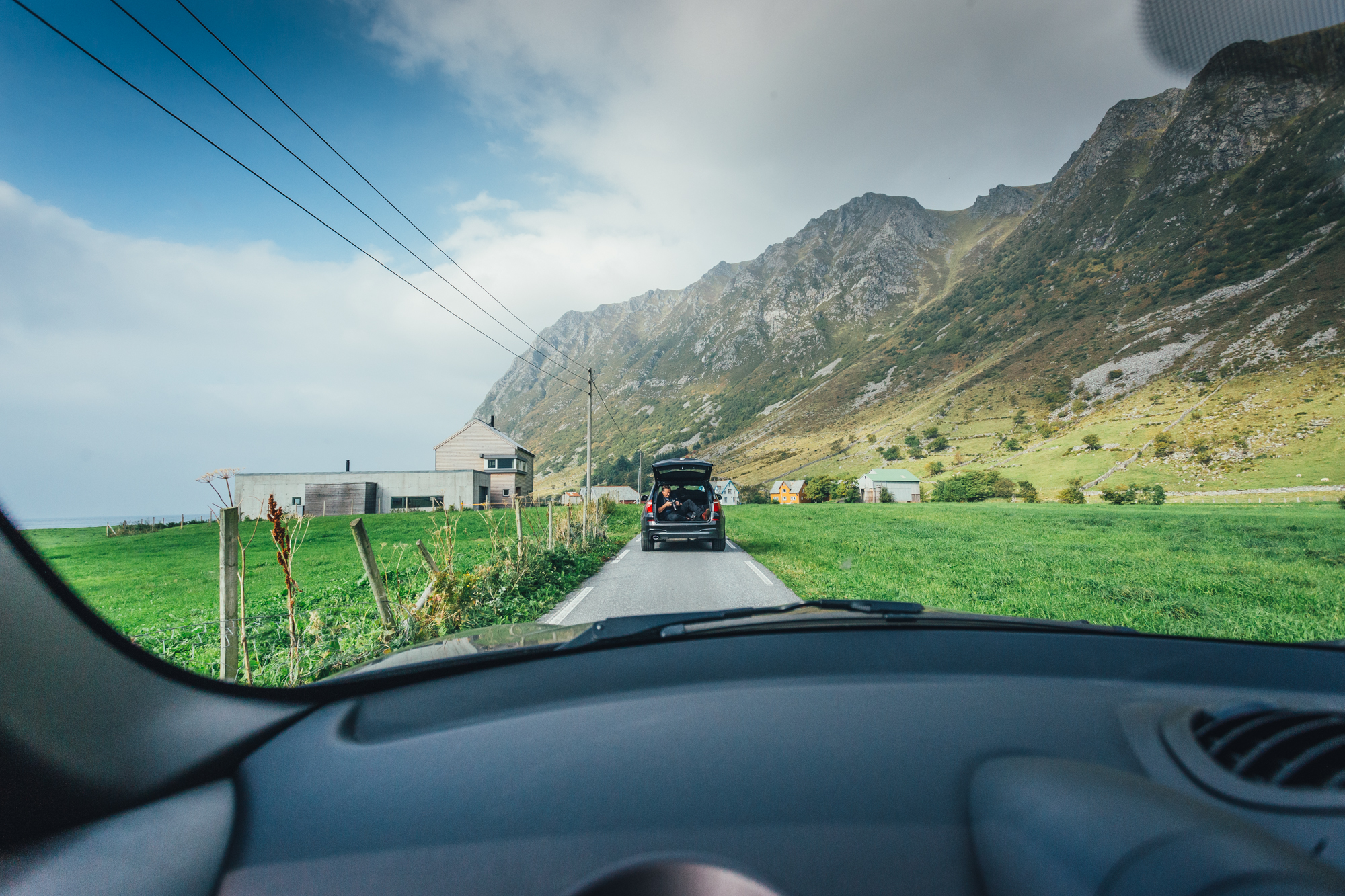 Head for the hills

The road that leads into the small village is like a mini Stelvio Pass and anyone willing to adventure a little further can find some of the most beautiful blacktop seen in Western Europe.

It’s also completely empty, with drivers able to sit behind the wheel for hours on end and only pass a handful of other cars.

Speeding fines are eye watering in these parts of the world but you’re more likely to win the lottery than you are to spot a traffic officer. Most villages on our route to Hoddevik didn’t even have a public loo let alone a police station.

It really is a wild and slightly disorientating driving experience, with the seemingly unchanging scenery doing its best to play tricks on tired driver’s minds. But it’s worth it. 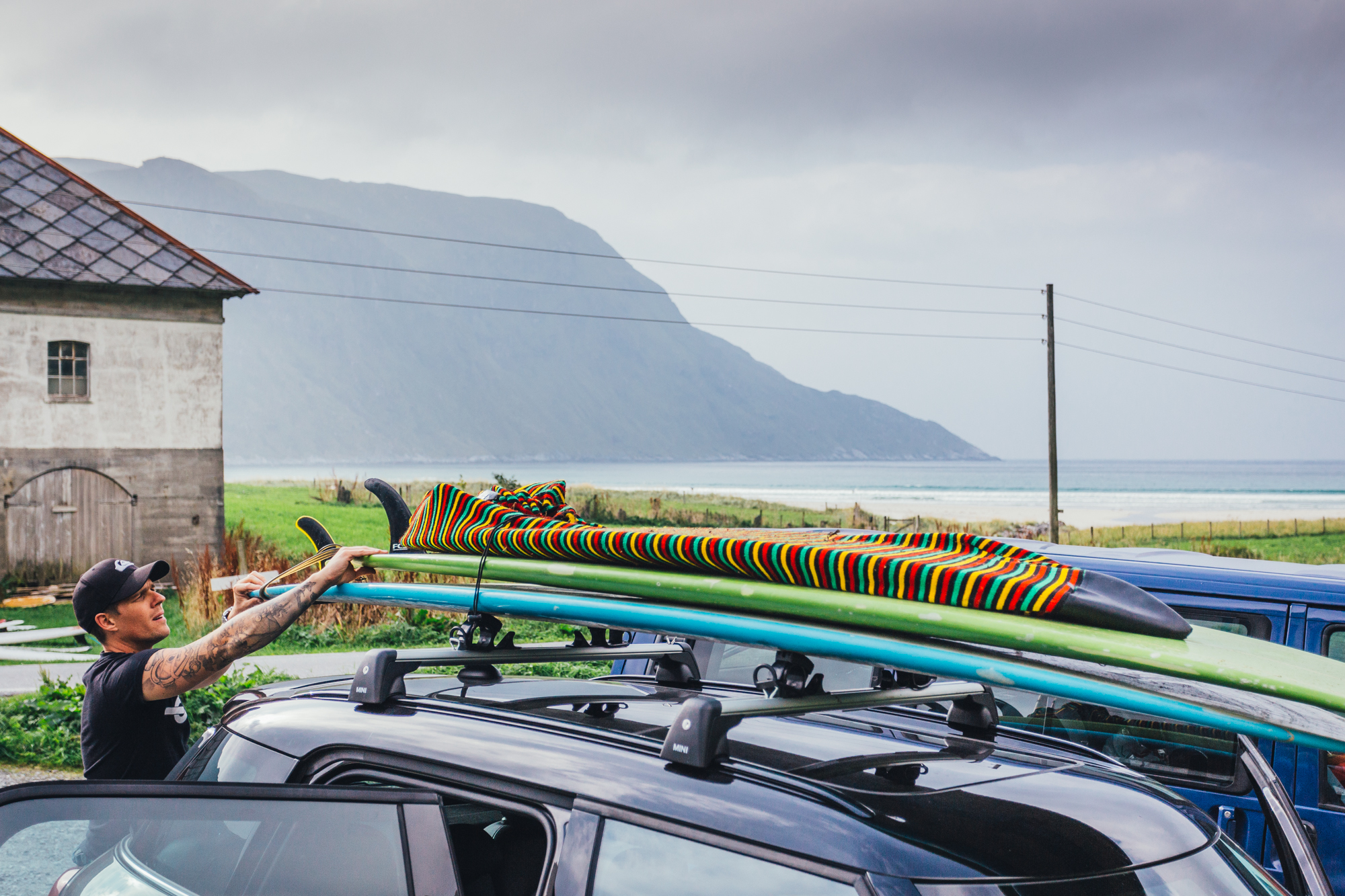 “Nothing much compares to this place,” explains Mads Jonsson, ex-professional snowboarder and resident board rider at the Strandro lodging and restaurant located just in front of the bay at Hoddevik.

“We go out and hunt most of our food, we fish the seas, we forage and we make the most of our surroundings,” Mads explains. “Guests can experience what it is really like to live and surf in the wilderness but with the bonus of hot showers and comfortable beds,” he adds.

The former pro regaled us with tales from his past over bottles of red wine and fried fish. He discovered surfing and escaped the madness of California, swapped the daily grind for hunting and fishing. We drank too many bottles, played some guitar and finally stumbled back to our bunks at LaPoint via a pitch black stretch of road, only to be greeted with a steaming hot tub, more beer and freshly baked cakes.

Eating, drinking and partying isn’t particularly conducive to an early start and a massive drive back to the airport but we drag ourselves out of bed, pour more coffee and load up the Minis for more mileage.

We say our goodbyes.