We are at a tipping point for electric vehicles, where it feels like every piece of automotive news and fanfare announces another car or motorcycle with battery packs at its core.

Manufacturers across the board are rapidly replacing the internal combustion engine with hybrid or EV powertrains and even the big-name supercar makers of this world are looking towards the electric motor as a way of improving performance and reducing emissions.

The motorcycle, a purchase that has typically been made with the heart rather than the head (in the Western world, at least), has largely been immune from this impending march of electrification, but it seems even the evocative V-Twin isn’t immune from progress.

Zero Motorcycles, a Californian crew of tech-minded enthusiasts, has arguably been ahead of the all-electric motorcycle curvature, producing serious battery-powered bikes long before Harley-Davidson mentioned its LiveWire.

The DSR Black Forest is one of its more adventurous models, boasting mini-BMW GS styling, additional crash protection and hard shell luggage for stashing the all-weather kit. But sitting in place of an internal combustion engine is a whopping 18kWh battery and Zero’s very own Z-Force electric motor.

“A zip up a slippery hill without any rider aids is a surefire way to focus the mind, put it that way”

In this DSR guise, it put out an impressive 70hp at as little as 3,500rpm and a punchy 157Nm of torque. With nothing in the way of driver aids, such as stability and traction control, the rear wheel will happily spin like a maniac on almost any road surface. It’s nothing to be sneered at. 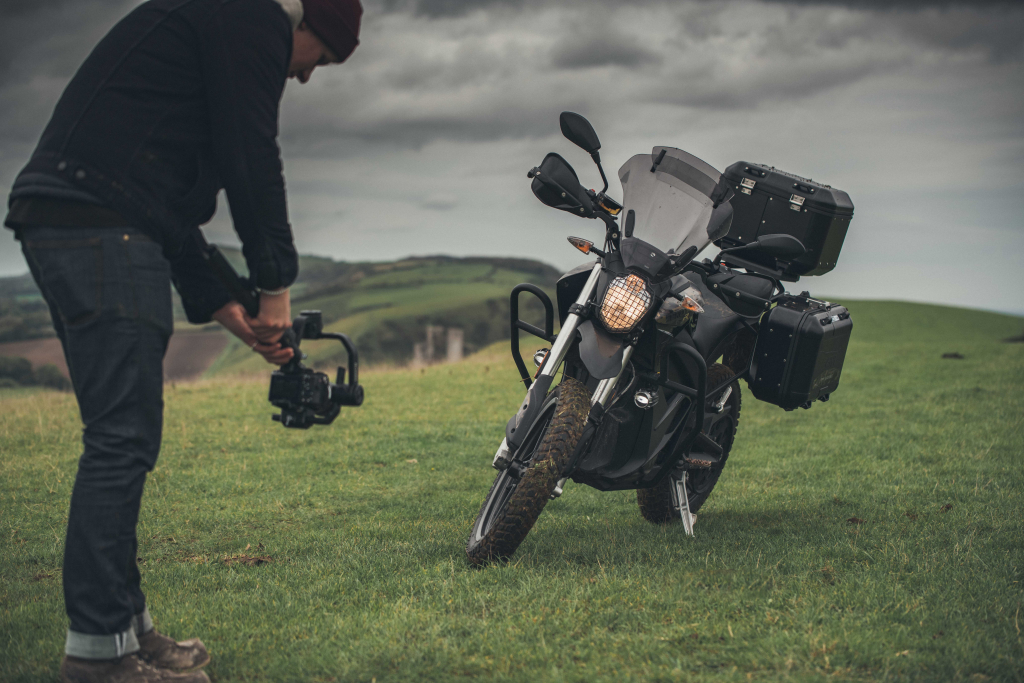 Thankfully, the user can tether a smartphone app and toggle the amount of power the potent electric motor produces, which comes in very handy when venturing on to the slippery stuff. And damn, did things get slippery on this outing.

With zero emissions emitted from a tailpipe and nothing but the faint whine of an electric motor, the Zero DSR is perfect for ripping up the local trails that we love to frequent. Now, we’re not hooligans and like to keep things legal when heading off road, so tend to seek out some green lane spots that don’t get us in too much trouble for disturbing the peace.

Still, that doesn’t stop ramblers, horse riders and cyclists from getting shirty when the sound of a screaming two-stroke engine spoils the local tranquility. There’s no such worry here with the Zero, as it almost silently tears up a muddy trail towards one of our favourite elevated viewing points. 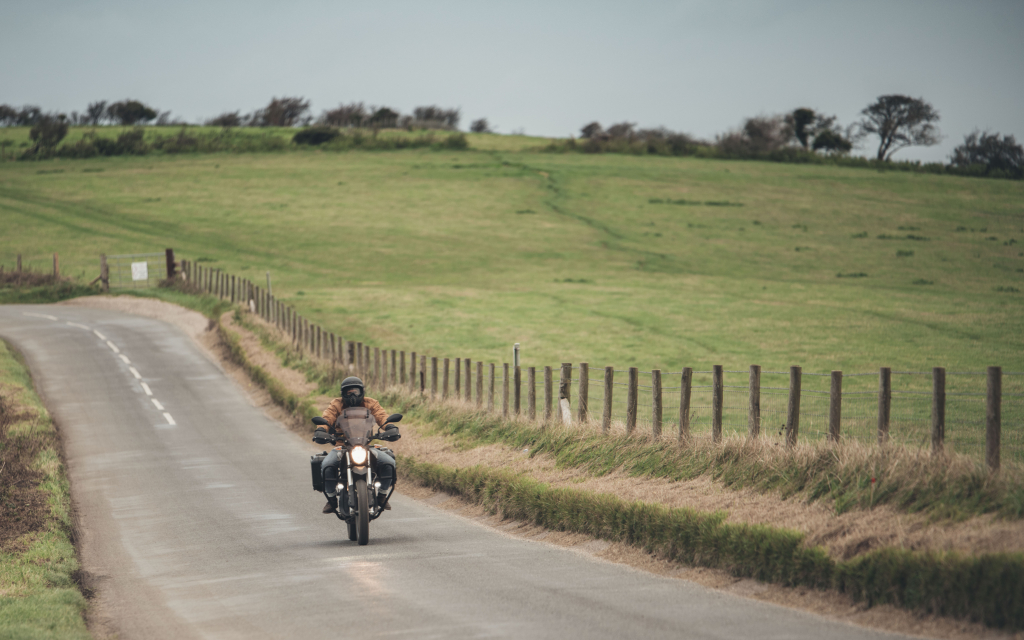 The plan is to ride all day, braving the weather and only stopping when the batteries need topping up. When night falls, we will set up camp and ride some more in the morning. There’s no better test of an adventure bike than to head towards nature and venture properly off-grid.

Granted, slightly more planning is involved when you can’t stop at any old petrol station, but it’s simply a case of firing up the Zap-Map app and locating a suitable charging spot somewhere along the route.

“The Zero DSR is perfect for ripping up the local trails”

With this optional Charge Tank fitted, the Zero DSR takes around two hours for a full brim from a fairly standard 7kWh outlet. The 2020 SR-F can handle beefier electrical inputs, but even at this relative trickle, it doesn’t take long to add charge to a partially depleted battery pack. 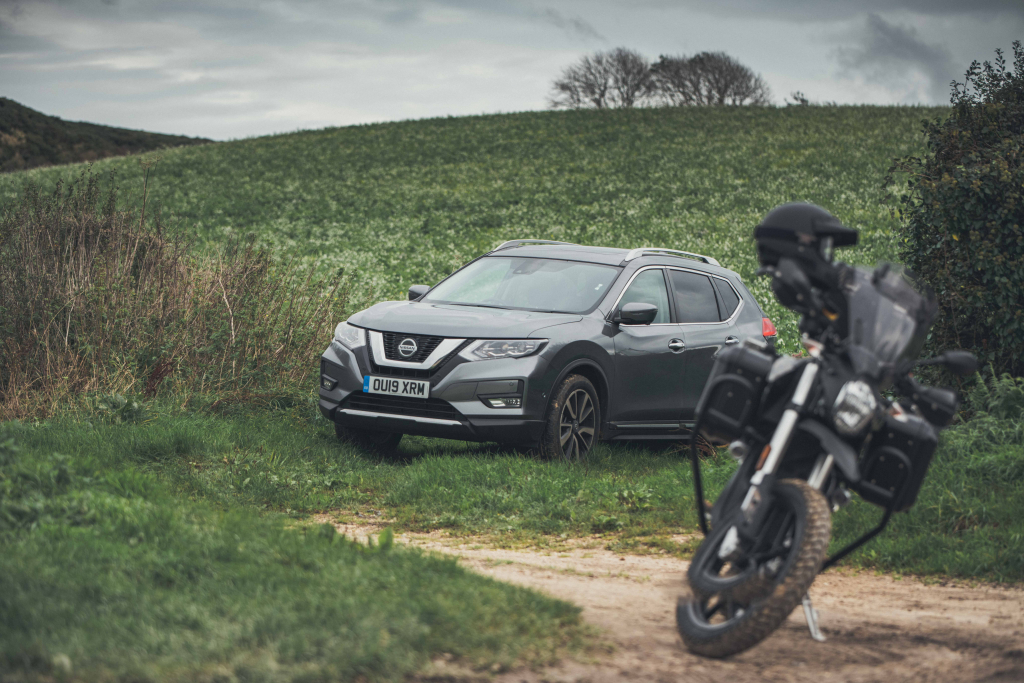 A stop for a hearty coffee and a warming lunch is enough to have all parties refuelled, so we once again leave behind the hustle and bustle of village life and make a beeline for the routes less travelled.

The Zero DSR’s on-road manners are impeccable, proving hugely comfortable overall one distances and exceptionally peaceful on the ears. Riding in near silence takes a little getting used to, and there is always the worry that other road users simply won’t notice the jet black machine hurtling up to their mirrors, but it heightens the senses, allowing he rider to become more in-tune with the surroundings.

It is a heavy beast though, and at 241kg without anything in the panniers, it’s a lot of bike to heft around parking spaces. But the sheer grunt delivered from the Z-Force motor in enough to propel the DSR Black Forest from rest to alarming speeds and that mass mystically melts away when you start threading then bike through corners. 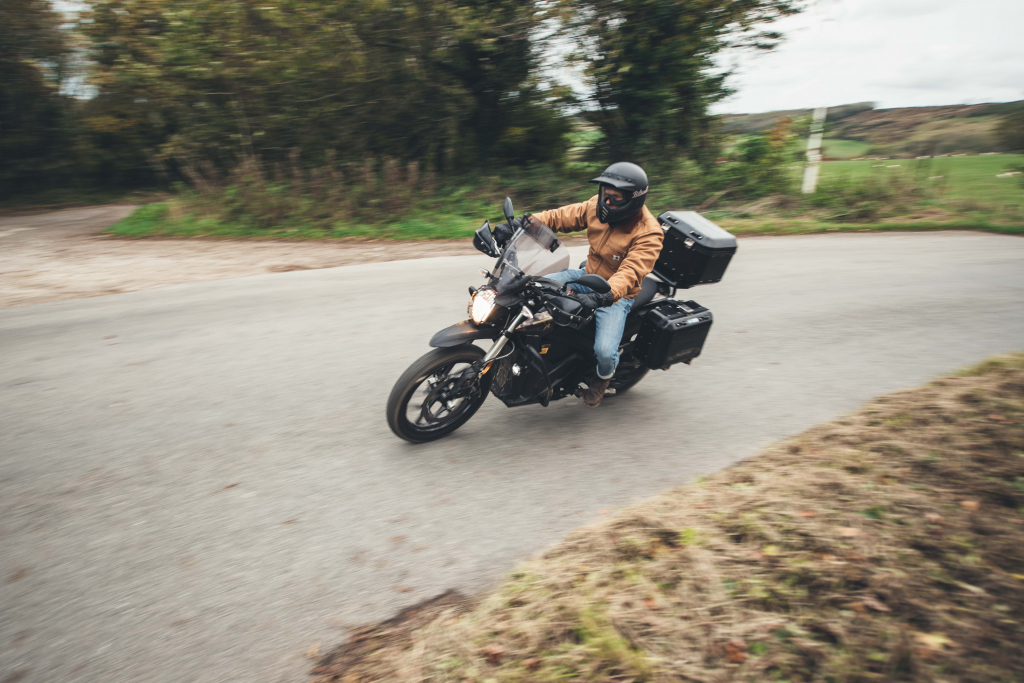 With the comfort of a local charging point firmly in the mirrors, we peel off the tarmac and take some local byways that meander over hills and across loose gravel surfaces. Recent, seemingly never ending rains means the ground is buttery soft and the mass of the bike starts to rear its ugly head.

If we weren’t so far from assistance, we’d have let a bit of air out of the tyre for extra grip, but the heady mix of ludicrous torque, a weighty machine and boggy quagmire underfoot ensures progress is slow, technical and treacherous. A zip up a slippery hill without any rider aids is a surefire way to focus the mind, put it that way.

A small thumb switch located near the throttle grip quickly changes the driver mode from Sport (where full power is unleashed) to Eco, which nicely tempers the torque and feels like the natural setting when the trails get too sodden. 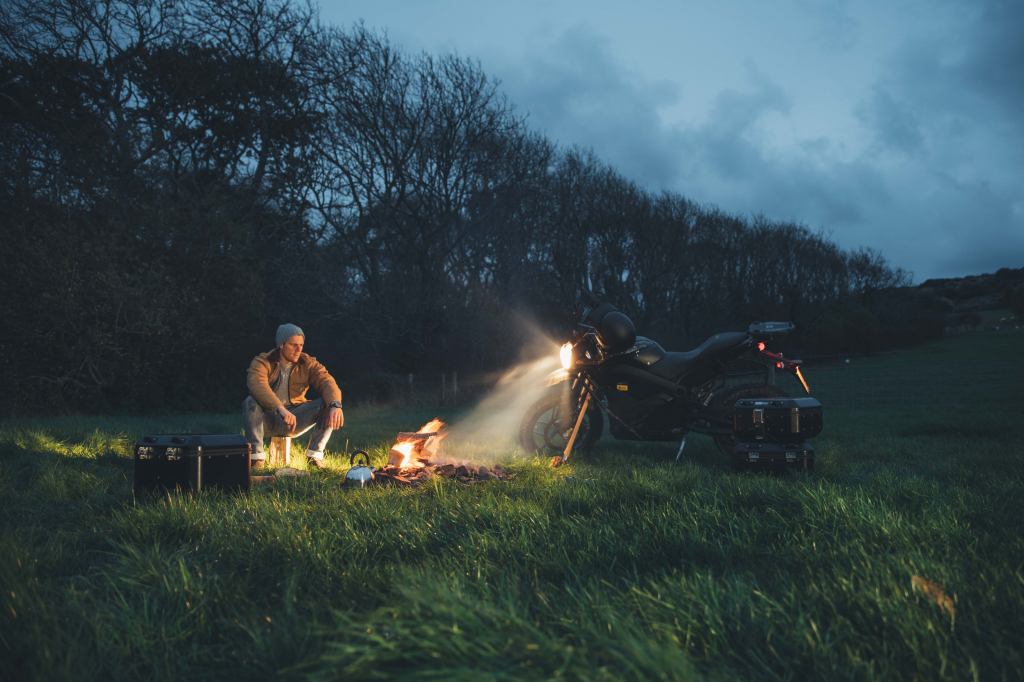 Unfortunately, it curtails the power a little too much and the rear wheel still wants to spin at any opportunity. With the correct tyres and a bit of app-based throttle mapping, the DSR Black Forest would likely make a pretty convincing adventure bike, but it’s a bit of a handful in this guise.

“With prices starting at £16,590, it will take a fairly dedicated adventurer to fork out that sort of money for the thrill”

Once the worst of the terrain has been covered, it’s a gentle cross-country cruise to our overnight camping destination, where gear can be removed from the spacious integrated luggage and kettle chucked on the fire.

This final hack across gravel and grass is arguably the most exhilarating. The dying light calls for the LED auxiliary lights to be fired up and the sound of wind rushing over the visor never gets old. 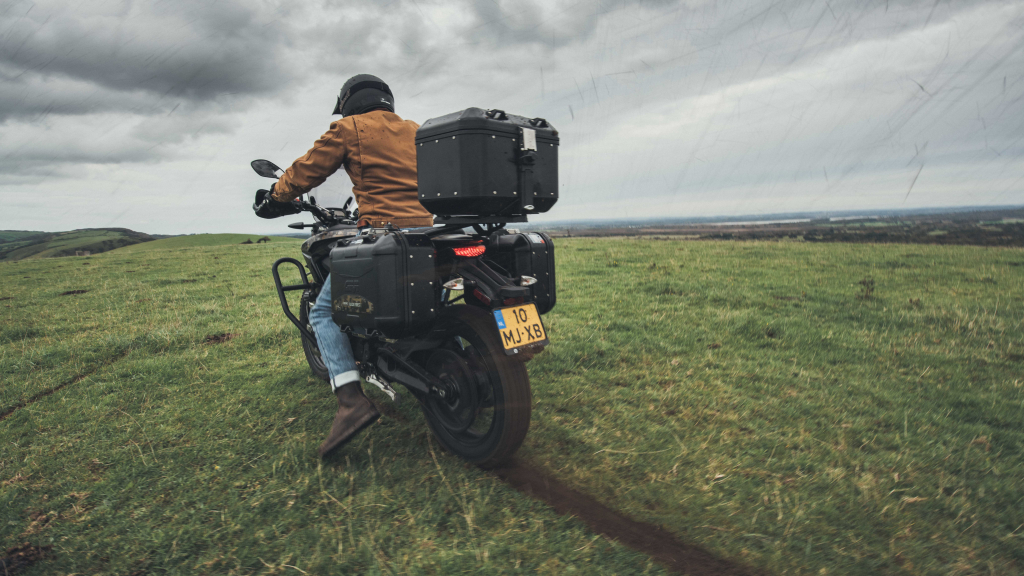 A lack of engine noise and popping exhaust notes means it is possible to take in the sights, smells and sounds of the surrounding environment. It is eerie at first, but as civilisation is left further behind with every mile, the appeal of electric motorcycling becomes more obvious.

Alas, with prices starting at £16,590, it will take a fairly dedicated adventurer to fork out that sort of money for the thrill and we’re sure the novelty wears off when the owner realises the public charging network ends where the off-road fun begins.