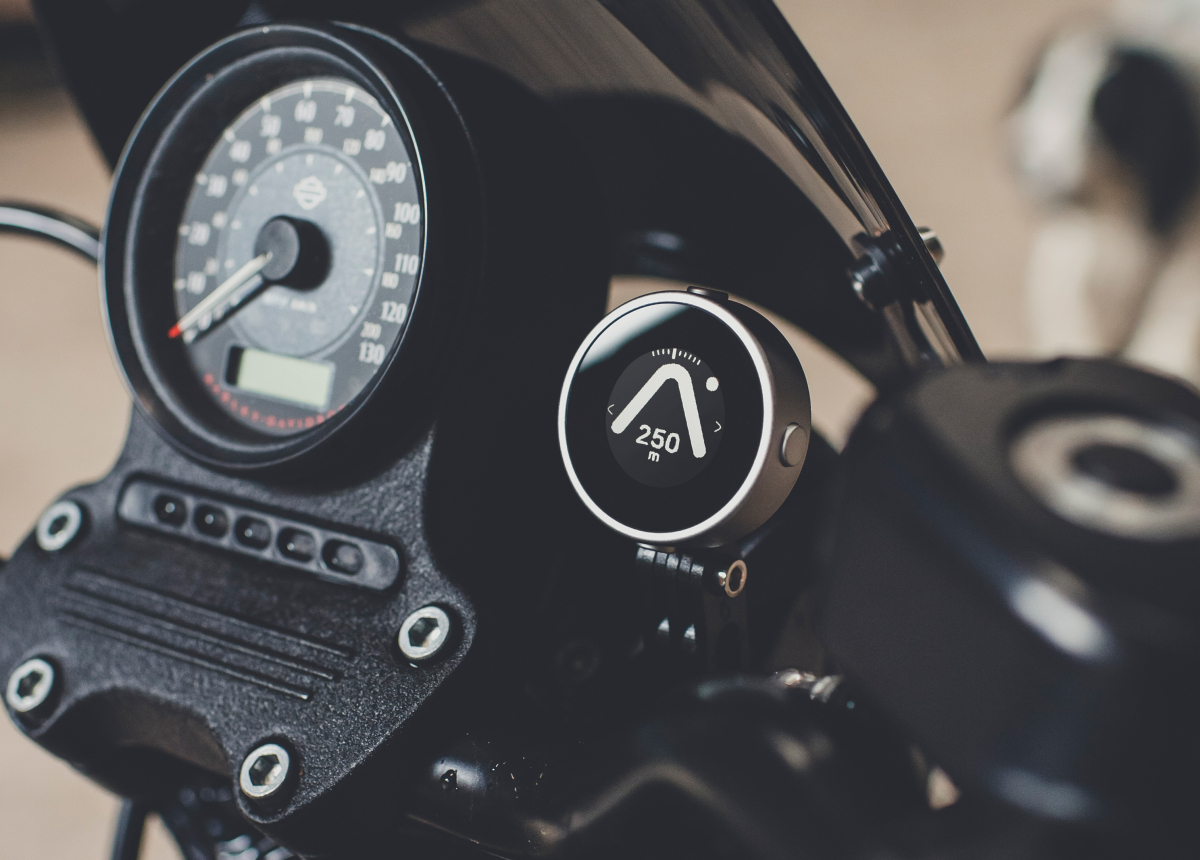 Motorcycling is a great excuse to get lost in your own thoughts. A distinct lack of distractions from touchscreen infotainment systems, hands-free phone calls and talkative daytime radio hosts means it is just you, the hum of an engine and the open road.

But anyone who regularly rides on two wheels will attest to the difficulty when navigating to a set destination, without constant stopping to check Google Maps on the phone, taping some scribbled directions to the tank or relying on tinny vocal instructions from a set of headphones shoved underneath a helmet.

Beeline, the tech start-up from London, made waves when it unleashed its tiny cycling nav on a famous crowdfunding platform a few years back. The diminutive device, which is no larger than your average diving watch face, features a simple user interface that consists of a large monochrome arrow, distance countdown and next turn indicator. 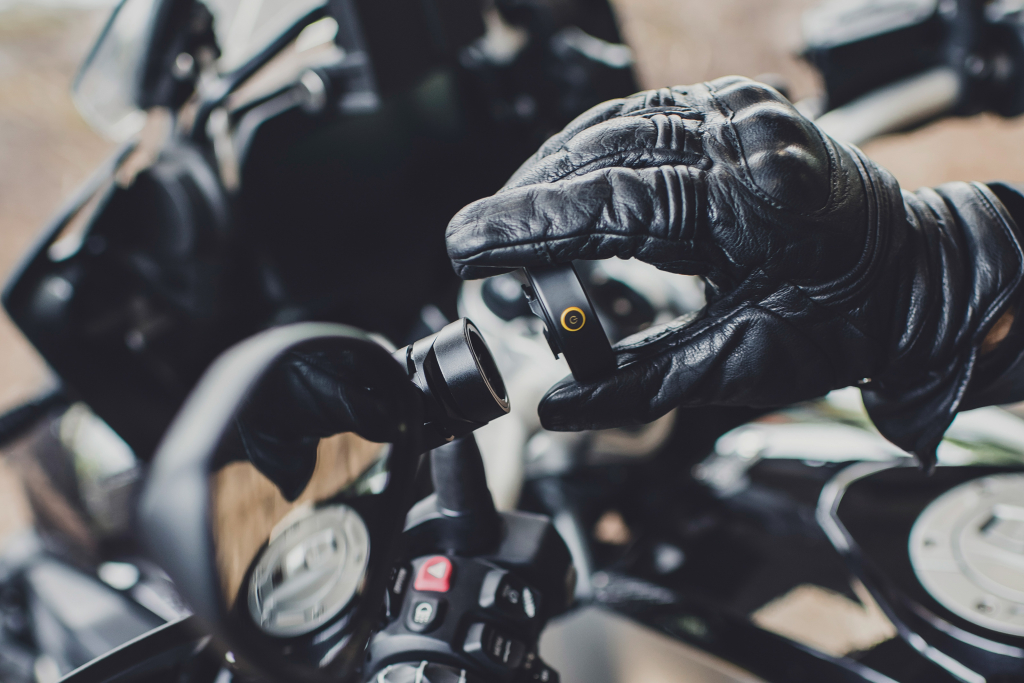 It feels more like a compass than a traditional nav system, seeing as there is just a screen and three buttons (one is power on/off), but users interact and plan routes via an equally simple and stylish smartphone app.

The buttons are the key difference between the original Velo and this latest Moto version, as the former uses a touchscreen that’s not particularly glove-friendly. Moto is also more waterproof and features additional pointers for open road motoring. But more on that later.

Choose either a route mode, which uses the Google Map interface to properly plan a journey, or select Beeline’s more meandering, adventurous Compass routing that requires the rider to simply follow the arrow until they get to their chosen destination. 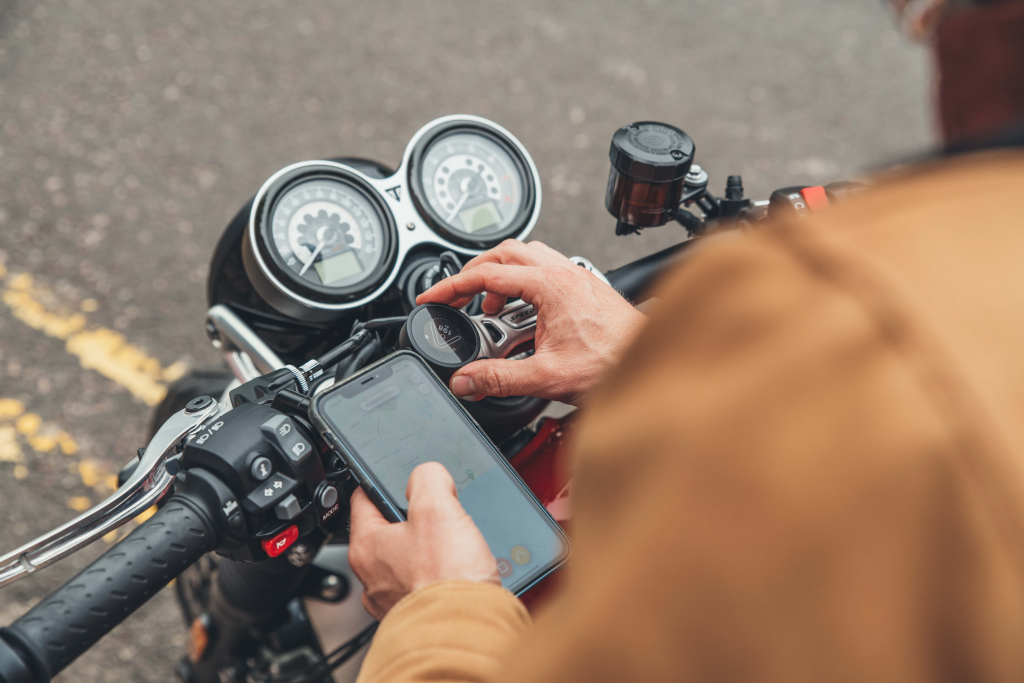 The latter mode is designed for the more adventurous purists, who perhaps don’t mind being taken down some narrow, bumpy country lanes to get to the next coffee stop. There’s also no need to update any maps, as the entire world is your oyster, straight out of the box.

Beeline Moto: on the bike

Beeline Moto weighs hardly anything at all, so it’s really easy to mount to pretty much any motorcycle. The twist/lock mechanism is the same (or very similar) to those used by cycling computers, meaning the base can be mounted using a universal elastic strap mechanism that you might find on a Garmin device, for example.

For those who perhaps want something slightly more permanent or specific, there is a sticky pad mount, metal bar clamp, metal mirror stalk clamps and a one-inch ball adaptor for existing nav systems. 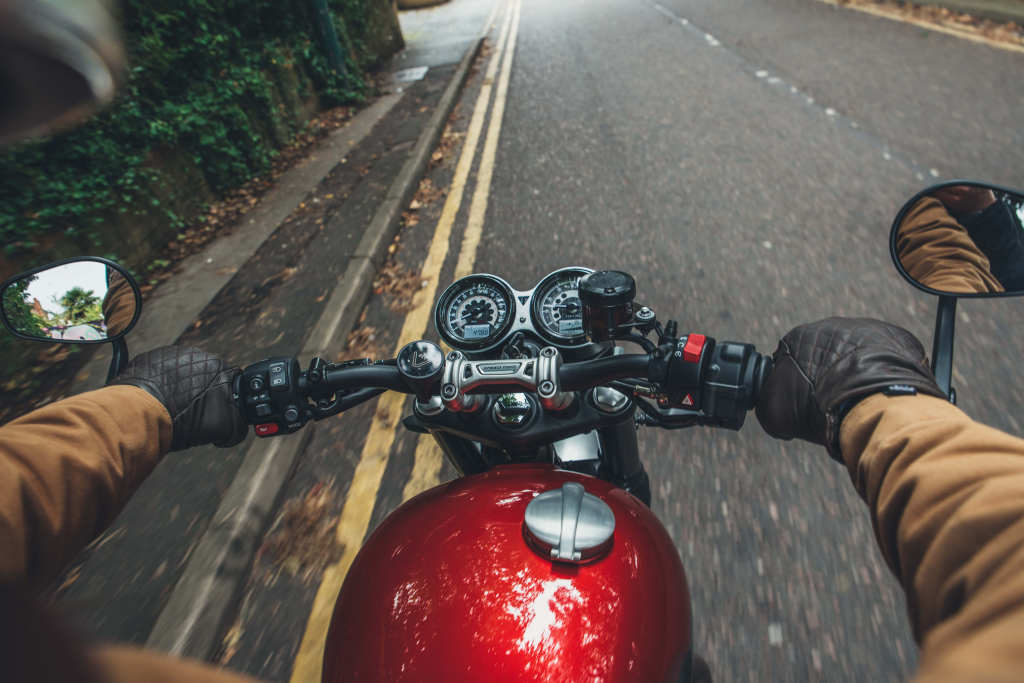 I opted for the metal bar clamp mount, which might have been the wrong idea, as dealing with the tiny hex key and minuscule bolts is a little fiddly. Strapping a couple of elastic bands around the universal mount would have been far easier, and all the traction you’ll ever need for the lightweight unit.

Irritatingly, the Ducati Diavel I was luckily piloting during this test featured quite steeply swept-back bars, meaning I could never quite get the mount in a position where the Beeline Moto’s screen was flat and, therefore, easy to read without any head movement.

It’s a very minor quibble, as most will select the correct mount for their chosen machine, and fastening it to a Triumph Speed Twin later in the week was far easier. Even on the big Ducati, it was merely a case of twisting the head slightly to get a look at the next direction. 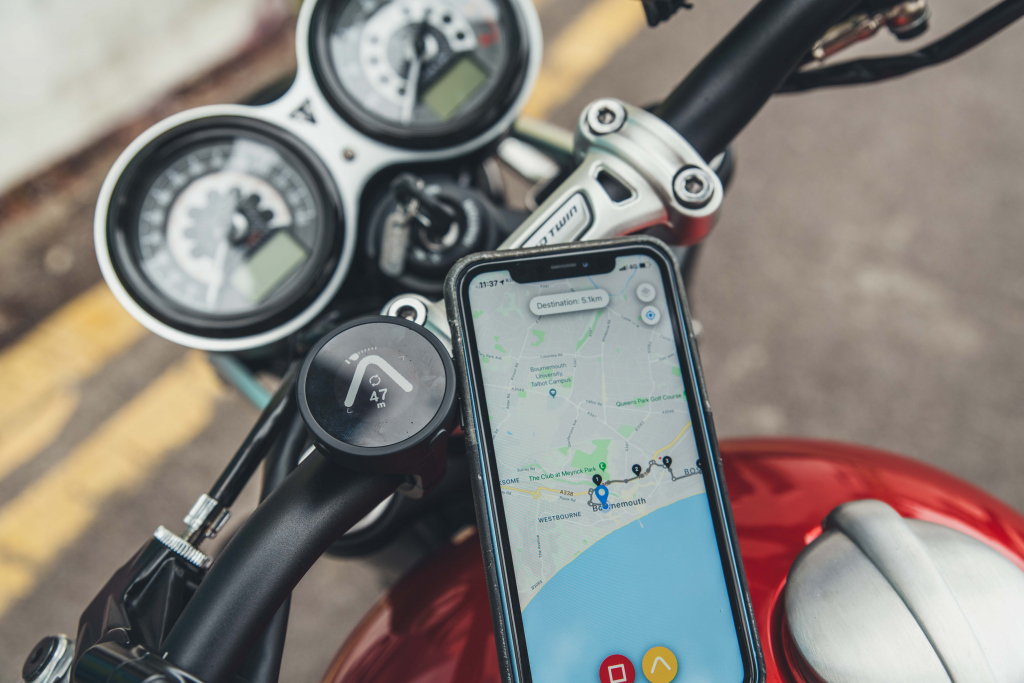 The app is beautifully simple. Its home screen consists of just two fields: one for destination input, which can be achieved with postcodes, co-ordinates or simply by searching for the name of the hotel, shop or biker hangout. The other field is an area to save a few favourite or regular journeys.

Other than that, there is another screen that, like Strava or Garmin’s ecosystem, saves previous rides and gives a breakdown of distance travelled, duration of ride and an average speed. You can share these – with accompanying imagery – to all of your fave social media accounts. But, blah blah blah.

Beeline Moto: on the road

Getting bogged down in social media sharing and average speed data sort of misses the point of Beeline Moto, which is simplicity defined. Fasten it the handlebars, fire up the app and the tiny unit immediately springs to life with a big arrow to point the rider in the direction of travel. 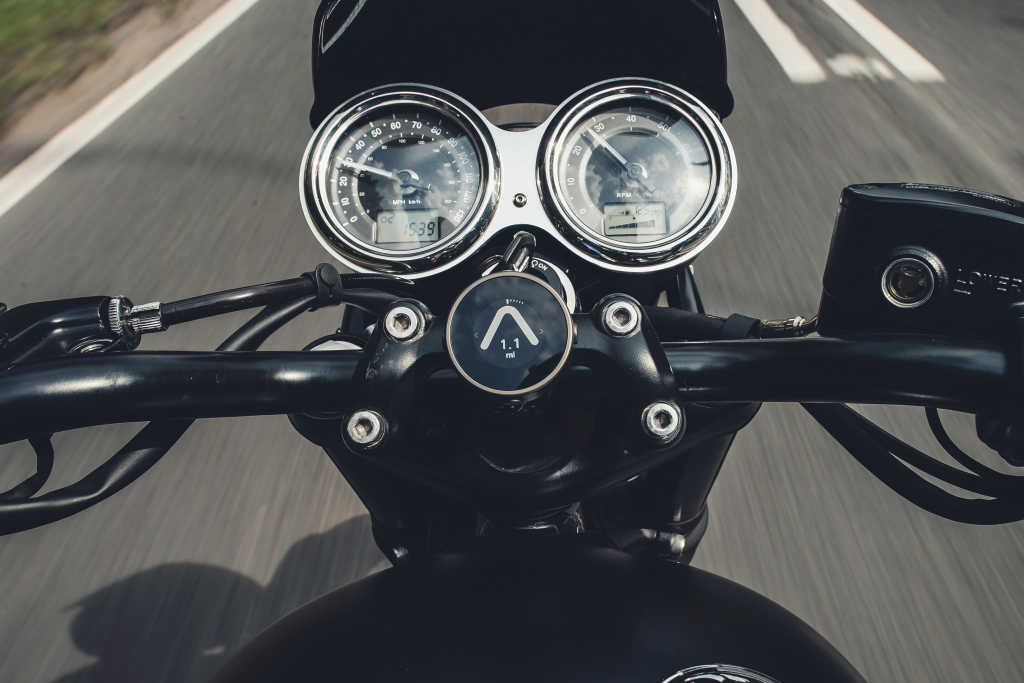 Route Mode is by far the most comprehensive and it offers a bit of additional information to keep you on track. For example, a little roundabout symbol indicates the correct exit to take, while a lane change and fork diagram helps when navigating motorways.

The unit proved faultless during a 300-mile round trip and I only missed a turning once, due to the fact that I was enjoying some free-flowing roads a little too much and forgot to look down at the little screen.

“The app is beautifully simple. Its home screen consists of just two fields”

That’s arguably the biggest bugbear, especially as I couldn’t mount the Beeline Moto in my natural field of vision. A lack of vocal prompts and visual reminders means journeys with lots of directional changes will require a fair few screen checks, but it soon becomes second nature. 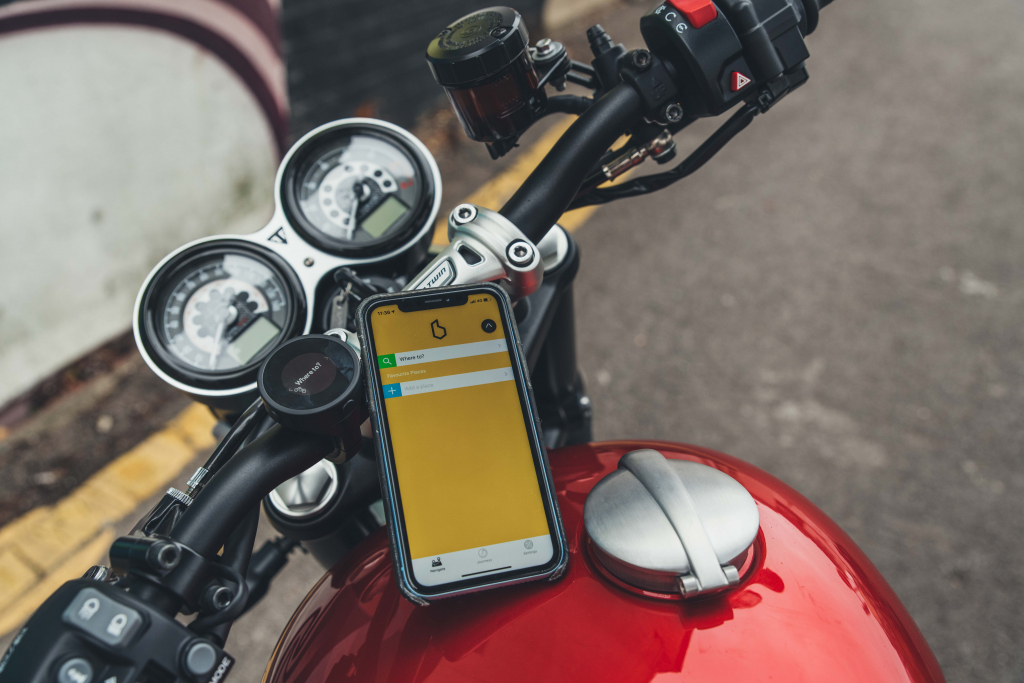 The unit itself boasts some 30 hours battery life and charges via a USB cable in around an hour, while its casing has received IP67 certification for water and dust proofing. It has also been lab-tested for shock resistance.

But its size is probably the most convenient feature here, as it couldn’t be easier to unclip it and shove it in a jacket pocket when parked up at a service station. In fact, I wouldn’t be surprised if many forget it is there and end up losing a unit to light-fingered bastards.

Henry Crew, the youngest person to circumnavigate the globe on a motorcycle, swears by his device and it is easy to see why. Other nav units are bulky and distracting, while strapping a smartphone to your bike’s handlebars is awkward and often foolish. 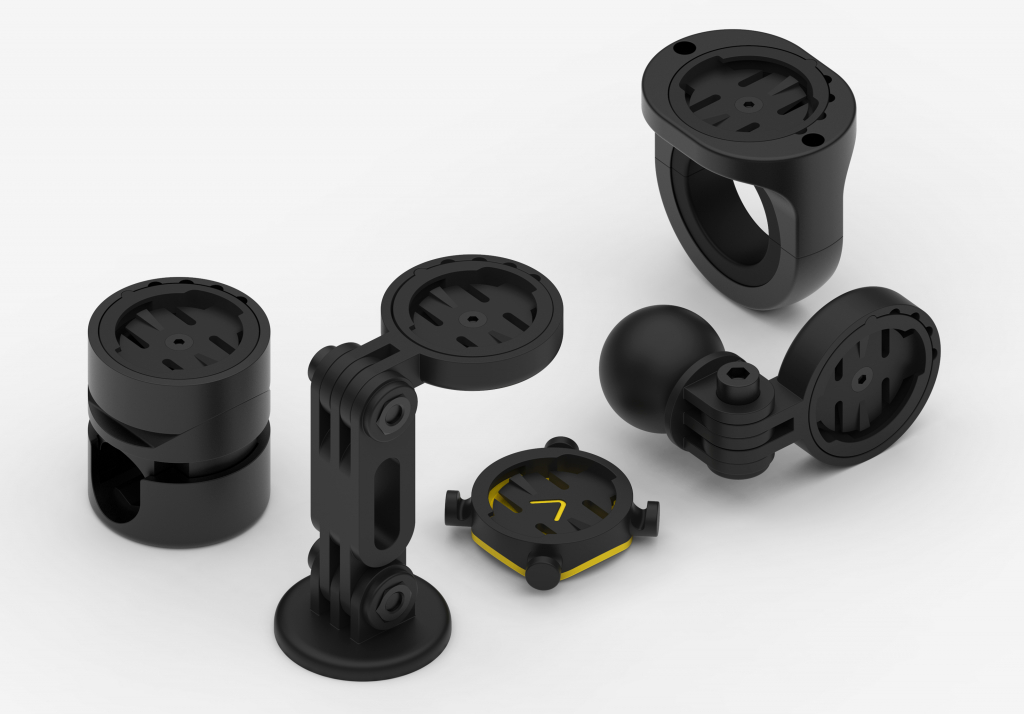 The Beeline’s battery life is brilliant and it allows you to keep a phone in your pocket. Should that device die, you may have to resort back to good old written directions, but a bit of GPS data consumes far less battery than full, screen-on navigation, meaning most smartphones should be good for a full day of riding. And who doesn’t travel without a smartphone charging cable these days?

Going back to basics is sometimes what’s needed to shake things up and it feels like Beeline Moto has done just that for the motorcycle GPS market. Yours for £149, it feels like a bargain buy and a must-have for any two-wheeled adventurer.

It's an ultra-stylish urban backpack, not a canister for carrying fuel

The smartphone that’s as rugged as the iconic off-roader