Honda CT125: a scooter for Armageddon

Honda CT125: a scooter for Armageddon

Obviously the world is confused at the moment, nobody really knows what’s going on and we are all sitting tight waiting for all of this shit to blow over. With seemingly perfect timing, Honda has announced it will put its into production an off road, go-anywhere version of the C125 -say hello to the macho Honda CT125.

With its ability to achieve a claimed 190 miles per gallon – or 172mpg with a pillion – the 1.165 gallon tank promises a range of 221 miles, making it perfect if the fuel stations eventually close or you have to do a spot of zombie-bashing on the next supermarket run. 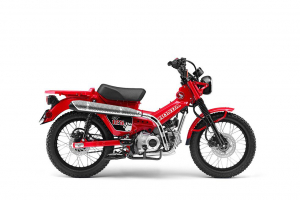 We first saw the CT125 as a concept at the Tokyo Motor Show last year and it appeared to unite everyone. Journalists, avid riders and almost everyone on our social channels all agreed that they could see themselves smashing some trails and covering vast distances on this little ripper.

The bike itself shares the same engine as the C125 Super Cub. However, Honda has reduced the power from 9.5hp to 8.7hp. We would assume that is in pursuit of improved fuel economy and the impressive amount of distance it can cover between fuel stops. The torque has been increased to an eye-watering 10Nm ,which can be found lower down the rev range. This thing won’t be doing power wheelies any time soon, but bumbling up a gravel driveway shouldn’t be an issue. 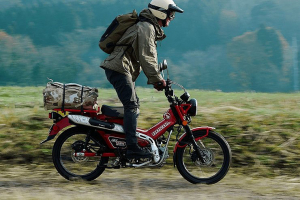 Online response suggests this bike will be an instant hit with the builder and customising community, too. With a modest predicted price of £3,700, the upcoming Honda CT125 could be an affordable daily commuter that could easily be turned into something worthy of a place on display at The Bike Shed Show.

Alas, Honda hasn’t confirmed the model will be coming to the UK yet, but fingers crossed it does and we can get our hands on one in the near future to give it a thorough Flat-Out going over. 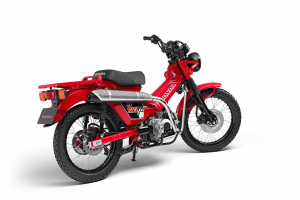