Alpine quickly leapt to to the top of our favourite manufacturers list when it unleashed the awesome A110 a couple of years back. Here is a car that never fails to raise a smile, despite its lack of grunt in this age of ever-increasing turbos and willy-waving horsepower battles.

Another factor we adore is the fact Alpine’s lineage is evident in the new model and everyone that worked on the project is genuinely passionate about the French marque’s history and racing pedigree. So the thought of bastardising such beauty with mild SUV modification is enough to send panic ripping through our office space. That is until we saw the images of Alpine’s madcap A110 SportsX design study and fell madly in love with the ice cold stunner. 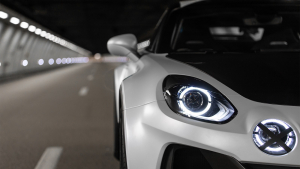 With its 80mm wider body and 60mm additional ground clearance, the A110 SportsX looks as if it was born to shred some snowy landscapes and cause slidey havoc on piste. According to Alpine, this styling exercise is inspired by the rally versions of the A110, more specifically from the winning A110 of the 1973 Monte Carlo Rally fame. o really, it is just any A110 with some beefy mods and some skis stuck to the back. But what’s not to like?

“If you own an Alpine A110 and need a little inspiration for next year’s GP Ice Race event, look no further”

Unfortunately, Alpine isn’t going to be offering these additional items at dealer level, nor is it planning on putting the car into production. It’s just another one of those annoying things car makers do. A sort of look at what you could’ve won moment. 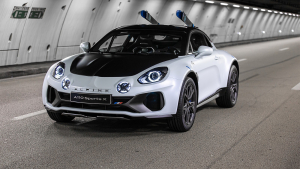 Still, if you do own an Alpine A110 and need a little inspiration for next year’s GP Ice Race event, then look no further. If you don’t own one, go and buy one now.