The climb cranks up to 15 per cent, I flick the gear lever and search for a smaller cog to spin but I’ve reached the limitations of my Shimano 105 groupset.

Gale force winds are making the incline even harder and every gust takes what little breath that’s left in these lungs. 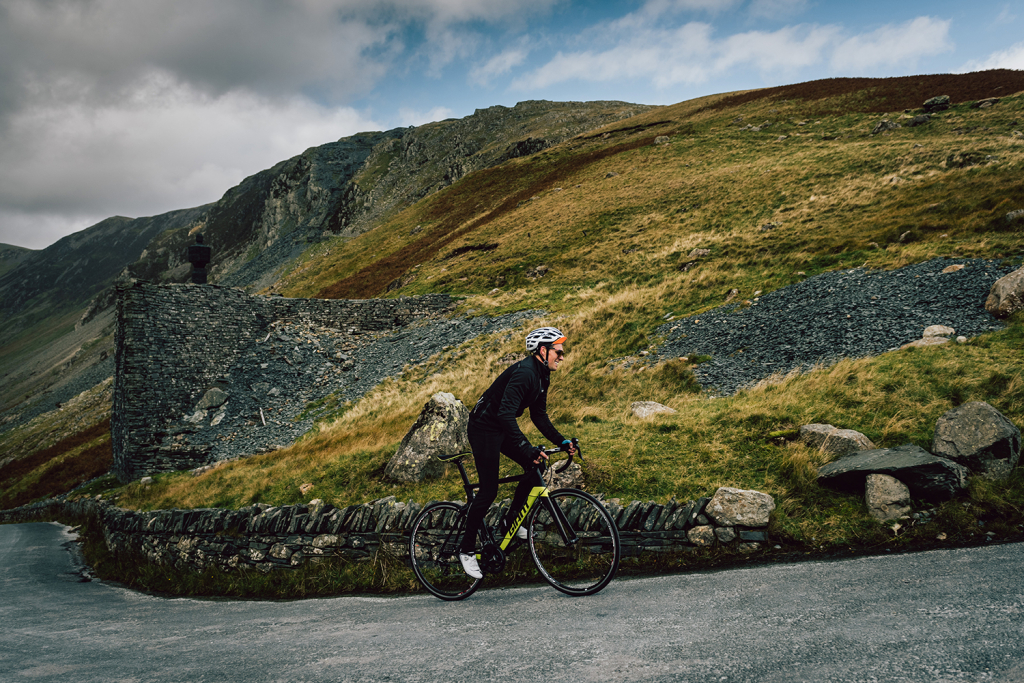 As 15 per cent becomes 20 percent, and 20 per cent soon turns into 25 per cent, the only thing I can think about is the number of eggs I ate for breakfast.

“Despite the inclement weather, Cumbria has cemented itself as a road cyclist’s dream”

Suddenly, chowing down on a Full English before tackling one of the UK’s premiere climbs doesn’t seem like a good idea. 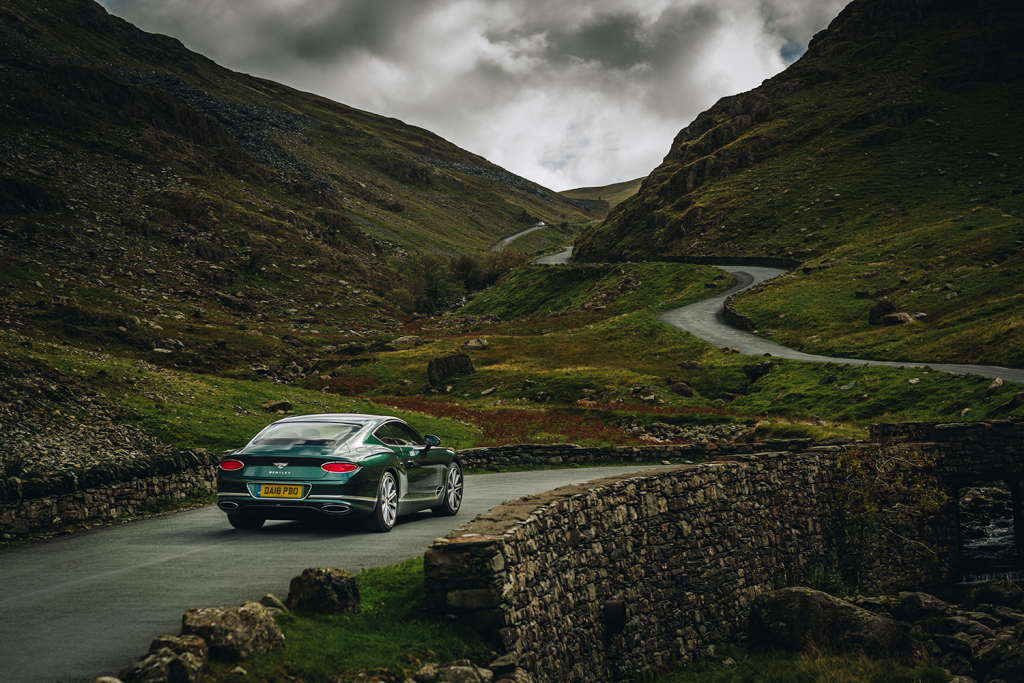 Cumbria and the many peaks and valleys of the Lake District National Park have long acted as the battleground for numerous Tours of Britain and other big name road cycling events, while masochistic two-wheeled fanatics have graced the region in search of a challenge since the invention of the bicycle.

But The Lakes are not only perfect for those wanting to let off some steam in Lycra (something I will go on to regret) they also boast a network of roads that will plaster a grin on the face of even the most ardent petrolheads. 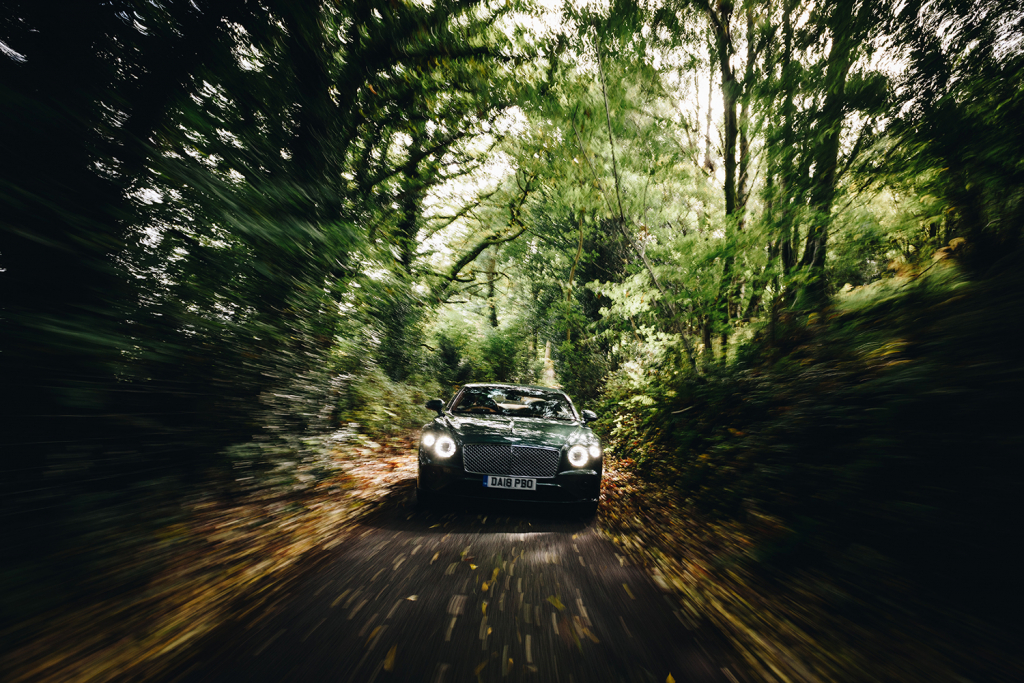 And for this trip, we somehow managed to shoehorn a carbon fibre bicycle into the rear of Bentley’s latest and massively overhauled Continental GT.

“It is arguably what inspired Wordsworth, Ruskin, Potter and numerous other literary legends that hail from the area”

The £160,000 grand tourer is arguably now more curvaceous and beautiful than ever before, while the ride, the interior and on-board tech have been elevated to the next level. 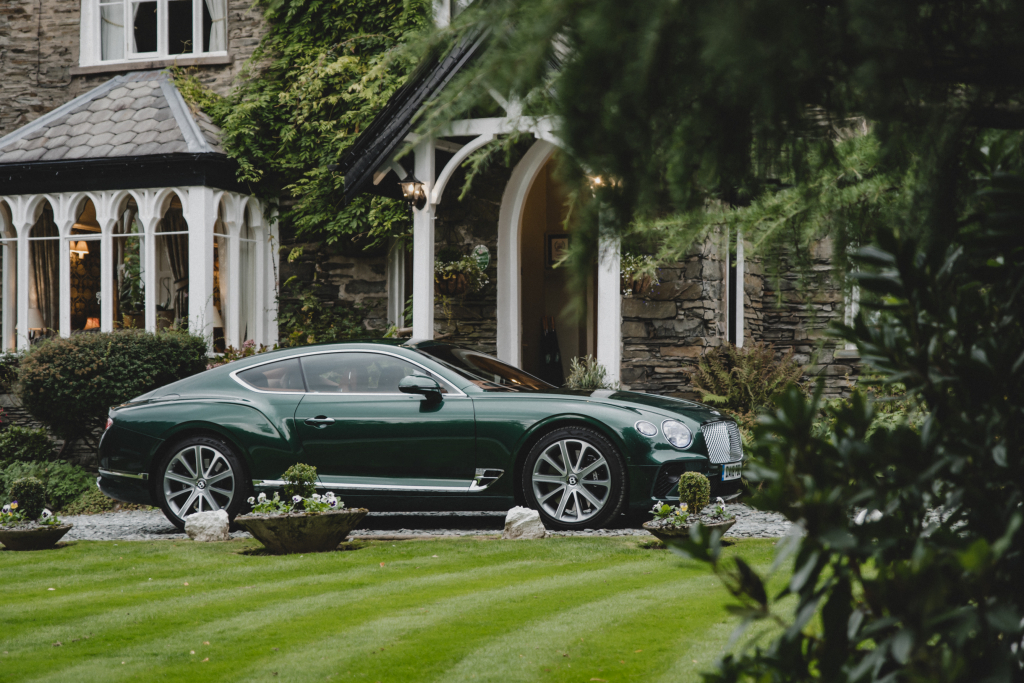 It’s in the best shape of it’s life, which is more than can be said for the blowing idiot on the bicycle.

If you could turn the clocks back a few hour before we had a mild heart attack on the side of a Cumbrian mountain, you’d find us sweating profusely over the prospect of fitting a modern road bike inside Bentley’s sumptuous Continental GT.

Unless you want to fit a tow bar to the rear of this striking machine or sucker some flimsy pads to the roof, there isn’t much out there in the way of a rack or cycle carrier that caters for a £160,000 continent-crosser, so we were forced to take the bicycle apart and load the individual pieces into the boot. 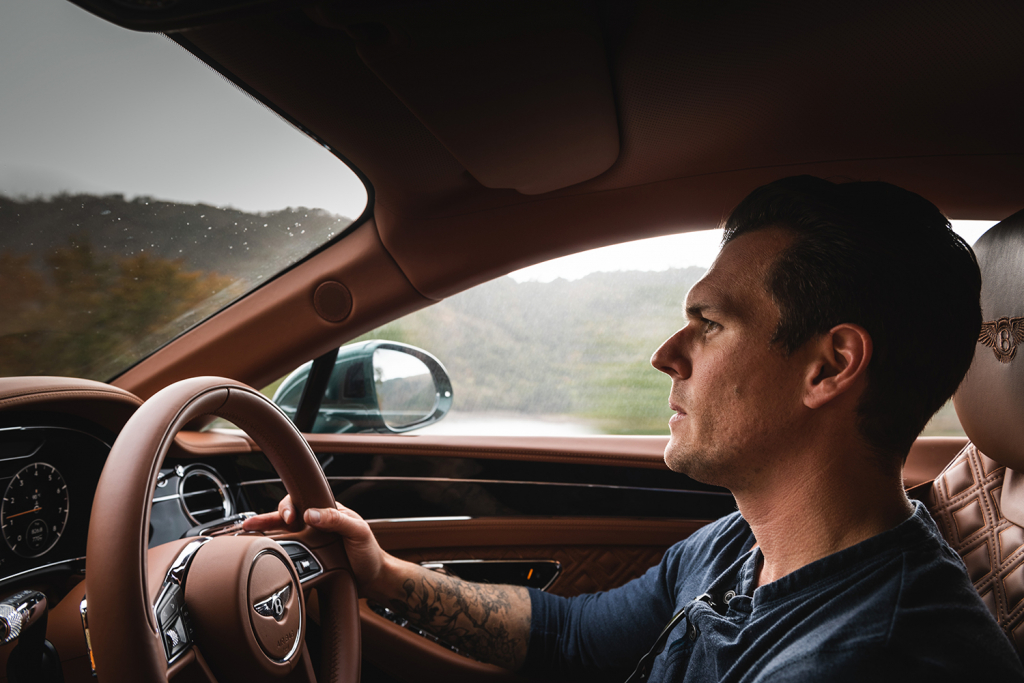 Surprisingly, a Giant bike, camera gear and an overnight bag will happily sit in the luggage compartment of the big Bentley, while the cosseting interior still boasts enough space for four people.

But the luxury of a few chatty passengers was not one we would enjoy, as a long list of podcasts was dispatched of on the mind-numbingly boring hack from the south coast of the UK to the lush green peaks of the north east. 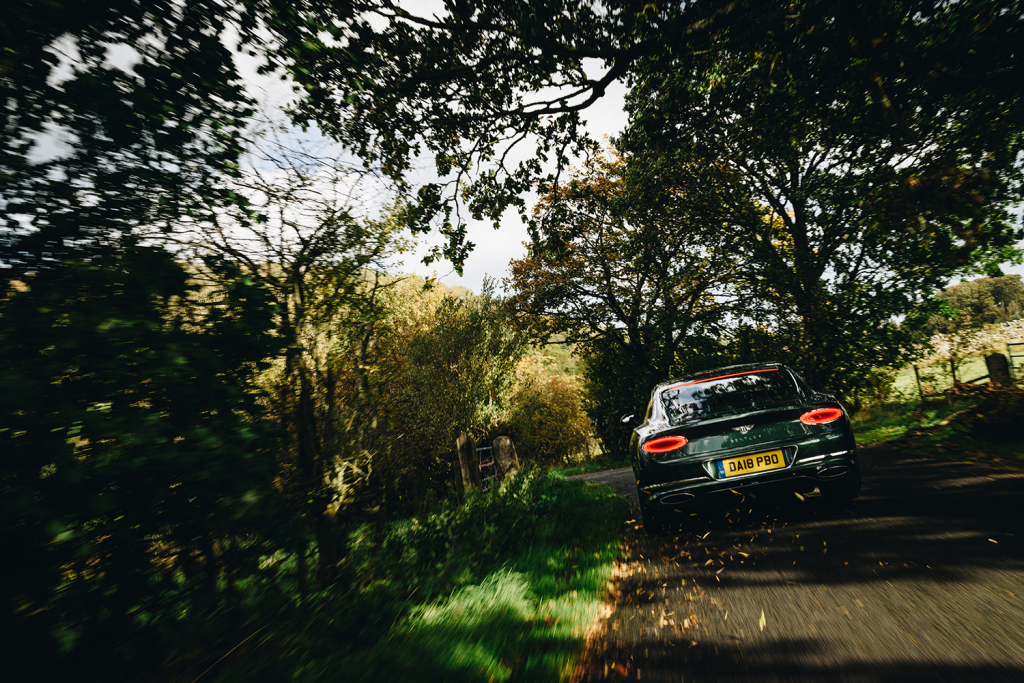 The M3, the M40 and the dreadful M6 all seem to merge into one long motorway blur of average speed checks, traffic jams and broken down lorries, but the Bentley – with its massaging seats, I should add – motors majestically.

Thankfully, and after some five hours behind the wheel, the M6 makes way for the A591 and immediately the vistas become more enticing, with views across lake Windermere some of the most staggering we’ve seen in a long time. A voice from the Bentley’s sat nav explains that my final destination is only a few yards ahead and the striking flint and slate fascia of the Cedar Manor Hotel springs into view.

“With a few morning light beauty shots of the Bentley in the bag, we make a beeline for the A592 and the beautifully ribboning tarmac of the Kirkstone Pass”

It’s a welcome site and despite the late arrival, the owners of this Victorian establishment are on hand to ensure the Verdant Green Bentley is parked just in front of the perfectly pruned lawns. This would be the first of the many impromptu photo sessions requested by strangers. 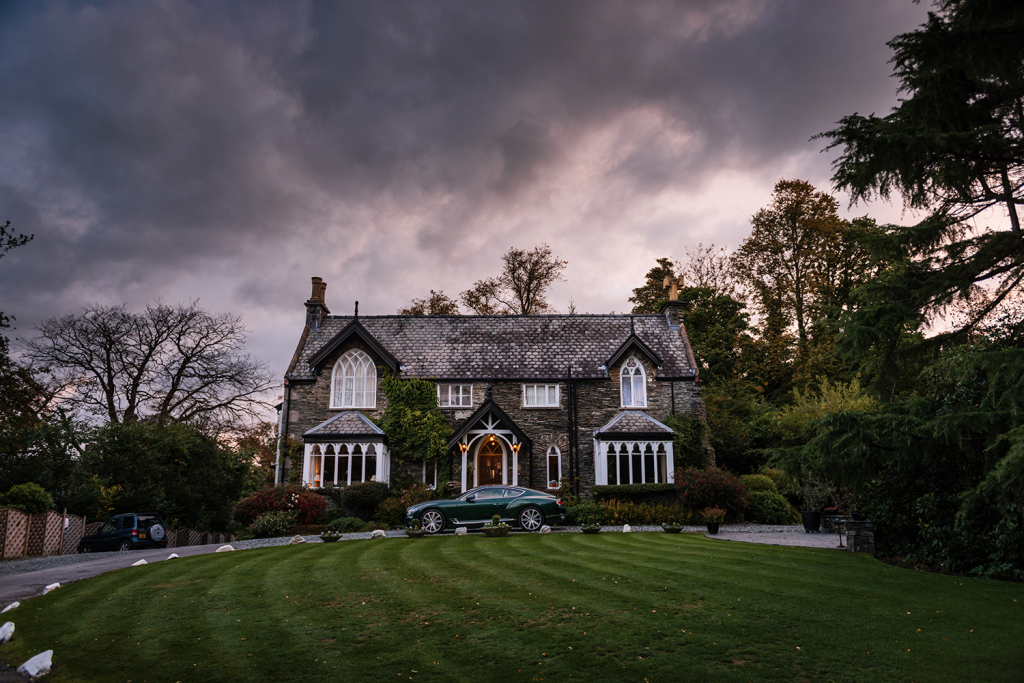 There is some research that suggests cyclists that tackle the Tour de France consume a ridiculous number of calories per stage, so fuzzy logic would lead to the choice of a delicious late dinner of local lamb, root vegetables and lentils, followed by sticky toffee pudding and a couple of glasses of mouth-watering Malbec the night before tackling the infamous Honister Pass.

Rooms in Cedar Manor are spacious and comfortable, so sleep comes easy, while the breakfast plate is densely packed and satisfying. Chris Froome would probably do the same, wouldn’t he? 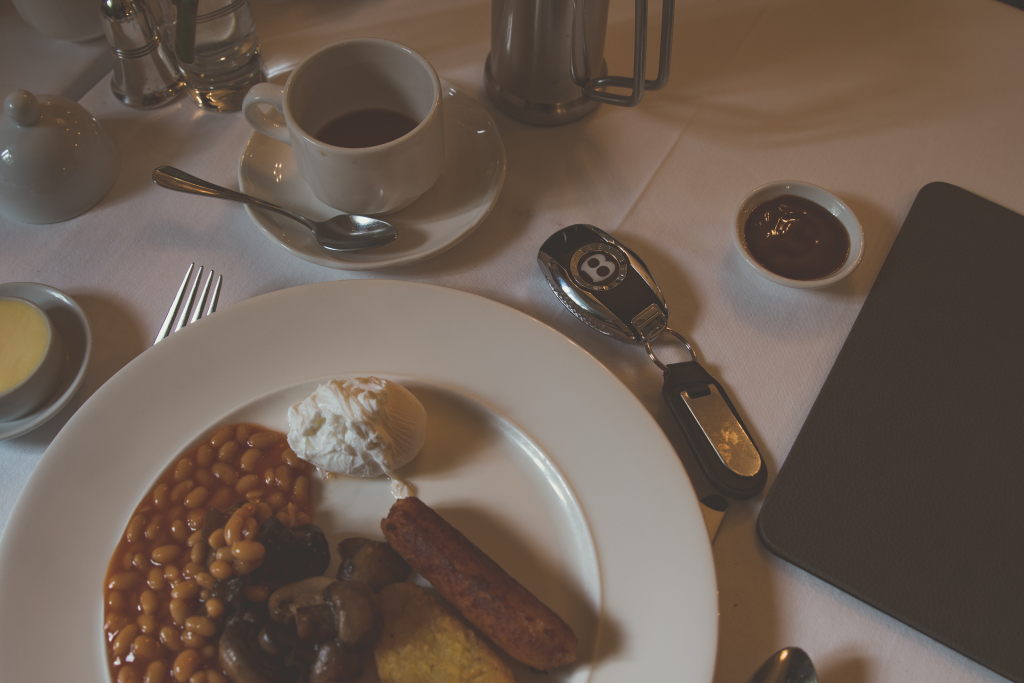 With a few morning light beauty shots of the Bentley in the bag, we make a beeline for the A592 and the beautifully ribboning tarmac of the Kirkstone Pass.

“Cresting the summit is bliss and we race past the slate mine car park and enjoy a snaking, speedy run down towards Seatoller and Borrowdale”

The roads are narrow and technical, particularly when piloting the large frame and 6.0-litre W12 engine of the Bentley, but the views of Red Screes, Stony Cove Pike, Place Fell and the gently rippling surface of Ullswater make any white-knuckle moments worth it. 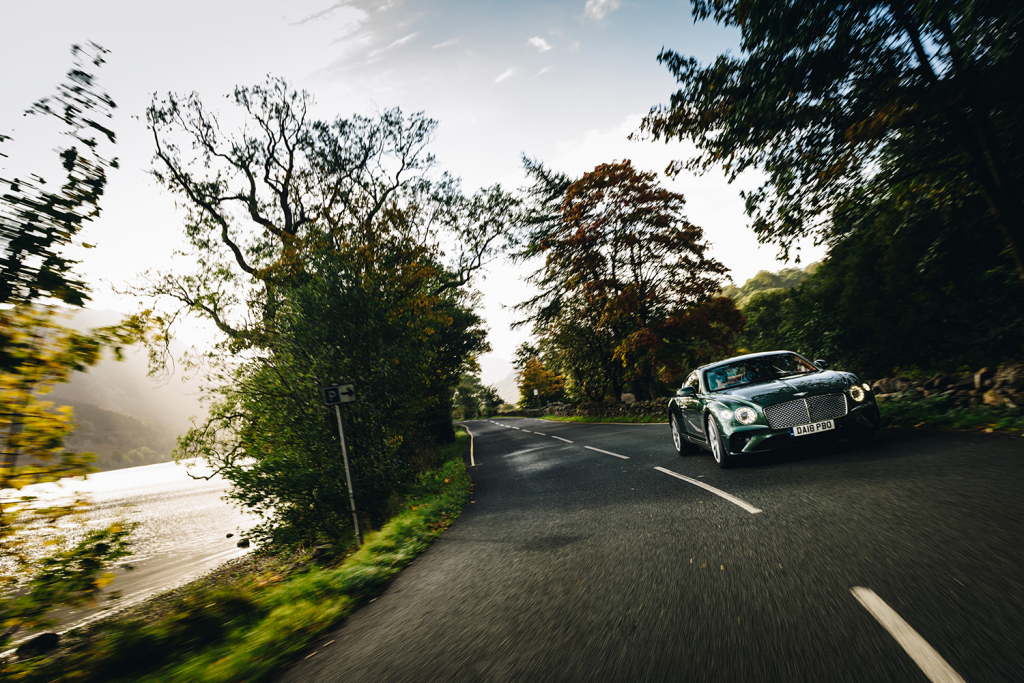 A twisting route takes us through the picturesque town of Pooley Bridge and on to A66 through Keswick, Braithwaite and on to the stunning sights of Bassenthwaite Lake and its surrounding nature reserve.

The drive is fantastic, with very little traffic getting in the way of good times, and the roads only get more breath-taking as we loop around Grasmoor and Grisedale Pike. 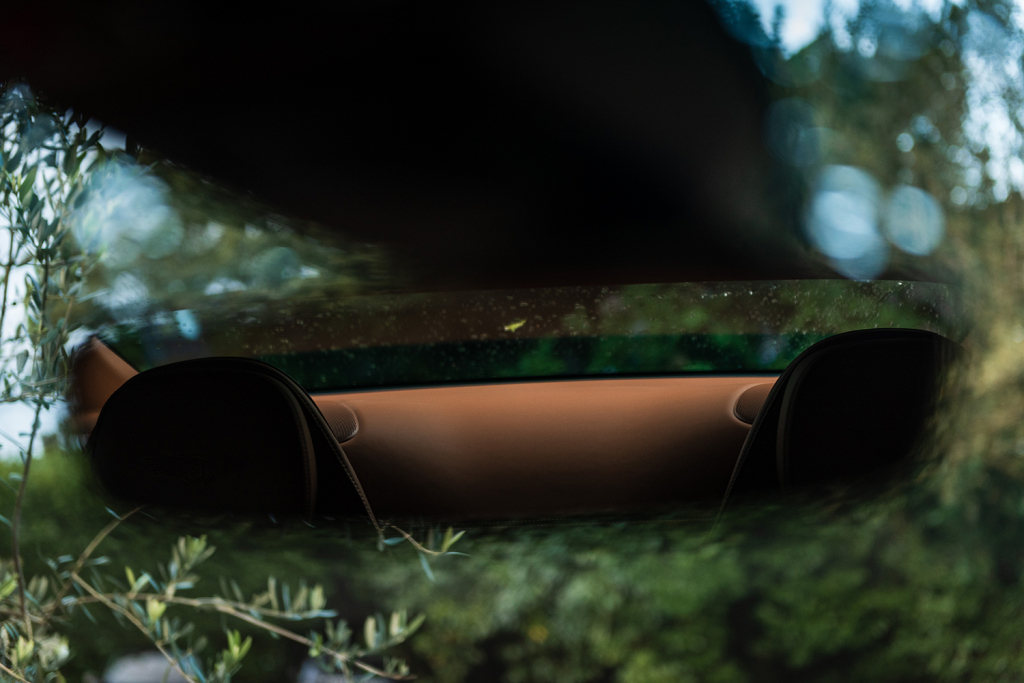 But horsepower must make way for pedal power and we soon arrive at the car park of the Honister Slate Mine, which hovers tantalisingly towards the end of a painful uphill struggle afforded by the Honister Pass.

The bicycle is pieced back together as the gale force winds threaten to blow the spindly carbon frame down a nearby hillside. It’s cold and the biting breeze freezes fingers and makes it tricky to wrestle with the torque wrench. 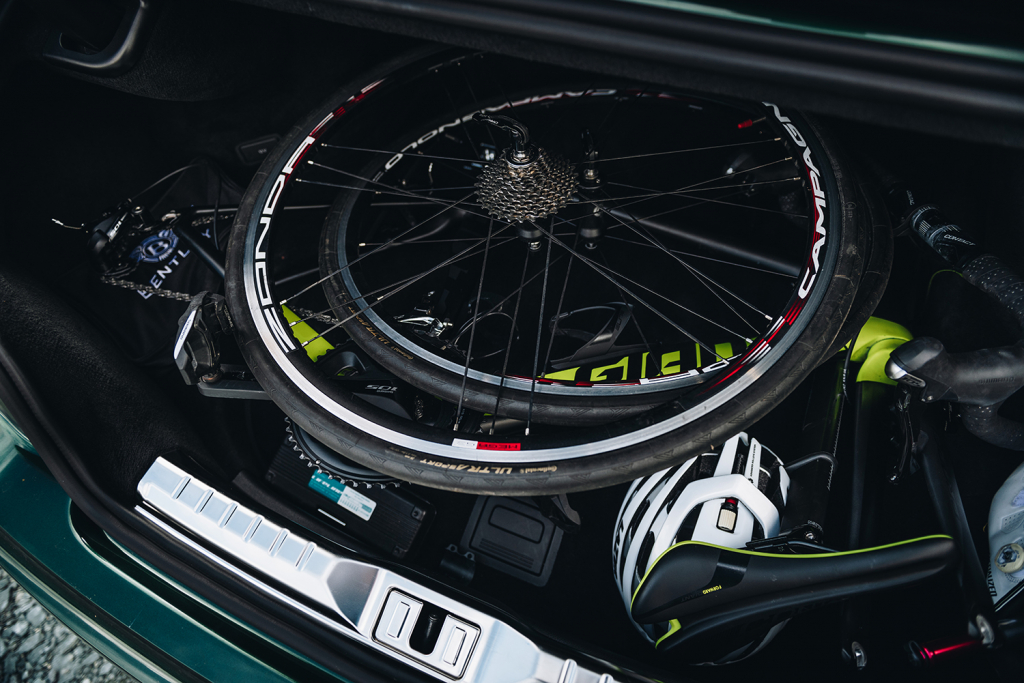 The plan is to turn right out of the car park, which involves a few metres of 20 per cent gradient before warming up the legs with a breeze down towards Buttermere.

There is a 20-mile beautiful loop that runs to Stair, Manesty, Grange and Rothswaite before meeting the Honister from its uglier, craggier and decidedly more lung-busting easterly side, but the weather is dreadful. Gusting winds and painful 15 per cent gradient climbs around Stair and Manesty would make the ride long and unenjoyably treacherous, so the decision is made to flip the bike around at Buttermere and attack Honister from West to East.

It’s a deceptive cruise for the first few metres but soon cranks up to gut-busting inclines. The legs spin and the large breakfast threatens to make an appearance. Out of shape, full of eggs and the wind is making it difficult to catch a breath. 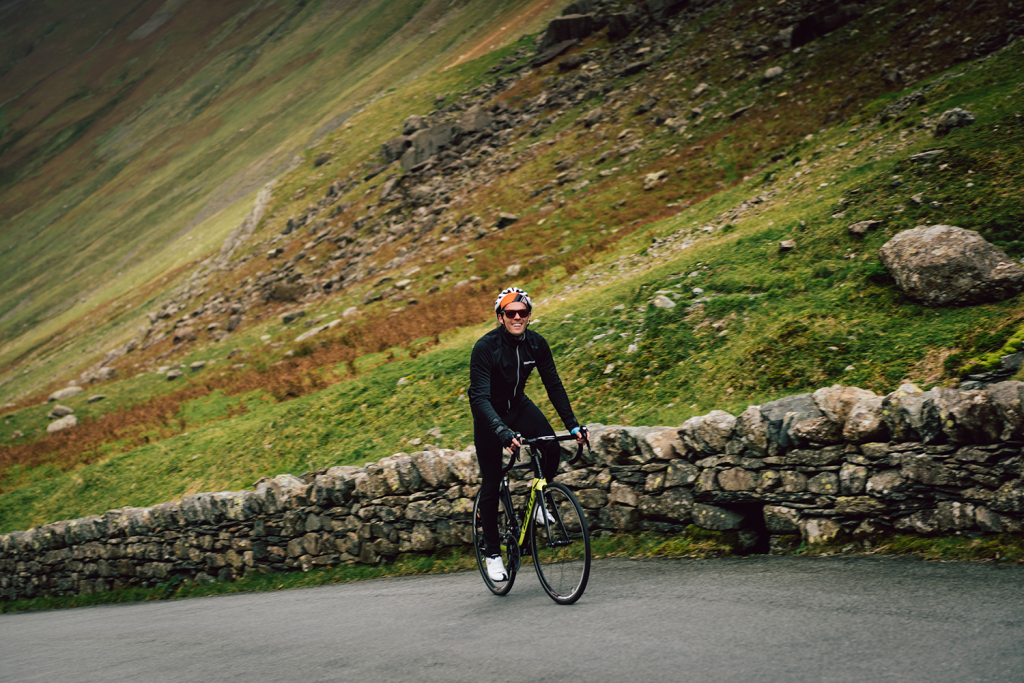 Things only get steeper as the gorgeous valley closes in on all sides, with enormous boulders lining the roadside and making the experience even more daunting.

Cresting the summit is bliss and we race past the slate mine car park and enjoy a snaking, speedy run down towards Seatoller and Borrowdale. 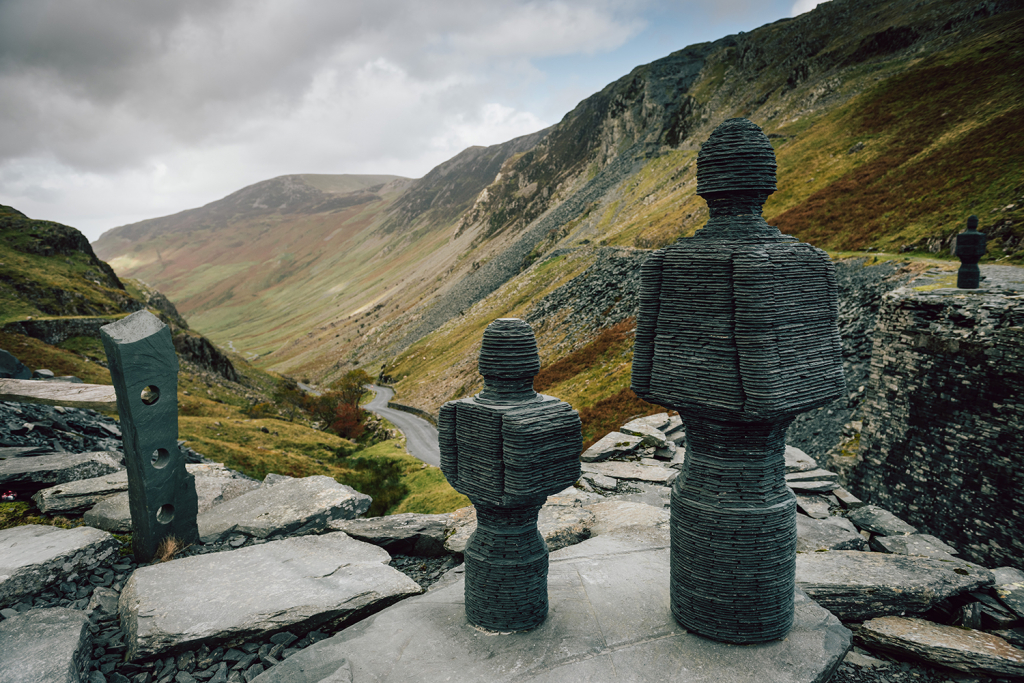 But the Bentley is parked back up the Pass, so the only thing to do is chug down some energy drink, let the heart rate settle and tackle the climb again for the beastly easterly side.

It’s even more difficult, despite a blustery tail wind giving me an invisible hand up the 25 per cent gradient sections, but it’s a staggeringly scenic ride and just a couple of hours in the saddle feels rewarding enough. 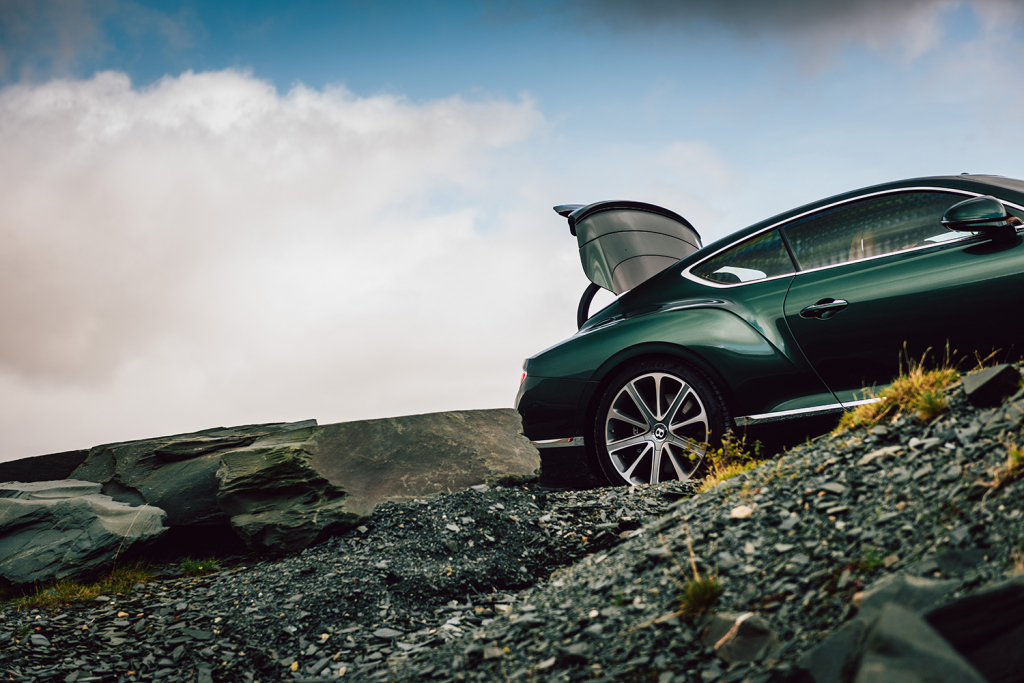 Escape to the Lakes

After a brief stop for fuel – required for both rider and vehicle (the latter is a thirsty beast) – we speed back to base at the foot of Lake Windermere to catch the final hours of some beautiful light.

That’s the thing with the Lake District, it can be raging a storm at the peak of one of the many Heads and Pikes, but the sun can suddenly burst through the clouds and cover the lakes in beautifully soft light. 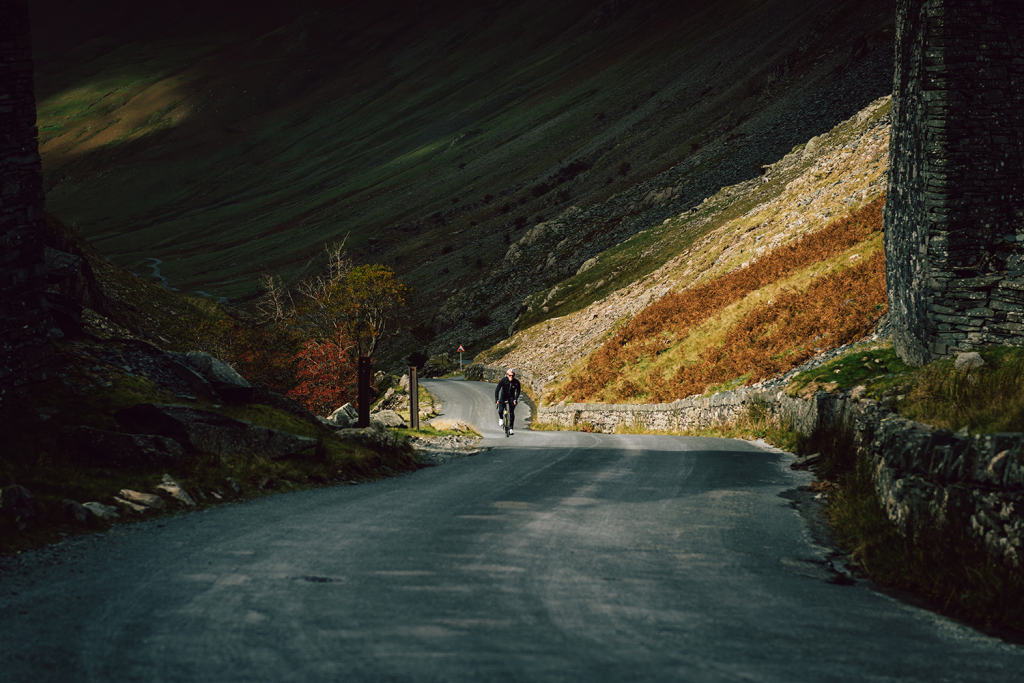 It is arguably what inspired Wordsworth, Ruskin, Potter and numerous other literary legends that hail from the area. Just a short hike around the shores of Windermere is enough to get the creative synapses firing.

As the sun dips behind the craggy mountainsides, the evening is spent discovering what Windermere has to offer in terms of eateries, and although not overflowing with options, we do stumble across The Crafty Baa, which is arguably the quirkiest pub in the area. 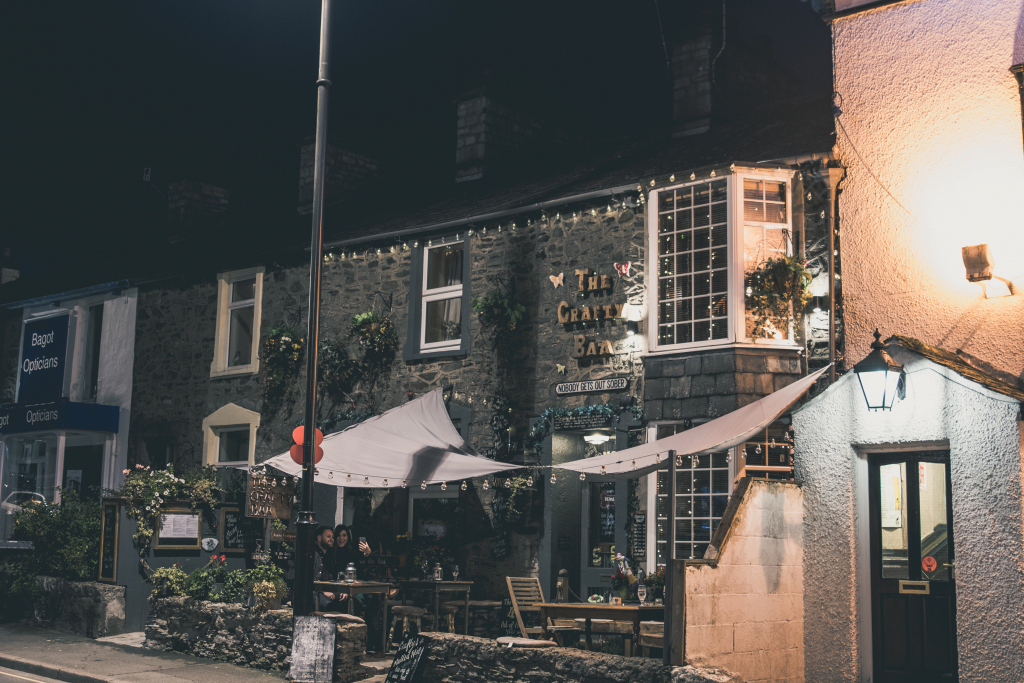 There’s a superb craft beer and cider selection on offer, the homemade sandwiches and snack boards are gigantic and the atmosphere is super chilled. It’s a great way to load up on calories after a long day spent burning them.

With weary legs, we begin the walk back to the hotel in anticipation of an early start and another long but excellent drive behind the wheel of the potent Bentley. 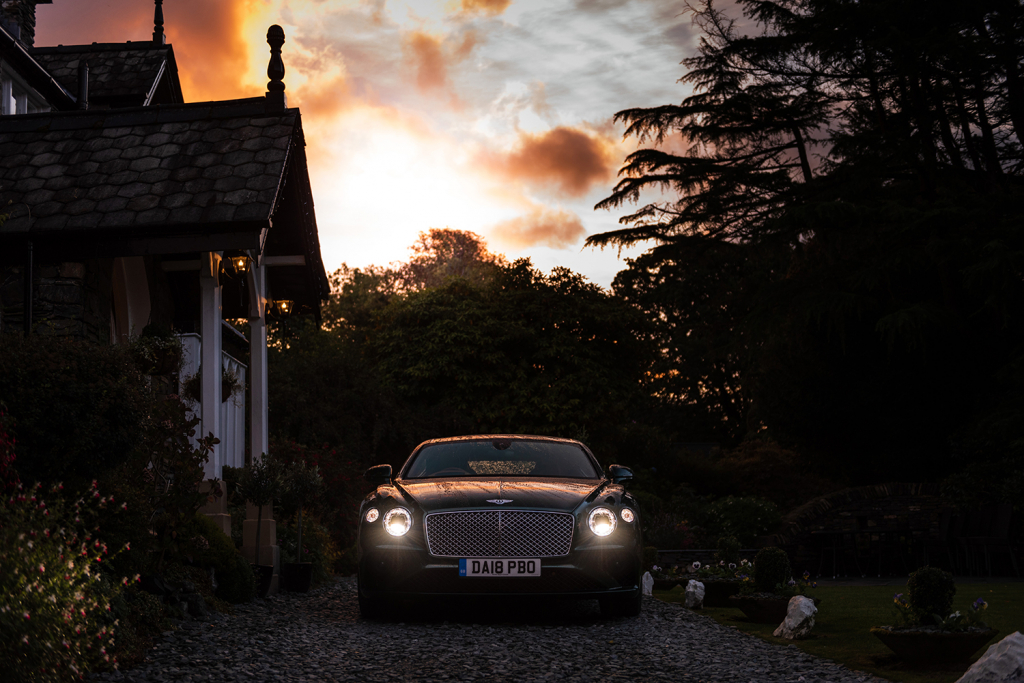 Despite the inclement weather, Cumbria has cemented itself as a road cyclist’s dream, with the numerous thigh-shattering climbs and retina-singeing scenery just begging for a return visit.

And if you just so happen to be behind the wheel of a British sports car, the trip will be even more fulfilling.

This article was originally written for Amuse. Many thanks to David Rutter for the photography and Jordan Pryce for his assistance on the day.