After nearly four hours sailing through a seemingly infinite sea mist, we’ve just set our eyes back on Norwegian soil. Through the evening gloom, a scattering of monstrous, craggy mountains begin to rise out of the icy waters around us as our Hurtigruten cruiser slows to a gentle glide.

Having started the day in Bodø (where the dull skies and damp roads proved distinctly un-wintery) our journey to 68.13 degrees North has brought a stereotypically frosty welcome.

“Our camper van convoy begins to roll into the Nordic darkness”

Our relief at encountering authentically Arctic conditions is soon replaced with a large dose of apprehension. As MS Nordlys docks up, bathed in the yellow sodium glow of the harbour lights, it suddenly dawns on us that we’re about to switch cruise liner for camper van.

In a world painted white and sealed near-solid by sub-zero temperatures, taking to the Tarmac doesn’t seem like such a grand idea (especially as, back at home, us Brits are regularly brought to our knees by even the lightest dusting of powder).

Luckily our chariot for this epic 515km road trip through spectacular Arctic Circle scenery comes with four-wheel drive. However, it certainly isn’t your usual Scandinavian-spec SUV. 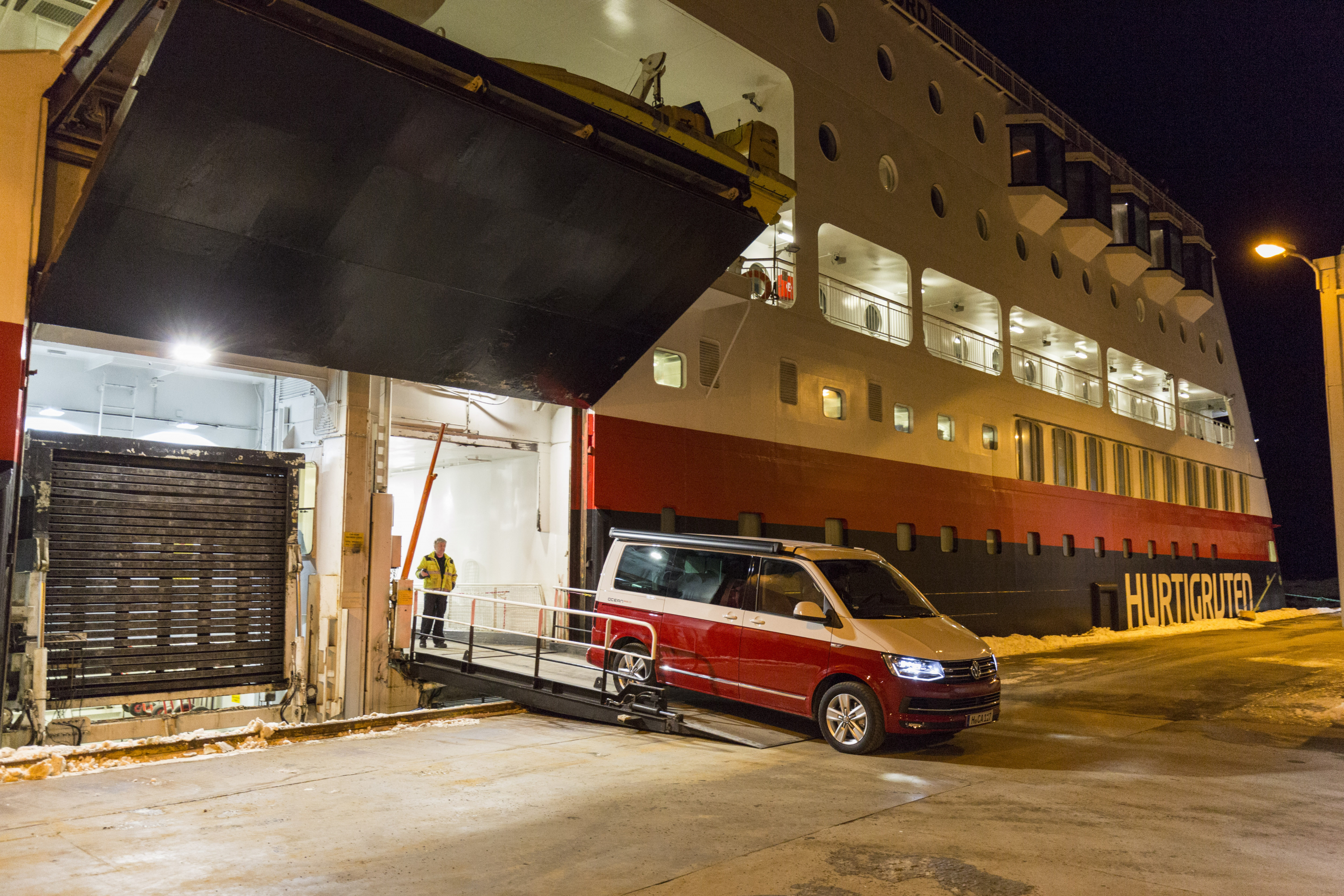 Rolling out of the ferry is a fleet of brand new Volkswagen California Oceans, V-Dub’s latest, all-singing, all-dancing camper van.

To cope with the extreme conditions we’re expecting to encounter over the next two-and-a-half days, each van is equipped with the optional ‘4Motion’ all-wheel drive system as well as a set of heavily-studded winter tyres.

This obviously isn’t going to be your usual camping trip. But then did we really expect that when heading out to the Arctic Circle’s Norwegian sector in mid-March?

HOW TO GET HERE

From the UK, fly out of London Heathrow to Oslo with Scandinavian Airlines before catching a connecting flight to Bodø. After a total of just over three-and-a-half hours in the air, the capital of the British Isles gives way to one of the largest settlements inside the Arctic Circle. 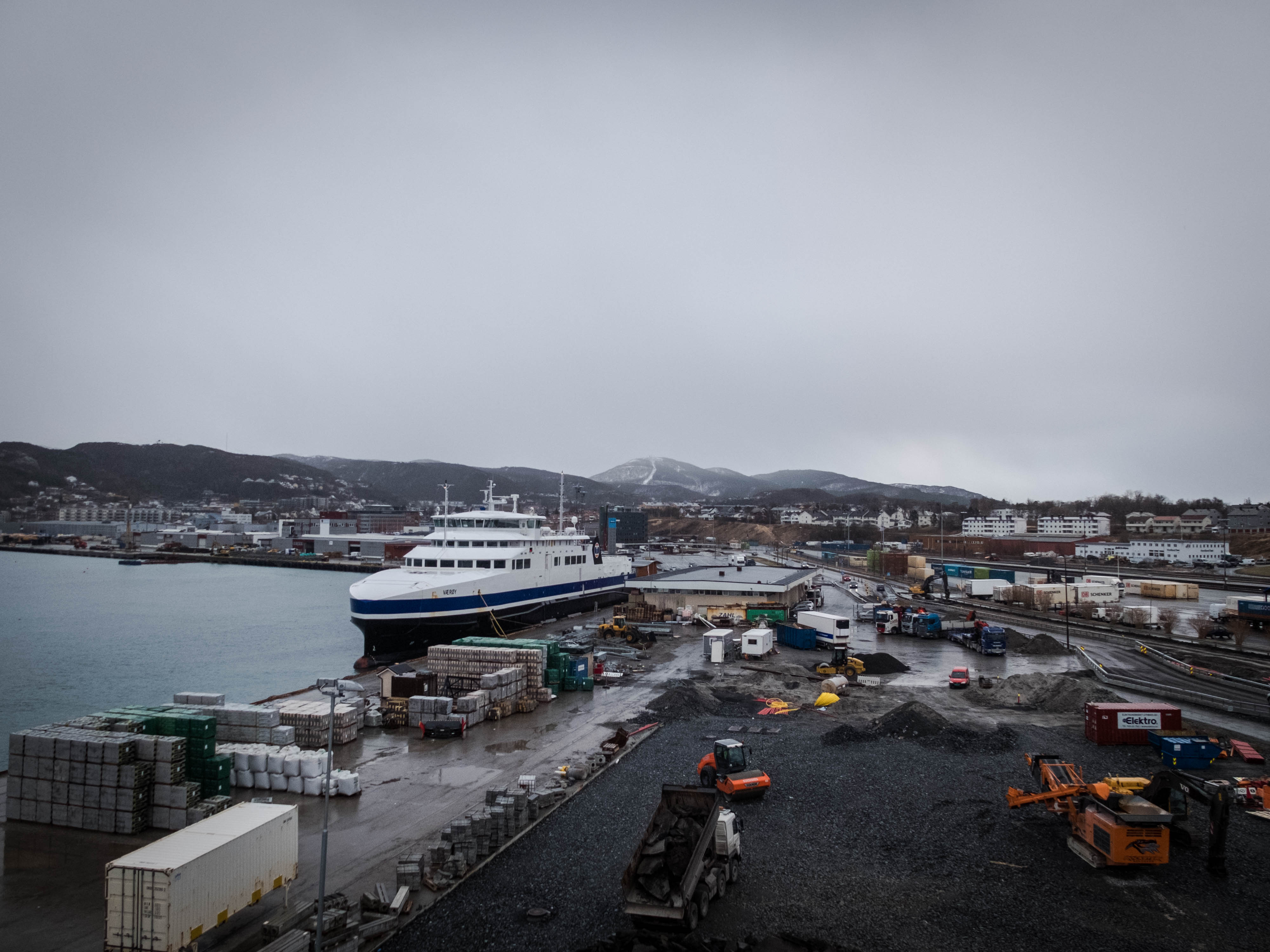 From Bodø, there are a number of daily ferry crossings to Lofoten, with most of the journeys taking around four hours (depending on sailing conditions). We chose to take the crossing to Stamsund on one of Hurtigruten’s cruise liners. Providing a slightly more luxurious sea-faring experience, the Norwegian company has been sailing ships up and down the Norwegian coast since 1893 (originally as a means of keeping contact with the country’s outermost posts alive). 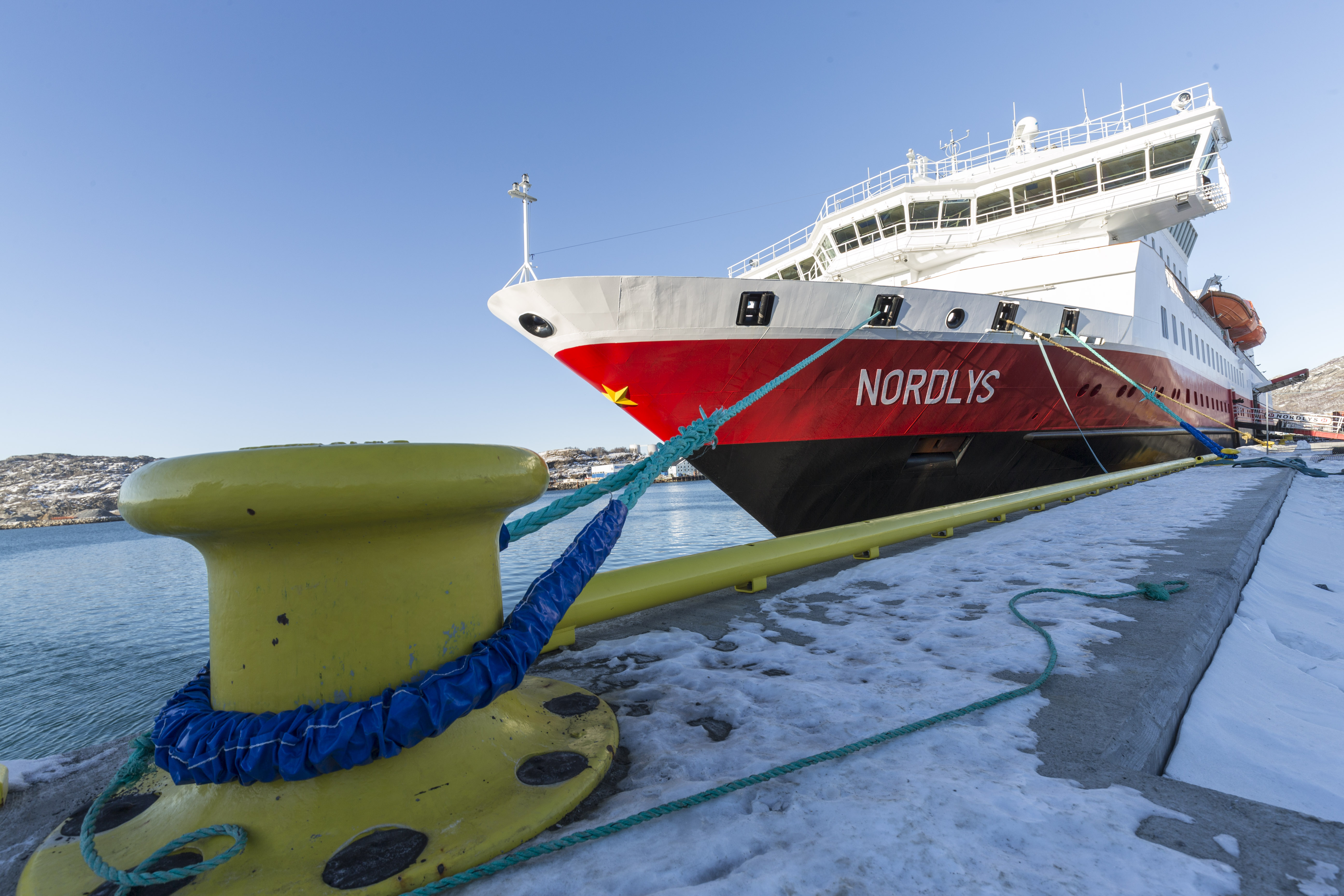 Today, Hurtigruten’s 11-strong fleet sails the coastline daily from Bergen to Kirkenes and back, providing regularly transit to 34 different ports. Onboard, the cruisers have an ample selection of restaurants, a gym and sauna (among other various facilities). Regular hiking excursions are run by the onboard team, allowing the more adventurous passengers to explore the Norwegian scenery on foot.

In true Flat-Out fashion, we’ve plumped for the 204hp 2.0-litre TSI version. The petrol-powered California (not available in the UK) may be the most powerful T6 generation camper but we’re hoping that the slight dearth of torque compared to the diesel offerings will stop the ESP light from flashing like the Blackpool illuminations.

Still wrapped in ski coat, Buff and beanie, there’s not much time to get acquainted with the idiosyncrasies of the Volkswagen California’s cockpit before our camper van convoy begins to roll into the Nordic darkness.

Luckily, for those regularly acquainted with VW interiors, everything feels pretty familiar, all the switch gear and buttons falling in the usual places.

What’s more, with four-wheel drive and studded rubber, the latest California Ocean is – in theory – a doddle to drive, despite hitting the scales at over three tonnes.

Such is the camper’s composure – combined with the relatively relaxed pace required by Norway’s 80kph national speed limit – that you could easily forget about the treacherous conditions underfoot (or should that be under tyre?)

While the VW is barely fazed by the environment, our first experience of Arctic helmsmanship is certainly going to leave a long-lasting impression.

Since leaving the southern coast of the Lofoten Islands behind us, a heavy wind has begun to whip the now-meaty snowflakes into a frozen frenzy.

In the vivid high beam of the LED headlights, the flurries glow phosphorescent and, above about 40kph, fine lines of snow streak towards the windscreen as if we’ve hit the hyperdrive button and entered light speed in the Millennium Falcon.

After taking the provincial ‘Steineveien’ road out of Stamsund, we briefly head west along the 815 to the town of Leknes where we pick up the main ‘European route’ E10.

The neon glow of the local petrol station grows and fades out the side window as we crunch across the ice through Leknes. The 50kph urban speed limit gives way to the national constraint once more and we leave behind the last remnants of major civilisation. The adventure into the unknown has well and truly begun.

Starting in the village of Å (yes, that really is its name), the E10 traverses across the entirety of the Lofoten peninsula (bar the very south-western tip) before crossing the border into Sweden and terminating in Lulea.

A large chunk of the E10’s Norwegian leg will provide us with the route for most of our Arctic road trip but, tonight, we’re only on it for a few kilometres as we make our way to a wild camping spot on Lofoten’s northern shores. 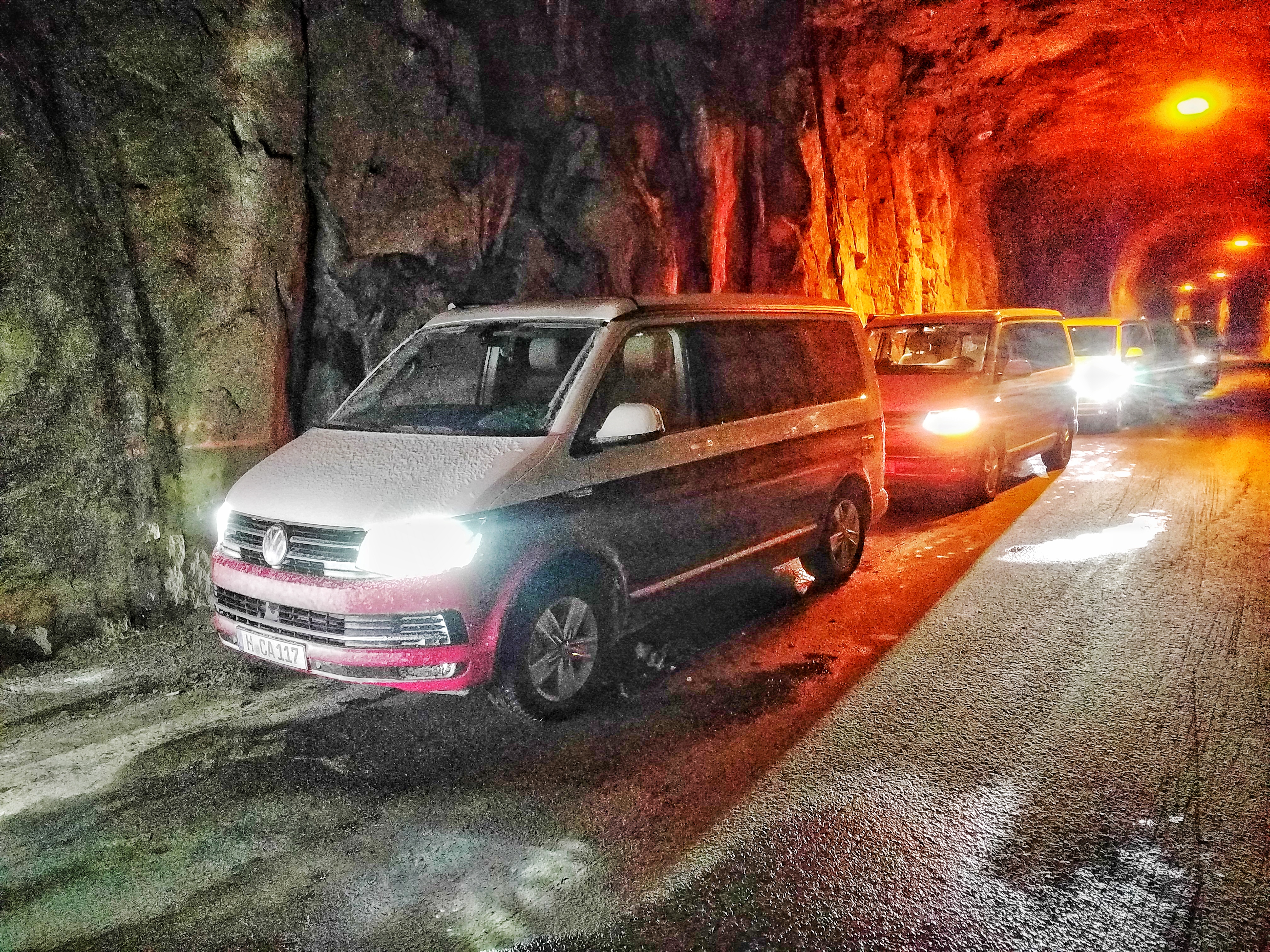 Hiding in a Norwegian tunnel.

With every kilometre covered, the wind is gathering in strength. In the pitch-black Nordic night, any form of scenery is ominously absent yet it’s still possible to tell when the mountains give way to more exposed ground.

As we round the south-eastern edge of the Farstadvatnet lake, a heavy gust hits the California broadside and threatens to blow us clean beyond the boundaries of the orange poles that mark the edge of the road and into a particularly deep snow drift.

Turning left onto Saupdstadveien a few kilometres later, what has (until now) been a relatively flat route suddenly takes a decidedly upward trajectory.

The gradient is never too severe though (not that it would faze the Volkswagen California’s 4Motion system if it was). Instead of climbing over the unseen mountains the road cuts straight through them in a series of dimly lit tunnels.

With the sat-nav telling us that we’re only a kilometre or so from our stopover in Unstad, it’s in one of these tunnels – clawed haphazardly through the rock – that we quickly seek shelter from the howling wind. 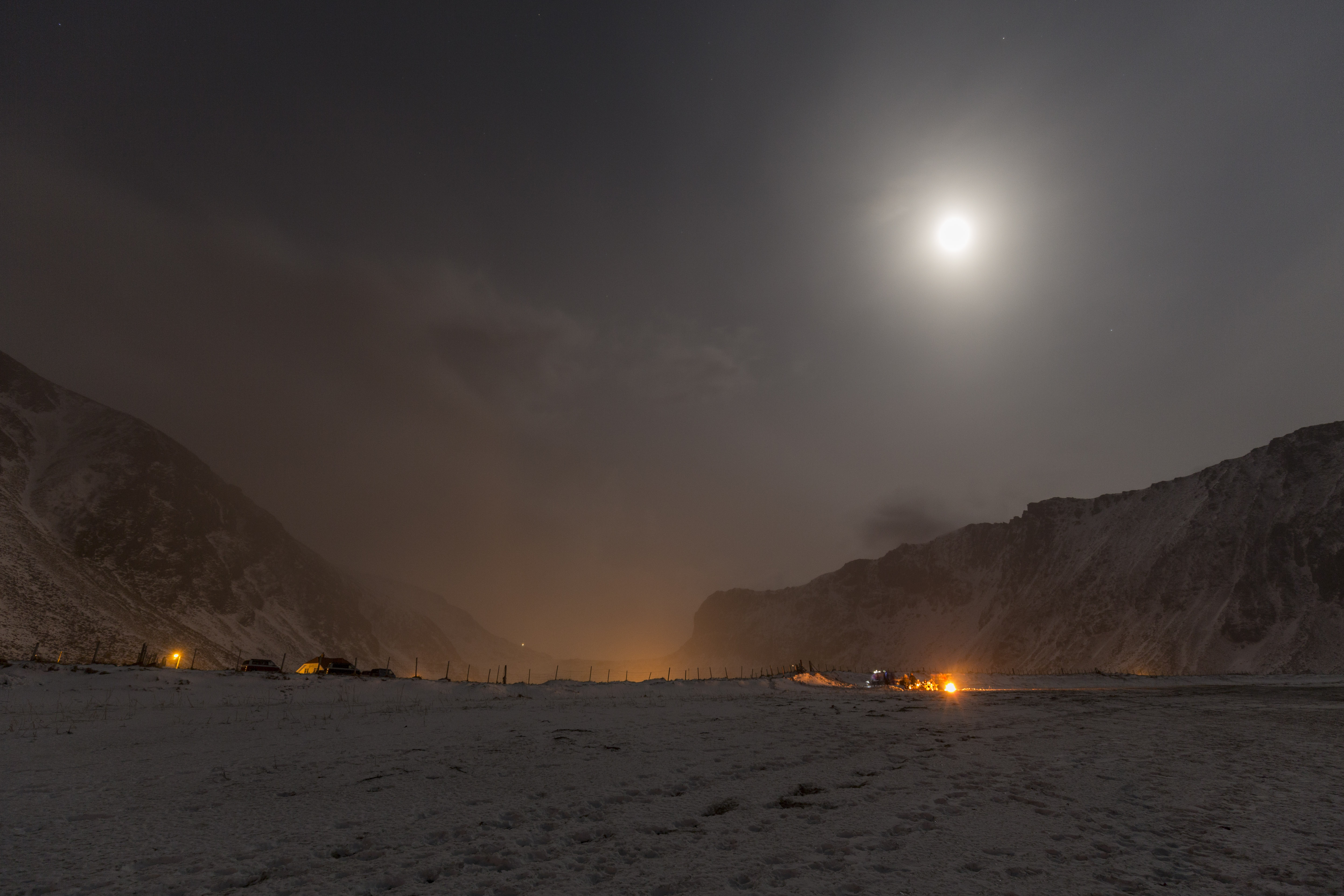 Converting the back end of the latest VW California into a double bed is only the work of a few moments but, for the uninitiated it’s easier to do it from the outside via the sliding side door.

Of course, with a 50mph wind sending the snow berserk, exposing the inside of the California to the elements would have swiftly turned our sleeping quarters into the automotive equivalent of a deep freeze chest, so our brief break in the tunnels confines makes a good amount of sense (even if it does draw a slightly bemused look from one of the locals who cruises past in the other direction).

Lift the right-hand lever. Slide the bench seat forward until it stops on its runners. Pull the fabric cord between the base and backrest. Flatten the bench. Fold over the foam mattress. Done.

With our bed all setup, we roll down the hill toward Unstad beach where we’re greeted with a well-earned Norwegian pilsner as chilled as the surround Lofoten landscape.

Heat of the Californian desert 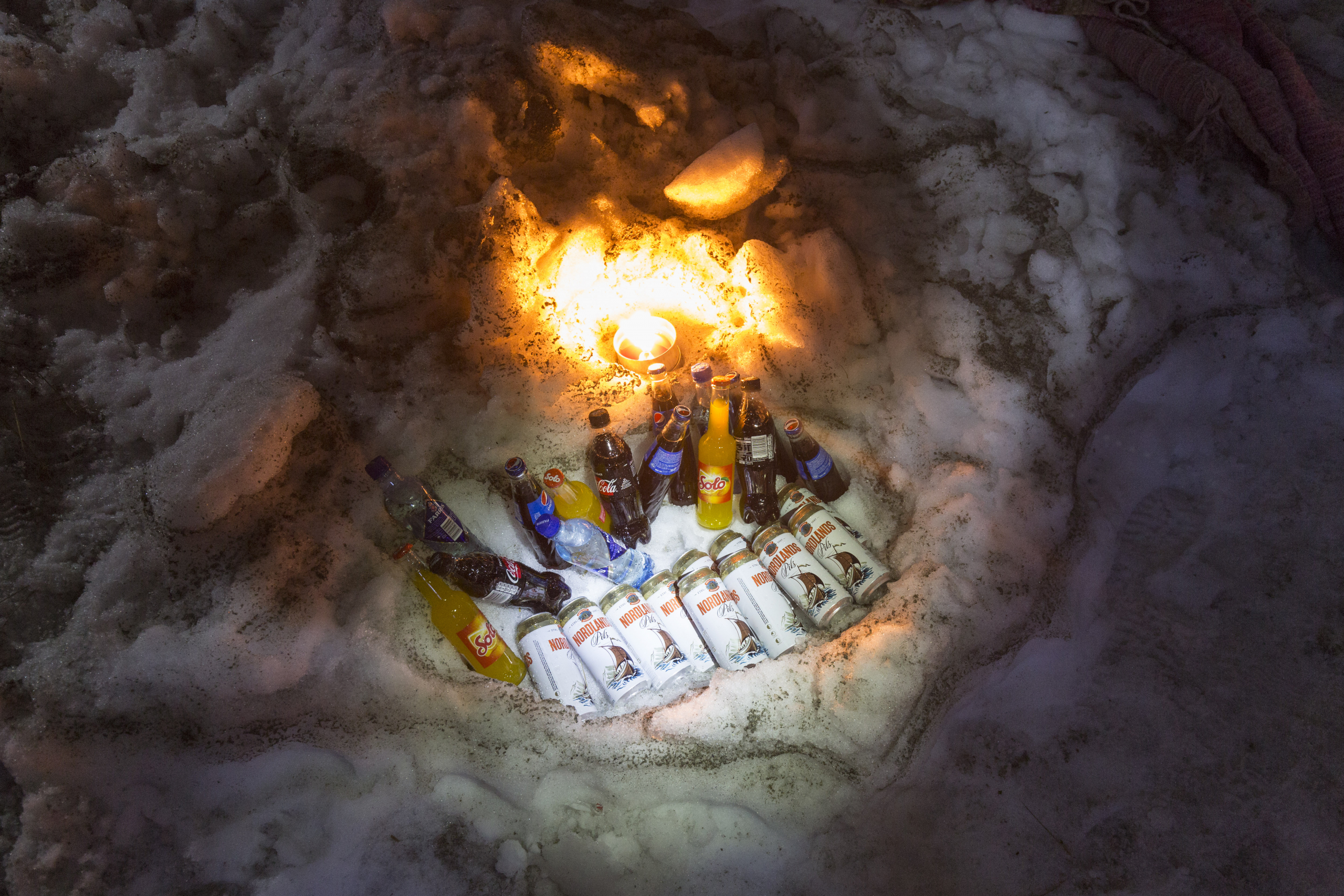 The evening has only brought 35km of driving but, thanks to the Norse weather gods, it’s taken nearly an hour (most of it spent with our eyes on stalks).

After a hearty dinner, a few more tins of the finest local lager, and some excited chat of tomorrow’s planned adventures the time has come to hit our motorised sack.

The thought of camping out in temperatures approaching minus three Celsius may send a shiver down the spine of even the hardiest outdoorsmen but the Volkswagen California Ocean has (one of many) tricks up its sleeve to help us beat the overnight chill.

As well as being ridiculously well insulated the Californian comes with an auxiliary heating system that runs off one of the van’s three batteries.

Charged up by our evening jaunt through the snow, the auxiliary system has been gently heating the van while we feasted and will continue to do so while we sleep.

Combined with a mattress more comfortable than our own worn out bed at home, it provides a perfectly pleasant night’s sleep (despite the occasional shockwave from a heavy blast of frozen wind catching the side of the van). 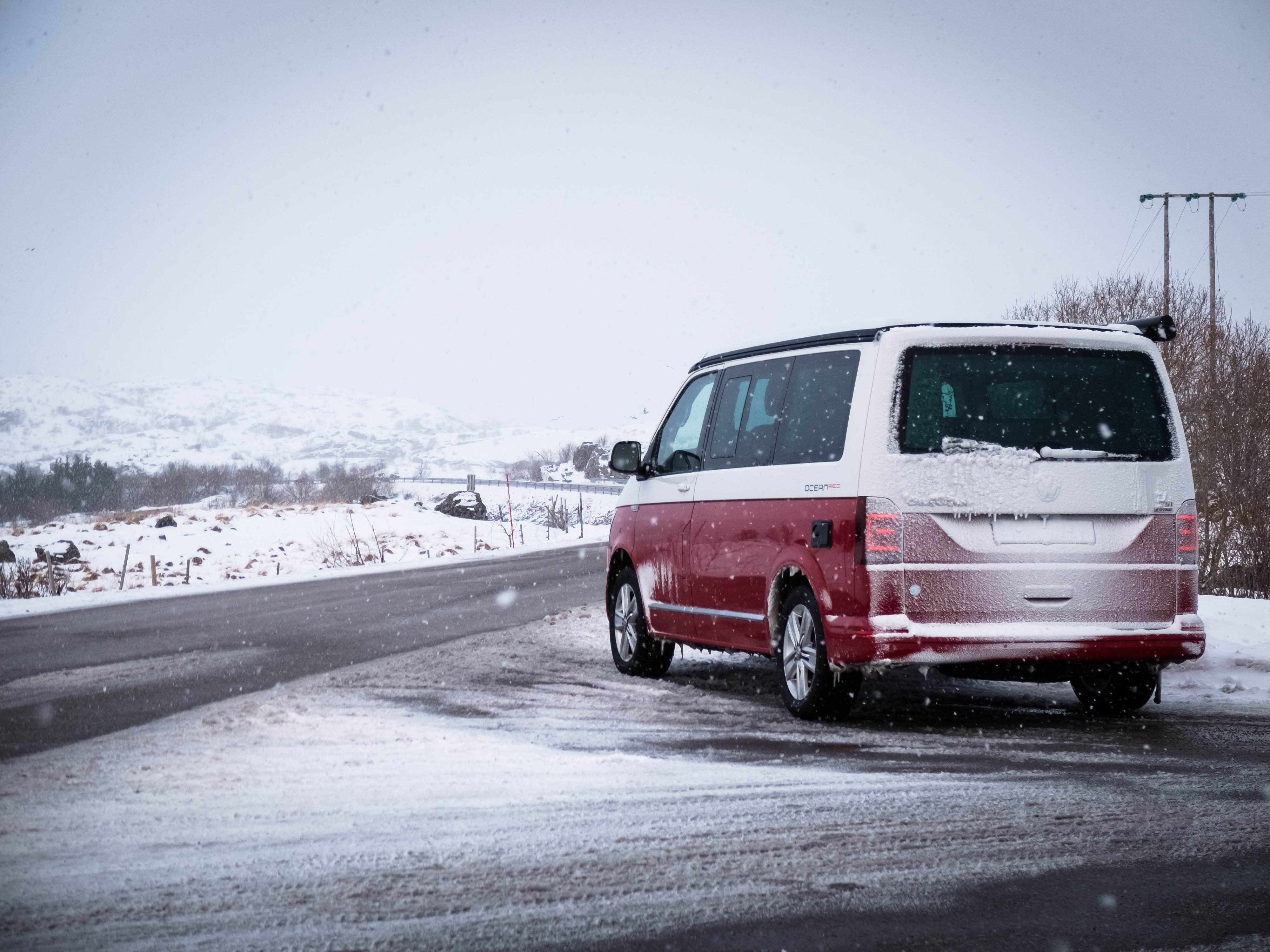 While the night before had shrouded our surroundings in a veil of mystery, drawing the retractable blinds from the California’s eight windows brings with it an inadvertent dropping of our jaw.

We had been told by the Hurtigruten guide on our ferry over to Lofoten that the archipelago provided some of the most stunning scenery in all of Norway but words couldn’t really prepare us for the vista that greeted our breakfast.

Keep an eye on flatoutmag.co.uk over the coming days for the second instalment of our three-part Arctic Circle adventure with Volkswagen’s California Ocean camper van.