Some road trips are undertaken because the lure of an exotic location or secretive ribbon of tarmac proves simply too much for the ardent petrol head to ignore.

On the other hand, some road trips are tackled seemingly out of necessity: the need to get from A to B in a vehicle that is most suited to the job.

This particular expedition, which spanned a frankly ridiculous 1300 miles in one of the most insane vehicles Mercedes-Benz currently sells, was born out of a number of things: boredom, intrigue and an ‘ah, f*ck it all’ attitude.

Early planning conversations went a little bit like this: James Cregan, he of Jimmy’s Iced Coffee fame, dropped us an email explaining that he had an important meeting to attend in Heidelberg, Germany. 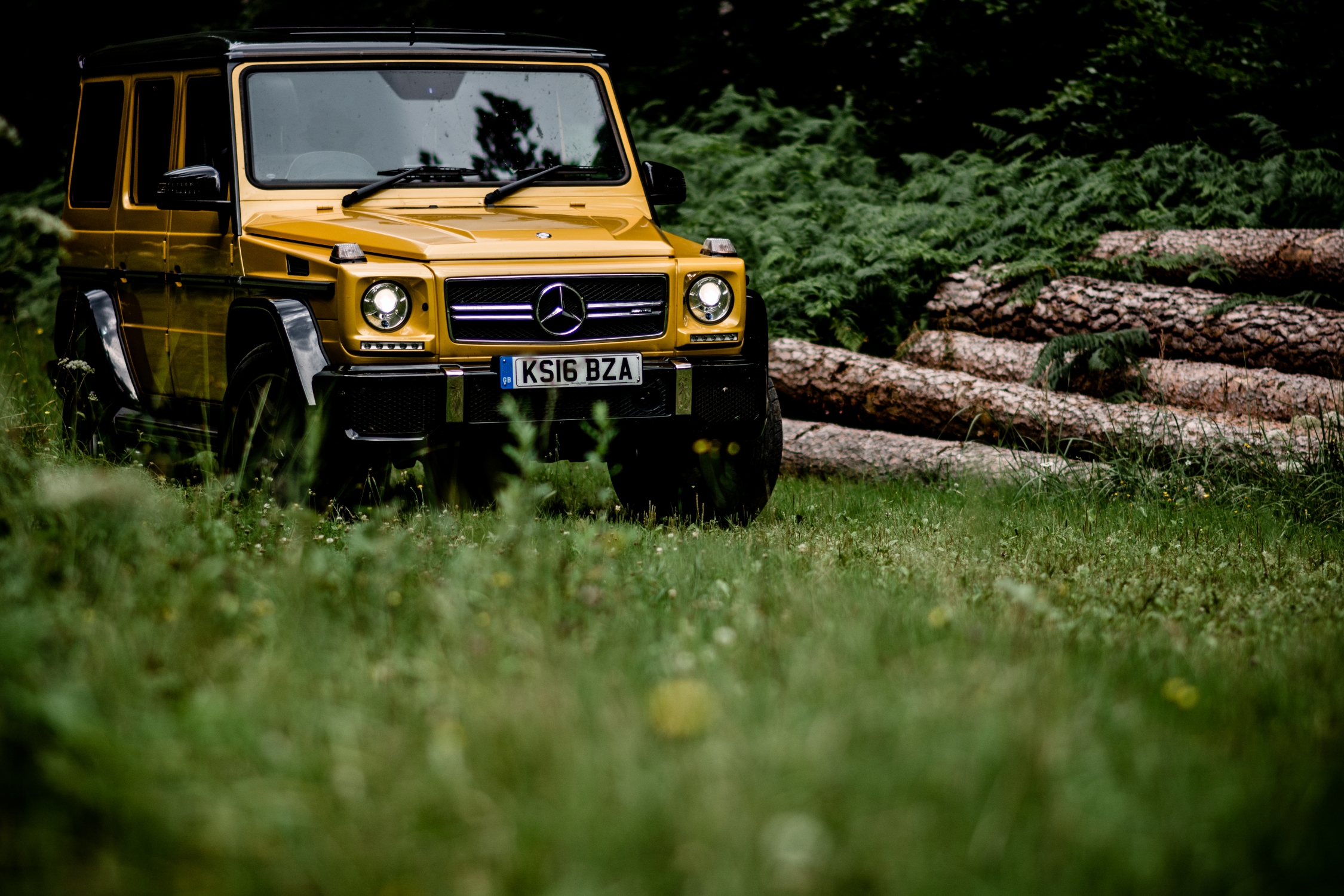 “Rather than flying, which is really boring, let’s just drive it. Drive it in something stupid fast,” he went on to explain over the phone.

It was decided that we would also squeeze some sight-seeing in to the trip to ensure the journey wasn’t just about pummelling the German Autobahn network and a suggestion of a visit to the Mercedes-Benz museum was floated, simply because it was sort of in the vicinity of our intended destination… sort of. 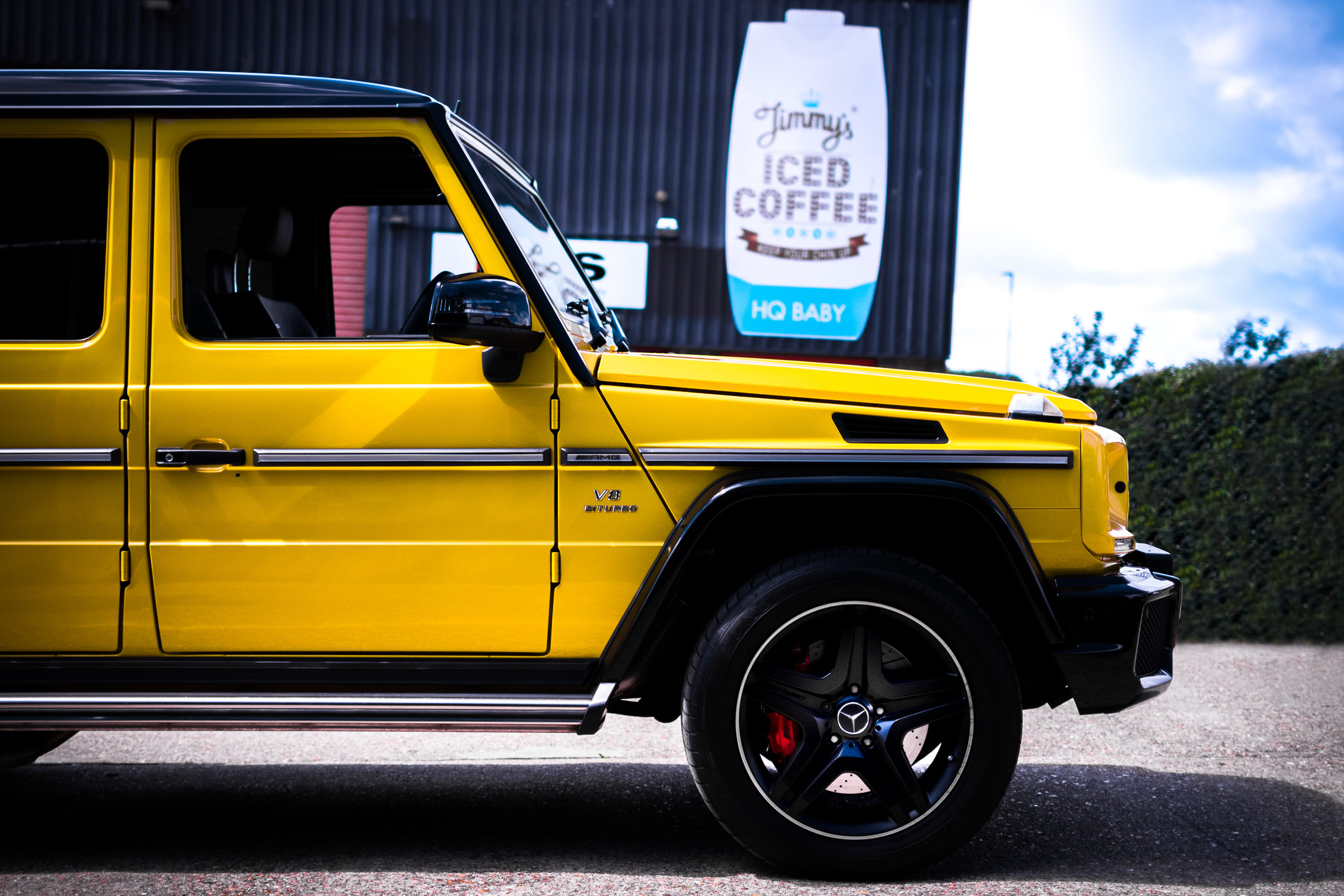 We would continue to riff on this rough plan until the subject of AMG’s 50th birthday was breached and the fate of this excursion sealed: it would be Bournemouth to Heidelberg and back in a supremely comfortable Mercedes-AMG product.

A Mercedes-AMG E63 would have been the sensible choice. It’s large, comfortable and devastatingly quick. Failing that, a C 63 Saloon or even an A 45 AMG would have sufficed.

However, those words “stupid fast” seemed to resonate with us. We just chose to interpret them in a slightly different way to everyone else.

So, we plumped for the frankly ludicrous Mercedes-AMG G 63 – a vehicle that was never really designed to transport four grown men across Europe in luxury, let alone house a 5.4-litre, twin turbo V8 under the bonnet.

The excitement as the bright yellow (actually, it’s Solar Beam) rumbles into the yard of Jimmy’s Iced Coffee HQ is palpable. It comes as no surprise really, what’s not to love about a gigantic four-by-four with an equally monstrous V8 engine and side exit exhausts?

Jimmy and his colleague Luke quickly go to work loading bags into the heavy rear door, amidst snapping photos and updating the relevant social media accounts.

While they get giddy, we get to grips with the surprisingly basic sat-nav system and begin punching in destination details. It’s 12.30pm now but it looks like we won’t reach Heidelberg until at least midnight. 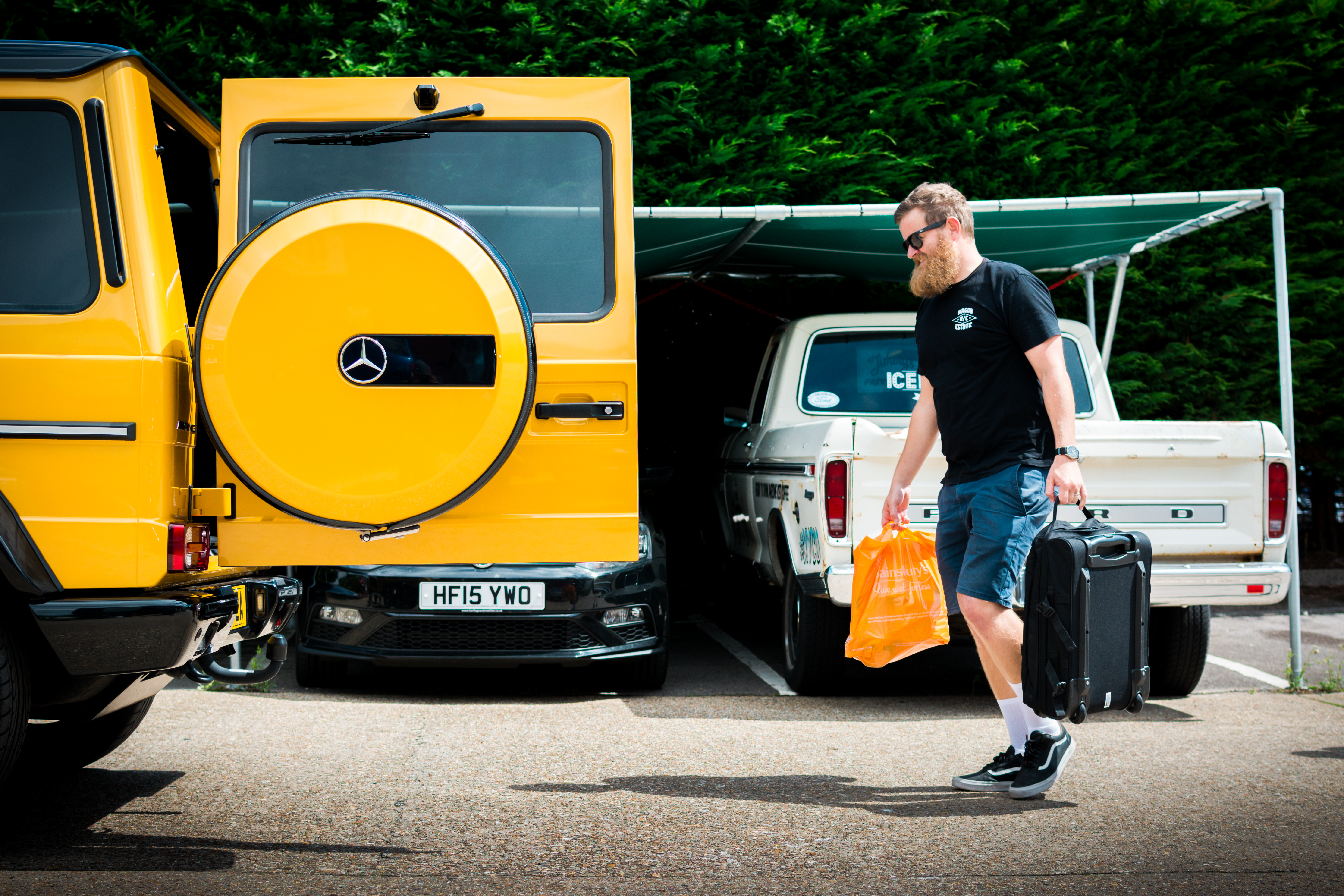 With everyone and everything loaded, including a precious cargo of iced coffee, we plough full steam ahead towards Folkestone and the Eurotunnel, the G 63 warbling and burbling as it navigates the quiet Sunday streets of Christchurch.

It is not long though before we hit some open motorway and get our first real opportunity to open up the taps. A clear slip road allows us to accelerate with gusto up to speed, which results in some appreciative laughter from the rear two seats.

For a two and a half-tonne machine that was originally designed in 1979 to tackle the rough terrain of rural Austria, it doesn’t fail to impress with its ability to dispatch the 0-62mph sprint. 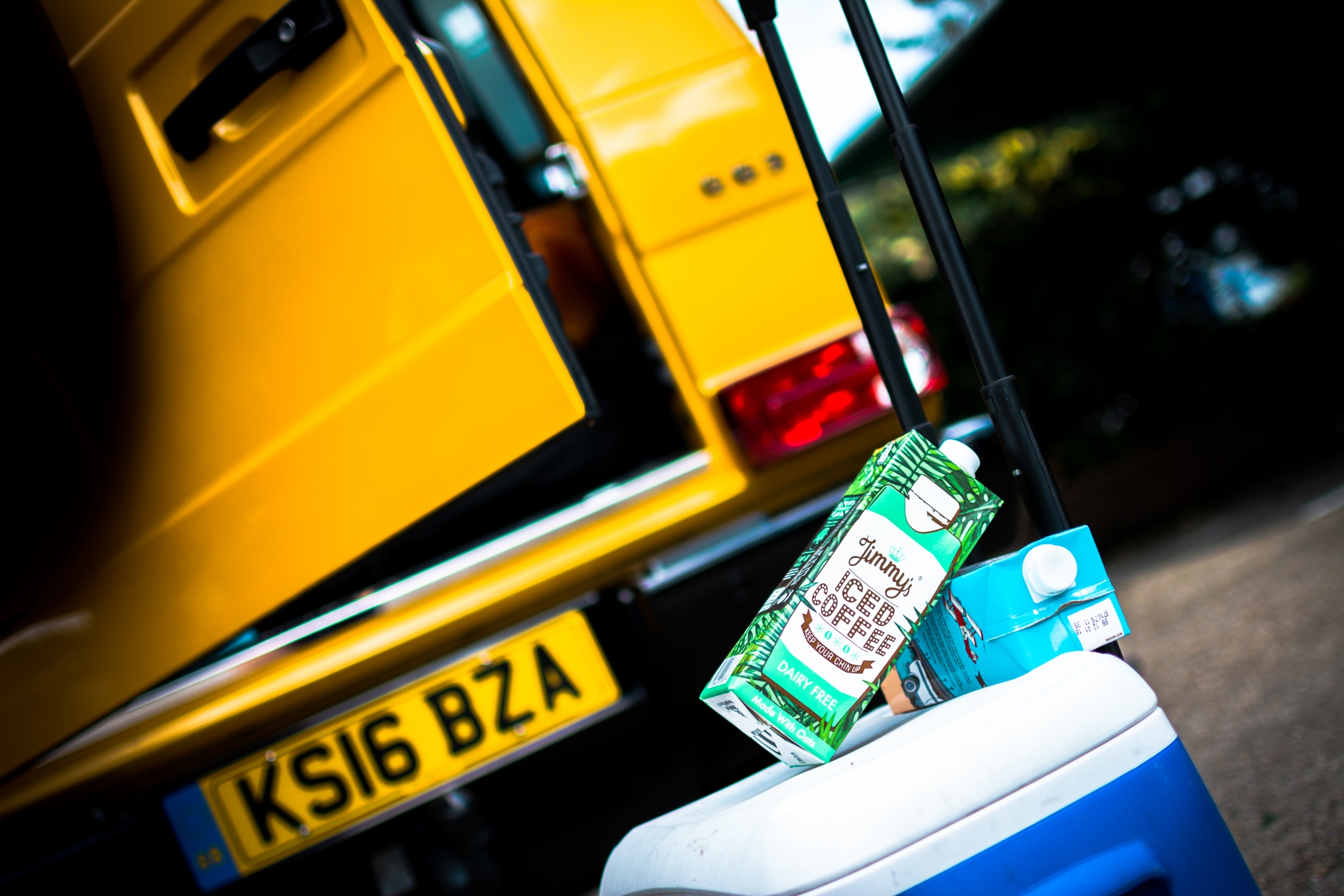 On top of that ludicrous 571hp, 5,461cc V8 engine, this particular model is also kitted out with a limited ‘Crazy Color Edition’ paint scheme, DVD players in the rear and a supreme Harman Kardon Logic 7 surround sound system. It costs a cool £160k.

That said, it’s not long before the first comment about the overly harsh ride is uttered from somewhere inside the cabin. Being an AMG product, it is tuned with high performance in mind, meaning the suspension has been fettled to improve cornering and agility but it does nothing for the ride at motorway cruising speed.

Push the goliath to, ahem, slightly higher speeds and it becomes a complete, teetering handful, constantly reminding the driver that it doesn’t really like going fast.

We opt to stick to a licence-friendly pace and plough on towards our train.

The Eurotunnel is delayed and we suffer a further hold-up when security decides to give the G-Class a thorough going over.

There is a collective call to play the automotive discrimination card but it soon dawns on us that we are that four blokes in baseball caps (most of whom sport impressive beards) cruising towards the border with hip-hop blaring out of the most famous off-roading AMG.

“To our delight, the petrol station is packed to the rafters with old American hot rods”

“Do you have any knives or guns in the back, boys?” enquires the distinctly under-muscled Folkestone border officer. “No, but we do have some deliciously tasty iced beverages,” comes the reply.

With this, we avoid the dreaded rubber glove and manage to offload in Calais as the sun starts to fade from the sky.

There is still a good 400 miles to run to our final destination yet we’ve barely cleared Lille before the G 63 decides it desperately requires fuel. Who’d have thought a 5.4-litre V8 would be this thirsty, huh! 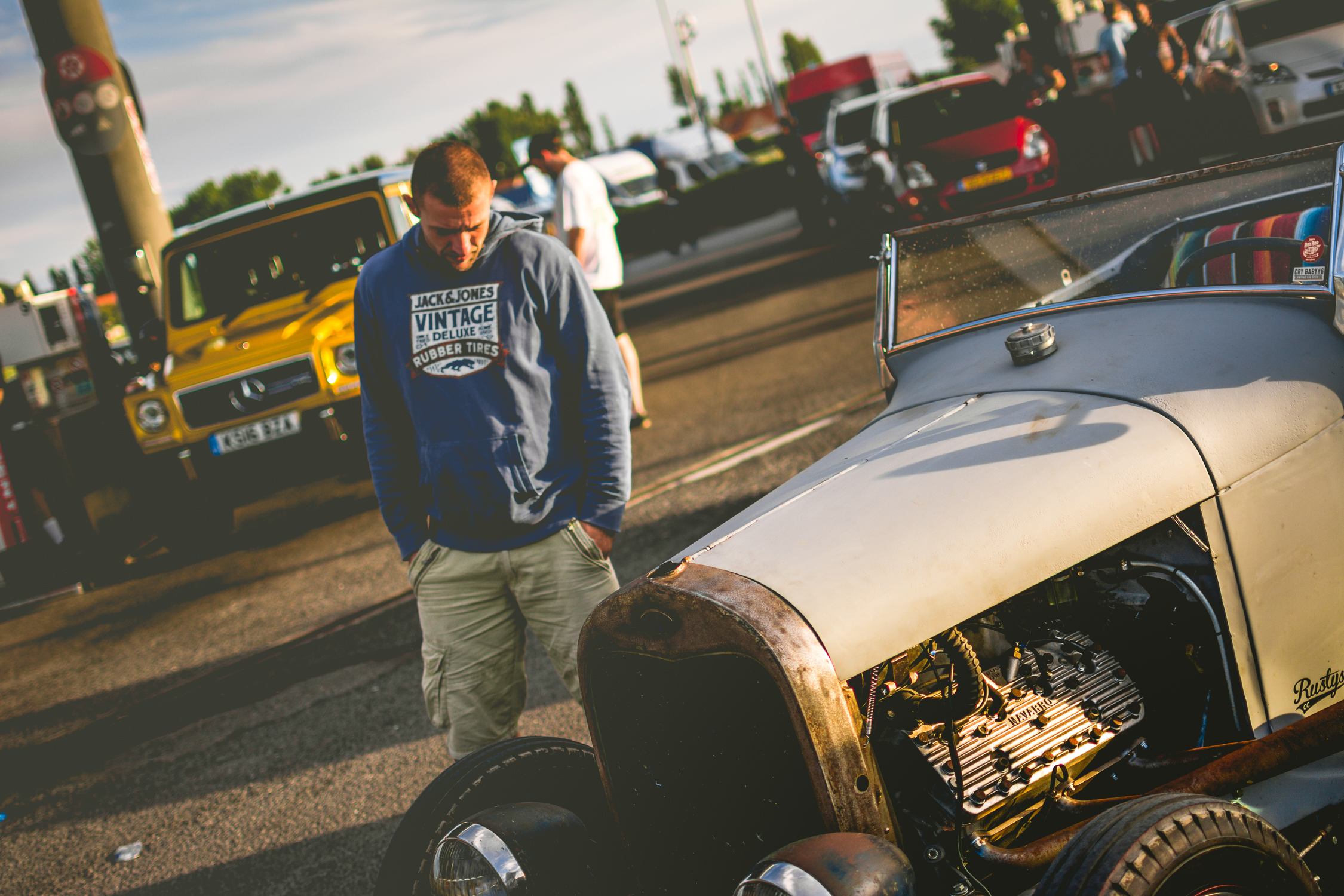 To our delight, the petrol station is packed to the rafters with old American hot rods, rat rods and beautiful vintage muscle cars that are cruising their way down to a meet in Belgium.

A flathead Ford Model B Roadster is garnering a fair bit of attention (alongside its Coupe cousin) while our eyes are drawn towards ‘Animal Express’, a tastefully distressed 1950s Chevrolet panel van. V8s make everything cool.

It’s not all smooth sailing for the band of Belgian greasers though. There’s some frantic hammering going on around one of the hot rods’ front wheels, yet there’s still an appreciative nod towards our big German barge as the side exit exhausts bark into life and we once again get rolling towards the G 63’s homeland.

To cut a long story short, we checked into our hotel in Heidelberg at 2.30am. It is now 6.30am on day two and we are up, dressed and sleepily forcing a typically continental breakfast into our fatigued faces.

The route up was slow and full of fuel stops, taking us many hours more than we expected, although small snippets of derestricted German autobahn helped to keep all of the G 63’s occupants awake and sharp.

“Of all people, it was the Shah of Iran who convinced Mercedes-Benz to try its hand at an all-terrain-conquering 4×4”

It doesn’t take long to realise that high-speed, cross-country hacks weren’t really this machine’s speciality, with the vague steering and bouncy suspension system catching a number of drivers unawares, as well as causing uncomfortable groans from the rear quarters as others tried to catch some zeds.

But with just four hours sleep under our collective belts, it’s time to deliver Jim and Luke to their all-important meeting in rural Germany, so we saddle up and make the hour-or-so drive to Schlüchtern. 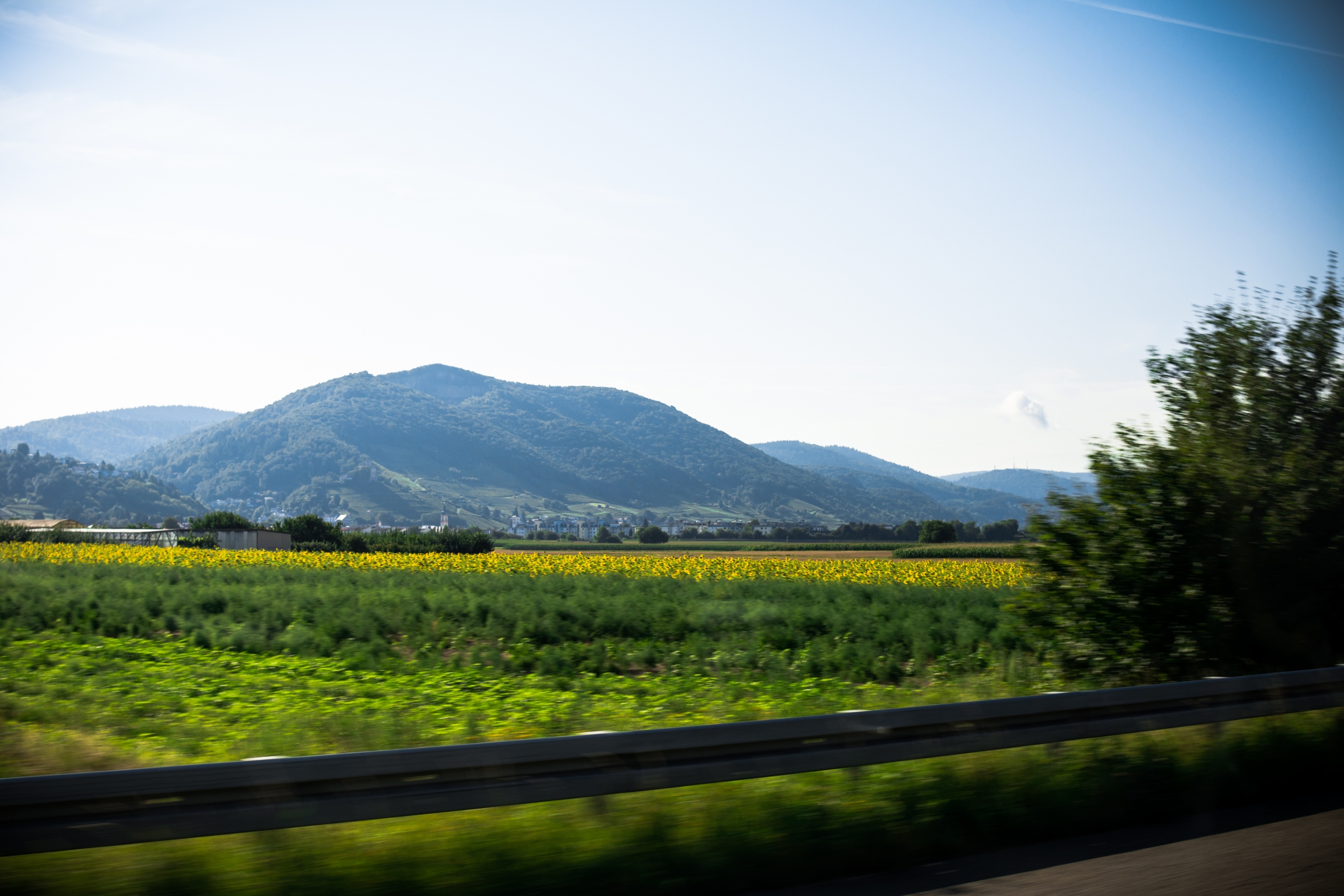 Once the Jimmy’s contingent are successfully delivered to the rendezvous point, fellow Flat-Out-er, Josh and I head for the hills.

Despite proving perfectly apt as an inner city street cruiser, the G-Wagen (we know it’s now the G-Class but for us, it will always be known as the Geländewagen) was originally designed and developed to serve as a military vehicle.

Of all people, it was the Shah of Iran who convinced Mercedes-Benz to try its hand at an all-terrain-conquering 4×4. 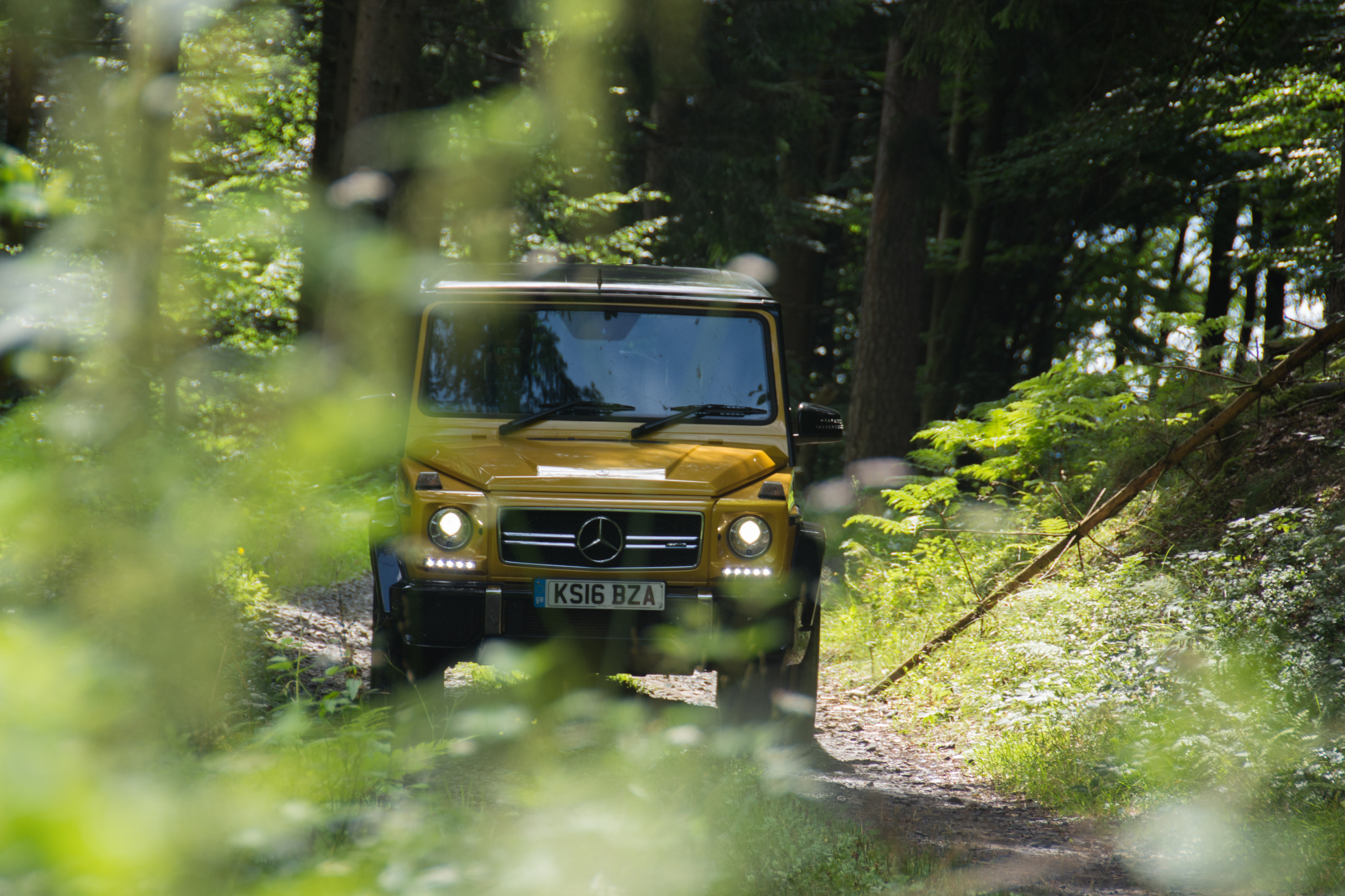 Successfully persuaded, the German marque subsequently joined forces with Austrian military vehicle manufacturer, Steyr-Daimler-Puch. The result was a basic cubic body that sat on top of a ladder chassis, with three locking differentials and a wide variety of petrol and diesel engines.

It naturally proved popular with various militaries and certain sections of the public that liked to drive up the side of mountains for a laugh, purely because it was – and still is – so formidable off-road.

But alas, the Range Rover arrived in the 1980s and proved that big 4x4s could also double-up as successful luxury machines, Mercedes got jealous and threw a load of leather and wood at the interior of its Gs to compete, despite the basic package changing very little.

Slightly weirder still, it handed the G-Class over to in-house tuners AMG in 2004 and whooped in celebration when they managed to squeeze a 5.4-litre V8 underneath the bonnet. 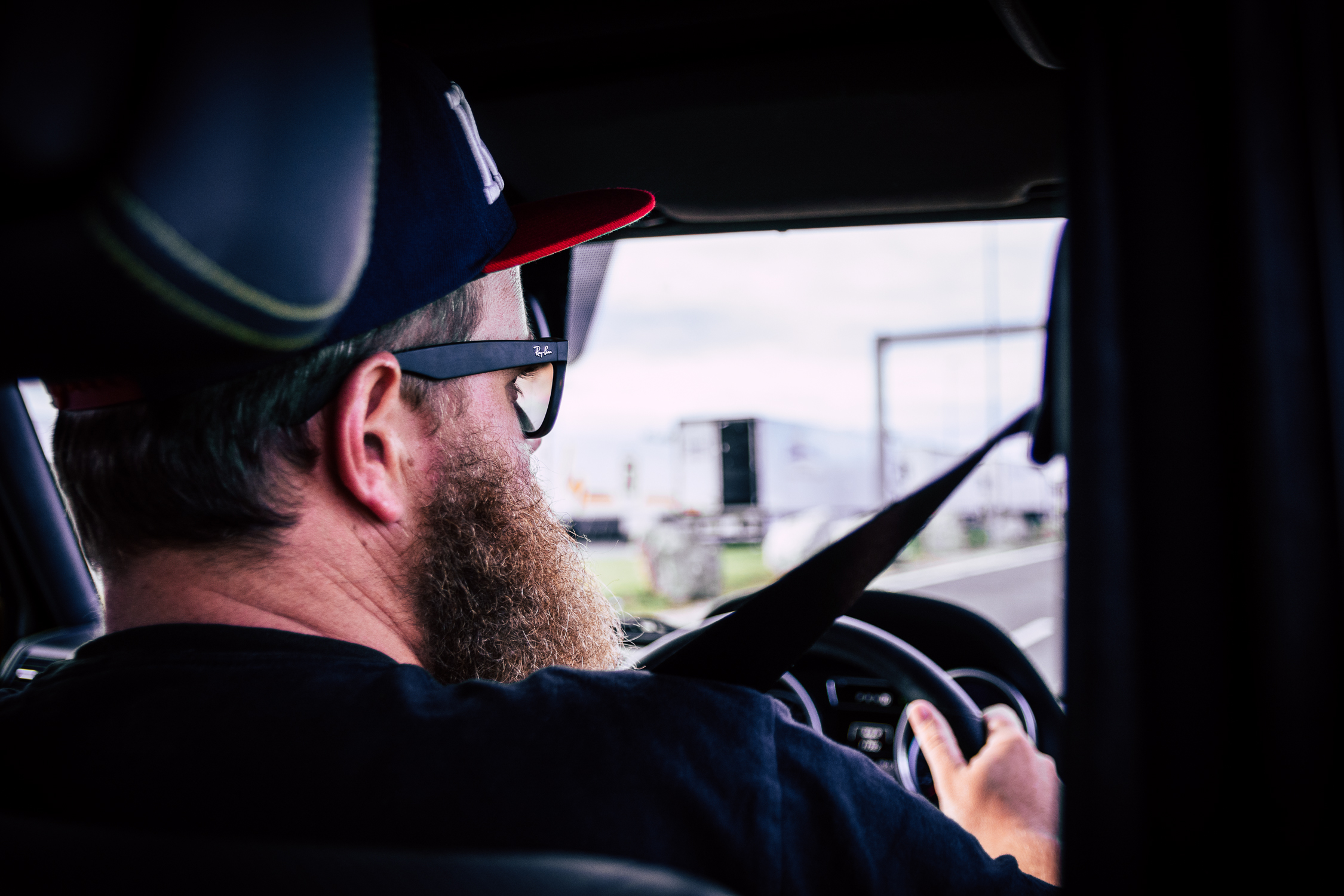 In short, we are barrelling down a tight and twisting road in a big metal box with three locking differentials, AMG tuned suspension and a brutally turbocharged V8 engine.

None of it makes sense but away from the monotonous bouncing and jarring of the motorways, the G 63 starts to feel fun.

Do you like burgers? Do you like hip-hop? Do you like eating burgers while listening to hip-hop? If the answer to any of the above is ‘yes’, you will adore Joe Molese.

This buzzing place, tucked down Steingasse near the River Neckar, serves insane beef burgers that are large and calorific enough to floor even the most hardened diner. 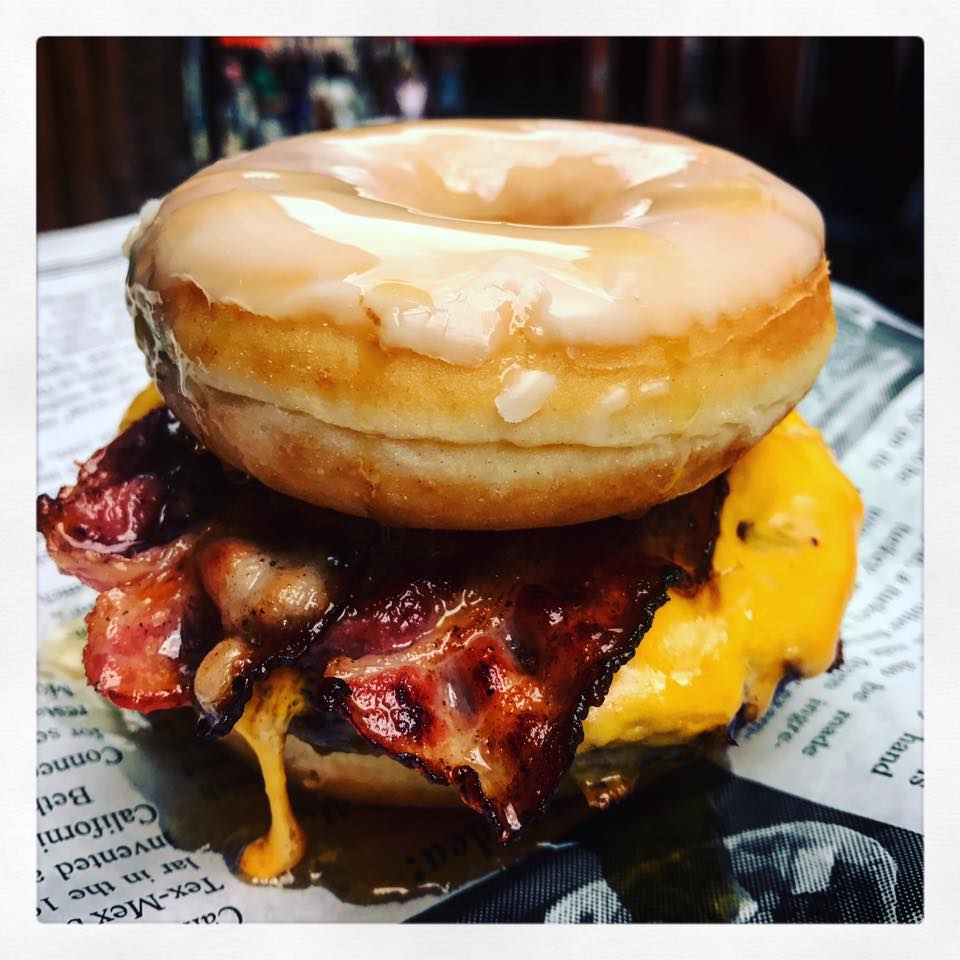 Famed for its Burger of the Week, Joe Molese will regularly throw Angus beef between two glazed donuts or pile chilli and cheese on top of his creations, and then suggest a side of onion rings to go with it.

Health freaks will likely have a heart attack by simply studying the menu but Joe’s impressive array of canned sodas, candy and hip-hop jukebox make for an excellent slice of Americana in the middle of Germany.

The basic format of our time in the hills was: accelerate, brake heavily, tentatively take corner for fear of understeering into a tree and accelerate out when the road ahead is clear.

A big shot of adrenaline is delivered when the twin-turbos spool up and the V8 roars from beneath that huge, boxy bonnet. Another is supplied when the brakes are mashed for the next corner and inertia does its best end the fun early. 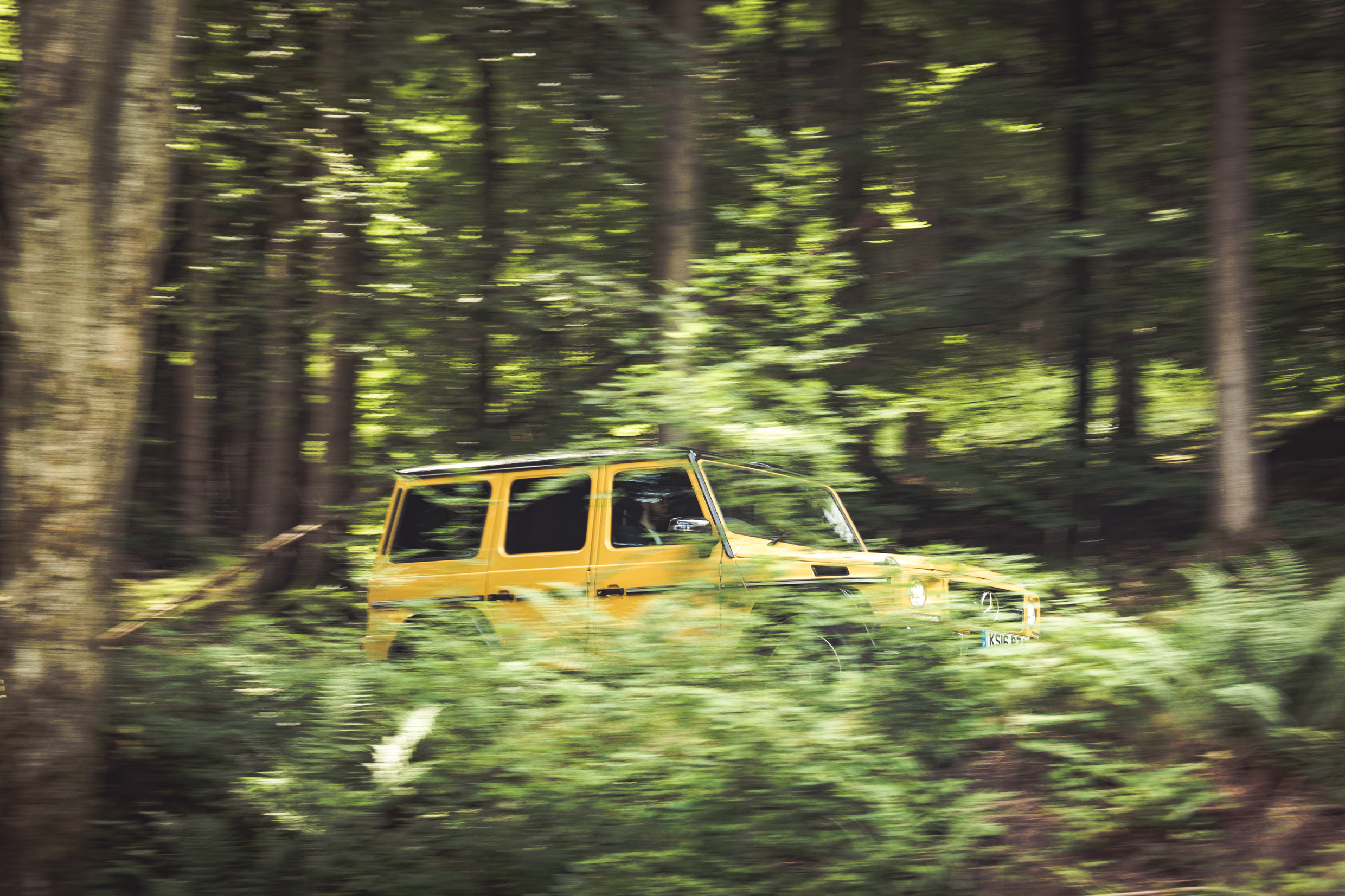 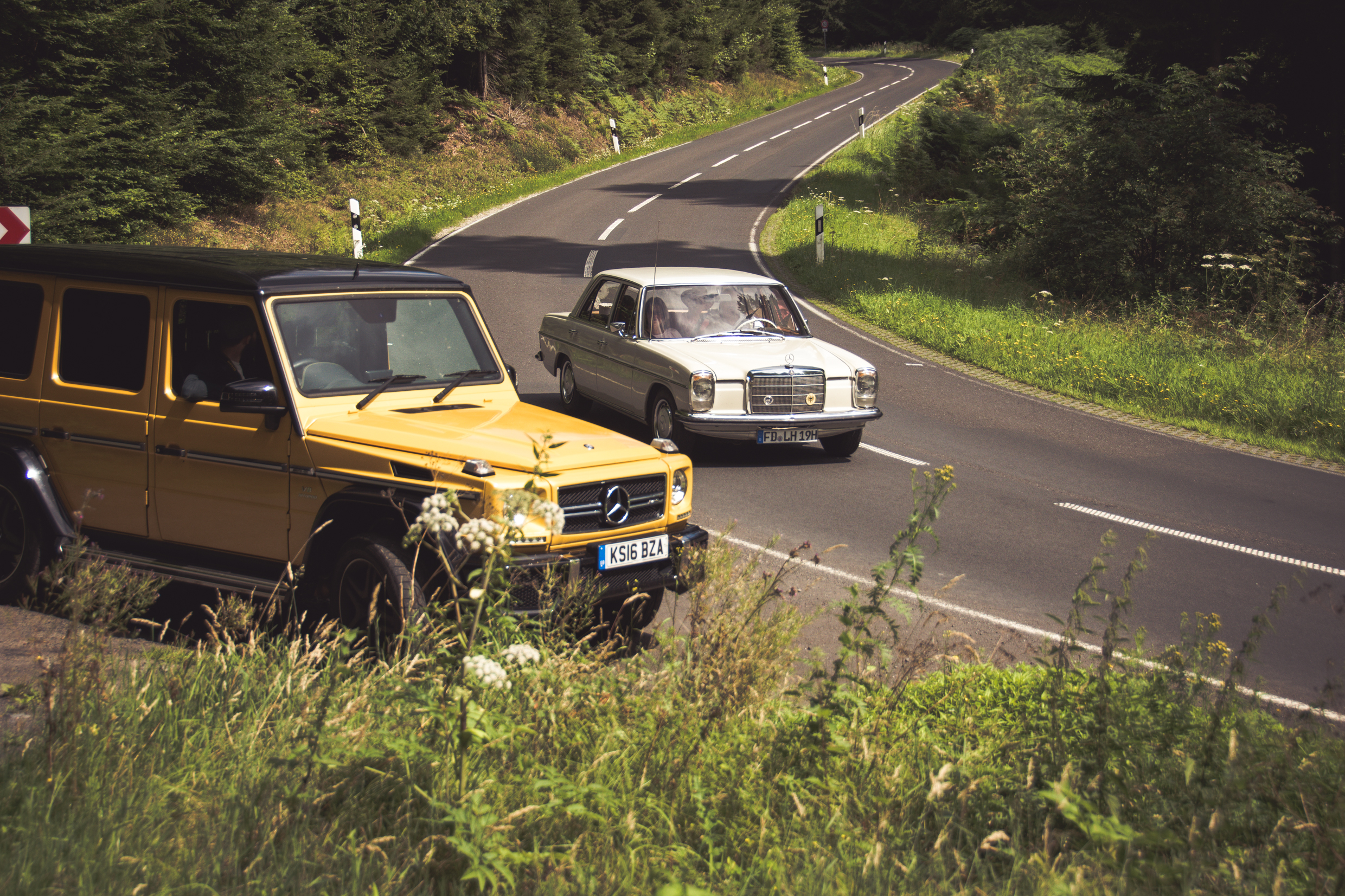 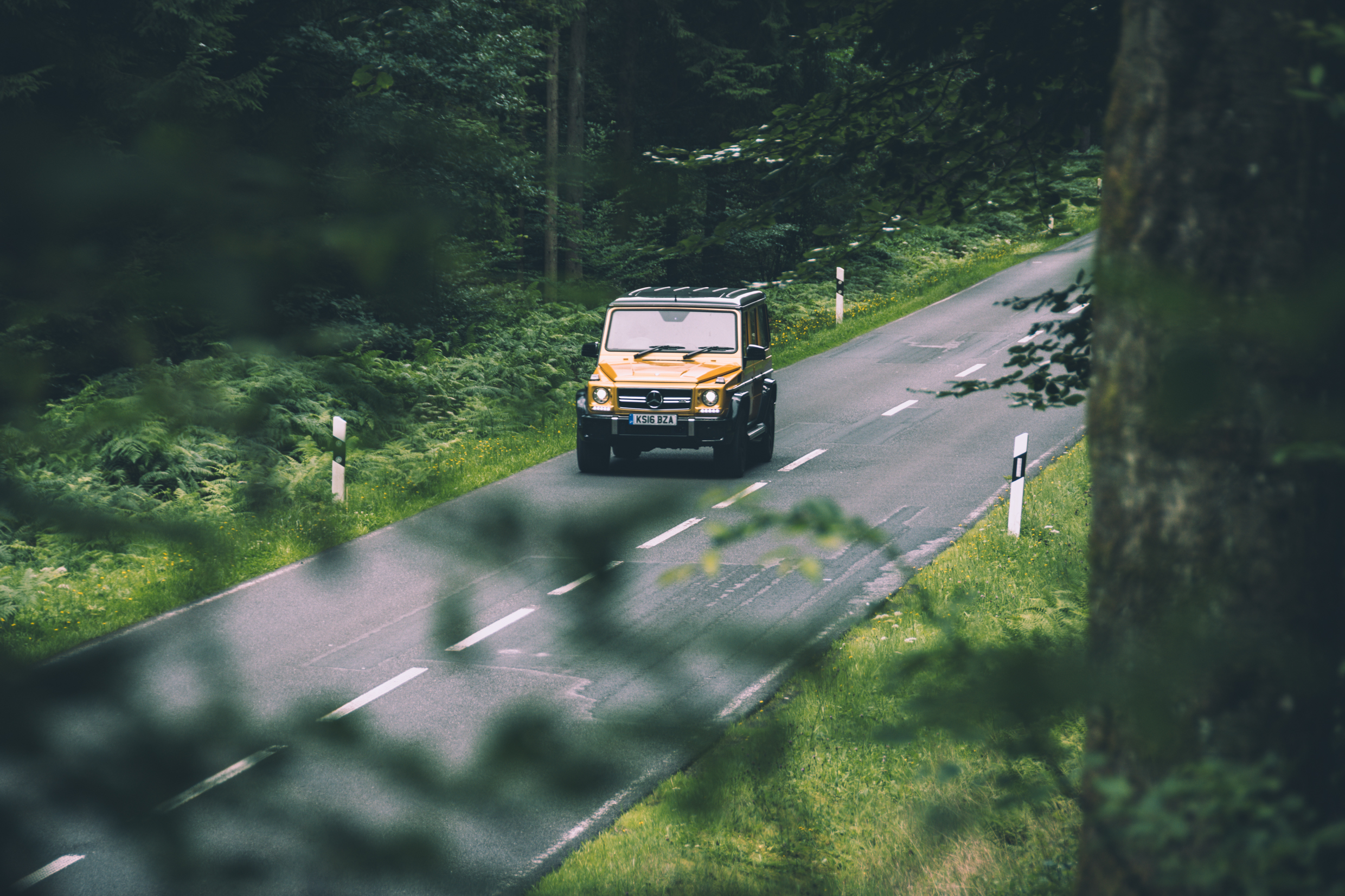 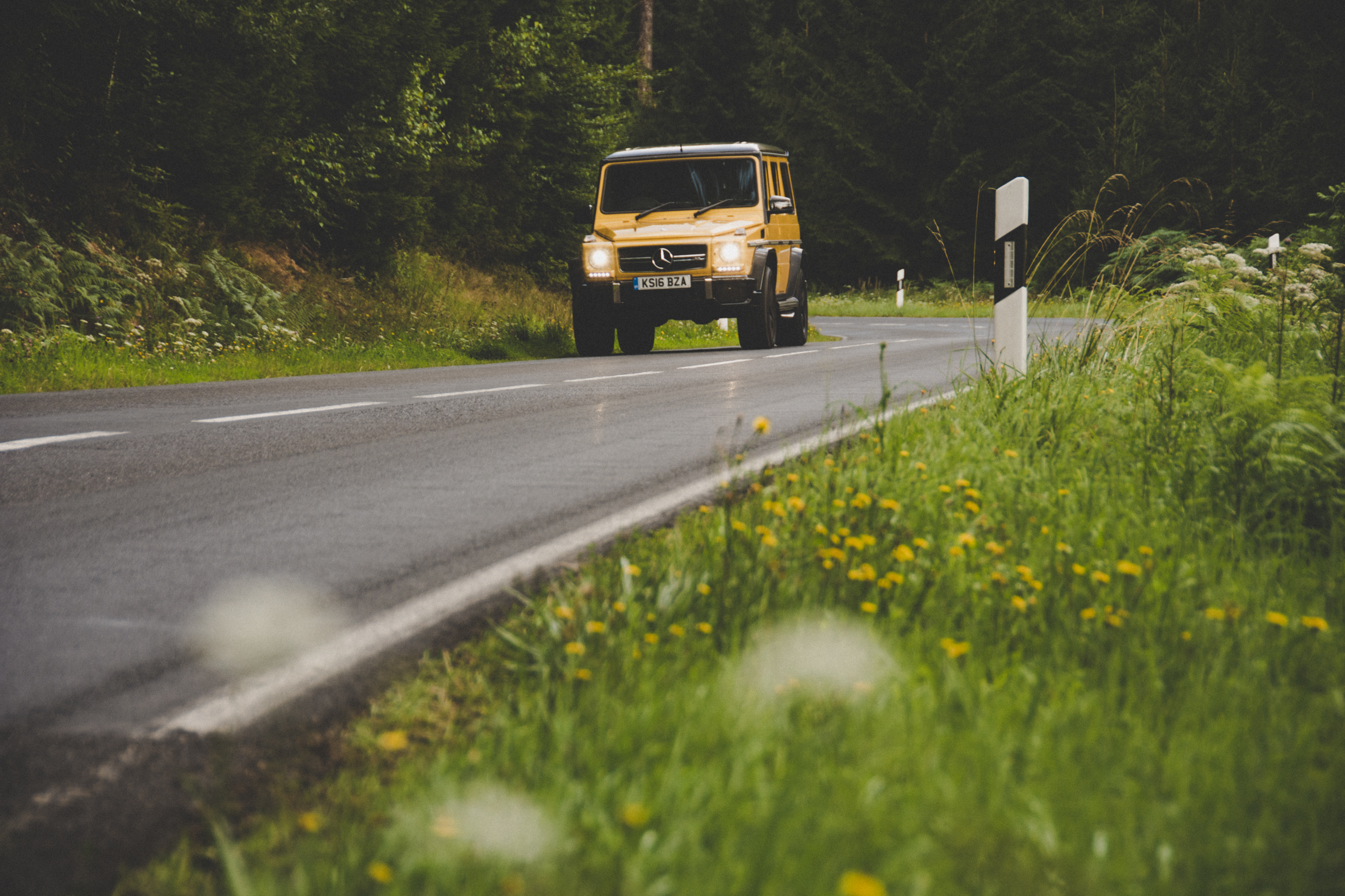 It’s a pretty diabolical drive and almost baffling that it actually wears an AMG badge but that’s why so many fall head over heels for this big goof.

It’s arguably the most ridiculous thing to ever come from the Affalterbach factory and proof that – short of a kitchen sink – AMG can tune just about anything.

With Jimmy’s meeting over, we leave the seclusion of the forest and head back to Schlüchtern, picking up our ‘clients’ before rumbling on down to Heidelberg for a few well-earned pints of Pilsner and some grub.

Many, many calories later –see the boxout for a full rundown – and we totter towards our respective beds, plans firmly laid to squeeze in a visit to the Mercedes-Benz Museum (a further hour-or-so south in Stuttgart) on the long trek back to Bournemouth.

Suffice to say that, on top of a rather tasty collection of old Benzes, it would involve many miles of motorway, plenty of petrol stations, tons of traffic, several expletives aimed at the irritating suspension set up and a healthy dose of hilarity.

But that’s the point of a pointless road trip, isn’t it?

Through the Lens: Mercedes-Benz Museum