There are very few cars that get a reaction quite like a Mercedes-Benz G-Wagen. Its steroid-fuelled styling, enormous footprint and raucous engine note (in AMG models, at least) have passers-by either staring slack-jawed in amazement or shaking a walking stick in dismay.

It is not particularly practical, it is terrible on fuel, previous generations have been bloody uncomfortable and it has all the grace of an anti-aircraft missile turret, but the profligate continue to consider the £143,305 asking price for this V8-powered G63 AMG version to be completely reasonable. 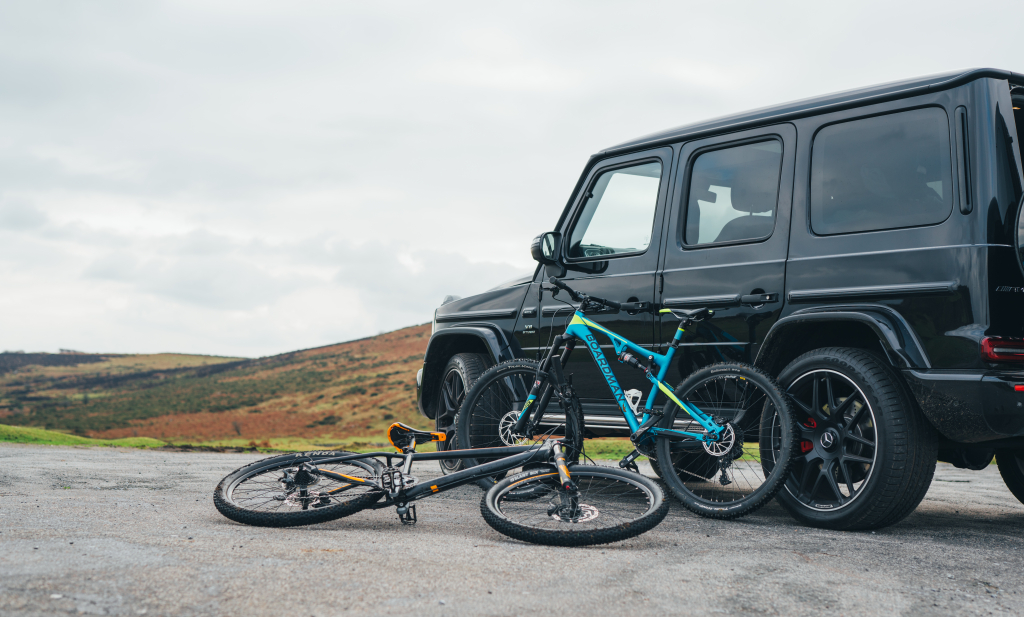 Perhaps a quick stroll through the dusty halls of history can help get to the bottom of the Geländewagen’s appeal.

The well-trodden tale states that the Shah of Iran approached Mercedes-Benz back in the early 1970s with the idea of creating a proper military vehicle, but one with the mechanical backing and everyday useability of a trusted German manufacturer. 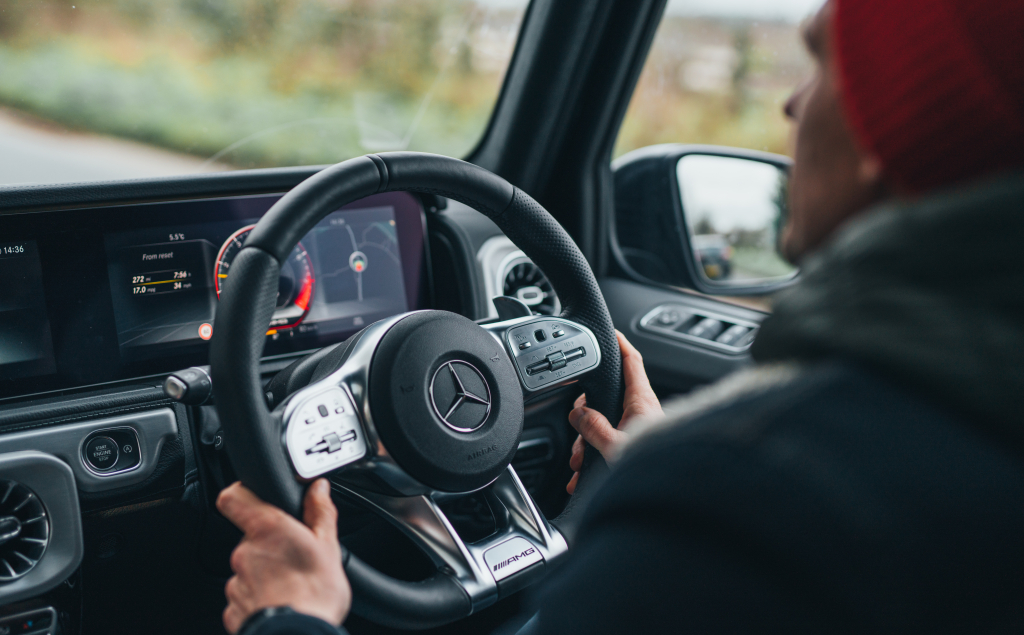 As a result, Austrian military vehicle manufacturer Steyr-Daimler-Puch was drafted in to help construct the oily bits and the resulting muscular machine has served in numerous European armed forces ever since.

You could argue that Mercedes’ little side project produced a very early example of an SUV, but it wasn’t until the late 1980s that the G-Wagen transformed from farmer’s friend to Chelsea tractor. 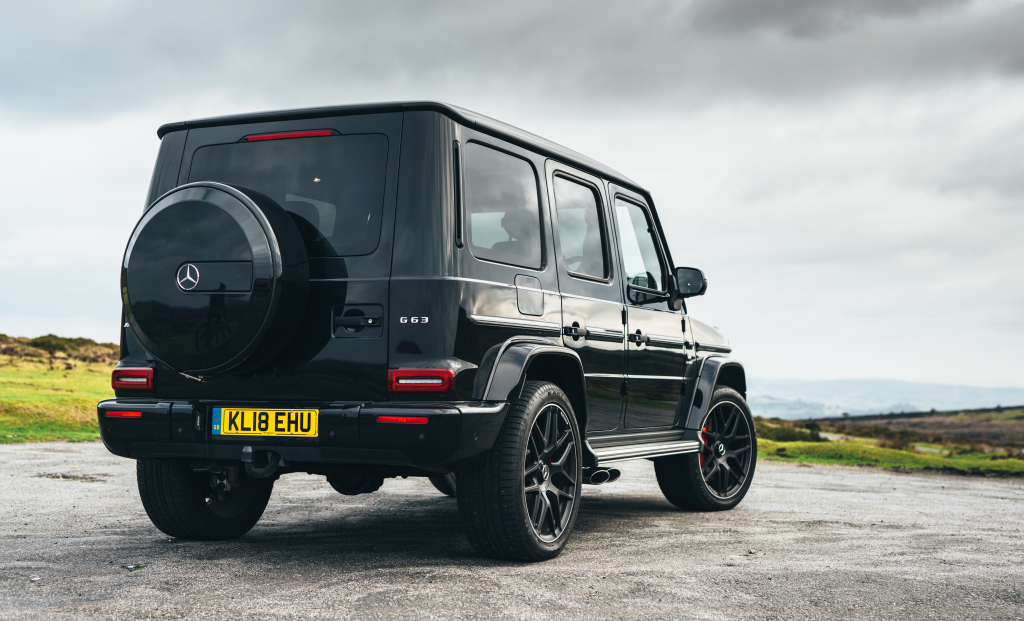 Since then, the Germans have been stuffing this blunt instrument with all manner of luxurious touches, including hand-stitched leather interiors and mightily powerful engines fettled by its revered tuning arm AMG.

Like it or not, the hulking brute has won a place in the heart of oligarchs, footballers and the nefarious, all of which appreciate the reputation that comes part and parcel of ownership. 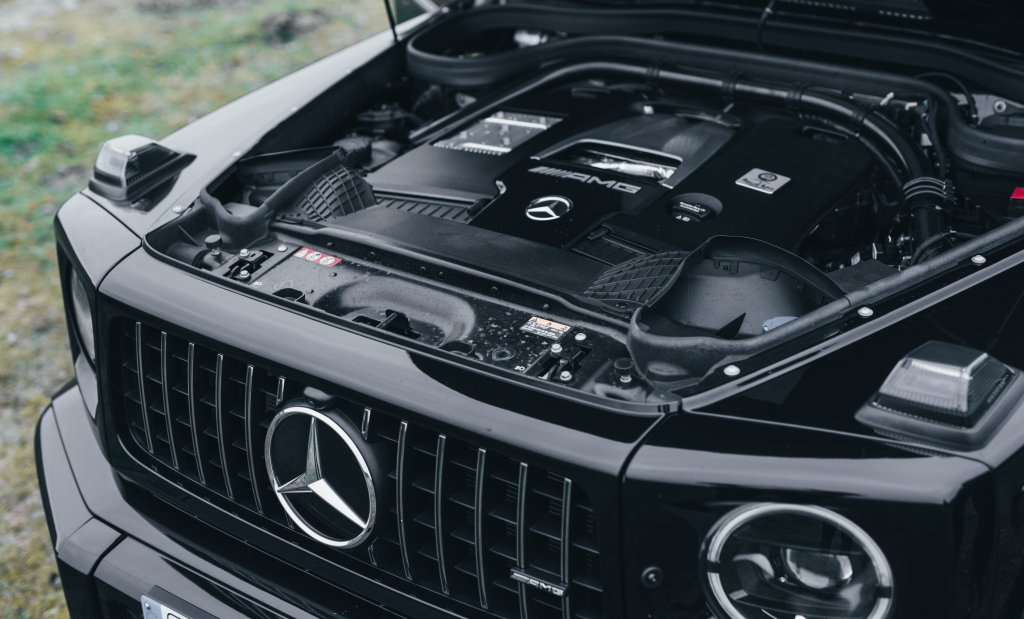 If a Range Rover suggests to fellow road users that you dabble in a spot of clay pigeon shooting at the weekends, a jet-black Mercedes-AMG G63 implies that shooting is more than just a pastime.

“The riding is demanding, with peak elevation of 1,583ft at one point, and the weather often makes exposed sections eye-wateringly unbearable”

But as a daft as transplanting a 577bhp 4.0-litre bi-turbo V8 engine into a missile silo sounds, this latest generation is arguably the most practical, comfortable and lavish yet. 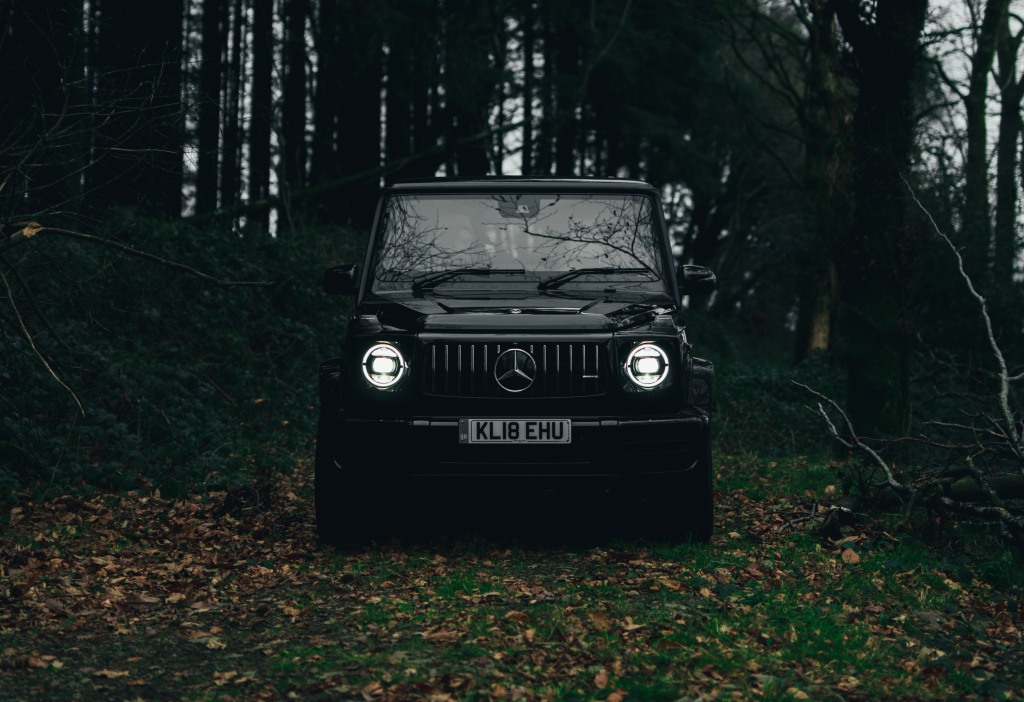 So, with that in mind, we decided to load up this monster with mountain bikes and make a beeline for the idyllic surrounds of Dartmoor and its many meandering trails.

The route meanders along the Jurassic Coast – the A35 following the shoreline and, thanks to a surfeit of farm machinery and caravans, is often one of the slowest roads in the south. 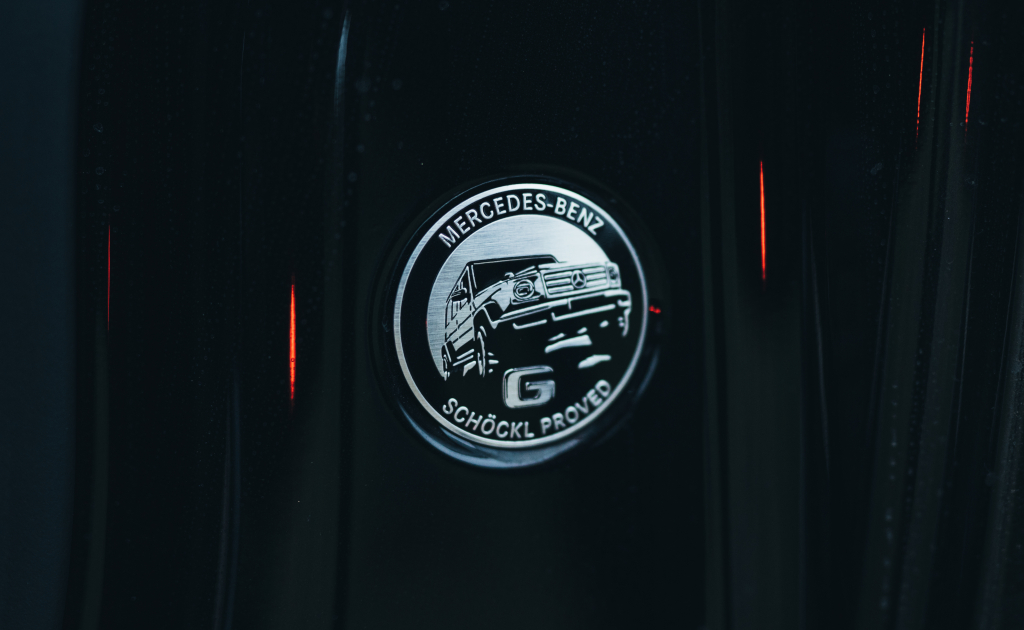 But brief stretches of dual carriageway act as the perfect test bench to experience the firepower that lurks underneath the bonnet, the twin-turbo engine providing enough shove to move a jumbo jet.

Pin the throttle and the rear of theMercedes-AMG  G63 squats for a moment before propelling passengers forward at a rate that has the potential to pickle internal organs. It’s ridiculously fast and all sorts of fun. 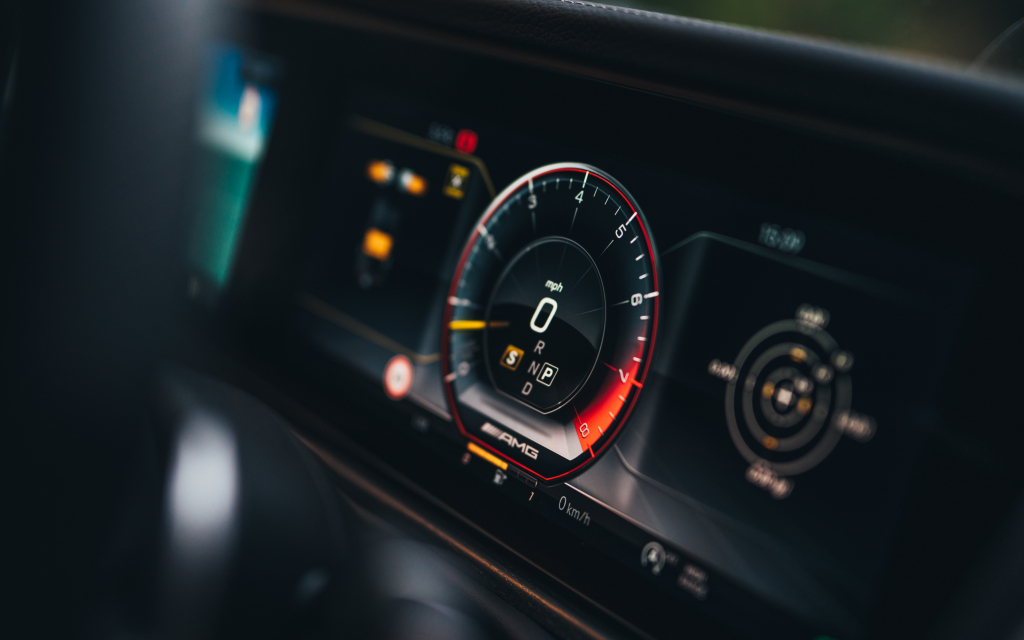 After a brief stretch on the motorway, we pick up signs for Dartmoor and peel onto much smaller, twisting roads that lead towards the vast, open expanse of Britain’s first officially decreed National Park (1951, fact fans). 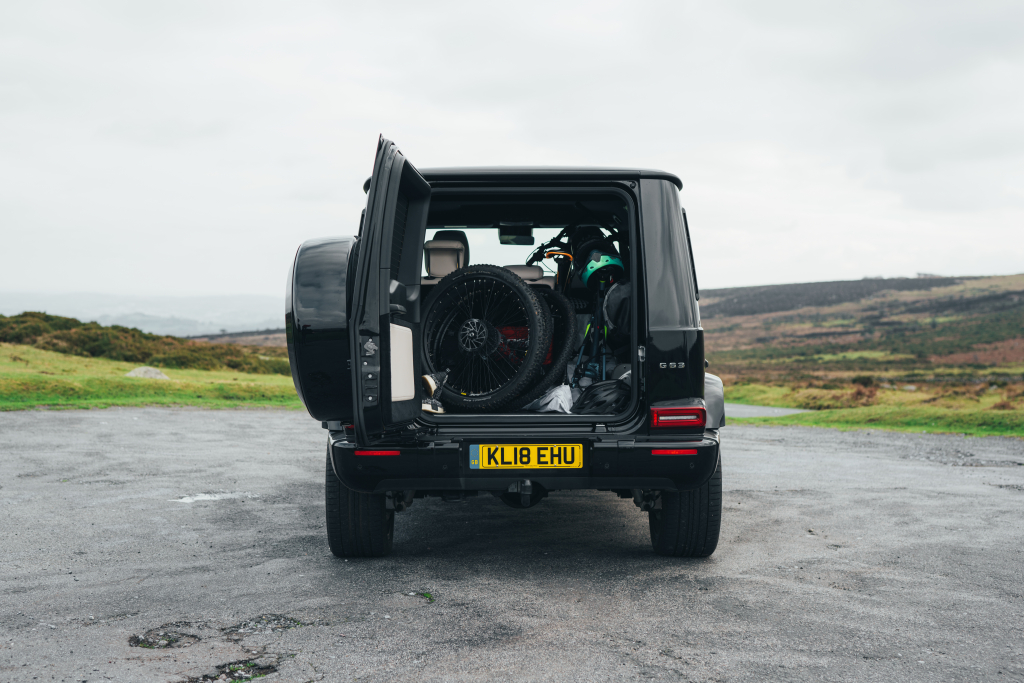 The 368.3 square miles of boggy vegetation will be familiar to anyone who enjoys the great outdoors and it’s possible to partake in everything from a long and challenging hike to some wild water swimming without anyone batting an eyelid.

“If a Range Rover suggests to fellow road users that you dabble in a spot of clay pigeon shooting at the weekends, a jet-black AMG G63 implies that shooting is more than just a pastime”

An impressive 37 per cent of Dartmoor is common land, meaning there is 450-miles of public rights of way, most of which doubles-up as excellent single track terrain for mountain biking. 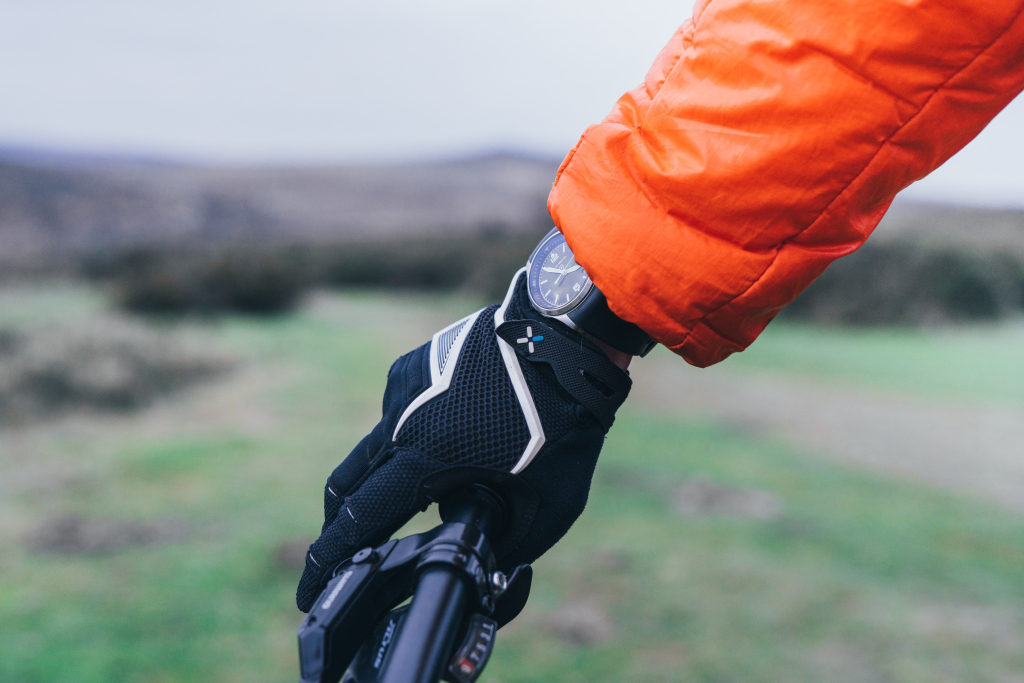 Routes range from the fairly gentile and picturesque to extremely rocky and technical, with one famous 24km loop that charts the northeast of the park boasting technical sections that include the slightly worrying ‘Widowmaker’.

Coffee ingested at a nearby fuel station (the G63 owner’s most frequented spot) and the hulking frame of the G63 parked up at the foot of one of Dartmoor’s many granite Tors, we carefully unpack the two mountain bikes, cycling gear and camera kit that we’ve somehow managed to squeeze into the boot for a quick warm-up blast. 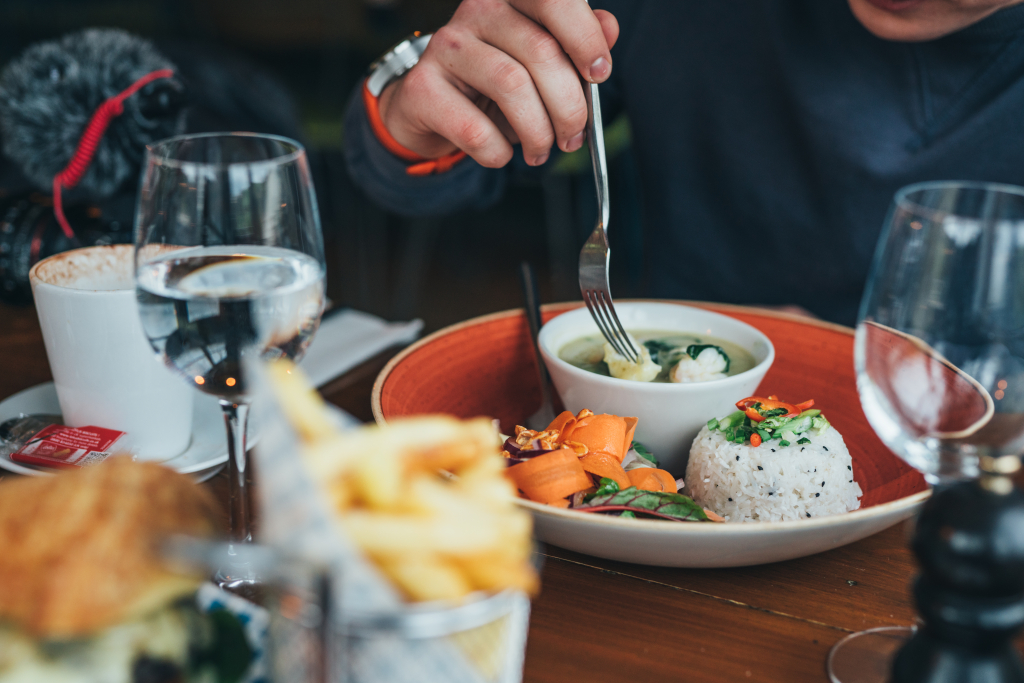 Despite its luxurious cabin and modern infotainment tech, the latest G-Wagen retains the brilliantly utilitarian side-hinged rear door, which swings open with all the heft of a Hollywood bank vault and allows easy access to the rubber-lined rear.

With bikes assembled, we pick out a vague route that works its way up to a stack of ancient granite and then disappears into the bracken for a brief technical downhill section, only to climb again at the next peak. 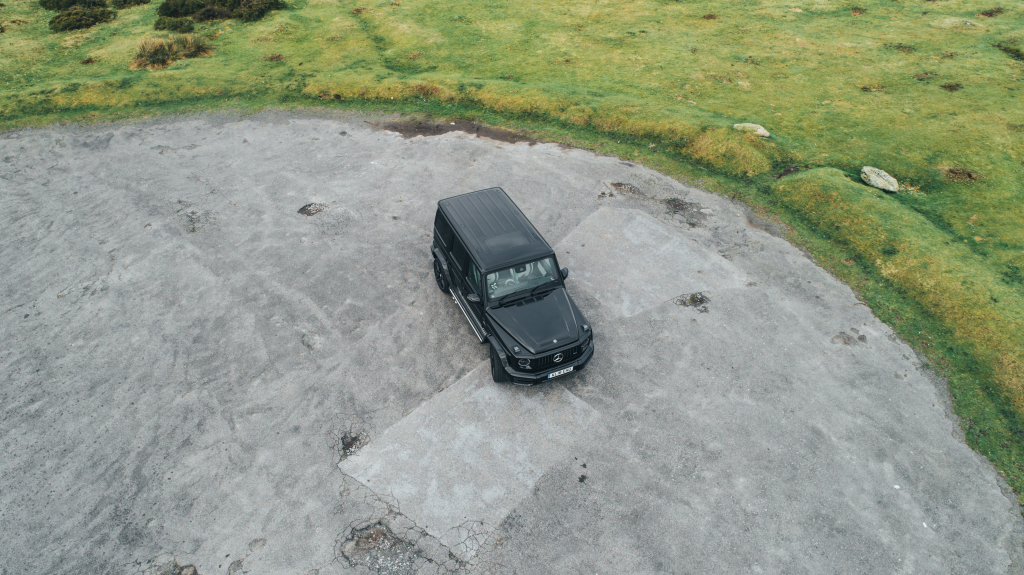 It’s fairly easy stuff but acts as a fun and fast warm-up for a longer route that’s planned in the northeast corner of the park.

Ride into the dying light

Despite Dartmoor’s surplus of unadulterated greenery, there is very little opportunity to test out the G63’s off-road credentials. 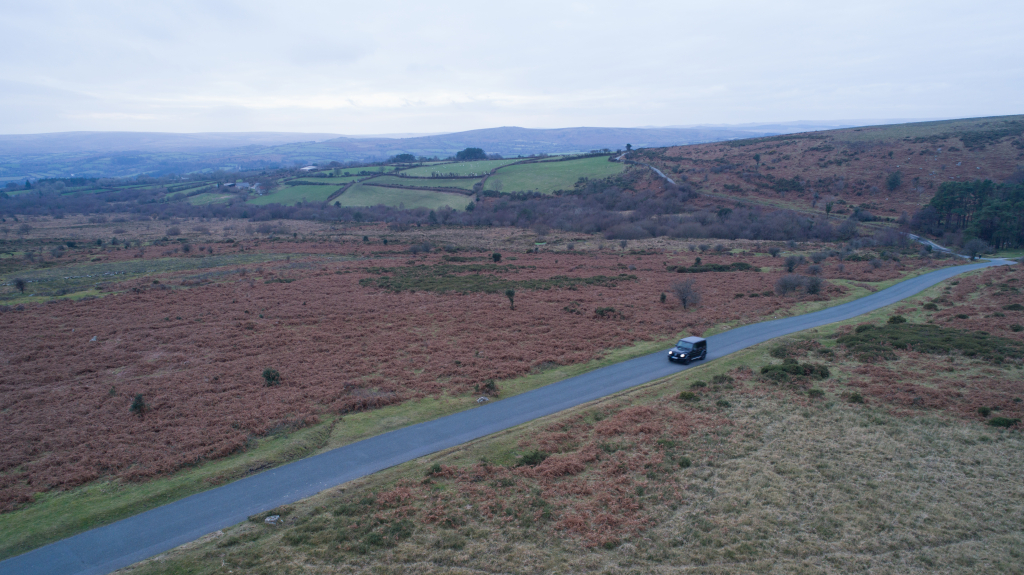 With a complex array of mechanicals (including locking differentials and a low-range gearbox for anyone interested), this ex-military machine is unsurprisingly impressive when the going gets tough.

In spite of the huge engine, ghetto fabulous 22-inch rims and twin side-exit exhausts, this AMG-tuned model will still happily climb a mountain and wade through the odd ford when it’s not drag-racing Lamborghinis. 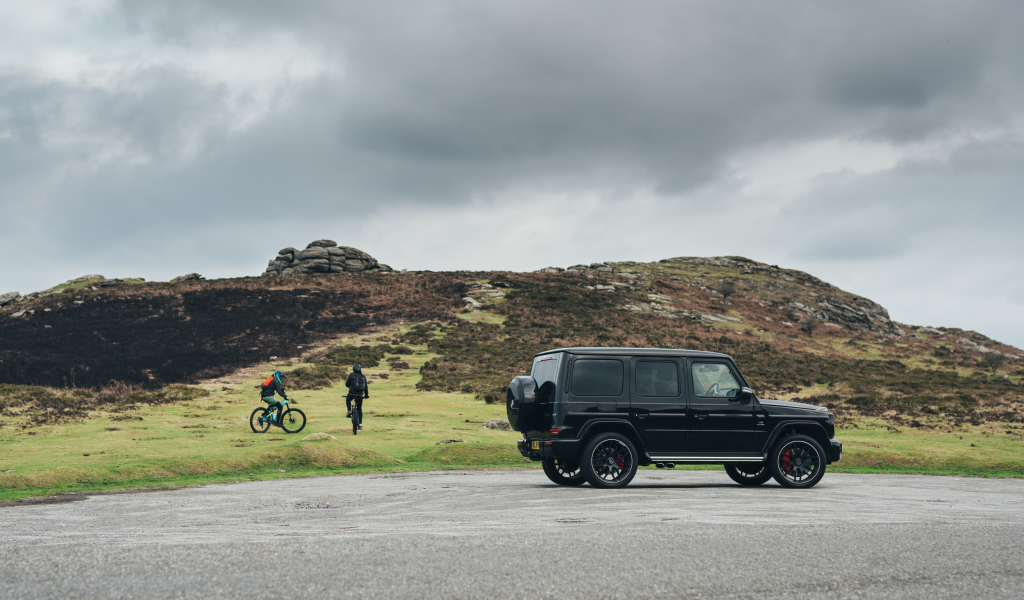 But a quick Google search for ‘green-laning in Dartmoor’ only throws up a news story about a mud-plugging enthusiast’s recent arrest for illegally chewing up land that’s designed for walking boots, not knobbly tyres.

“In spite of the huge engine, ghetto fabulous 22-inch rims and twin side-exit exhausts, this AMG-tuned model will still happily climb a mountain”

So we wolf down a hearty pub lunch and set off from North Bovey on a longer, more demanding mountain biking trek that takes in Manaton, Lustleigh and Hunter’s Tor. 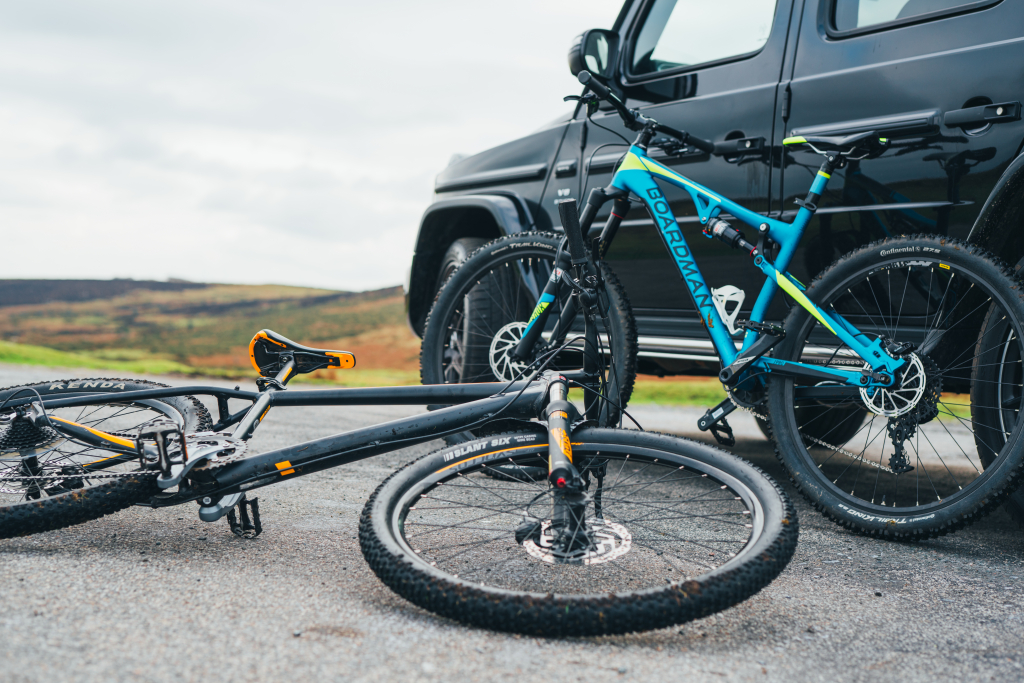 It is bitterly cold and blustery, which means we barely see a fellow human being all day and the wintry weather has turned large parts of the route into slushy bog, which requires alloy frames to be slung over shoulders and hiked to the next waypoint on my bike computer’s GPS.

The riding is demanding, with peak elevation of 1,583ft at one point, and the weather often makes exposed sections eye-wateringly unbearable, but the tricky rocky terrain keeps the mind sharp. 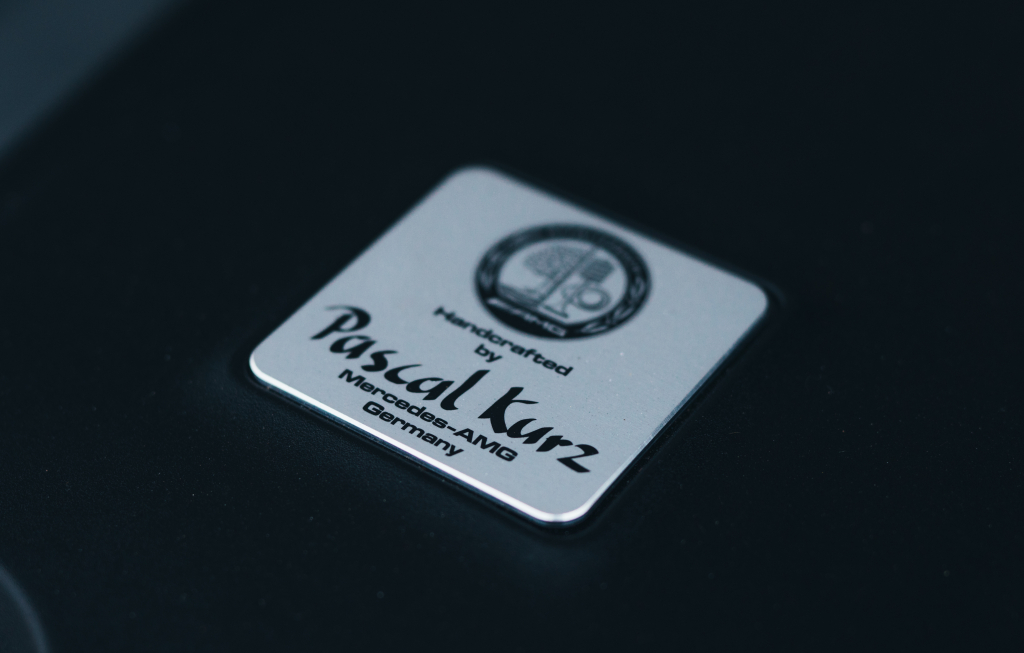 Despite some fun, heart-pumping moments, the sight of the G63’s menacing black paintjob is a welcome one, as fiercely aggressive bum warmers and plush, cosseting seats are just what the doctor ordered.

With only a shard of daylight remaining, it seems foolish not to make the most of Dartmoor’s blissfully empty B-roads. The AMG G63 might roll around corners like a wooden dinghy in a Force 5 storm, but its straight-line speed is hilarious. 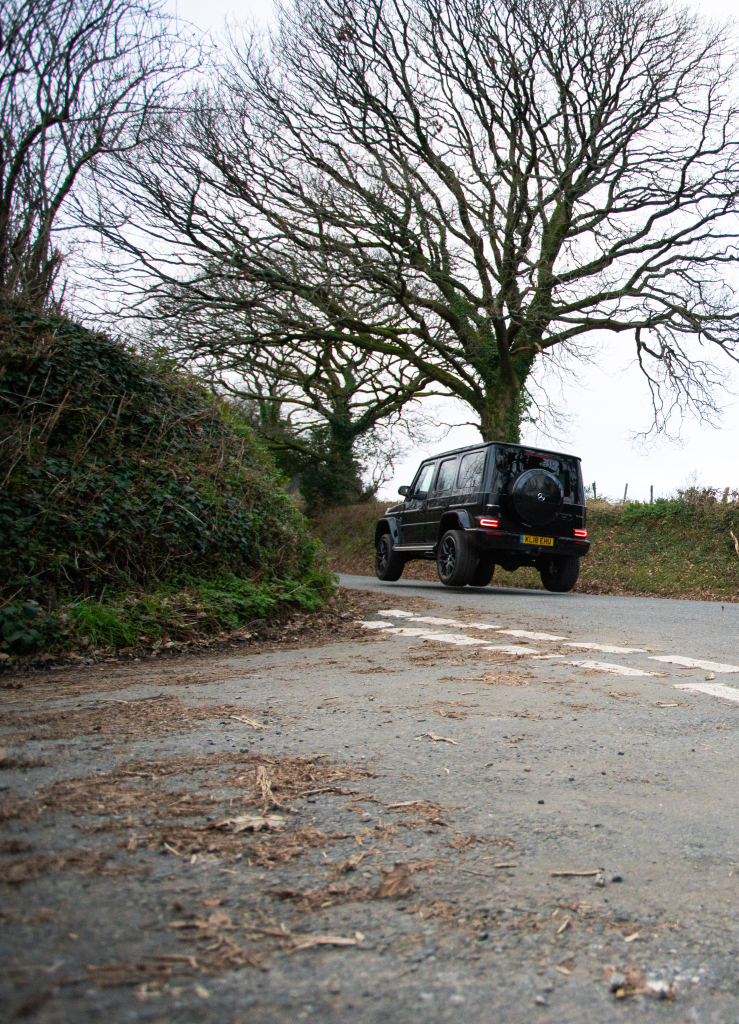 Official figures state that the horsepower is enough to rocket the 3.5-tonne beast from 0-62mph in just 4.5-seconds, but the accompanying cacophony of engine note and thumping automatic gear changes make it feel even quicker.

Sorry officer, but we had a reputation to uphold.

A version of this appeared on Vice Media’s Amuse travel channel and DRIVETRIBE.

Through the Lens: Mercedes-Benz Museum