The hulking pick-up truck I am driving won’t fit in the car park of this quintessentially quaint Welsh Bed & Breakfast.

It managed to squeeze through a low, flint-lined tunnel only to be bamboozled by an off-camber and decidedly jam-packed parking area. There’s just not enough room to swing the hulking goliath into a space without taking off a bumper or two.

It’s also dark and I’ve been driving for around four hours, so I dump the thing in a hatched area and decide to deal with it in the morning. 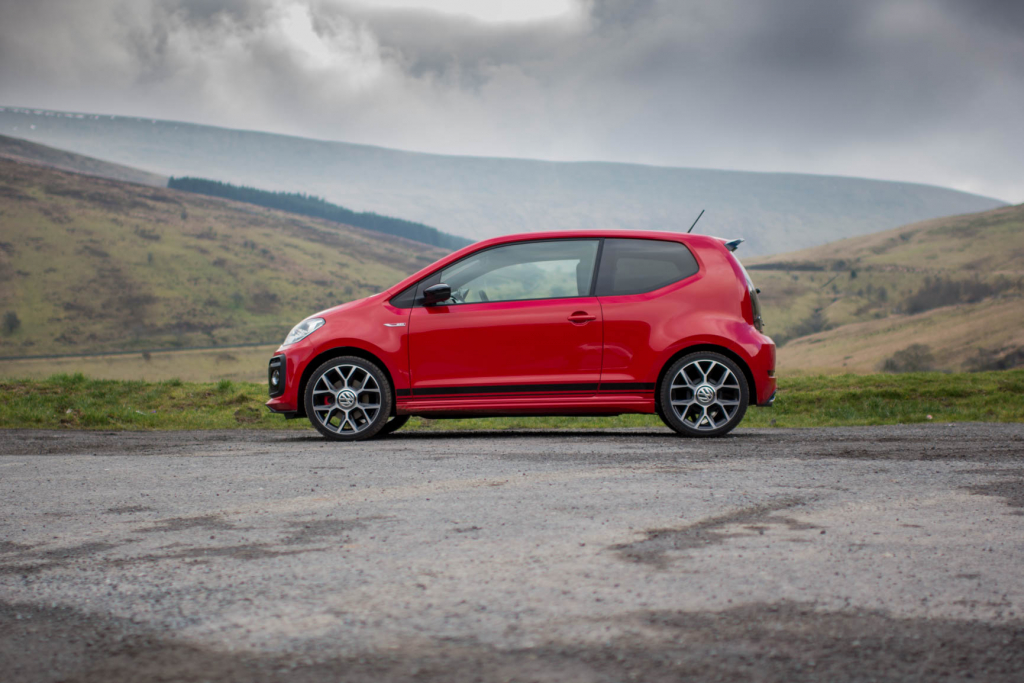 After retreating to a very sweaty room with the world’s most powerful radiators, I reach for the window and watch a couple of VW staff parking up a row of VW Up! GTIs.

Despite the presence of an illegally parked Mercedes X-Class, they manage to deploy the diminutive hot hatches into spaces with swift and elegant precision.

A sudden pang of regret hits me in the stomach and it’s not because I realise the pick-up truck looks big and stupid in its abandoned state, it’s a stab of pain that comes with memories of a former car. 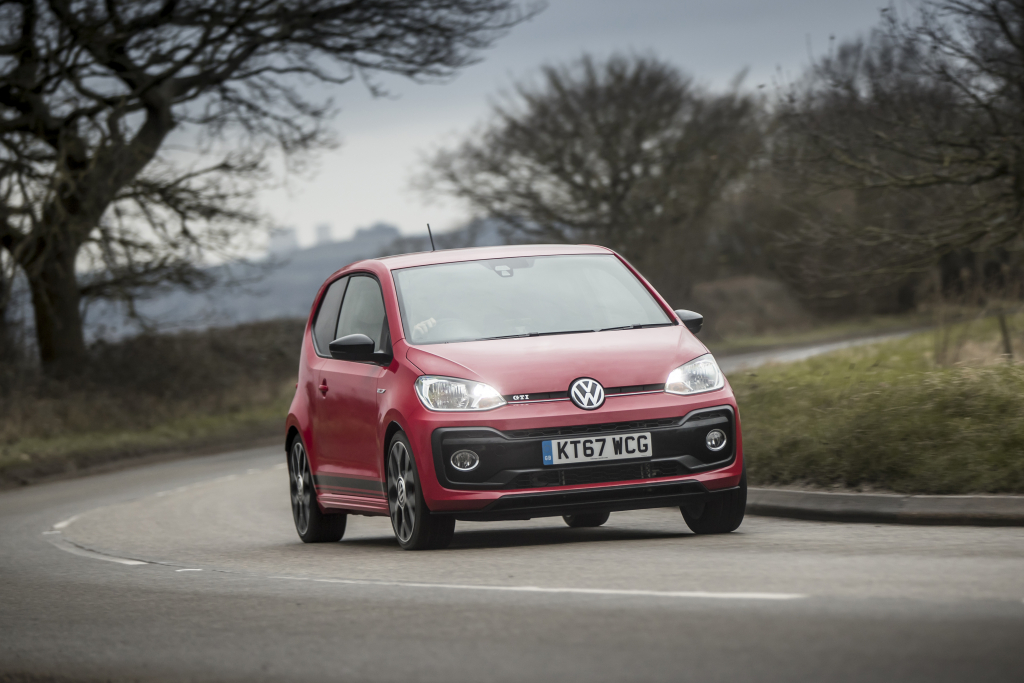 I used to own a Renault Twingo RS and I absolutely adored it. I remember sliding into parking spaces barely big enough for a motorcycle, skidding around roundabouts and using the handbrake way too much, but it was useless at pretty much everything else.

Motorway journeys were deafening and painful, it got beached on speed humps and the steering would regularly come out of alignment with the faintest whiff of a pothole.

Unfortunately, the modern RenaultSport Twingo is just wrong on a number of levels, meaning there’s space in the market for a devilish little hot hatch.

Say hello to the Volkswagen Up! GTI.

The journey begins in Crickhowell with a hearty breakfast, a breathalyser test (VW don’t take any chances) and a map of the Brecon Beacons.

The keys to a brand spanking new Volskwagen Up GTI! are also tossed my way and the rest of the day is free to explore what both the machine and the Welsh mountain ranges have to offer.

Without the usual route guidance to tell me what to do, I quickly call up Google Maps on my phone and scan the local area for some ribboning tarmac to play on.

The interior of the Up! GTI is delightfully simple and with prices starting at £12, 955, it is naturally light on the niceties. 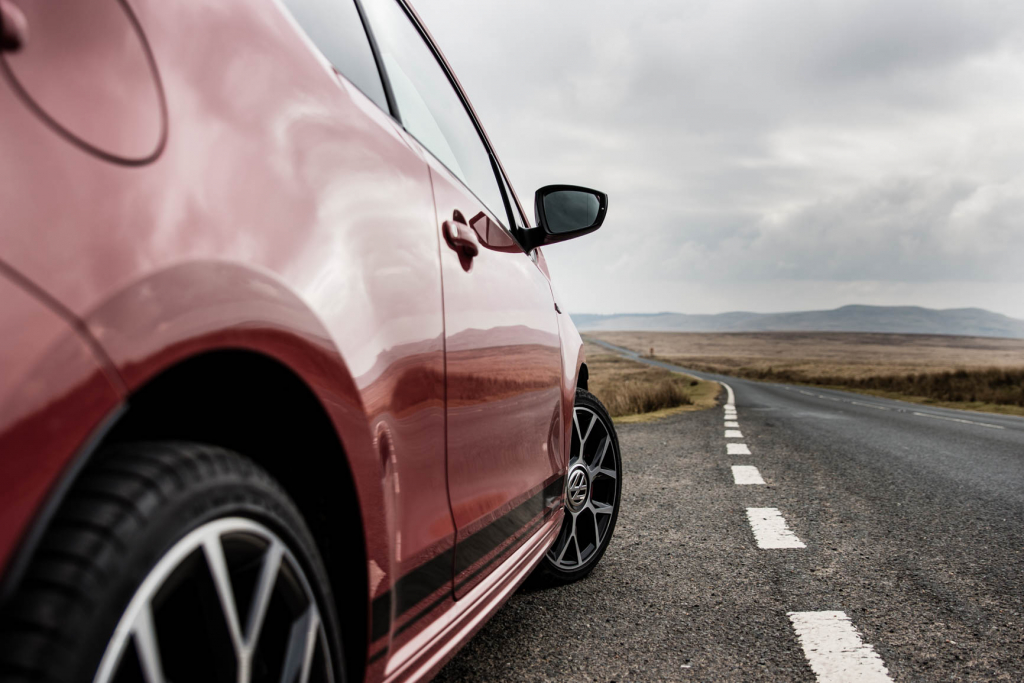 There’s no infotainment screen to distract, there’s no digital dashboard, no fancy air conditioning dials and no electronically assisted seating.

There is a little holder for a smartphone and a five-inch Composition Colour system that takes care of Bluetooth phone pairing and some radio but that’s all many will ever need. 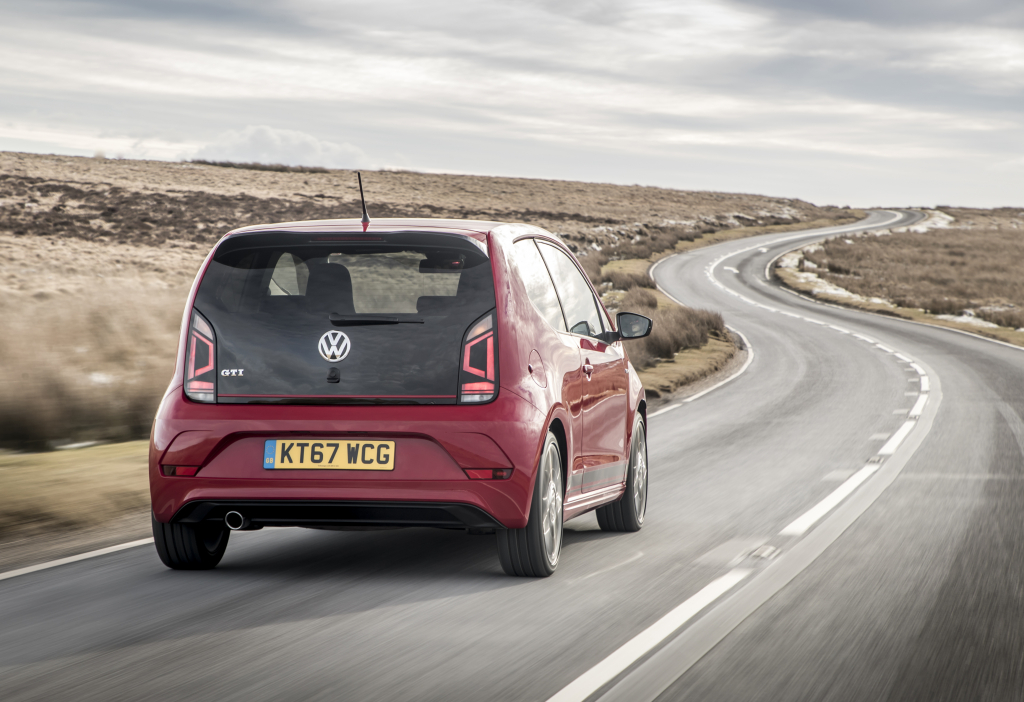 Slide the six-speed manual gearbox into first and ease off the ludicrously light clutch (it also has an extremely high biting point) and the endearing Up! GTI eagerly claws at the road beneath it.

Coming Up! for mountain air

It takes just five minutes to realise this little firecracker is good enough to sport the iconic GTI badge.

The roads outside Crickhowell soon begin to twist and turn their way into beautiful Welsh countryside and the B4560 Llangynidr Road provides a series of ribboning switchbacks upon which to push the Up! GTI’s grip to the limits.

Its featherweight frame feels positively glued to the road underneath and the little 1.0-litre turbo engine fizzes with every stab of the throttle. 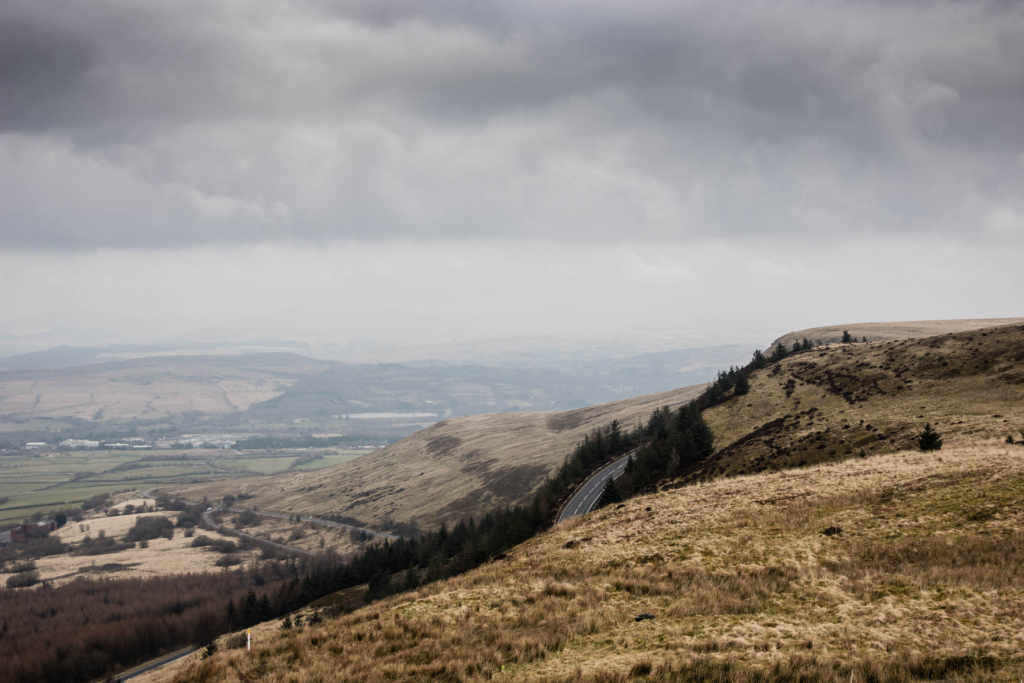 I’ve driven these roads many times in the past, typically in larger, more powerful machines, but it’s impossible not to love this baby GTI’s miniscule footprint and the way it allows the driver to attack tight turns with almost psychotic abandon.

With the twisties already dispatched, I head along the A465 towards the village of Rhigos, which does its best impression of Spain’s Ronda Road, only with more rain… and sheep.

Typically, these mundane schleps along dual carriageways tend to be the undoing of tiny city cars, as their underpowered engines and shortage of gears often make cruising painful. 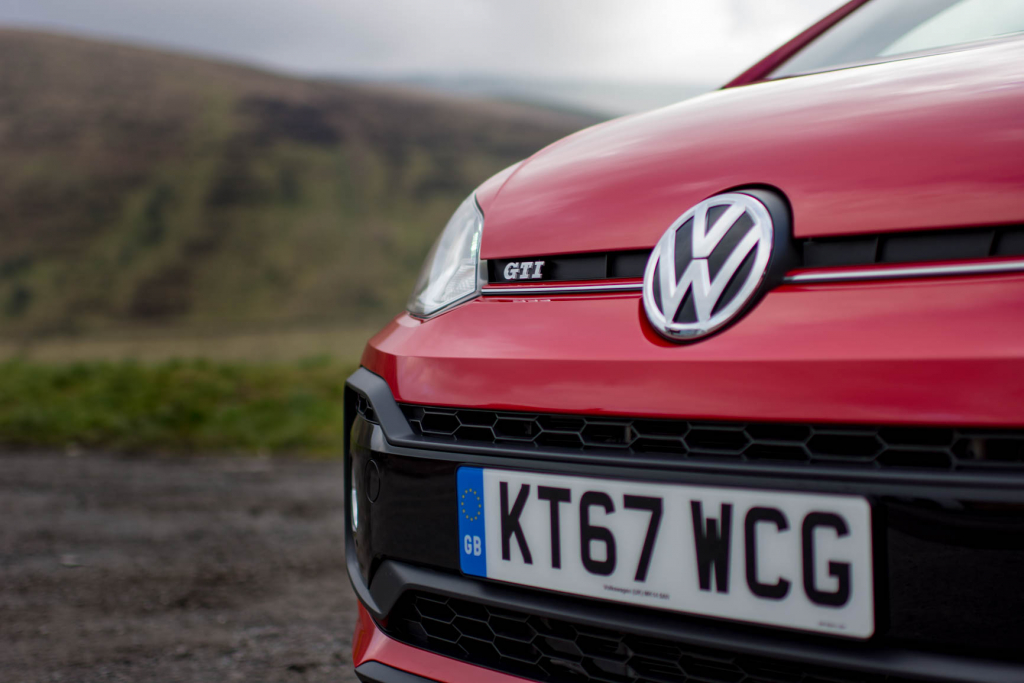 Not so with the Up! GTI. It feels like a much more mature Volkswagen product and happily sits at 80mph in top gear, with enough power to propel it past slower traffic should it need to.

It’s also pretty quiet inside the cabin the ride is extremely well judged for such a sporting model.

Granted, we’d probably like a few more creature comforts if we were to use this for the daily commutes but the sound system is good, it features DAB radio and there’s always a smartphone packed with tunes and podcasts if all that gets too boring.

The villages of Rhigos, Treorchy, Maesteg, Tonyrefail and Talbot Green are linked by a complicated network of roads that coil and weave their way through valleys, over hilltops and into deep dales.

Pick the right vehicle and it’s possible to spend hours, if not days, enjoying this magnificent stretch of Tarmac, which just so happens to interconnect to form the perfect test circuit for any new car.

The Up! GTI feels very at home here, and although it’s not entirely alive and sparking with feedback, it does inspire plenty of confidence through every corner. 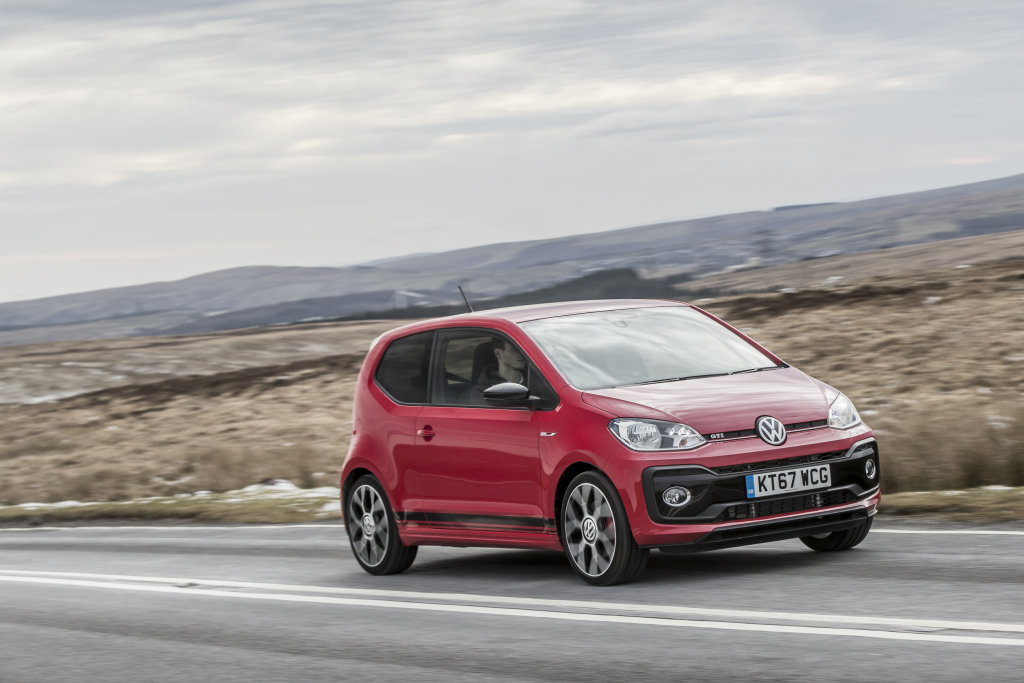 VW’s typically grown-up approach to car design means things rarely get silly or dicey but that’s not to say it isn’t entertaining. Plus, the finished package is far easier to live with on a daily basis than the scant few rivals it competes with.

Arguably the Renault Twingo GT is up there but the French manufacturer really missed a trick with the latest generation and it’s difficult to label it with the hot hatch badge at all.

The previous generation (that I owned, loved and eventually divorced) would have been a much better suited competitior, as its RenaultSport chassis and suspension set-up saw it squirm, wriggle and deliver bucket loads of feedback to the driver.

“Welsh whisky, you’ve got to be kidding!” we hear you scream at your computer screens, but the fact of the matter is, Penderyn is the first whisky distillery in Wales in over a century.

Set up by a group of drinking buddies, this picturesque distillery of whisky and other spirits makes the most of the abundant supply of local stream water and also features a unique copper single-pot still designed by Dr David Faraday, a relative of the great 19th-century scientist Michael Faraday.

Naturally, the chaps have gathered numerous awards since launching the site in 2004 and it’s well worth visiting for a number of reasons.

Firstly, they offer a mean Whisky & Chocolate tour, which pairs the best single malts with handmade artisan chocolate, as well as masterclasses that offer fully interactive experiences and an in-depth look into the making of the award-winning single malt. 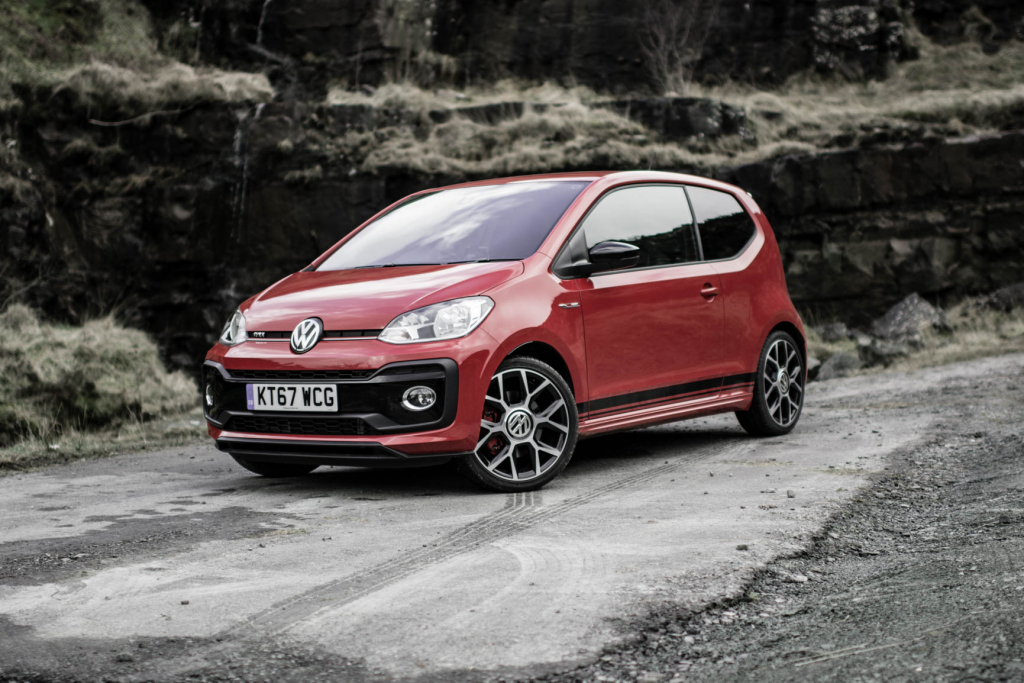 But for now, the Up! GTI inhabits the useable micro-hot hatch space on its lonesome and with prices starting at £13,750, it feels like an absolute steal.

After a day of pummelling some of the sweetest roads Wales has to offer, it is time to hand the keys back to Volkswagen and embark on the long journey back down to the south coast.

In Askews Bakery, arguably Crickhowell’s finest purveyor of cakes and other baked goods, I catch up with the Volkswagen PR team and talk soon turns back to its baby firecracker.

It turns out that current PCP and contract hire deals make it possible to snare an Up! GTI for around £200 a month through VW itself, while rival lease deals can be found for even less with a bit of digging. 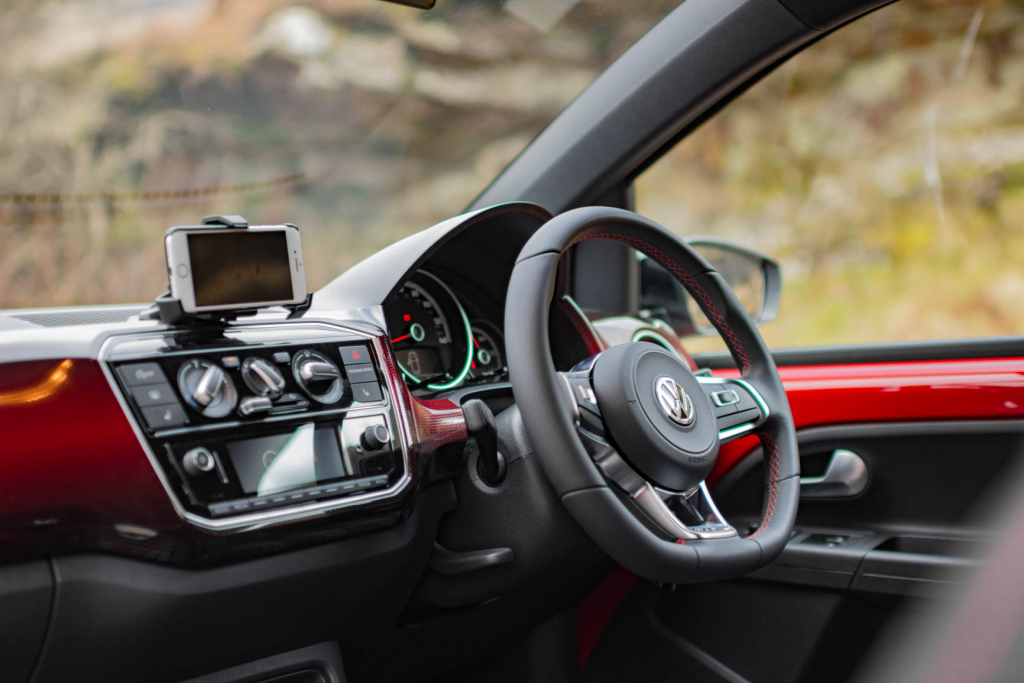 That thought bounces around my mind on the long haul back home and I can’t help but thinking the younger version of myself would be sorely tempted.

As an everyday proposition that delivers on the thrills and offers levels of practicality larger and more expensive cars struggle to match, it is pretty much faultless.

I just wish the Up! GTI was available when I invested in the Twingo RS, perhaps the relationship would have lasted a bit longer.