Let me take you back to the year 2012, when the world wasn’t under the thick, black cloud of a global pandemic and automotive manufacturers were very much still obsessed with the internal combustion engine.

In a move that seemed to go against the mood of the time, Renault unleashed the production version of its tiny electric microcar, while the world was busy fawning over the Bugatti Veyron Grand Sport and an updated Aston Martin Vantage.

The light quadricycle, with its diminutive footprint and unique in-line seating arrangement, was primarily designed for warmer European markets, where teenagers as young as 14 could hop aboard and explore the roads on little more than a fairly basic introductory driving licence. 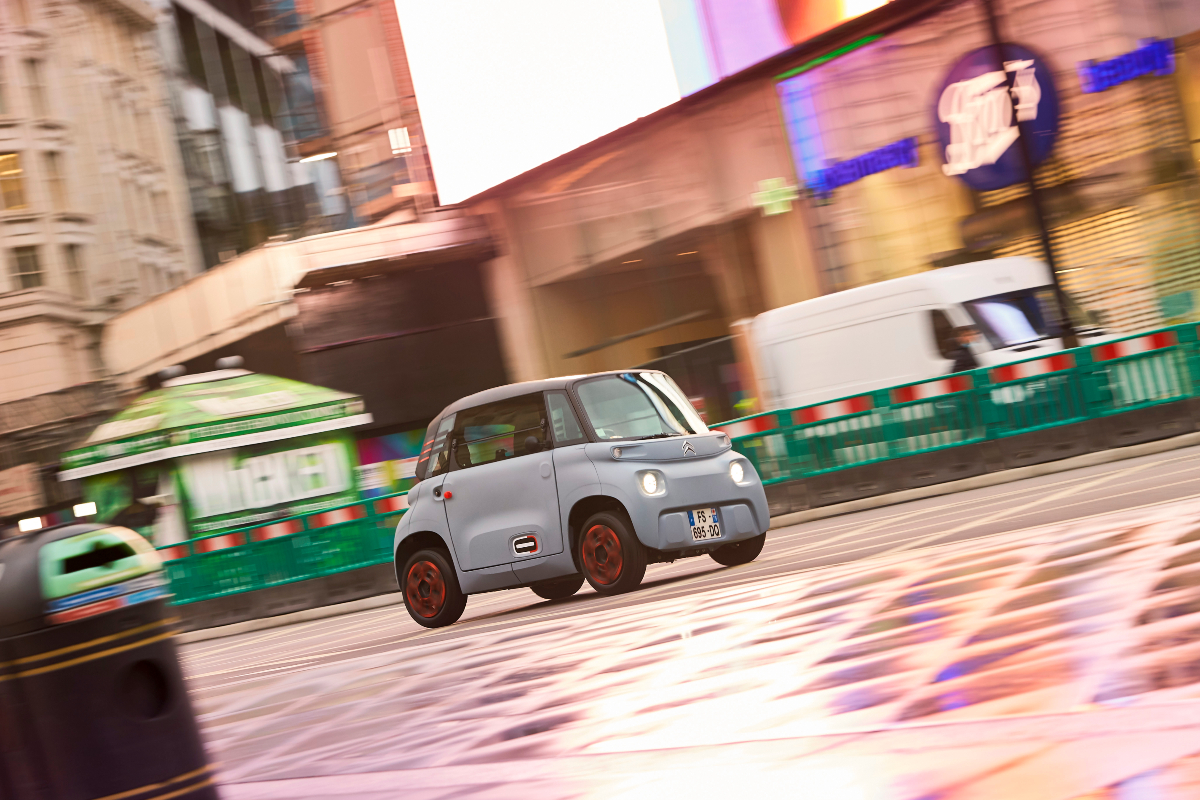 In a hilarious sign of the times, the little Twizy was actually the best-selling plug-in vehicle the year it was launched, with many finding homes in sunny destinations, such as the south of France and  Rome.

But even in a cold, damp Gosport, where I was a motoring journalist for a large news website at the time, the tiny Twizy still made a lot of sense. We ran one as a long-termer for around six months and it rapidly became the vehicle of choice for a quick blast to the shops on the lunch run or a scoot to the coffee shop for a caffeine fix.

Despite its lack of doors and ultra-basic set-up, it was bags of fun to drive, cost pennies to run and always started a conversation with fellow motorists in the car park of Waitrose. 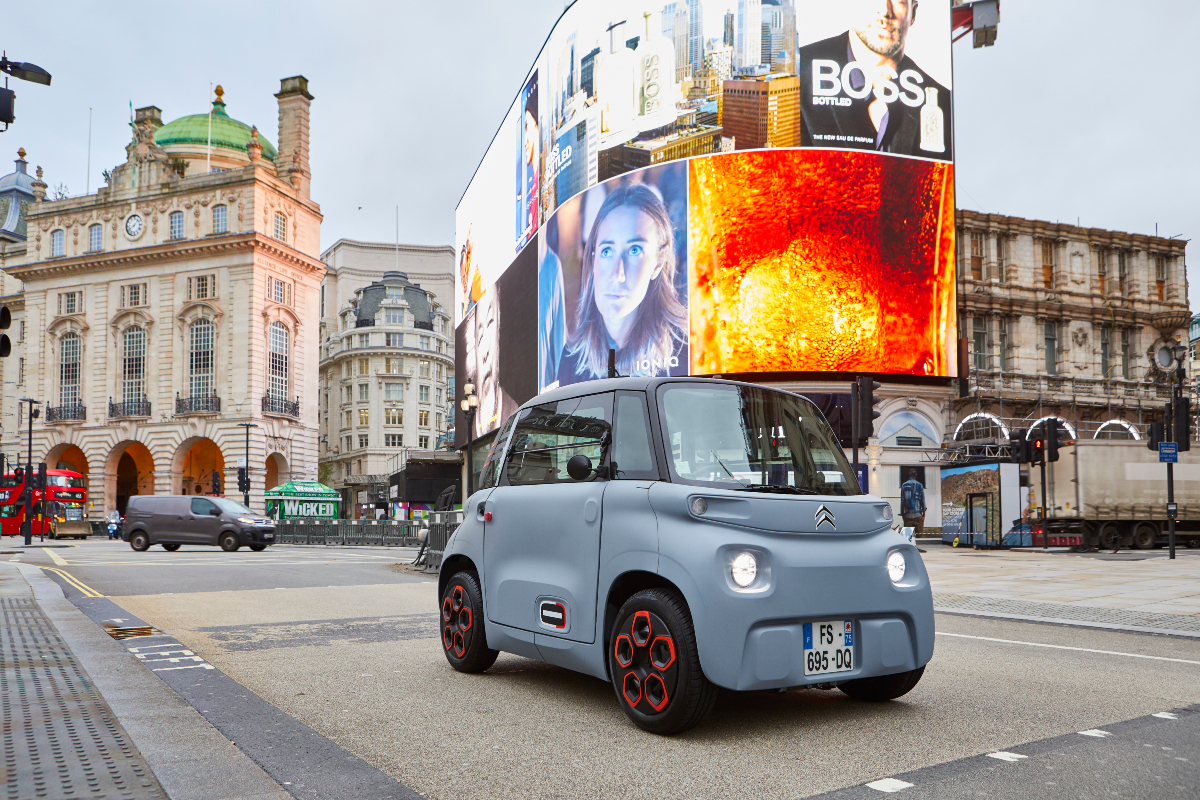 Fast forward to 2020 and Citroen is essentially revisiting the same recipe but adding its own distinct flavours. The Ami, an equally minuscule vehicle that’s powered by 5.5kWh battery pack and a 6kW electric motor, exists purely as a low-cost mobility solution for those busy towns and cities where the car is no longer a welcome sight.

With a range of around 47 miles and a top speed of just 30mph, its main mission is to get folk from A to B in relative comfort and speed. It is predicted that most journeys in an Ami will be less than five miles and in Paris, where the vehicle is currently operating in a car sharing scheme, it is predominantly used to breeze from one part of the city to another.

Because of this, it can only be charged via standard domestic plug socket, the cable for which is physically attached to the car and stashed within the doors. But Citroen says that the batteries will hardly ever be run dry and, in Paris at least, it’s merely a case of constantly topping up power supply for the next person to use it. 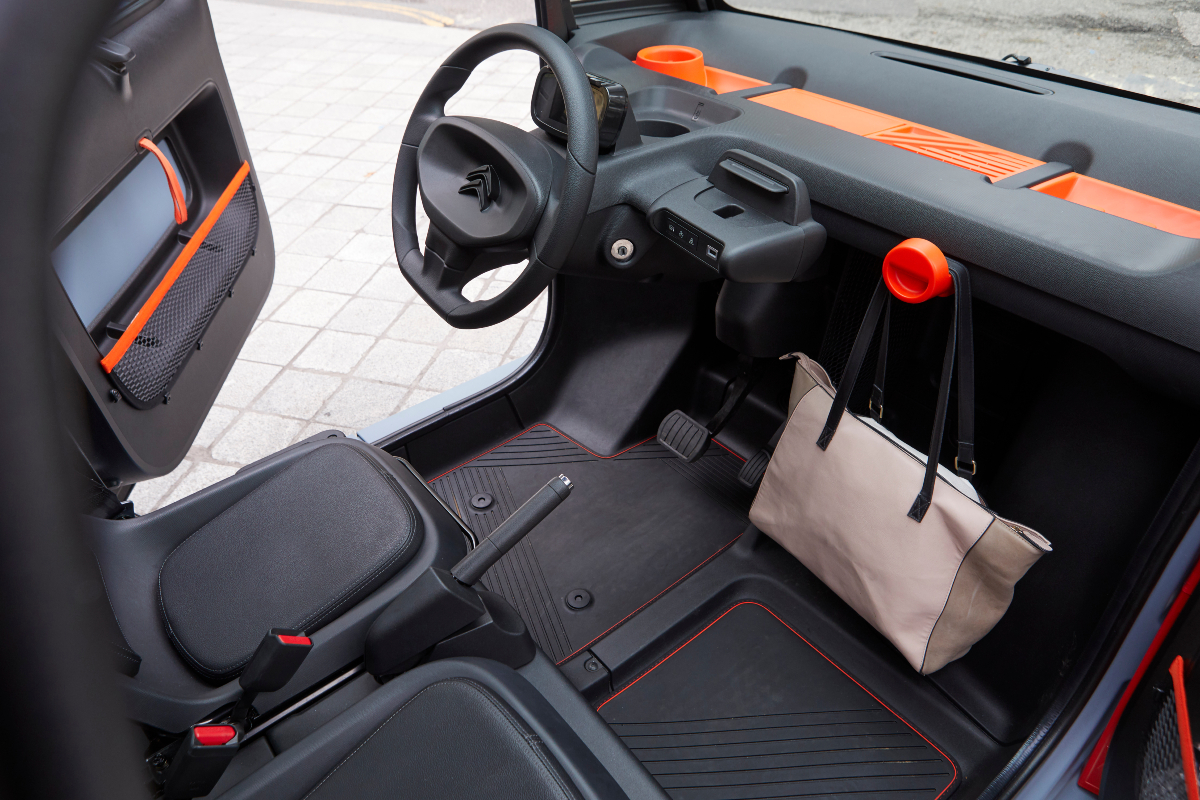 Built to be bashed

While gently rolling around an eerily empty Leicester Square in the Ami recently, a man tapped on the flimsy window as I was stopped at traffic lights and politely asked how he could determine which end was the front. “The rear has red lights,” I replied sympathetically, as it’s really not easy to tell if the Ami is coming or going.

This is because Citroen has designed and built this car to be as cost efficient as possible, which means the front and rear bumpers are identical. There’s also only one door design, meaning the driver’s side opens backwards in a ‘suicide’ fashion and the passenger’s is hinged in the normal way.

Clamber inside the spartan cabin and there’s really not much to write home about. A steering wheel, a single stalk for windscreen wipers and a horn, some cubby holes for stashing a smartphone and three buttons next to the seat that operate the car. 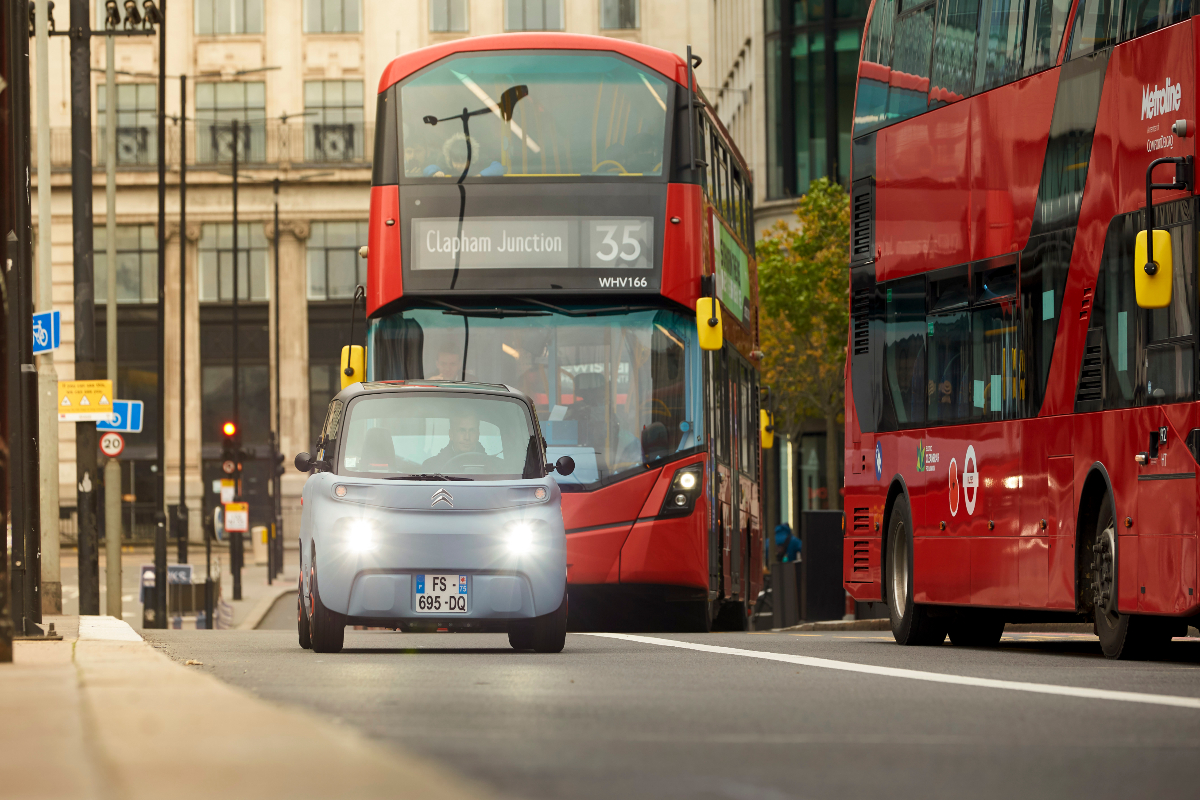 Plastic is the material of choice here and if the surface isn’t finished in a distinctly utilitarian flavour, it’s made of glass. Loads and loads of glass. The result is a small car that feels surprisingly spacious when sat inside.

Unlike Renault’s madcap, motorcycle-inspired Twizy, two people can actually sit side-by-side in Ami, with enough room in the passenger footwell for an airline cabin suitcase and a little space behind the seats for anything else.

It’s immediately obvious that Ami was designed from the ground-up to be a cost saving exercise, as very little inside majors on ergonomics. The seats are firm, there’s an awkward reach for the webbing strap that releases the door handle and the holder for a smartphone will happily fall off its holder unannounced. But to think of Ami like a regular car is pointless, because this is a vehicle with car-sharing and mobility in mind, although France has already received some 2,000 orders from interested private owners. 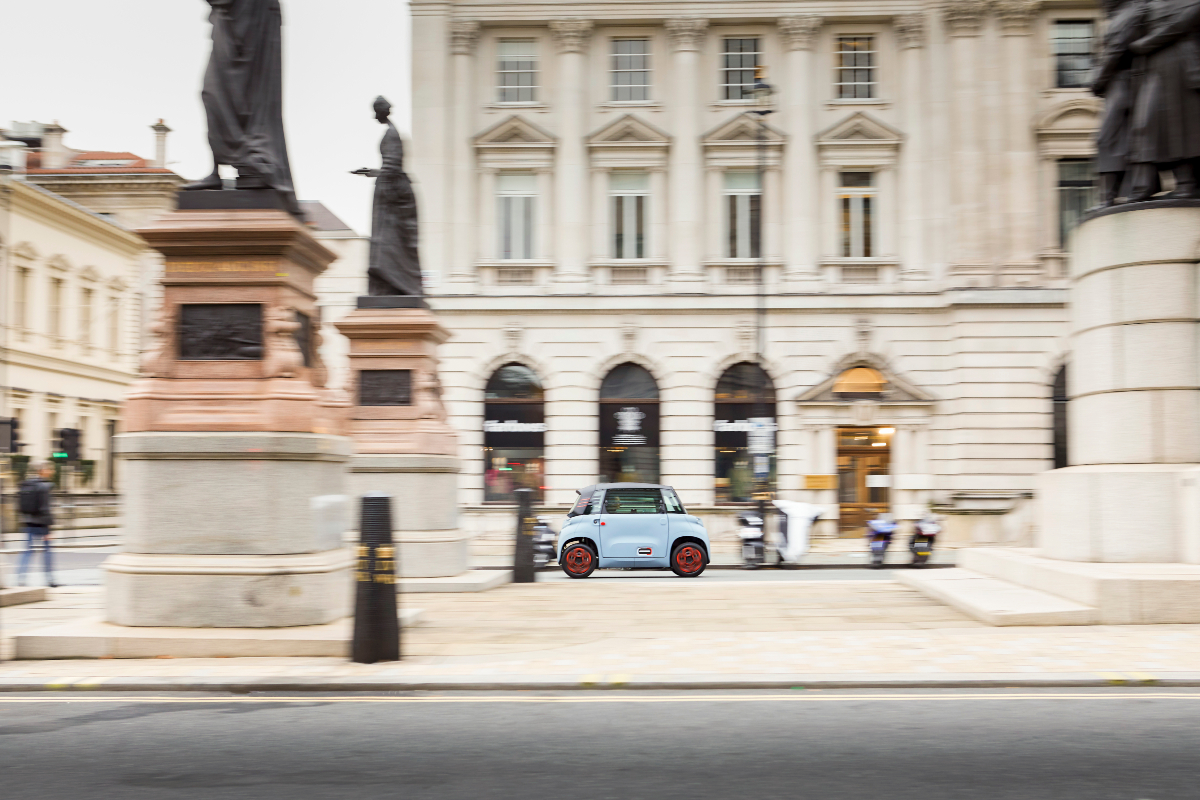 Although the Ami can be driven by 14-year-olds in France, the same won’t apply here, but that won’t stop big kids from having an absolute hoot behind the wheel. The top speed is a mere 30mph, but Ami picks up pace quickly and the tight turning circle makes it perfectly suited for navigating tricky roads and annoying underground parking facilities.

There’s a fair amount of bumping around inside and the firm seats are tough on the posterior, especially when bouncing over some of the terrible roads in the UK’s capital. But that can be forgiven when you realise this is just a mobility solution that costs €19.99 per month in France (with an initial payment of €2,644).

Use Ami as part of a car-sharing program and it costs just €0.26 per min to move freely, sheltered from the rain and without having to press your face into someone’s armpit on a packed tube train. after a few miles in the cutest car around, it soon becomes apparent why private buyers might want to spend €6,000 to own one. Like the Twizy that came before it, it’s the perfect machine to pop to the shops in. 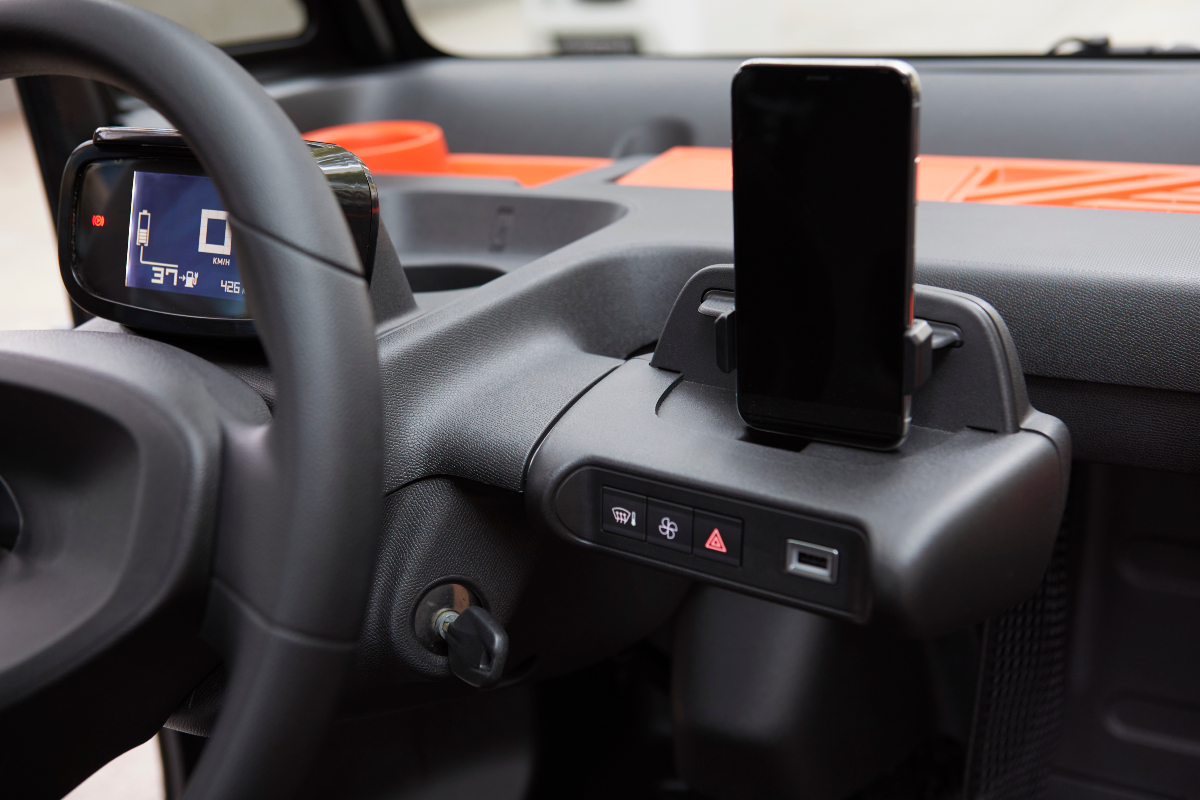 Above all else, people like it. I mean, they really like it. After a few of hours in London, I lost count of the number of pedestrians who gave it the thumbs up, or the tourists how stopped to take a video or picture on their smartphones.

Despite the fact that Citroen is currently undecided about bringing Ami to the UK, there’s already a groundswell of interested parties here and with many towns and cities rapidly becoming near-impossible to drive in, this could be exactly the solution many are looking for. 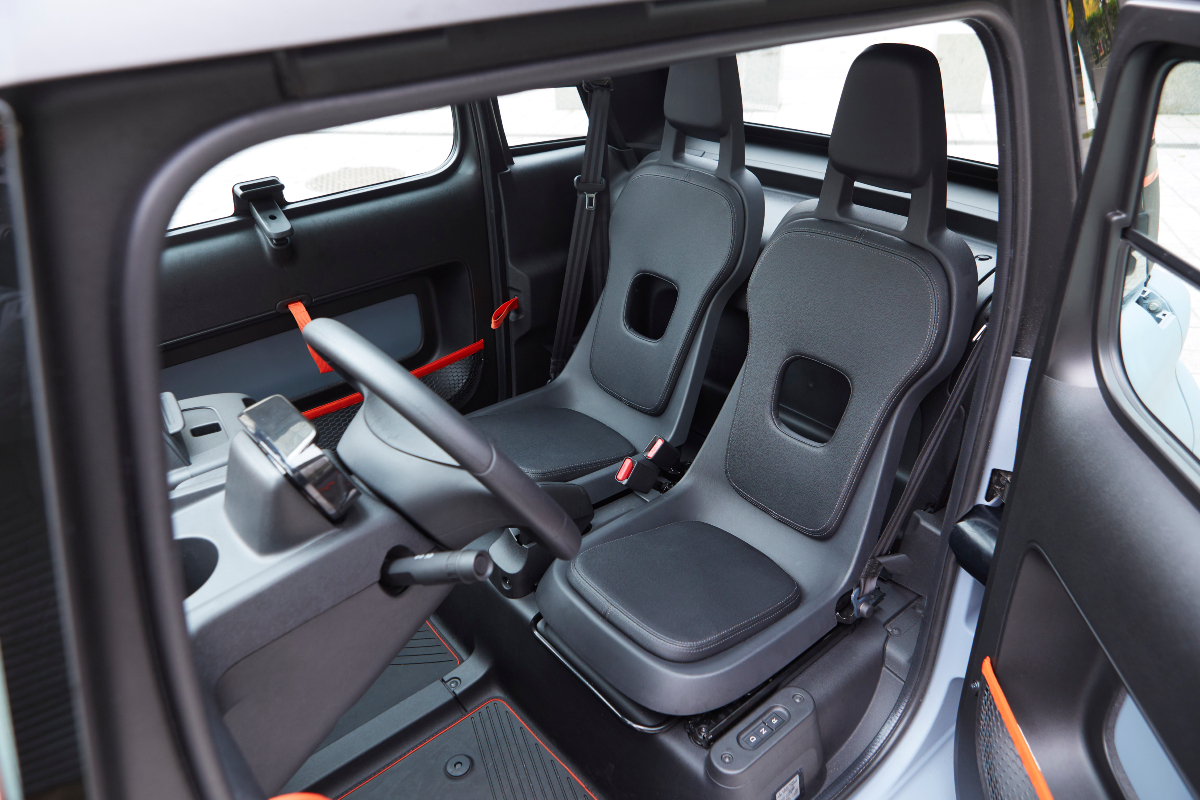