Weirdly, the UK is one of Europe’s consumers of convertible vehicles, with around one drop-top machine for every 75 people living here. That’s crazy, if you think about it too hard, especially considering somewhere like Surrey only receives around 1,600 hours of sunlight a year. Lisbon, on the other hand, receives 3023 out of a possible 4383. Let the maths sink in. It doesn’t make sense.

Regardless, the UK’s love affair with the convertible means we are treated to very special things like this: Aston Martin’s latest Vantage Roadster – the soft-top convertible version of the British marque’s absolutely stunning Vantage coupe, arguably one of the best looking sports cars money can buy.

I’ll admit early on that past encounters with Aston Martins have been about as tumultuous as the brand’s recent history, with all of the cliche reliability issues ringing true over the various test drives and loans I have been lucky enough to experience over the years. But this is a new chapter for the brand and input from Mercedes-Benz, while derided by the diehard, is really only a good thing for the customer experience. 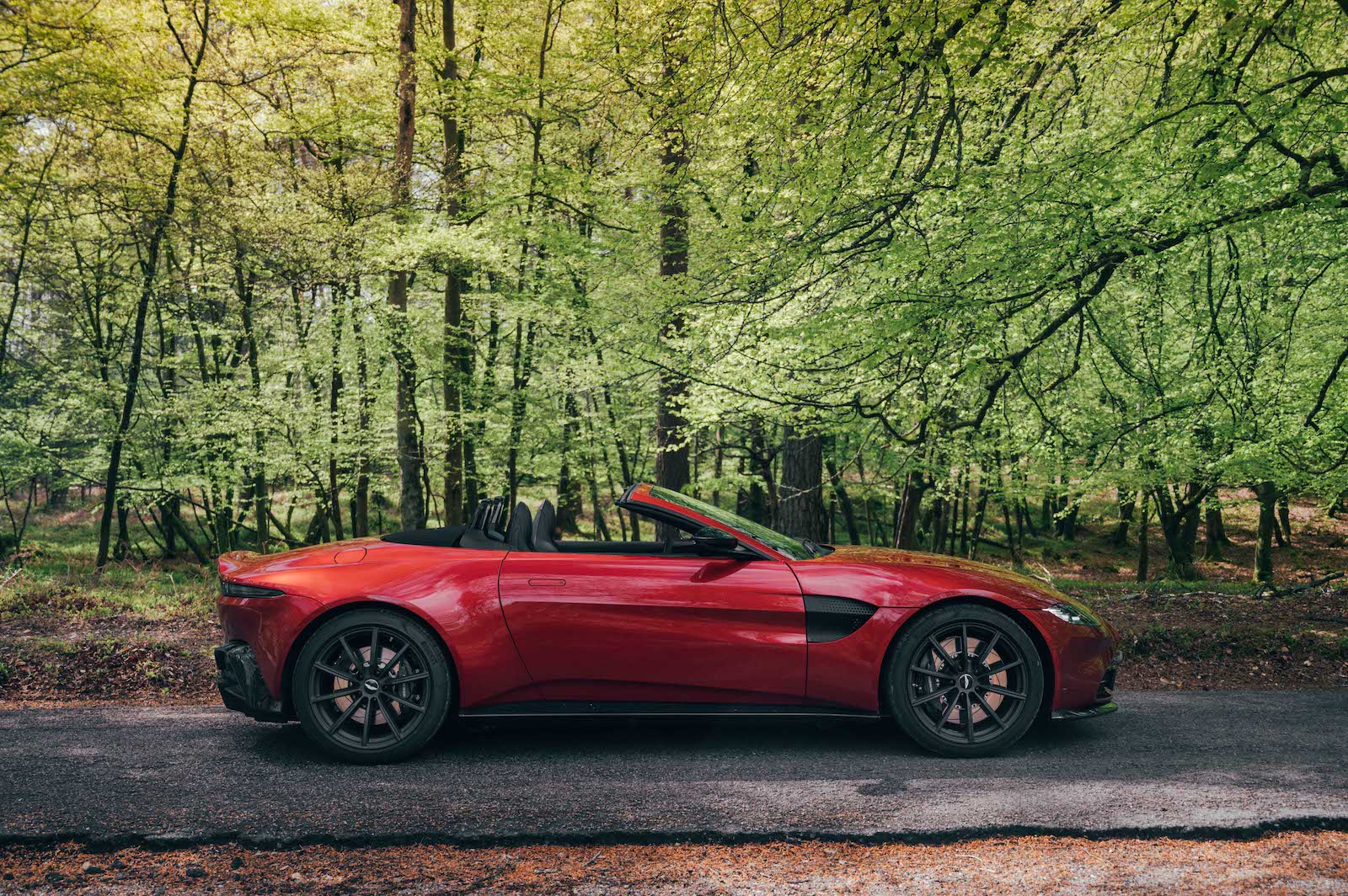 That’s important, because the latest Vantage Roadster costs the best part of £127,000 in its most ‘basic’ form. That’s a huge chunk of change and puts it directly in the firing line of some serious competition: the Porsche 911, Audi R8 and even the McLaren 570S Spider… at a push.

“Even when life is giving you lemons, the Aston smashes them to pieces and creates the sweetest beverage”

First impressions of the Roadster are, as you would expect, lasting. Design boss Marek Reichman and his team really did play their trump card with the latest generation of Vantage. It has all of the classic Aston hallmarks but feels far more taut and aggressive than anything that has come prior. The rear, for me at least, is perfection.

It is slightly more contentious at the front end, where the appearance of a gaping mesh grille divided opinion. It’s still a magnificent looking beast and Aston now offers the option of two different grille types. For me, it’s mesh all the way when paired with the more aggressive blacks and silver paint jobs, vaned if you want something a little more traditional.

Not only were the weather gods on my side for the duration of this loan, but it came at a difficult point of the year where a bit of old-fashioned ‘wind therapy’ would do a lot of good. A global pandemic, turbulent working conditions thanks to a global pandemic, a pandemic-related funeral… the list goes on.

Open the elongated door and crawl into the low slung cockpit, prod the oversized Aston Martin starter button and the Mercedes-AMG twin-turbocharged V8 barks into life. Bores will say it has no place in an Aston but it feels perfectly at home here, providing a soundtrack that more than suits the thuggish good looks.

Awkwardly, the switch for the convertible roof is on the door, next to the window controls and definitely nowhere near where it should be. But once found, it feels like a sin not to retract the soft top and let some of that exhaust note creep into the cabin.

Aston claims this swanky new roof opens in just 6.8 seconds (at speeds of up to 30mph) and closes again in around the same time. Let me just check my little book of car facts… that makes it one of the fastest up/down convertible experiences around. Or something. 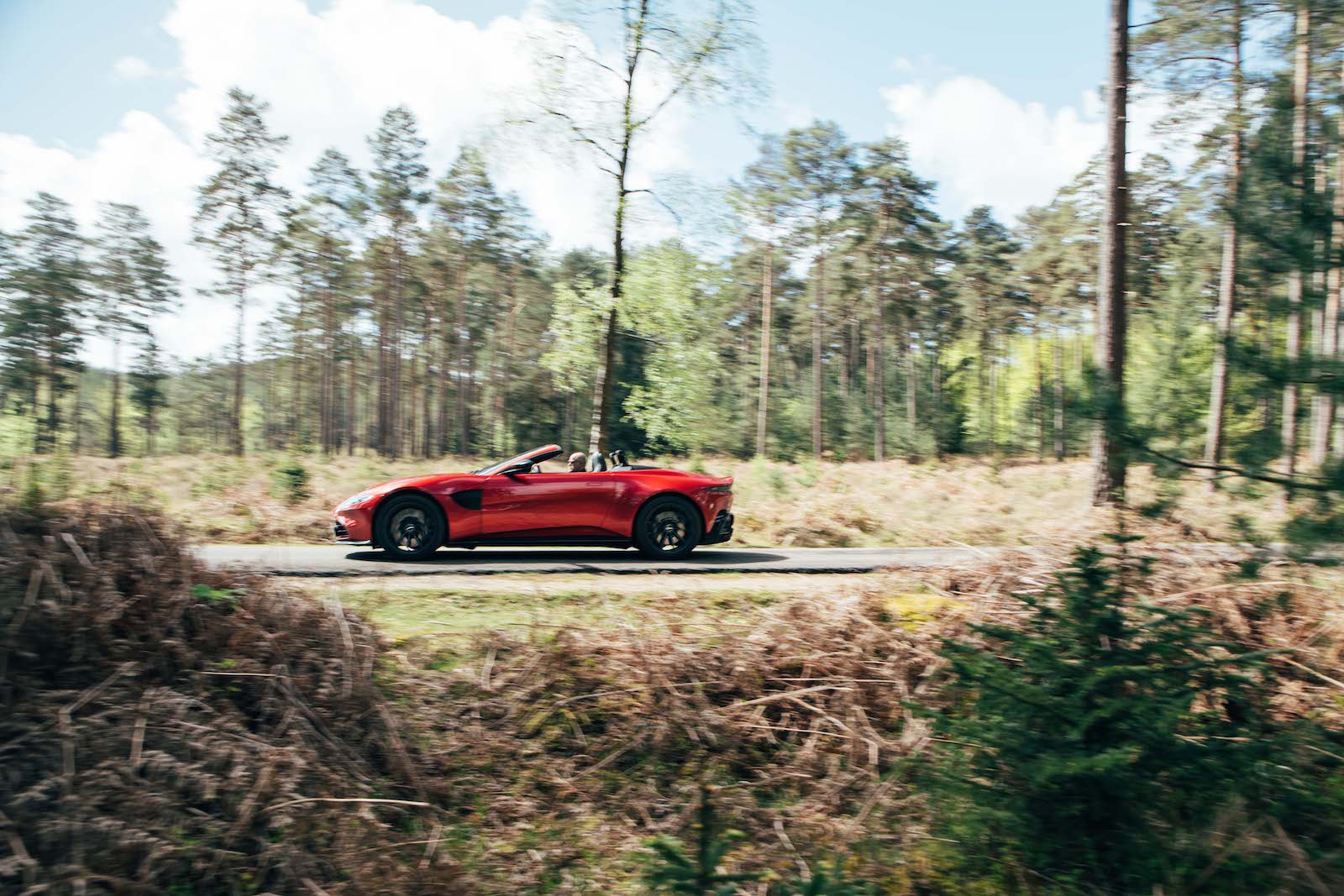 Regardless, it feels rapid and makes on-the-fly roof replacement entirely possible when crawling in traffic or when inadvertently caught in a torrential downpour while waiting at traffic lights. Other pertinent stats include the 0-62mph sprint time of 3.7 seconds and the ballistic top speed of 190mph.

How does it feel? It feels just as an Aston should, proving perfectly comfortable and composed over the more sedate journeys but totally outlandish when Sport+ or Track Mode is selected via a small but brilliantly tactile button on the steering wheel.

“Aston claims this swanky new roof opens in just 6.8 seconds and closes again in around the same time”

Punch the accelerator in Sport+ mode and there’s a surge of power and noise from the 4.0-litre V8 that seems to last forever, the gearbox slamming through the cogs as the speedometer rapidly tickles scary numbers. AMG knows how to make a brute of an engine but with Aston Martin’s input, it feels like even more of a loveable menace. 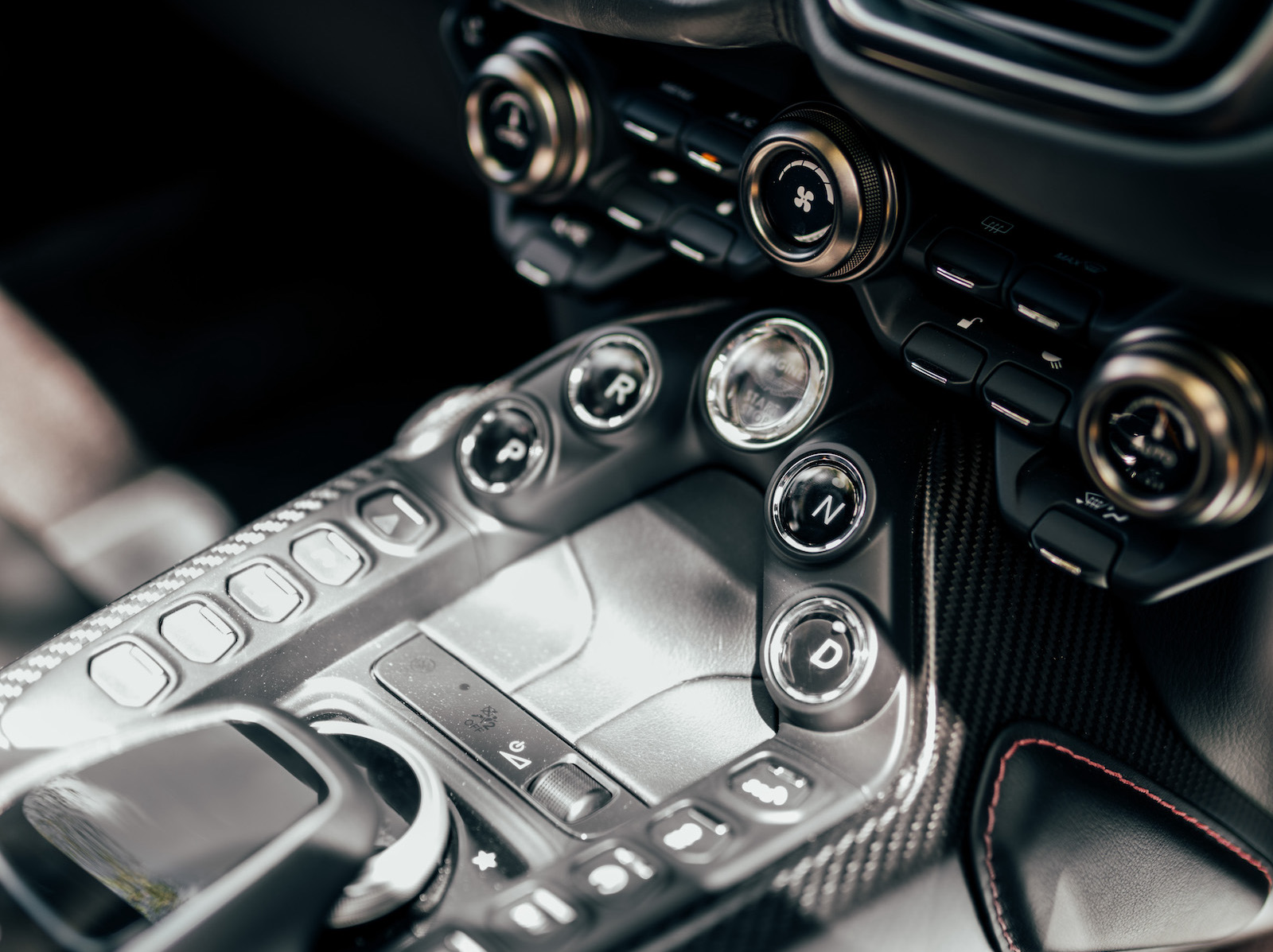 However, if you leave things in the standard Sport mode, it feels fairly quiet and subdued, with the ability to tootle around town without drawing too much attention to yourself. The same is true on the motorway, where it will settle into an accomplished big mileage machine. I even managed to return around 25mpg on one trek, which is mightily impressive for a car with such a ferocious side.

Unlike the Astons I drove (and swore at) over the years, this feels like a seriously poised and capable machine when pushed. It inspires plenty of confidence through the corners and positively shrinks around the driver, making even the tightest of B-roads feel less sweaty-palmed when taken at speed.

But let’s be real, you’re here for the noise and theatre and the Vantage Roadster delivers that by the bucketload. What starts out as a journey towards something utterly mundane or, in my case, an emotionally draining event, rapidly becomes all about the car. With the roof down and the Aston set to Track mode, it’s an animal and doesn’t fail to raise smiles. 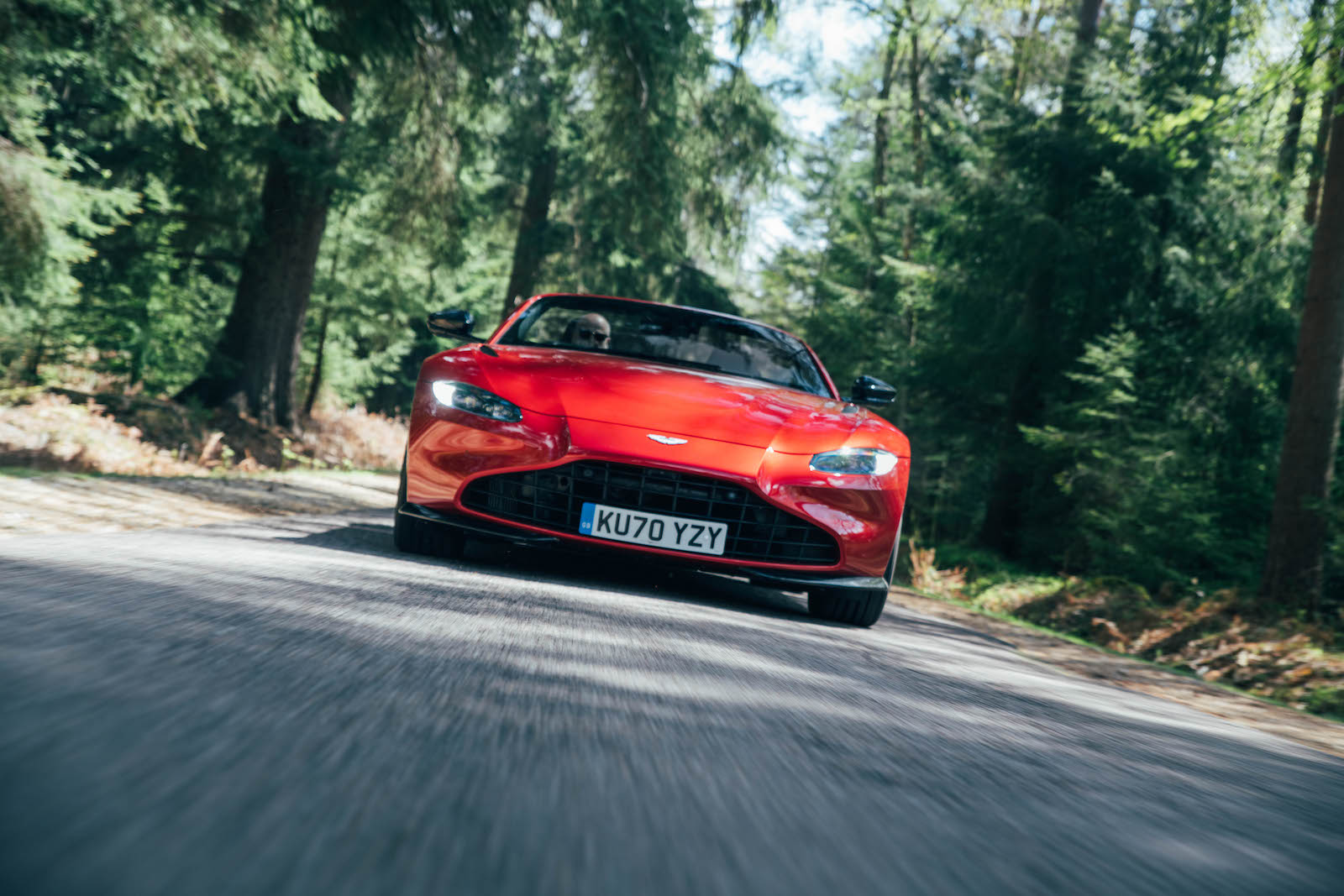 There’s also something brilliantly British about how the general public react to a convertible Vantage. It’s all respectful nods and waves at junctions, rather than overly aggressive tailgating or flashes of middle finger like you might in something more obnoxious.

It’s not perfect though, and there’s still a lot to criticise, especially inside the cabin. The infotainment screen feels very dated and isn’t touch sensitive. There was no Apple CarPlay or Android Auto to enjoy here and there are buttons absolutely everywhere. Cycling through media, radio and navigation requires some muscle memory when travelling, to the point I didn’t bother half the time.

It’s the sort of car you can get away with riding for hours on end with only the soundtrack of the engine to keep you company. But it is a shame the nav is so dated and a bit rubbish, while the ability to tether a smartphone would render all of these complaints null and void. 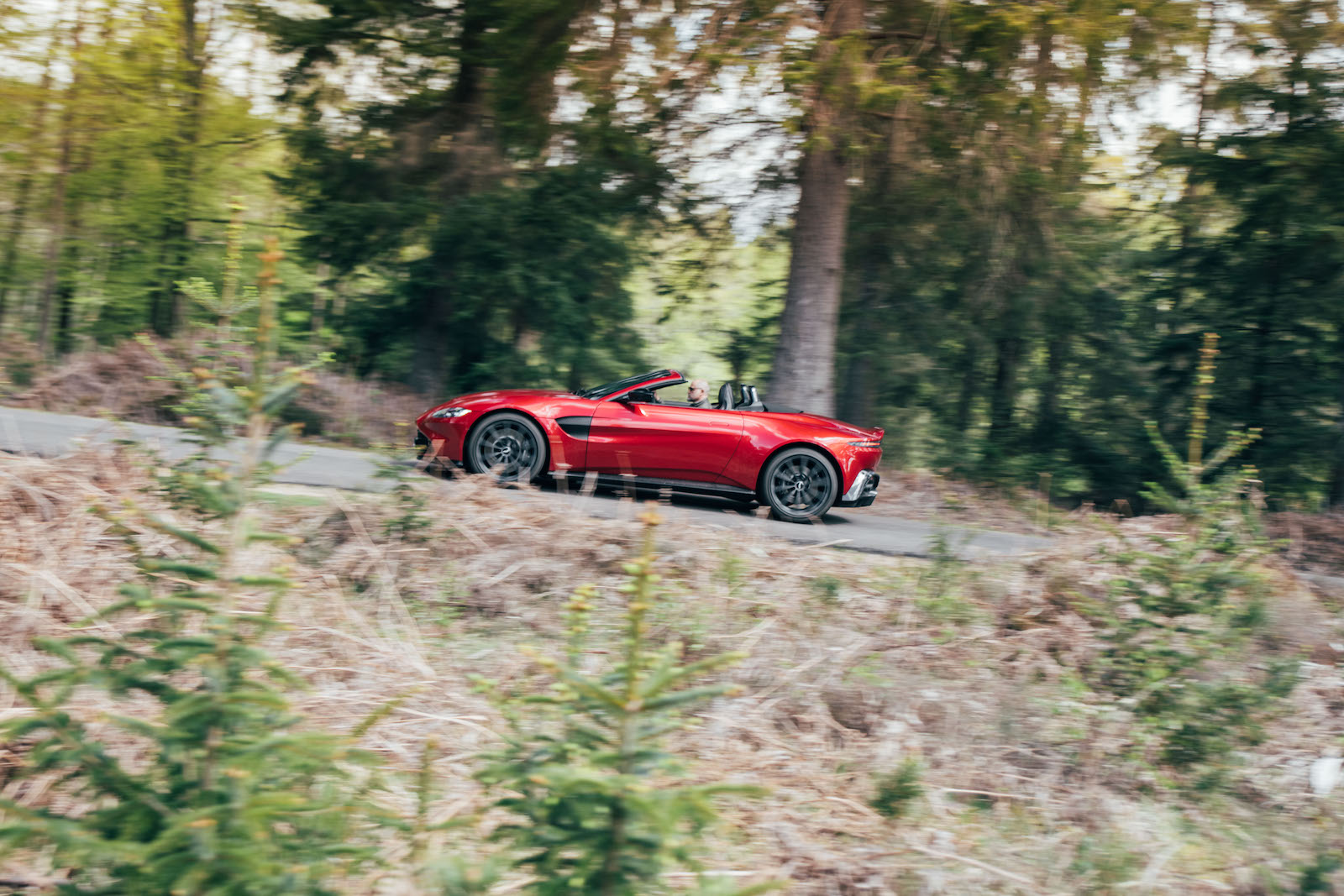 The boot is a decent size and there’s enough room up front for two average sized adults to sit comfortably. Cupholders and cubby holders are fairly small, but there is a stowage area behind the occupants. The fuel tank is also impressively large, meaning you won’t have to worry about constantly filling up when pummelling through Europe on your holidays.

But forget the boring stuff because this car is special. It sounds phenomenal, it looks fantastic and it makes you feel deeply happy when driving it. Even when life is giving you lemons, it smashes them to pieces and creates the sweetest beverage. That’s all that matters. 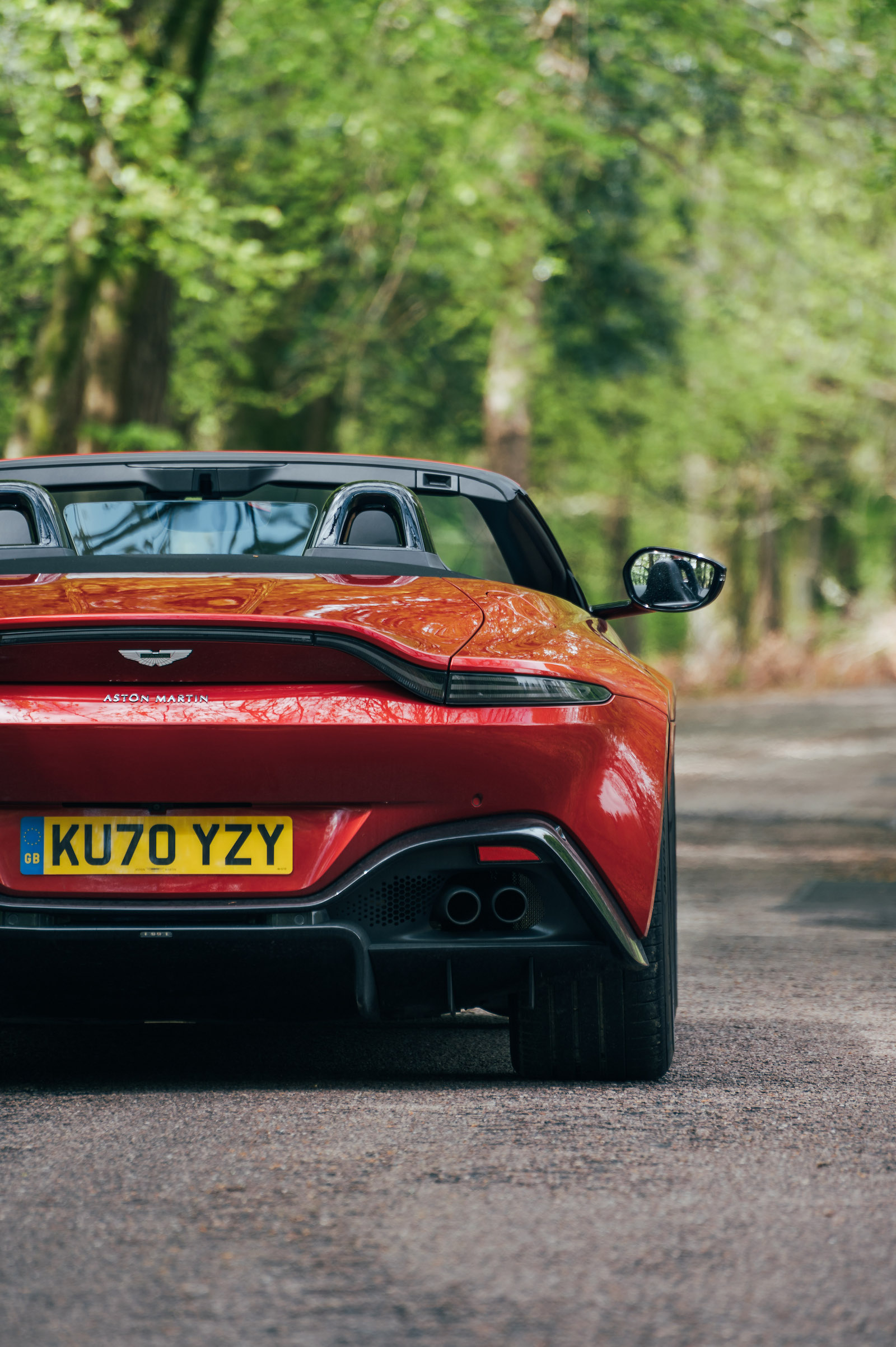