The hot hatch market has got a bit silly of late, with manufacturers involved in some bizarre horsepower arms race to prove who can squeeze more grunt underneath the bonnets of these diminutive race cars.

Mercedes’ very own testosterone-fuelled A45 AMG manages to pump out a heady 381bhp, while the Ford Focus RS delivers an eye-watering 345bhp. Both utterly terrifying figures when you consider even the most potent hot hatches of yesteryear could barely deliver 100bhp.

But Audi, seemingly sick of doing things half-arsed, has managed to extract 400PS (or 395bhp for Brexiteers) from its 2.5-litre, five-cylinder petrol engine that powers the baby of the RS bunch. 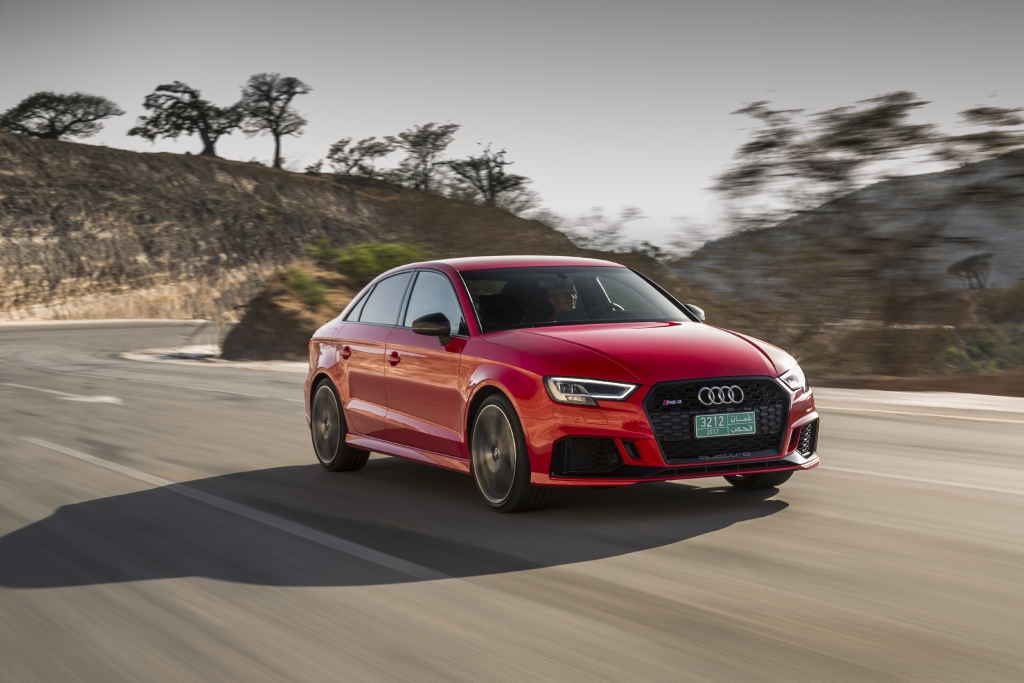 On top of this, the German marque has seen fit to release a saloon version, despite the body style proving about as popular as a bout of gastroenteritis on these shores.

“There is plenty of power, the styling is purposeful without being too shouty, the interior is luxurious and all of the mod cons are present and correct”

Still, Audi shifts a lot of cars in the USA, where the ‘sedan’ still rules the roost, while buyers in China like their molten-hot machines to sport a boot, no matter how small the rest of the car is.

Surprisingly, slapping a compartment for golf clubs on the RS3 Sportback hasn’t had an adverse effect on the visuals – quite the opposite, in fact. 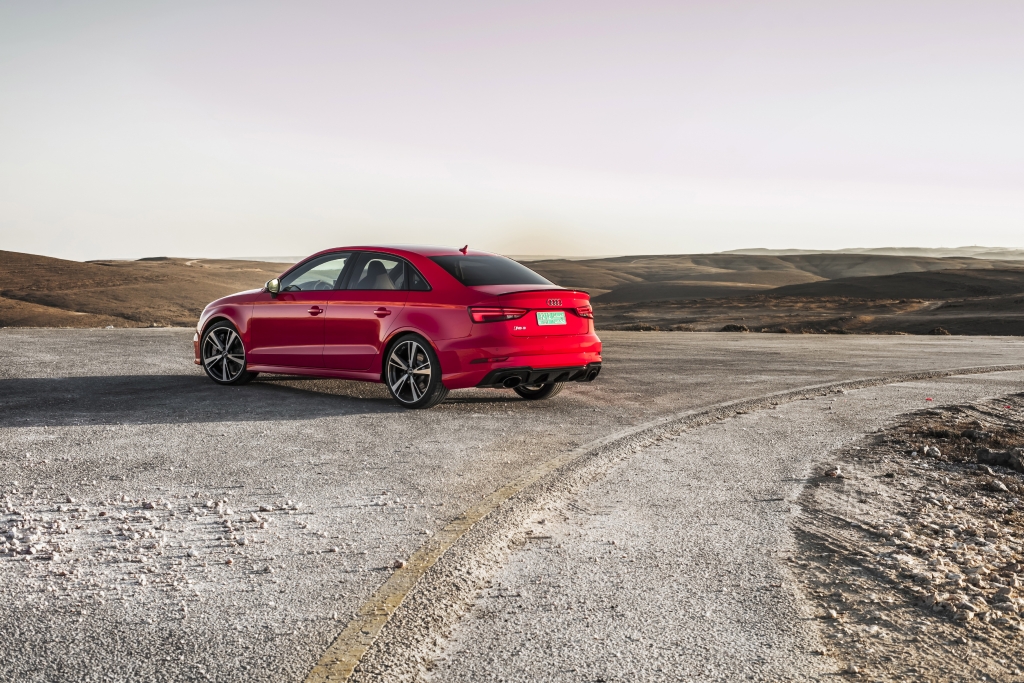 The Saloon sits 25mm lower and 20mm wider than the standard A3, while the massive 19-inch alloy wheels fill flared wheel arches nicely.

At the front, there’s a gaping honeycomb grille and the sharp Matrix LED headlights we’ve come to expect from Audi, should you option them.

It’s sharp, muscular and clearly pumped up way beyond the base car and, sat on the driveway at least, it has more than just a pinch of Hot Wheels about it, but it never feels over the top. 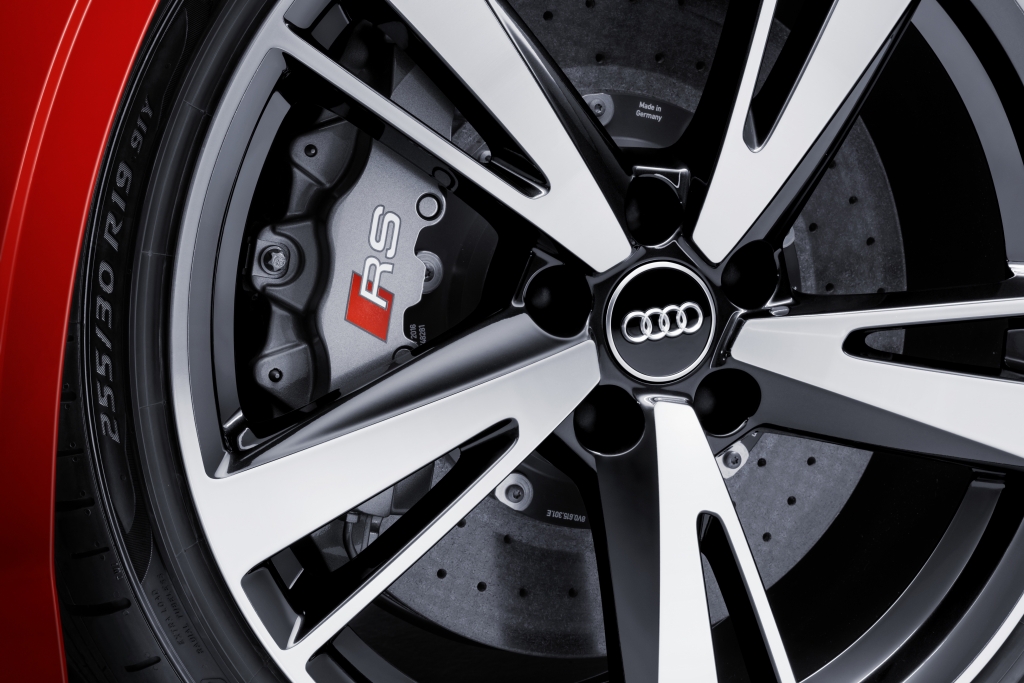 Inside, there is a pair of Nappa leather sports seats on the front, complete with RS iconography, a flat-bottomed steering wheel and lots of sporty Alcantara and aluminium finishing, ensuring the RS3 Saloon remains premium as well as performance-orientated.

It’s certainly a handsome thing, but we can’t help thinking it could wear its performance credentials on its sleeve a little more. There is 400PS underneath that bonnet after all, yet Audi has seen fit to keep things pretty restrained.

Audi recently introduced the second generation of its infotainment system and the RS3 Saloon is the lucky devil to receive said refresh. 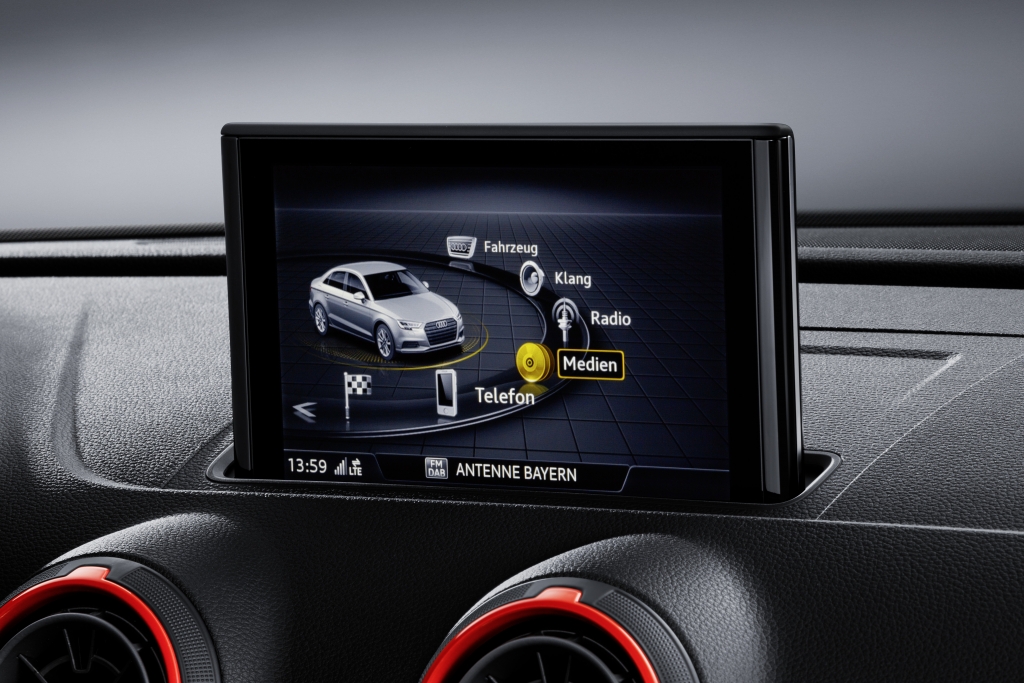 It means the rising central screen benefits from a faster Tegra 30 processor, which makes navigating the menus much speedier, while the Audi R8’s Virtual Cockpit system is introduced for the first time.

There’s something slightly cheap feeling about the small screen that appears from the dash and the menus feel quite small and fiddly to operate via the jog-wheel system, but it gets more familiar with time.

The 12.3-inch Virtual Cockpit looks excellent on this car and is the cherry on top of a swanky package, while the jet fighter-inspired HVAC system, although not brand new, still looks very cool. 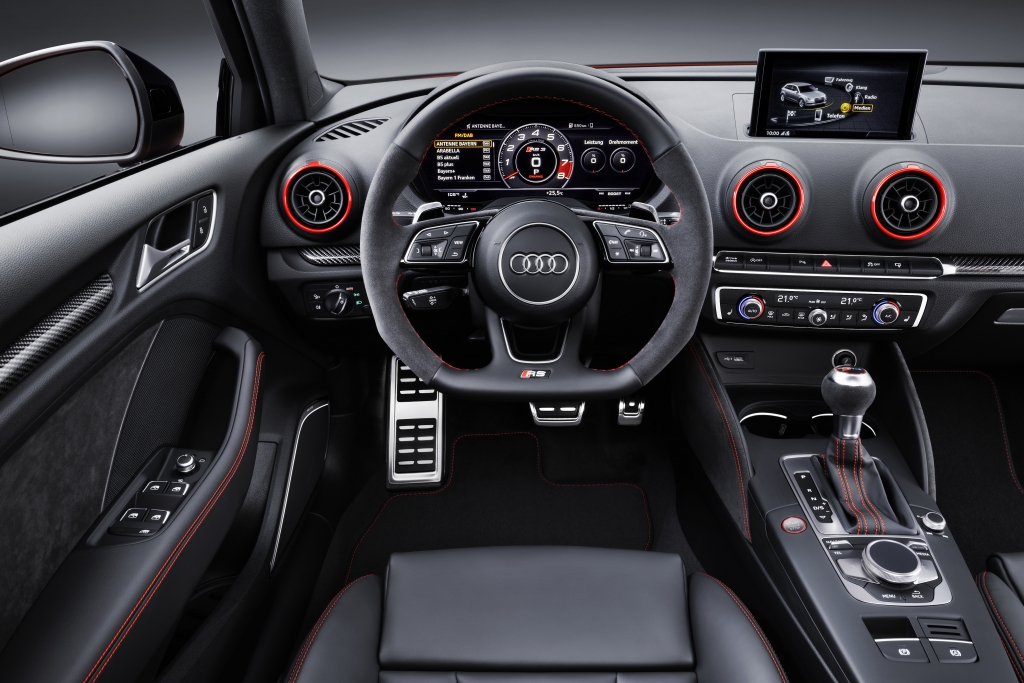 Naturally, owners can tether smartphones to make hands-free calls, read messages and access Spotify playlists, but we’re sure you’d expect (or should that be demand?) all of this from a £45,675 car.

That said, Audi will still tempt you with plenty of optional extras and the test car we jumped into for a week came in at a wallet-busting £55,335.

There was a time when shoehorning 395bhp into a small family run-around would have been dismissed as madness but Audi’s engineers have somehow managed to make it all very approachable. 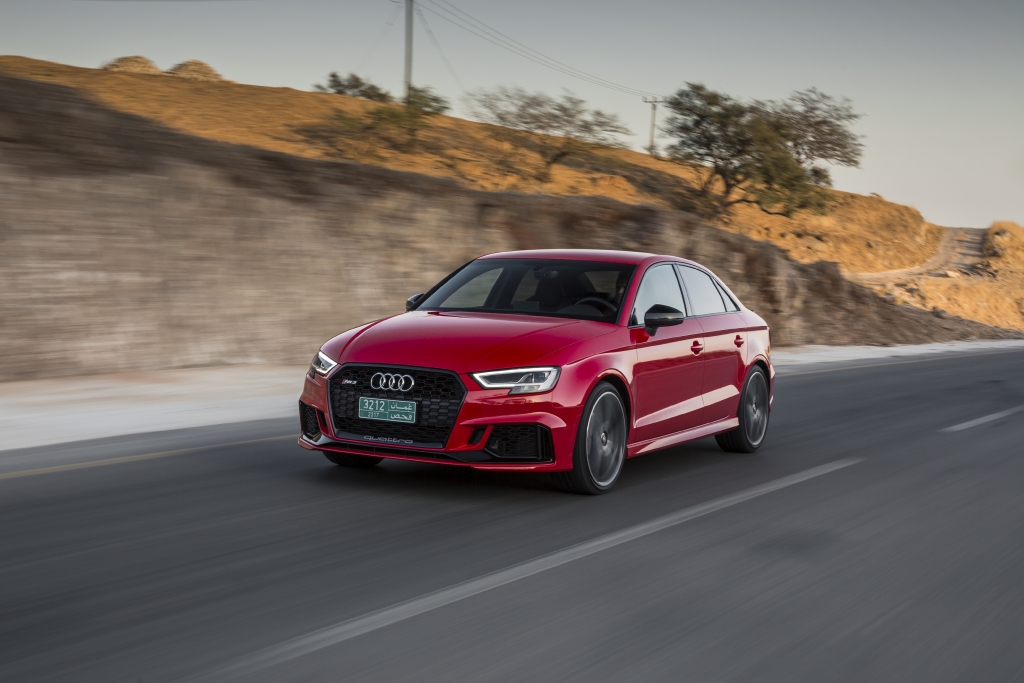 The TFSI unit delivers its power to all four wheels via a seven-speed S tronic twin-clutch gearbox, with the system able to send between 50 and 100 per cent of its power to the rear axle, depending on the situation.

It’s a huge leap forward from previous RS3 iterations, which had a tendency to understeer and therefore leave the driver feeling a bit numb, as the latest model favours the rear wheels when dialled into Dynamic mode and actually slithers around a bit when pushed.

That said, the real party trick is its straight-line performance, with the new RS3 Saloon able to hit 62mph from a standstill in just 4.1 seconds. 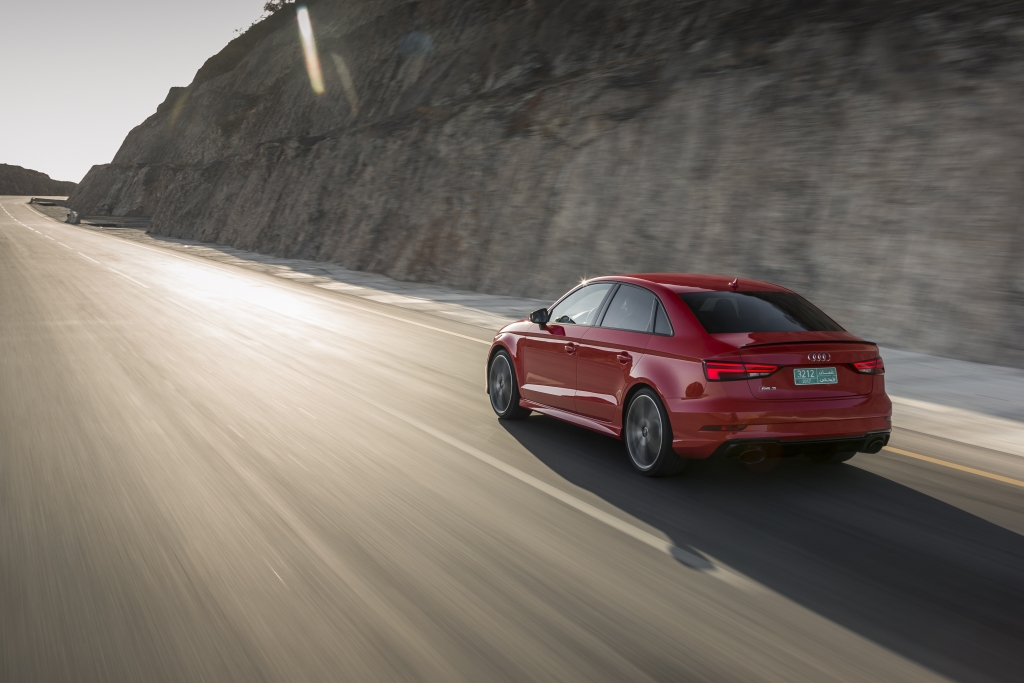 It’s a noisy little bugger too, and the optional RS Sport exhaust system (a must for hooligans) unleashes all manner of pops and bangs from the twin oval pipes when driven in anger.

However, the ridiculous ‘bark, pop, bang’ routine every time the ignition button is thumbed does get a bit annoying and we can imagine neighbours will be posting turds though the letterbox if you have an early morning commute.

Regardless, there’s no denying the RS3 Saloon is great fun to drive. Perhaps not totally engaging like the aforementioned Ford Focus RS, nor as banzai as the Mercedes-AMG A45, but it is devastatingly fast and addictively noisy. 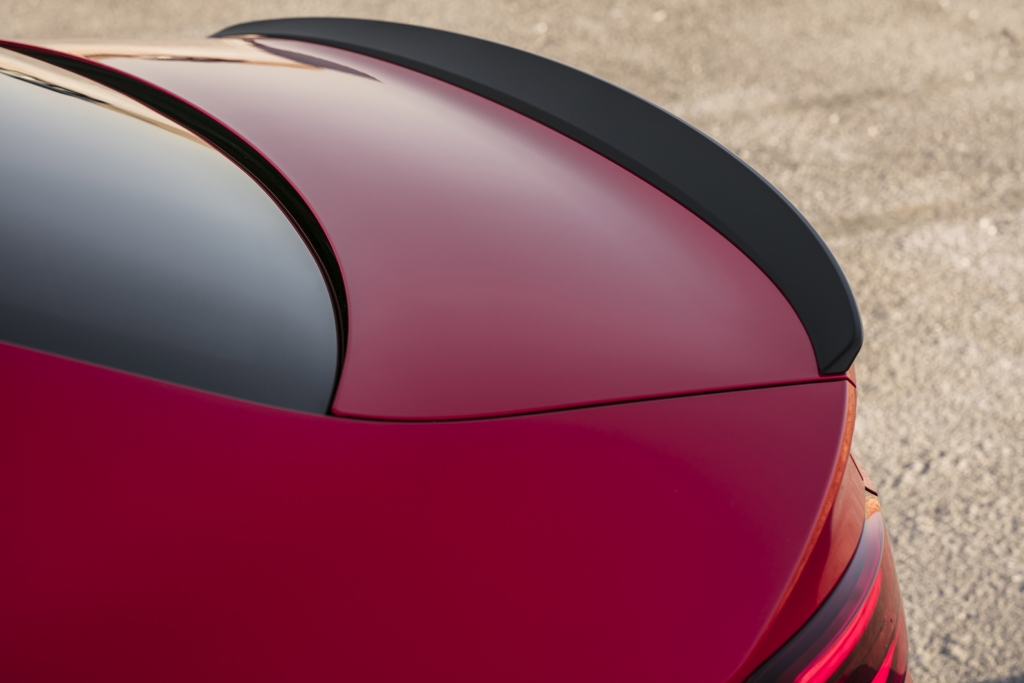 This particular model rode on passive dampers, rather than the optional magnetic ride, and it did feel jarring at times. Both driver and passenger experienced bumps on the motorway, and truly bad back roads weren’t particularly pleasant.

Steering is also a minor downside, as despite a clever electrically assisted system adjusting its level of assistance according to speed, it doesn’t offer much feedback when really pushing on.

The seven speed twin-clutch gearbox, on the other hand, is responsive and pulling on the gear paddles is made even more enjoyable by the raucous soundtrack.

There is very little else out there that can sate an appetite for a blisteringly fast compact saloon. BMW’s M2 would be an obvious place to start, but it lacks rear doors and is an altogether more hardcore proposition. 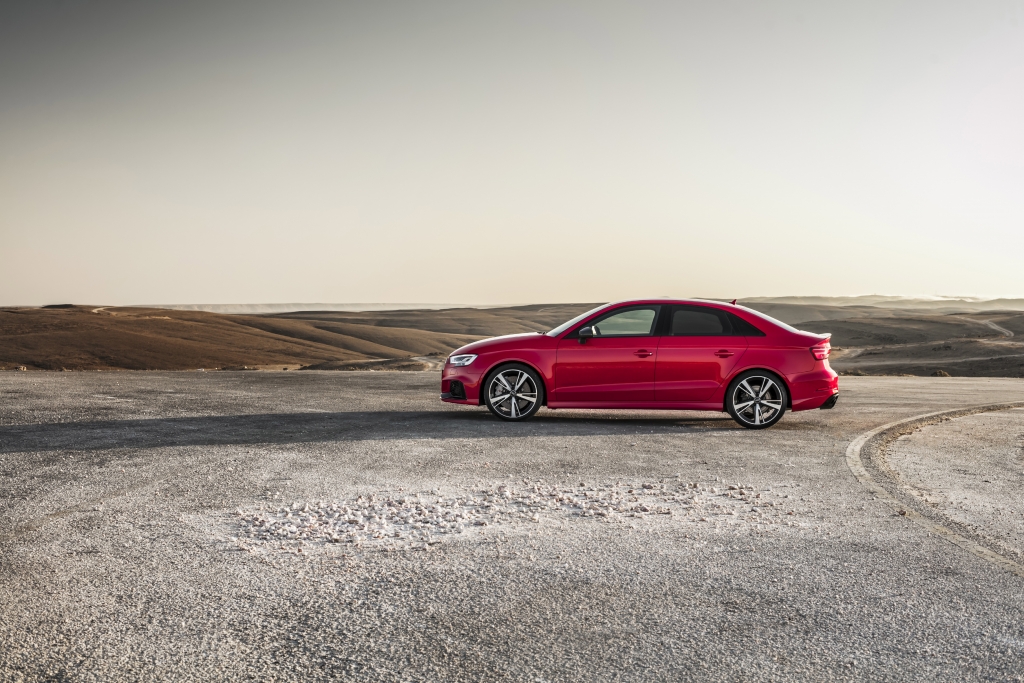 Mercedes-Benz could also sell you an AMG-fettled CLA45, but it is down on power, heavier and not as nimble as this particular pocket rocket.

The Audi RS3 Saloon seems to tick many boxes but at the same time, it misses that little something that makes you fall in love with a performance machine.

There is plenty of power, the styling is purposeful without being too shouty, the interior is luxurious and all of the mod cons are present and correct, but it doesn’t make the heart skip a beat when you decide to take the long route home along favoured roads. 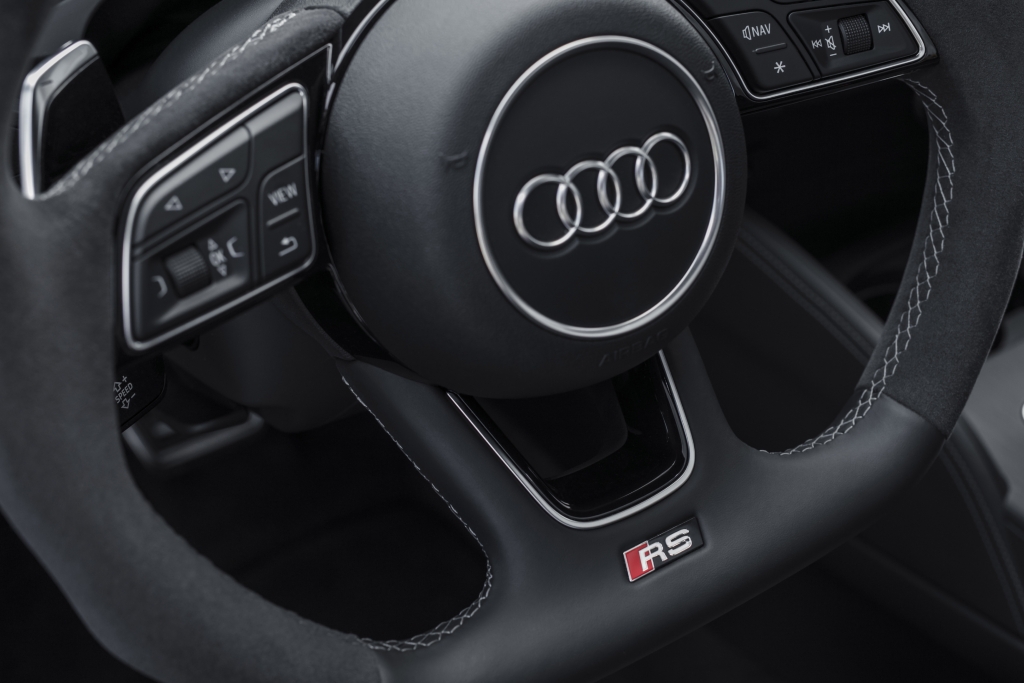 As stupidly fast compact four-door sedans go, the Audi RS3 Saloon is arguably the best, but we can’t help thinking there are more engaging hot hatches out there that don’t cost as much. 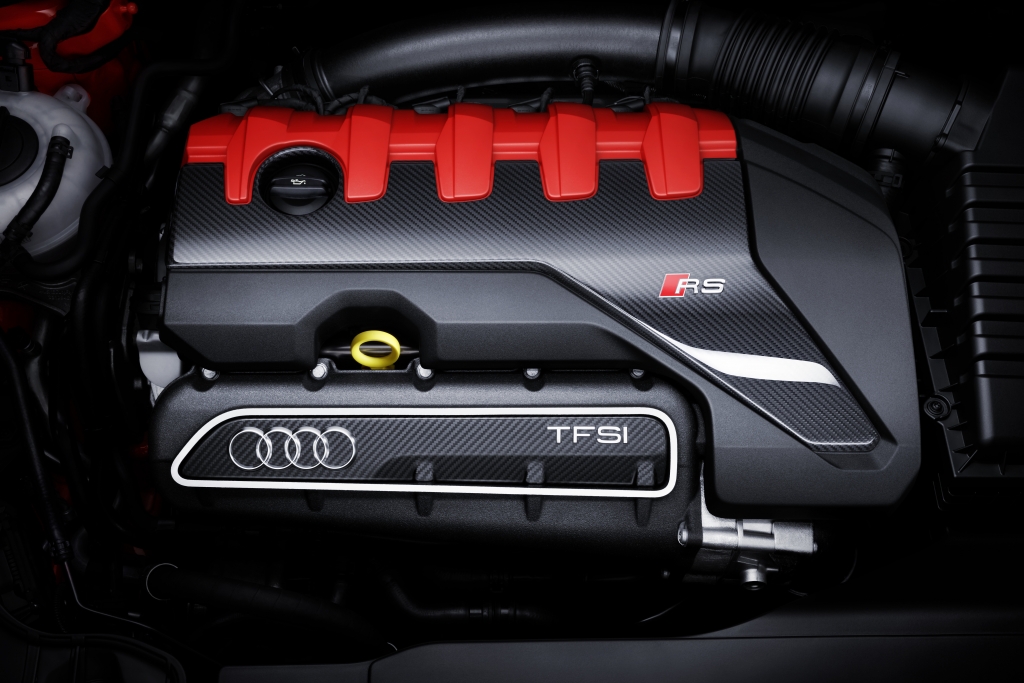