In this age of ever flabbier cars, gimmicked to the hilt with artificially snarling ‘Sports Exhausts’ and ludicrous power levels, there’s still a craving for something purer, catered for at either end of the spectrum by machines like the Toyota GT86 and Porsche 911R.

However, despite their various merits, both these cars merely play on perception of purity. If you really want a fully distilled hit of unfiltered driving you really need to get your hands on a Caterham Seven.

“However hardcore you think you might be, it will never become your daily driver”

Sitting in the middle of the expanded Caterham line-up, the 360 has enough pace to keep things exciting without being as pant-wettingly insane as the 314hp 620R (capable of Porsche 918 Spyder-beating 0-62mph sprints of 2.79 seconds). 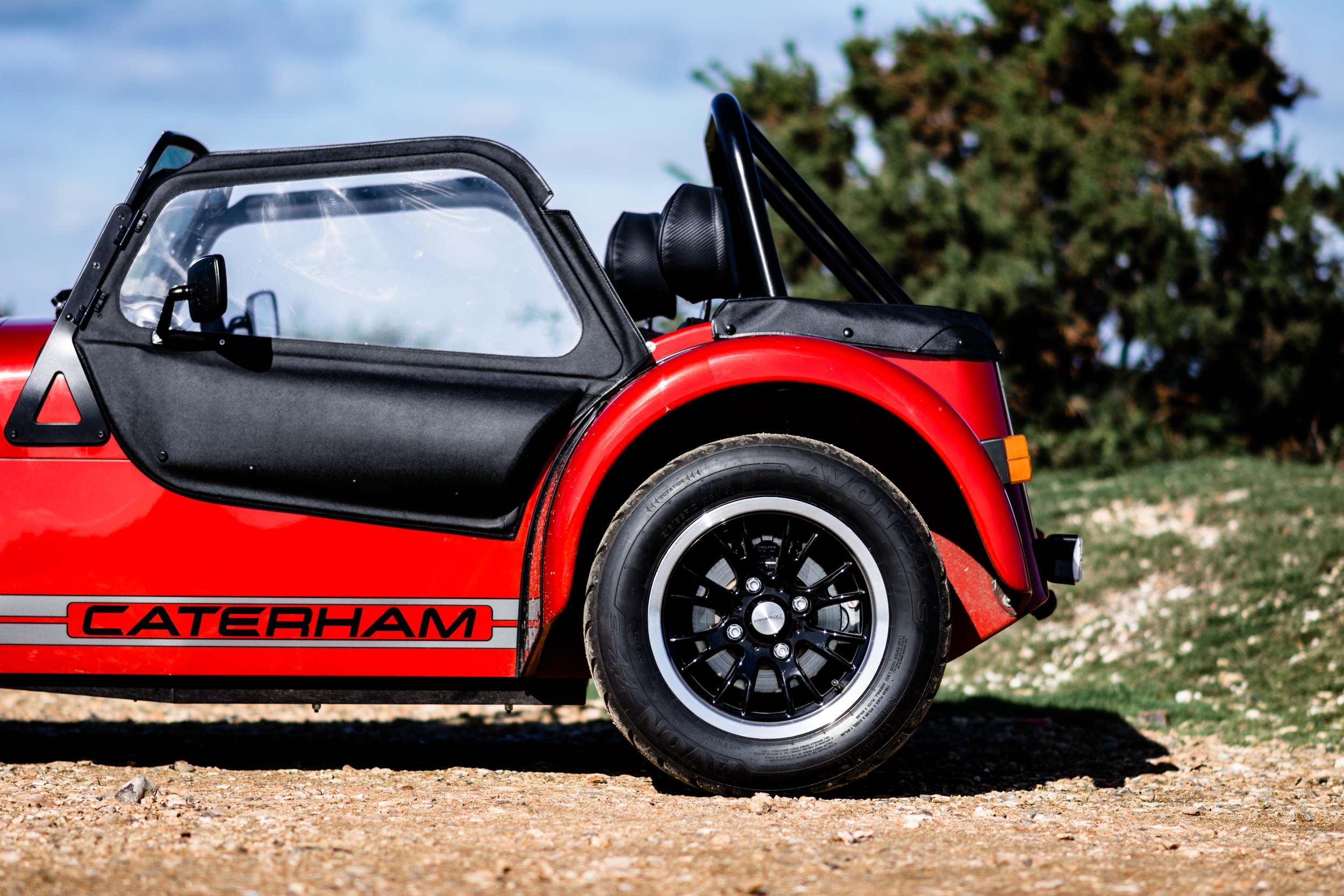 Of course, while the aforementioned Toyota or Porsche could be used every day, buying a Caterham Seven is a slightly different proposition. However hardcore you think you might be, it will never become your daily driver.

It’s not your conventional sort of car but, £30,000 doesn’t bring much more fun than this (at least without straying into the realms of the weird, wonderful and often illegal). 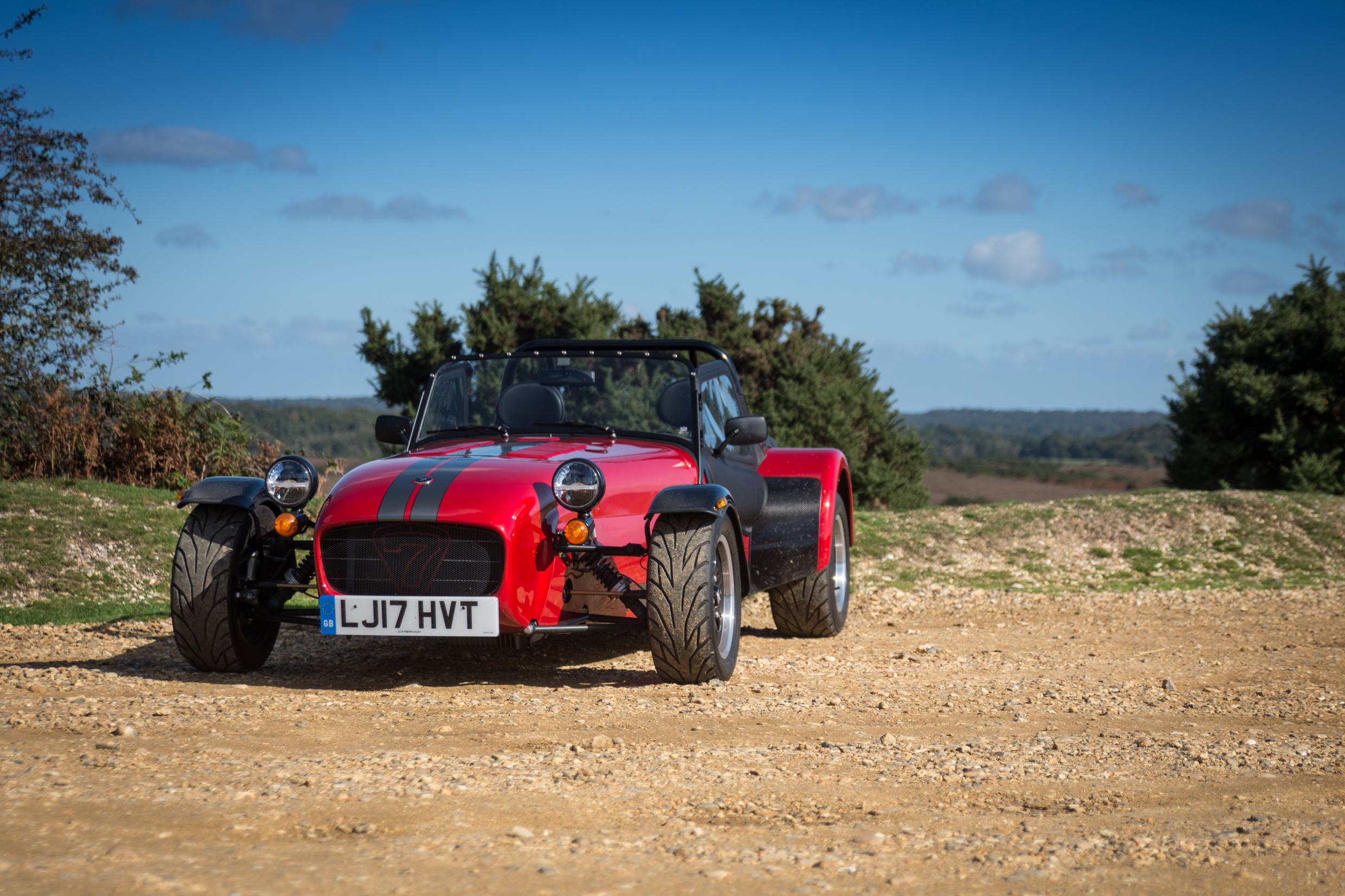 Visually not much has really changed to the Caterham design since its original days as the Lotus Seven. Sure, the front wings have been paired back to simple racing-style mudguards but that’s about it.

‘Our’ particular Caterham Seven 360R came with the wider SV chassis (helping to comfortably accommodate our six-foot, one-inch frame) which, with its wider front and rear track helps the car to sit a little more aggressively than the more svelte, standard S3 chassis.

“If you rock up in a Caterham, everyone immediately knows exactly what you’re about”

While the idea of the standard aeroscreen may be appealing (and cheap), stumping up £1,250 for the full windscreen is definitely worth it. It doesn’t really ruin the sleek look of a modern Seven but, more importantly, it prevents your teeth from looking like a garibaldi biscuit after even the shortest of back road blasts.

The optional 13-inch ‘Apollo’ alloys are the best-looking wheels in the range too and, thanks to their diddy diameter, help to add a little extra compliance to the overall ride quality. 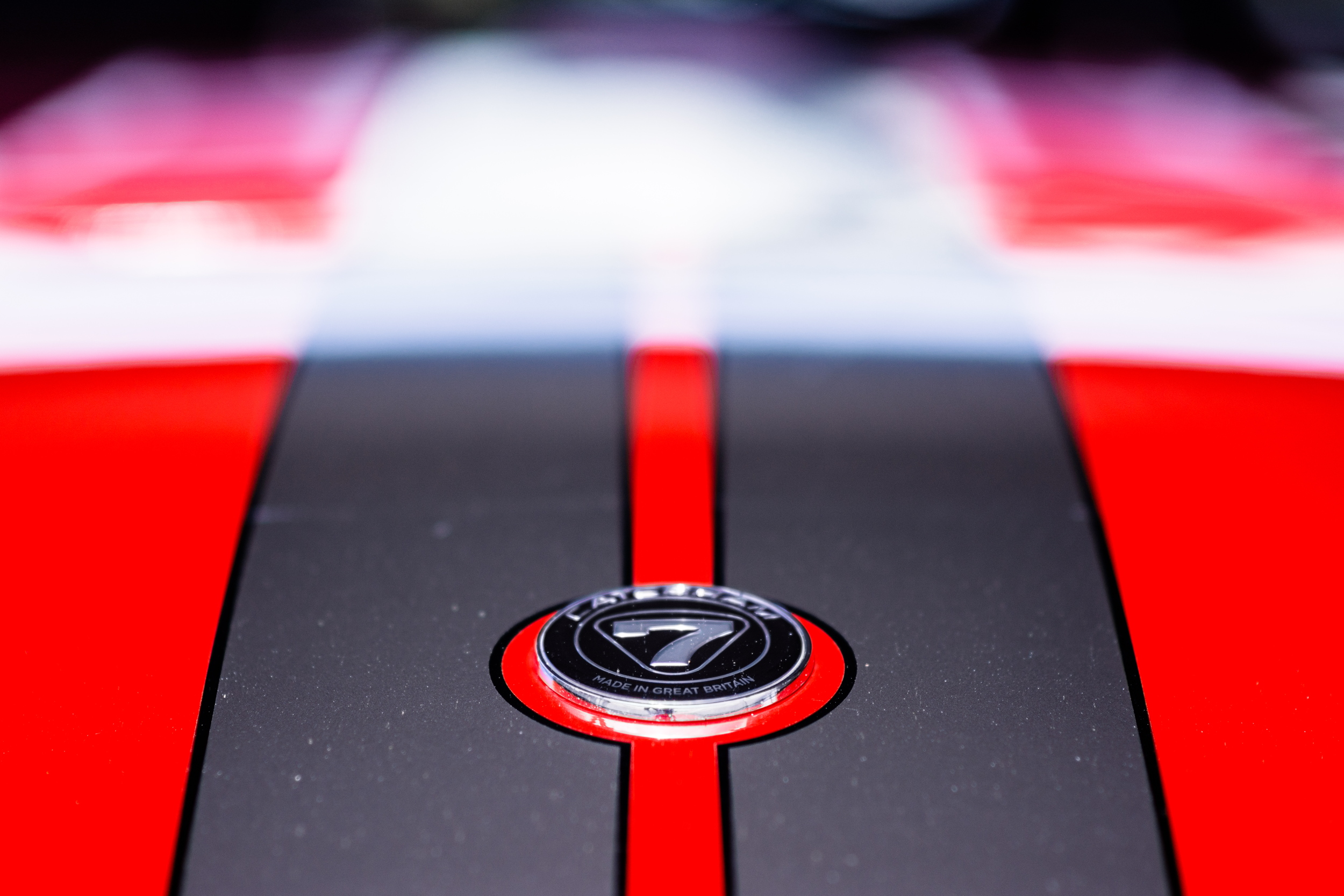 Other than that, there’s not much else that you can do to dramatically change the appearance of your Caterham Seven (bar a myriad of paint and sticker options, and the ability to add some unpainted carbon fibre finery to the wheel arches and nose cone).

Sure it’s not as sleek as some of the latest crop of supercars but, we love its purposeful looks. If you rock up in a Caterham, everyone (including the non-petrolheads) immediately knows exactly what you’re about. 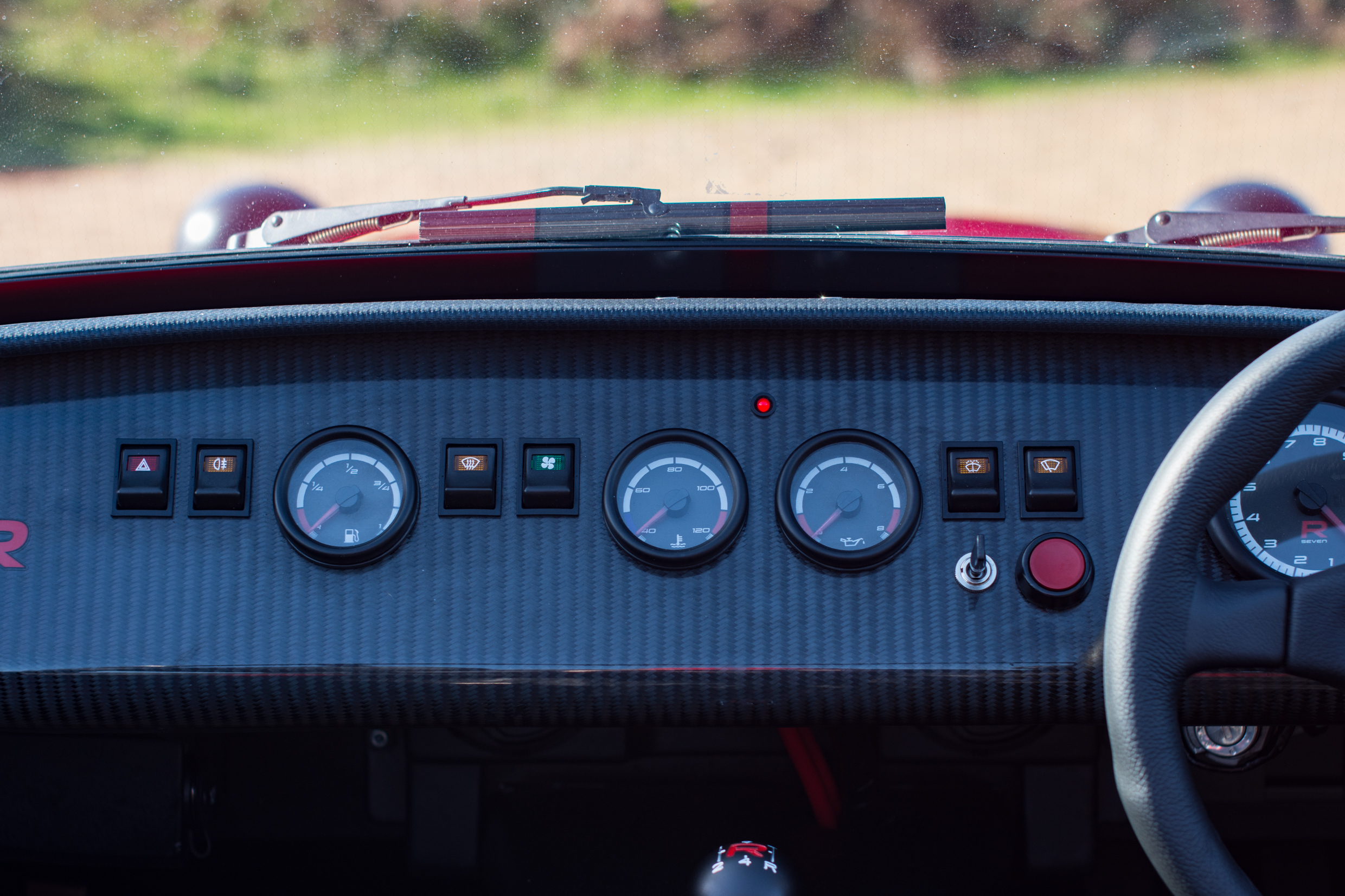 Err, there are two seats, three pedals and little Momo steering wheel and a stubby five-speed gear lever (a six-speeder is available as an option).

“If you’re looking for sat-nav, climate control and a host of other goodies, you’ve come to the wrong place”

Honestly, the cockpit really is a lesson in minimalism. The optional carbon dash is a nice touch (isn’t that costly) and, if you opt for the race-focussed ‘R’ Pack you don’t even get carpets.

While we’re not entirely sold on the carbon leather trimming, the seats themselves are almost perfectly formed (a little extra support around our hips wouldn’t go amiss, especially when pressing on) and the four-point race harness is a welcome addition. 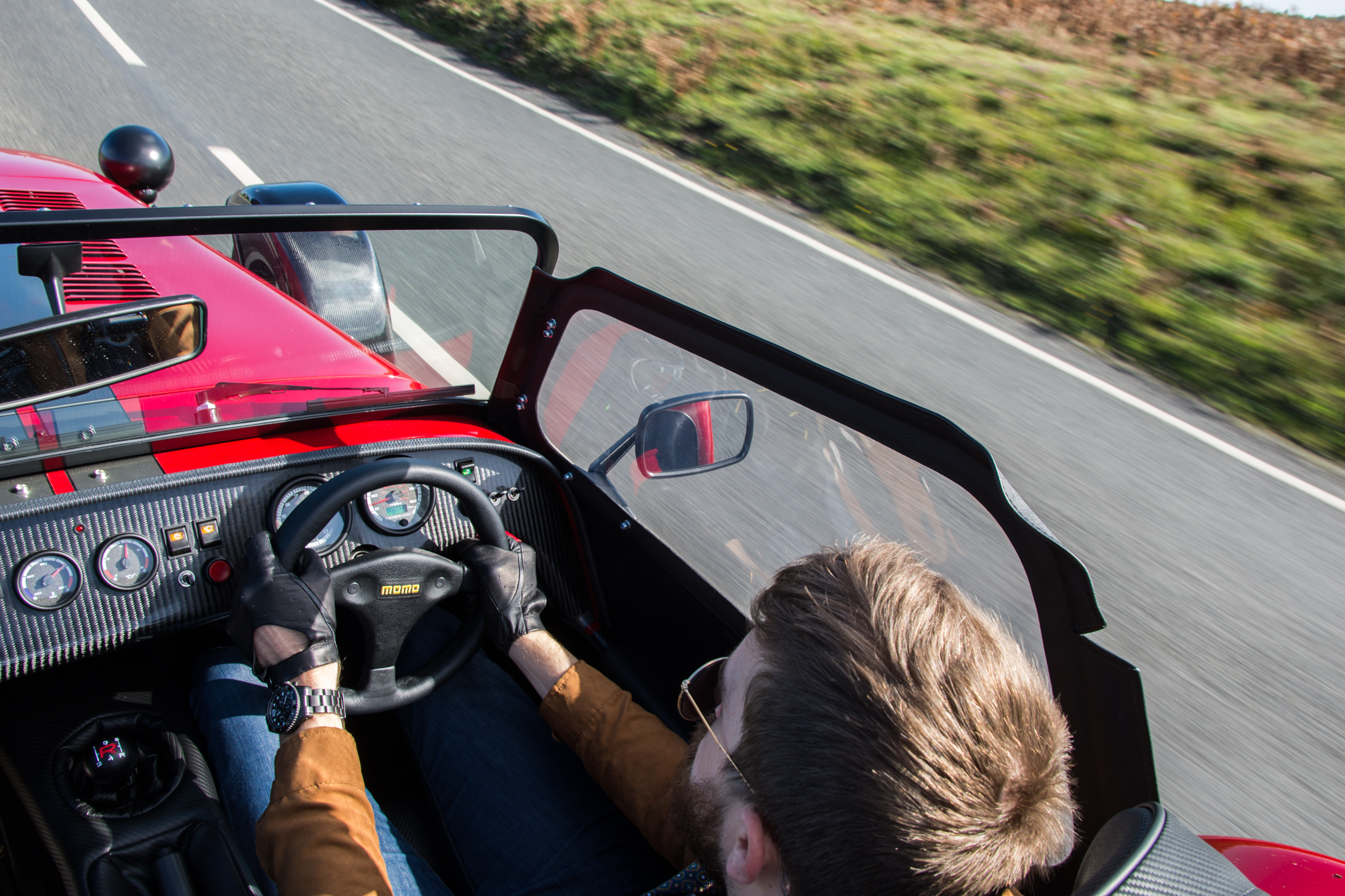 Other than that, if you’re looking for sat-nav, climate control and a host of other goodies, you’ve come to the wrong place. This is a Caterham Seven review. Maybe the new Aston Martin DB11 V8 would be more your sort of thing… 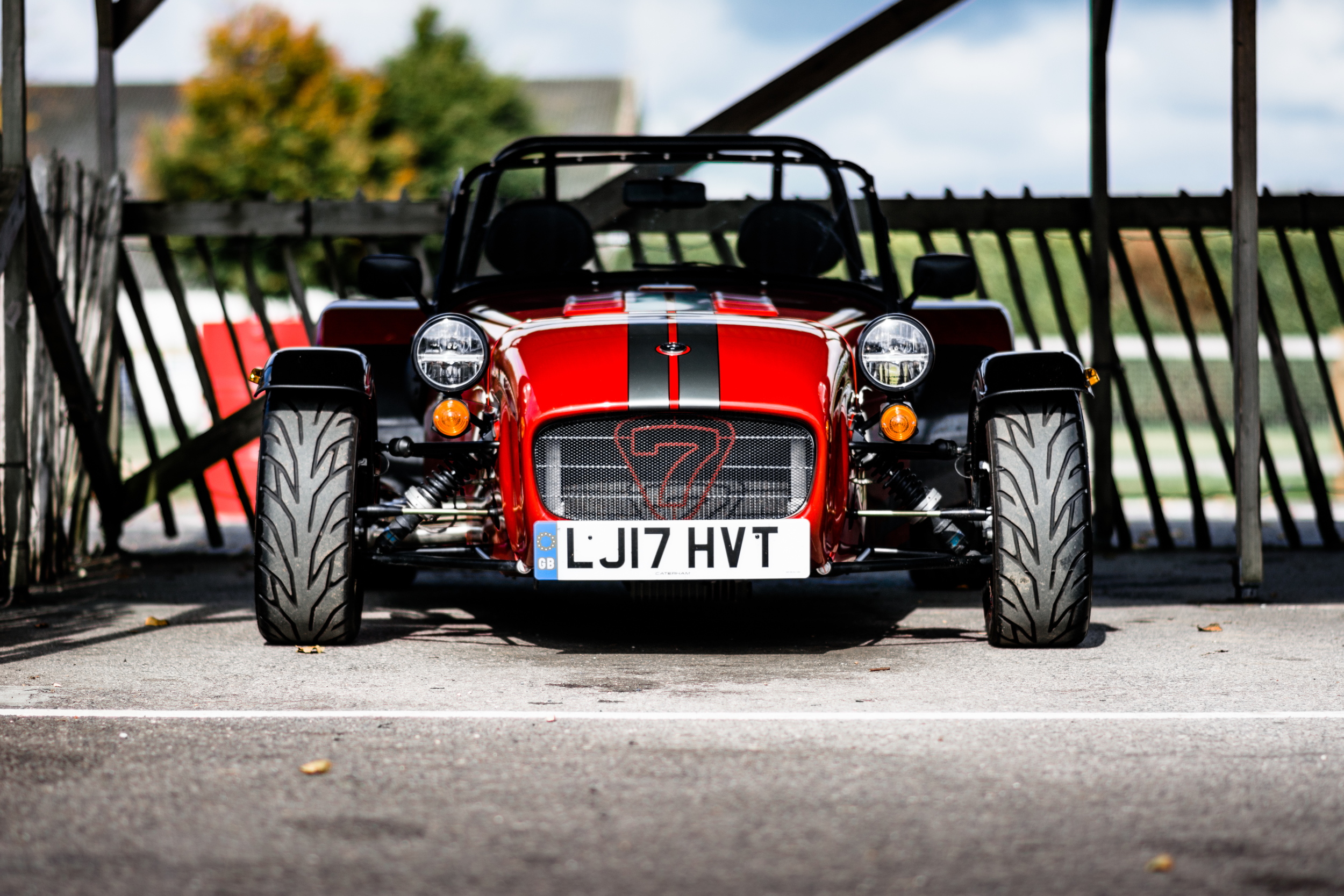 In all seriousness, the whole point of a Caterham is its lack of distractions. It’s all about you, the car and the epic road you’ve chosen to pit yourself against.

There’s a fair scope to personalise the mechanicals though, especially with the ‘R’ Pack. Aimed at owners who are likely to use their Seven as a regular track toy, you get a limited-slip differential, lightweight flywheel, sports suspension and a shift light (among other tweaks) as standard.

At £4,495 it’s pretty pricey (though cheaper than the sum of its various components if you were to spec them individually). Is it worth it?

Well, it depends what you plan to do. If you’re new to the whole Caterham Seven experience and just looking for something to enjoy on sunny Sunday mornings in the summer, it probably makes the standard Caterham Seven 360 a little too hardcore. 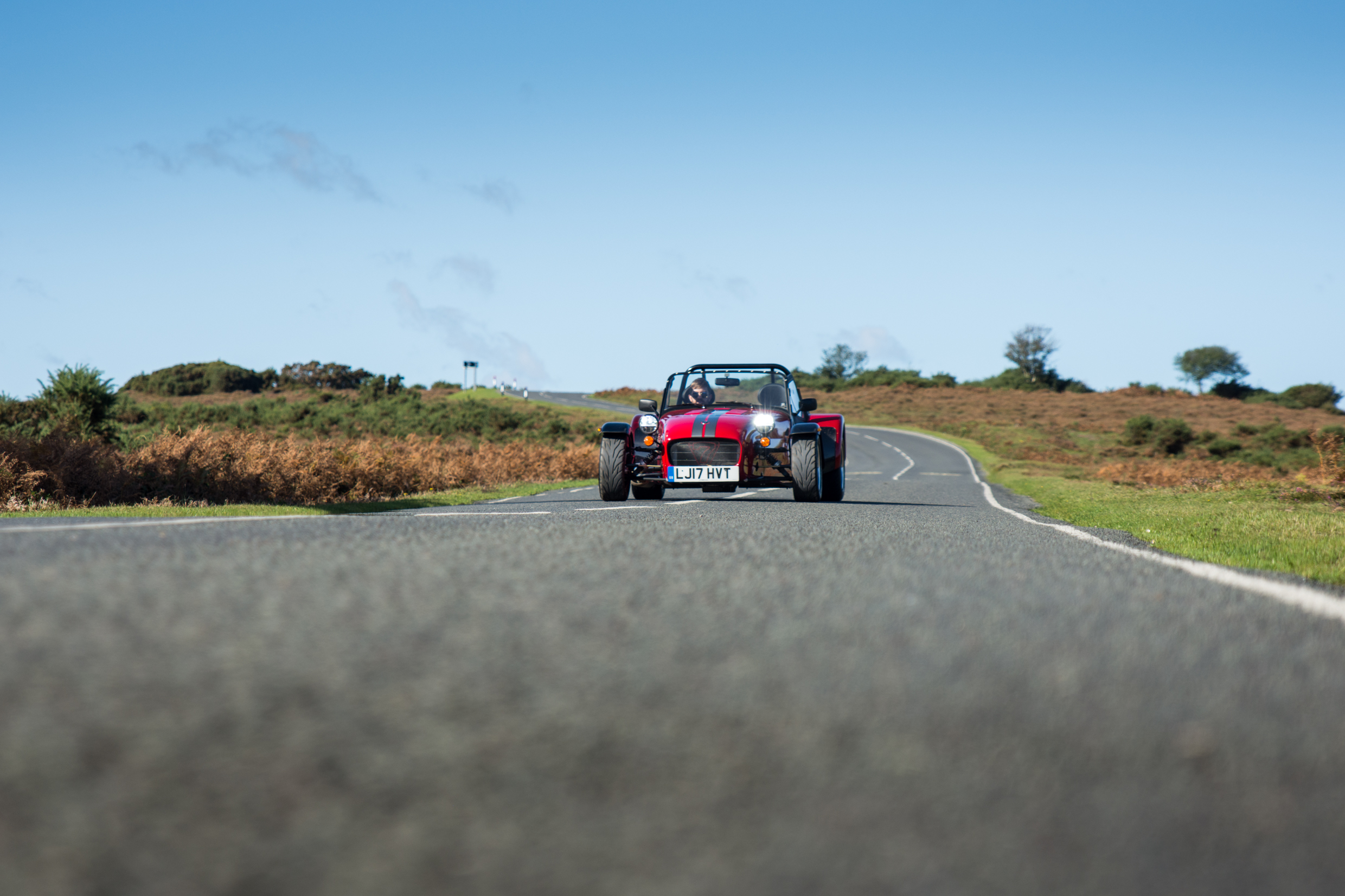 Alternatively, if you’re addicted to track days or simply want something a little more serious to thread through your favourite country lanes it’s perfect, helping to sharpen the standard car without going completely mental (a la the 620R).

Has that helped you make your mind up? No. Oh… 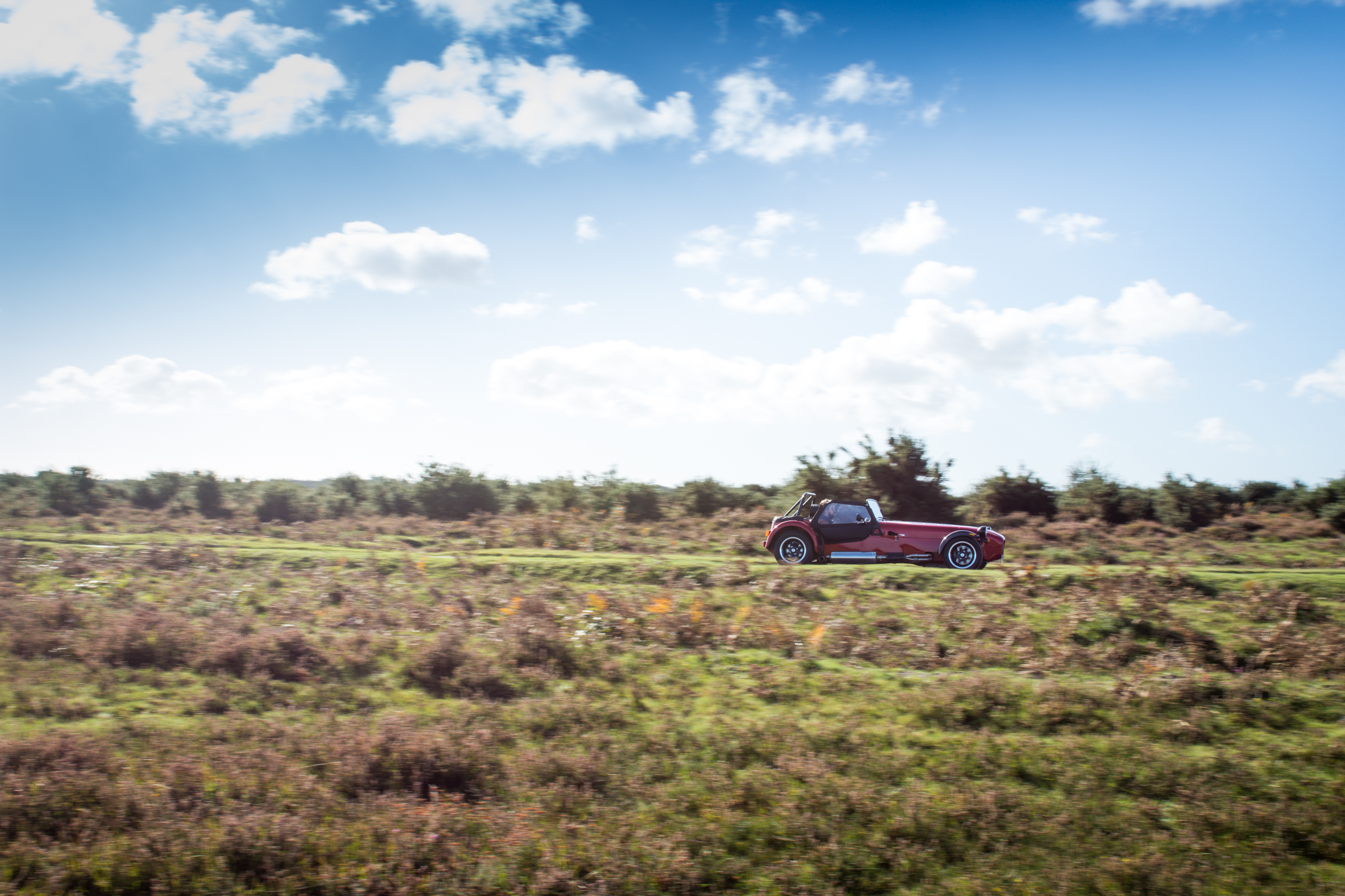 Battle your way past the often-belligerent immobiliser and you’ll find the Caterham Seven 360R fires up with more vim and vigour than its relatively paltry 182hp suggests.

Coupled with the lightweight flywheel of the ‘R’ pack, the response under your right foot is almost motorbike-sharp, with pleasingly rowdy tune played out next to your right hip (courtesy of the side-exiting exhaust). 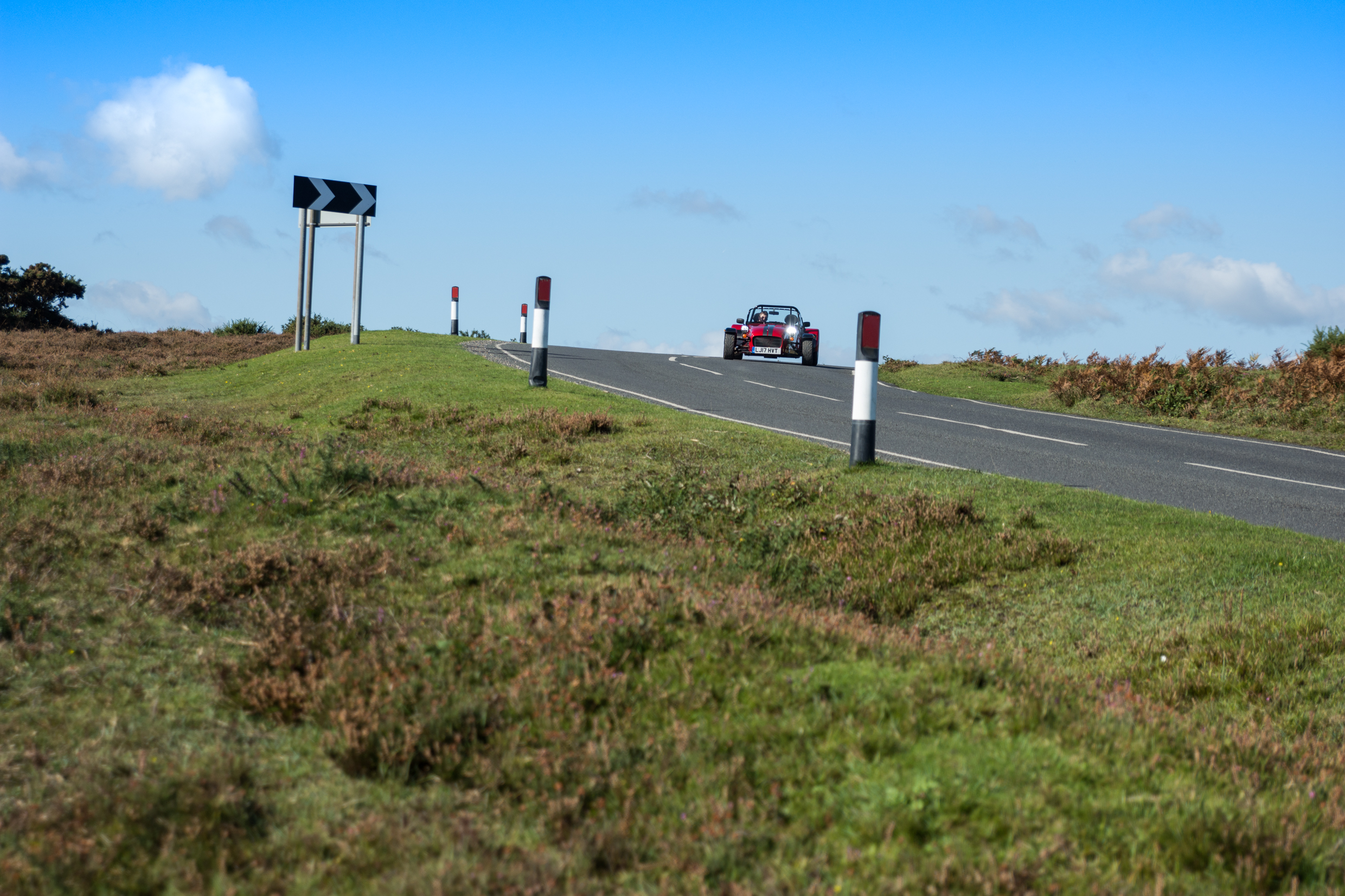 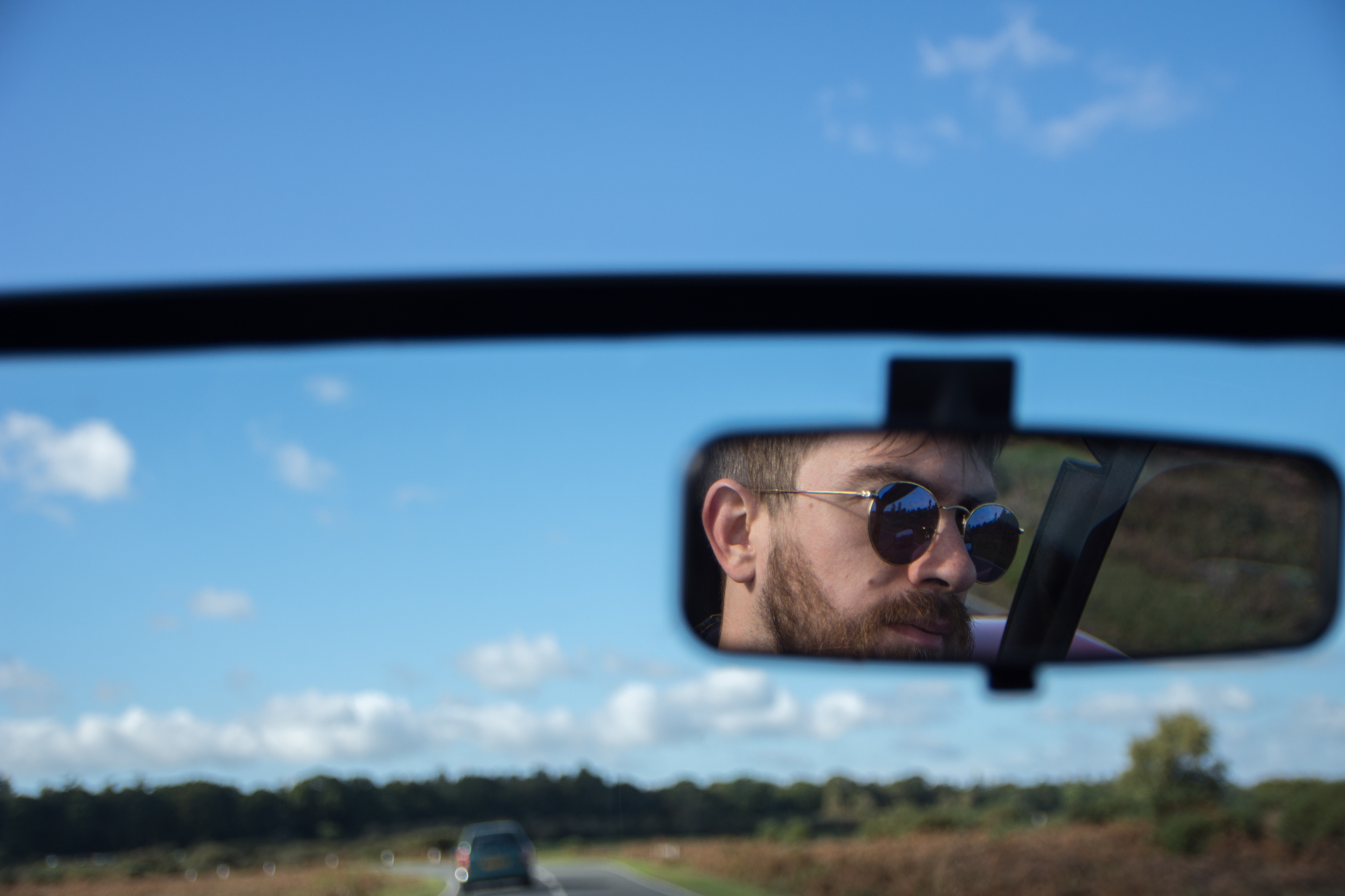 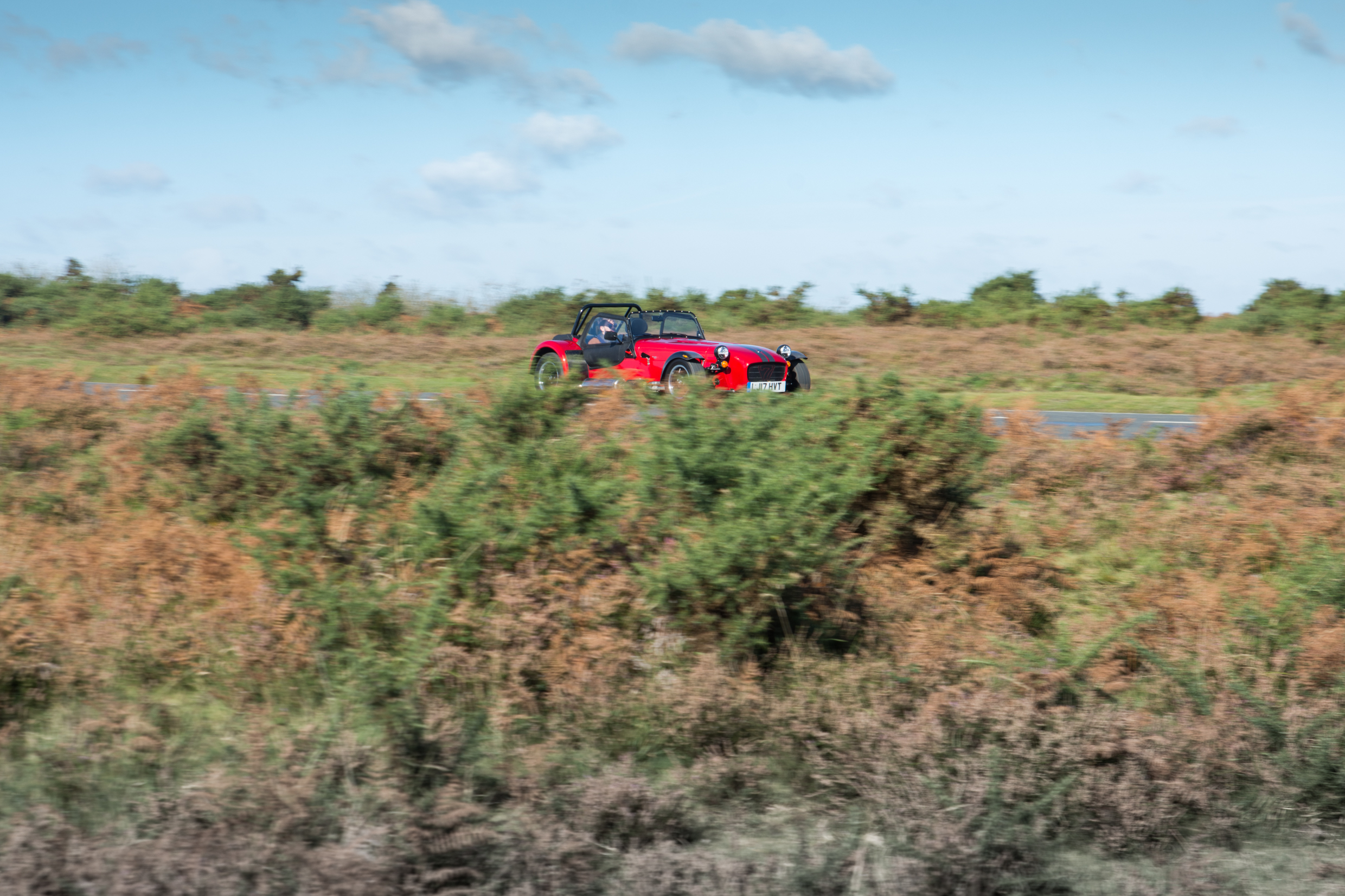 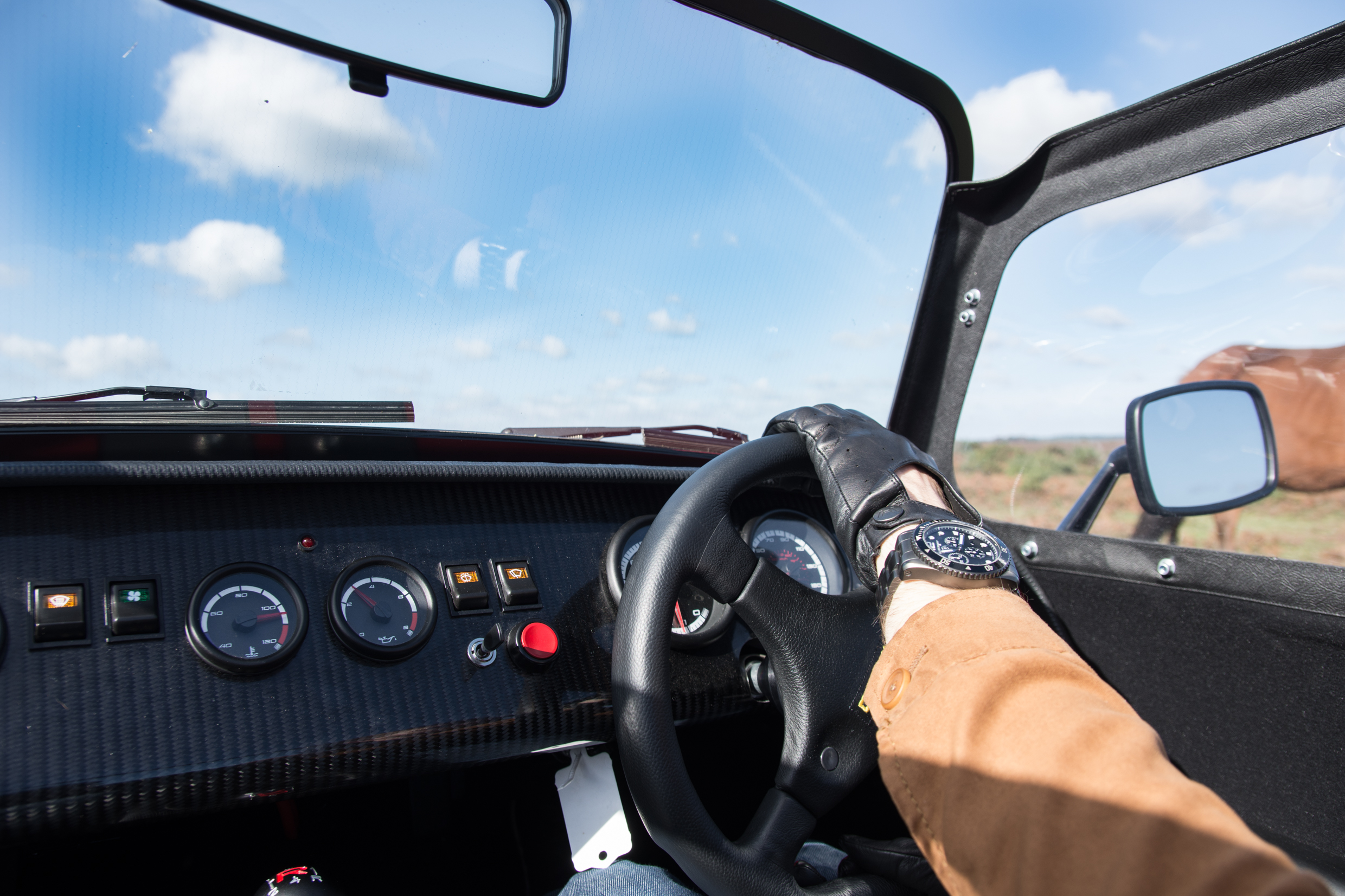 While not as difficult as an out-and-out race car, the 360R’s clutch bite is sharp and, with a relatively short first gear (even in the five-speed ‘box) you may find yourself kangaroo-ing down the road on your first few pull-aways.

Get rolling properly though and the gear shift itself is the dictionary definition of ‘rifle bolt’. Short, sharp, heavy, the stubby lever can be slotted from gate to gate without an inch of sloppiness.

Intriguingly, it doesn’t always like being rushed but you do have to fiercely positive with each shift to get the best out of it. After all, the Caterham Seven 360 is a car that needs to be driven.

Expect any help and you’ll be find yourself disappointed. Hop into the hot seat of any Seven means you’re on your own. 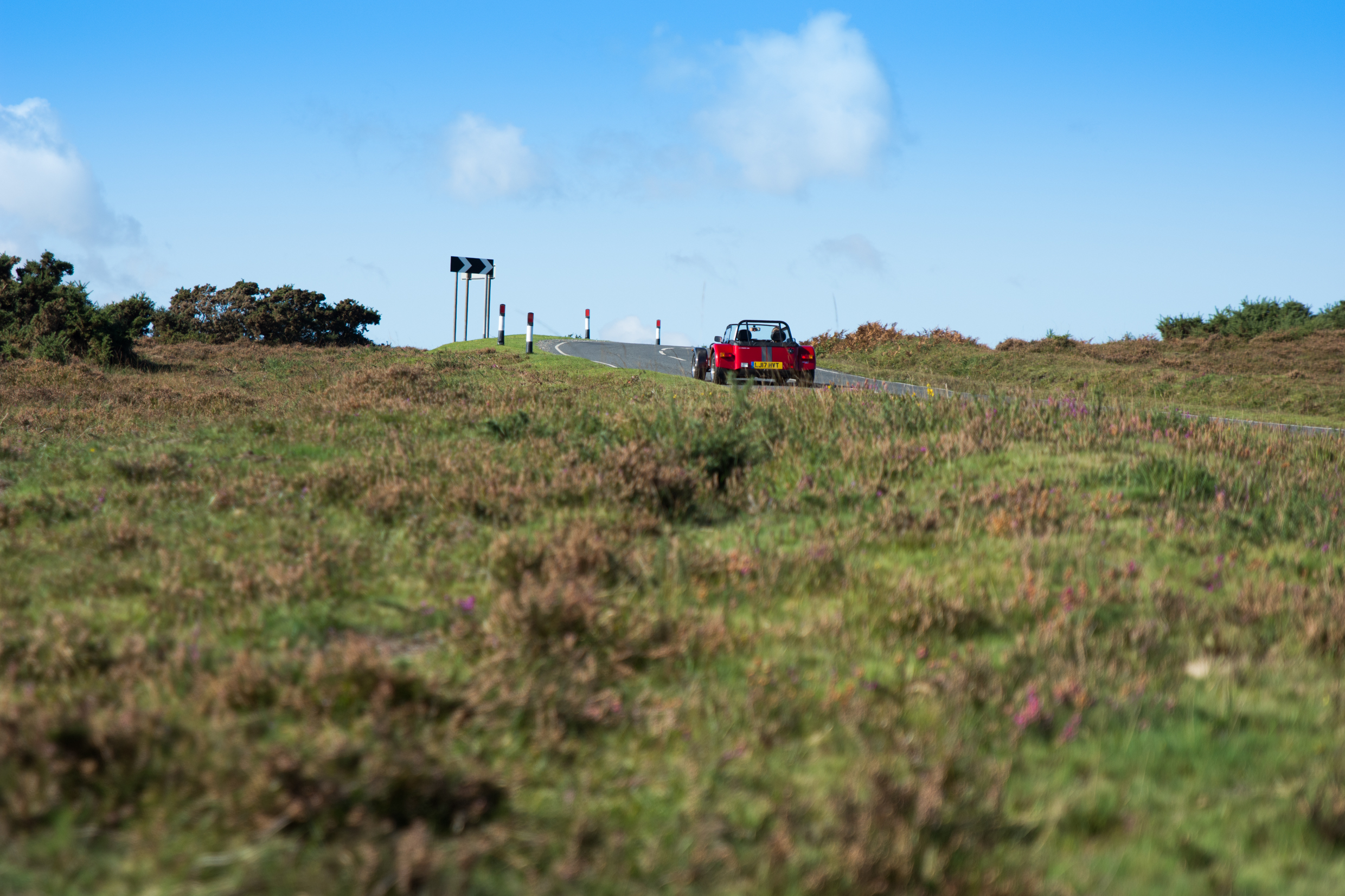 Don’t worry though. Even with a power-to-weight ratio of 325hp per tonne (that’s only a little bit less than the latest Porsche 911 GT3), the Seven 360R isn’t an intimidating beast to thread between the hedges.

Yes, the first few miles may be a bit of a culture shock but, with the engine up front giving plenty of grip on turn-in and your rear-end plonked almost right over the rear axle, judging the attitude of any Caterham quickly becomes second nature. Without anything to dampen the connection between you and the tarmac, it’s easy to interpret every message through the steering wheel and the seat of your pants.

Yes, your senses will be working overtime but that is where the complete and utter sense of accomplishment comes from in a Caterham. When everything clicks, there’s very little else like it (short of jumping in a thoroughbred racing single seater).

Yes, you can drive your Caterham to the nearest supermarket (we did) but, let’s face it, any Seven is never going to be your go-to car for the daily slog.

Sitting a few inches off the ground, a schelp along any motorway in a Caterham highlights the monstrosity of modern motoring; even Smart cars tower above you! Despite this, the Seven 360 is eminently usable. It’s not overly stiff (especially if you opt for the standard road suspension setup) nor intimidating. At the same time, there’s more power than grip, even in the dry, allowing you to indulge your inner hooligan at any opportunity.

The £30,000-mark may seem a lot for a weekend toy but, if you live for those uninterrupted Sunday drives, you could do a lot worse than the Caterham Seven 360R (and often for a lot more money) but you couldn’t find much better.