There are very few machines that cut quite as menacing a stance as the Ducati Diavel. Whether parked on the street or lined up in an aggressively-lit showroom, its muscular haunches, unforgiving air intakes and razor sharp lines ensure it catches the eye of anyone passing.

This, the 1260 S variant, represents the pinnacle of the range, and its famed Testastretta DVT 1262 engine is complimented by a set of equally mighty Öhlins upside-down forks and the presence of mean LED daytime running lights.

Admittedly, this isn’t the sort of machine we would instantly gravitate towards here at Flat-Out, but there’s something strangely enticing about its welcoming low seat height and steroid styling. It is the sort of machine that beckons you over, chews you up and then spits you out the other side.

Our first experience with the bike involved unloading it from a rental van, which with any other machine would be pretty simple. But even with the mirrors removed, the Diavel somehow managed to take up the entire cargo section of a mid-sized commercial vehicle. Without stating the bleedin’ obvious, it is a big bike.

But the real fun began once the Diavel was rolled off its ramp and on to our gravel driveway, where a quick 180-degree turn was required to safely stash it away in the Flat-Out garage. Despite the slick LCD display offering a Sport, Touring and Urban engine mapping and traction control settings, the back wheel would not stop spinning on the loose surface.

“It is a curious machine, plucking elements from numerous genres and melding them into one strangely addictive package”

It turns out the 1,262cc V-twin engine doesn’t really have a soft setting and anyone making the jump over from similarly powerful four-cylinder might find that low-speed aggressiveness takes some time to get used to. But then it is called the Diavel, so what did you expect? 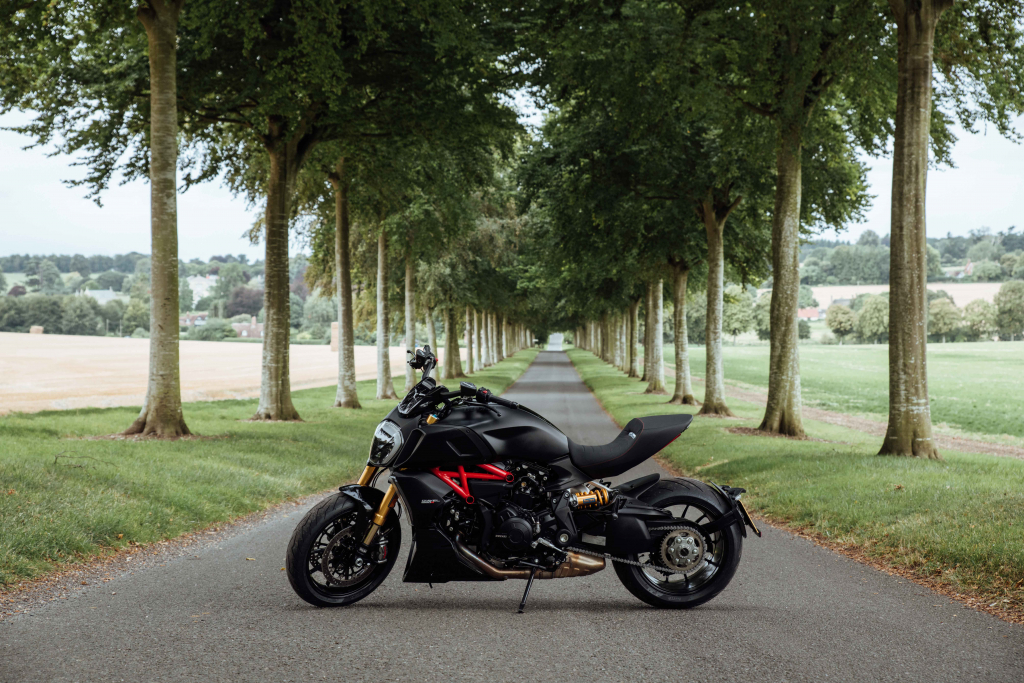 Get the bike up to speed and it is a different story, with most mundane daily cruises dispatched neatly with Touring mode selected. Controlling throttle input is still a little snatchy around town, but it doesn’t take long to adapt the riding style to suit.

Find an open road, with some gently curving bends, enter Sport mode and prepare to be blown away by the Diavel’s performance. Complete with Ducati’s own quick-shifting system, it is staggering just how quickly the miles per hour clock up on the digital display.

An elongated chassis with 1600mm wheelbase ensures the Diavel transfers all of its 157bhp through the back tyre and into the Tarmac, albeit with a temptation to constantly light up the rear. That said, there’s never a sniff of a wheelie or a worry that the brute is going to buck you off its back. 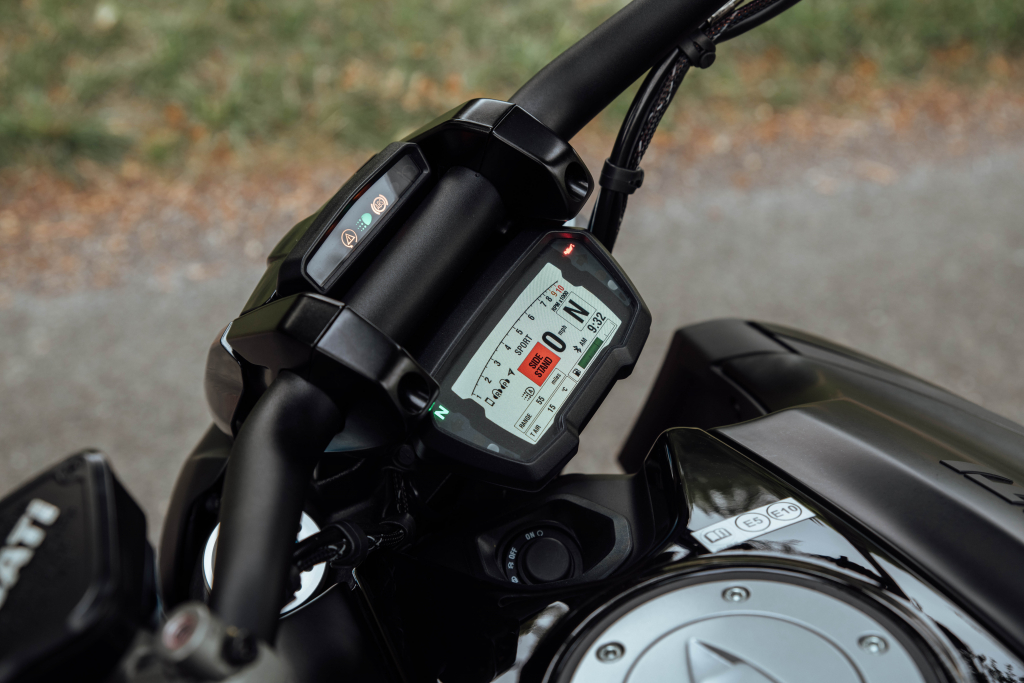 That’s thanks to a very clever traction control system, which manages to keep check on the power without proving too intrusive. Plus, Ducati’s brilliantly cosseting seat majestically pins the rider in place and makes it easy to adjust the body position from a laid back cruise to a full on, tucked-up racing pose.

All of this performance is accompanied by one of the finest exhaust notes to roll out of a manufacturer’s showroom. A deep bark on the overrun as the stubby twin cans clear their collective throats, winding up to a Ferrari-beating wail as the engine’s revs climb. It’s ludicrously addictive.

“At £19,985 , it is eye-wateringly expensive. But making deals with the devil has never been cheap”

However, our week with the Diavel included a lot more than just spanking it across some favoured country roads, as we decided to take it on a 200-odd mile round trip in order to save some time and beat the back-to-school traffic. 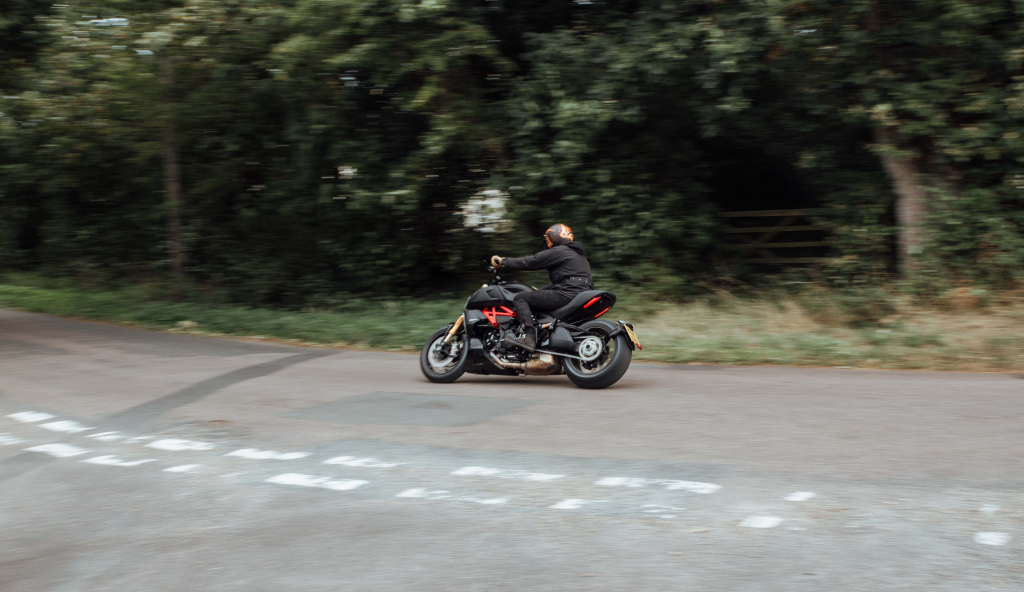 Surprisingly, Ducati’s mean machine majestically doubles-up as a fairly convincing tourer – its 17-litre tank and claimed 52mpg fuel economy figure means petrol station stopovers are few and far between, while that brilliantly snug seat delays the onset of bum soreness by quite some time.

In an act of pure stupidity, I managed to smash my back in an unfortunate but childish accident just days before the long trip, and despite hobbling around like an octogenarian, I managed to complete the journey without bursting into tears.

The Diavel won’t ever trouble the Multistrada, BMW GS line or Honda’s sumptuous Gold Wing in the comfort stakes, but it should be commended for trying – especially as its unwavering performance will happily spank most superbikes on the straights. 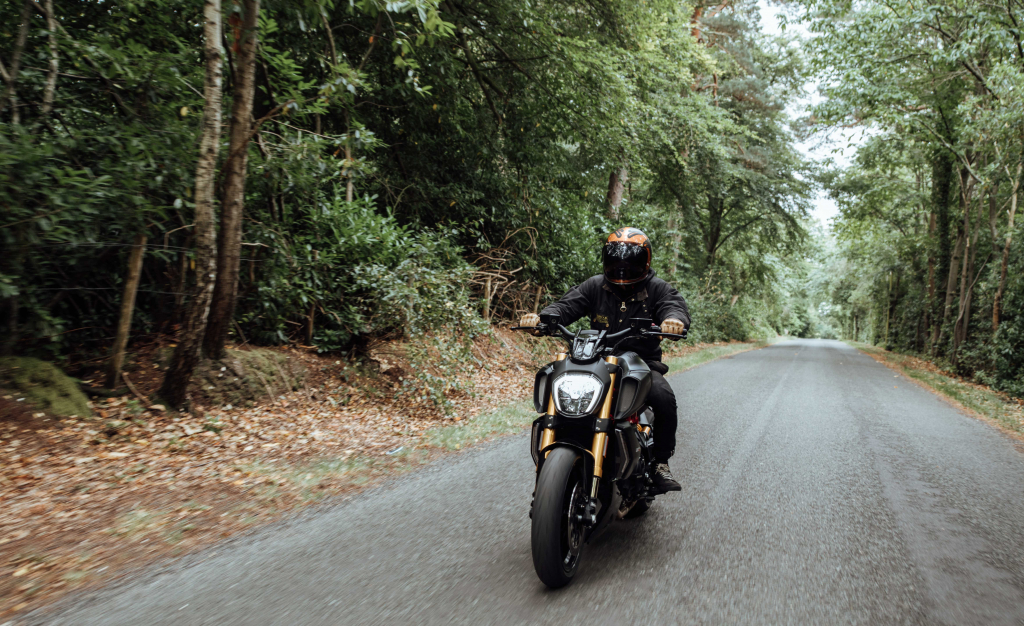 It is a curious machine, plucking elements from numerous genres and melding them into one strangely addictive package. At £19,985 and easily specified to almost £25,000, it is eye-wateringly expensive. But making deals with the devil has never been cheap. 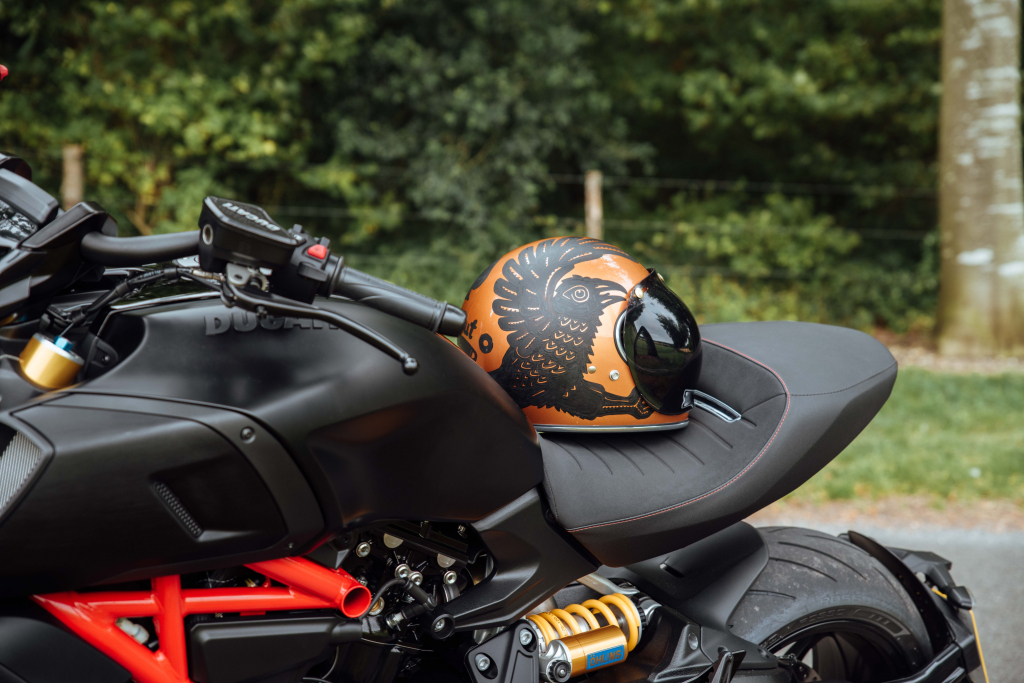