The Ford Focus ST has always delivered incredible bang for your buck. Ever since the early days of the first generation ST170, it offered warmed-up performance that didn’t cost the earth. And for that reason alone, it has proven to be extremely popular.

But as with anything in the automotive industry, where progress is the key to survival, the humble ST has developed from a fairly approachable quick hatch into something that will happily devour a track day and shred a driving licence in seconds. 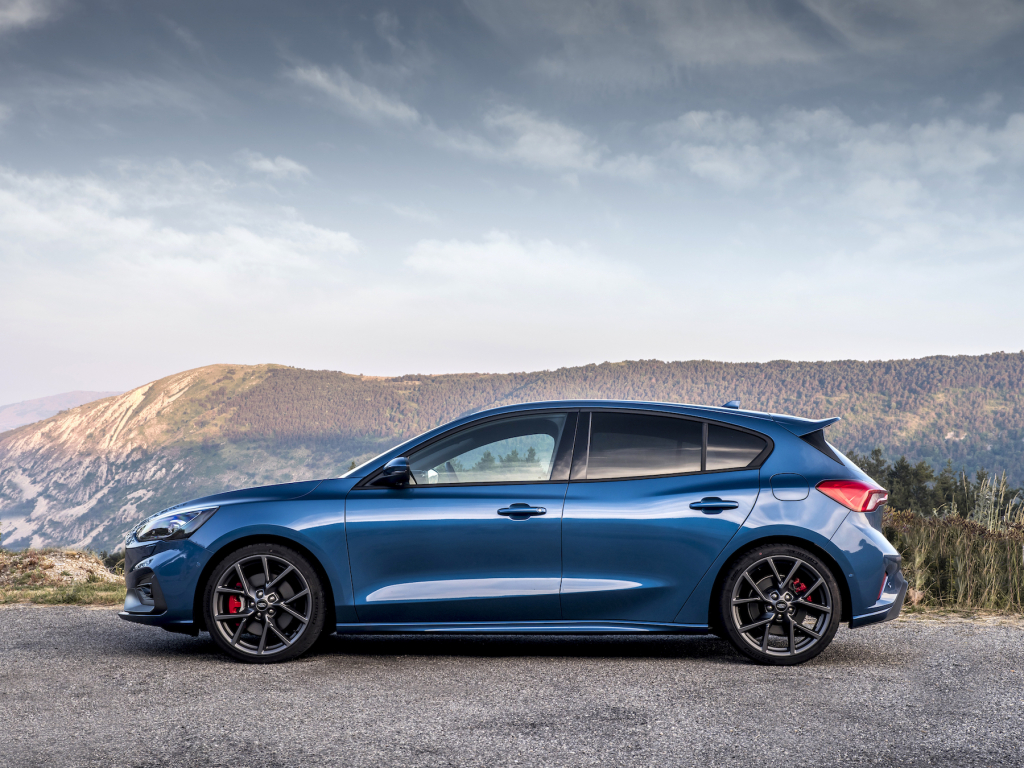 As a result, the latest generation ST has matured and is arguably the most visually subdued to date, looking not too dissimilar than the regular family hatchback upon which it is based.

Even the head honchos at Ford’s Performance tuning department admit that building upon such a technologically accomplished platform (the standard Focus is excellent in itself) was tricky, so instead they focussed on introducing a new, more powerful engine and integrating technologies developed for the likes of the GT, Mustang and RS.

“A hot hatch has always been about thrills with the ability to transform back into a relatively sensible, comfortable drive”

As a result, the new ST, which still comes in estate or five-door variants, now features a 2.3-litre petrol unit pinched from the previous generation Focus RS. It shuns the general trend for downsizing and as a result, develops a whopping 280hp and 420Nm of torque at the heady heights of 5,500rpm. Perfect for those that like to wring the neck of their performance machines. 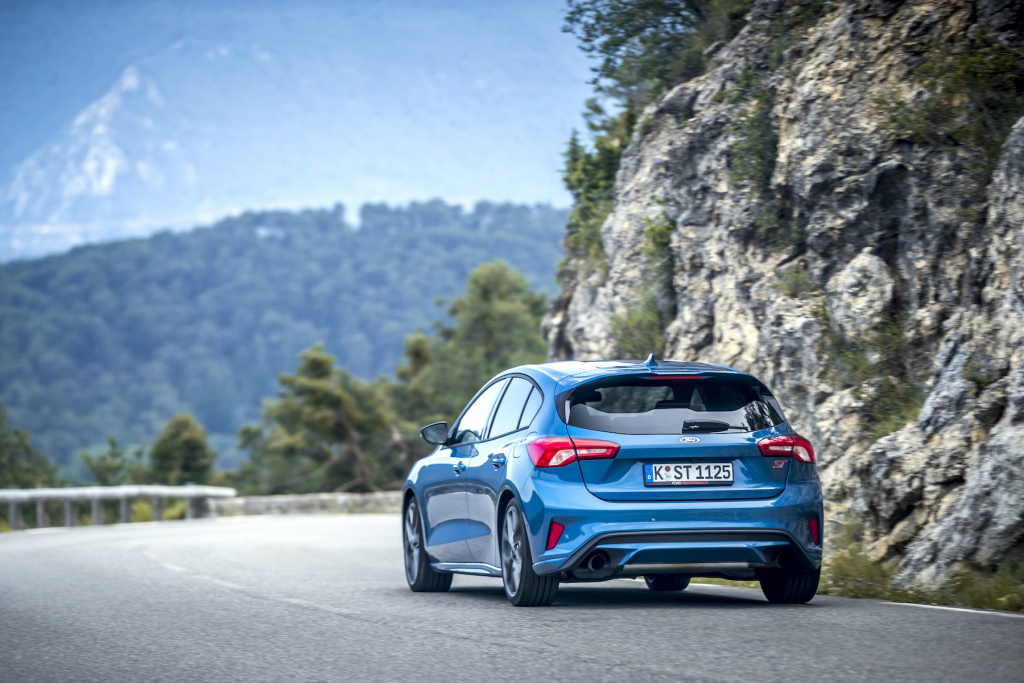 The exterior styling will likely be one of the most dividing things about new ST, with some bemoaning the fact that it just doesn’t look aggressive enough and the rest of the world enjoying the fact it can be driven to the shops without attracting the attention of spotty teenagers and disgruntled traffic cops.

Take a long, hard look at the exterior and there are only a few subtle changes to the basic focus platform, namely a unique alloy wheel design, revised upper and lower front grille designs and lower wing elements that improve airflow and increase stickiness on the road/track.

Engineers have opted for a twin exit exhaust system, which goes some way to prove this generation is wearing its practical pants. The previous gen’s centre exit pipes prevented customers from adding a tow bar. Not so now. 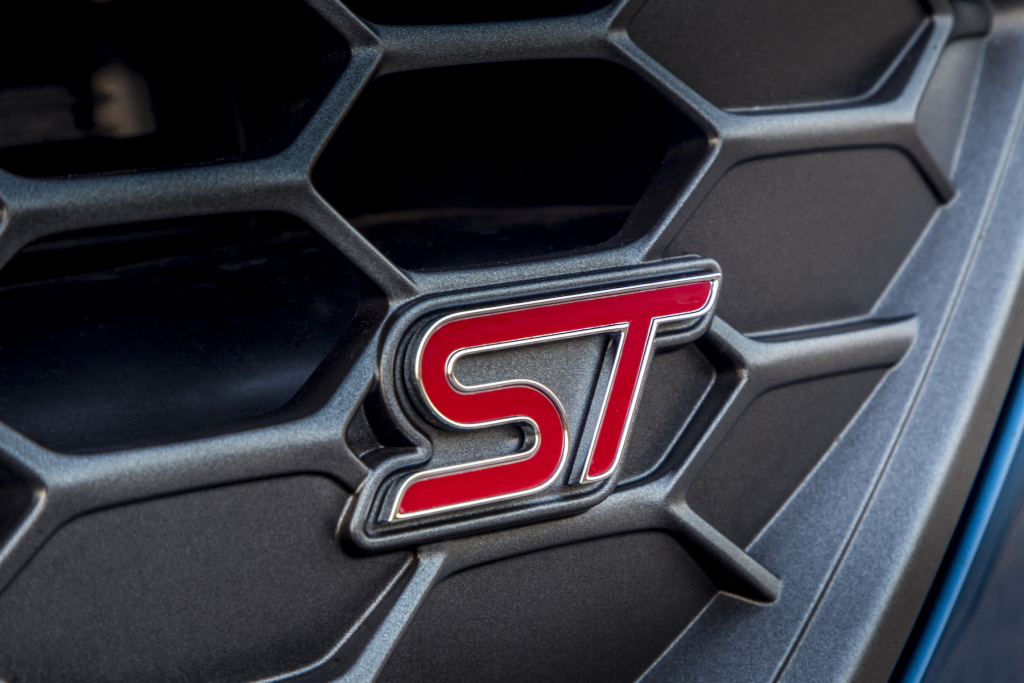 It’s a slightly different story inside, where racy Recaro sports seats reside, metallic pedals and little nods to the ST plastered here and there. Despite offering more head and legroom for passengers (there’s that practicality again), it still falls some way behind the fit and finish of a Golf GTI, for example.

“On bespoke Michelin tyres and a hot test-drive surface, the Focus ST clung to the Tarmac with a fervour that proved a bit too safe and sensible”

Apart form that, the cabin borrows most of its parts from the model upon which it is based. The eight-inch touchscreen infotainment system is slightly carelessly bolted to the dash, but comes with Android Auto and CarPlay as standard.

There’s also an excellent B&O sound system for when you tire of the synthesised exhaust note being pumped into the cabin. 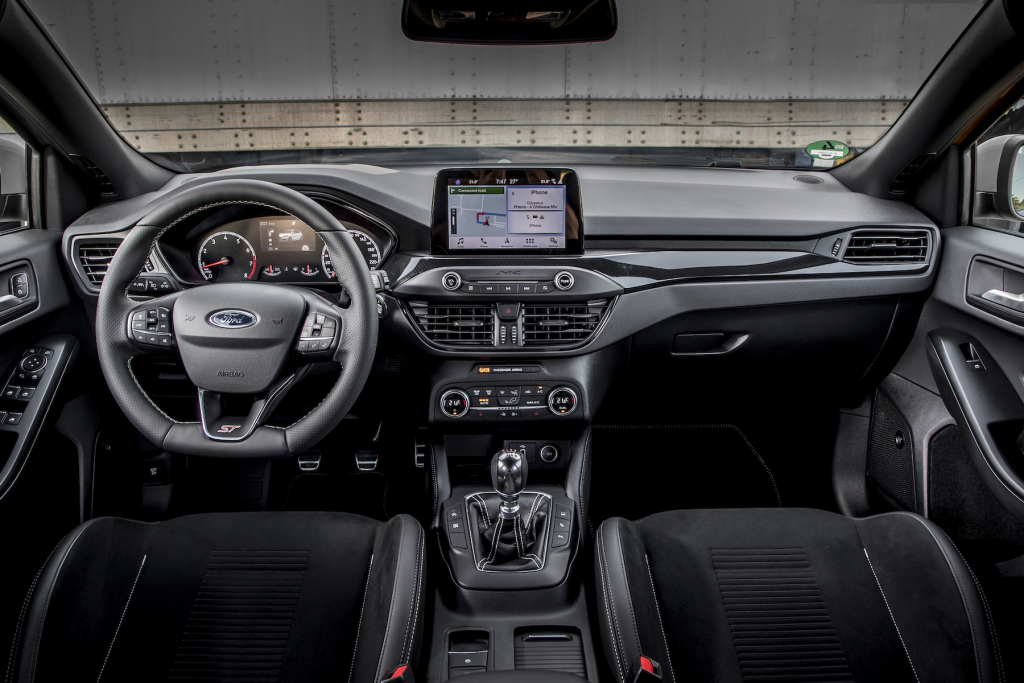 Several motorsport and performance car-derived technologies see the ST boldly go where few others have been before. Bespoke twin-scroll turbocharging with an anti—lag system borrowed from the epic Ford F150 ensures turbo boost is smooth and predictable, while an electronic limited slip differential at the front wheels allows for more power to be delivered to the wheel with least traction.

The 2.3-litre petrol engine, which is a revised version of the outgoing RS’s unit, kicks out an impressive 280hp and a class-leading 420Nm of torque. That grunt translates to a 0-62 sprint time of 5.7 seconds.

Entertainingly, Ford has also pinched Launch Control form its RS department, while the anti-lag tech apparently allows for flat-shifting during sprints away from the traffic lights. 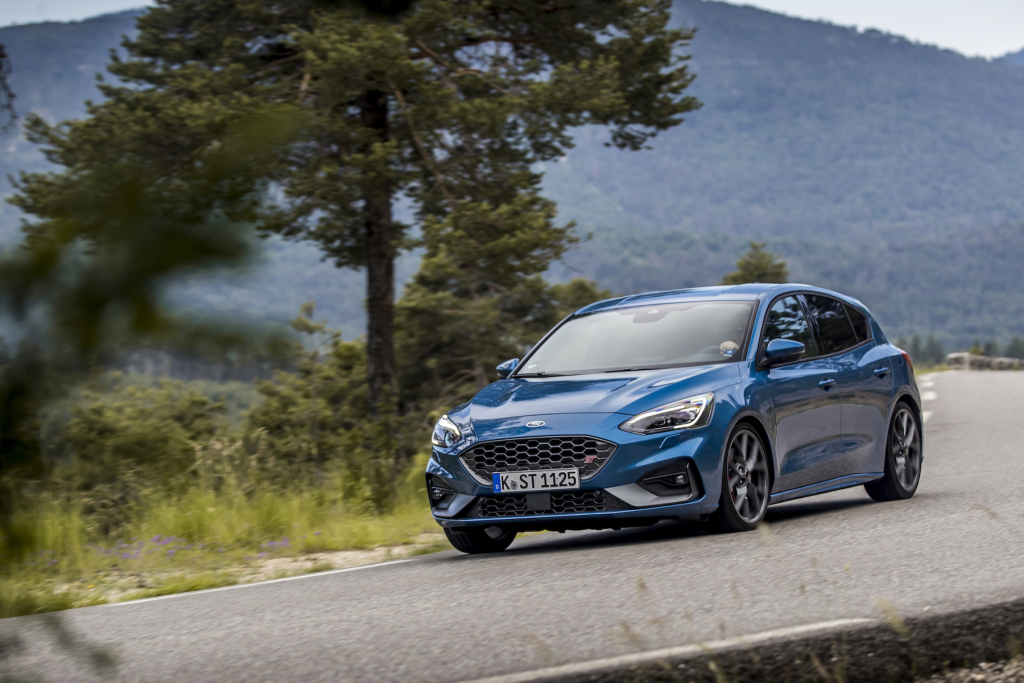 There’s also Continuously Controlled Damping tech that monitors suspension and makes micro adjustments for optimised ride quality and cornering. This means handling is now sharper than ever and the oodles of torque steer has been banished to just a slight murmur in the hands.

Drivers don’t need to master the art of heel/toe downshifting either, as a clever rev-matching system comes into play when the car is switched into Sport mode and above. There’s also a Race mode for those who like the traction control to take a back seat.

“Fast Ford fans still have a lot to get excited about”

Although infinitely more grippy and direct through corners (the steering rack is still lightning fast), this technology has taken away some of hot hatch character of its predecessor. On bespoke Michelin tyres and a hot test-drive surface, the Focus ST clung to the Tarmac with a fervour that proved a bit too safe and sensible in our opinion and the savage sprint away from the line doesn’t feel all that savage. 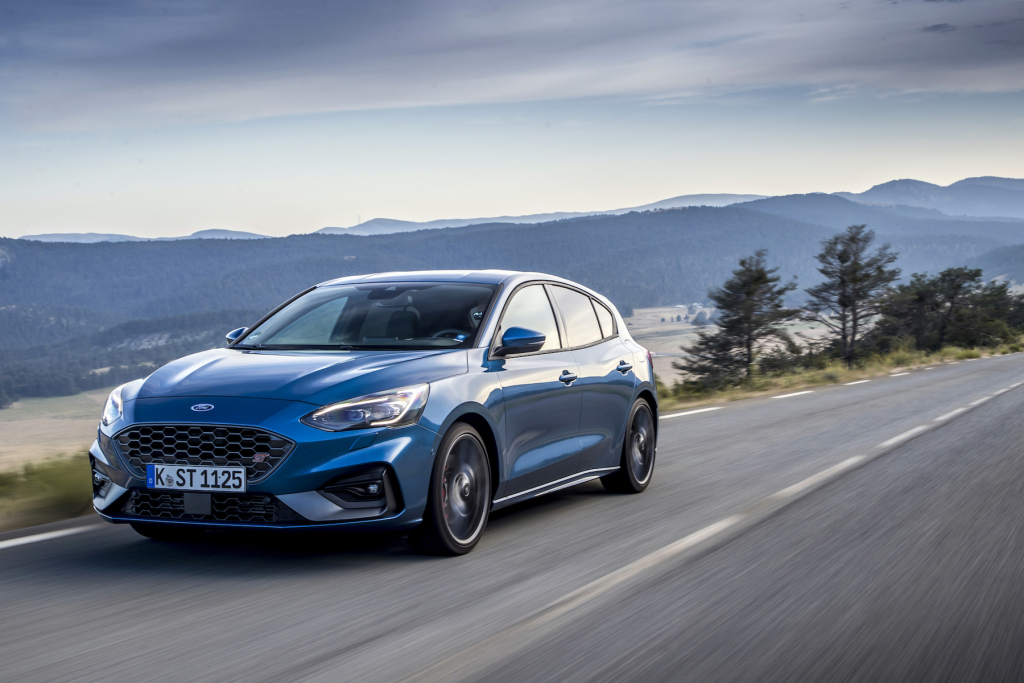 But then a hot hatch has always been about thrills with the ability to transform back into a relatively sensible, comfortable drive and this latest Focus ST seems the most adept at this than ever before. The ride is certainly firm but not so much that it makes longer journeys a pain.

For those wanting the ST’s performance without the associated fuel bills, Ford offers a 2.0-litre diesel version, badged EcoBlue, which returns an impressive 58.8mpg on the combined cycle.

Alas, this oil-burning example feels very different to its sprightlier petrol sibling, as it does away with the aforementioned electronic slip-differential and the adaptive suspension system, while its power is almost 100hp down. 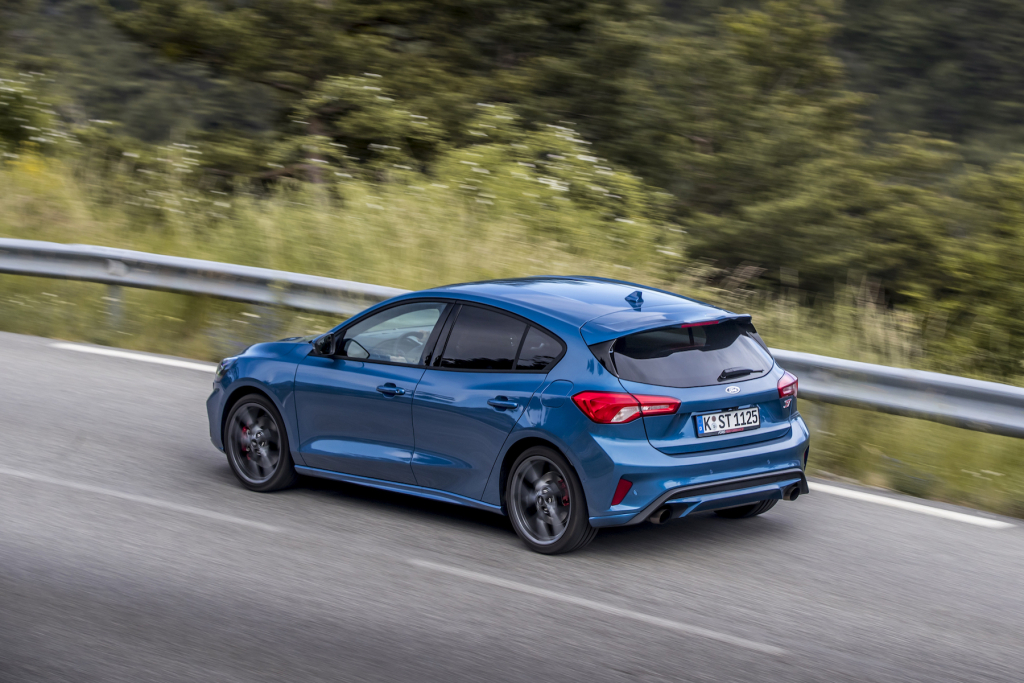 As a result of these performance-enhancing tweaks, the new Focus ST sits somewhere between the Golf GTI and the Honda Civic Type-R when comparing to rival models – feeling more unhinged than the VW but not quite as Banzai as the Type-R.

Ford also now has to consider Hyundai as a rival, as its excellent i30 N Performance boasts similar amounts of power, an e-diff and adaptive suspension for around £2,500 less. And that comes with a seven-year warranty.

But fast Ford fans still have a lot to get excited about, because this ST feels closer to its larger RS in terms of the on-board track-biased tech than ever before. It also does a more convincing job of being a comfortable and reasonably fuel-efficient daily driver than it predecessor. 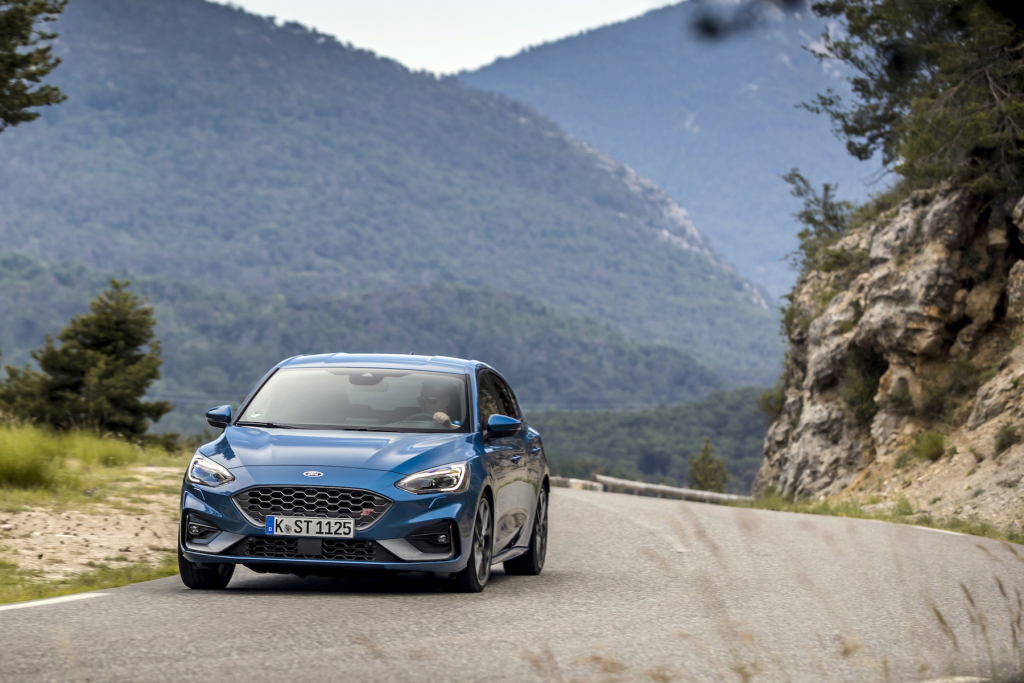 Part of us misses the ‘no-frills’ fun provided by the brilliant but stupidly thirsty Mk2 Focus ST and the slightly unhinged nature of the Mk3, but this car is a great all-round package. That’s progress. 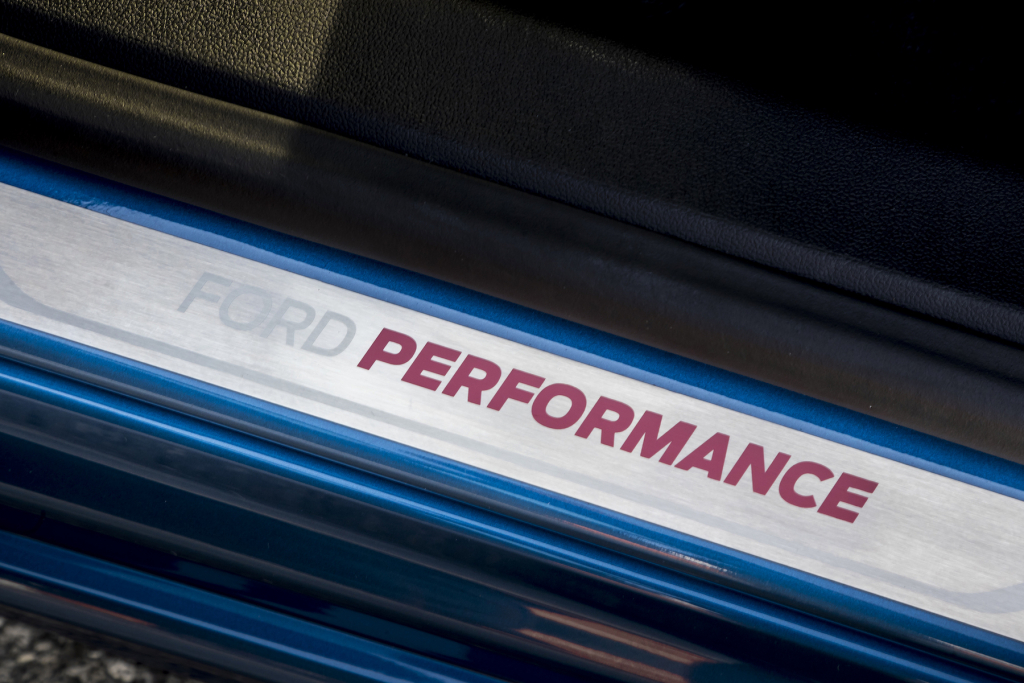