The world doesn’t really need another SUV but try telling the major manufacturers that. Long story short, they sell like hot cakes, so expect many more to come in the future.

However, Jaguar has at least fashioned a small SUV that looks genuinely desirable, rather than a gawky, bulky and slightly awkward off-roader that can’t actually venture off road and is less practical than a hatchback, despite its swollen proportions. 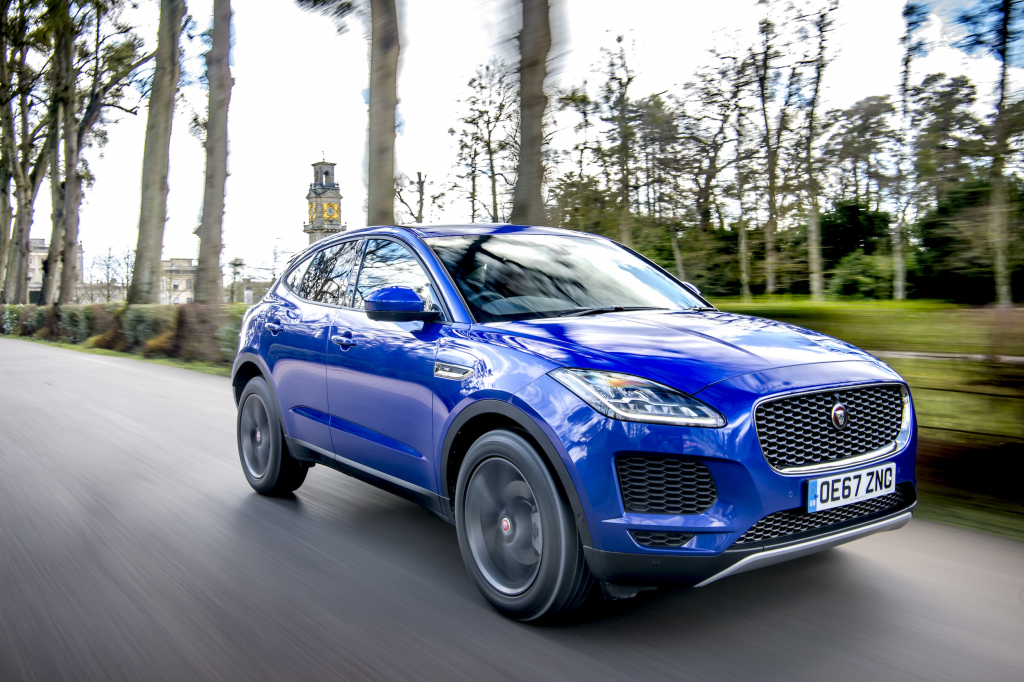 Ahem. Not that we have anything against SUVs.

Even in the most basic ‘E-Pace’ trim, the sharp lines and blatant F-Type inspiration shine through, while the sportier R-Dynamic models in SE or HSE specification look genuinely smart. 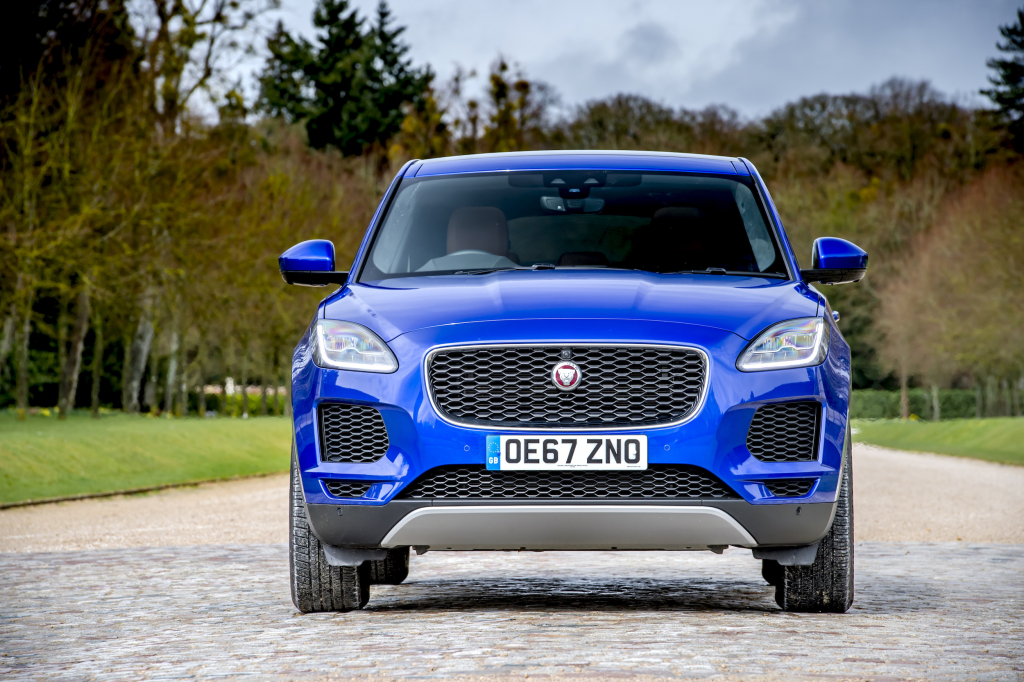 In fact, this is the only vehicle in its class that can be optioned with monster 21-inch alloys and we have to say, they look absolutely brilliant on the squat, muscular frame of the athletic R-Dynamic models.

Thankfully, the Jaguar E-Pace also drives particularly well too, so long as you don’t expect jacked-up hot hatch levels of performance in the range-topping (and eye-wateringly expensive) P300 petrol models. 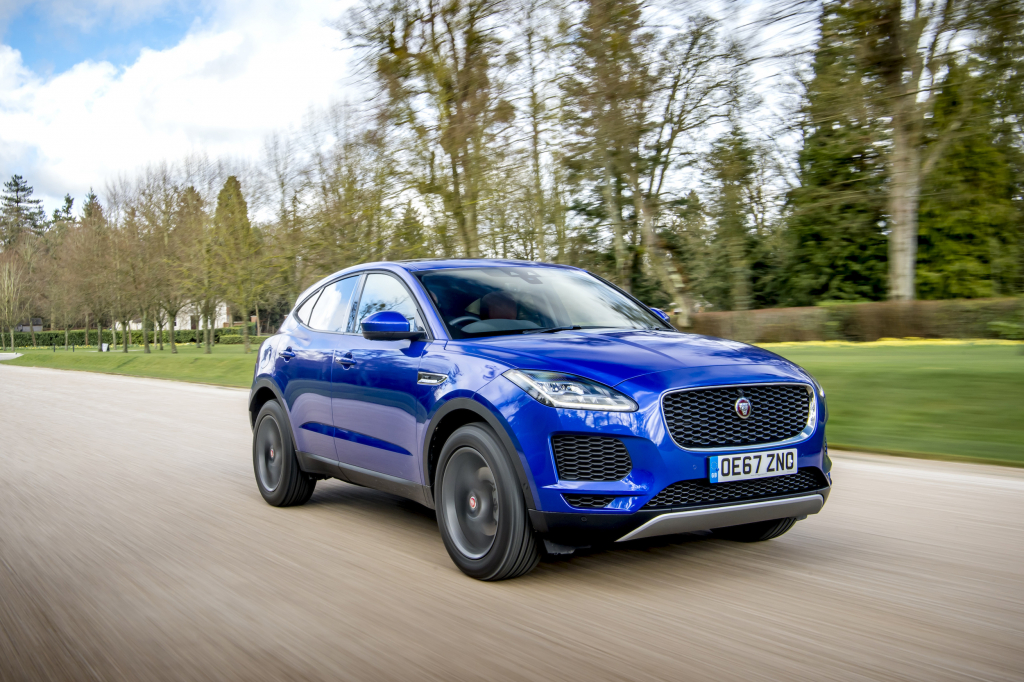 Steering is sharp and accurate, without every feeling too pointy or overtly sporting, while the suspension is well judged considering the lofty ride height and hefty amount of bulk it has to transport around.

That said, the massive 20-inch alloy wheels make the ride feel a bit firm, especially on rutted country roads, but it is a genuinely fun SUV to throw around said B-roads thanks to its diminutive footprint and excellent chassis. 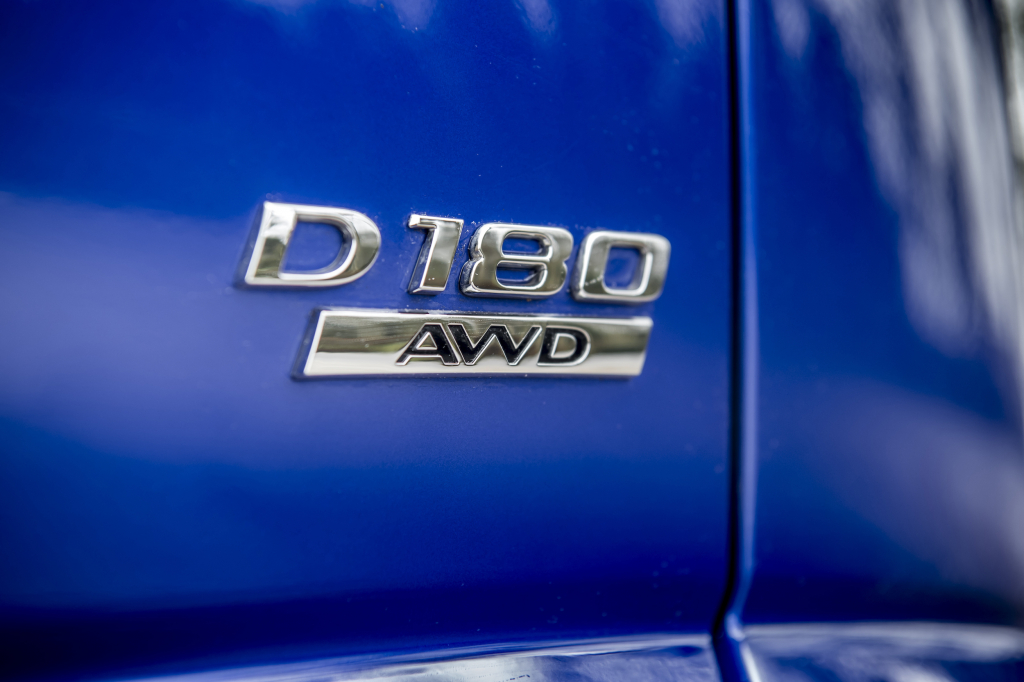 Let’s also tackle the issue of off-road ability, as the modern SUV is so far removed from the 4x4s upon which they are based, that many don’t bother asking any more.

The E-Pace comes in both 4×2 and 4×4 drivetrains, with Jaguar insiders claiming most will plump for the added security of all-wheel-drive, but it doesn’t quite have the terrain-conquering abilities of its Land Rover brethren. 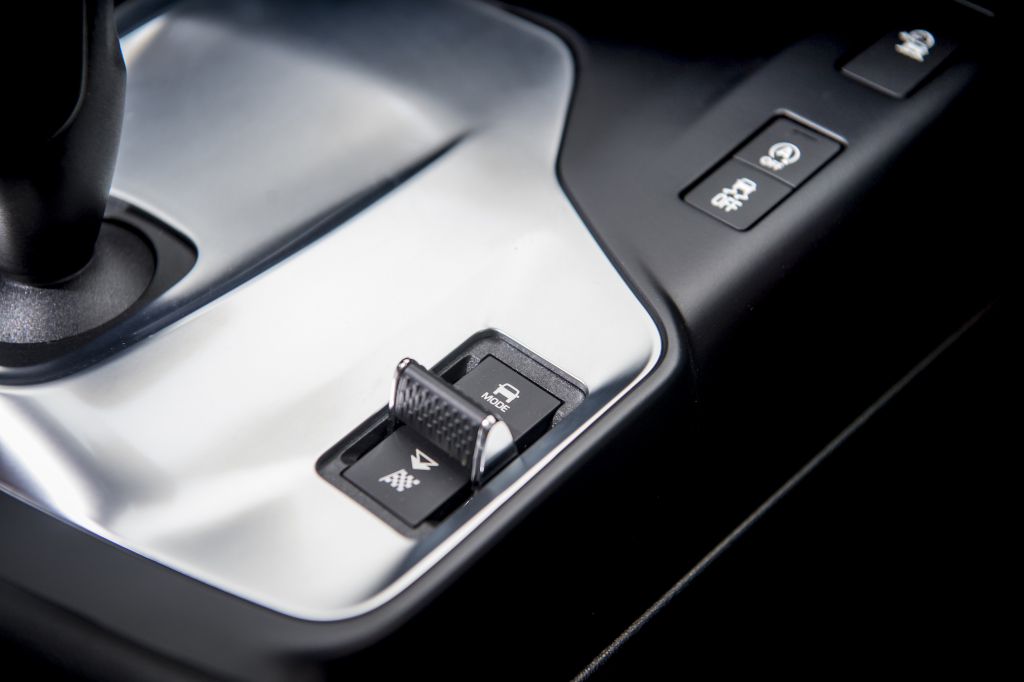 Instead, it receives a snow and gravel mode on the drive selector switch, which lets the traction control system know that things could be slippery underfoot. It’s all that most drivers will ever need but if you are thinking of doing some serious mud-plugging, it might be a good idea to look elsewhere.

Inside, Jaguar has lavished the interior with plenty of modern, premium-feel touches, including beautiful burnished metal surrounds on the vents and leather-clad flying buttress-style grab handles.

“Steering is sharp and accurate, without every feeling too pointy or overtly sporting”

Again, Jaguar’s design team has taken plenty of inspiration from the F-Type but it has been blown up to suit the surprisingly cavernous interior of the E-Pace. 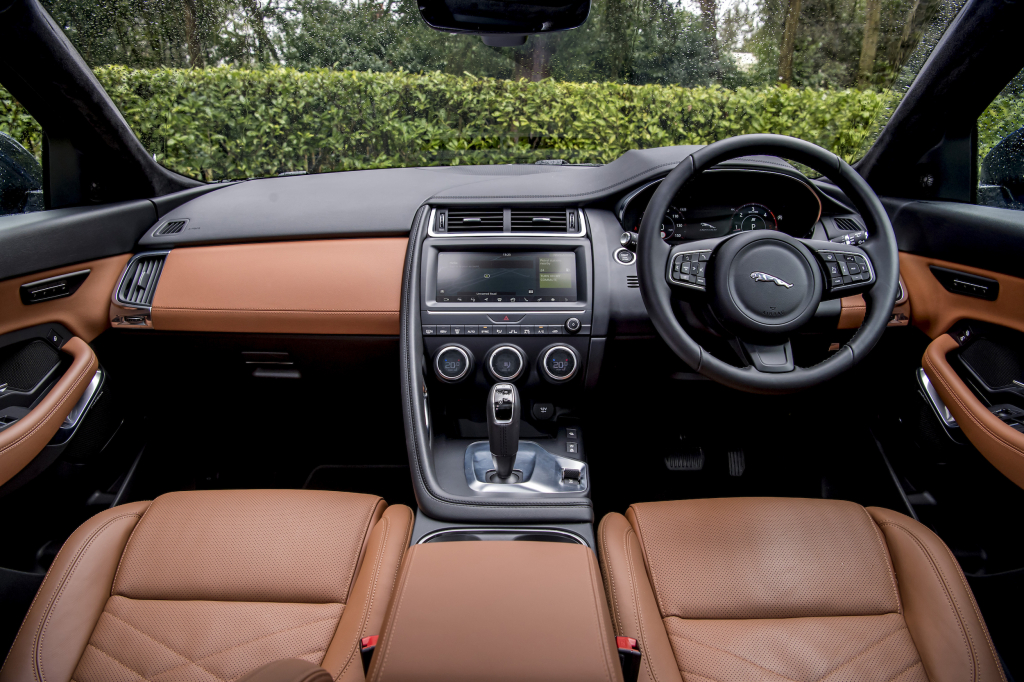 Passengers in the rear get loads of head and legroom thanks to some very clever packaging and the optional panoramic sunroof lets masses of daylight flood into the cabin for an airy feel.

The only downside is inside and concerns Jaguar’s 12.3-inch InControl Touch Pro sat-nav and media system, which looks fantastic but isn’t as quick or as intuitive as it could be. 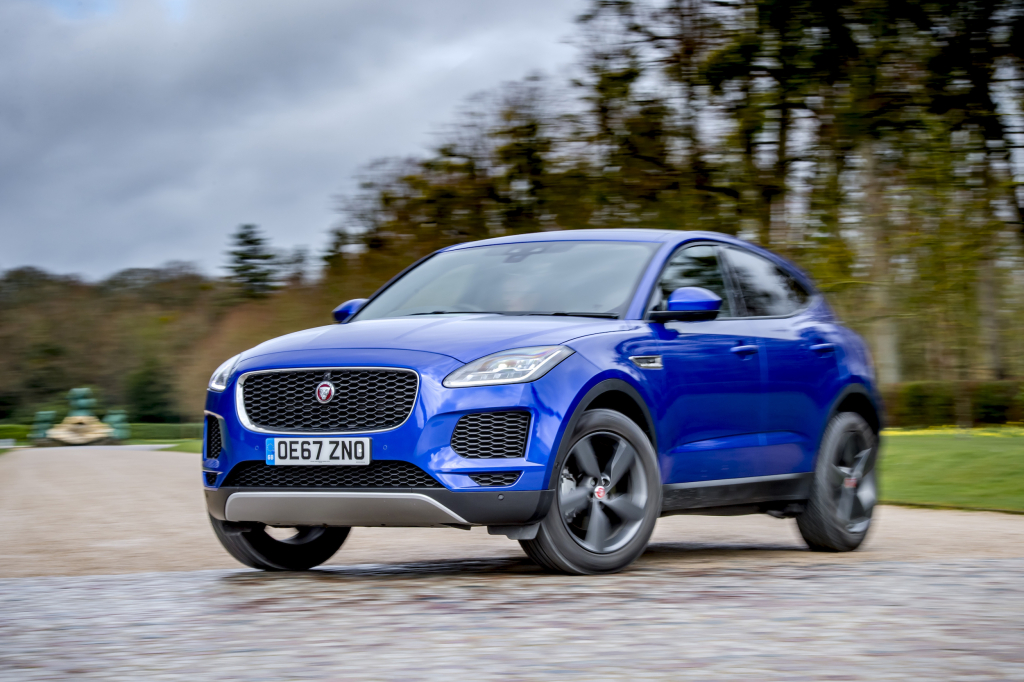 This navigation system borders on the frustrating thanks to its clunky interface and unclear mapping, which would be forgivable if you could stick Android Auto or Apple CarPlay on instead. But you can’t.

Instead, Jaguar pens you in to its InControl Apps, which just aren’t as good as those developed by the major OS manufacturers. 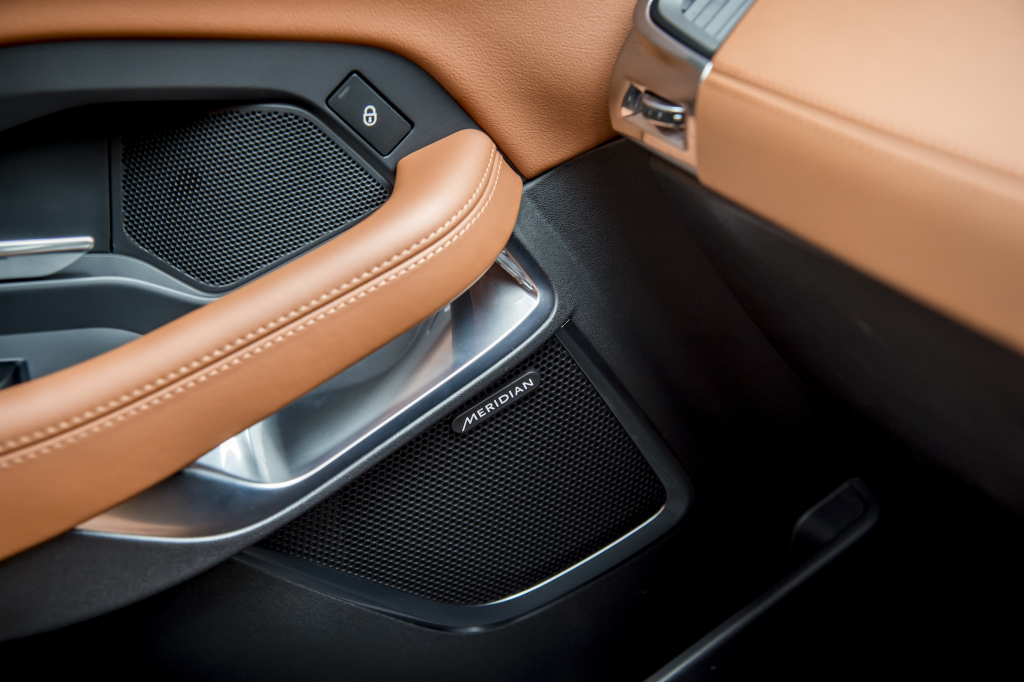 These things can be forgiven though (and will likely be updated when the model is refreshed), because the E-Pace drives so well and looks absolutely fantastic in our eyes.

Plump for the higher-powered diesel engine and you get a machine that develops a staggering 500Nm of torque and manages to accelerate from 0-60mph in a respectable 7.4 seconds. 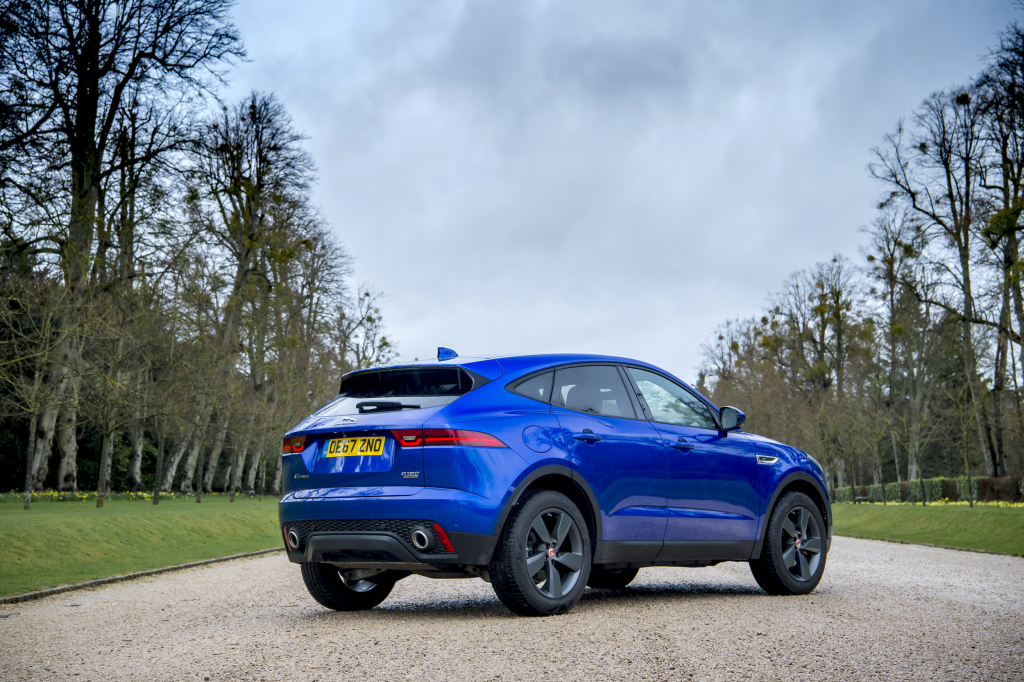 Unfortunately, you can’t option this powerplant with the manual gearbox, which is a shame because the auto isn’t the snappiest in the world, but leave it to its own devices and it’s perfectly happy.

The E-Pace is a fantastic proposition in a market that contains the BMW X1, Audi Q3 and Mercedes-Benz GLA, as it’s by far the easiest on the eye and the most enjoyable to drive.