There was a time when the humble hot hatch wouldn’t even be a consideration for a wealthy middle-aged toilet roll salesman with a penchant for fast cars.

They were cheap, questionably bolted together and open for the sort of Sainsbury’s car park modification that had your typical Daily Mail reader turning up their noses.

But times have changed and the game has moved on. Hot hatch performance is now bordering on the molten, the engineering involved would shame some F1 cars and the price tags have escalated to the point where daydreaming 18-year-olds don’t even bother thinking about them. It also means a little slice of the hot hatch soul has been lost along the way. 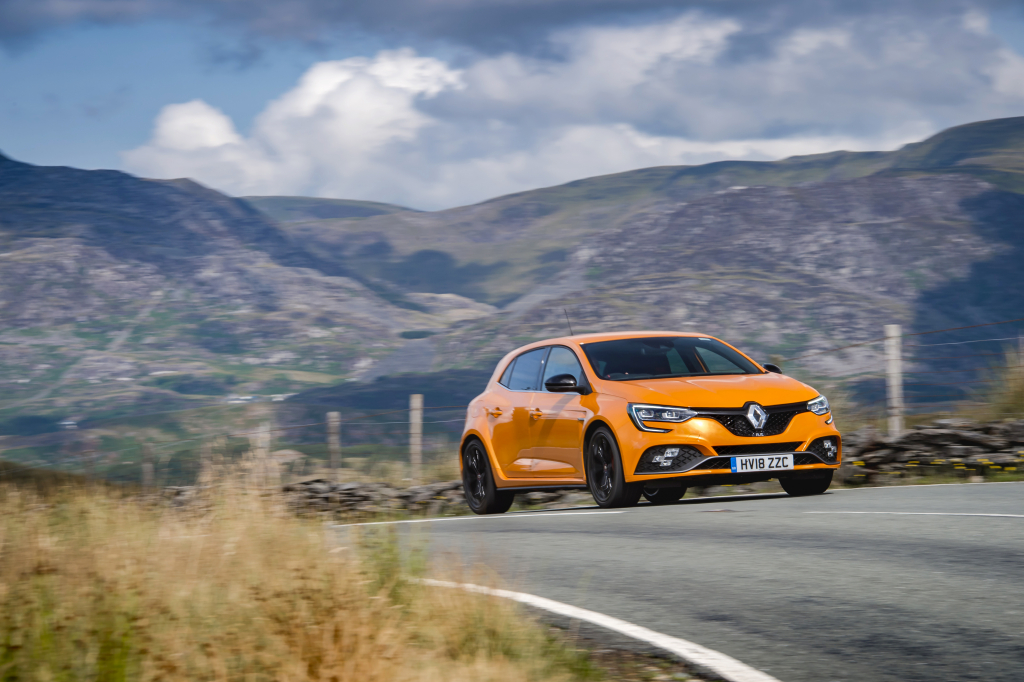 The Audi RS3, the Mercedes-AMG A45, the Ford Focus RS and the Golf R may have recalibrated what we thought was possible in a hot hatch, but the Renault R.S products have long been the choice of the track day connoisseur and the purist.

Big brother to the Clio R.S (which was widely panned in its latest iteration), the Megane has been offered in many high performance guises throughout its lifetime, from the excellent rollbar-clad R26.R to the more recent Renault Sport 250, while those who love to push a car to its limits have long revered the optional Cup chassis offered by the French marque.

This latest offering has some seriously stiff competition but it could signal a return to form for Renault, as it delivers a stonking 280hp from the diminutive 1.8-litre turbocharged petrol engine and packs race-derived technology that arguably makes it one of the most engaging drives of the bunch. 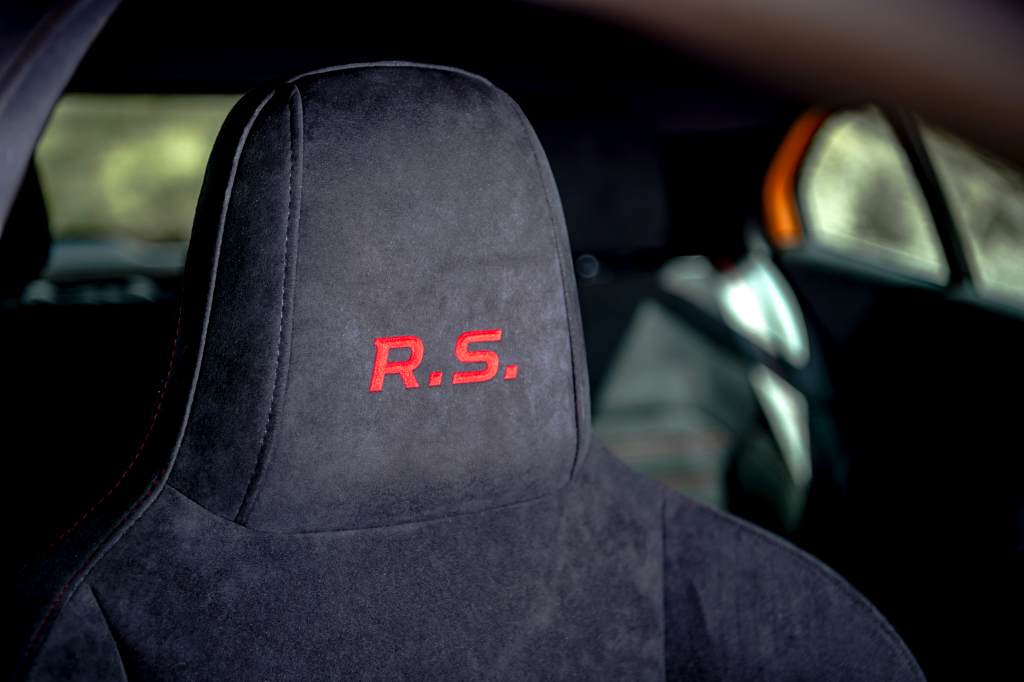 It’s very difficult to miss the Volcanic Orange paintwork of our test car, which rides on R.S Estoril Gun Metal Grey 18-inch alloy wheels and adopts a tarmac-scraping position thanks to the racier Cup Chassis.

Blistered wheel arches, a small rear spoiler and extended sills and skirts ensure passers-by know it means business, but it does this without being overtly gauche or yobbish. 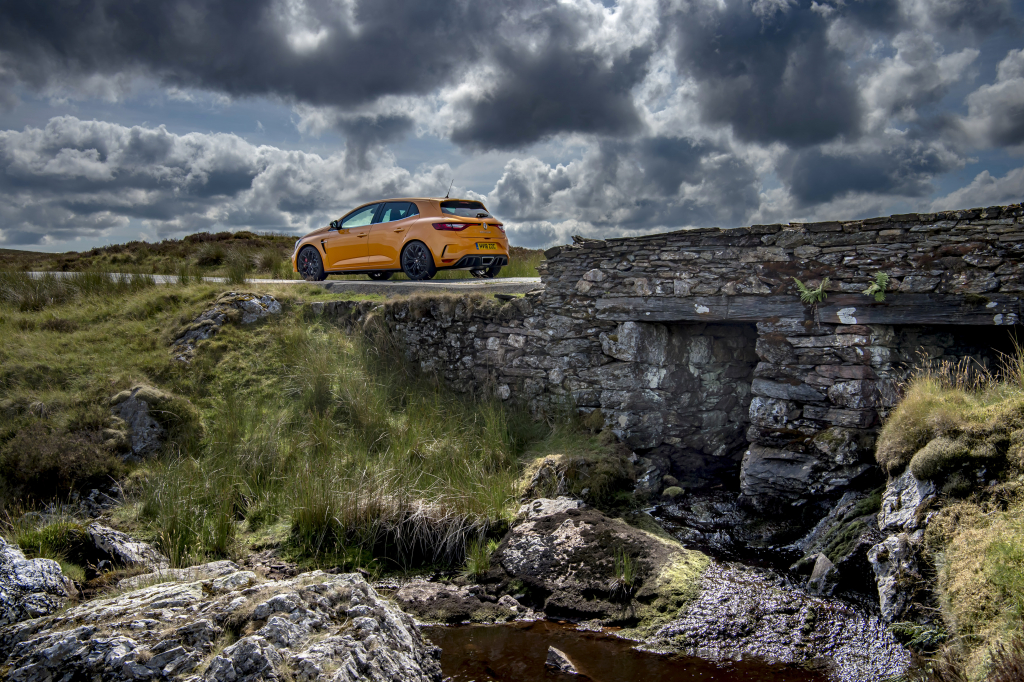 It’s a neat, squat and compact thing to behold, even if it isn’t as outright menacing as the Ford Focus RS or as subtly classy as a Golf R, but there are a few elements that let the side down.

Renault has attempted to lift this performance product above the rest of the range with grippy Alcantara sports seats and a driver-focussed steering wheel, while the seat belts receive flashes of colour and the internal LED lighting pulses red when flicked into its raciest settings. 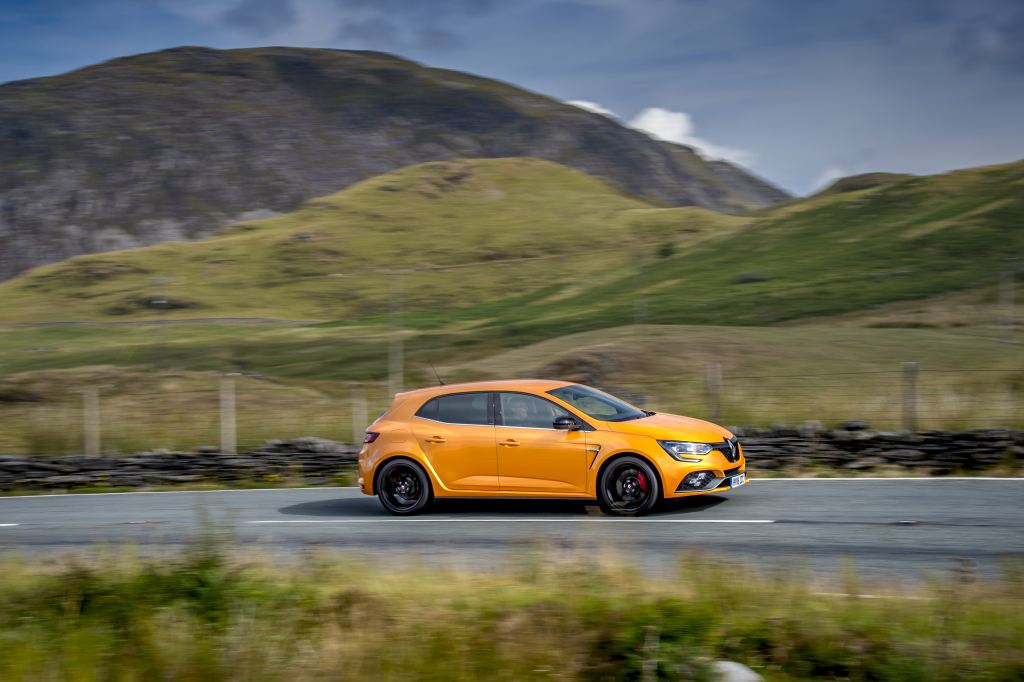 A familiar tablet-esque touchscreen sits in the middle of the dash and the buttons that surround this feel a bit flimsy and cheap, but it’s fairly quick to react and the navigation system is one of the better set-ups on the market.

This manual version receives a slick six-speed gearbox, which offers a really engaging and snappy change, while the pedals are perfectly spaced for wannabe rally drivers to hone their ‘heel-toe’ action.

That’s a good thing, because there’s no rev match or throttle-blipping system in this car. It’s up to the driver to wring every drop of performance out of it. 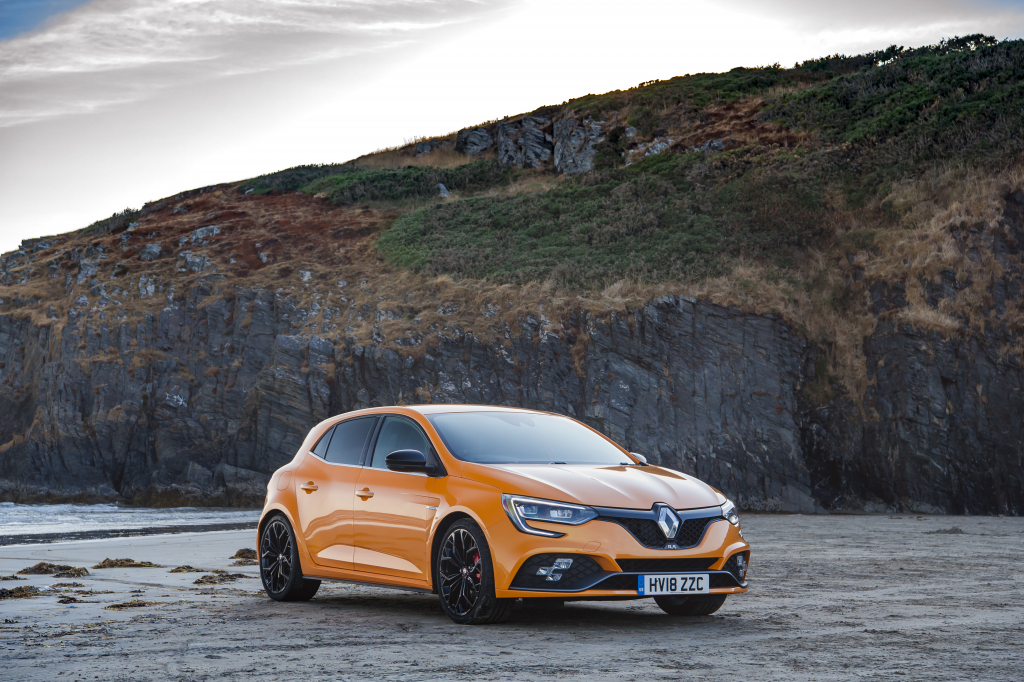 Some of the digital screens and analogue dials feel slightly at odds with each other when sat behind the wheel and the placement of cupholders, door bins and other storage elements are a bit weird. But it’s a French hot hatch, what do you expect?

This model, with its Cup Chassis and manual gearbox, is arguably the purest Megane R.S in the range and it drives beautifully.

The ride is firm and even in its most comfortable settings, it is certainly harsh enough to get on the nerves of passengers who are perhaps not impressed by the race-ready framework underpinning the vehicle. 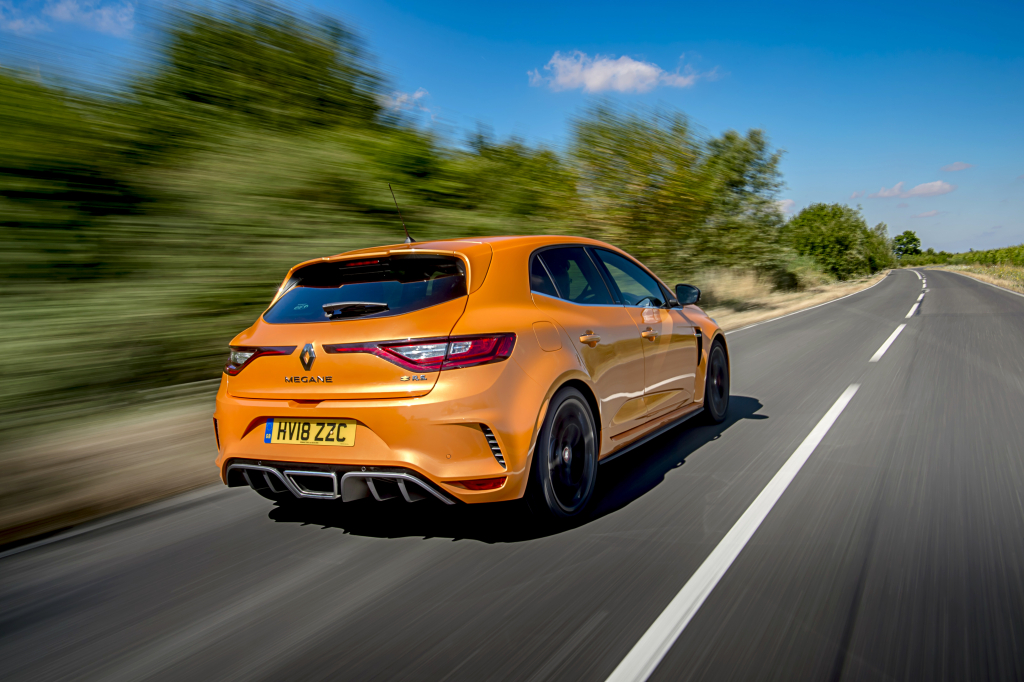 Where a Golf R feels not too far removed from the rest of the practical product range, the sporty Megane gives the impression that it is chomping at the bit to push harder, take corners faster and generally be grabbed by the scruff of the neck and driven.

Throttle response is excellent and there’s a nice guttural burble from the exhaust pipes when the right pedal is floored, but it’s the way the car handles and involves the driver that marks it out from the competition.

As previously mentioned, the manual gearbox has a perfect throw and the pedals are laid out nicely for some fancy footwork. Drop a gear, blip the throttle, wind on some lock, bury the accelerator pedal and it’s possible to get the tail edging it out in nice controlled mini slides, despite its front-wheel-drive layout. 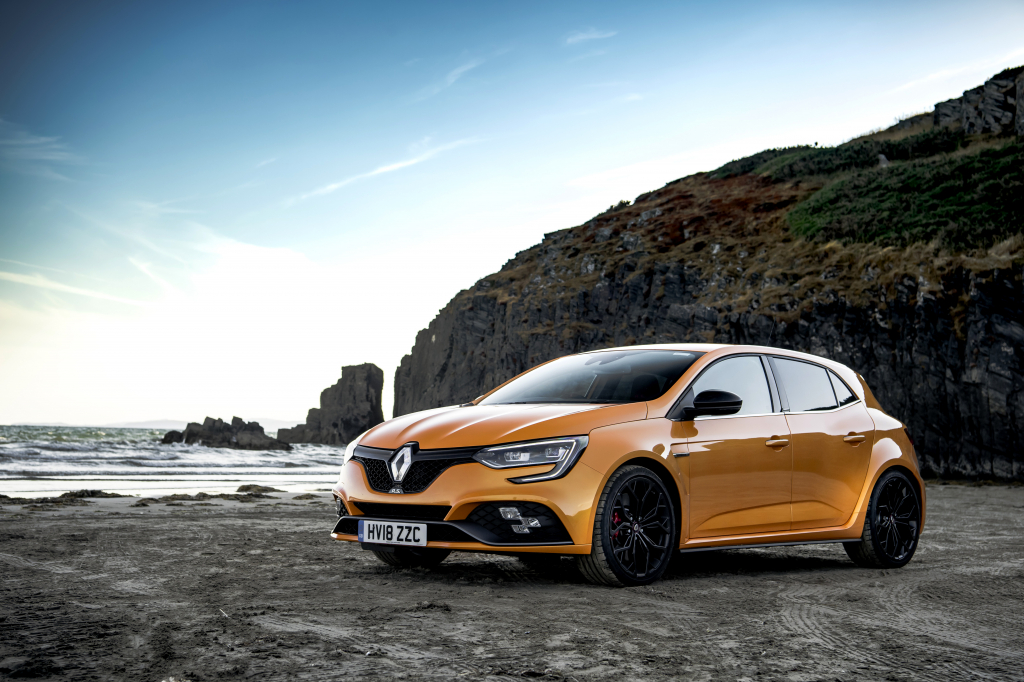 Renault has also added its clever 4Control four-wheel steering system, which works in a similar fashion to the technology Porsche brought to market in its 911 and steers the rear wheels steer in the same or an opposite direction to the front, depending on speed.

In Renault’s system, and with Race Mode activated, this technology works at up to 62mph, which means the Megane R.S darts for an apex like a rat up a drainpipe.

Steering is brilliantly sharp and offers a good amount of feedback for a modern system, while the relatively compact dimensions mean it still retains some of that highly-strung hot hatch personality. 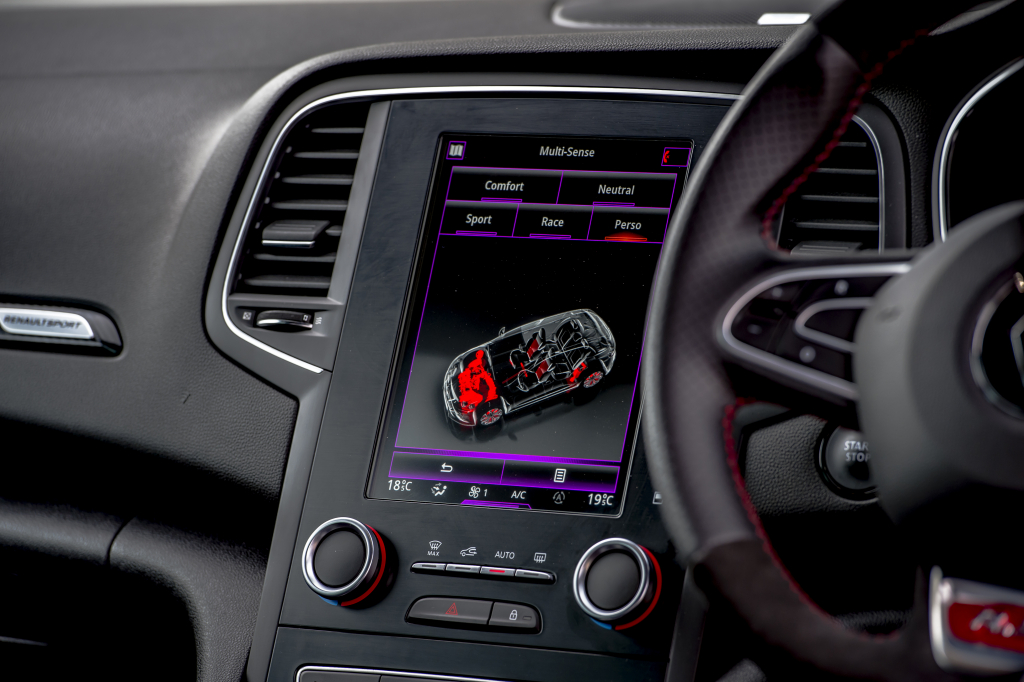 We thought the Honda Civic Type-R might have been the last in the line of the ‘analogue’ hot hatches but it seems Renault is still keen to pursue the customer that simply wants an excellent driver’s car without the myriad digital gizmos.

The Ford Focus RS might entertain with its clever ‘drift mode’ and there’s something deeply chucklesome about cornering in the massively powerful, all-wheel-drive Golf R, but neither of those feel as rewarding to drive as this. 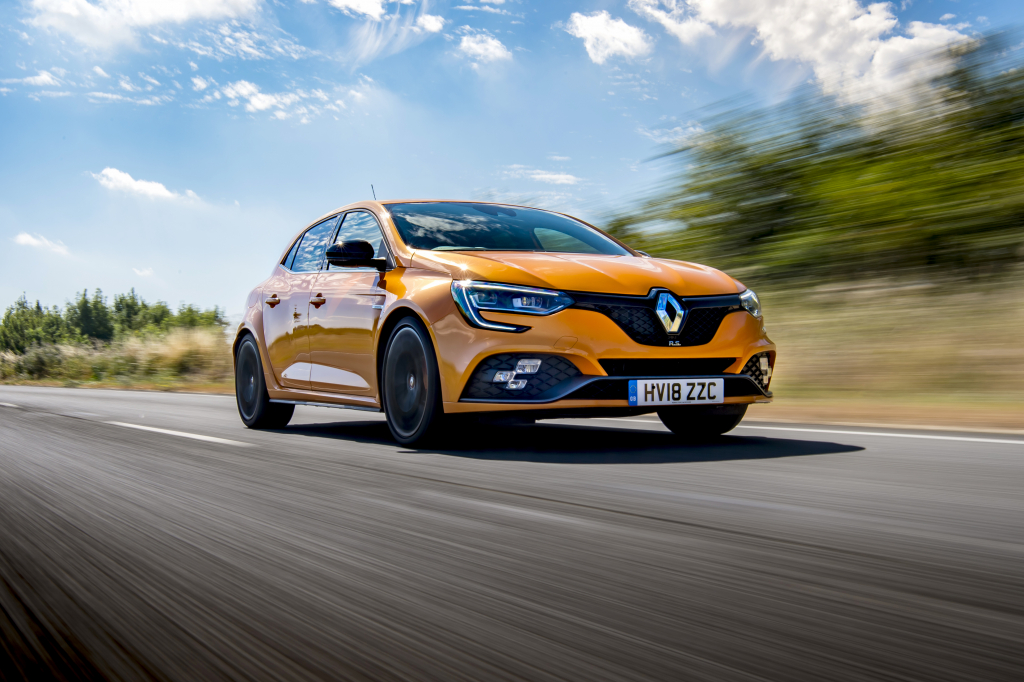 Renault’s latest Megane R.S 280 is certainly not perfect, but it should be celebrated for putting the petrolhead first. Something few manufacturers manage to pull off these days. 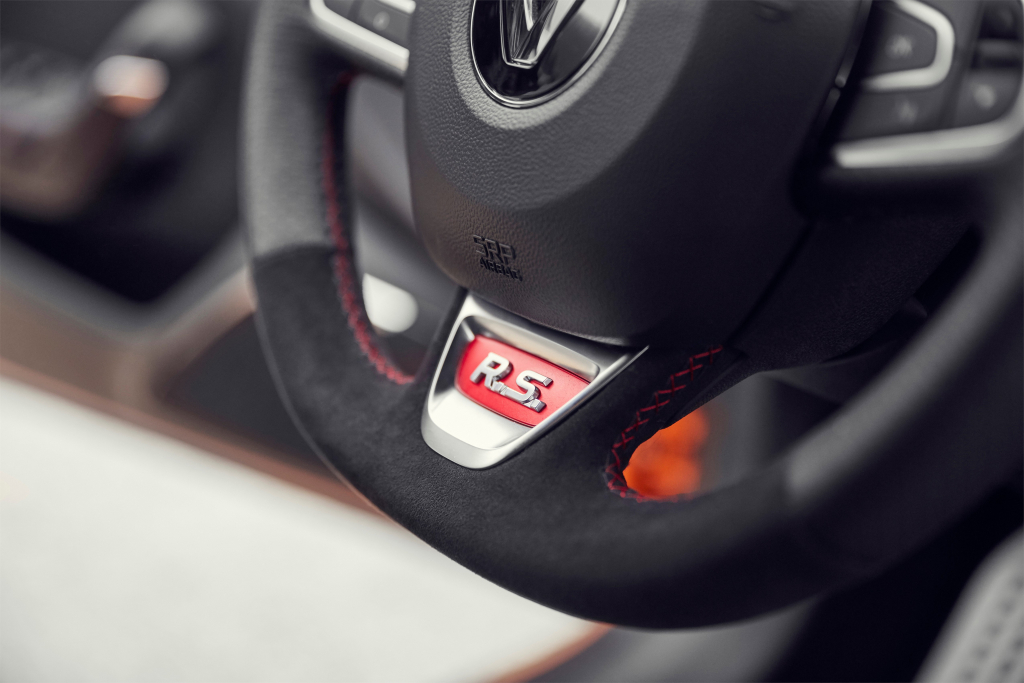