It is very difficult to pigeonhole the products offered by Can-Am’s on-road department. The Spyder, which was one of the first machines we reviewed on Flat-Out, lacks all of the practicalities of a motorcycle and boasts the visual nuances of an extra-terrestrial toilet.

Still, get it on the right road with the right group of people and it proves an absolute blast. Sure, it’s expensive, but it’s an easy and safe way for the profligate to experience the wind in their wine-ruddied faces without having to pass a bike test or risk being scraped off the floor at the first sight of an oil spill.

The Ryker should be seen as the Sypder’s smaller sibling, but rather than merely placing its big bro on a hot wash, the company has gone back to the drawing board and pretty much started from scratch. 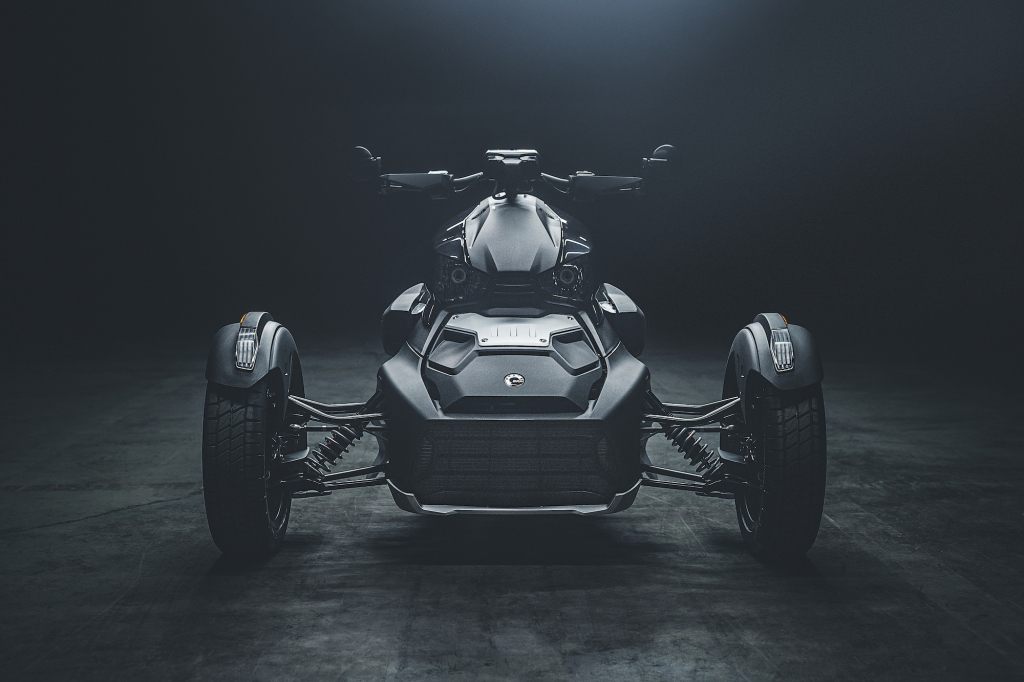 With either a 600cc or 900cc version of its famous and joyously low maintenance Rotax engine, it lacks the power of the larger Spyder but the lighter, more agile frame means Ryker can now venture to places that aren’t paved with smooth Tarmac.

If the gender-bending Spyder was difficult to quantify, this capable little dust devil is going to break minds.

Let’s get this out of the way now: the Ryker is automotive Marmite. You’ll either adore the funky, futuristic styling, the ‘reverse trike’ wheel layout and quad bike seating position, or you will look upon it with a quizzical frown. It certainly is different. 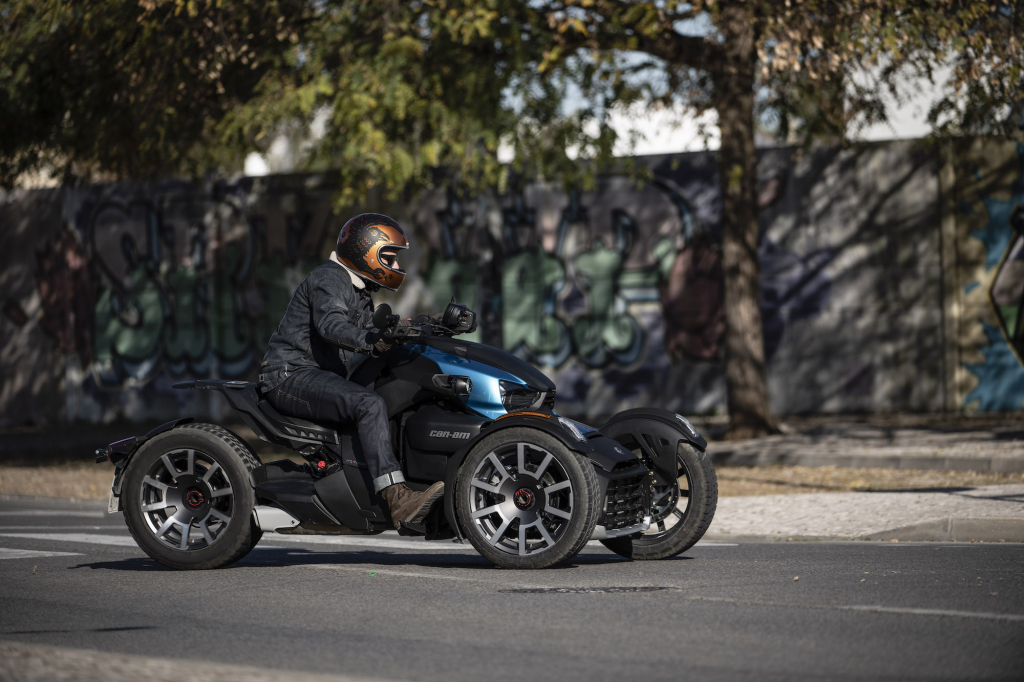 We must admit, the slimmer frame of this new model, the lower riding position and optional flat bars are more visually appealing to these eyes, while Can-Am claims there are more than 75,000 different customisation combinations on offer, with buyers able to choose between numerous side panels, alloy wheel accents, grips, luggage sets and seat options to get it exactly the way they want it.

“The width of the thing rules out traffic-busting filtering”

The launch event boasted models with myriad paint options, luggage combos and optional extras, but the most striking were those machines decked out in a mean black hue, with black alloys wheels and minimal custom parts. Call us a bunch of basic bitches, but that’s the way we like it.

As is Can-Am tradition, the Ryker features a simple “twist-and-go” throttle system, which means there’s no need to trouble yourself with clutch levers and biting points. 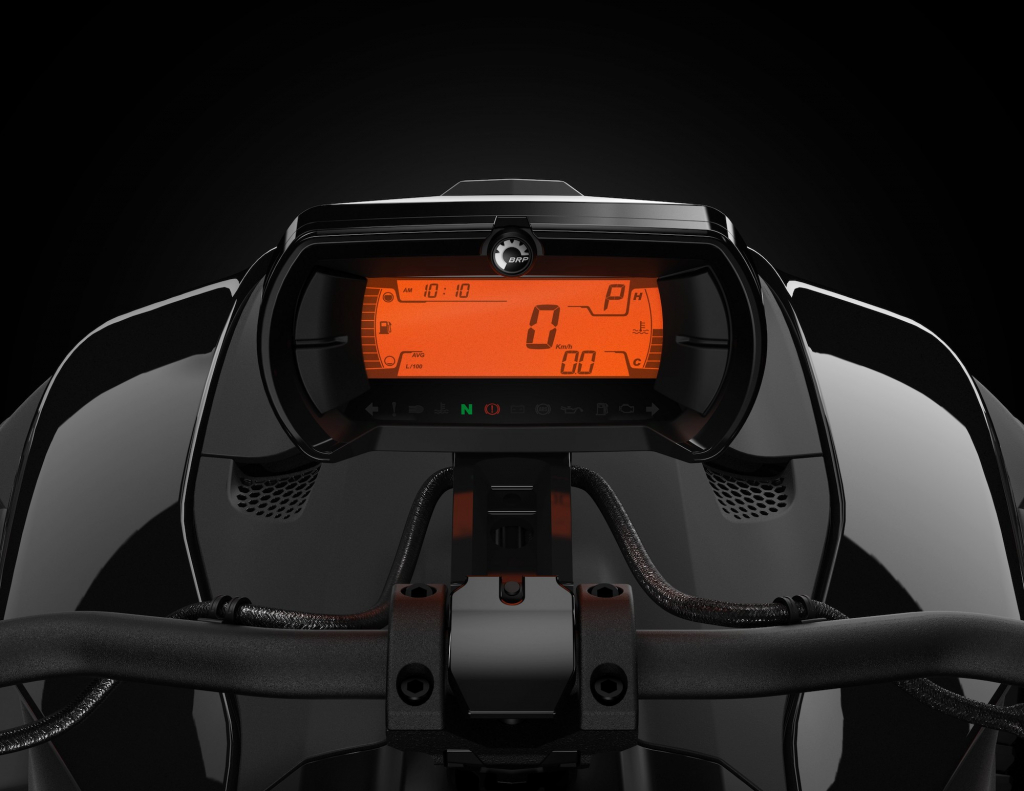 In fact, the handlebars are alarmingly free of any kind of lever, with braking duties taken care of by a single foot pedal that operates the complex ABS-enabled disc brakes mounted to all three car-like alloy wheels.

The start-up process is an unnecessarily complex one, with a traditional key replaced by a little plastic blob that clips onto an even smaller nubbin on the left flank of the unit (Can-Am doesn’t like to use the word ‘bike’).

We predict it will be a matter of minutes before this little key thing is lost, but once in place, the rider must then ensure the kill switch isn’t engaged, twist the throttle towards the horizon (weird), punch the stubby ignition button and then release the parking brake. Bloody hell. 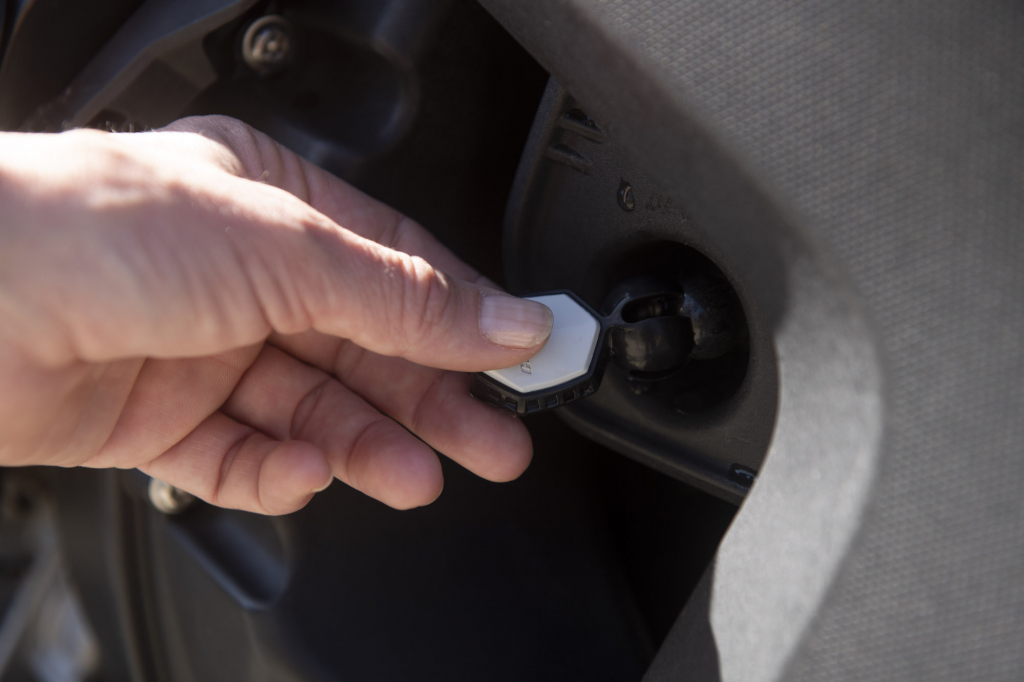 Thankfully, the riding experience is far less contrived and it’s simply a case of twisting the throttle to go and stamping on that big brake lever to bring things to a halt. There’s also a reverse gear, which is activated via an awkwardly placed foot lever, to get out of tricky parking spots.

Where the larger Spyder used a more conventional automatic gearbox, Ryker makes do with a Continuously Variable Transmission (CVT), but we’ll get on to that a little bit later.

All models feature a 4.5-inch digital display that takes care of the speedometer, tachometer, odometer, fuel gauge and much more, while there’s 7.5-litres of stowage space and two USB slots for charging gadgets on the go. 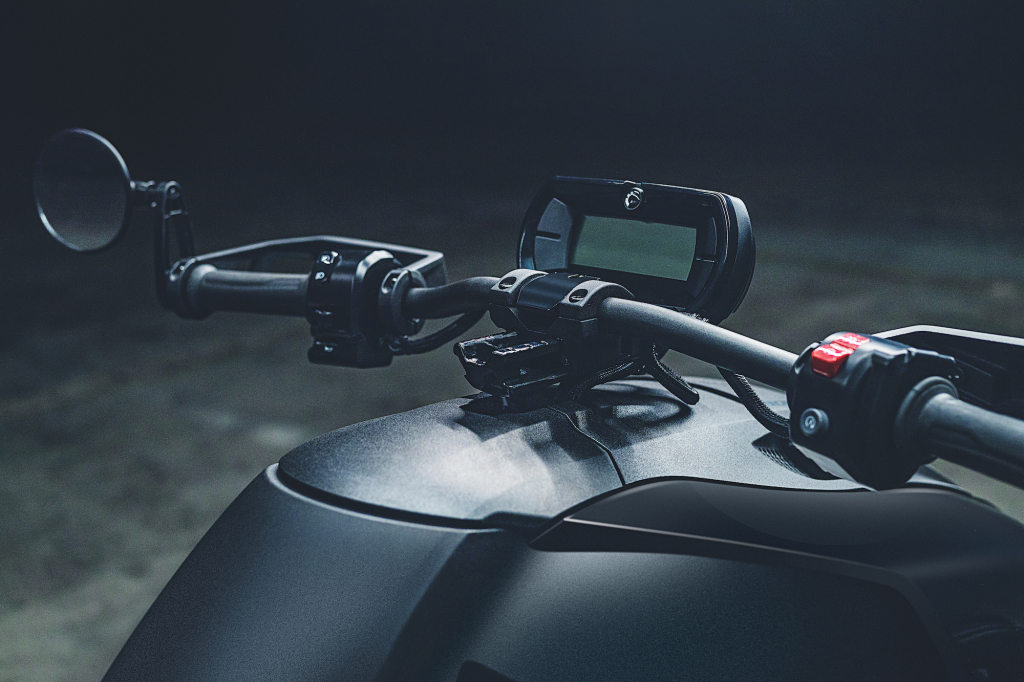 Anyone who has spent some time on a quad bike or ski-doo will feel right at home with Ryker, but the steering will feel alien to most other riders at first. Combining the worlds of quad-biking and two-wheeled pursuits, it requires plenty of input from the legs in order to get the hulking machine turning tightly.

The trick traction control and ABS systems will soon iron out the inevitable understeer, but it’s much harder to find the riding loopholes that allow for the powered wheel at the rear to step out of line.

Linking up switchbacks and the really entertaining corners would be much easier if the traction control could be deactivated, but then we imagine the Ryker would become an absolute handful and go against the approachable character Can-Am has set out to create. 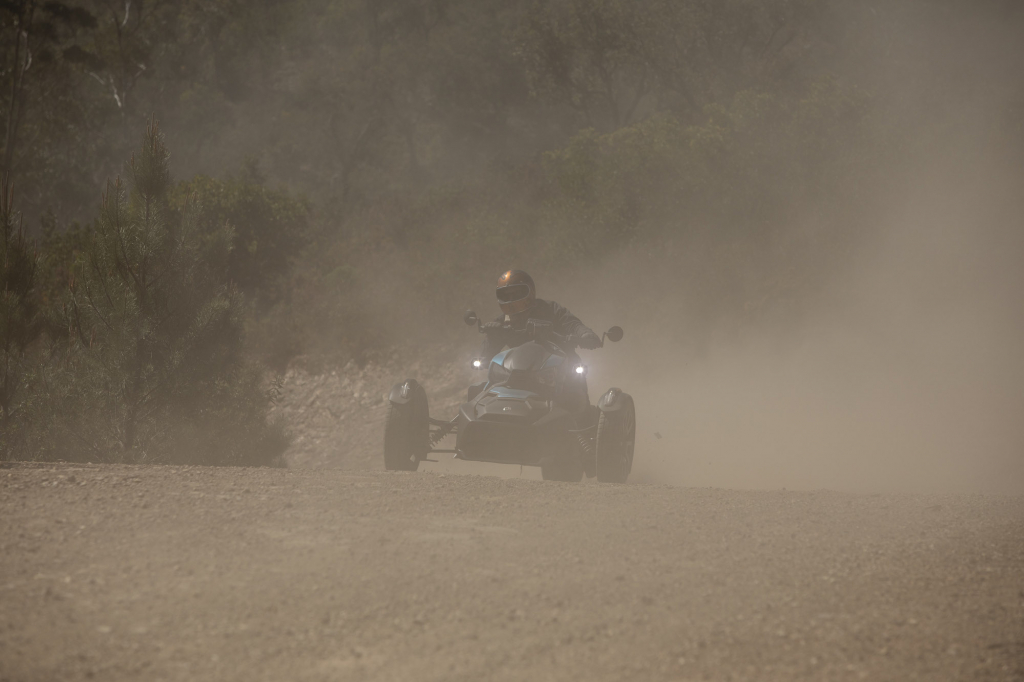 Opt for the larger 900cc engine (we highly recommend) and performance is strong, with plenty of pull throughout the rev range to make rapid overtaking manoeuvres possible.

The addition of a CVT gearbox is slightly annoying, as the soundtrack is nothing more than an irritating drone as the transmission hunts out the correct ratio. There’s certainly little point in fitting a beefier exhaust pipe, unless you want your Ryker to sound like a scooter on steroids.

It is perfectly comfortable enough on longer motorway journeys, but some might find the steering a little twitchy compared to a traditional motorcycle. However, the width of the thing rules out traffic-busting filtering, meaning it’s basically just a small car that’s open the elements when the roads clog. 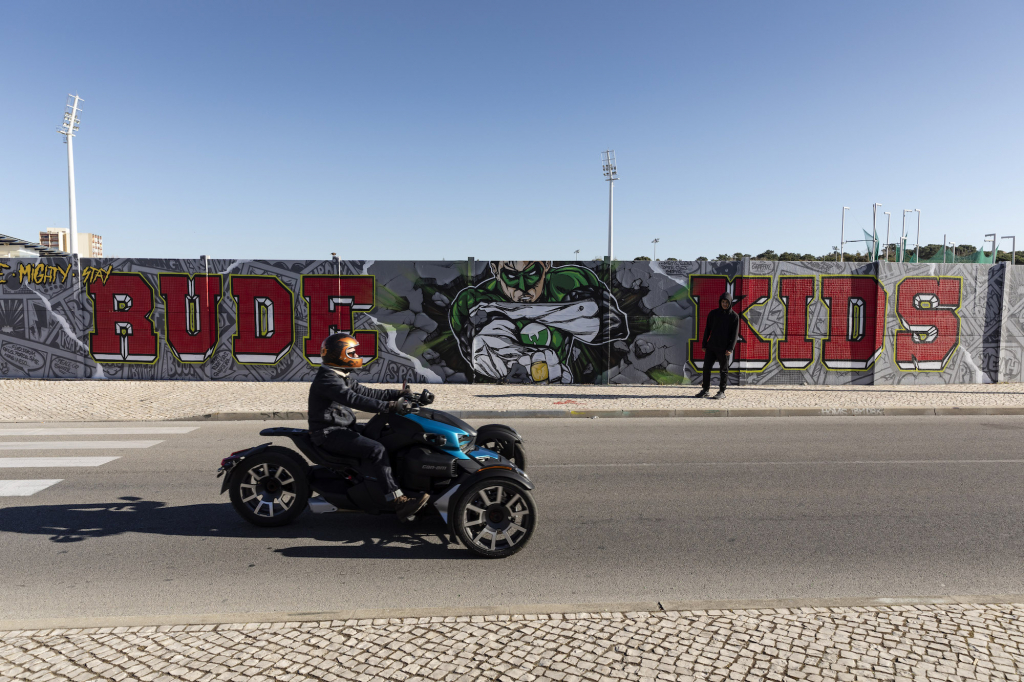 Thankfully, Ryker has a final trick up its sleeve that almost makes up for its many foibles and that’s its ability to venture off the beaten path.

The small display allows riders to cycle through the various traction control modes, with a special ‘Rally’ function allowing for maximum fun and skids on loose surfaces. Ryker might not be able to compete with a quad in terms of tackling really rough terrain, but it’s a riot on a gravel track. The traction control gifts just enough slide (around 30-degrees slip angle) to raise a smile, without it ever feeling dangerous.

“Can-Am claims there are more than 75,000 different customisation combinations on offer” 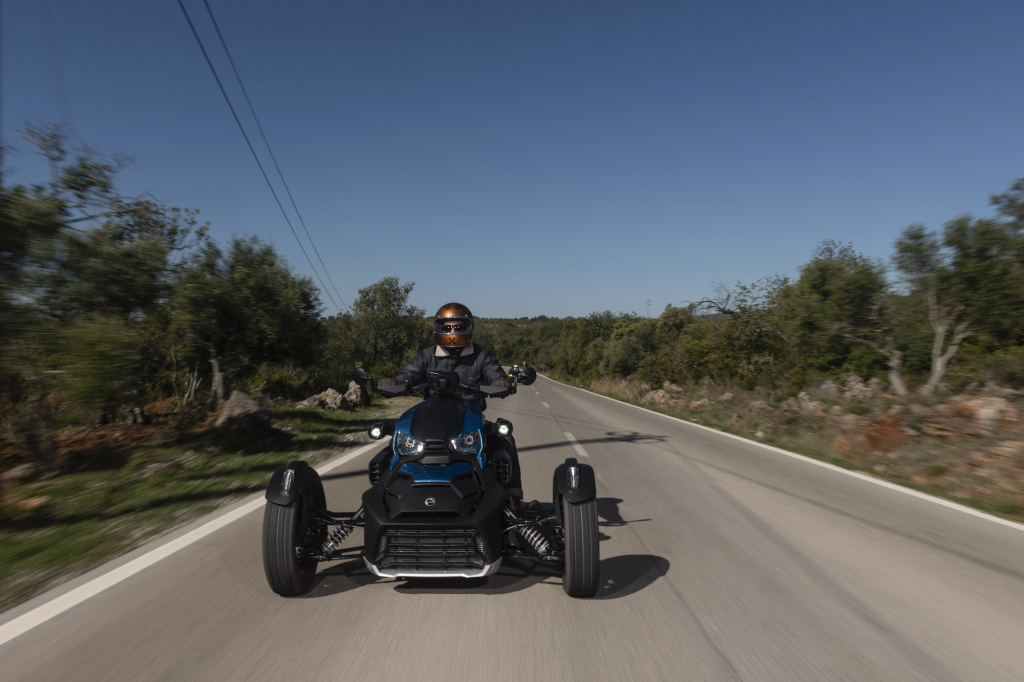 The Ryker is better looking and more entertaining than its Spyder sibling, but it is still a difficult beast to quantify. If you can’t be bothered to take a bike test or like the added peace of mind that three wheels and advanced safety systems offer, this could be right up your street.

The added off-road element makes it a slightly more justifiable choice for those looking to invest in a neat weekend toy, but for most, it will remain a curiosity owned by those that crave the attention and have the cash to burn. 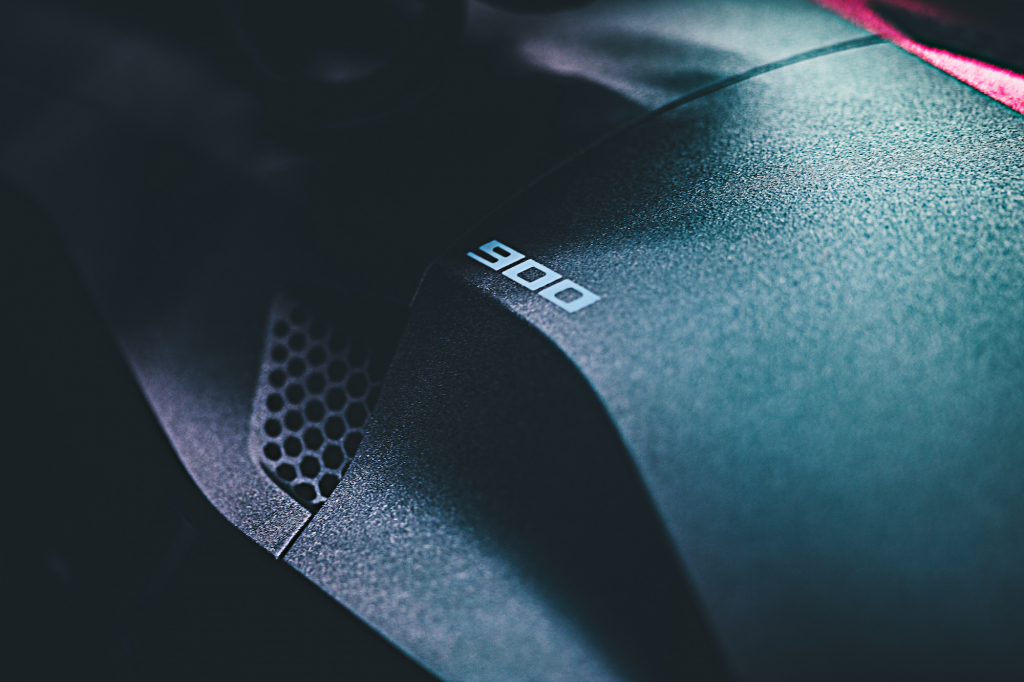