There is a reason why, as a nation, we are collectively a little bit obsessed with the hot hatch.

Ever since Volkswagen, Peugeot, and Renault started releasing practical yet potent everyday run-arounds in the early 1980s, we have been lapping up the faster, more powerful and more practical iterations ever since.

As a result, the humble hot hatch has slowly morphed from a lightweight, 115bhp giggle wagon (see Peugeot 205 GTI) to the technically advanced, all-wheel-drive, sports car-baiting monsters we see now. 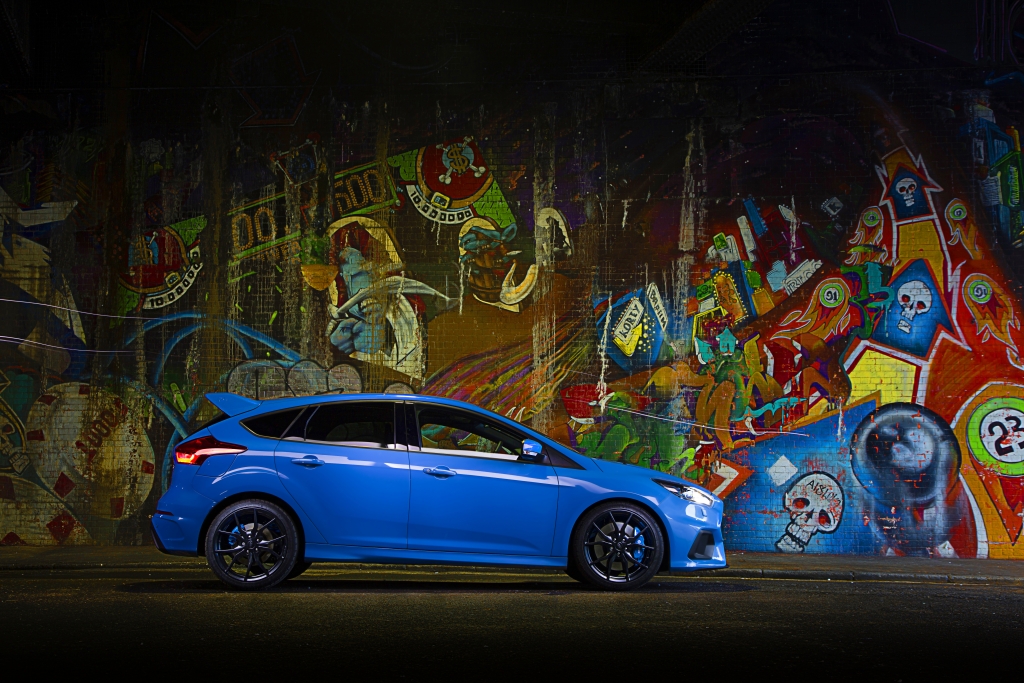 The Mercedes-AMG A45, the Honda Civic Type-R and the Golf R are just a few revered names in the hyper hatch game and Ford’s latest Focus RS is arguably one of the most pertinent.

Why? Because its highly-strung, twin-scroll turbocharged 2.3-litre EcoBoost engine delivers a heady 350hp at 6,000rpm and 440Nm of torque, which is sees it sprint from 0-62mph in 4.7 seconds.

Granted, it weighs almost twice as much as its retro forebears but it is laden with technological advances that see it transform from everyday workhorse into a complete track-day monster. 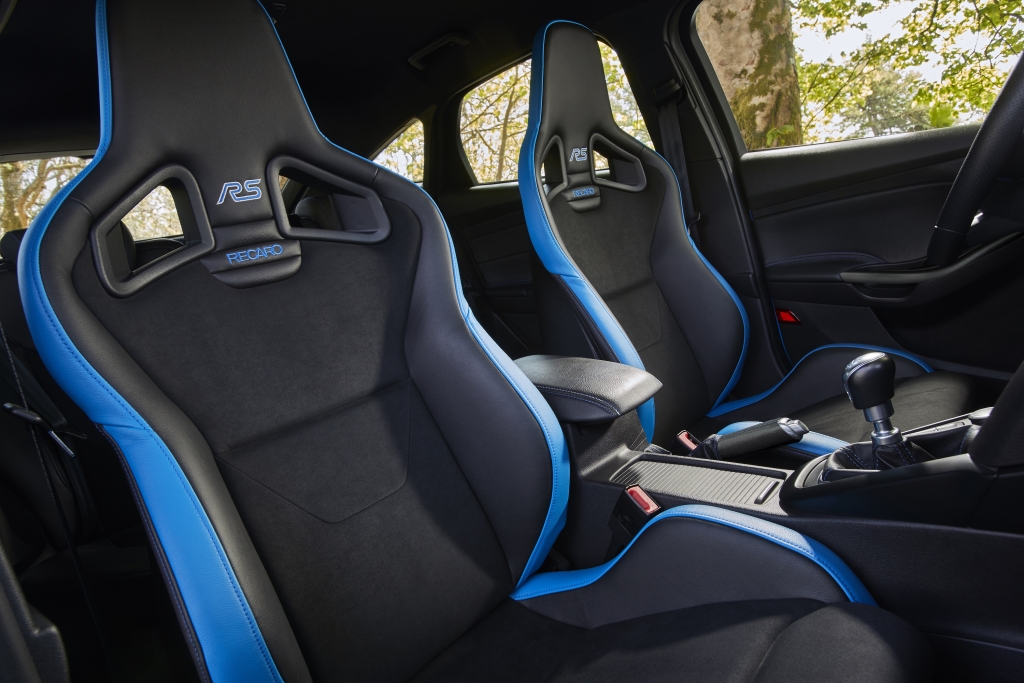 The car that arrives for our test is kitted out in eye-popping Nitrous Blue, complete with Recaro race seats and visible Brembo four-piston monoblock callipers peeking out between the enormous 19-inch RS alloy wheels.

A shy and retiring hatch it is not.

Clamber into the Focus RS and it immediately feels like a serious proposition. A bank of dials and boost gauges sit stop the dash, a flat-bottomed steering wheel greets the driver and those Recaro seats grip the posterior like a panicked sloth.

But those pews lack adjustability and the result is a seating position that feels like you’re standing on the pedals, rather than sitting low enough to get that true track-day experience.

However, Ford’s new Sync3 system (complete with eight-inch touch screen) is really simple to use, connects to smartphones with ease and offers lots of online features. 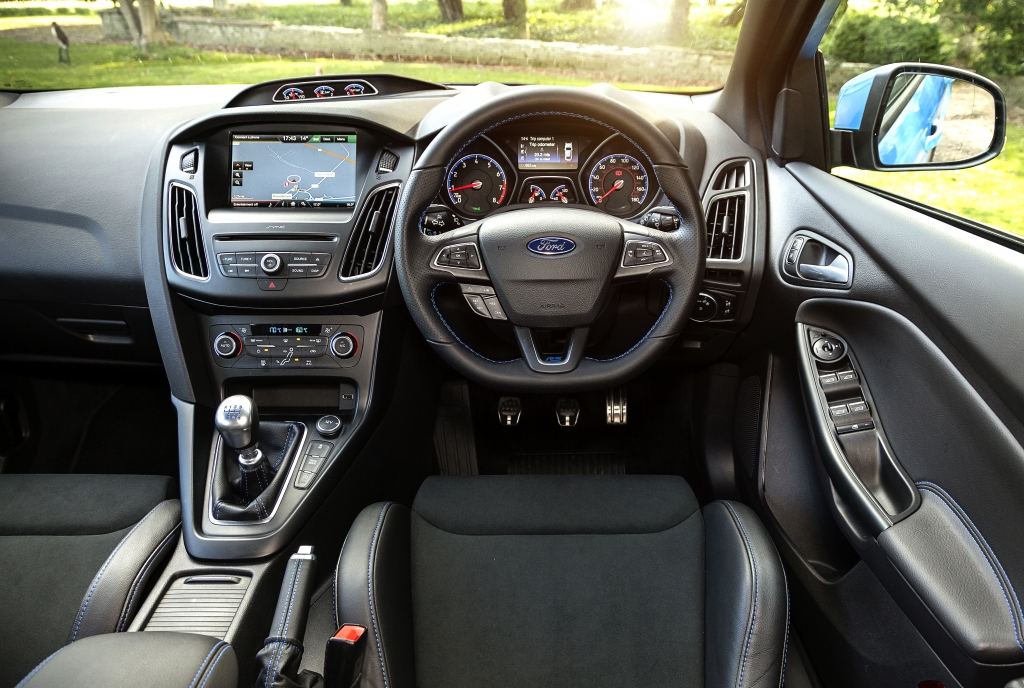 There’s also a punchy Sony sound system (complete with Halfords-spec subwoofer in the boot), while the optional £465 navigation software is quick and responsive, if a little fiddly to use at times.

Arguably the most important button resides in the centre console and this adjusts the driving mode, something that owners will likely find themselves doing on a regular basis.

“The ride can be noisy at times; with those big twin exhausts doing their best to drown out the Sony stereo”

The car I am sedately piloting to work has five doors, ISOFIX anchors in the rear and a boot large enough to swallow prams, shopping and other dull daily accoutrements.

Yes, the ride is rather firm and traversing the odd sleeping policeman can be a pain, while the steering feels heavy when compared to the standard Focus, but this is a car that you can easily use everyday.

I dropped little people at nursery, picked up flat pack furniture, took trips to the tip and tackled monstrously boring trips around the M25 in the space of a week and never once complained about a lack of space or comfort. 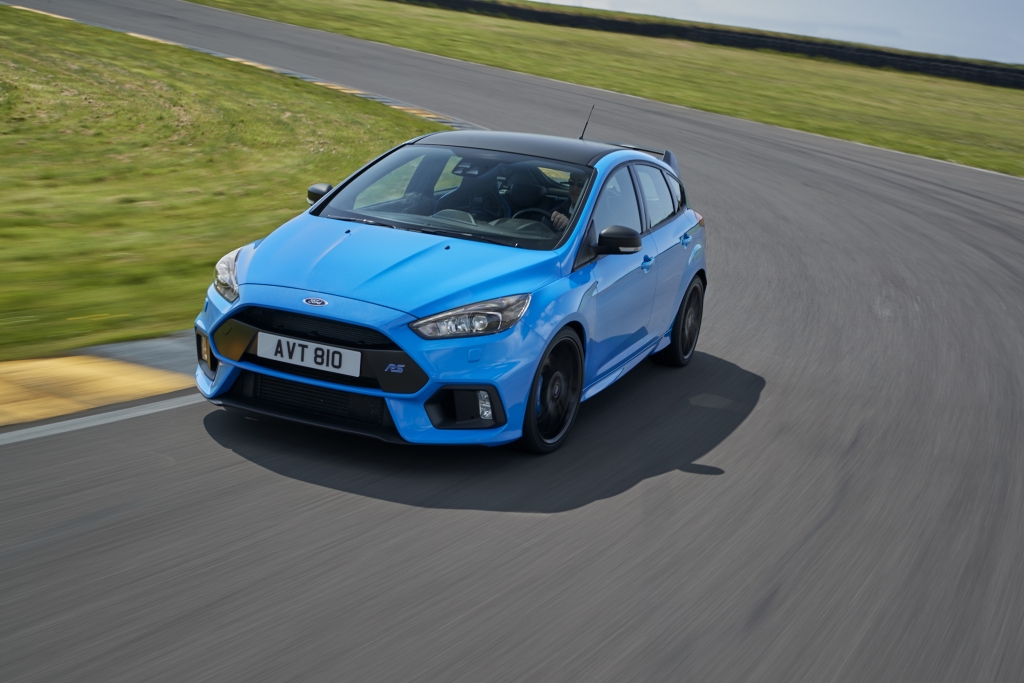 The ride can be noisy at times; with those big twin exhausts doing their best to drown out the Sony stereo at motorway cruising speeds, while the overall refinement doesn’t feel as impressive as Volkswagen’s efforts with the Golf R.

But flick the drive mode into ‘Sport’ or ‘Track’ and the RS takes on a very different personality. This is a ferociously powerful car when it wants to be.

“The crackles and pops emitted from big tailpipes are hilariously addictive”

The Mercedes AMG A 45 might hold the current title of most shouty hot hatch but the way that the Focus RS gathers pace is simply mind-blowing.

Slot the beautifully tactile manual six-speed gearbox into first, bury the throttle, dump the clutch and a plethora of mechanical and electrical trickery comes into play to propel the Nitrous Blue weapon towards the horizon.

The thrum of the four-cylinder engine is entertaining, if not completely wild, but the crackles and pops emitted from big tailpipes are hilariously addictive. 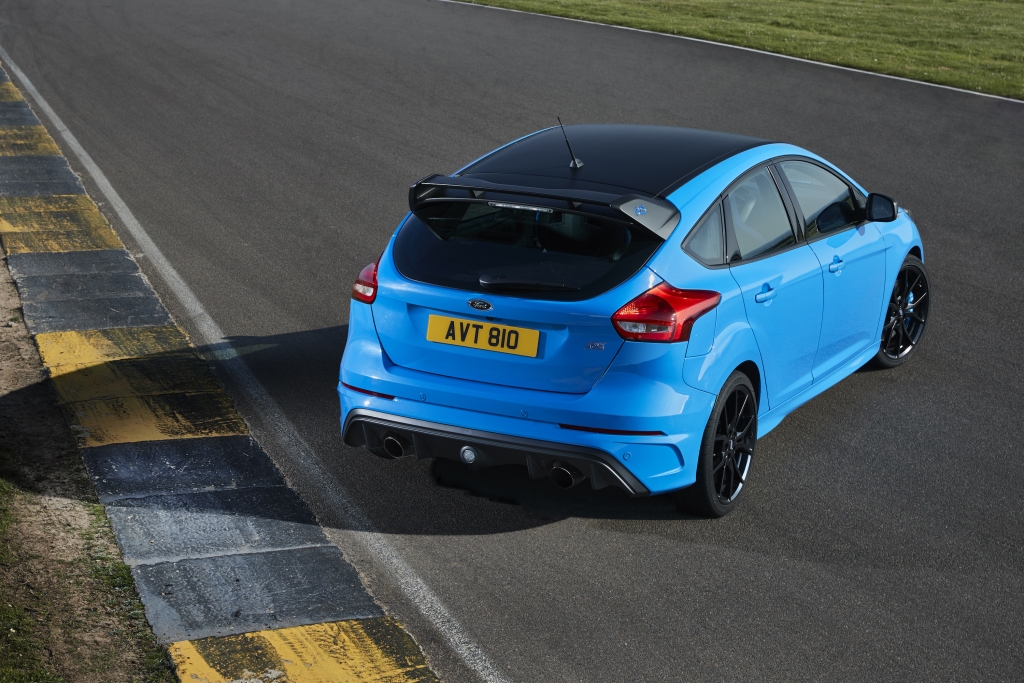 I found myself deliberately shifting up a gear with needless aggression in order to get the thing popping and banging on the morning commute. Hilarious.

And then there is the handling, which is arguably one of the most impressive things about this car.

There is just so much going on under the skin that it’s difficult to compress it all into one short review but the trick all-wheel-drive system ensures the Focus RS is a car of many faces. 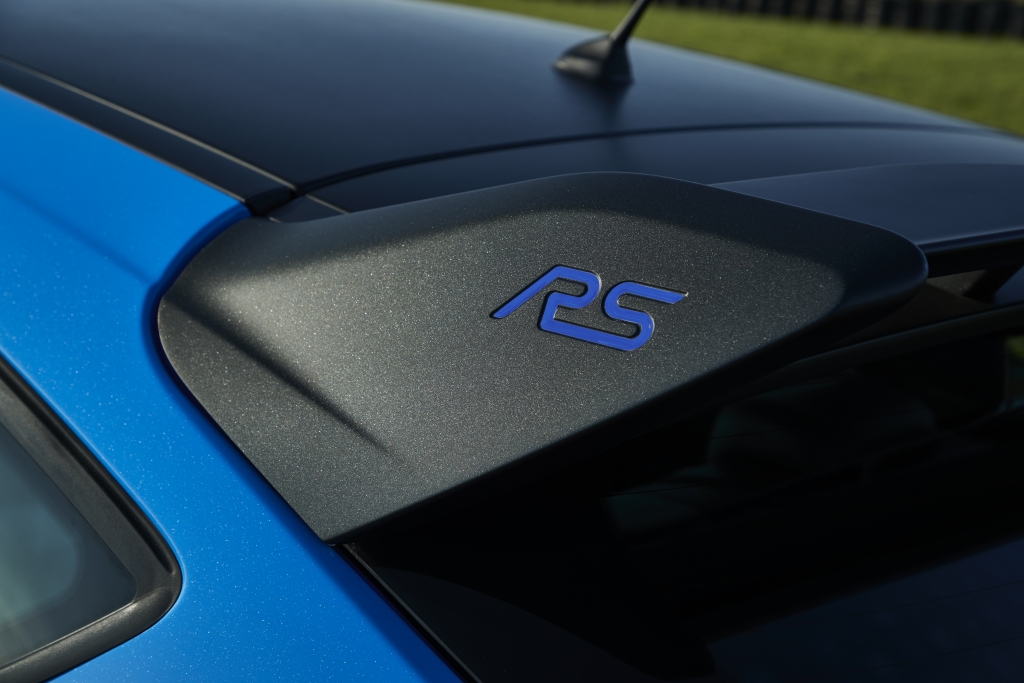 Drive it efficiently and it tucks into and exits bends with unrivalled precision, but dick around with the brakes and throttle mid-corner and it will happily stick the tail out in a show of stupendous drifty-ness.

Switch the drive mode into ‘Drift’ and the technical wizardry goes into overdrive, with the clever ESP and traction control technology first detecting a slide and then catching it.

All the driver has to do is keep the steering wheel locked and feather the throttle to keep the car sliding at angles that Ken Block would be proud of.

“There’s always a sense of lunacy lurking beneath the surface”

Where rival manufacturers have managed to create blisteringly quick cars that remain practical, comfortable and stylish, Ford has ignored much of this and opted to birth a bona fide nutter.

Yes, it will happily deliver a fairly calm and spacious daily drive, but there’s always a sense of lunacy lurking beneath the surface. 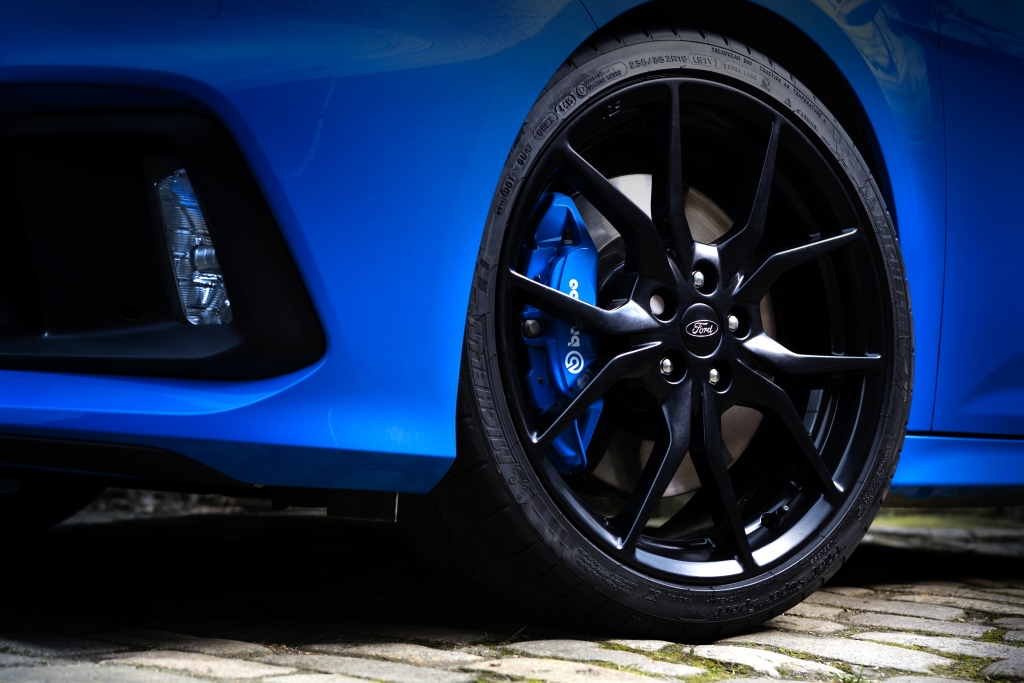 In that sense, Ford will point you in the direction of a Focus ST if you simply want to inject a few extra horses into the family wagon, leaving the RS to those who want something really special.

Is it perfect? Absolutely not. But it raises a smile that very few cars manage these days and for that Ford, we salute you.