Think of an American car, the first one that pops into your head. It was a Ford Mustang, wasn’t it? Forget the Chevrolet Corvette, ever since the original Mustang launched back in 1964, Motor City’s most famous muscle car has been the American automobile.

Okay, so compared to 50 years ago, the good ol’ US of A is no longer the ultra-cool kid it once was. Something to do with a large orange ball of hot gas (and no, we’re not talking about the recent solar eclipse).

“Podgy and overly soft, they usually lumbered through corners like an elephant on roller skates”

Despite this, some of the country’s most famous exports remain as popular as ever, including the allure of a proper V8-powered Ford Mustang.

The problem is (or should we say, was) that for us limeys on the eastern side of The Pond, if we wanted our Ford Mustang fix, we had to put up with a left hooker with suspension tuned for the wide, flat and rather straight highways that criss-cross the land of the brave. 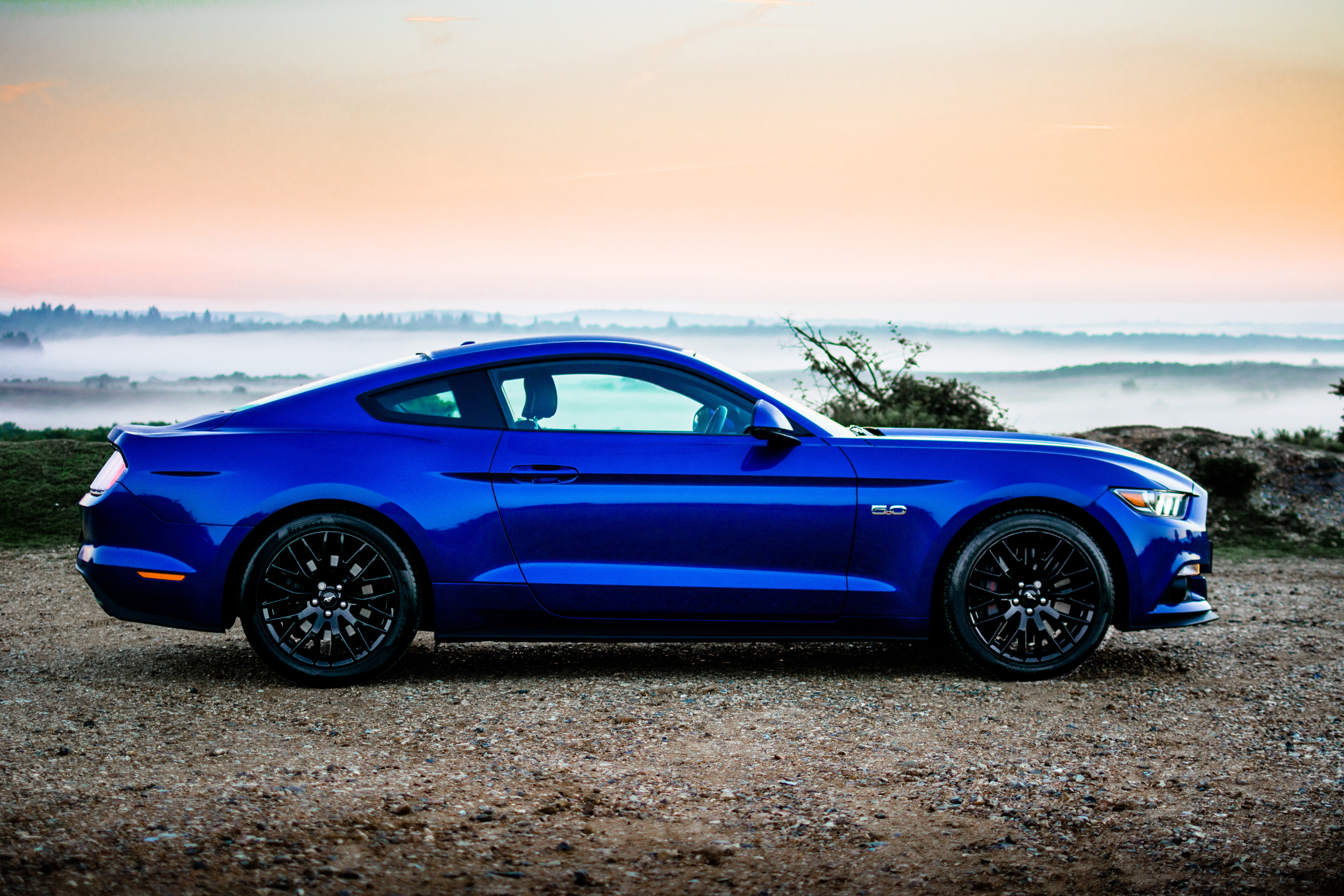 In other words, but for the novelty of a thunderous V8 up front, imported Ford Mustangs were actually pretty disappointing affairs. Podgy and overly soft, they usually lumbered through corners like an elephant on roller skates.

With the continued overseas desire for this Americana icon though, Ford has finally decided to provide a European spec version of its X-generation Mustang GT (complete with right-hand drive for us weirdo Brits).

Has this finally allowed the muscle car to break into the British market? 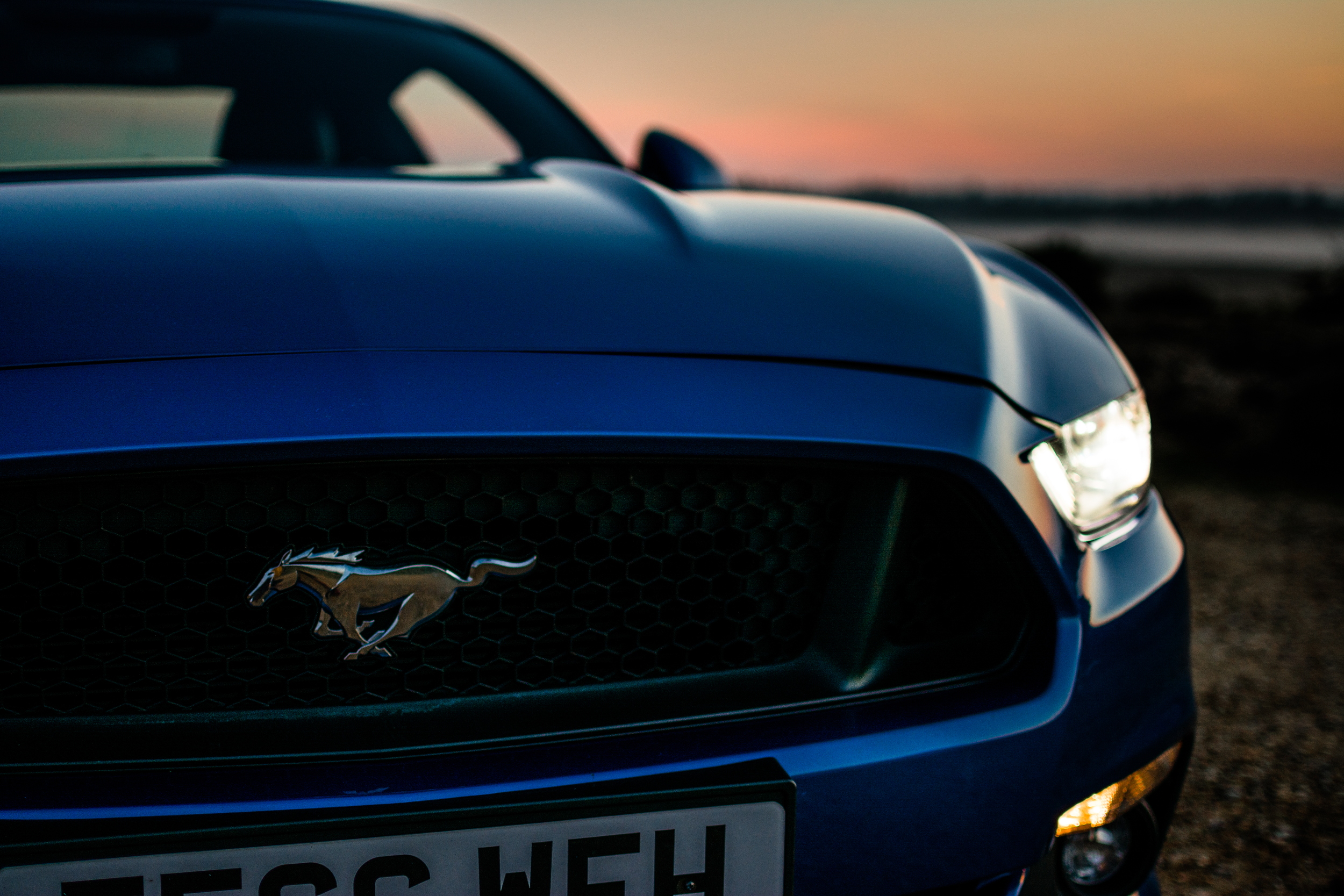 First off, the latest Mustang truly is a stunner to look at. Walk all the way around it and we dare you to find an angle that it doesn’t look good from.

There’s no getting away from the fact it’s a big car (from tip to tail it’s a shade under/over X metres long) and, when you delve a little deeper into the styling, there are quite a few swage lines to trick the eye.

They do a great job though. The latest Ford Mustang doesn’t feel as big as it looks and, despite the myriad of sharp lines along its flanks, it doesn’t seem as fussy as many modern designs. 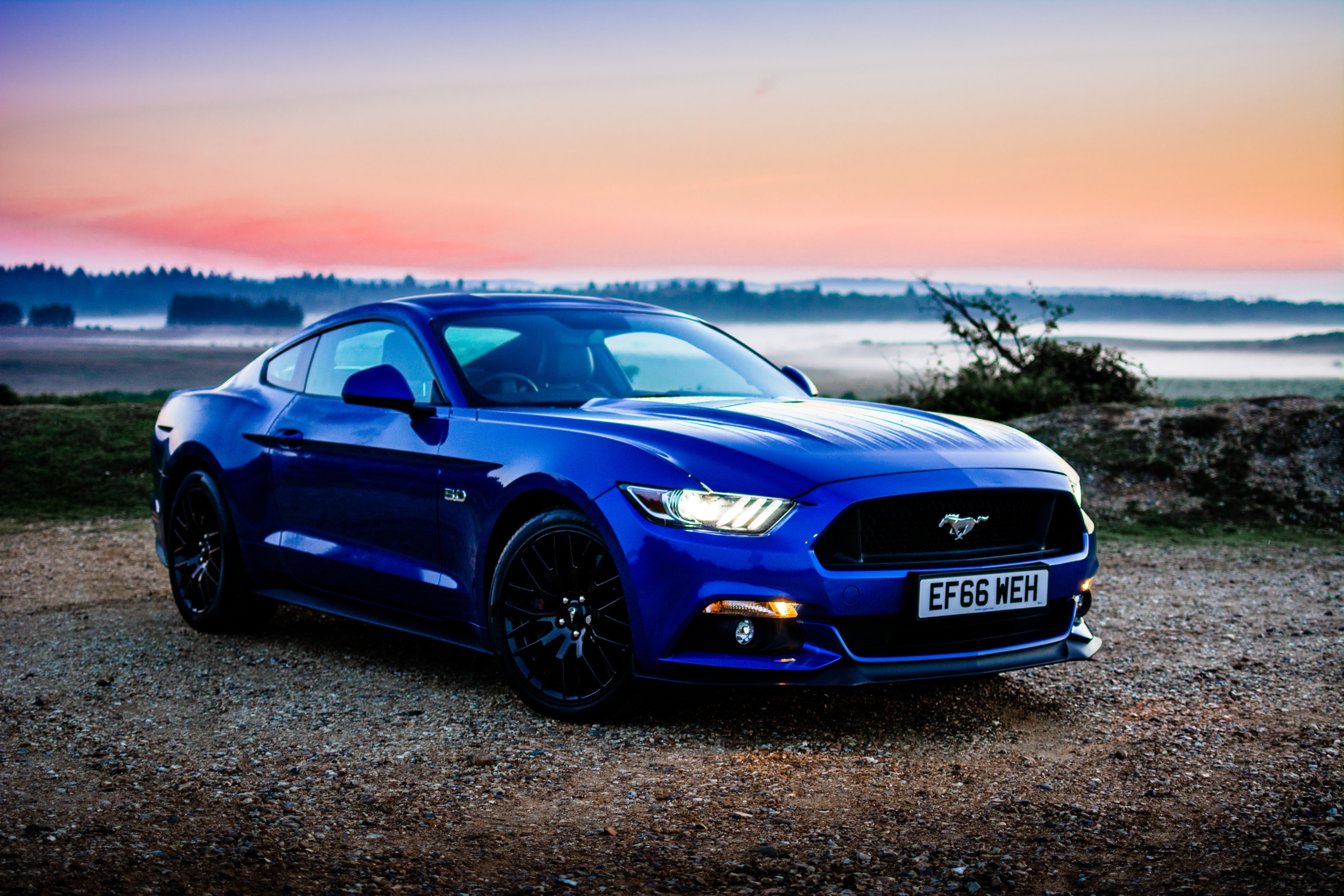 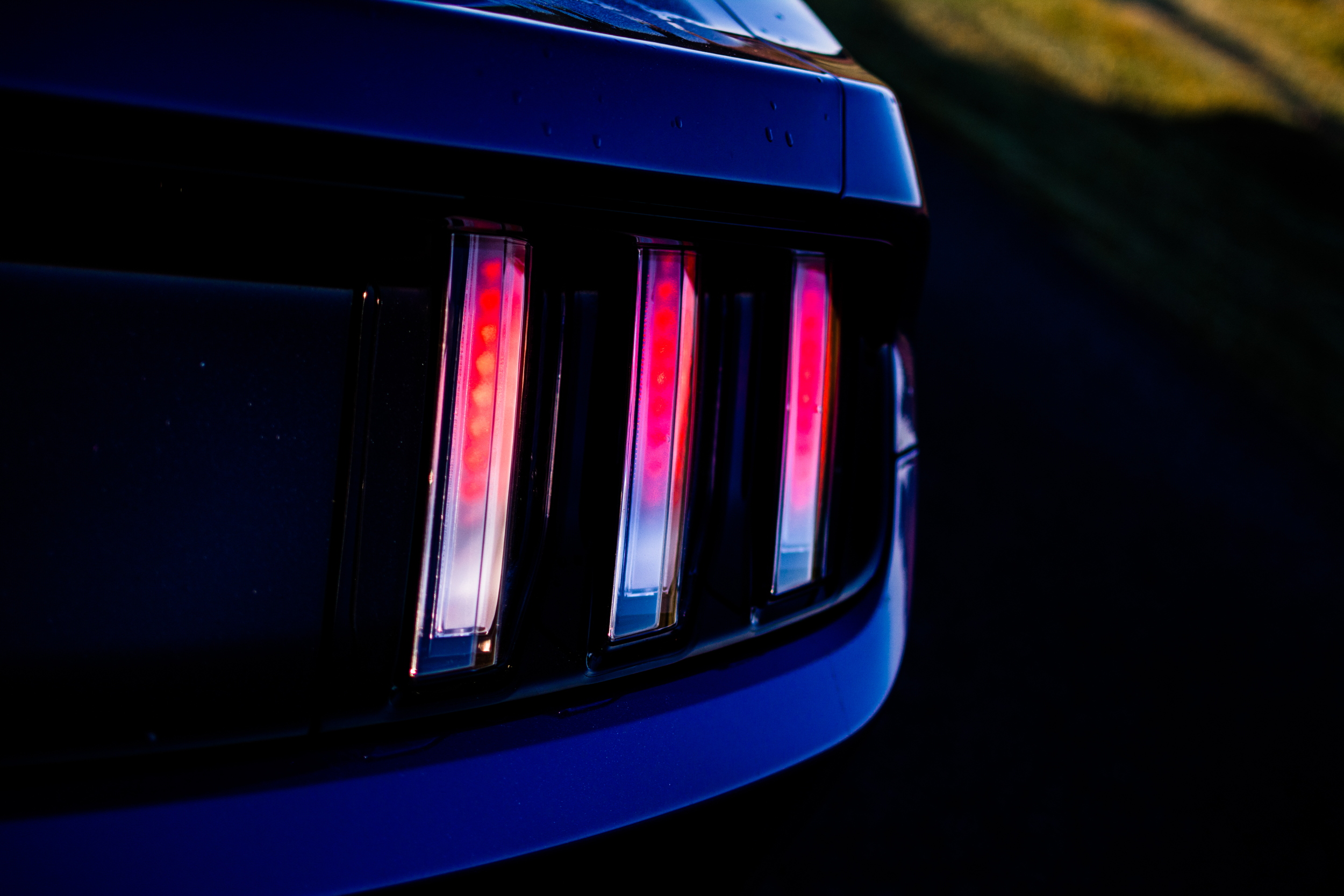 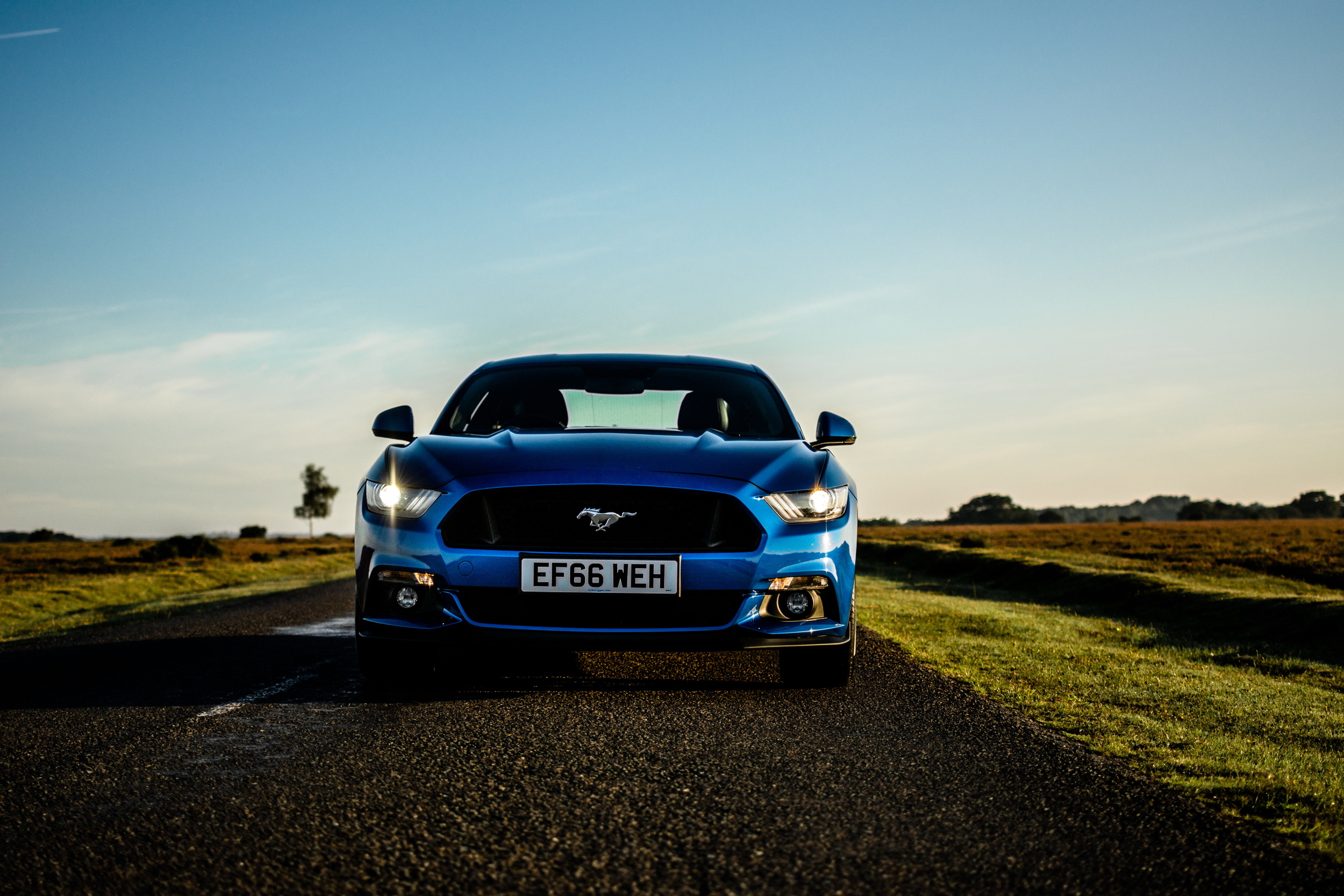 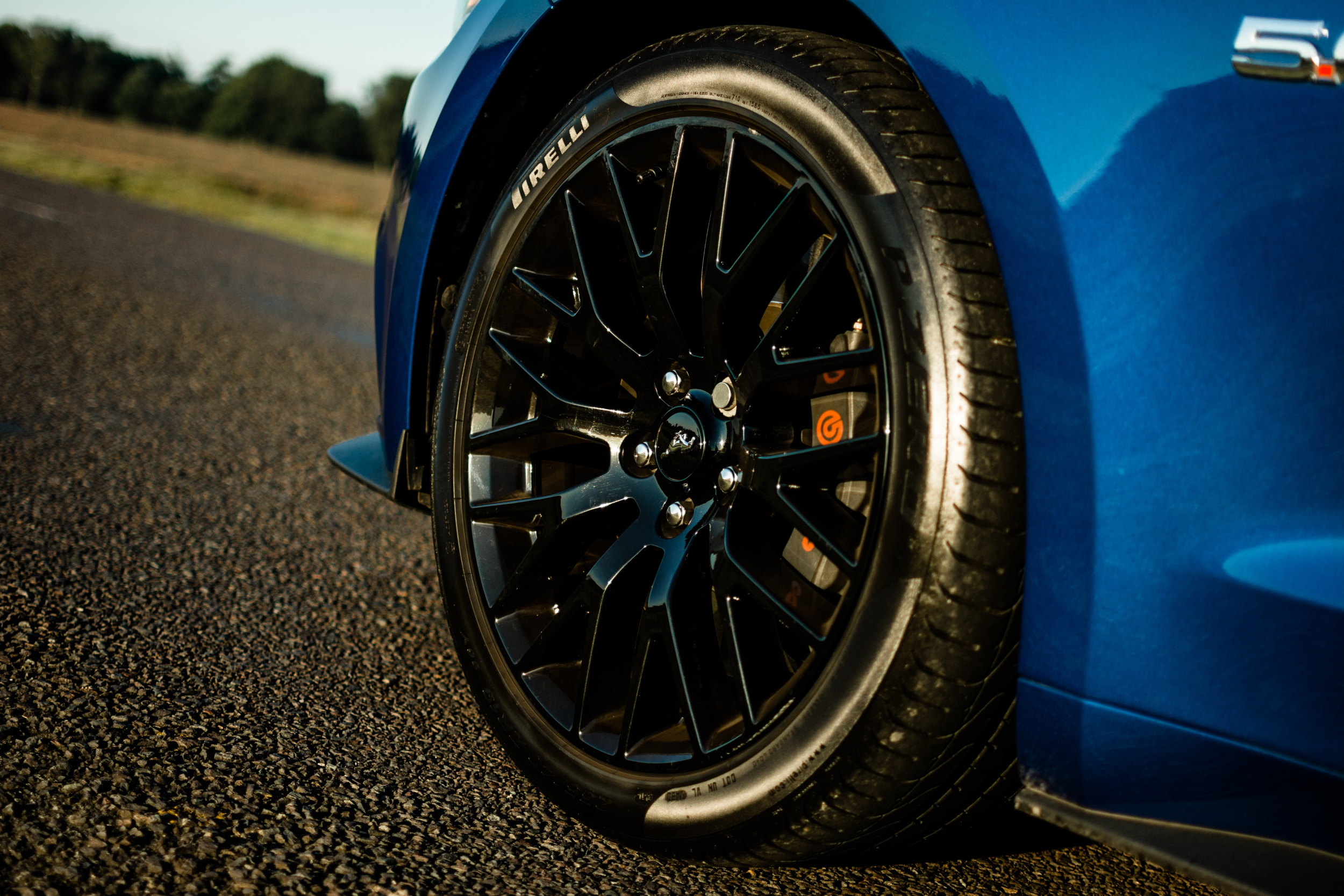 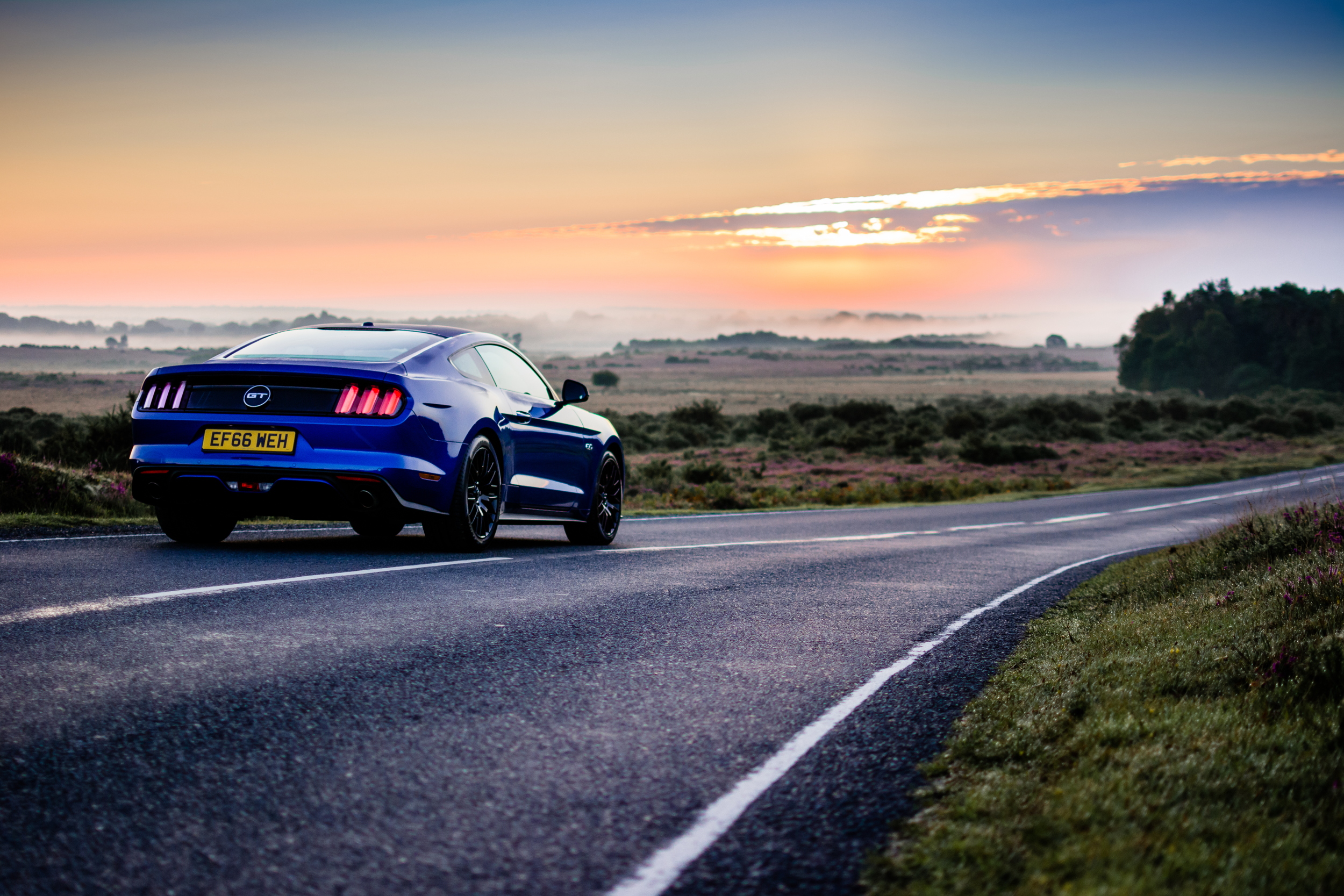 Perhaps this is helped by a number of little nods to the muscle car’s illustrious history. The three-bar rear lights are evidently inspired by the design of the original Mustang’s, while the gaping front grill, jutting out from the end of the bonnet, could only be from one car.

Yet, this isn’t pastiche. Unlike some former Mustang generations (including the previous car), Ford’s latest pony doesn’t feel retro. The 2017 Mustang is sharp-hipped and chiselled.

Up front, the gorgeously angular headlights make the car look completely at ease in the 21st Century. Like some of Ford’s recent front ends, it does have a touch of the Aston Martins about it… Okay, so the 2017 Ford Mustang GT is good looking, yes. But, the engineers in Dearborn don’t intend for this to be a mere poseur’s car.

Yes, for us supposedly eco-friendly Europeans there is the option of a 2.3-litre EcoBoost engine (the same powerplant from the current Ford Focus RS). It’s a good engine in its own right – and a lot less thirsty –  but in a Mustang, it’s like ordering an alcohol-free beer. It just ain’t right.

“There’s no need for an artificial ‘Drift Mode’ here”

The latest V8 lump puts out 416hp, enough torque to reverse the earth’s rotation and, for the first time, puts its power down through a proper mechanical limited-slip differential. There’s no need for an artificial ‘Drift Mode’ here. 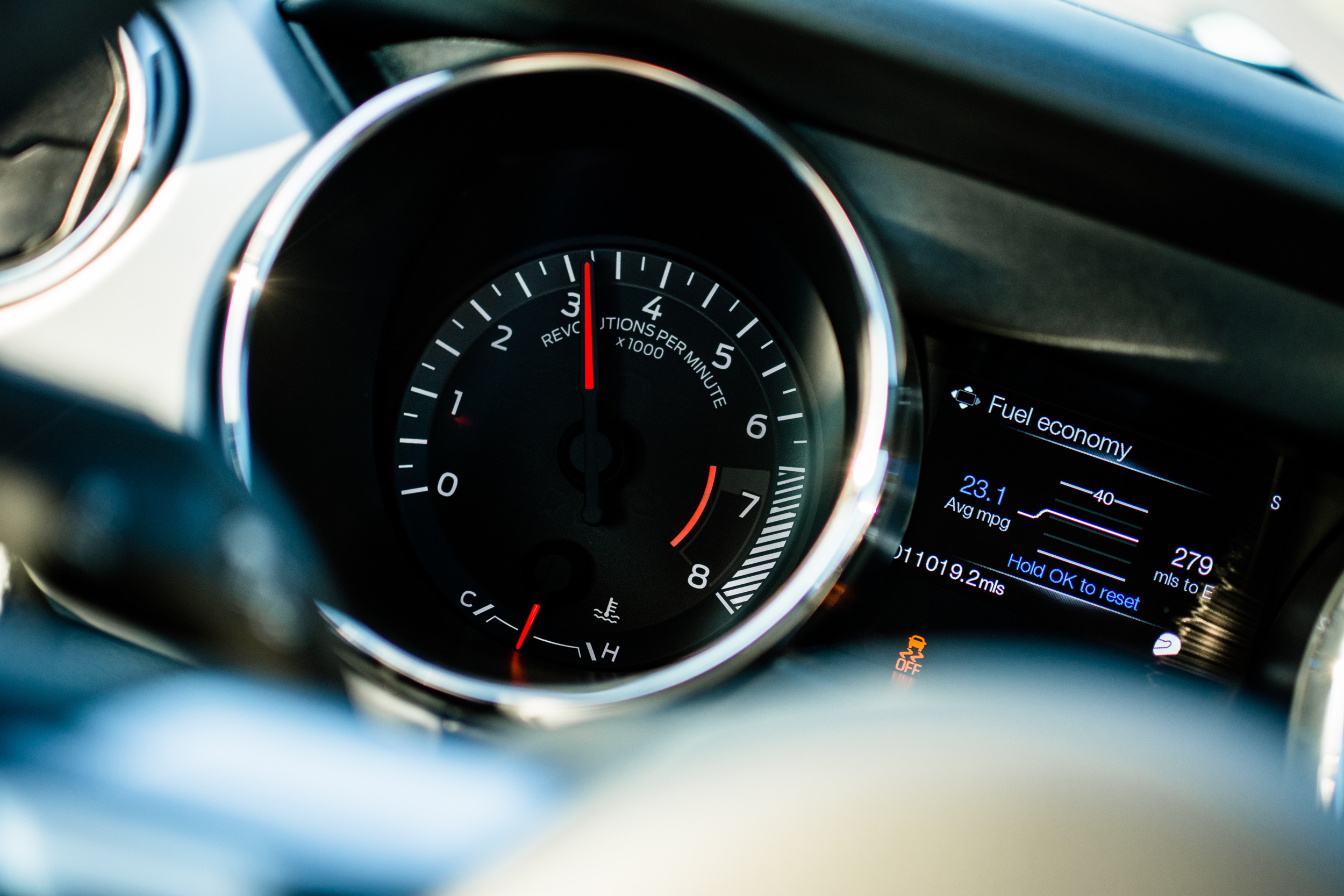 Gearbox-wise there’s an old-school eight-speed automatic or, for three pedal enthusiasts, a slick-shifting six-speed manual. You already know which one we’d plump for.

Finally, to help the Mustang tackle something us Brits call ‘corners’, Detroit has – at last – fitted a proper, multi-link rear suspension system to the Mustang. Y’know, like a load of European cars have had for a decade or two. Hallelujah? 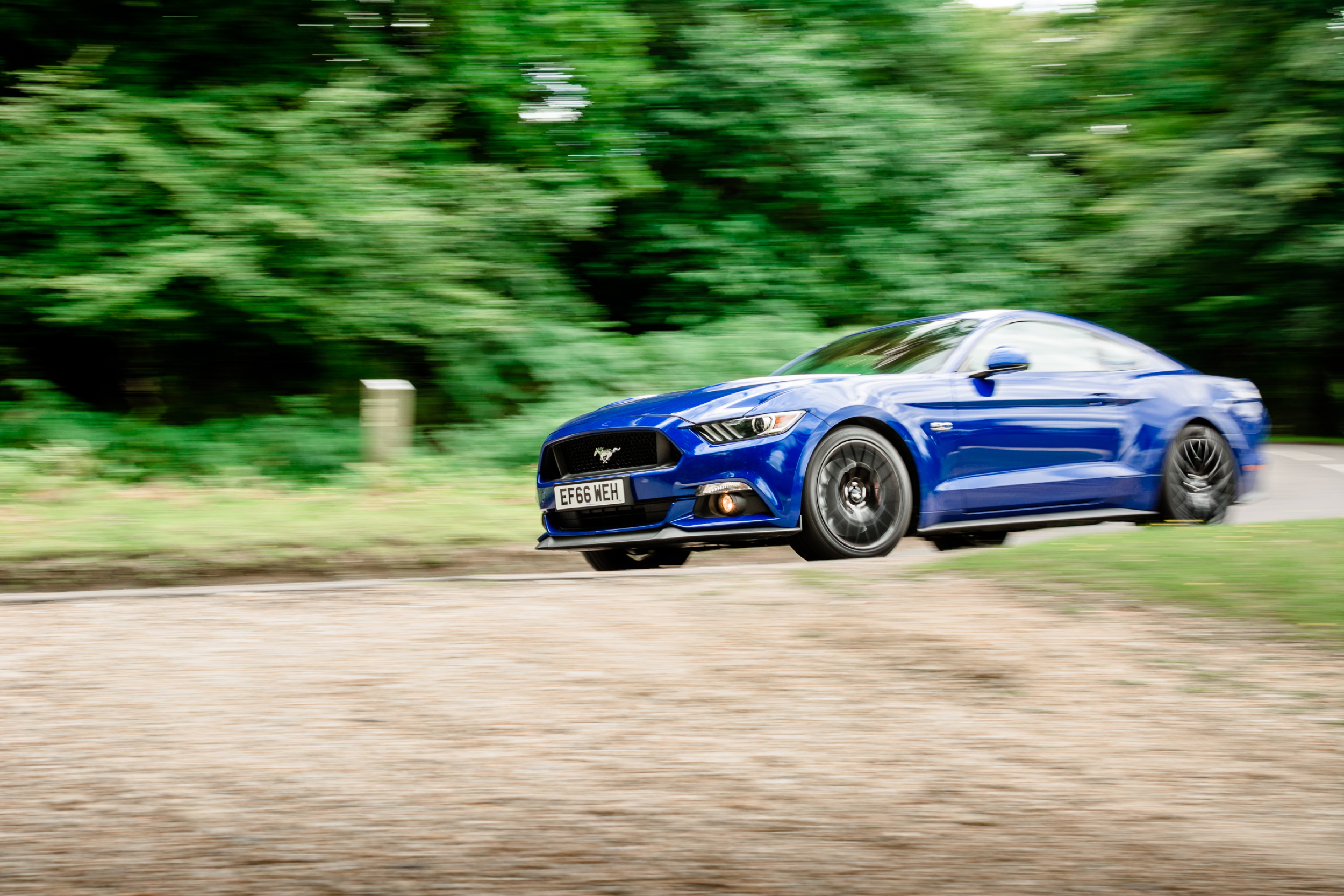 Few cars can rival the occasion of stepping into a Ford Mustang and firing it up for the first time. Sure, supercars are pretty damn special, but we’re talking about a 400hp-plus car here that costs just north of £38,000.

Push the starter button and the V8 grumbles into life. Instantly, even a 4:30am start becomes worth it (even if your neighbours may not agree quite so vociferously).

At the bottom end and through the mid-range the engine note is a mere tuneful burble. However, bury the throttle and let the thing rev all the way to its near-7,000rpm rev limiter and the rumble grows thunderous, perforating the air with a smooth V8 machine gun chatter. 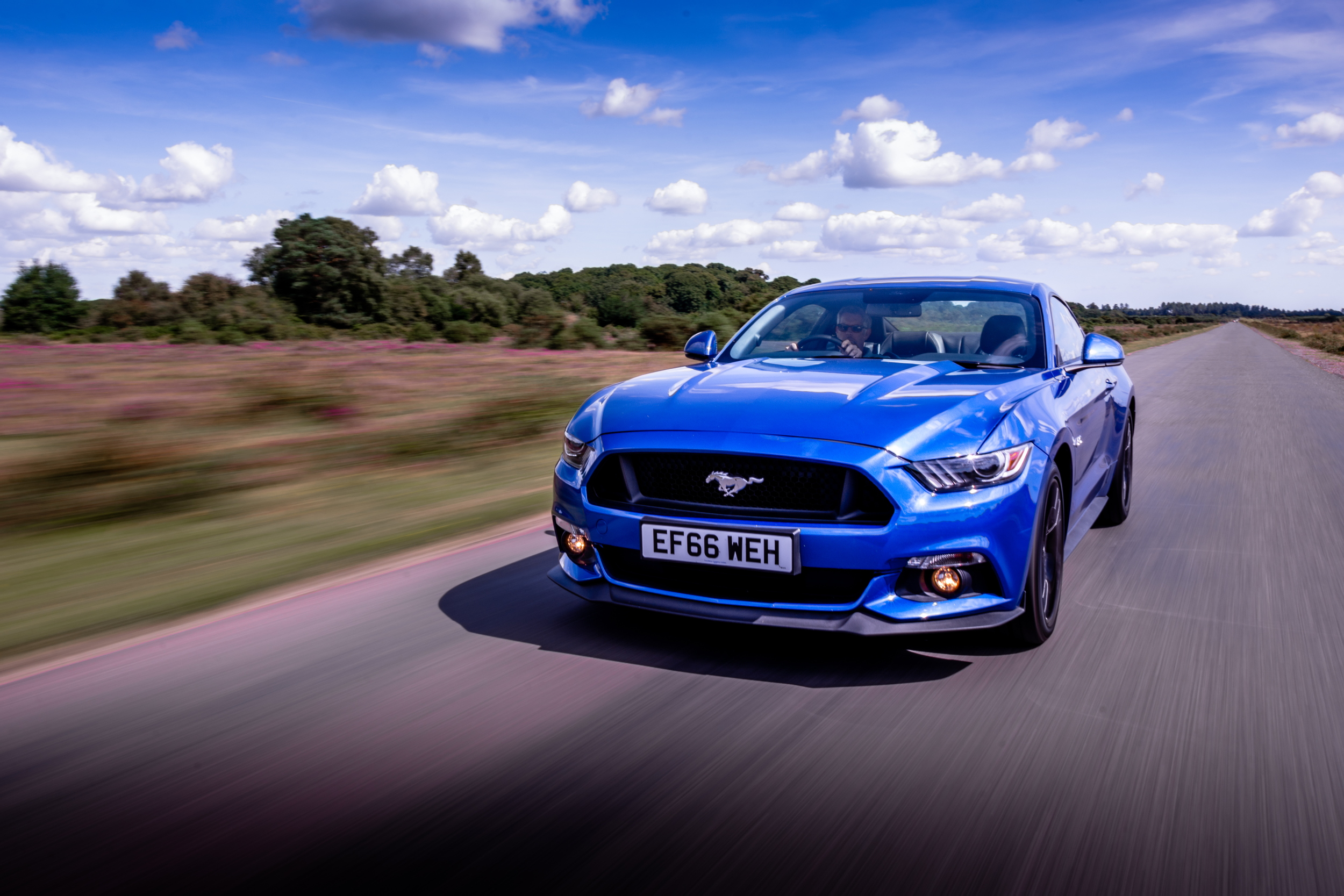 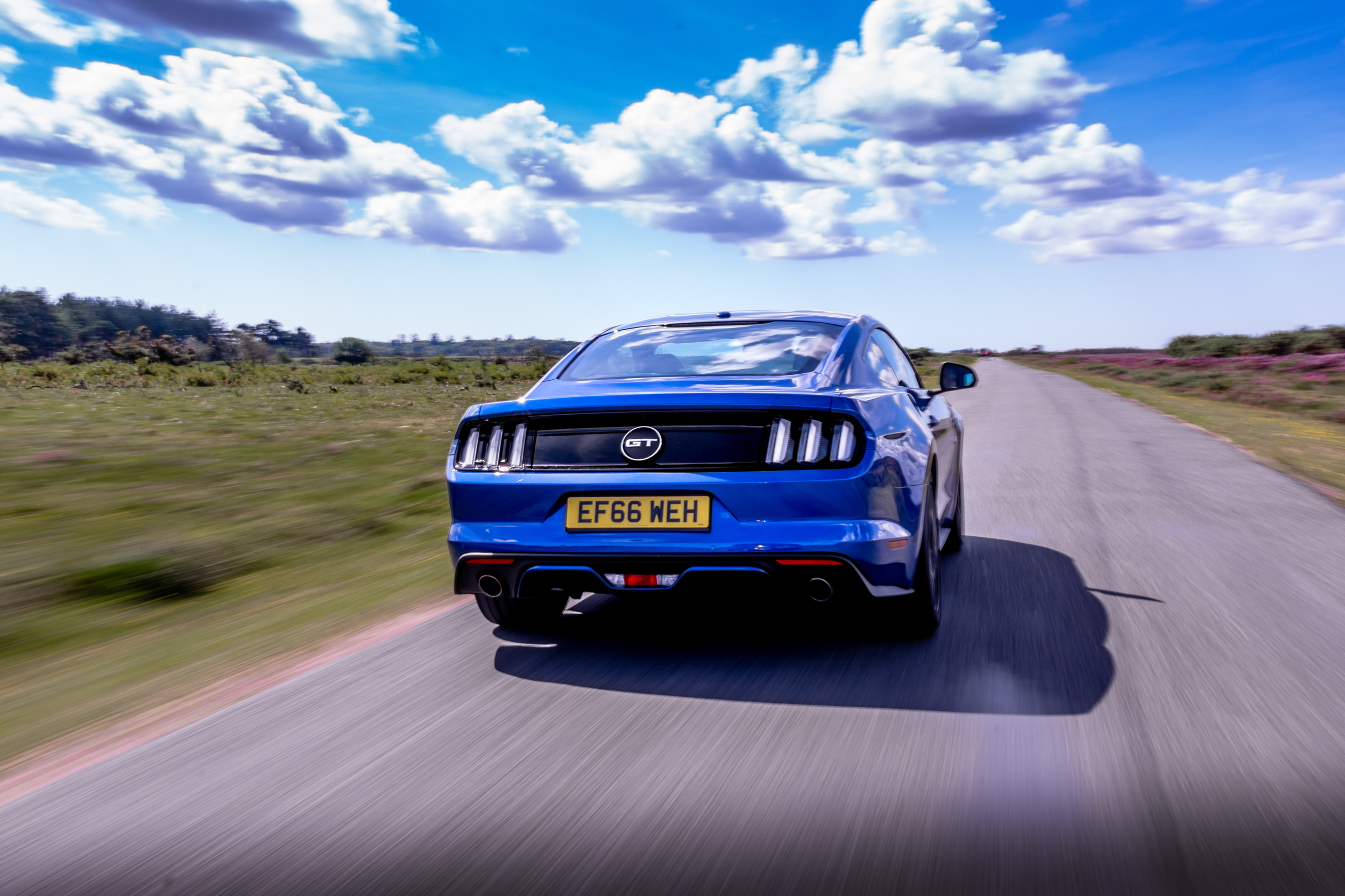 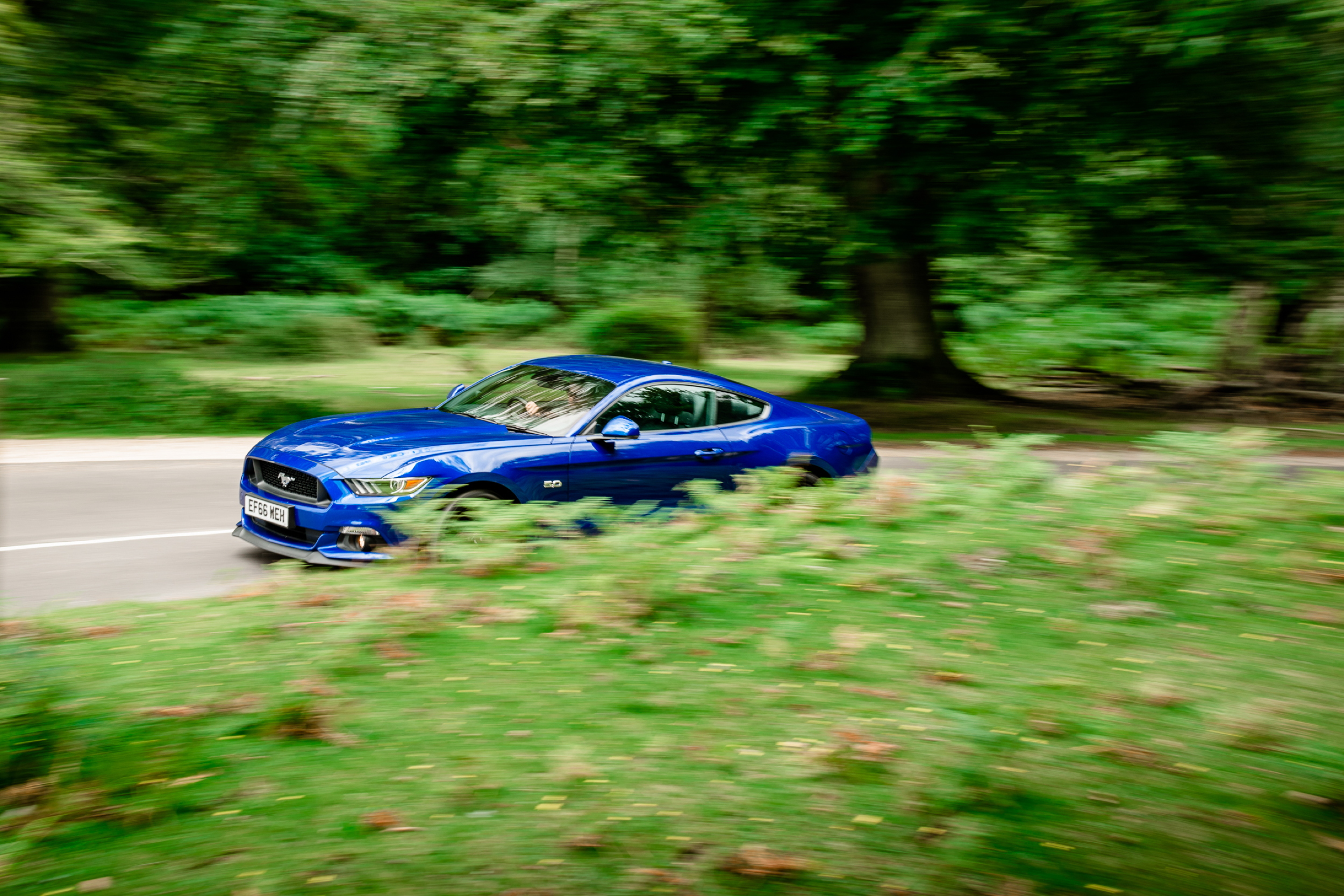 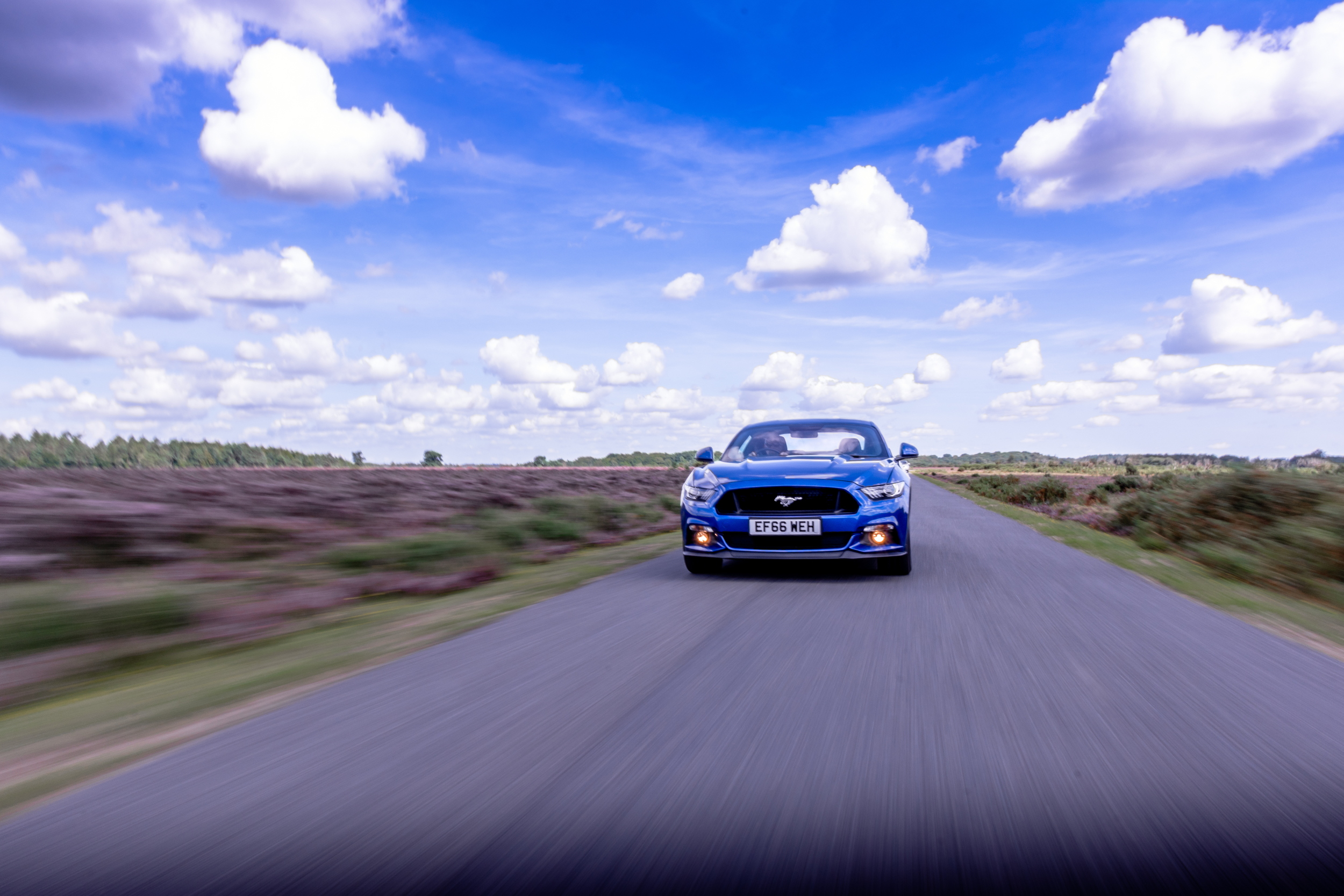 In an age where engine notes are seemingly artificially altered and enhanced at will, the latest Mustang seems surprisingly genuine too. There’s no switchable exhaust; you get the same roar in the normal driving mode as you in ‘Track’ and there are no attention-grabbing crackles on the overrun.

The V8 doesn’t really need any gimmicks to shine though. The purity of its soundtrack is matched by an equally sharp throttle response and a willingness to sling the fastback coupe towards the horizon, even from a fifth gear crawl. There really is no replacement for displacement.

Coupled to the six-speed manual ‘box, the Mustang provides a gloriously old-school powertrain. The gear lever snicks through each shift with a little heft but barely any movement across the gate, while the clutch – to paraphrase Goldilocks’ immortal words – is weighted “just right”. 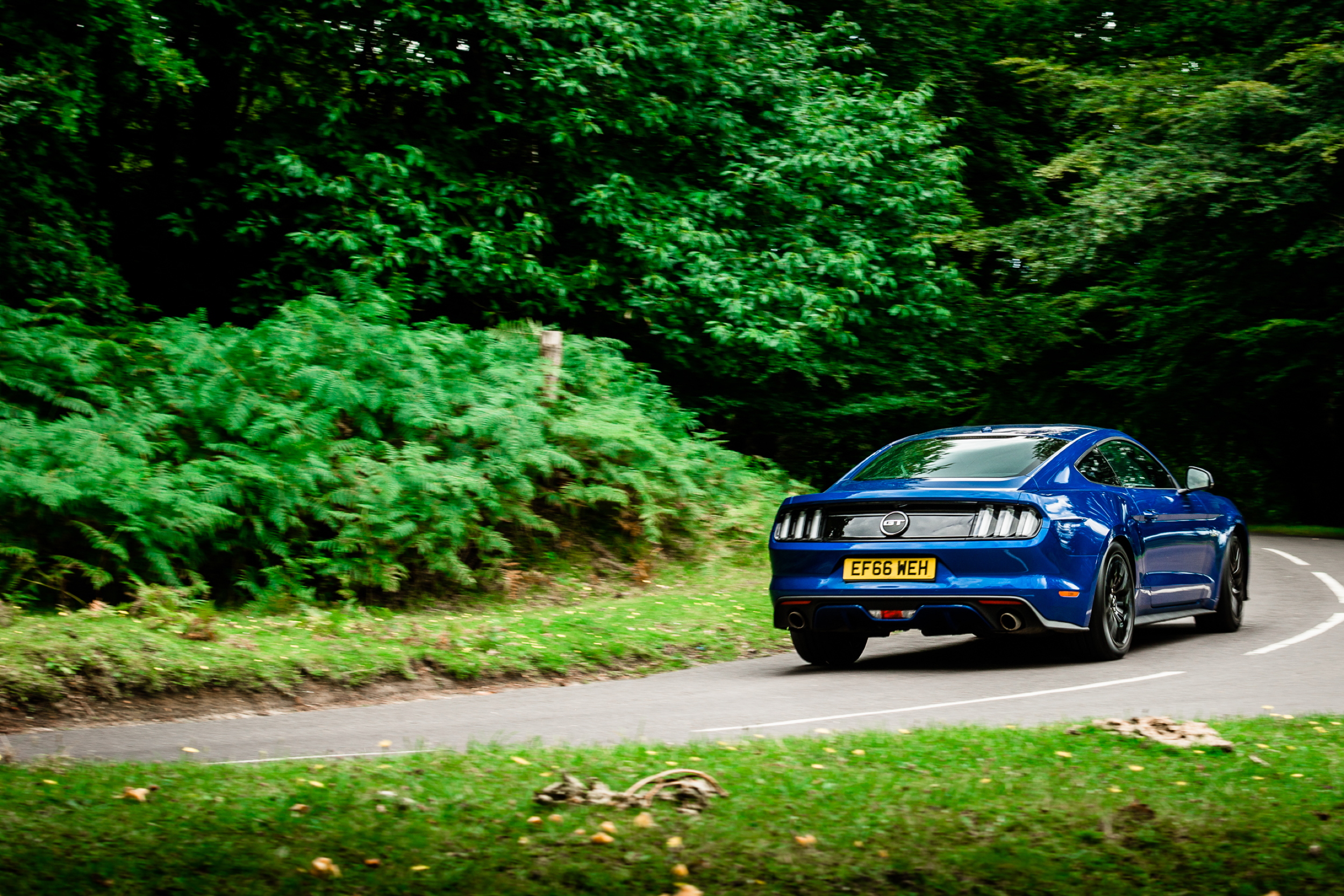 Of course, you expect a Ford Mustang to go well in a straight line though. It’s what the internet has told you. The problems come when faced with a corner.

Bends, however, are not the new Mustang’s Kryptonite. Sure, it’s never going to rival a Porsche Cayman in the dynamic stakes, but for a near two-tonne Coupe (yep, it’s no featherweight) Ford’s latest muscle car isn’t completely trounced by its agile European opposition.

There’s a little more pitch and roll through the corners – and the electric steering, while well-weighted, doesn’t provide as much feel as you always want – yet the Mustang lets you know enough about what’s going on underneath you to allow you to push on.

“Yes, shock horror, the Mustang is a pretty easy car to drift. Or so we’ve heard. Honest… “

What’s more, with 416hp to play with, once you’re into a bend, you can adjust the car’s attitude with your right foot. Thanks to the pliant chassis, go hard down on the throttle and you can very easily go full hooligan.

Yes, shock horror, the Mustang is a pretty easy car to drift. Or so we’ve heard. Honest… 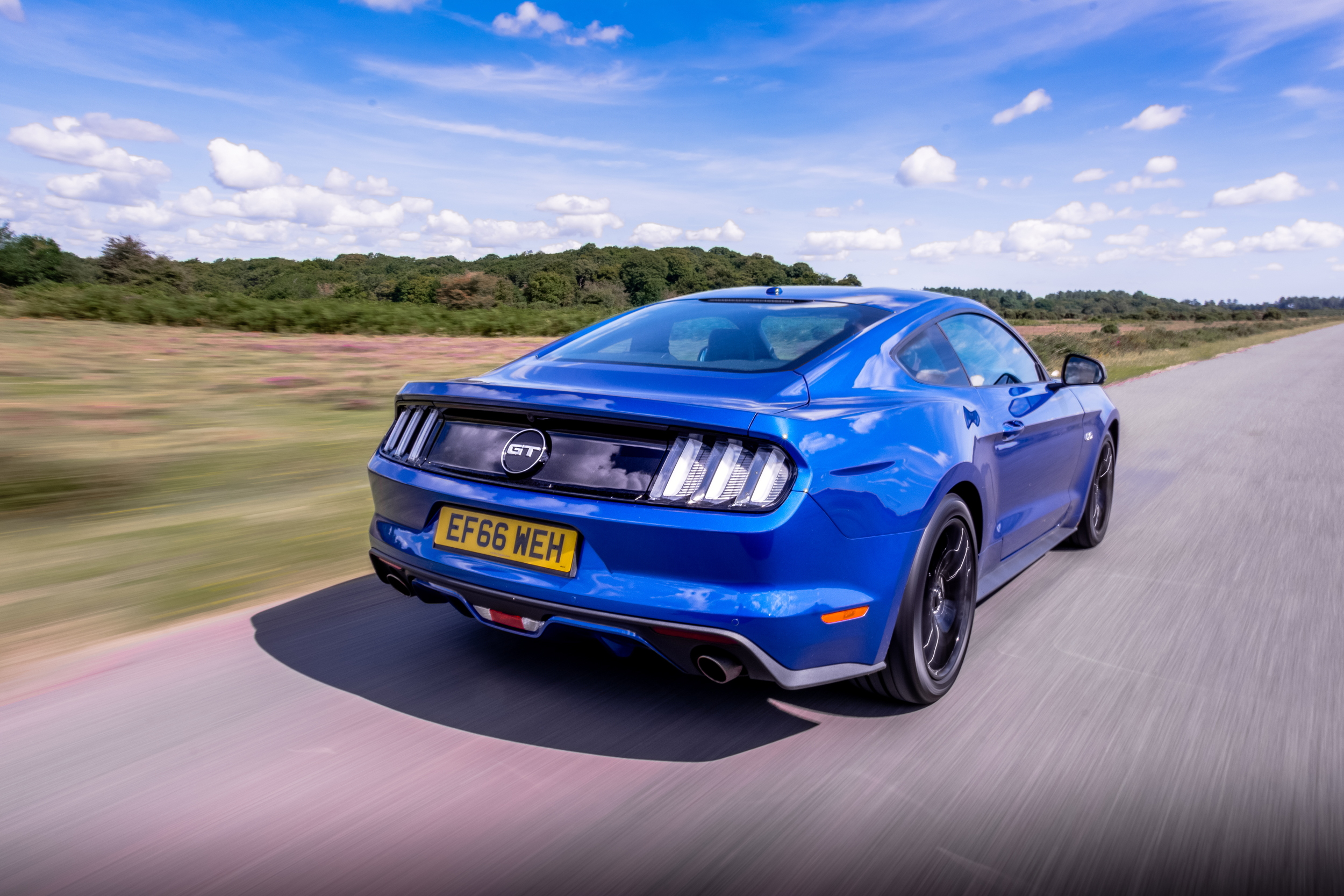 In terms of comfort, there’s quite a lot of road noise, which, given the size of the rubber boots front and rear, is hardly a massive surprise. However, the ride itself – thanks to 19-inch alloys rather than 20s – is pretty pliant, making the Mustang a more than amenable grand tourer.

While a little crashy over bigger bumps, the suspension does a good job of soaking up most imperfections, with the steering filtering out the harsher cambers of the road.

If there’s a disappointment dynamically, it’s the Brembo brakes. Around town, the stoppers are overly grabby. When pushing on though, it quickly becomes obvious that the brakes are having to work overtime. Muscles cars have always been designed to provide plenty of bang for your buck. After all, they’re the working man’s sports car. The new Ford Mustang GT is no different.

Sure, on a tumultuously twisting B-road, a European hot hatch is probably going to show it a clean pair of heels. But, for around 20 per cent more than the cost of a Volkswagen Golf R you can get yourself a proper rear-wheel drive coupe with 30 per cent more power.

The big thing though is that, in an age of seemingly homogenous automobiles, the Ford Mustang GT is a shining beacon in terms of genuine character. Few cars feel like more of an event. It may not be quite as refined (both dynamically and in terms of its interior quality) but the end result is still very special and is a sure-fire way to put a smile on your face every time you jump in the driver’s seat.

Just make sure that you get pally with your local petrol station. You’re going to be visiting. A lot.