It has taken Ford a long time to realise us Brits (and the rest of Europe, for that matter) quite like American things. We pined after the Mustang for so long that the Blue Oval got so sick and tired, it went back to the drawing board and fashioned a vehicle that could be lapped up globally.

The same can be said for gigantic F-150 Raptor, which is larger than most houses here in Blighty and boasts a detuned version of the GT’s almighty V6 engine, but anyone who has ever seen one trundling down the road instantly turns to putty and then the internet to enquire about the cost of importing one.

But let’s get real for a second: the F-150 Raptor would be about as practical for use in Europe as a pedal-powered wheelchair and anyone mad enough to have shipped one over will attest to the struggle with supermarket car parking spaces and there astronomical fuel bills.

So, perhaps off the back of the Mustang’s resounding success, Ford decided to give Europe its own Raptor – an F150 Lite, if you will. Based on similar underpinnings to the current generation Ford Ranger pick-up, this beefed-up machine packs the sort of off-road suspension technology and ‘roid rage styling that should go some way to scratching that extreme pick-up itch.

Ford claims its Ranger Raptor is “the toughest, highest performing version of Europe’s best-selling pick-up” and we’re not ones to argue. After all, serious dosh has been spent on an overhauled chassis and bespoke Fox suspension system that will not only allow it to do pretty tough 4×4 stuff, it can also tear up sand dunes.

Let’s get this bit out of the way now, because you’ve probably heard plenty of petrolhead mention it, but yeah, the Ranger Raptor has a ‘Baja’ mode. Similar to the numerous driving options found in many modern vehicles (think Eco, Comfort, Sport), the Ranger Raptor is quipped with dynamic settings that adjust the throttle mapping, steering feel and traction control systems. 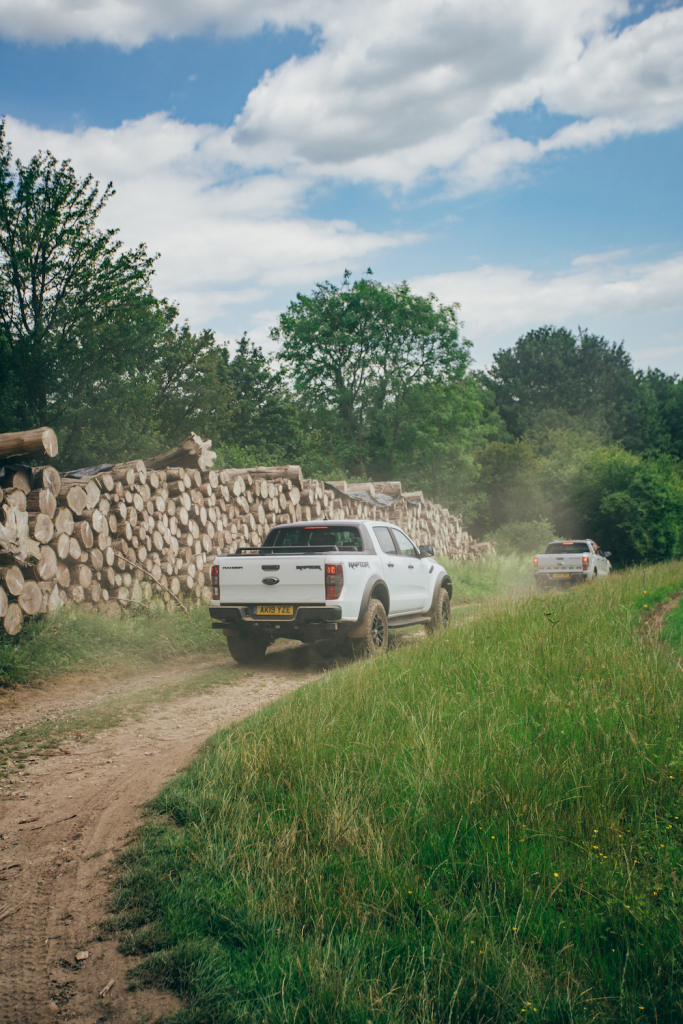 Baja Mode essentially sets the Ranger Raptor in its angriest guise, unleashing the most free-spirited traction control settings, the most sensitive throttle mapping and the firmest steering options to allow for the sort of sand dune bashing that goes down at the Baja 1000 – the agonisingly insane endurance rally through Mexico’s Baja California Peninsula.

Partly because it isn’t exactly festooned with miles of open desert and notoriously angry farmers don’t like you tearing up their land, the UK isn’t really a place to unleash Baja Mode. Perhaps if you’re lucky enough to own a quarry or a decent stretch of gravel, it will offer the occasional giggle, but for most ‘normal’ off-road pursuits, it will feel a tad overkill.

And that’s a shame, because on our test route, which took in some chalky surfaces around the famous Goodwood Racing Circuit, the Ranger Raptor proved and absolute hoot, cresting potholes and attacking the loose shingle with a gusto that most modern pick-ups just can’t match. 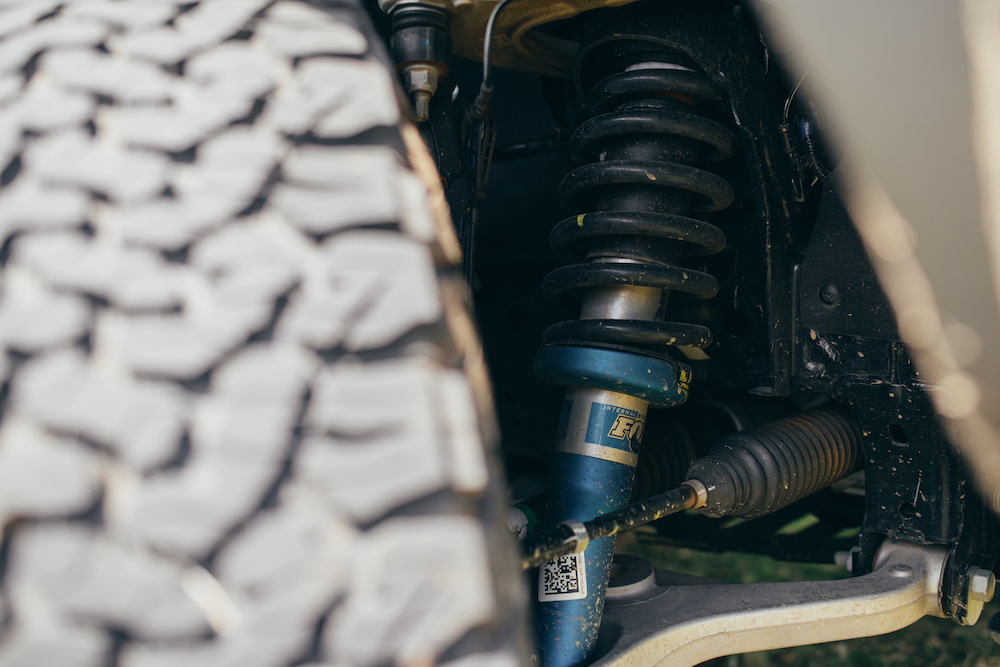 The Fox suspension and chunky BF Goodrich tyres (with a reinforced sidewall to protect against flint scrapes) are absolutely brilliant at steam-rollering lumps, bumps and gigantic holes, gliding over some fairly demanding terrain like a magic carpet.

Unfortunately, Ford hasn’t gone ‘balls-to-the-wall’ in the engine department, instead opting to fit the Ranger Raptor with a very UK-friendly 2.0-litre bi-turbo diesel engine. It kicks out a reasonable 213hp and 500Nm of torque, but anyone with any pick-up knowledge will know that’s not enough to trouble the V6-powered VW Amaroks and similarly grunty six-cylinder Mercedes X-Classes of this world.

The frugal but slightly underpowered engine is a bone of contention that both the Ford engineers and spokespeople are very aware of, with one chief product bod explaining that some existing customers are already up in arms about the fact the brutish 3.2-litre TDCi engine is on the way out. 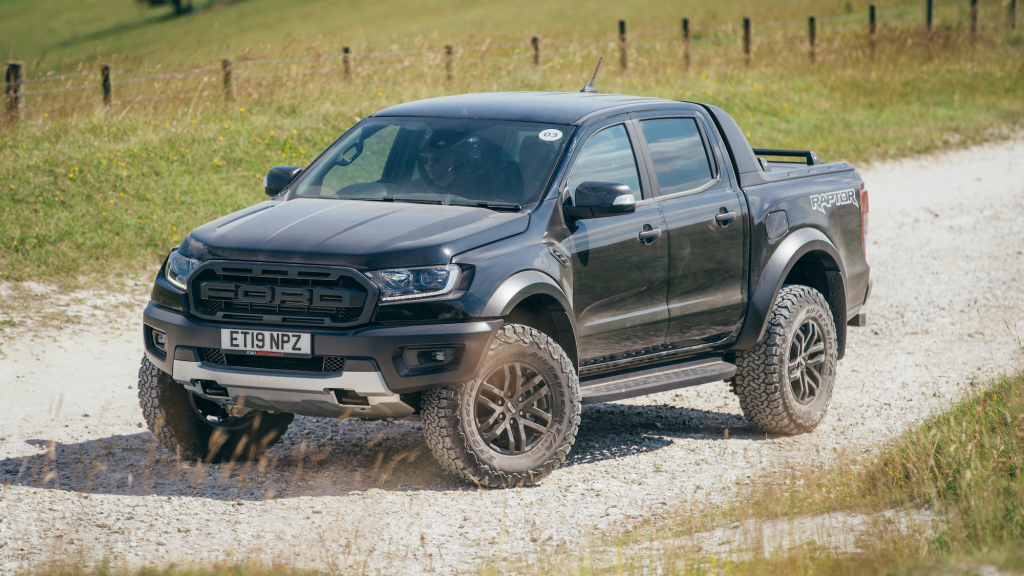 ‘Displacement anxiety’, he called it. Because there’s no replacement for displacement, is there? Well, there is, it’s called turbocharging and this new 2.0-litre diesel is up 30Nm of torque on its predecessor and some 14bhp, but the vehicle could easily handle more. In fact, it is crying out for more.

The other slight issue is payload, as almost everything else on the market will happily carry a tonne in its pick-up bed, making them A) very handy when you pop to Jewsons for a one-tonne bag of sand and B) much cheaper to tax due to favourable Benefit in Kind loopholes and VAT reasons.

But as soon as you look past the fact the Ranger Raptor is a very expensive toy, you start to appreciate just how awesome it is. The bespoke bolstered seats are stupidly comfortable, meaning passengers barely notice the fact you’ve just jumped over a cow after taking a shortcut through a farmer’s field. 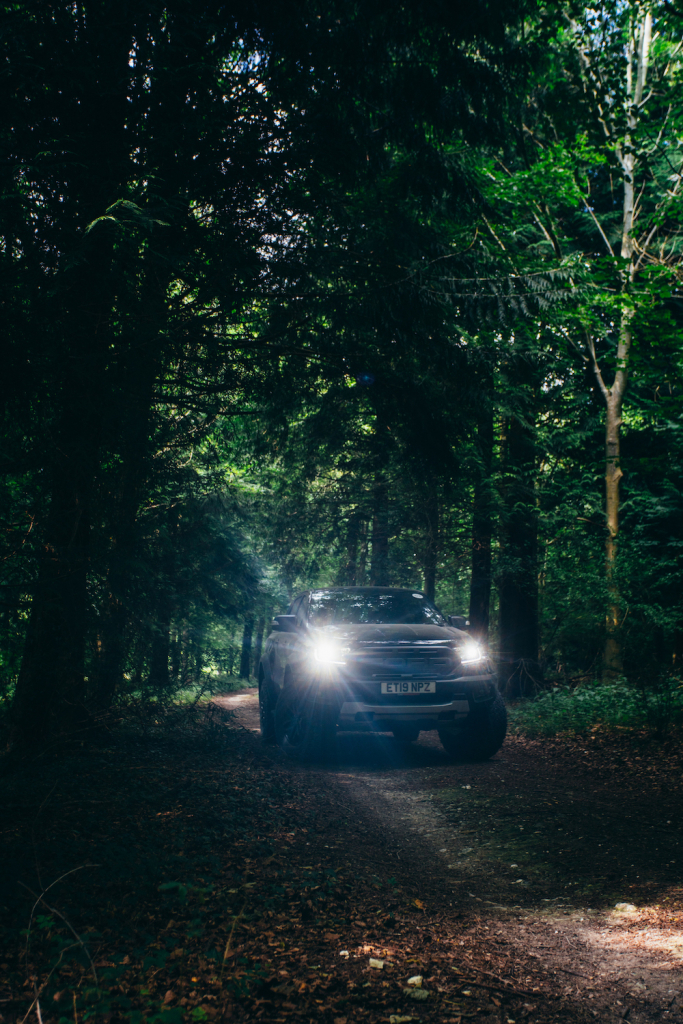 There’s every bit of infotainment tech available in the Ford arsenal, including a trick sat-nav system with a unique “breadcrumb” feature that allows off-road enthusiasts to do a sort of muddy Hansel and Gretel to find their way back home.

It’s all extremely butch and rugged, but perhaps the most surprising thing is just how easy Raptor is to live with. Yes, it features a 150 mm wider track and 51 mm taller ride height compared to the Ranger XLT, but it’s not hugely noticeable on the road.

Granted, the skinniest of British B-routes might be a little daunting to someone stepping out of a Ford Focus, but I’ve lived with a VW Amarok for nearly six months now and it felt no different. It still fits in a supermarket parking space and it’s not tall enough to bother those annoying barriers found at airports. 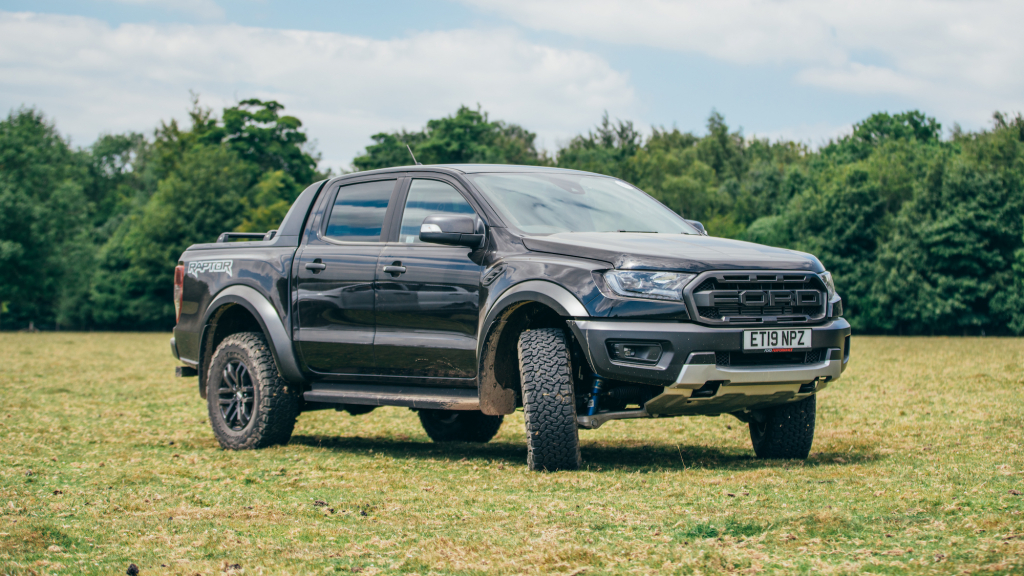 Even the jacked-up Fox suspension and chunky tyres, which should theoretically be absolutely useless on the road, remain fairly quiet and relaxed at higher speeds. But despite the appearance of a  Sports mode, you’re probably not going to want to attack a hairpin bend with the same gusto as you would in an Alpine A110, but it handles well.

In fact, get the Ranger Raptor up to speed and it positively glides over the scarred surfaces of British roads with the same wafting nature that it applies to drifting in the desert.

You want one, don’t you…

There are so many things to love about this Ranger Raptor, from its ludicrously flared arches and ‘stacked’ power lines, to the 3D Ford badging on the menacing front grille. It looks the part and the engineering invested into the chassis and suspension should be applauded. 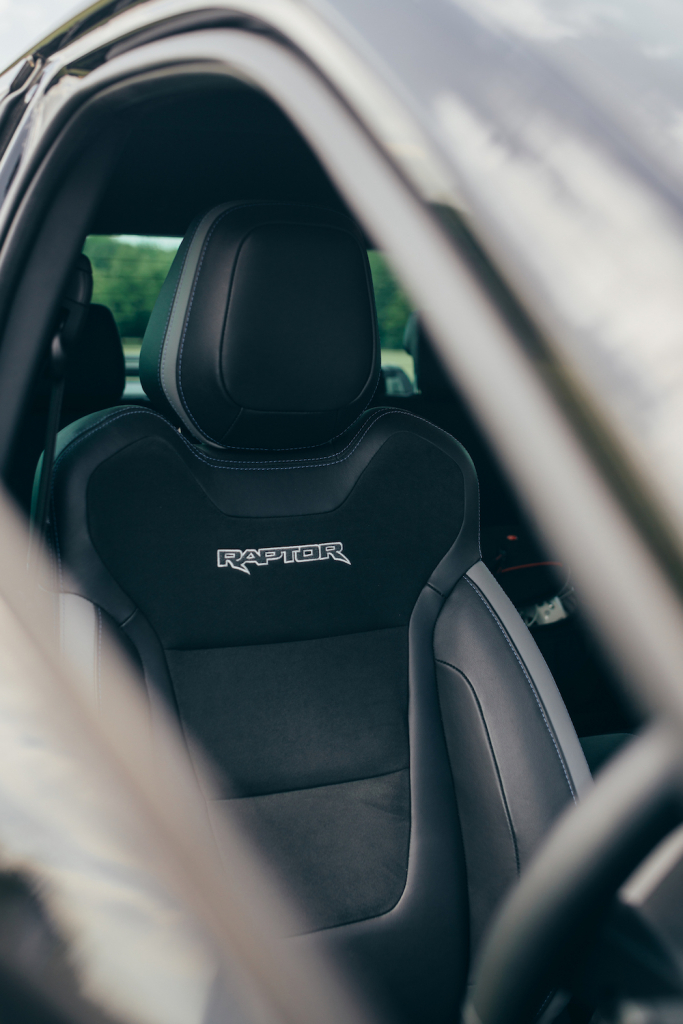 Plenty will complain about the lack of horses stashed under the bonnet, but a big American V8 (or even a European V6) just won’t cut it in a country where monthly fuel bills often stack as high as the average mortgage for most.

And yeah, it doesn’t carry a tonne, it costs a lot of money and some of the general fit and finish in the interior could be better. But this is a vehicle that boasts that sort of angry aura that makes people do irrational things. Irrational things like parting with £50,000 and moving closer to a desert. 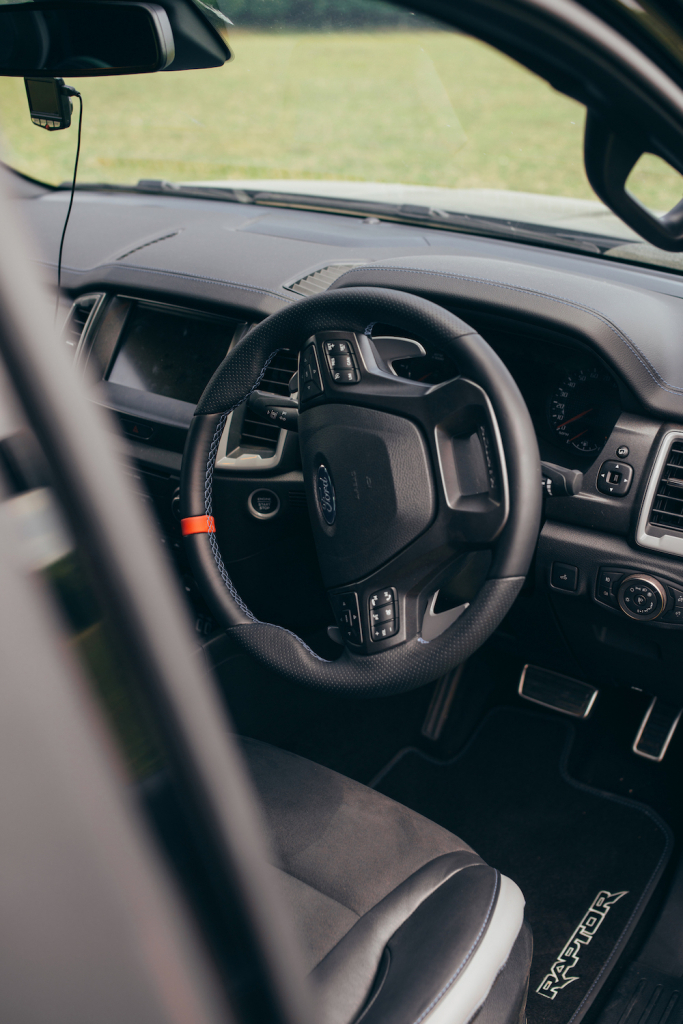