Flick on the TV and it’s highly likely your favourite show is interrupted with commercials that see beautiful people in Nissan Qashqais and Volkswagen Touaregs heading off on a mountain biking exploration mission or cramming a boot with kite surfing equipment. But visit any stand-up paddle boarding hotspot or downhill mountain bike centre and the car park is absolutely choc full of Volkswagen Transporters, Mercedes-Benz Vitos and, of course, the ubiquitous Transit van.

Ford, like many other manufacturers understands this, and it has cottoned on to the fact that there is a large swathe of customers out there that want the luxurious trappings of a SUV with the handy load space and load-lugging capabilities of a van. Enter the Trail trim.

Alongside more purposeful bodywork, an imposing front grille, unique alloy wheels and a smart, leather-clad interior comes a limited slip differential, which cleverly pumps power to the wheel with most traction. This allows it to tackle some tricky, off-road (ash) situations. Stick some proper knobbly rubber on it and it’s likely you could take the Transit Trail to some pretty interesting places. 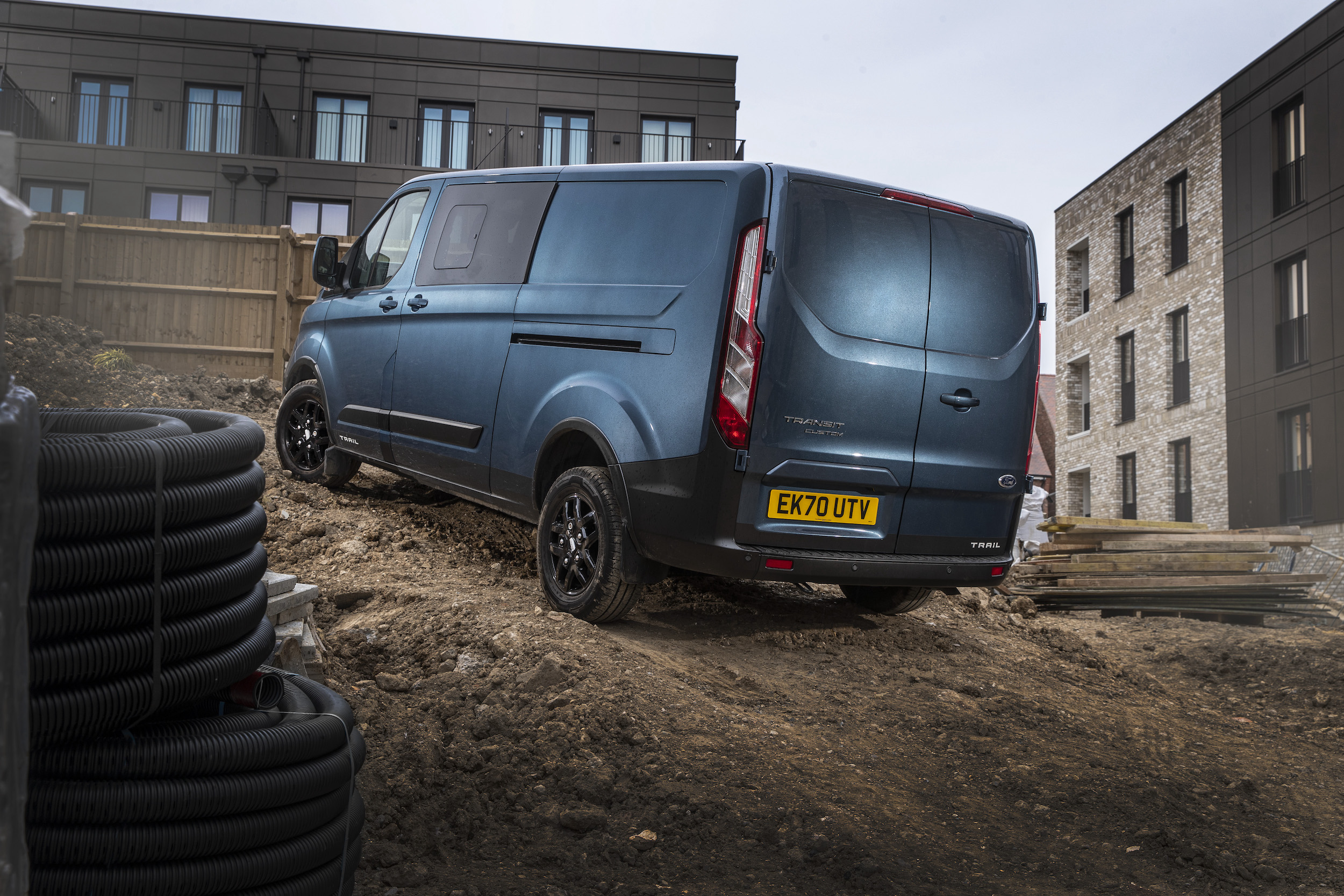 There is a choice of two diesel engines, with a lower powered 130hp version of the 2.0-litre EcoBlue diesel kicking off the range and a punchier 170hp version for those who appreciate a glut of torque. It is the latter that I tested here and it’s mated to a beautifully slick six-speed manual gearbox.

Granted, the big diesel isn’t as quiet or as smooth as those engines found in the latest Volkswagen Transporter 6.1  and I’d argue my own T5.1 is a better machine to drive, but it’s perfectly fine for most situations and makes an excellent long distance cruiser. A combined fuel economy figure of 35.8mpg ain’t bad, either.

Inside, most non-commercial vehicle buyers will opt for the double cab -in-van variant, which sees enough seating for six adults (so long as the driver doesn’t mind rubbing legs), while retaining an impressive load space in the rear, especially if opting for the longer wheelbase models. 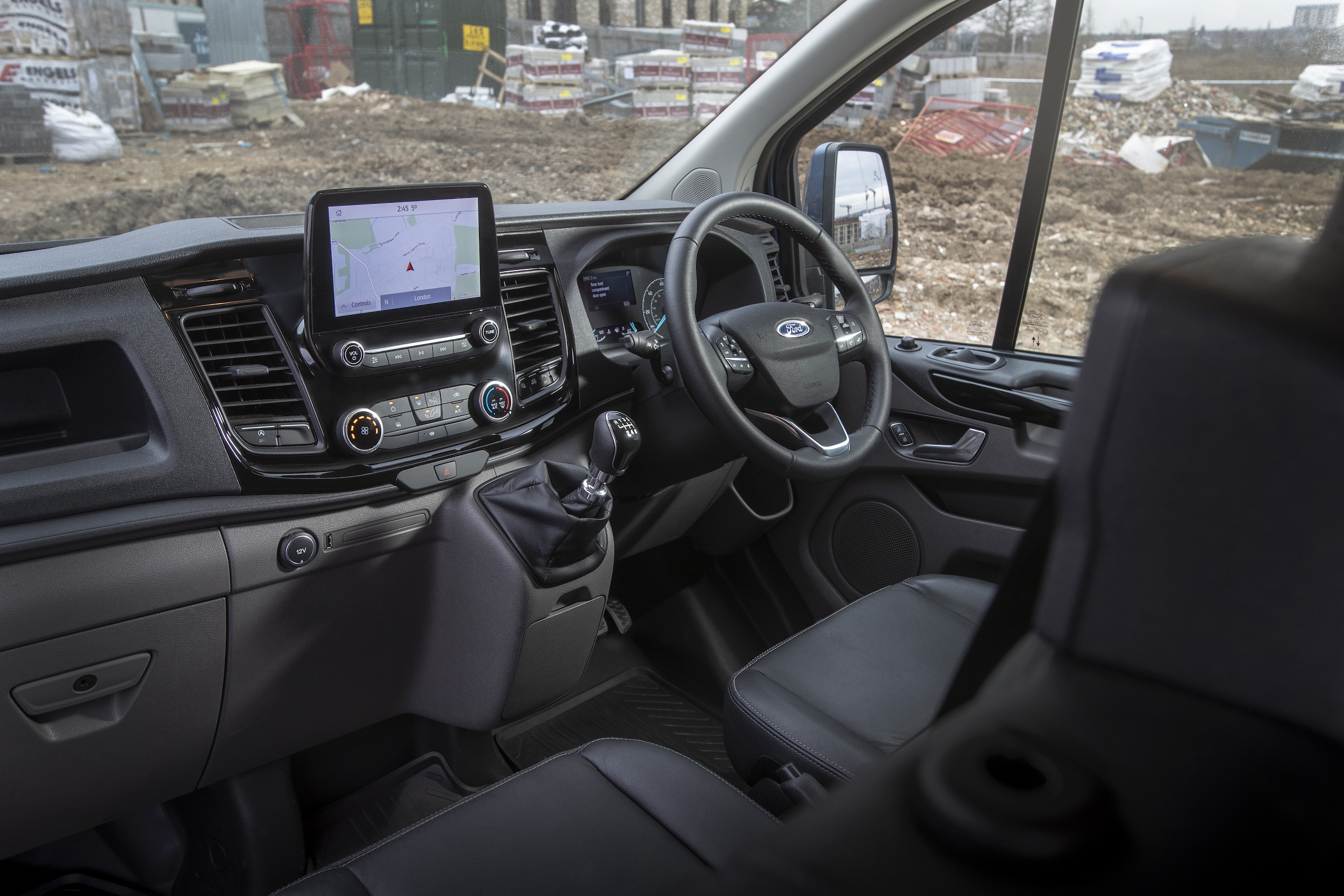 As previously mentioned, the seats are wrapped in a premium leather but that’s really where the luxury ends, as the remainder of the cabin is covered in hard wearing plastics, cubbyholes for big drinks and other overtly practical touches. That said, Ford has done a good job isolating a lot of the wind and road noise associated with vans like this and the driving experience is quiet enough to hold a conversation with those sat in the rear.

This Trail model is intentionally a much nicer place to reside than the cloth-covered utilitarian interiors of other ford commercial vehicles. This test model featured leather seats in the front and back, while infotainment duties were taken care of by an 8-inch full colour touchscreen infotainment system with Apple CarPlay and Android Auto.

However, this comes bundled as part of Ford’s ICE pack, which sees things like navigation, intelligent adaptive cruise control, lane keeping aid and additional USB slots for charging tech on the move. It retails at £912 but feels like a must-purchase if you’re looking to cover big distances or use the van regularly. 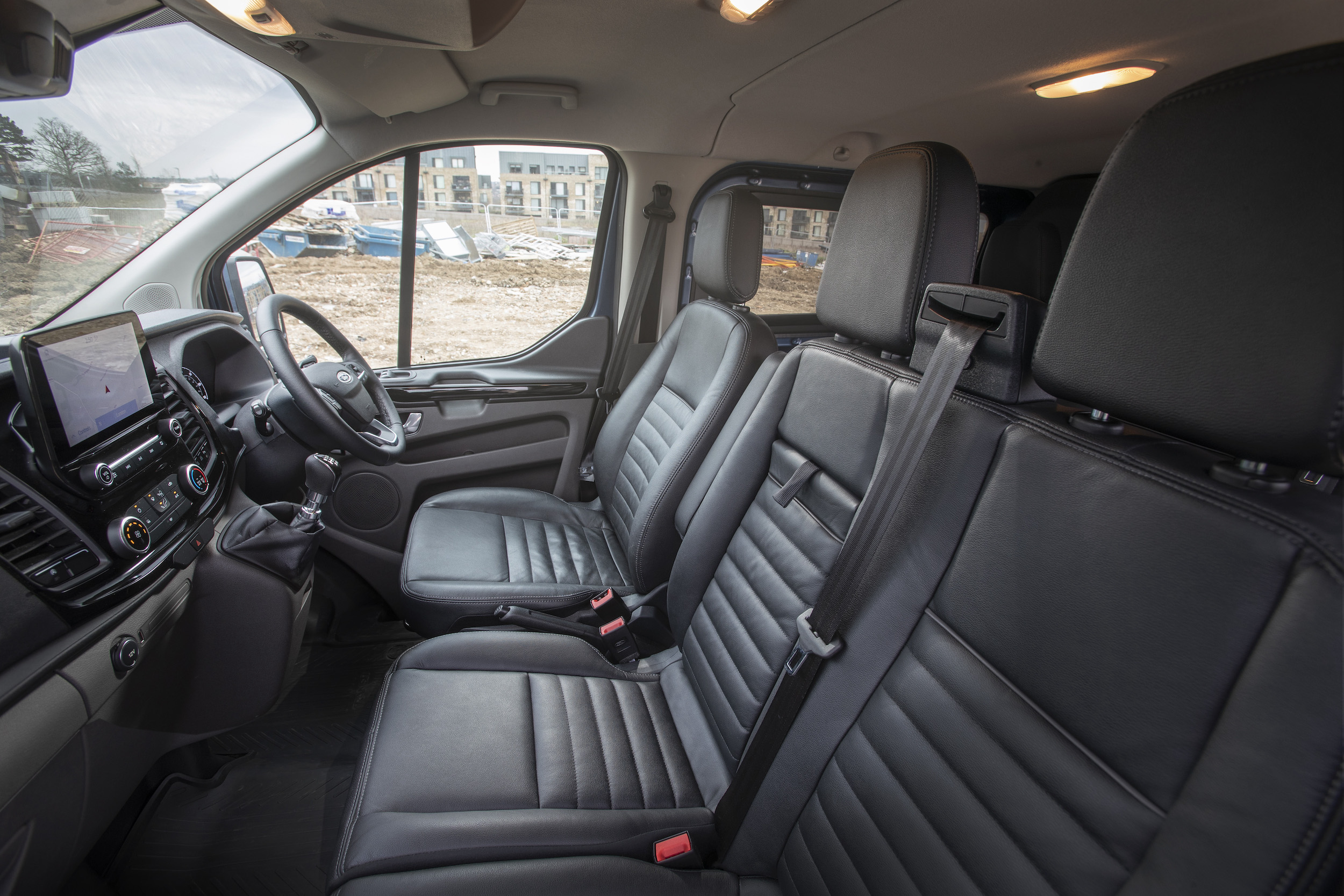 Ford’s infotainment system is simple enough to use and features various connected elements thanks to the embedded modem that comes part and parcel with this options pack. That said, the navigation is a bit naff, with its search functionality proving really fiddly and largely useless. Instead, it’s much better to plug in a smartphone and navigate this way.

Anyone used to more premium sound systems will likely find Ford’s audio offering a little weak, while rear passengers aren’t treated to any kind of additional speaker or sub-woofer packs. After all, this is still very much a commercial vehicle in a lifestyle dress.

Ford gets full marks for the practical touches though, with bountiful cupholders, stowage bins and cubbyholes to keep all manner of lifestyle accessories safe and secure… or simply allow the kids to fill it up with cuddly toys and bits of half-eaten sandwiches. 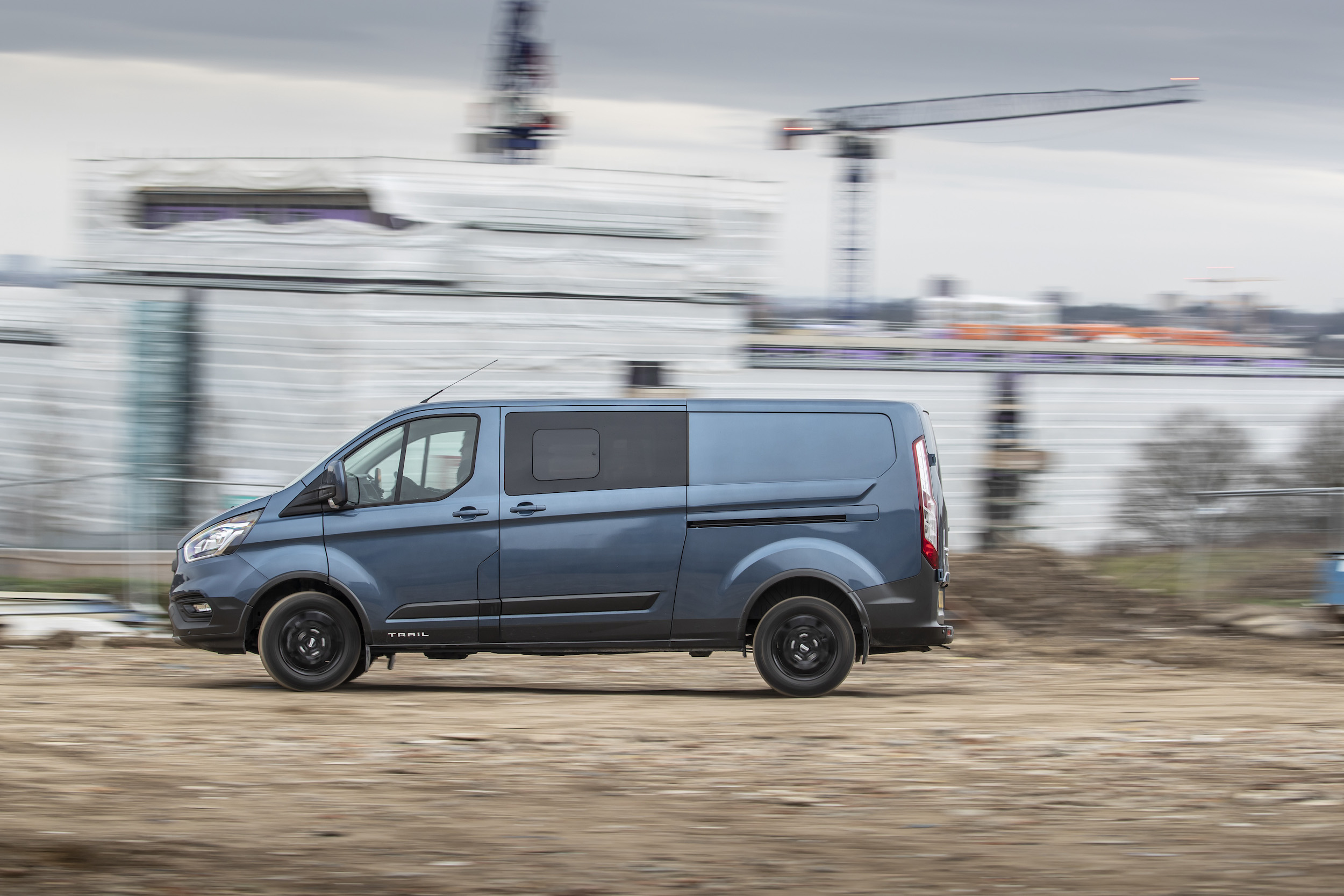 Option the longer wheelbase and the low roof height and you have a vehicle that will sneak under most underground car park height restrictions, yet can easily fit five or six mountain bikes in the rear with room to spare. Practicality really is the Custom Trail’s trump card.

Rear passengers enter the vehicle via a large sliding door, which is easy enough to operate, although customers can option dual side load doors on some Transit models. The Trail version also sits quite high on its springs, which means there is a bit of a step up into the cabin, which makes loading children a bit of a pain.

There’s a large bulkhead separating the rear land compartment from the passenger area, which makes the ride and general ambience much quieter and more comfortable, while that rear load compartment features plenty of lashing points and tie-down options. A nice touch would have been a 12V socket in the rear, but perhaps that’s just me. 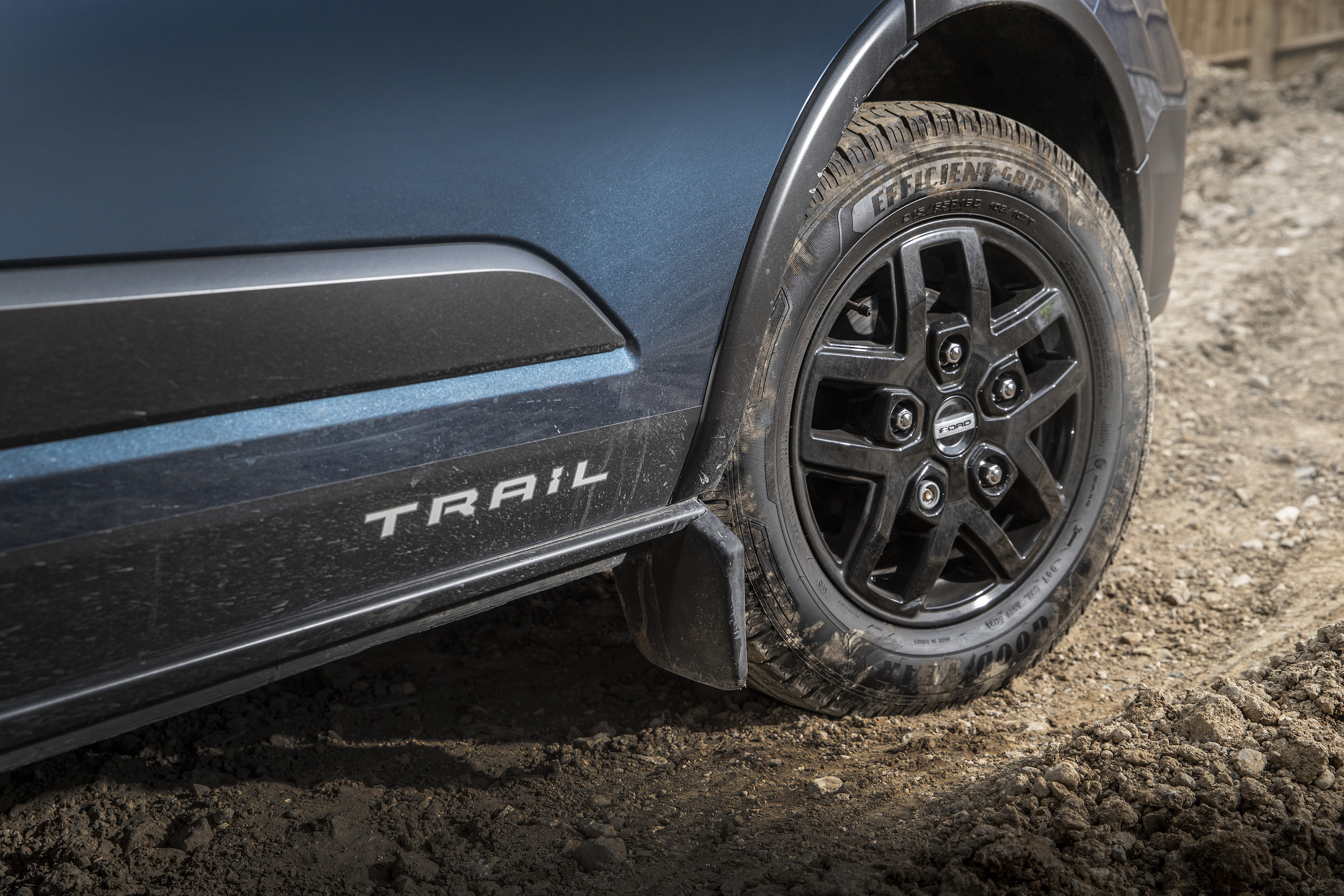 There is currently no hybrid option on the Trail model, so customers get just one 2.0-litre diesel engine to choose from, which is available with several power outputs. The more potent 170hp unit feels like the one to go for, as it packs a serious dollop of torque that’s perfect for hustling this longer wheelbase van up to speed, even when it is fully loaded. Customers can option a 185PS engine, but it’s not available in Trail models.

It’s also a case of manual or nothing, which is no bad thing considering the six-speed ‘box is an absolute peach to use. Vans used to be all about heavy clutches and awkward gearshifts, but driving the modern Transit is barely any different to piloting a manual SUV, albeit a very long one.

That said, this diesel unit is a bit noisy and gets particularly trashy as the revs climbs, where the power also runs a little dry. You’ll have to work the gearbox a bit if hustling the Transit Trail along a country road, but traction is great, even if steering feel is almost non-existent. 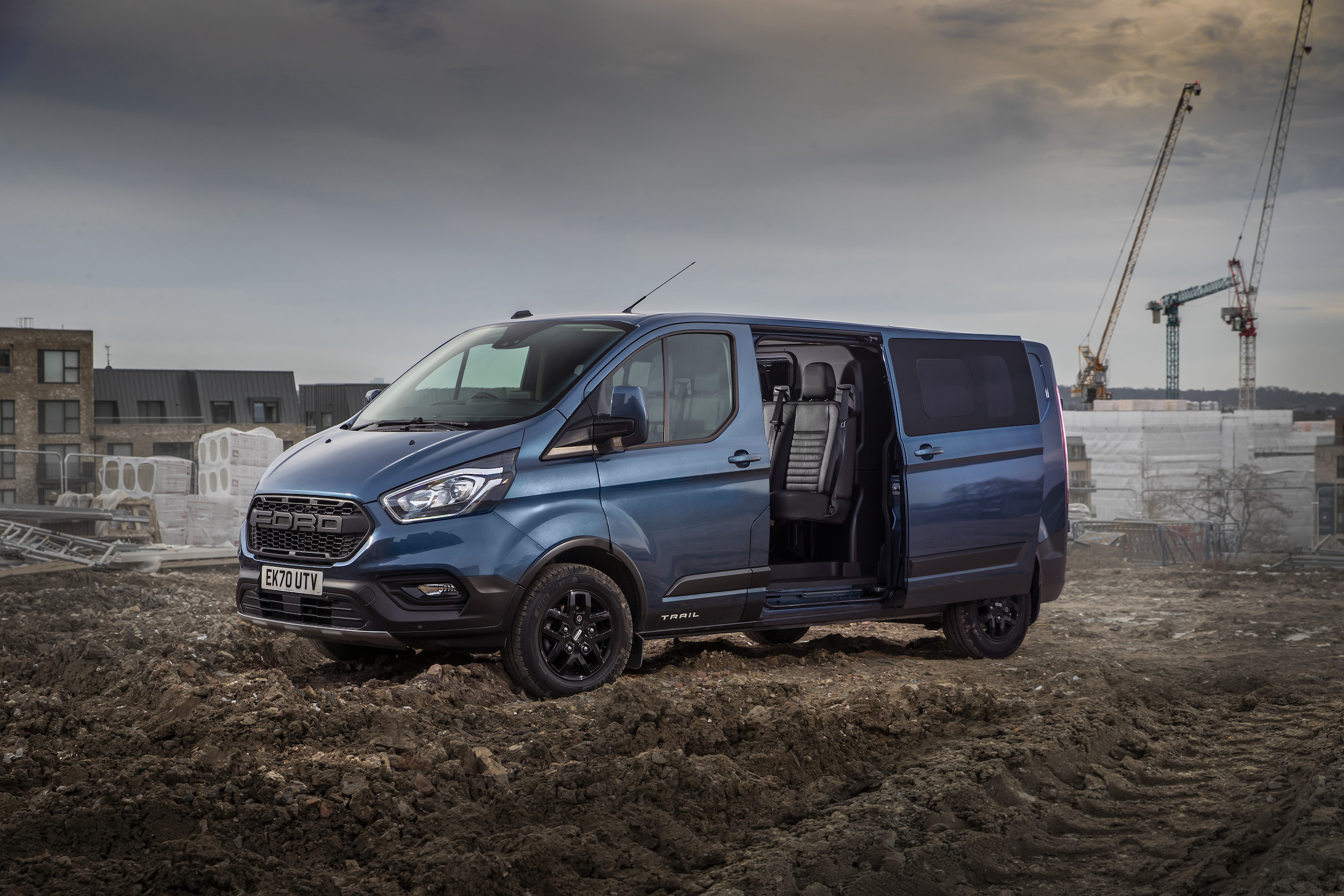 Ford claims you can achieve 35.8mpg on the combined cycle in this particularly specification, but with such a massive fuel tank, the big Ford feels like it will motor forever before it needs filling up. I drove the test model for an entire week, using a mix of motorway driving, B-roads and inner city trips and still handed it back with half a tank left.

It drives well for a commercial vehicle, proving that vans don’t necessarily mean crashing suspension and hollow interiors that act like an echo chamber for road noise and wind roar. The steering is light and exceptionally easy to use around town but lacks any kind of driver feedback. Barrelling into corners requires a fair amount of bravery, while the lane keep assist optioned on this model is frustrating.

A VW Transporter is by far a more engaging drive and the latest model rides exceptionally well on scarred UK road surfaces. This could be an issue for Ford, as a fully-specced Trail model starts to tickle the £40,000 mark, which is enough to buy a fairly well-specced VW T6.1 Kombi van. 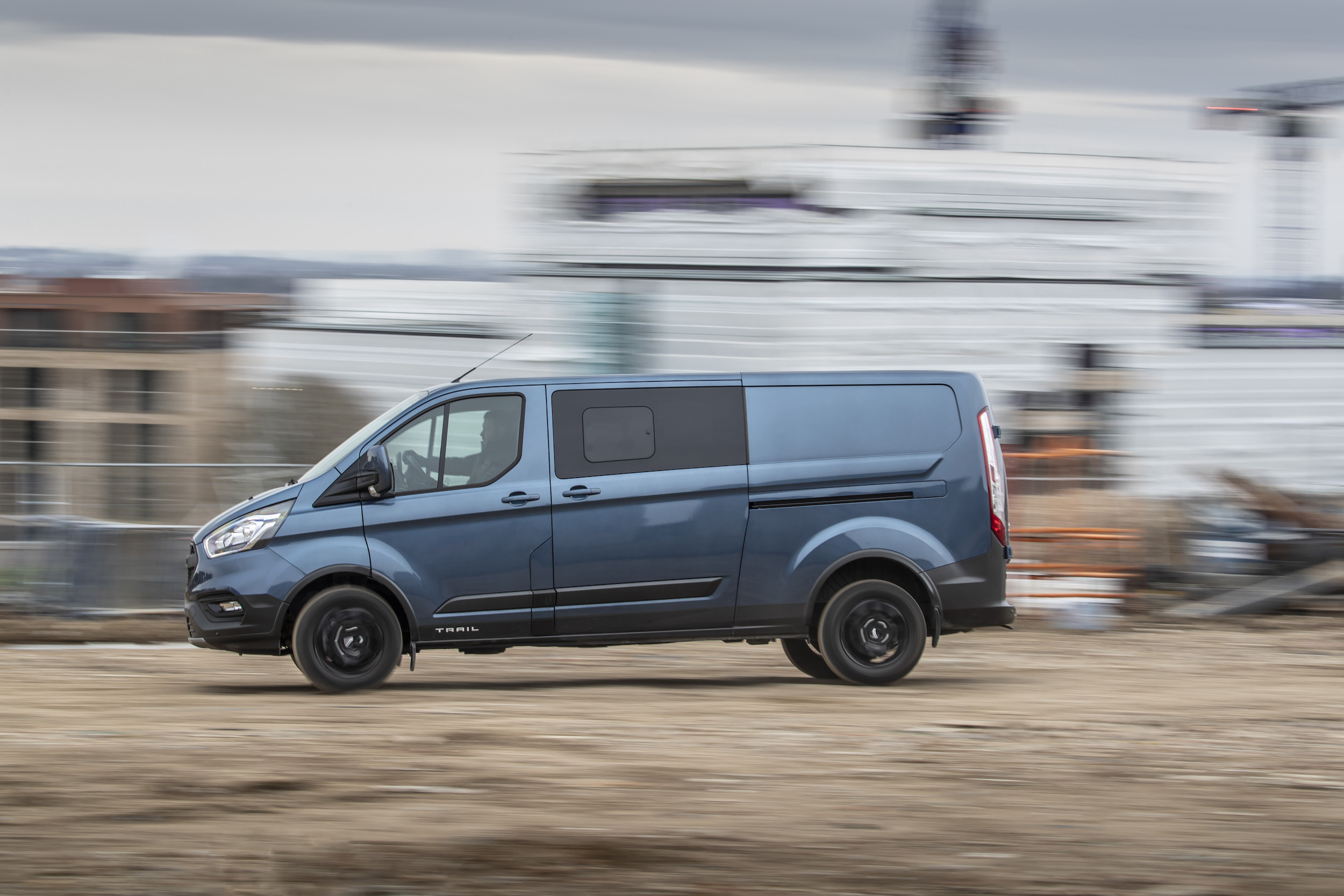 Without the chance to take it properly off-road, we can’t really comment on how well that Quaife diff copes with the muddy stuff, but point it towards a gravel lane or a lumpy forest car park and it grips well. The chunky tyres help matters and there’s enough suspension travel to soak up the big bumps. It’s not a full-fat exploration van, but it certainly looks the part.

We may be slightly biased as VW Transporter owners here, but the Vee Dub certainly feels more like a “driver’s van”, if there is such a thing. The Transit’s steering is nice and light but feels really vague because of that. It’s also not as quiet nor as refined inside the cabin as new Transporter, nor is it as luxurious as the inside of Merc’s latest Vito van. This Trail trim is clearly aimed at the lifestyle set and in that respect, it looks the business.

But with prices tickling the £40,000 mark for a fully kitted Transit Custom Trail, it feels quite expensive for some chunky tyres and a bit of leather inside. 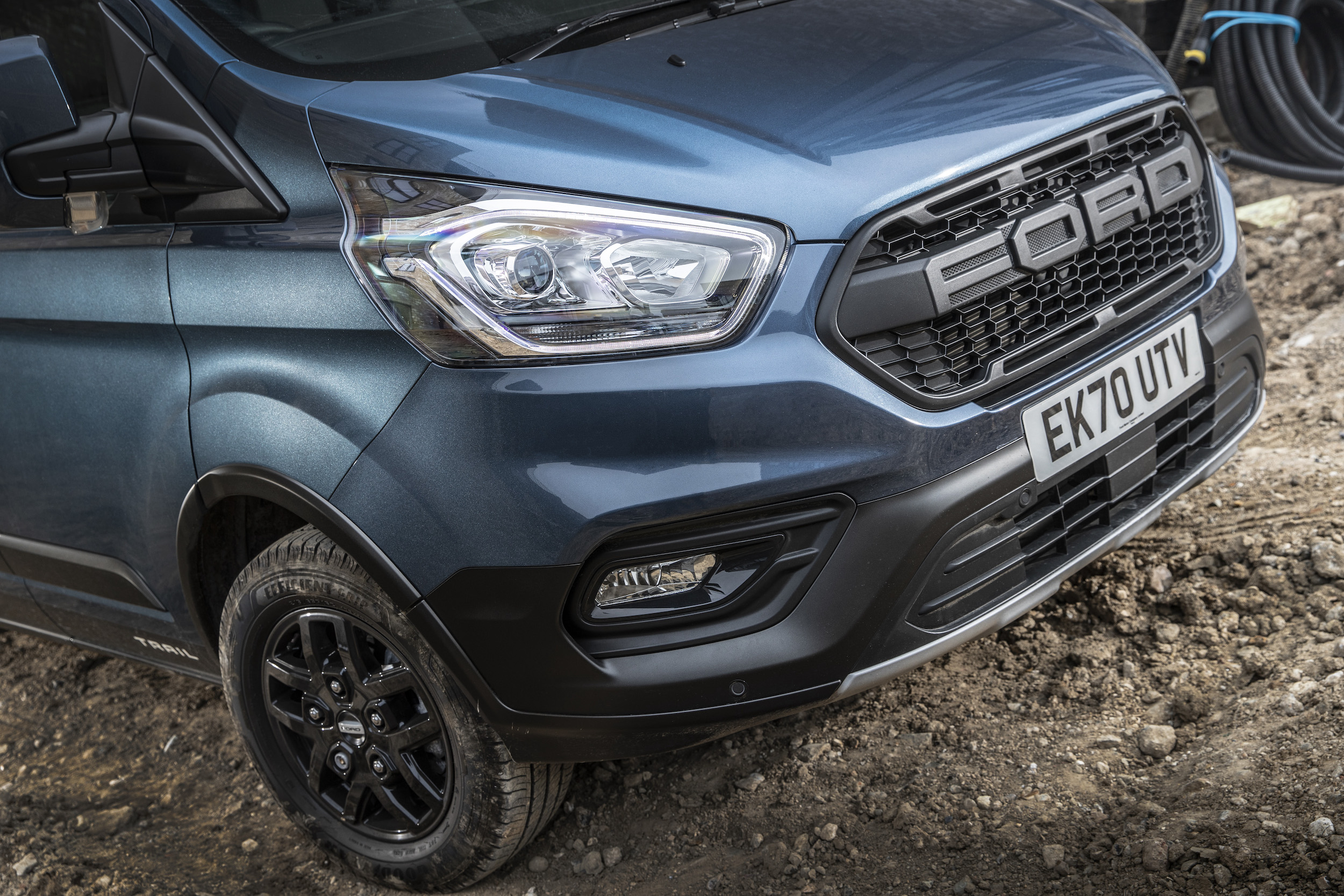