You only have to take a quick look around the Flat-Out Garage (ok, so it’s more of a shed) to realise that we are a little bit in love with Honda’s CB badge.

To us, those two letters will go down as some of the most important in motorcycling history, with the 125cc Honda Benly Super Sport ushering in an era of fast, affordable and reliable sports bikes during an age of often unreliable, heavy and expensive British and American offerings.

The CB400 Four, which we have owned and adored, the original CB750 and the CB900F are often considered among the best four-cylinder, air-cooled engines ever made, so it only seems right that Honda’s young engineers were pointed towards these very bikes when designing the new CB1100 RS. 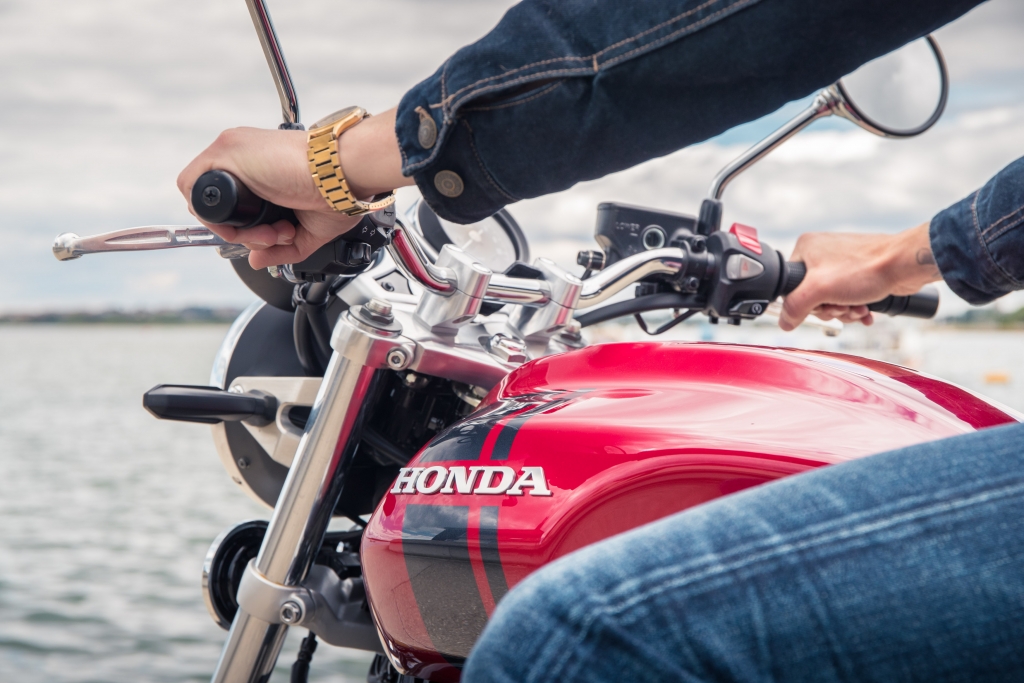 Available in either a cruisy EX model or a more aggressive, sportier RS version, the bike features an all-new, 1140cc, 16v, DOHC, air-cooled engine that kicks out 88hp and 91Nm of torque.

These are perhaps not the most mind-blowing performance stats – considering even Honda’s own Fireblade requires fewer CCs to melt faces – but the manner in which this brilliantly retro-modern powerplant delivers its grunt is sublime.

Firstly, the throttle feels buttery smooth and linear, while a new slipper clutch, which uses an integrated freewheel mechanism to reduce the effects of engine braking when decelerating, means there are no nasty surprises when throttling off. 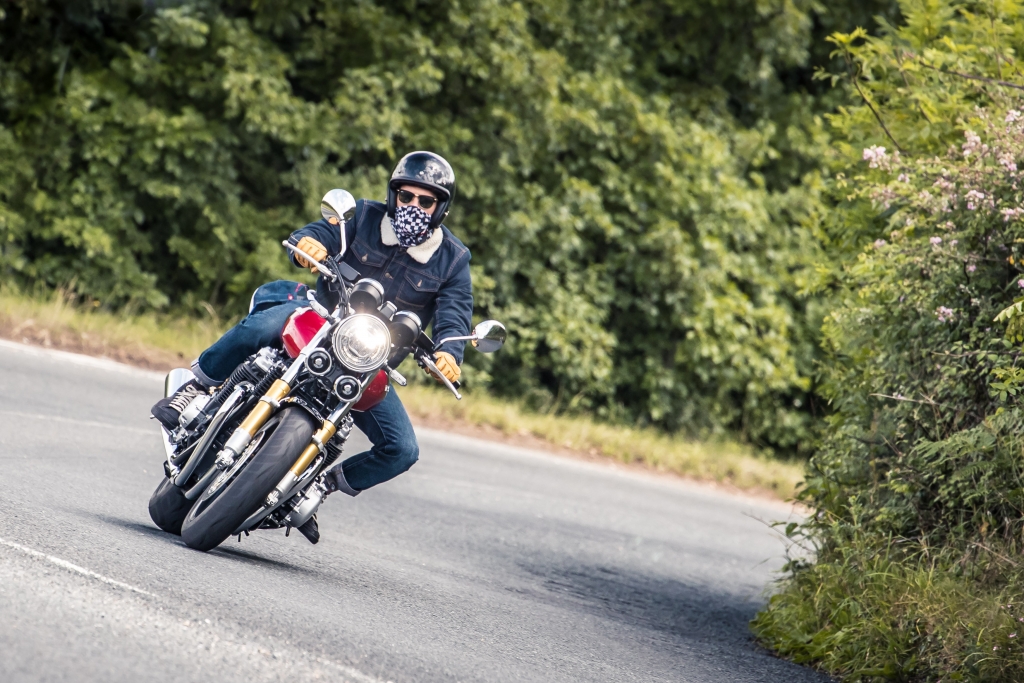 In short, acceleration and deceleration is brilliantly judged and makes riding this thing feel so easy and comfortable. Throw a leg over for the first time and it only takes a few seconds to feel comfortable behind the bars.

However, it rarely feels contorted and long distances aren’t out of the question, despite the lack of front screen or fairing, while its low seat height and great weight distribution means it’s extremely easy to wrangle around town for a relatively large bike. 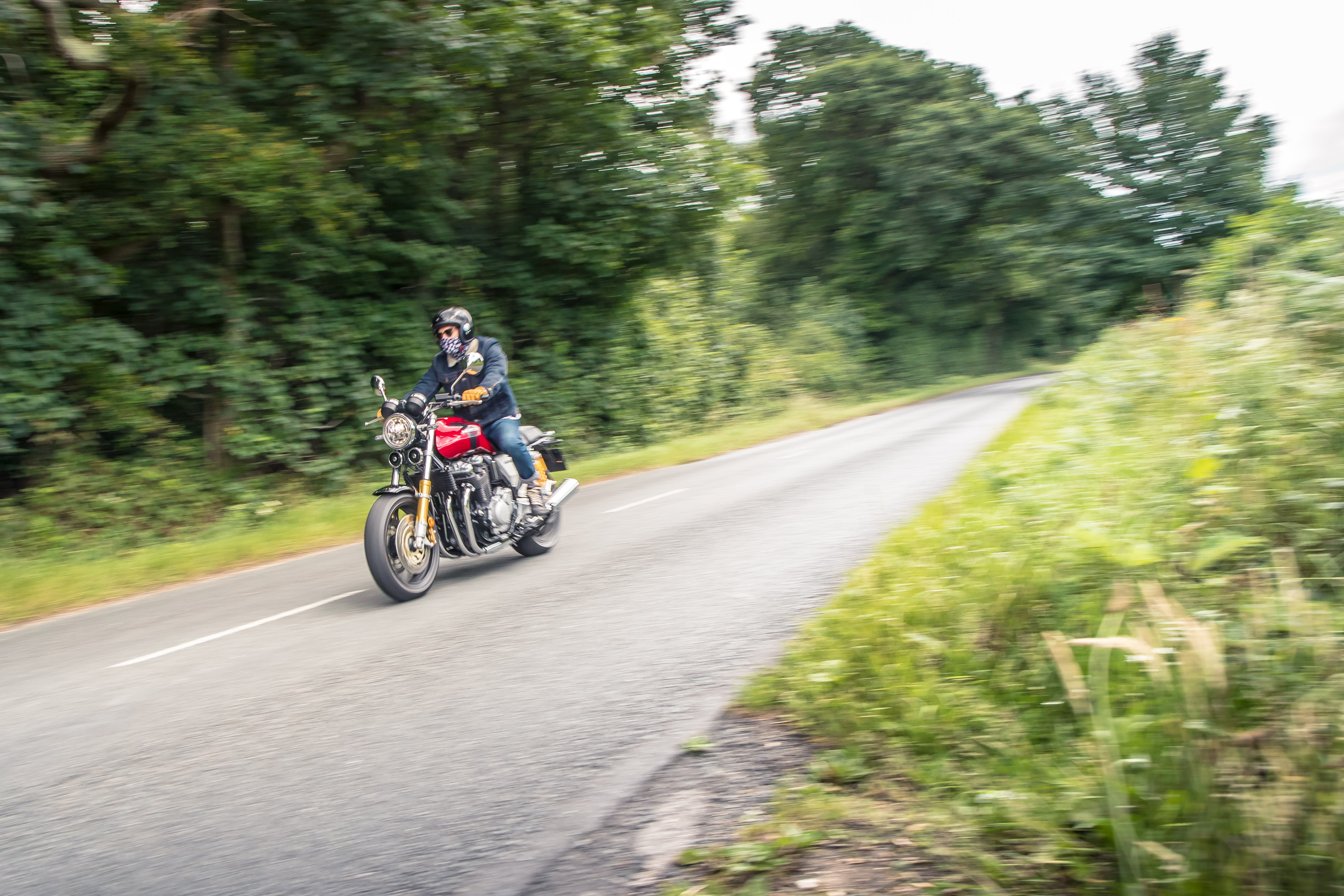 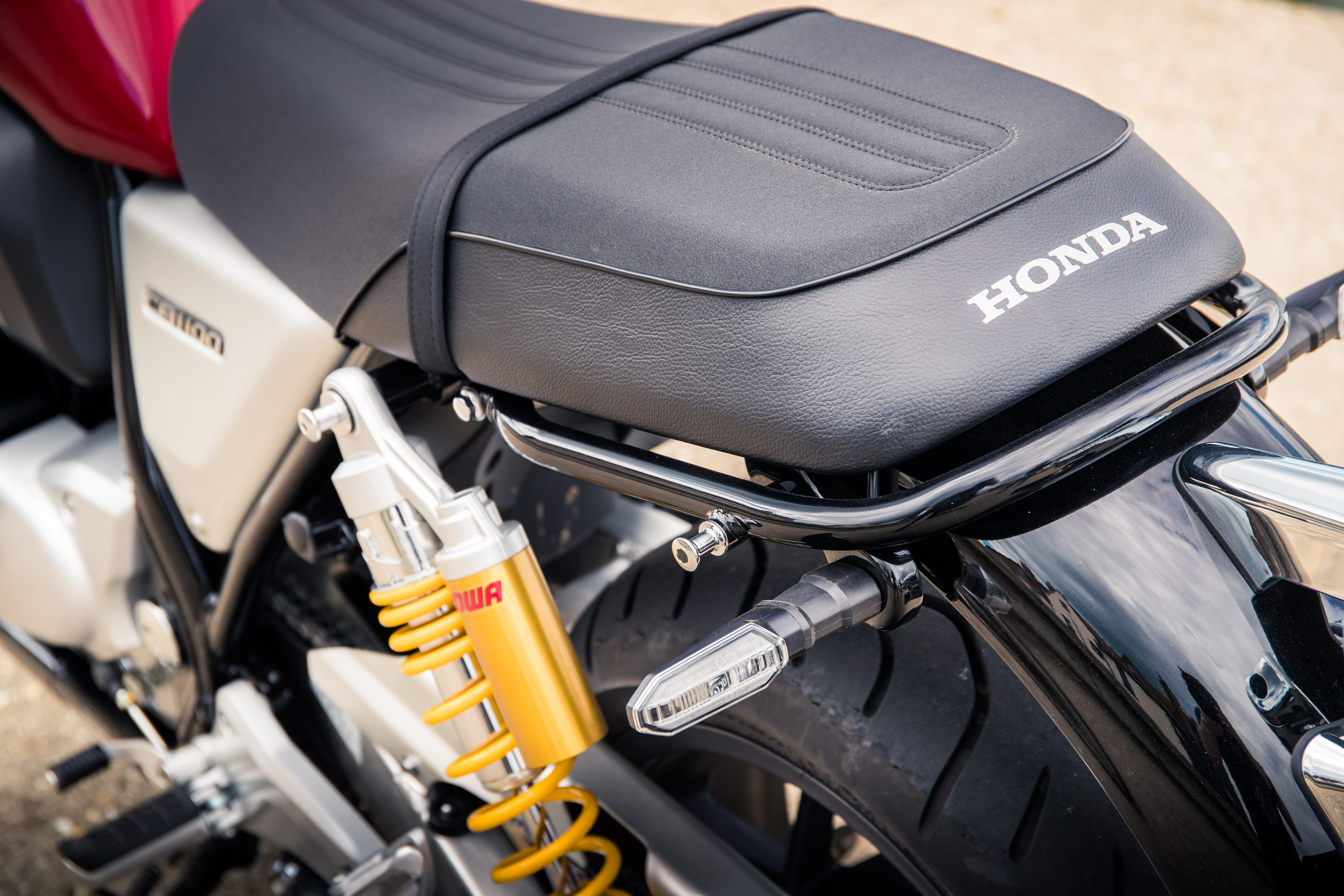 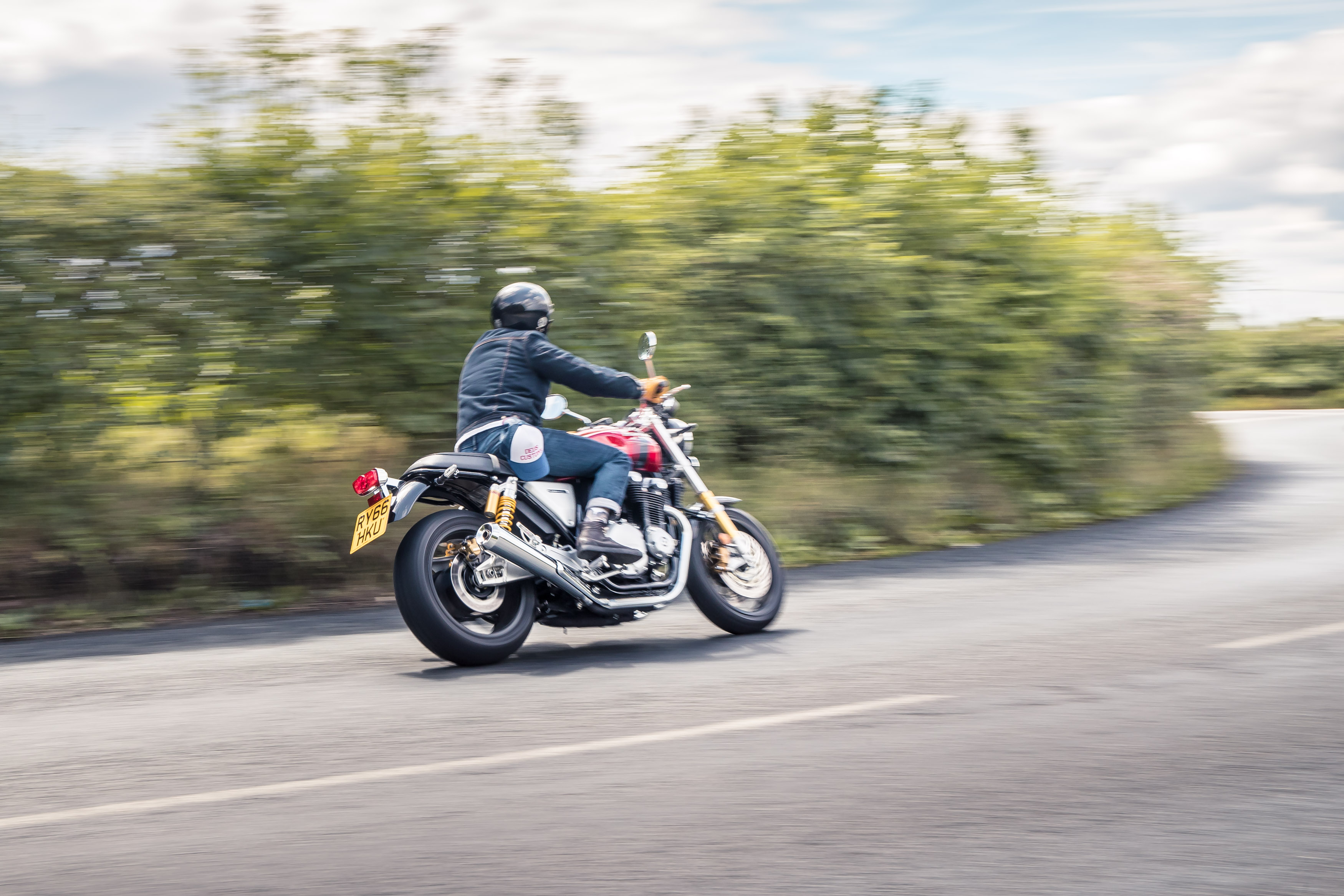 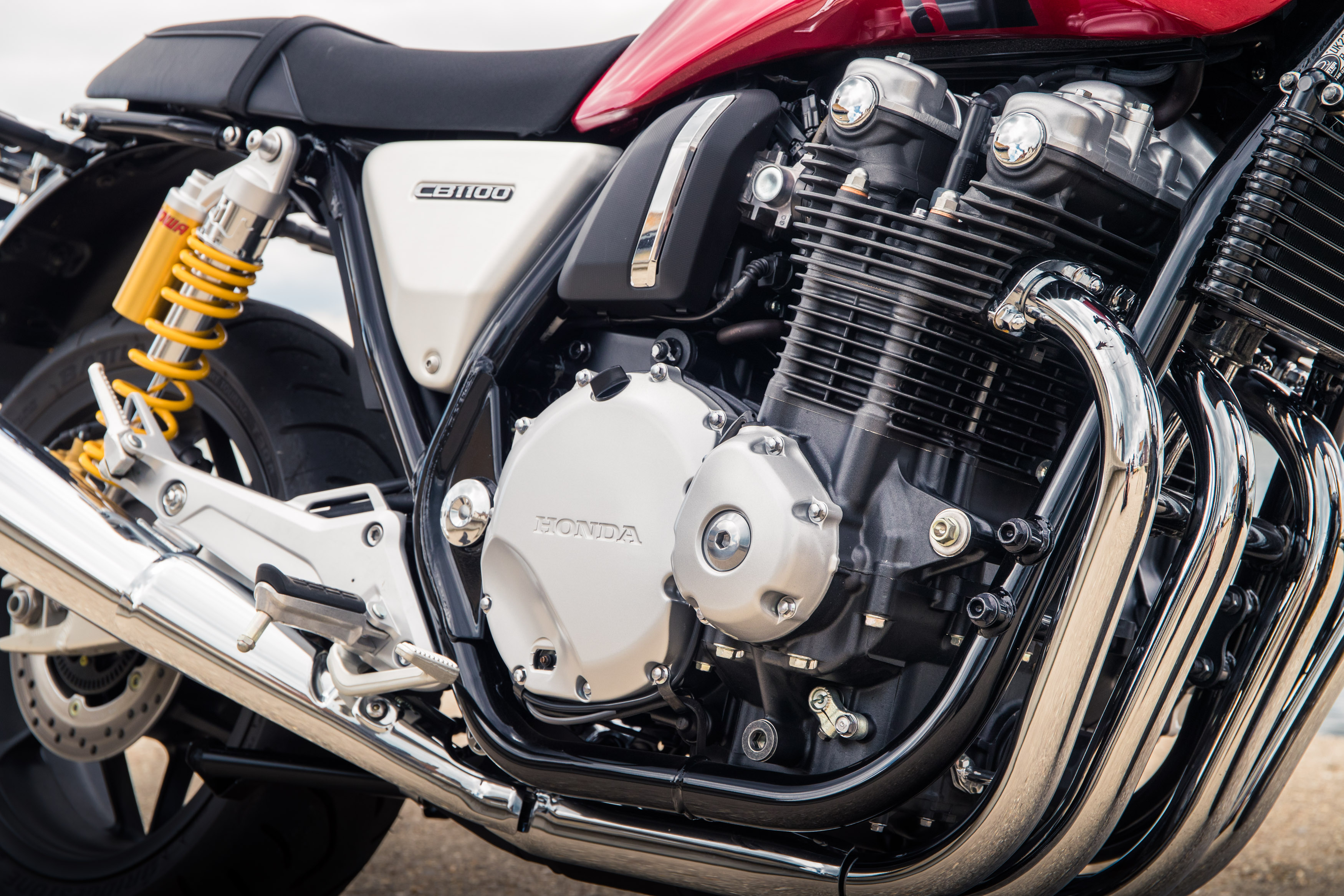 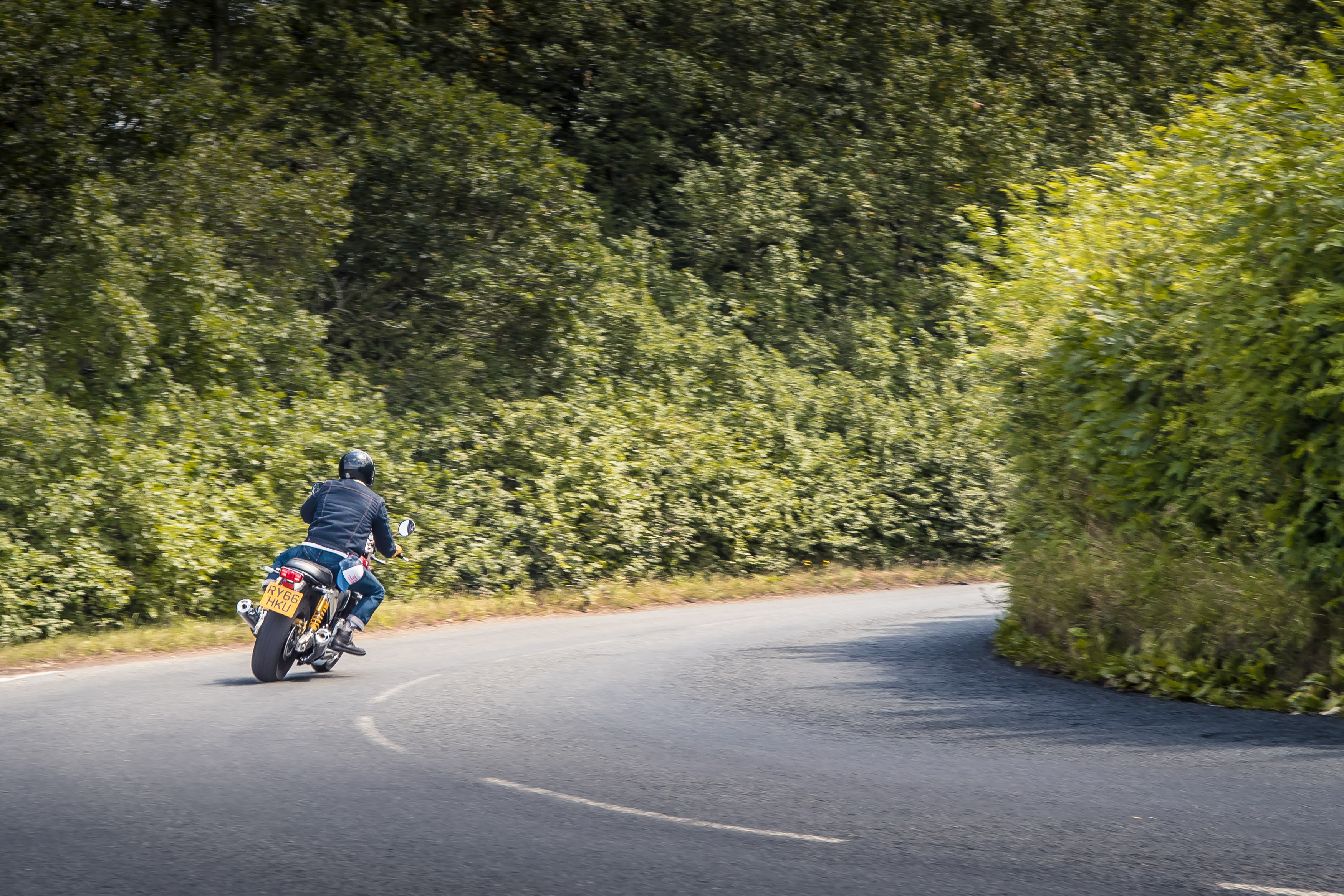 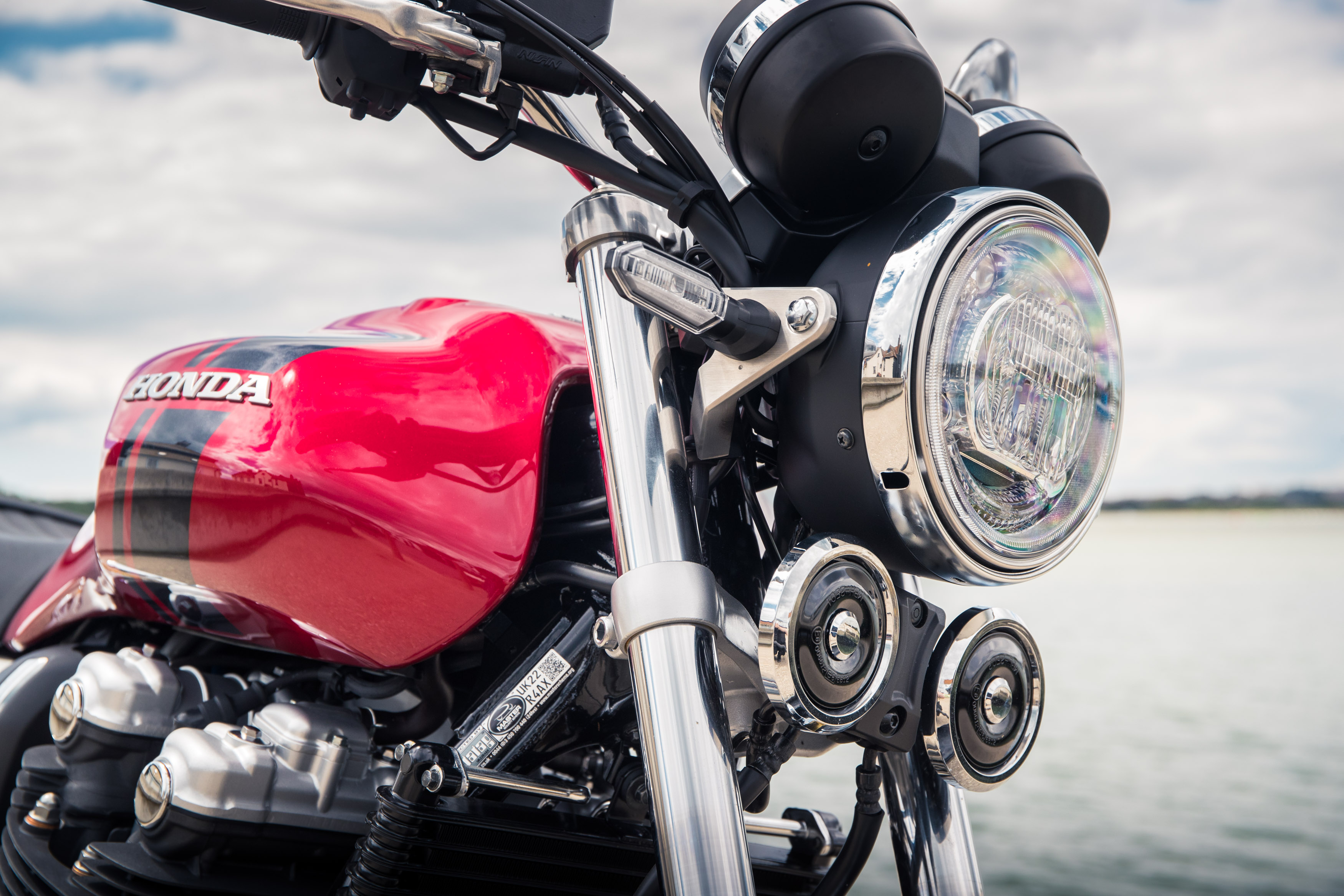 There is also plenty of torque to avoid awkward gear juggling when overtaking, even with the addition of a new, cruise-friendly six-speed box, while that slightly sportier seating position means it feels stable and secure at the top end of the speedometer.

The steering is comfortable, if not the sharpest around, and it will take some balls to get this thing really leaning, but that’s not what it’s all about. The ABS system, which comes as standard, inspires confidence, as does the well-judged suspension system. This bike was built for sunny evening pub meet-ups, rather than track days, and that’s cool with us.

Beauty may be in the eye of the beholder but we think the Honda CB1100 RS is a handsome brute and one that plays on Japanese marque’s history while throwing in plenty of modern touches to bring it bang up to date. 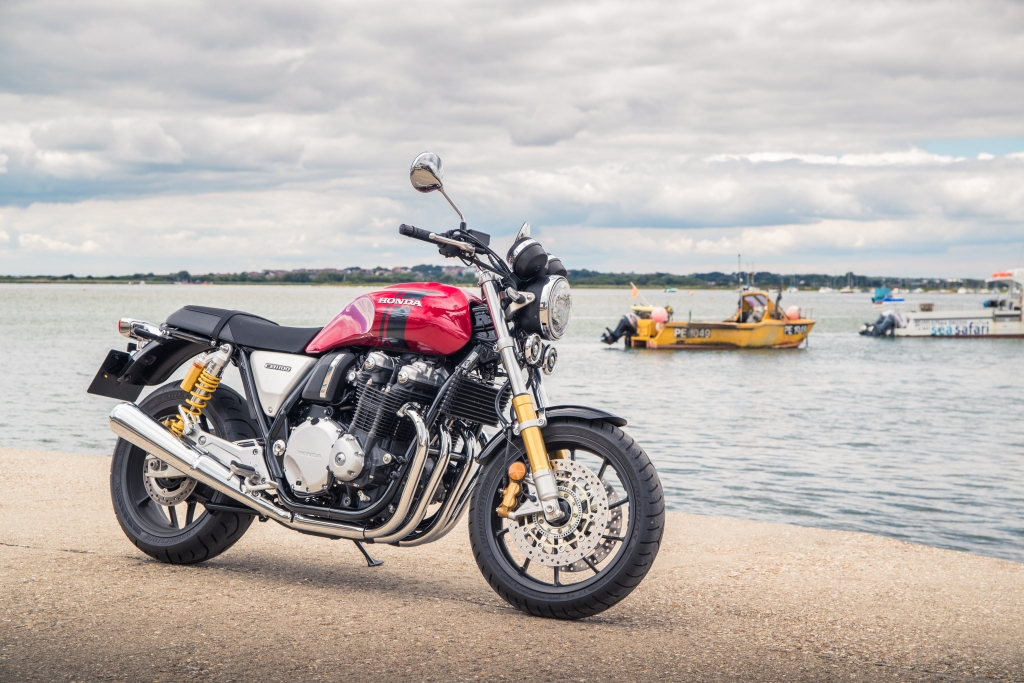 Arguably not as nostalgic as Triumph’s T120, or as ‘shouty’ as BMW’s R nineT range, the humble Honda demands respect from passers-by with its meaty DOHC Inline Four engine, which aggressively bursts out of the frame via an unmistakable four-into-two exhaust system.

The gloriously shapely tank, which is made without seam welds for a smoother aesthetic, adds further muscle to the front end and channels the eyes towards a set of retro clocks.

But Honda, being the engineering obsessives, manages to throw in a plethora of modern touches to compliment the throwback styling. 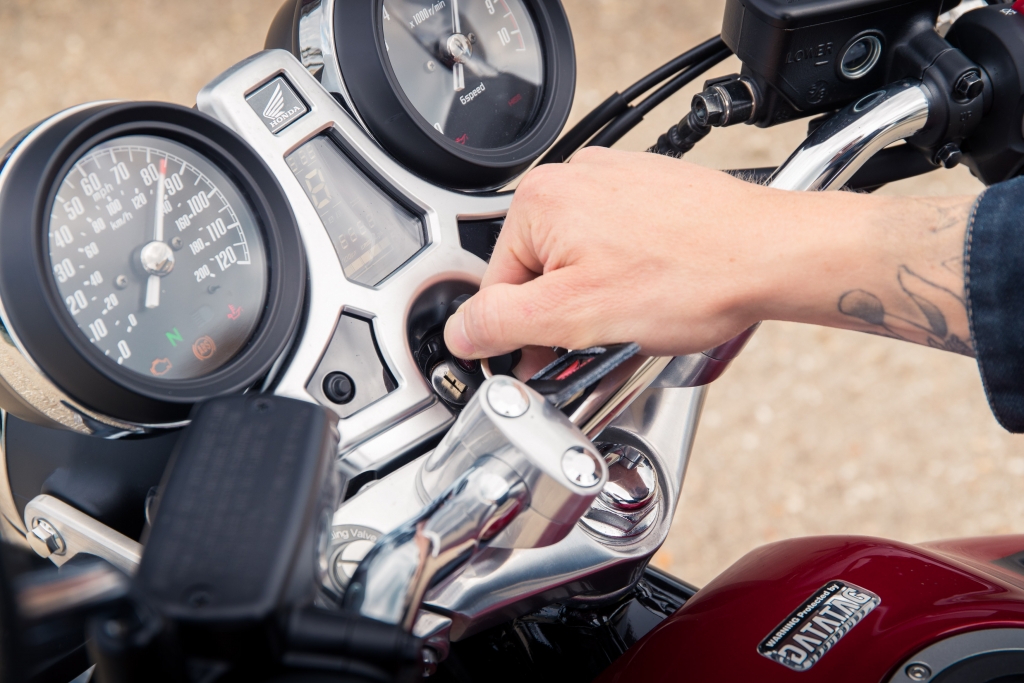 Those cool analogue instrument binnacles are accompanied by a handy digital fuel gauge, trip meter and a piercing LED front lamp, while that shapely period tank manages to stash 16.8-litres of fuel inside.

The twin pipes, although no way near loud enough for us, dazzle in chrome and the stubby, slightly swept-back silencers give this RS version a nice, aggressive look. Agreed, we’d immediately swap them out for something angrier (the rear light would also have to go) but the soundtrack is deep and thrummy, if not attention-grabbing.

Finally, the piercing Candy Prominence Red paintjob and contrast gold shocks add an eye-catching cherry to the top of a very delicious cake. 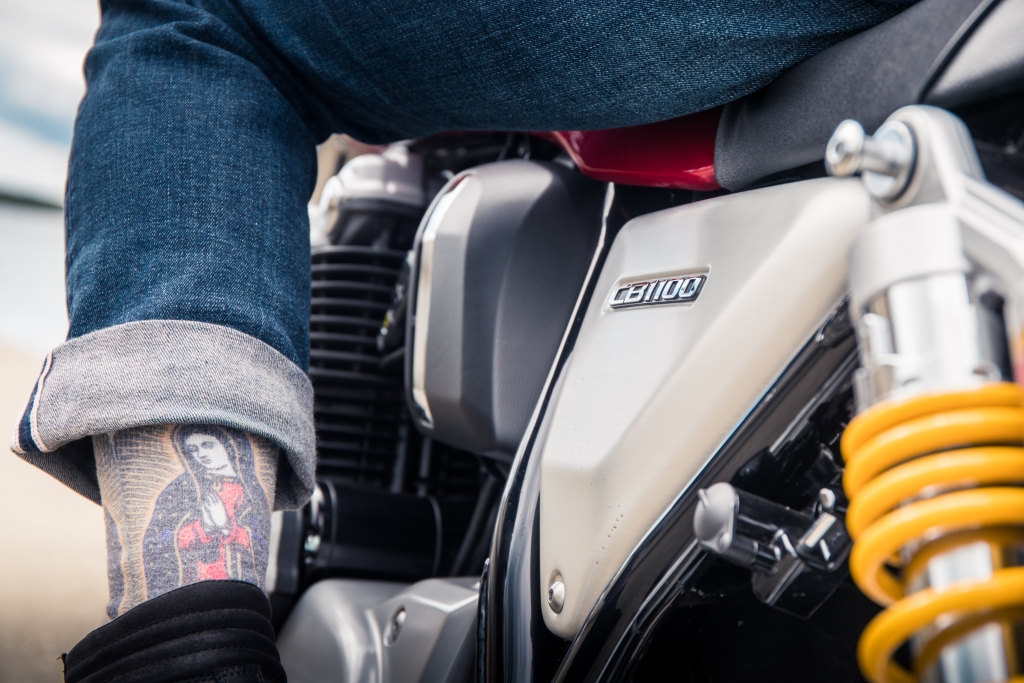 It all feels extremely well bolted together and solid too, with even the smallest additional flourishes seemingly featuring the same engineering fascination that goes into Honda’s products.

At £11,139, the handsome and impeccably finished CB1100 RS looks a veritable bargain next to basic BMW RNineT or Triumph Thruxton rivals, while the smaller and cheaper Ducati Scrambler range can’t really match the muscle.

But more importantly, the bike successfully scratches that classic bike itch without the pain associated with owning a vintage machine.

Ok, so it’s not the sportiest ride around but this RS version manages to offer a big dose of cafe racer cool without the pains of old machinery ownership, nor the uncomfortable riding position of a stripped-back speed machine. 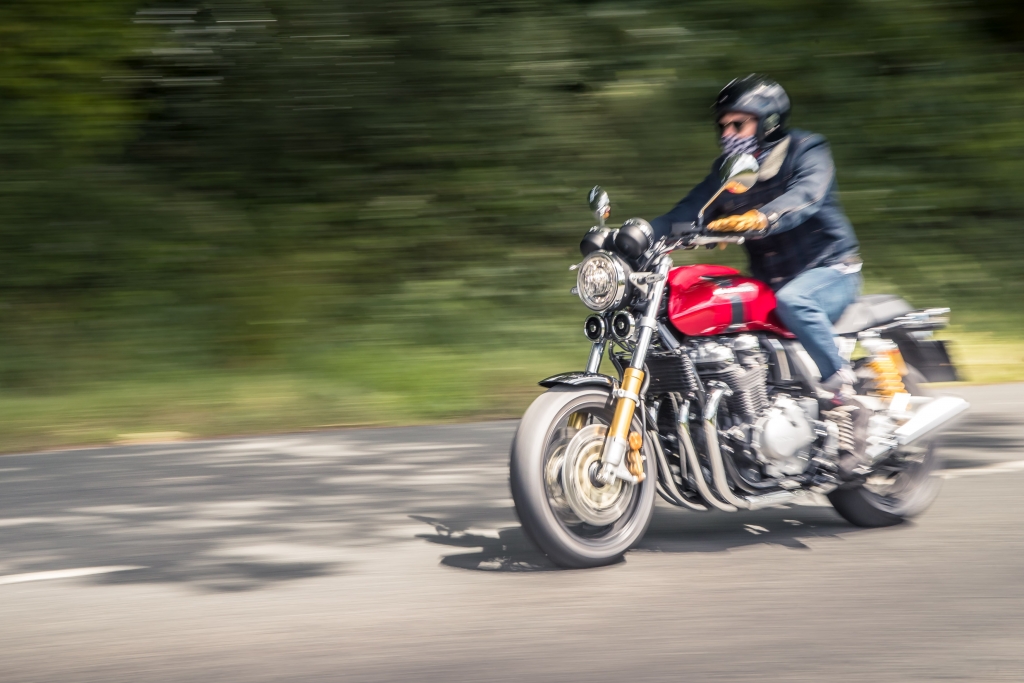 Alas, it seems likely that the aforementioned names are going to continue to boss the neo-retro bike game, perhaps because Honda doesn’t seem too interested in aligning itself with the hippest brands and underground events.

And that’s a shame, because this bike has got all the makings of the classic CBs we know and love.

Find out more at Honda Motorcycles. 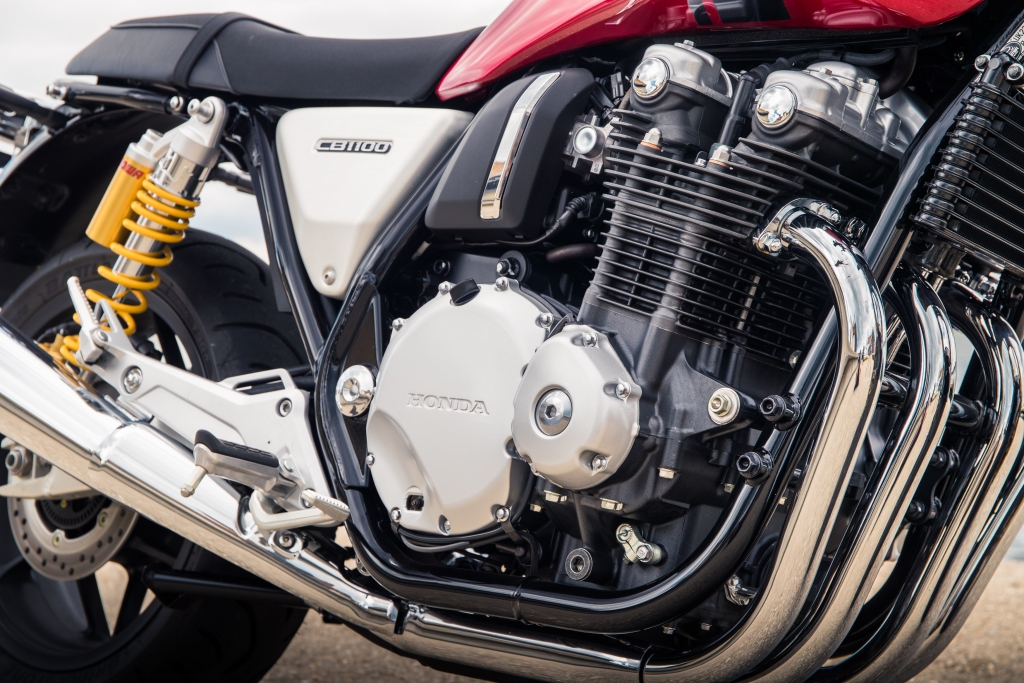