When embarking on the arduous task of setting up Flat-Out Magazine, we never thought we’d see the day that a Ford Transit van would grace these premium pages.

But before you accuse us of being snooty, elitist or ignoring the vehicle that arguably keeps this nation running, we’d like to point out that traditionally, the Transit van has been about as sexy as a sea bass in stockings. 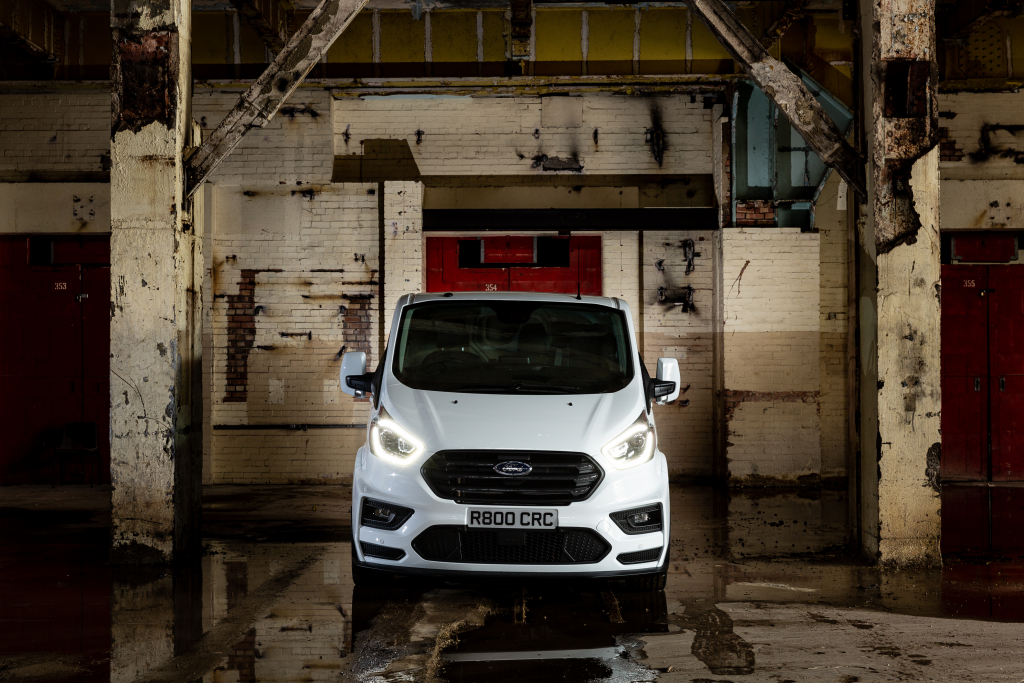 Admit it. Have you ever double-tapped on an image of a bog standard commercial vehicle while aimlessly trawling through Instagram? No, we didn’t think so.

However, the MS-RT Transit Custom deserves to have influencers tapping in a frenzy, as it’s one of the coolest CV treatments we’ve seen this side of a fully pimped-out VW Transporter.

One of the most frequent questions the chaps over at MS-RT (which stands for Motorsport Road Technology) get asked is, “how many extra horses have you managed to liberate from Ford’s diesel engine?” 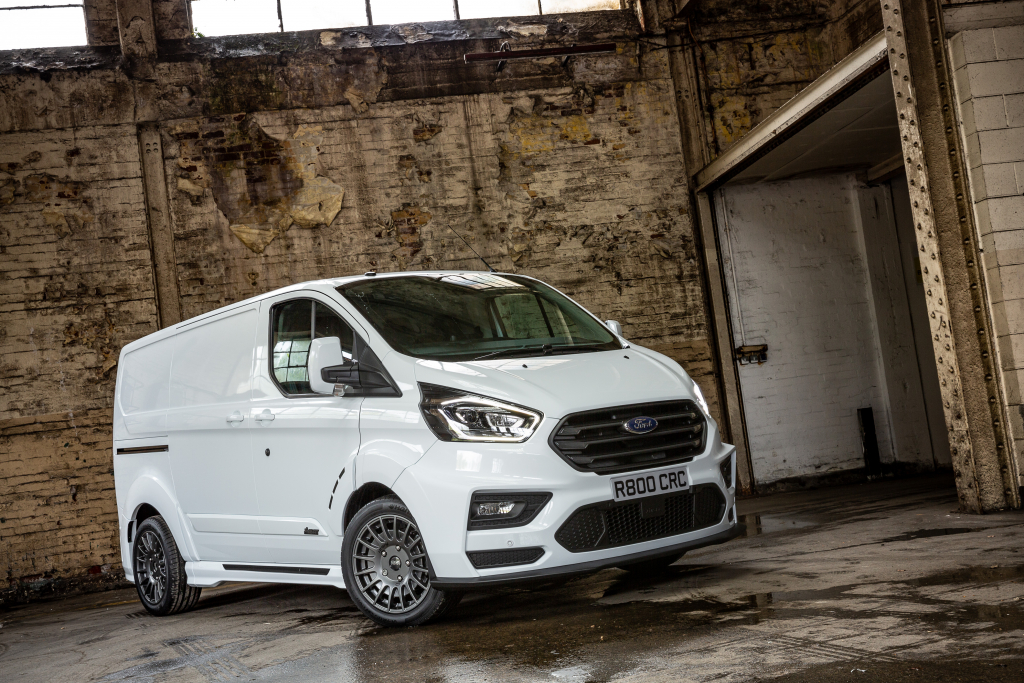 The short answer here is “none”, because despite being linked to the M-Sport Ford rally outfit, the Gwent team isn’t in the business of ensuring builders get to the site in record time, rather guaranteeing the individual that owns the building firm looks better than any of his or her employees.

“We would love a bit of extra power but purely as a styling exercise, MS-RT has nailed the brief”

Of course, if you ask really nice the team can point you in the direction of some additional grunt but the sole purpose is making stuff look cool and its efforts on Ford’s Ranger pick-up truck and smaller Transit Connect are simply excellent. 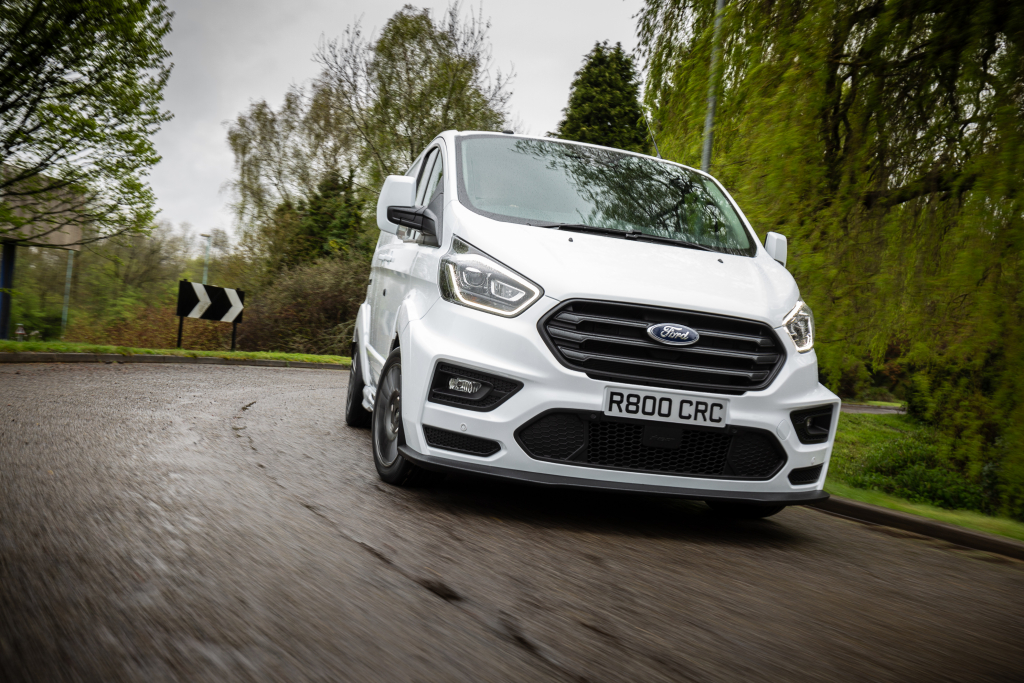 However, some will regard MS-RT’s latest efforts as a glorified body kit for an already relatively attractive van (the latest generation Transit is by far the most handsome yet) but it goes beyond that.

A quick tour of its Welsh facility revealed an unwavering attention to detail and manufacturing standards that are more likely to be found at something like Jaguar’s SVO department than your local car customisation outfit. 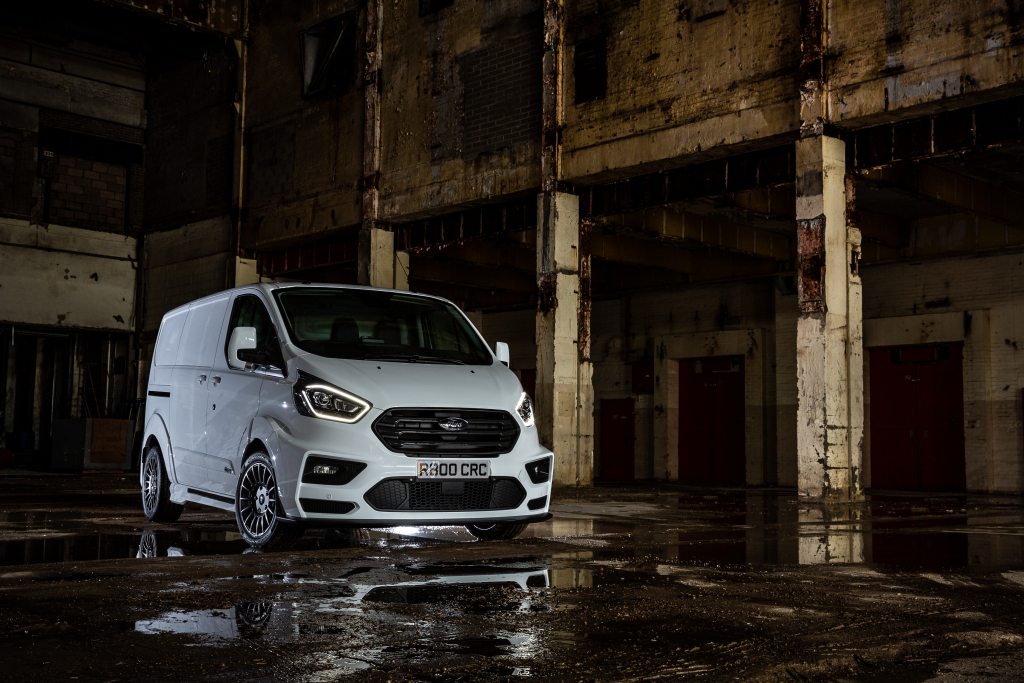 Yes, the MS-RT Transit Custom is essentially a styling exercise, rather than a full-blown racy overhaul, but it is executed well and the additional skirts, diffusers and rear wing manage to tread on the classy side of the taste spectrum.

The factory uses the latest injection moulding processes to make its complex shapes and then painstakingly covers everything in up to nine coats of paint.

There is rigorous quality control and every vehicle is painstakingly checked before it leaves the factory. We’d go as far as saying their painting process is better than Ford factory standard, as it’s all carried out by humans. 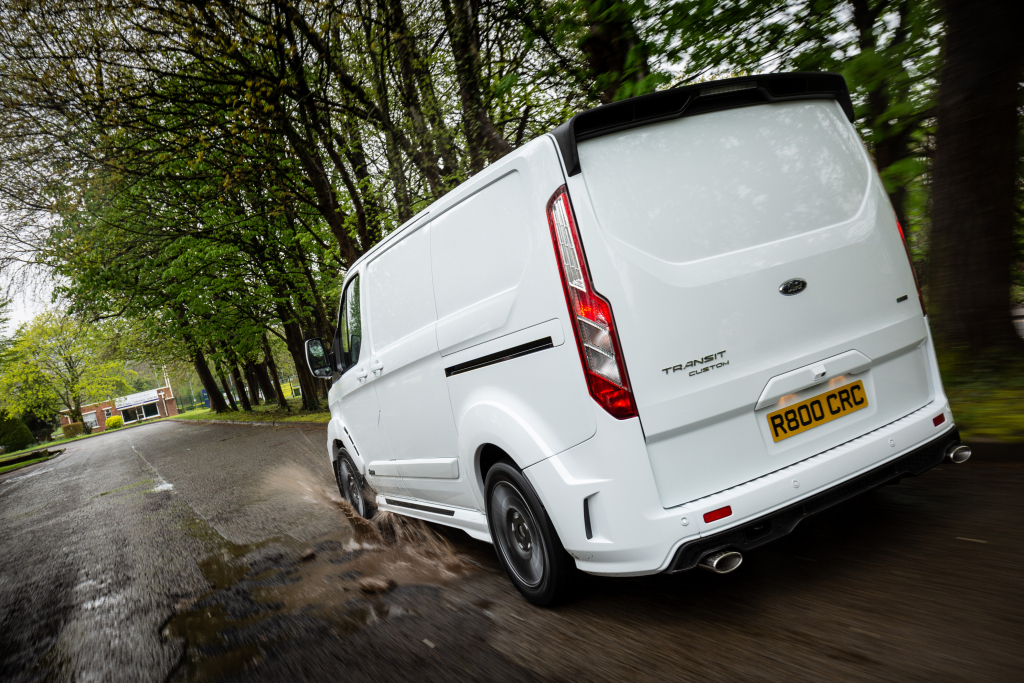 Even the custom exhaust system is meticulously shaped on site and the neat oval end cans have been designed and manufactured to the highest standards.

Inside, MS-RT will apply all manner of hand-stitched nappa leather, Alcantara, suede and other fabrics for that bespoke touch, while a unique sporty steering wheel with carbon inlays replaces the standard Ford unit.

There’s an impressive array of OZ alloy wheel options, shod in 103 XL load-rated Hankook Ventus S1 evo2 tyres, which tickle the heady heights of 21-inches in their most gargantuan form, as well as discreet MS-RT badging throughout. 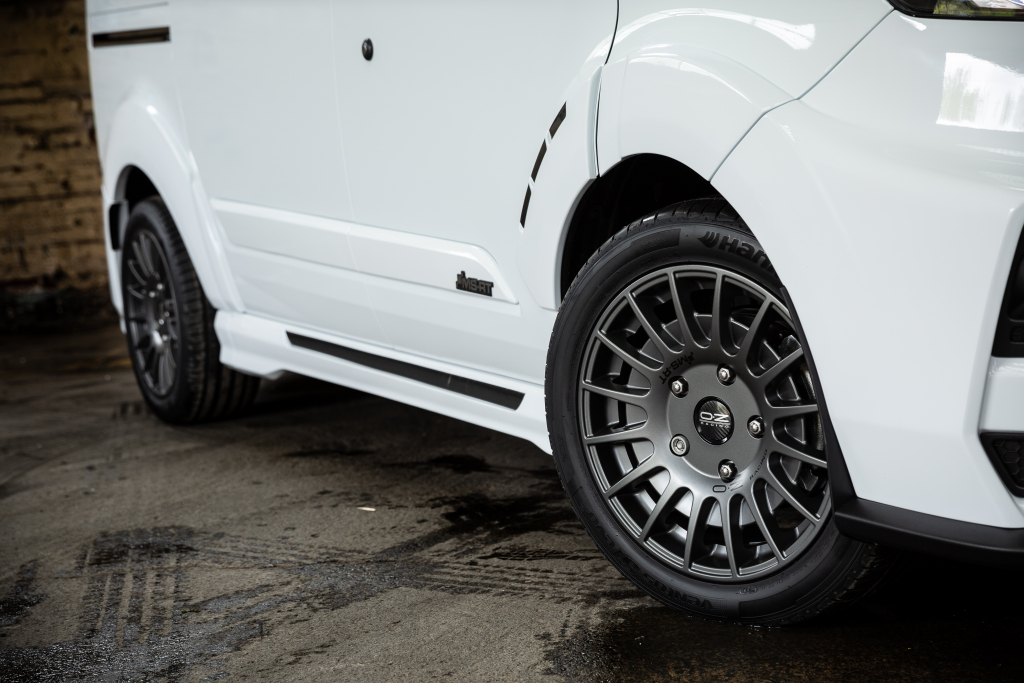 The body-kitted and be-winged look won’t be for everyone but the burgeoning brand already has a loyal following that includes the likes of Guy Martin, a raft of professional mountain bikers and those looking to haul motorcycles and other lifestyle additions in style.

It seems a shame MS-RT hasn’t done anything to give the big beast a little more power but Ford has a strict policy on what aftermarket firms can and can’t do with their vehicles.

As a result, the Welsh outfit has turned its attention to the rear suspension, where it has added Eibach performance lowering springs to give the MS-RT Transit Custom a more pliant ride when un-laden or partially loaded, while the overall ride height has been dropped to give it a more menacing look. 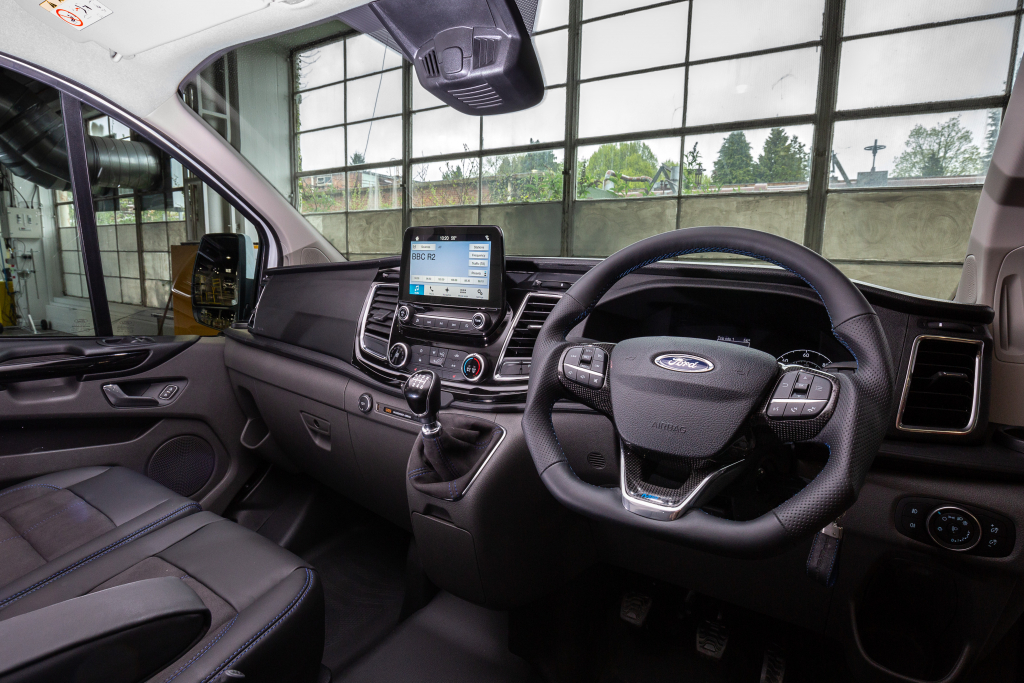 Ford already produces an extremely comfortable, practical and capable van in this latest generation Transit and the recipe is largely unchanged here.

The 170hp EcoBlue 2.0 litre TDCi engine develops 405Nm of torque for speedy overtakes, the steering is light but offers at least some feedback and the ride is excellent for a commercial vehicle.

Inside, Ford’s latest Sync3 infotainment system takes care of the navigation and tunes, with the option to easily tether a smartphone and make the most of a variety of apps. 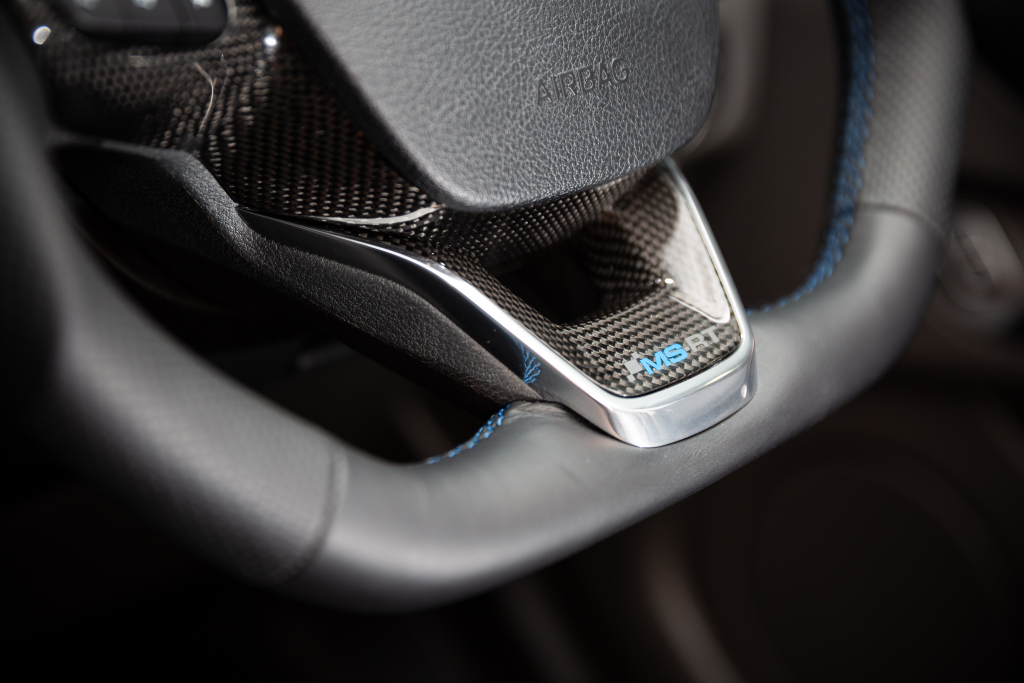 Perched up high on the plush leather seating, it’s easy to forget you are piloting a commercial vehicle and the MS-RT steering wheel feels chunky enough to transport the mind even further away from its workhorse background.

However, it’s still a van, and the diesel engine makes itself heard under hard acceleration, it can be hard to place in corners and despite the firmer springs and lower suspension, there’s still a fair amount of body roll. 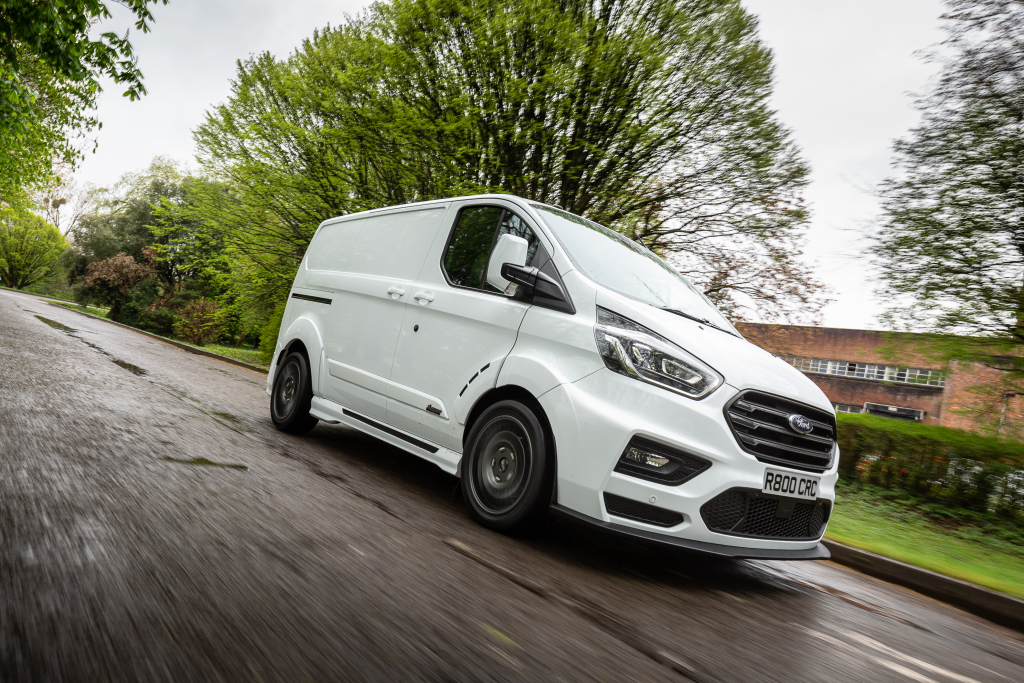 But it’s a van. And that’s to be expected.

It appears there is a healthy demand for unique creations that go above and beyond what Ford already offers with its range of accessories and now famous Sport Van trim line.

But the additional £3k over a new Transit Custom panel van (so long as you are buying as a private customer) is purely pumped into the aesthetic touches when it comes to MS-RT’s latest offering. 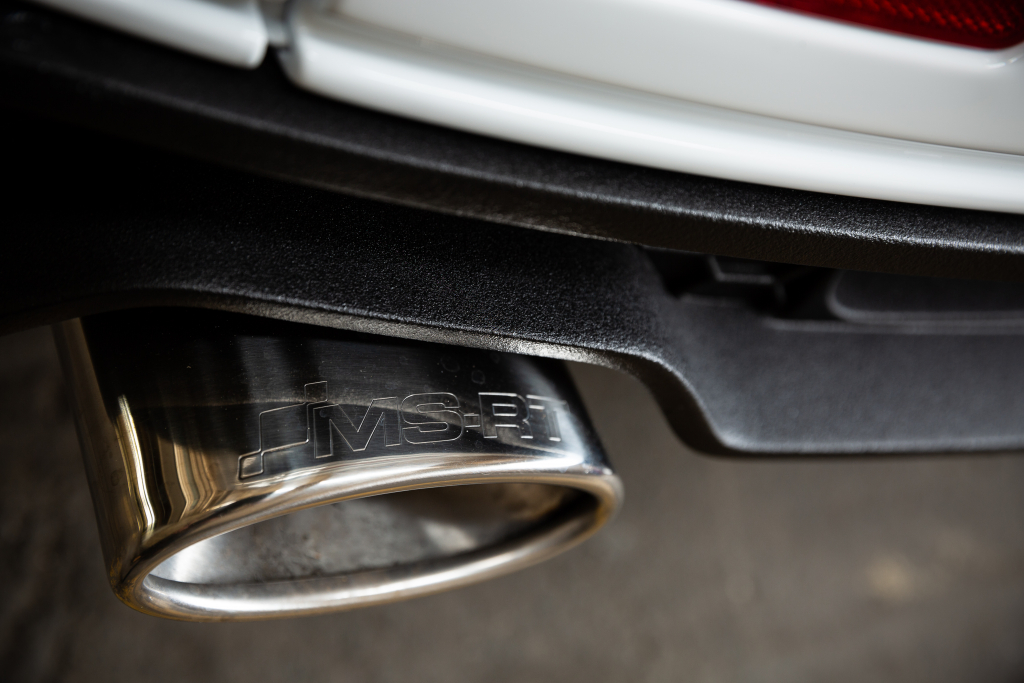 As a result, you’ll have fall head over heels with the looks to justify the extra expense, but that’s no bad thing.

“Traditionally, the Transit van has been about as sexy as a sea bass in stockings”

MS-RT says that its creations are currently sold through select Ford Vans dealerships across the UK, while the original manufacturer warranties and guarantees remain valid.

The same can’t be said for your VW Transporter if you start messing around with its underpinnings, which is part of the reason why the guys have experienced a pleasing level of demand so far. 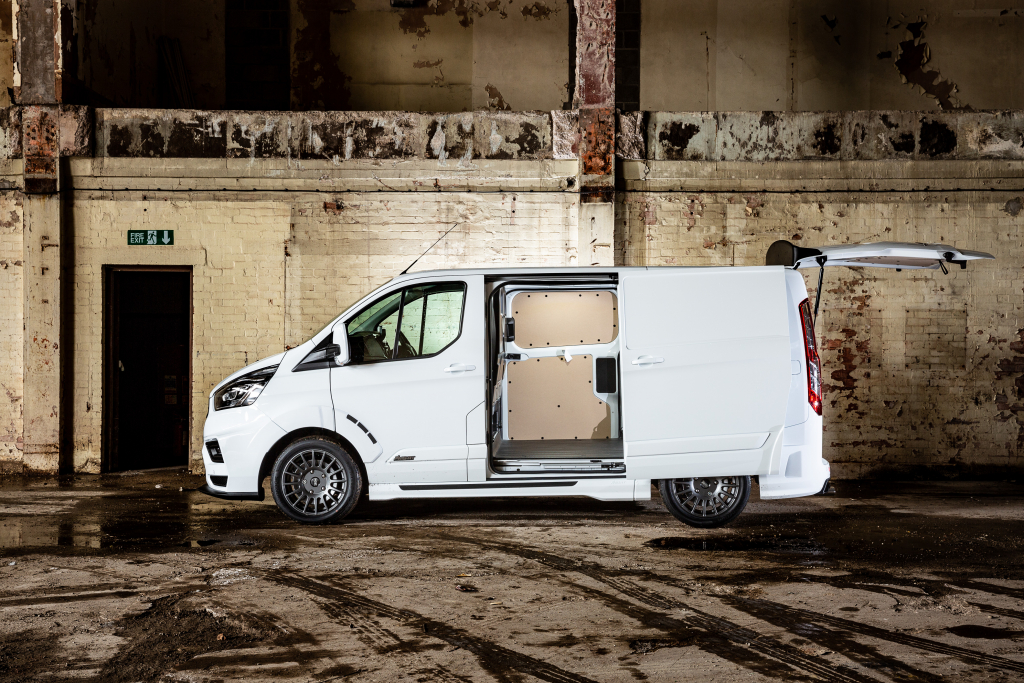 We would love a bit of extra power but purely as a styling exercise, MS-RT has nailed the brief and the additional outlay seems extremely reasonable now we’ve seen the care and attention lavished upon each vehicle.

Hit the link if you fancy finding out more.