We have a lot of friends and family that complain about our job here at Flat-Out, with most thinking we simply swan around the world, eating good food, sleeping in luxurious hotels and driving fancy cars.

That’s predominantly true, but we also attend plenty of industry events that require furious note taking, scholarly concentration and the occasional bout of physical violence in order to be at the front of the pack when the silk sheet is pulled from a new vehicle. 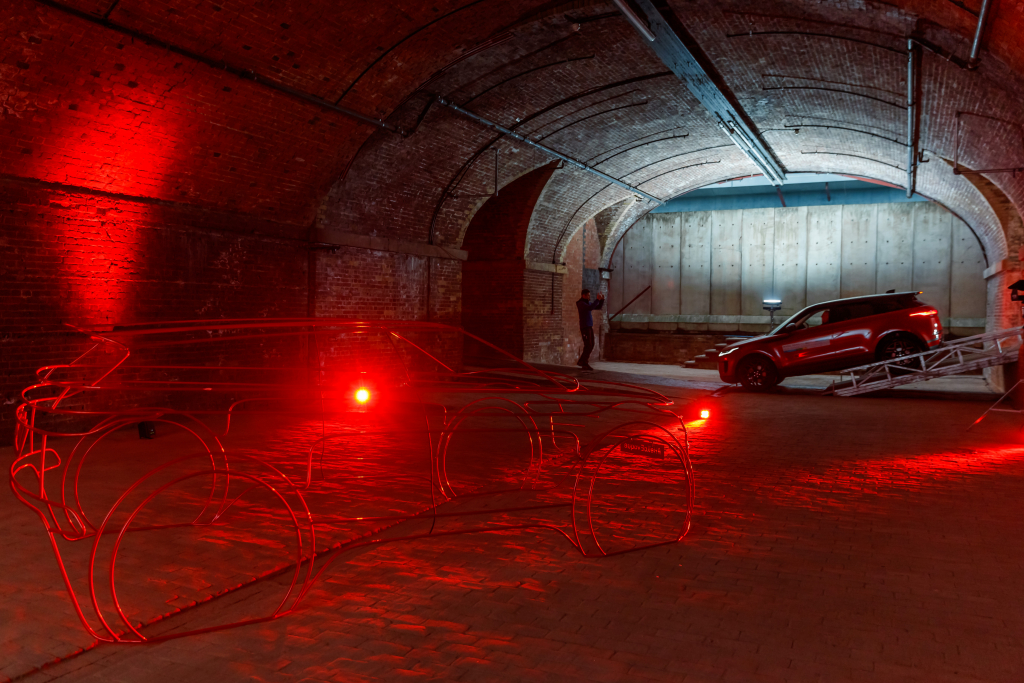 Range Rover’s global unveiling of its all-new Evoque model appeared to be an industry event not too dissimilar to what we previously described, with plenty of workshops and presentations from engineers and interior designers keen on explaining their vision. Thankfully, no violence.

“If the first Evoque was a smash hit, we have the feeling version 2.0 might just go platinum”

But things took a turn for the unexpected when the British marque tossed the keys to a pre-production model to yours truly and instructed us to tackle a sort of off-road gymkhana in the gloriously gritty surround of East London’s lost railway arches. 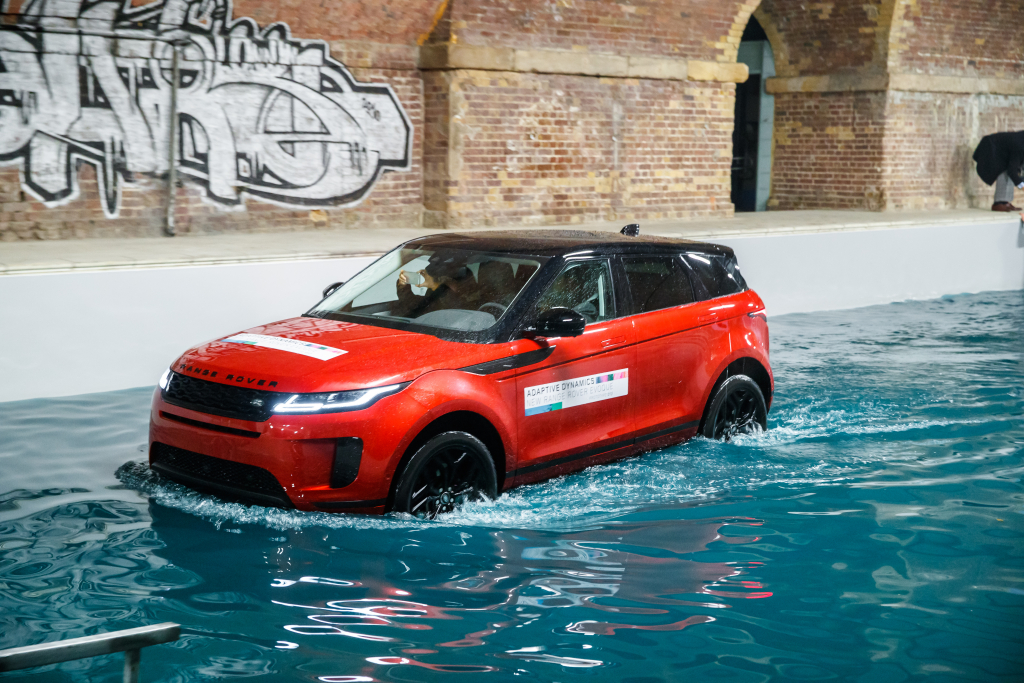 The vehicle in question featured Range Rover’s brand new mild hybrid system, which mates a 180hp diesel engine to a 48V battery system and electric motor, and although it might look similar to the outgoing model, it is completely new underneath. 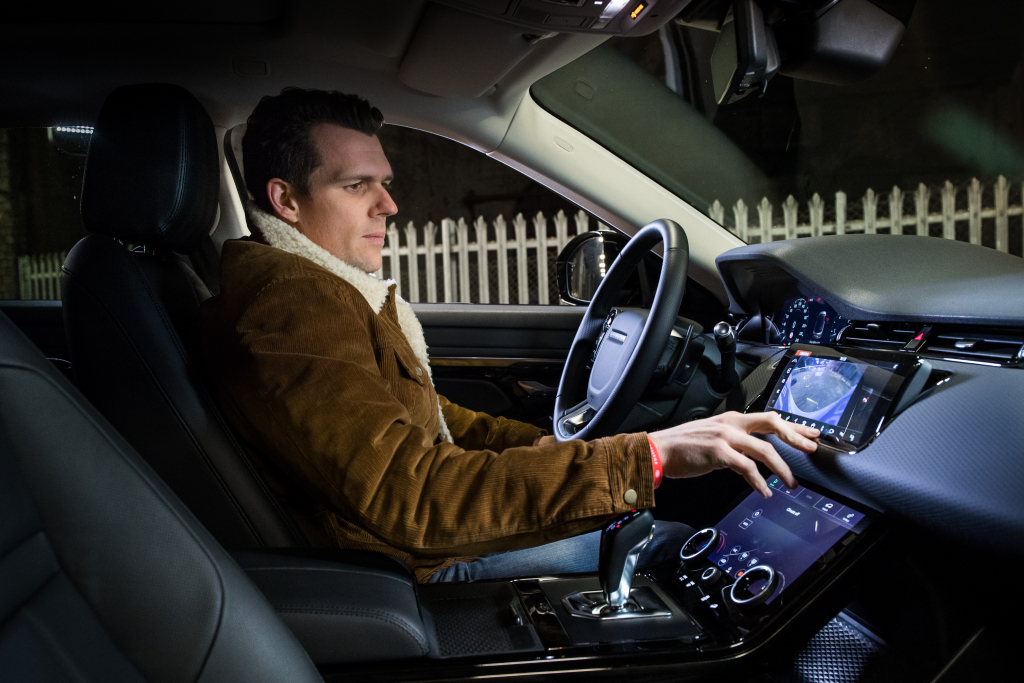 In fact, only the door hinges are carried over from the first generation Evoque and the latest model has more in common with its exquisite Velar big brother than it does with anything else in the Range Rover, erm, range.

Inside, there is the latest iteration of the Touch Pro Duo 2 infotainment system, which boasts two pin sharp tablet-style displays and JLR’s funky ‘floating rings’, while the quality and craftsmanship of materials is now more in line with larger Range Rover products. 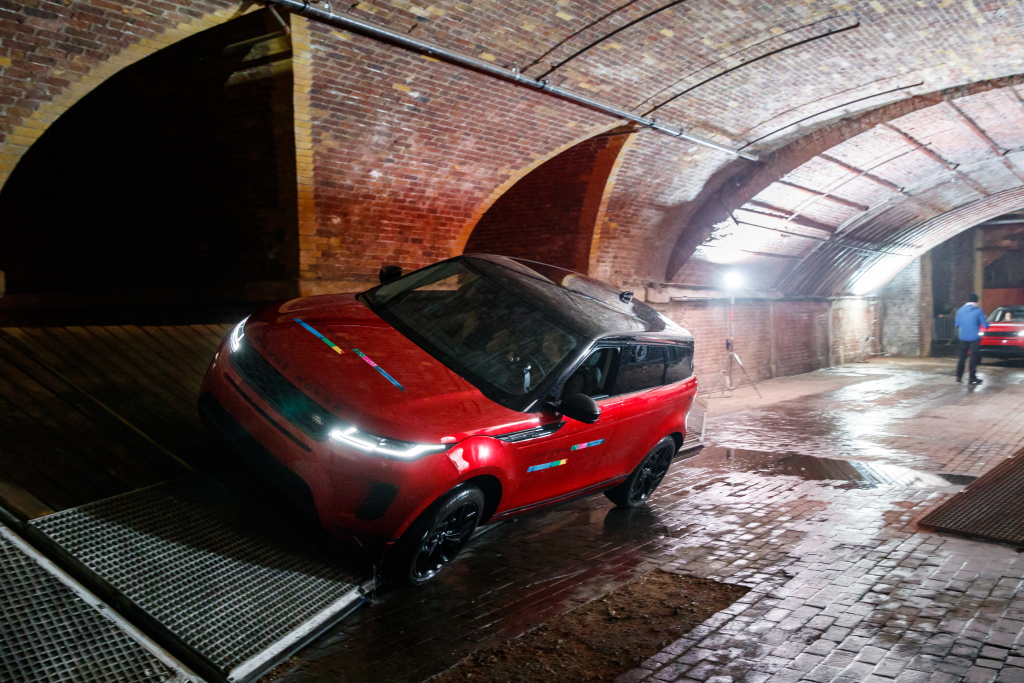 The mini assault course we were treated to didn’t offer much of a chance to form concrete driving impressions, but we’d happily put money on this thing being ten times more comfortable and enjoyable than the previous model.

Instead, the numerous ramps, undulations and water features allowed us to test out some of the phenomenal new technology that sits on-board. 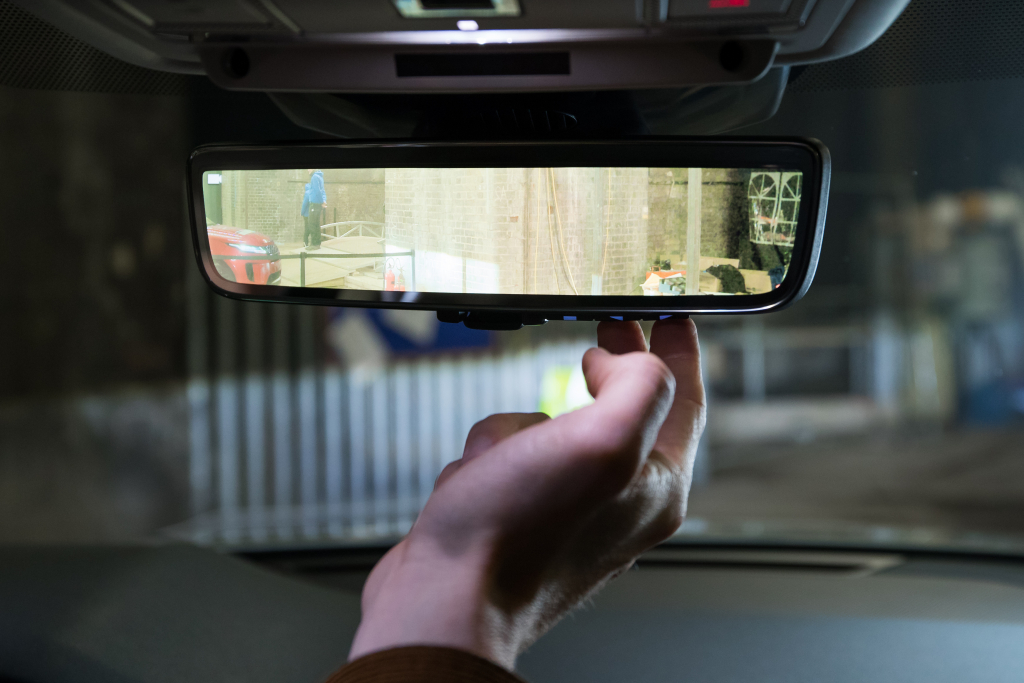 ClearSight Ground View, for example, takes a live video feed from cameras in the door mirrors and front grille to create an image on the infotainment screen that renders the bonnet invisible.

It allows for off-road enthusiasts and inner city urban warriors to avoid nasty boulders or locate a particularly high kerb. 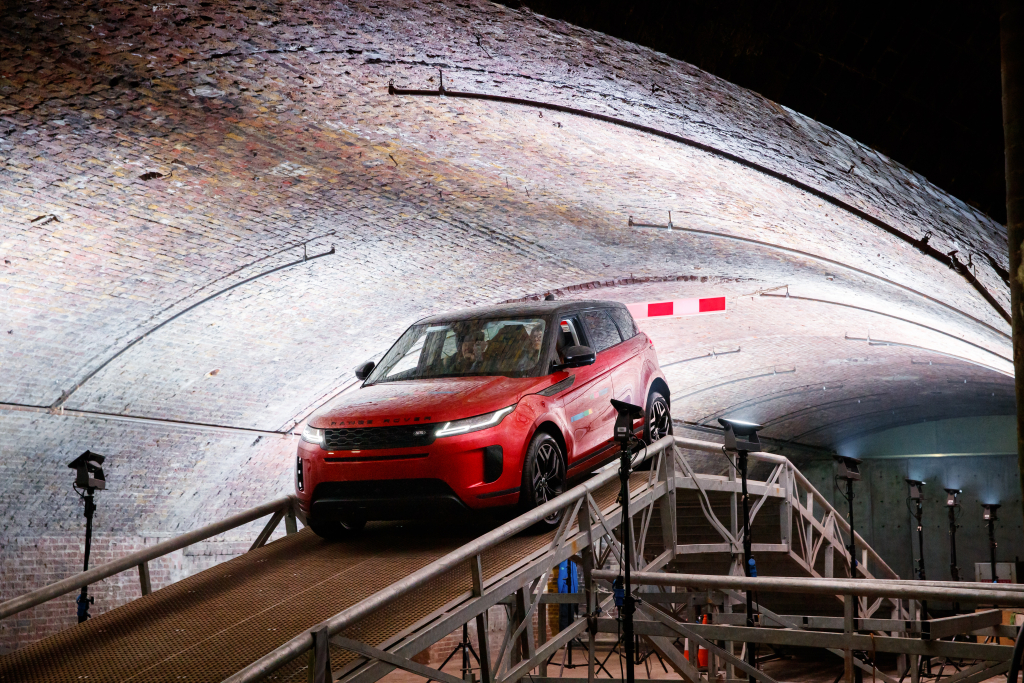 The ClearSight rear view mirror is slightly more confusing but essentially takes a video feed from a rear-facing HD camera mounted to roof and projects this image onto the mirror itself.

“It is still too early to deliver a proper verdict on the new baby Rangie but it appears, on the surface at least, improved in every way”

Designed to be used when someone (or something) is blocking the mirror on the back seats or in the boot, it gives a wider field of vision to the driver and works extremely well in low-light situations – particularly handy for spotting objects and walls when backing into a space at night. 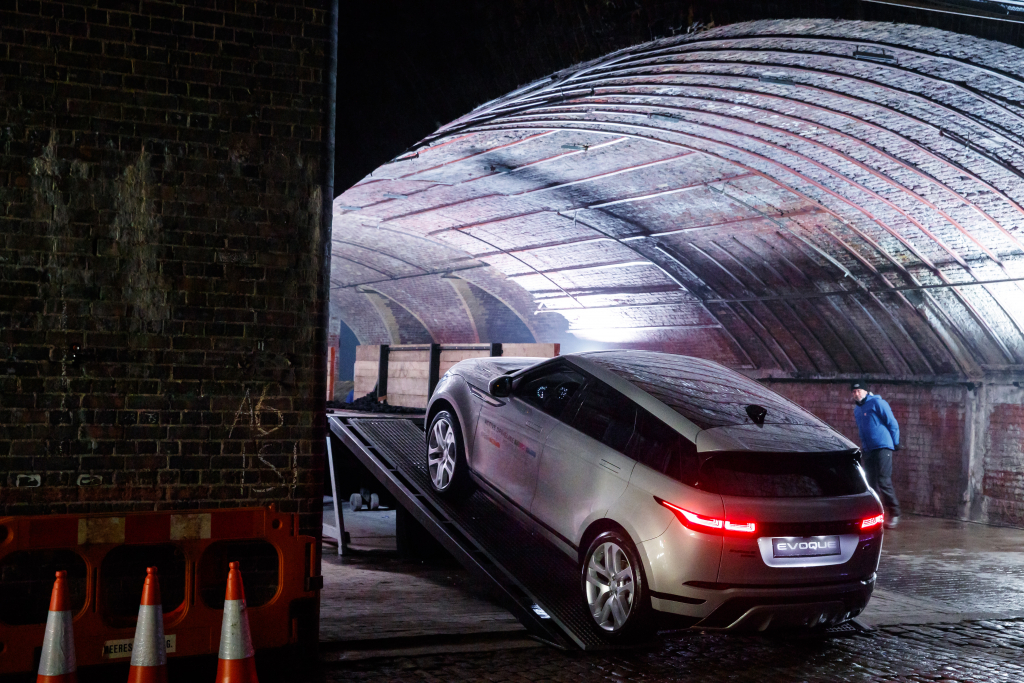 Because this is a Land Rover product, it has also been built to withstand some seriously tough terrain, and the improved wading depth was perfectly highlighted when we dunked it into a swimming pool (yes, really).

It is still too early to deliver a proper verdict on the new baby Rangie but it appears, on the surface at least, improved in every way. 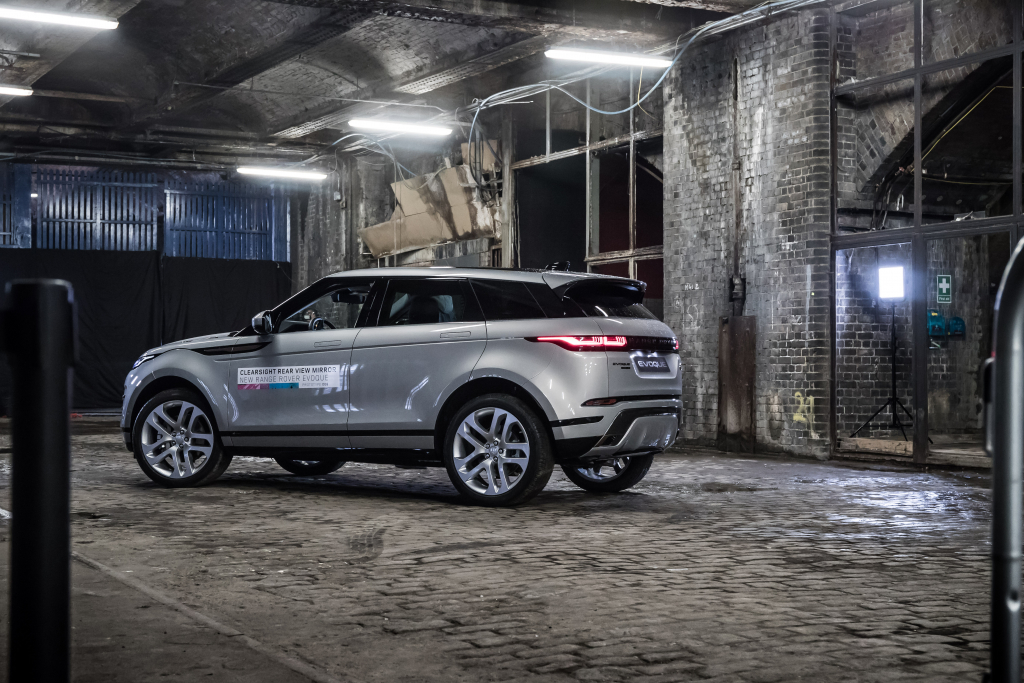 If the first Evoque was a smash hit, we have the feeling version 2.0 might just go platinum. 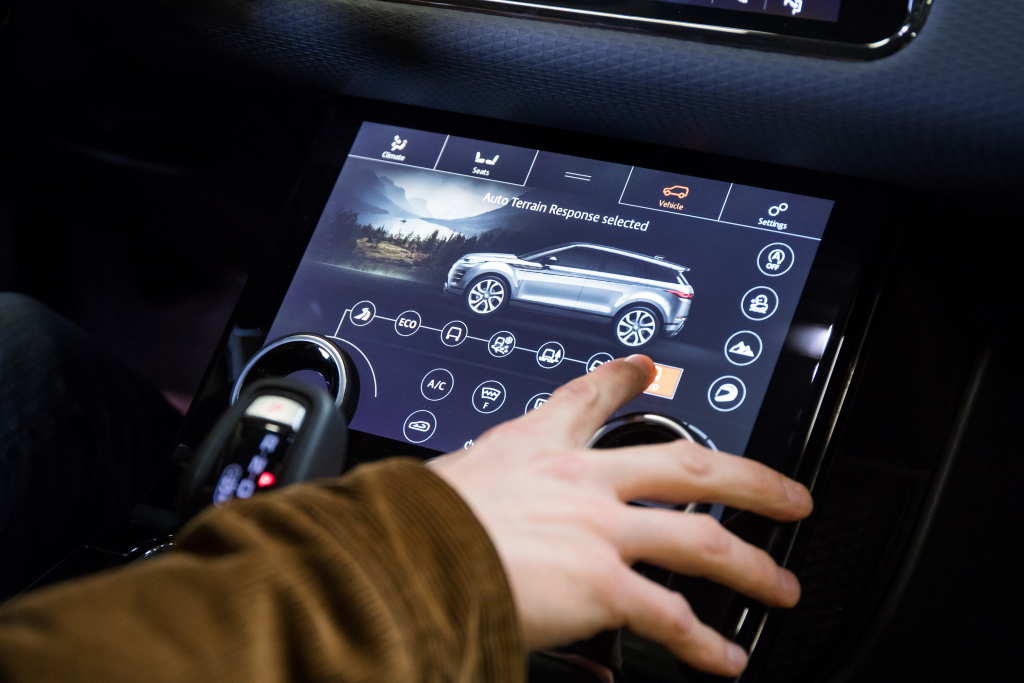 The smartphone that’s as rugged as the iconic off-roader