The life of an automotive journalist is a varied one. Sometimes, when life is good, you’re driving an exotic car in an exotic location, eating 25 meals a day and quaffing fine wines from goblets made of gold.

Or, when fate takes a dark twist (or the editor is in a foul mood) you are sent to cover the latest commercial vehicle launch. As you can imagine, the world of vans and pick-up trucks tends to be a far cry from the helicopters, private jets and caviar of the supercar world.

But Mitsubishi has been making its L200 pick-up truck since the late 1970s and it feels that its brawny load-lugger is one of the beefiest machines to ever grace the market. Its latest generation, with improved looks, better suspension and myriad tech updates, is arguably the best yet and the Japanese marque wanted to prove it. 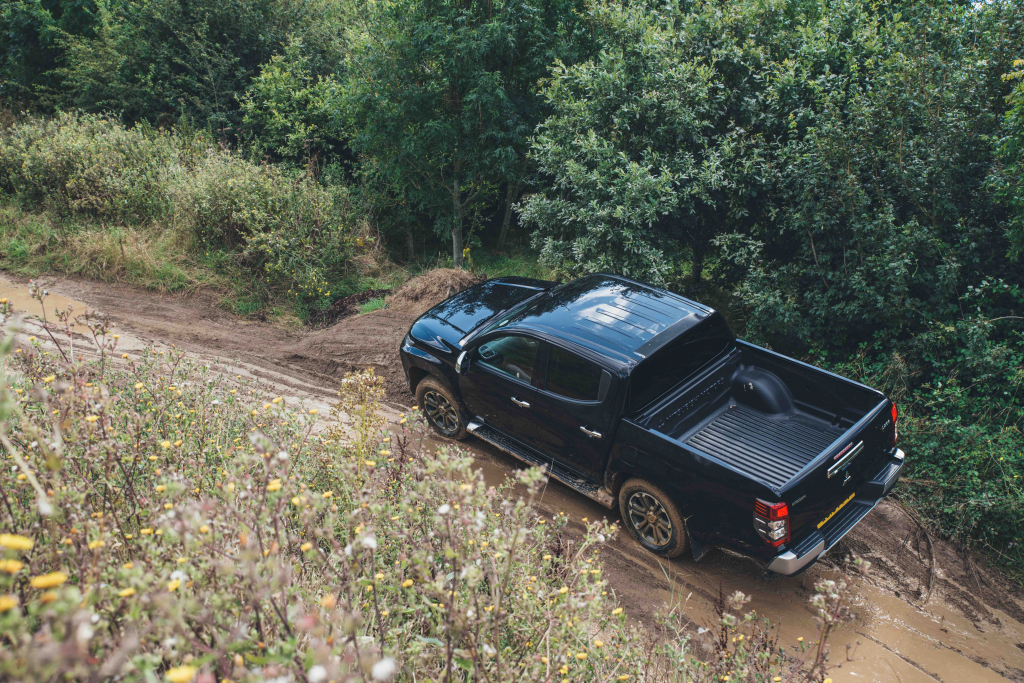 So rather than provide a pub lunch in a sweaty establishment just off the A34 and point us journalistic types towards a one-tonne payload, the team commandeered the dirty bits surrounding Silverstone race circuit and actively encouraged us to try and break its beloved workhorse.

The first test for this upgraded Mitsubishi L200 was a self-styled rally cross course, which consisted of a hoon around a circuit that had recently been turned into a quagmire via some typically British summer weather.

The Grand Tour’s Abbie Eaton was on hand to gives us a few pace notes on the course, which was first taken with all of the traction control systems turned on. Mitsubishi is proud of its improved suite of safety systems, which includes a traction system that is now specifically geared towards off-road capability. 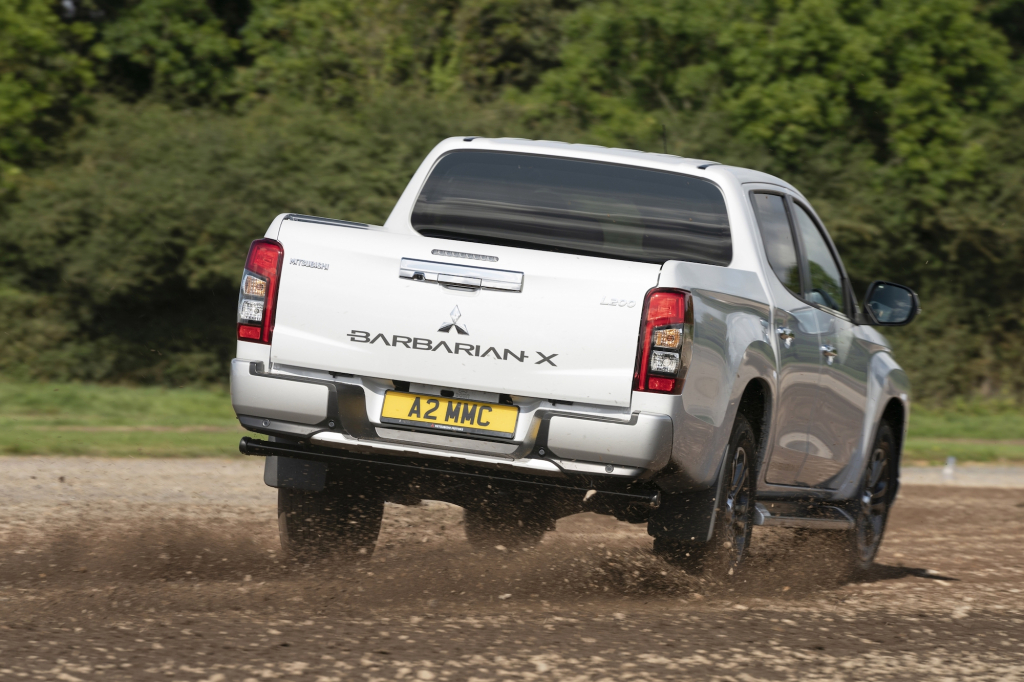 With everything switched on and the new Mitsubishi L200 left in its two-wheel-drive mode, the big pick-up refused to come unstuck, taking these tight but ludicrously muddy corners precisely and deliberately cutting the power when things got out of shape.

Things get faster when flicked into 4H (all-wheel-drive mode), which can now be done at speeds of up to 62mph, as the L200 finds even more grip through the greasy curves. Finally, we are urged to turn everything off and marvel at the ease at which it is possible to control big slides.

Abbie occasionally pulls the handbrake from the passenger seat as we hit a few of the wider turns, forcing the truck to pull off big power slides and throw up arcs of gravel and muck as it does so. Although not bespoke to this vehicle (most pick-tips will drift if you yank the handbrake at 40mph), it is testament to how far you have to go to get this machine to come unstuck. 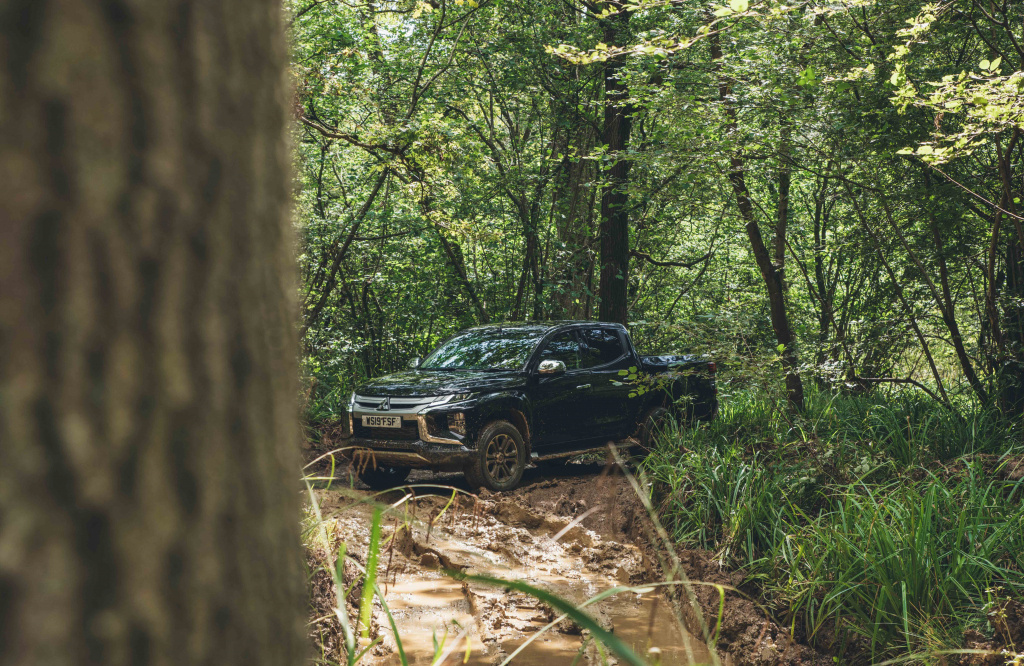 The L200 has always been renowned for its grit and determination when the road runs out, but this latest model takes a leaf out of the Land Rover book of mud-plugging and now introduces several off-road modes that cater for things like Gravel, Mud/Snow, Sand and Rock.

Helmslady Abbie has been replaced by an off-road specialist who proceeds to wax lyrical about the benefits of having individual modes, which cleverly adjust torque delivery, traction control, steering weight and throttle input to suit the varying scenarios.

We crawl around a fairly tame off-road course that includes a few inclines and declines that see the new Mitsubishi L200 tip and shift its weight around. It covers ground effortlessly and the comfort inside the cabin is impressive – there’s barely any need to trouble the grab handles. 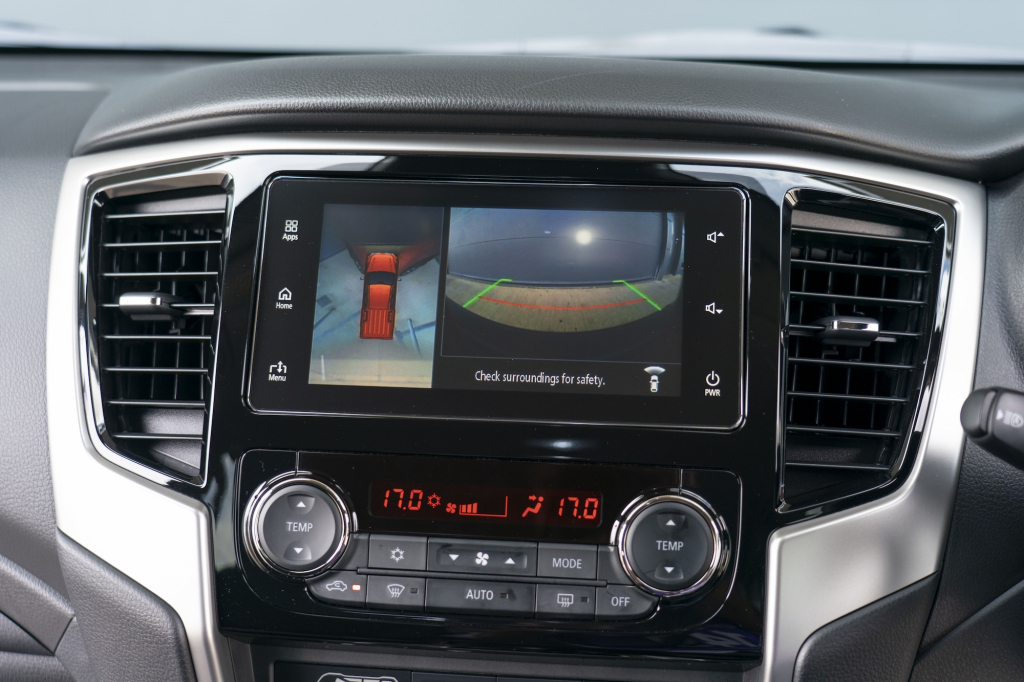 Things get more interesting as we head into a dense forest area, which sports some insanely deep ruts that have been carved by recent downpours. Again, the L200 cruises through it, and there are no qualms about the power delivery from a new, smaller diesel engine.

Displacement might be down from 2.4-litres to 2.3, but this turbocharged diesel unit pumps out 150hp and 400Nm, which is produced 500rpm lower down the rev range then before. This makes it easier and more predictable to pilot out of low speed obstacles like this one and ensures it can handle an impressive 1,080kg payload and 3.5-tonne towing capacity.

Additional features, such as hill start assist and a clever 360-degree camera system on the higher spec models, might deter the off-road purists, but it makes traversing tricky terrain a complete doddle and will be welcomed by the majority of owners who occasionally find themselves in a boggy Royal Ascot car park. 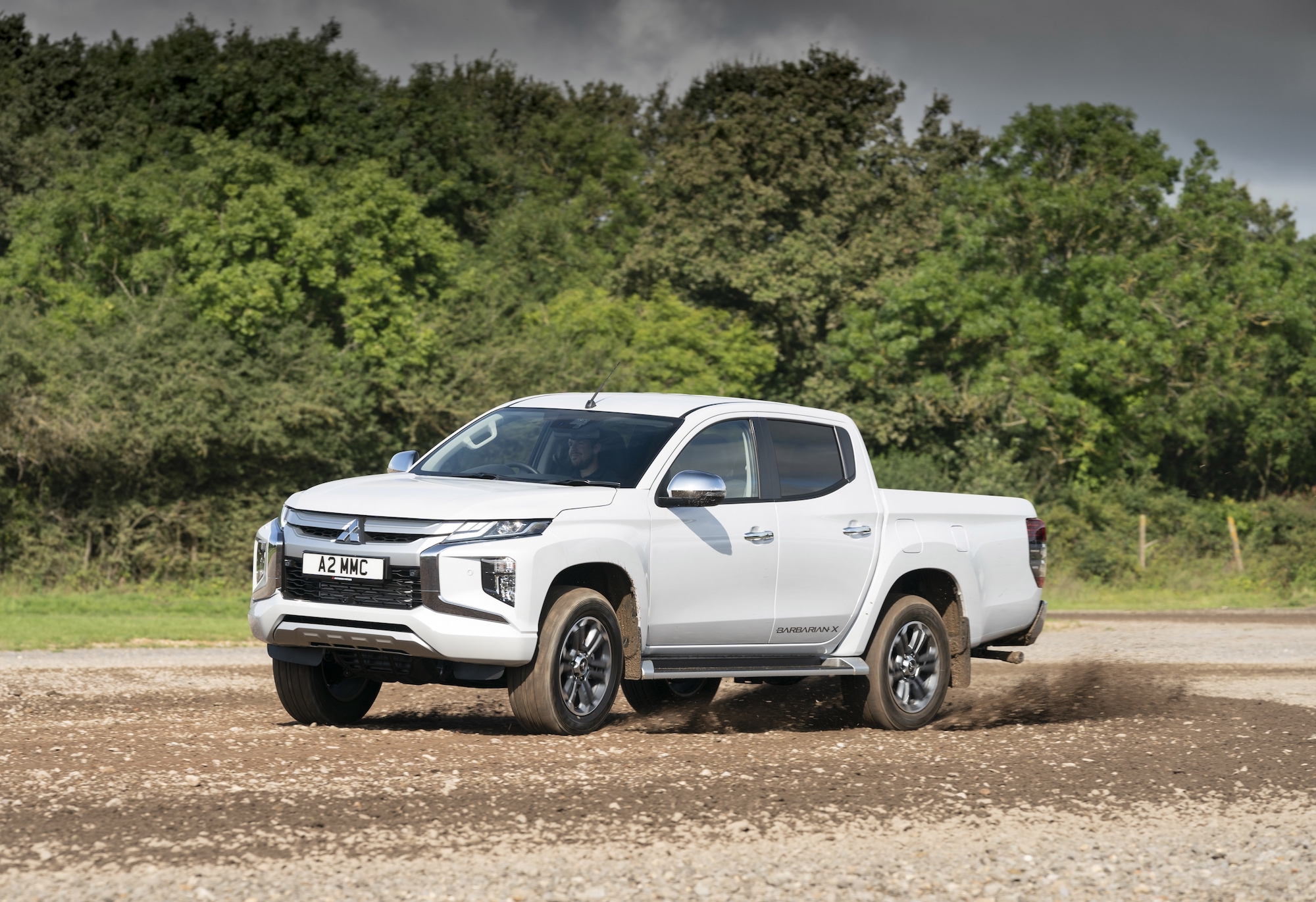 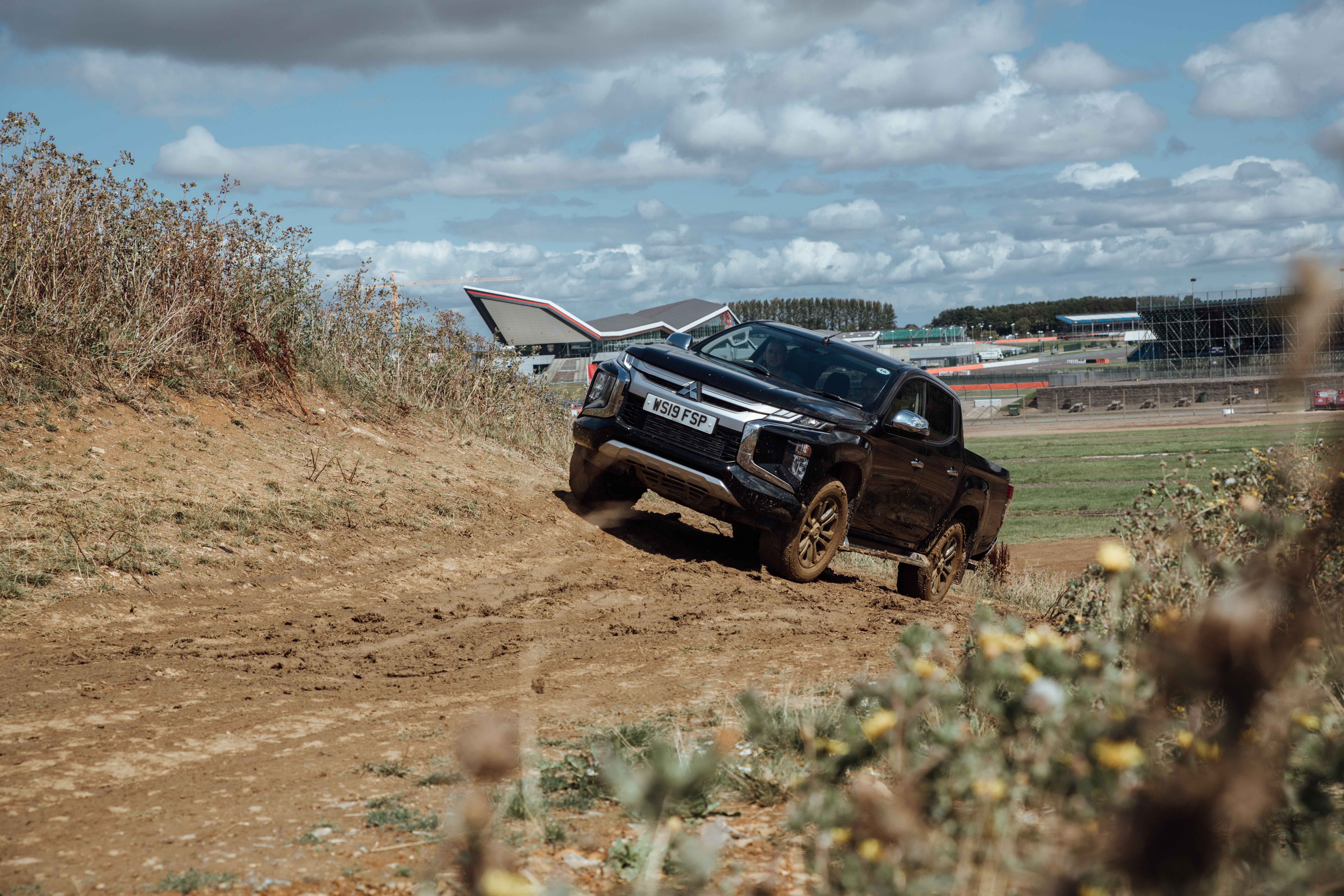 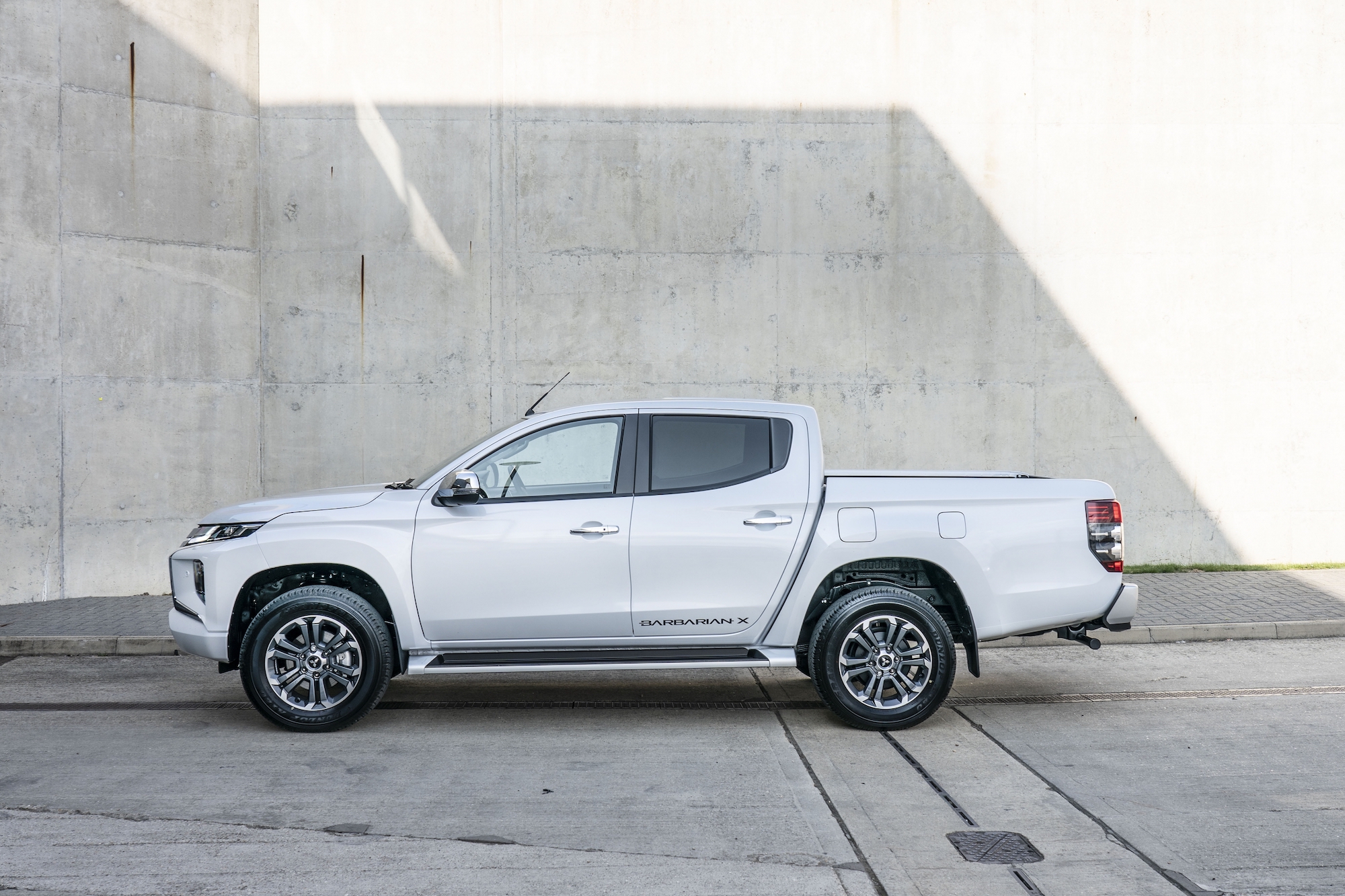 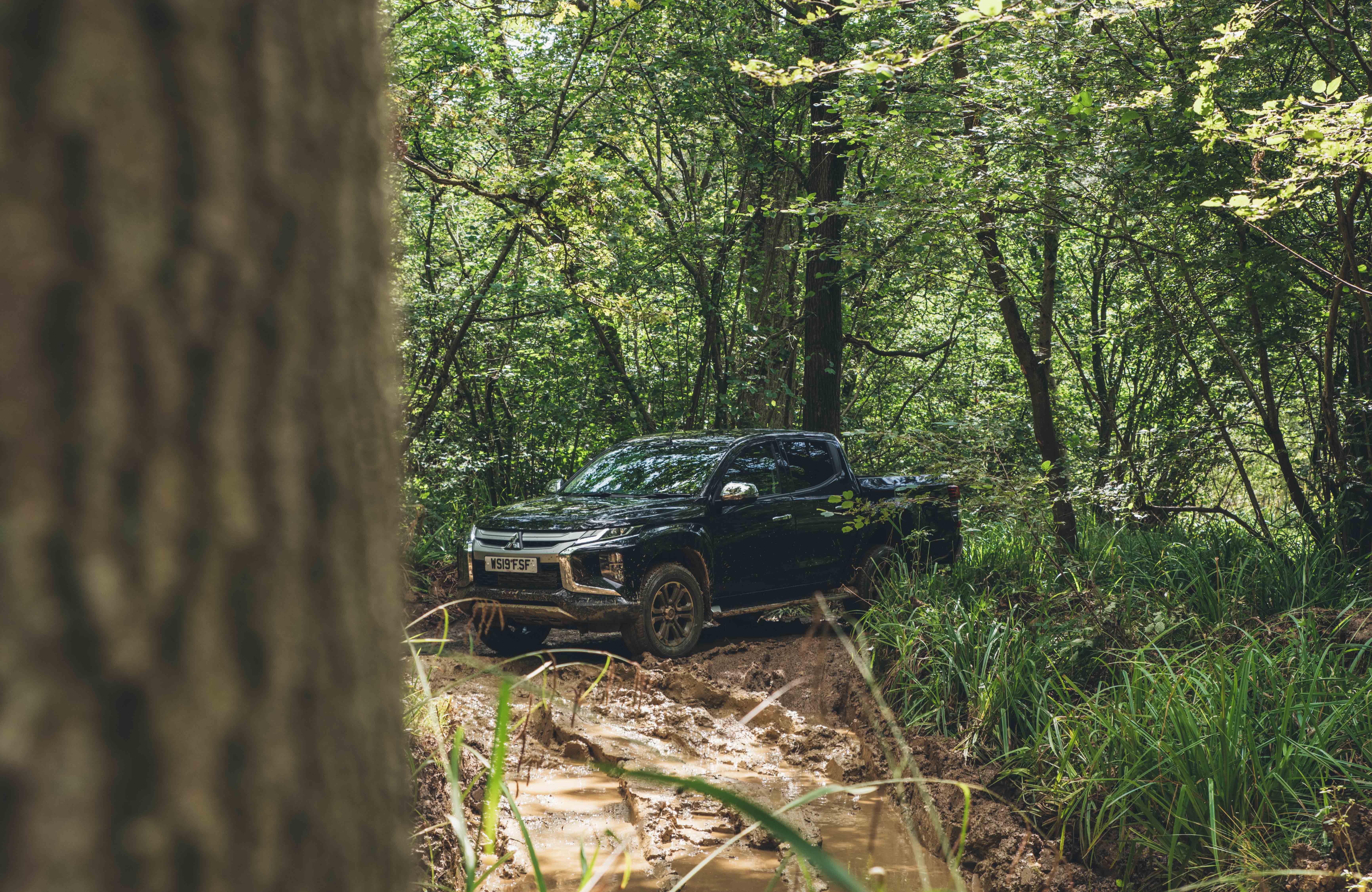 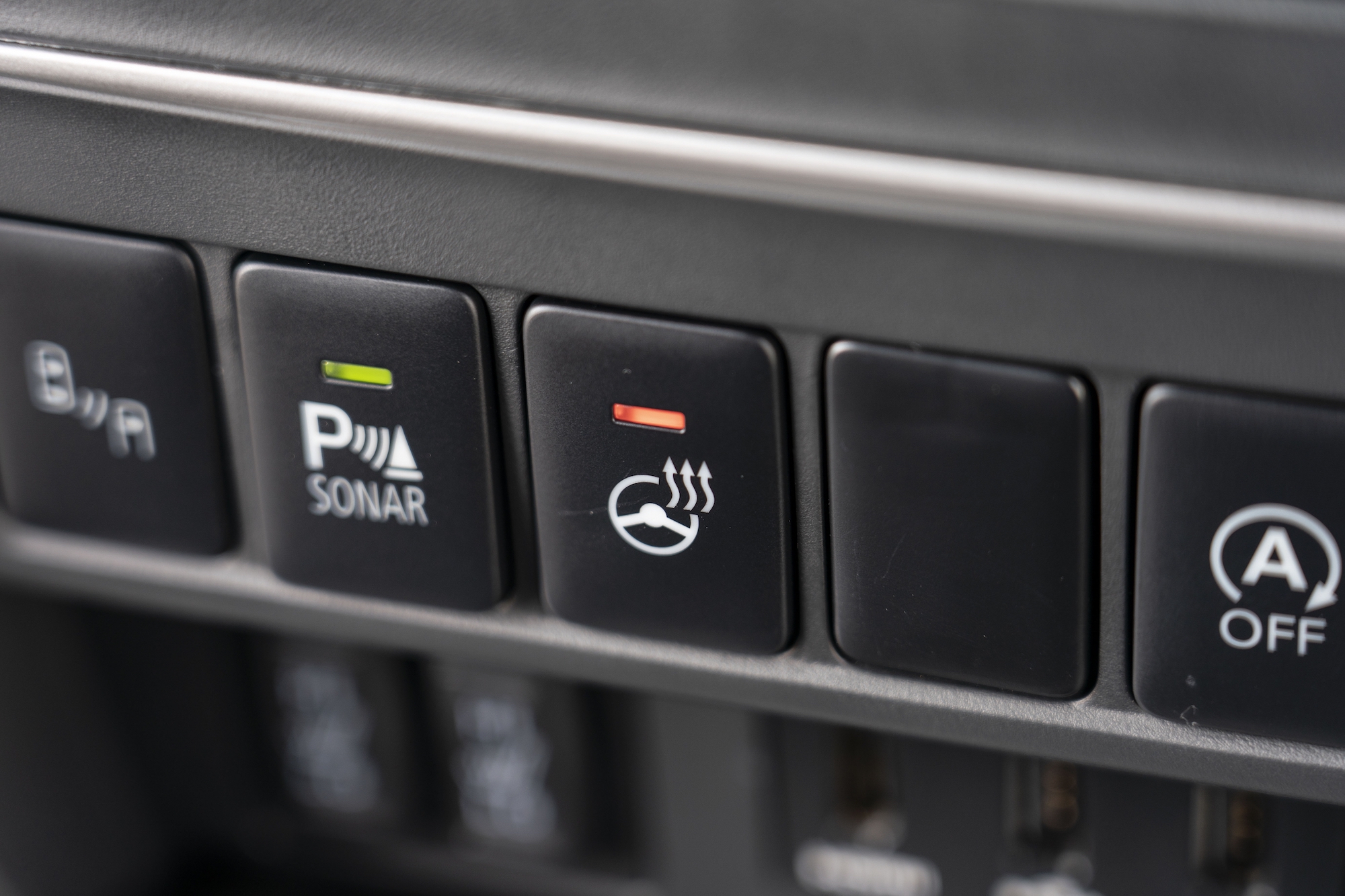 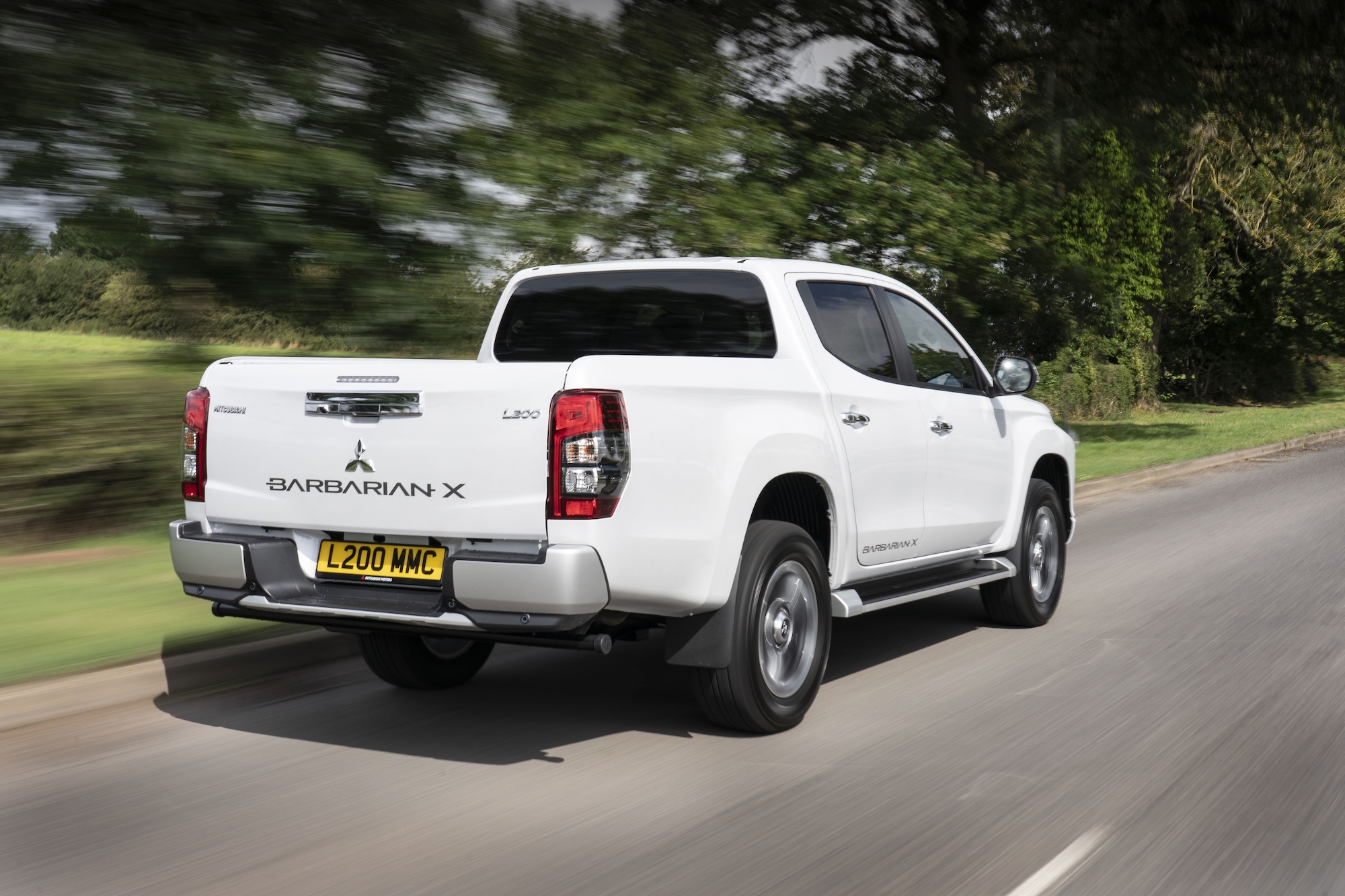 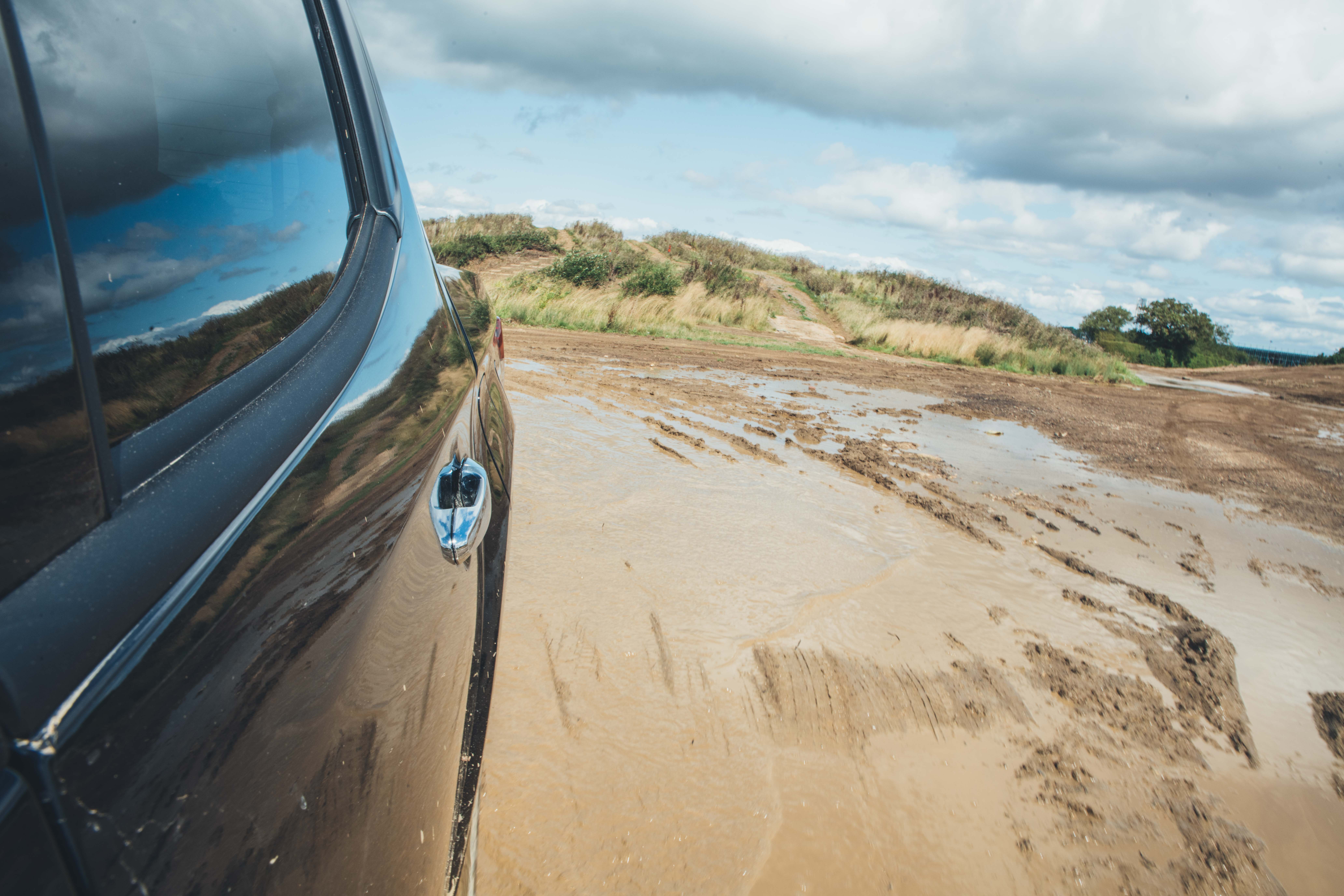 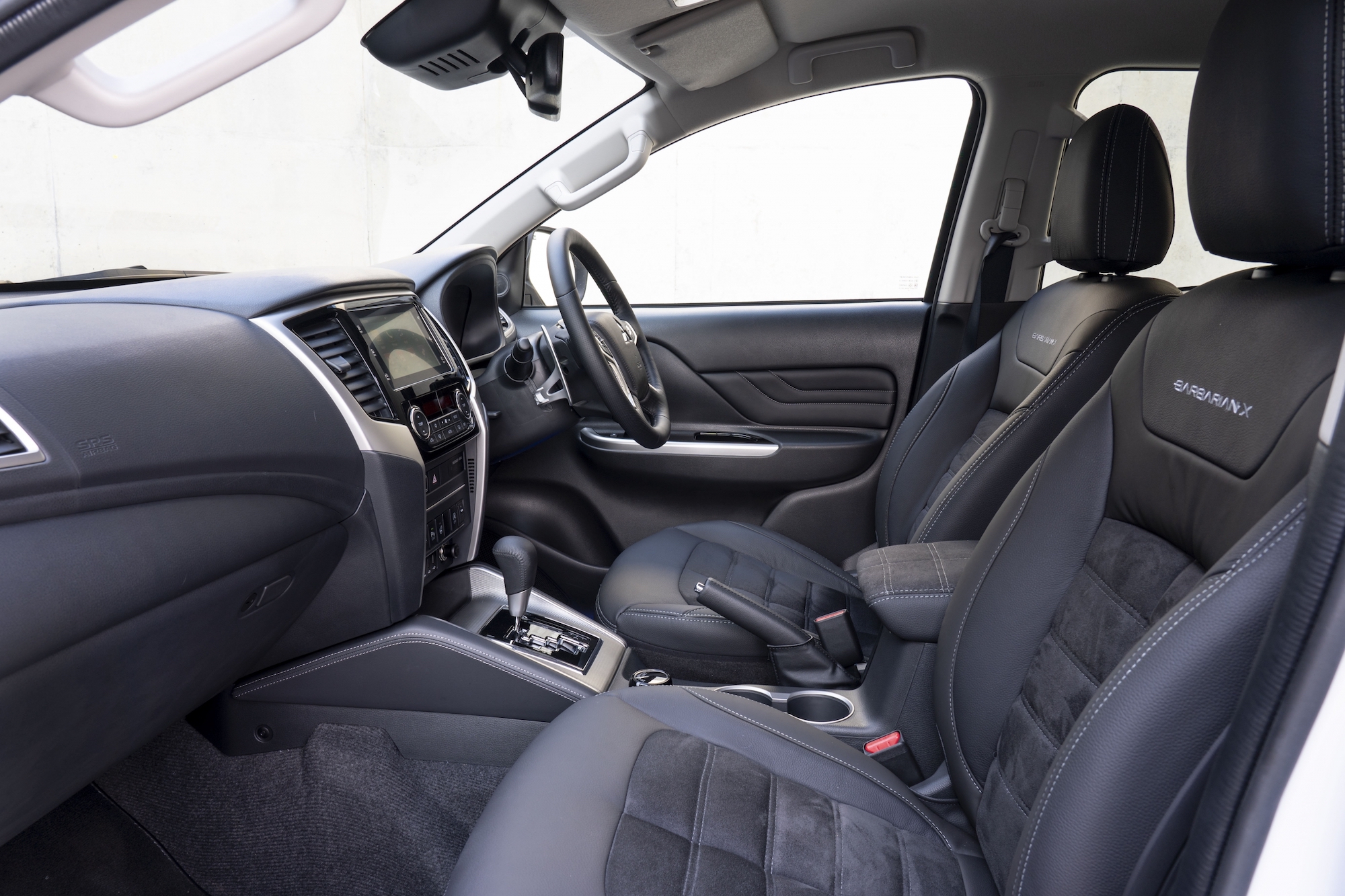 It is clear that on-road manners have been vastly improved in this model and although it is an overused phrase in the automotive industry, this L200 definitely feels the most ‘car-like’ to date.

Essentially, that means you now get it with 18-inch alloys, the option of a six-speed automatic and a proper infotainment system that does proper smartphone connectivity, DAB radio and the rest. That said, it’s still pretty basic inside and Mitsubishi insists on sticking with the over-sized plastic buttons, which might be great for use with gloved hands but look cheap and nasty.

“In the name of proper commercial vehicle journalism, we didn’t take things steady and the L200 thanked us for it”

A lot of the interior plastics are pretty bargain basement and the new and improved engine is still a bit noisy at idle. Work has definitely been done to improve road noise, and it’s certainly a comfortable place to eat into the motorway miles, but we found the auto gearbox sometimes got a bit confused and the steering felt overly weighty compared to rivals, such as the VW Amarok, Nissan Navara and Ford Ranger. 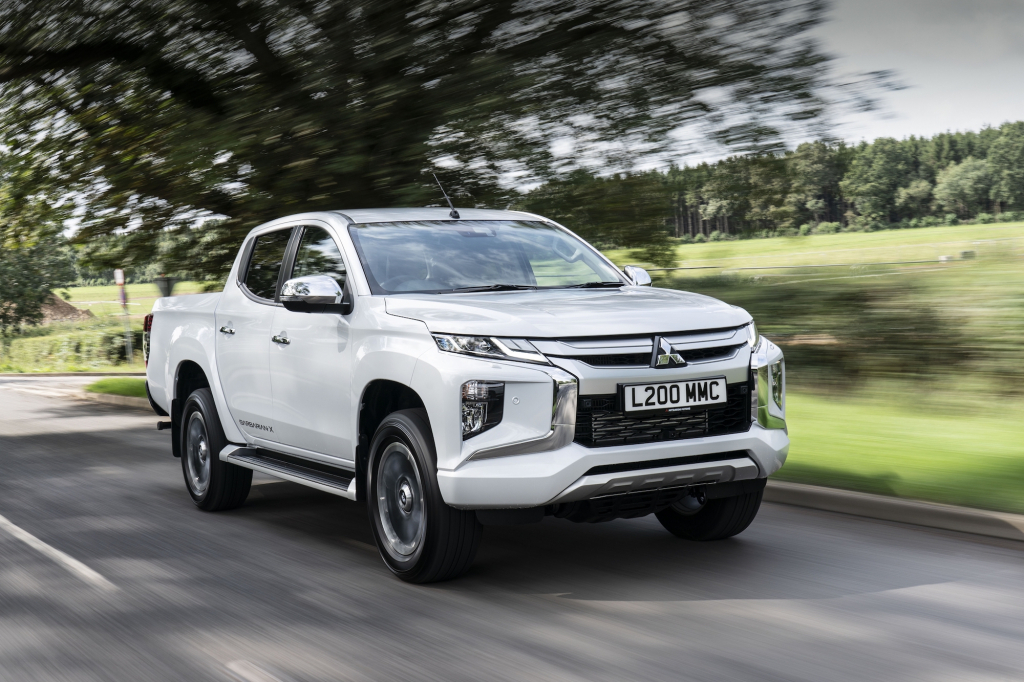 Regardless, there’s now an impressive suite of driver aids, including blind spot warning, forward collision mitigation and rear cross traffic alert, which makes the thought of piloting a large pick-up more palatable to the uninitiated.

On that note, the L200 doesn’t actually feel that large and at 1,815mm-wide, it’s pretty easy to thread through narrow country roads and park up at your local supermarket. Fuel economy is also pretty decent, with the official WLTP figure of 32.1mpg easily beatable if you take things steady.

In the name of proper commercial vehicle journalism, we didn’t take things steady and the L200 thanked us for it. Despite its sharper looks, increased interior gadgetry and fancy LED headlights, this is still very much a vehicle that prefers a fry-up to foie gras. Don’t go changing.