It’s difficult to count the amount of times someone has told me that I have “the greatest job in the world,” or something along those lines. It’s true, I am are incredibly lucky, as I get to jump behind the wheel of new cars or throw a leg over the latest motorcycles more often than most. But that doesn’t mean I can’t have a good moan every now and then.

One of the biggest bugbears I face, especially when creating reviews and contents for some of my other freelance outlets, is the number of small SUVs that I have to drive. I know, I know – there are far worse things to happen in life but having to pass judgement on yet another, slightly jacked up crossover is like pulling teeth. So I’ll be the first to admit that when the Volkswagen T-Roc R was dropped at my house, I didn’t really give it a second look. In fact, I didn’t pay much attention to the fact that it sports the engine from a Golf R.

Look closer and it soon becomes apparent that this isn’t your run-of-the-mill SUV. It looks great, for a start, wearing its quad exhaust pipes with pride and sporting a more muscular body kit and larger, 19″ ‘Pretoria’ alloy wheels. The standard T-Roc isn’t particularly off-road-esque in its appearance, so the fact that this little 4×4 has been warmed-up doesn’t look as fussy as, say, the more expensive Audi SQ2.

Step inside and there are plenty of racy R touches, including a flat-bottomed steering wheel, grippy sports seats and a large 8-inch touchscreen infotainment display that is commonplace on most VW products now. However, some of the interior plastics feel overly hard and scratchy. This could have been a deliberate ploy by Volkswagen designers to make the T-Roc’s interior feel more rugged, but it just comes across as a bit cheap here, especially considering this car costs just shy of £40,000. 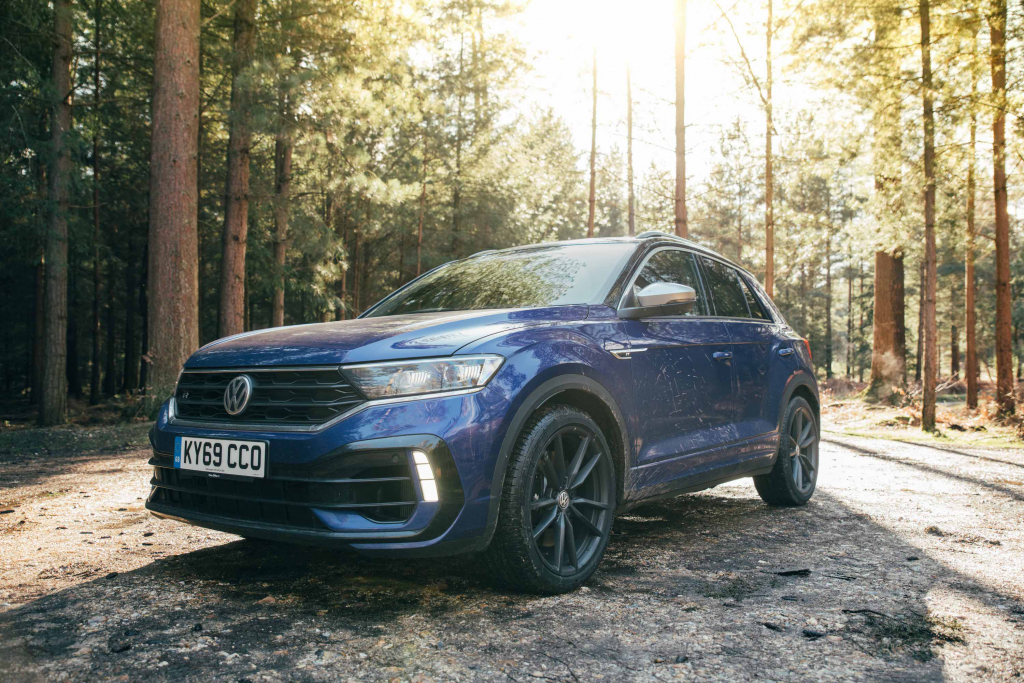 This infotainment system is excellent, though, and allows for phones to be easily connected and use of Apple CarPlay and Android Auto is simple and reliable. Better still, traditional instruments are replaced with a stylish digital display in this model, which can give a variety of read-outs from navigational assistance to speed and trip information.

Delve into the system further and you’ll notice a few bespoke touches to this T-Roc R. Firstly there’s a little sporty Easter Egg in the form of a track-based lap timer, but users will also notice a number of different driving modes. These range from Eco, through Comfort and to the raciest Sport Mode. Users can also set up a mode to suit personal preferences, with access to the weight of the steering, the throttle response and noisiness of the engine. 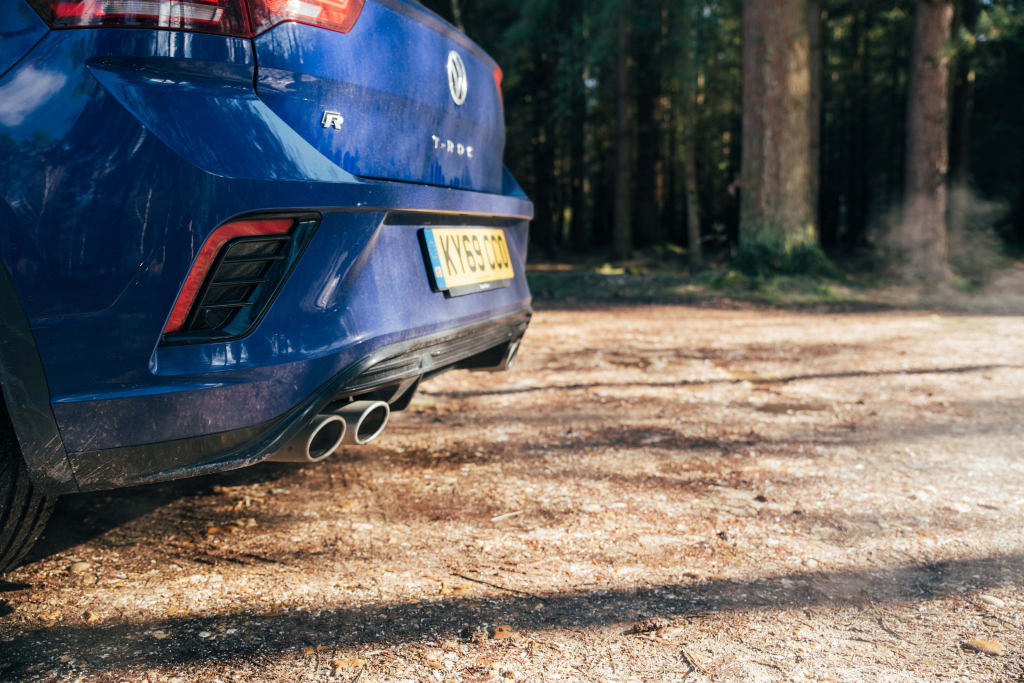 But because the T-Roc is also designed to handle a little off-road action, there is the addition of another dial that adapts the all-wheel-drive system to cope with a number of different situations, including ice and rocks. Alas, these niche crossovers tend to fall down here, because those stunning 19-inch alloy wheels and low profile tyres aren’t exactly designed to venture off the beaten path and the lack of ground clearance makes tackling anything more than a slightly soggy field rather difficult.

Ignore the mud-plugging aspects for a moment and return to the reason for this car to exist, chiefly to raise smiles when the roads ahead become twisting and drivers fancy having a bit of fun. Likes its Golf R brethren, the T-Roc R proves a highly entertaining car to drive fast. It offers almost unbelievable levels of grip and the 4.8-second 0-62mph feels blistering in a car of this nature. The seven-speed, dual-clutch auto transmission is predictably smooth and easy to live with, although it doesn’t really allow total control over gear changes. 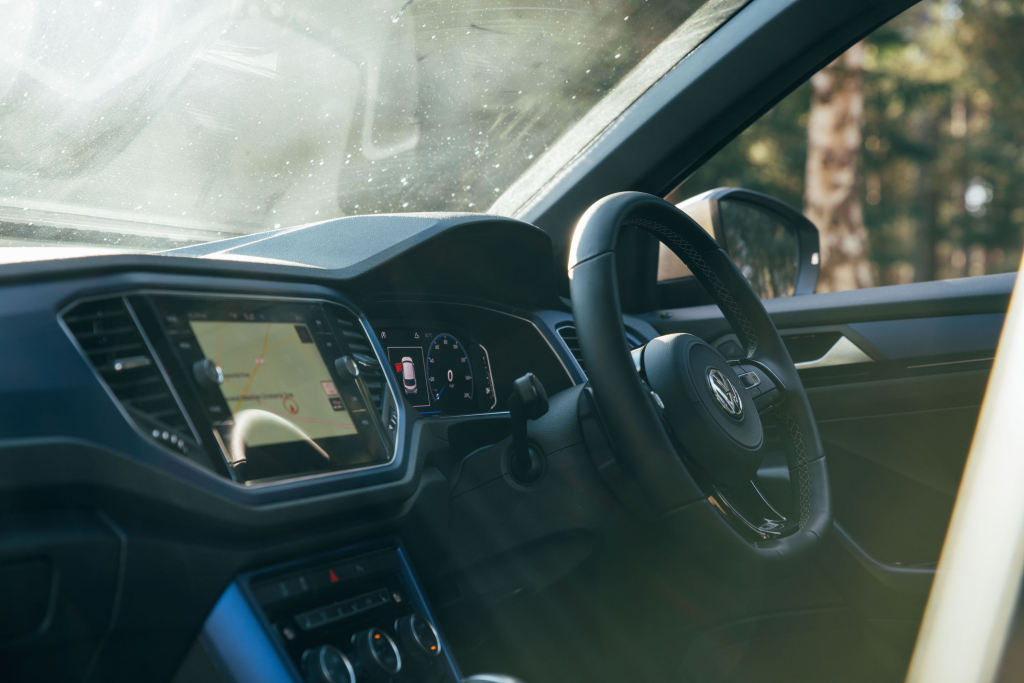 Arguably the best thing here though is the fact the T-Roc R is more practical than the standard Golf R, namely because the raised ride height makes it easy to clamber in and out of (especially if you have children), the boot is larger and the interior has more useable space.

In fact, we took a trip to Ikea during our test drive and managed to squeeze a large office desk, swivel chair, a rug and various pot plants into the cabin with the rear seats folded. All of that and the T-Roc R is still happy to accelerate away from the lights quicker than most hot hatches. 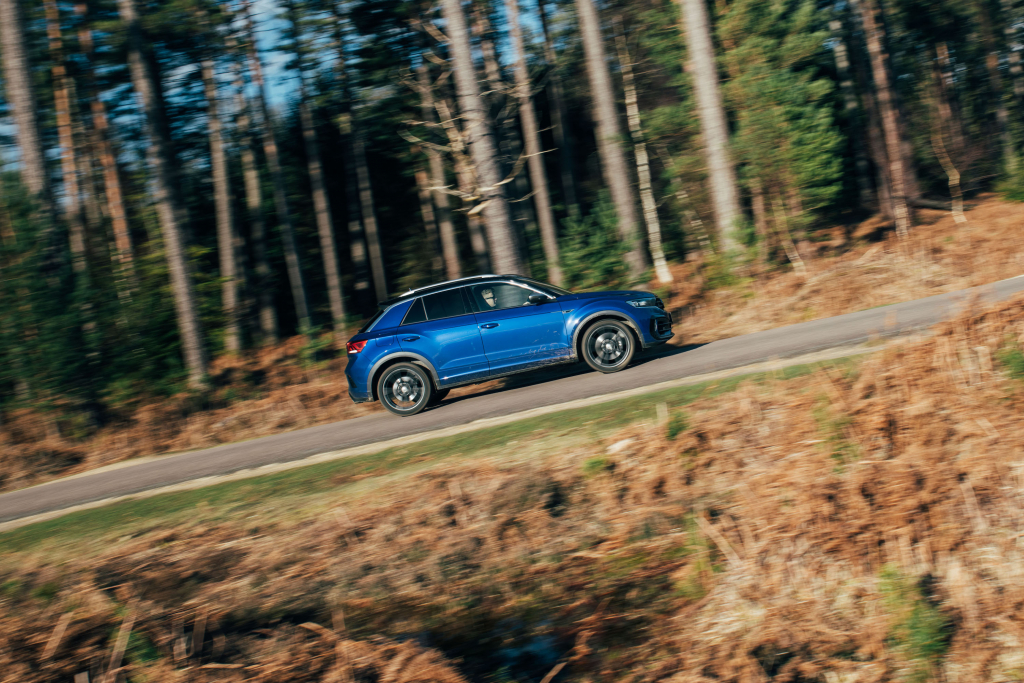 Ignore the cheaper plastics inside and the VW T-Roc R is a very tempting proposition for those who want some practicality without giving up performance or styling. Arguably more attention-grabbing than the Golf R Estate but almost as practical, it neatly blends molten hatch performance figures with the ability to swallow life’s baggage. The ultimate shopping trolley? We think so.