You can’t blame Suzuki for wanting to jump on the burgeoning cafe racer bandwagon. In today’s current climate, bike brands are trying absolutely everything to notch up a few extra sales.

While the Suzuki SV650X is about as far removed from some of the custom creations you’ll find hanging around London’s The Bike Shed, it features a bunch of exterior add-ons that aim to freshen up the look of this popular street bike. 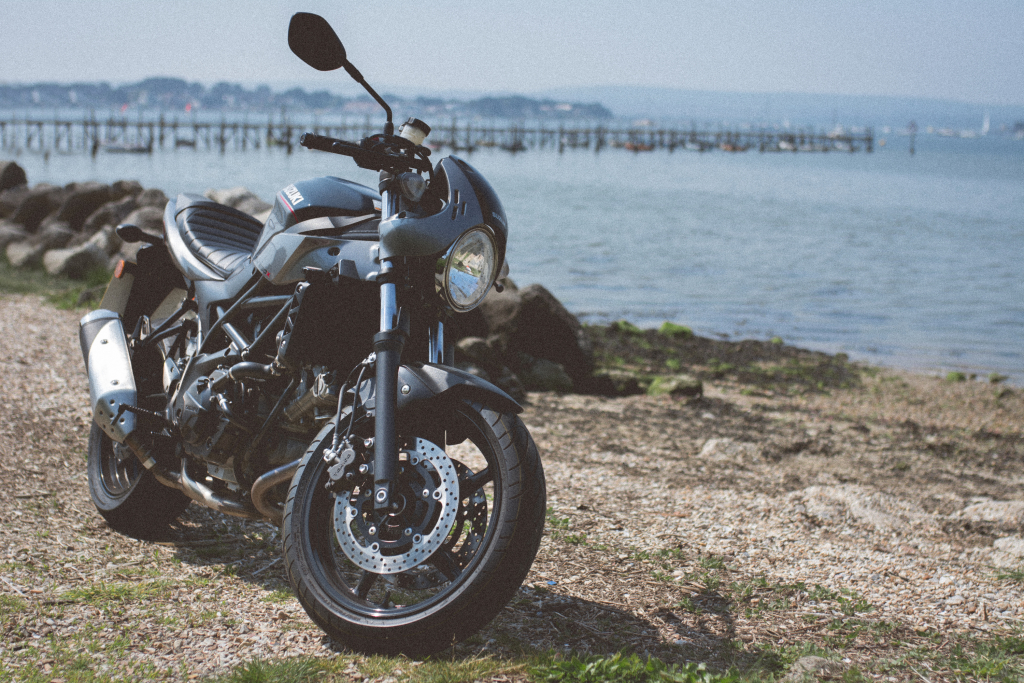 Not to be confused with the Cafe Sport Accessory Pack that can be added to the standard SV650 for a relatively expensive £849, the standalone SV650X model commands a mere £300 premium and offers plenty more.

“As an introduction into the world of motorcycling, it is pretty much faultless”

There are clip-ons bars for a start, a neat bikini headlight cowling, bespoke side panels, a slick Metallic Oort grey and Glass Sparkle black paint job (that’s your only choice) and rad retro decals on the tank and panels. 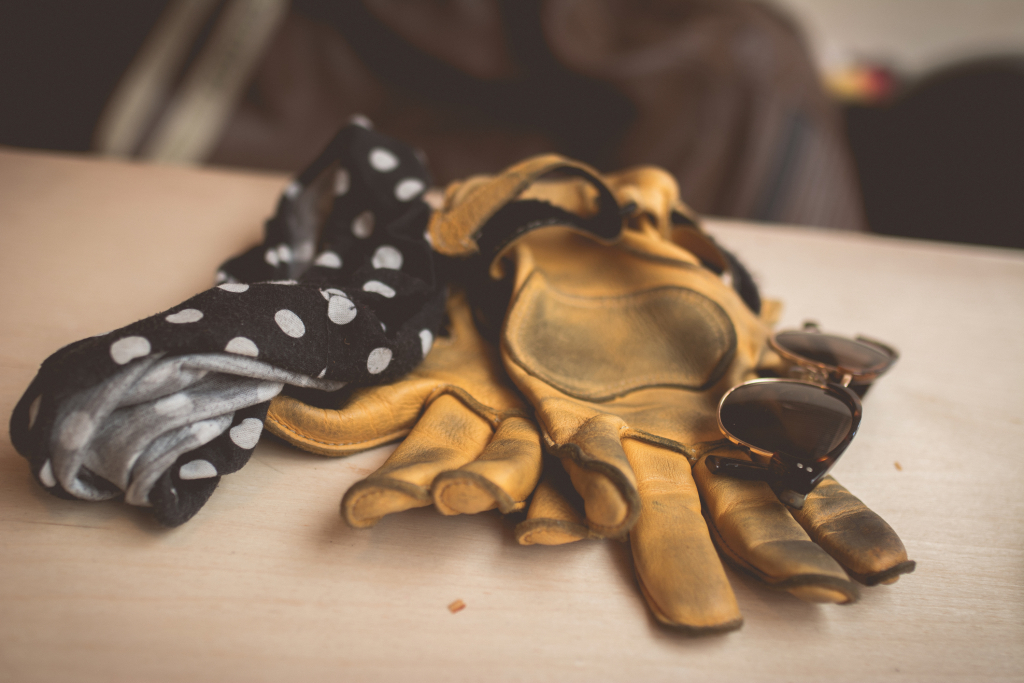 To some, it might seem like a token nod to the cafe racer scene but beneath the additional touches is the same excellent V-Twin engine, which has only received nominal upgrades over the original model of the late 90s but boasts additional modern tech, such as low RPM assist and Suzuki’s easy start functionality.

Throttle response remains smooth and linear, while the gearbox is so buttery you can click through the upshifts without bothering the clutch.

Our time with the machine saw us tackle favoured B-roads, take on several long motorway schleps – including a 400-mile weekend round trip – and use it as a daily drive. 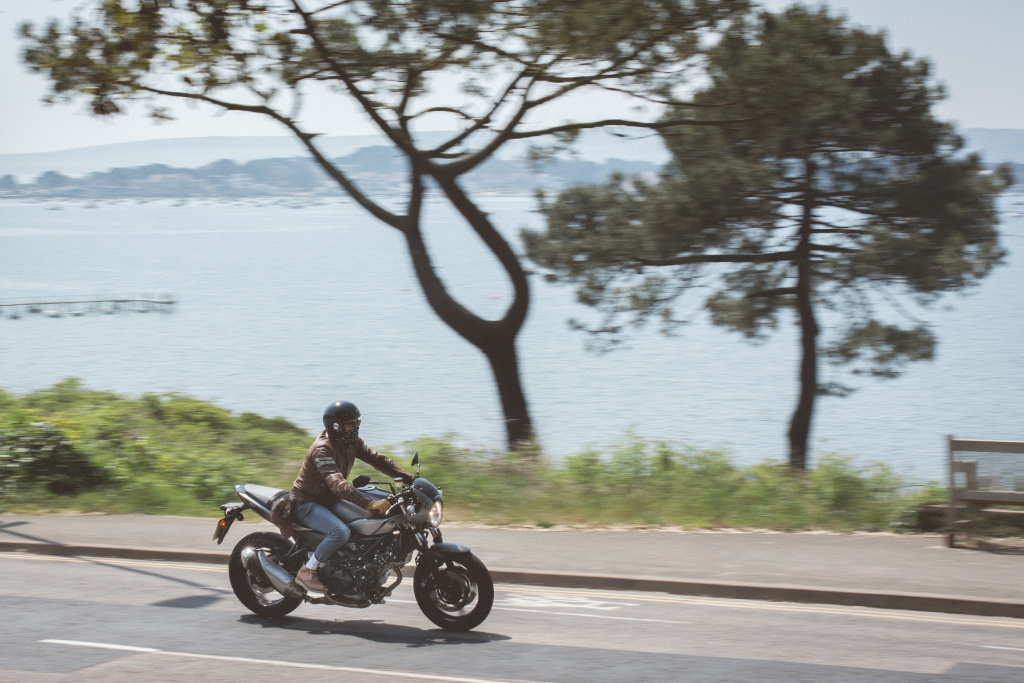 Even with its relatively small 650cc engine and skinny naked frame, it took on all of the above situations with ease and never once felt uncomfortable, unwieldy or underpowered.

Handling has always been the SV650’s strongpoint and it manages to be both extremely easy to master, yet delivers the chuckles by the bucketload if you want to push on. 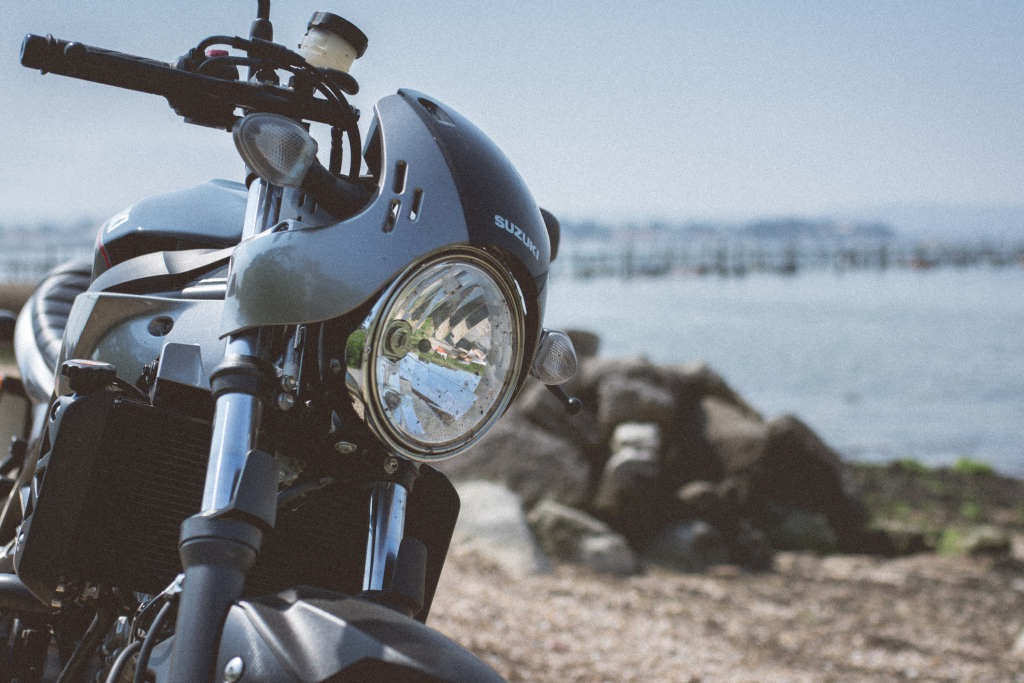 Of course, that 650cc engine might feel a bit lame for those used to larger sports bikes, but it has the all-rounder brief nailed nicely.

As an introduction into the world of motorcycling, it is pretty much faultless, with that tried-and-tested engine proving so easy to wrangle around irritating city traffic and the chassis well geared up for some more spirited riding when the mood takes.

There are a few things I’d love to change about the bike, namely sticking a louder end-can on the whisper-quiet exhaust and making the dial menus easier to cycle through when riding, but it’s a great little machine that will suit a variety of abilities. 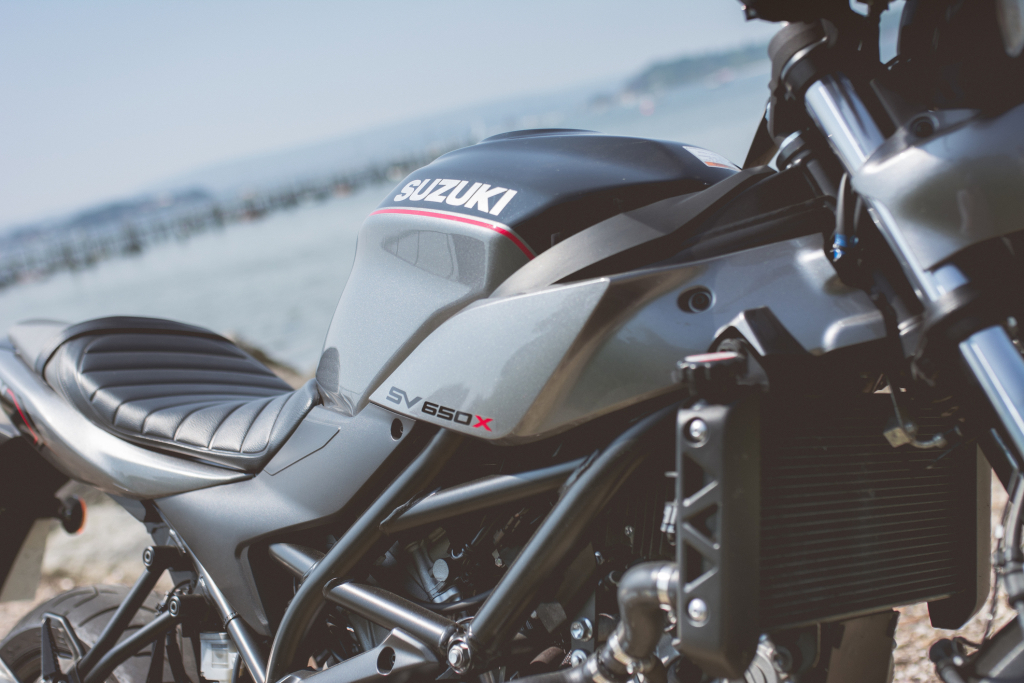 Alas, cafe racer aficionados will likely baulk at the underwhelming attempt to add some custom scene touches but that shouldn’t take away from the fact that the trellis frame SV650 is still a great bike, hipster accoutrements or not.

And those additional extras do plenty to improve the overall aesthetic of the bike, with the roll top seat and drop bars offering a sportier presence, while the grey paintjob seems to draw the eye towards the complex network of frame tubes and exhaust metal.

Although not the typical retro modern machine that we tend to focus on here at Flat-Out, it’s difficult to ignore the Suzuki SV650X thanks to its excellent combination of everyday usability, comfort and promise of giggles when the mood takes. 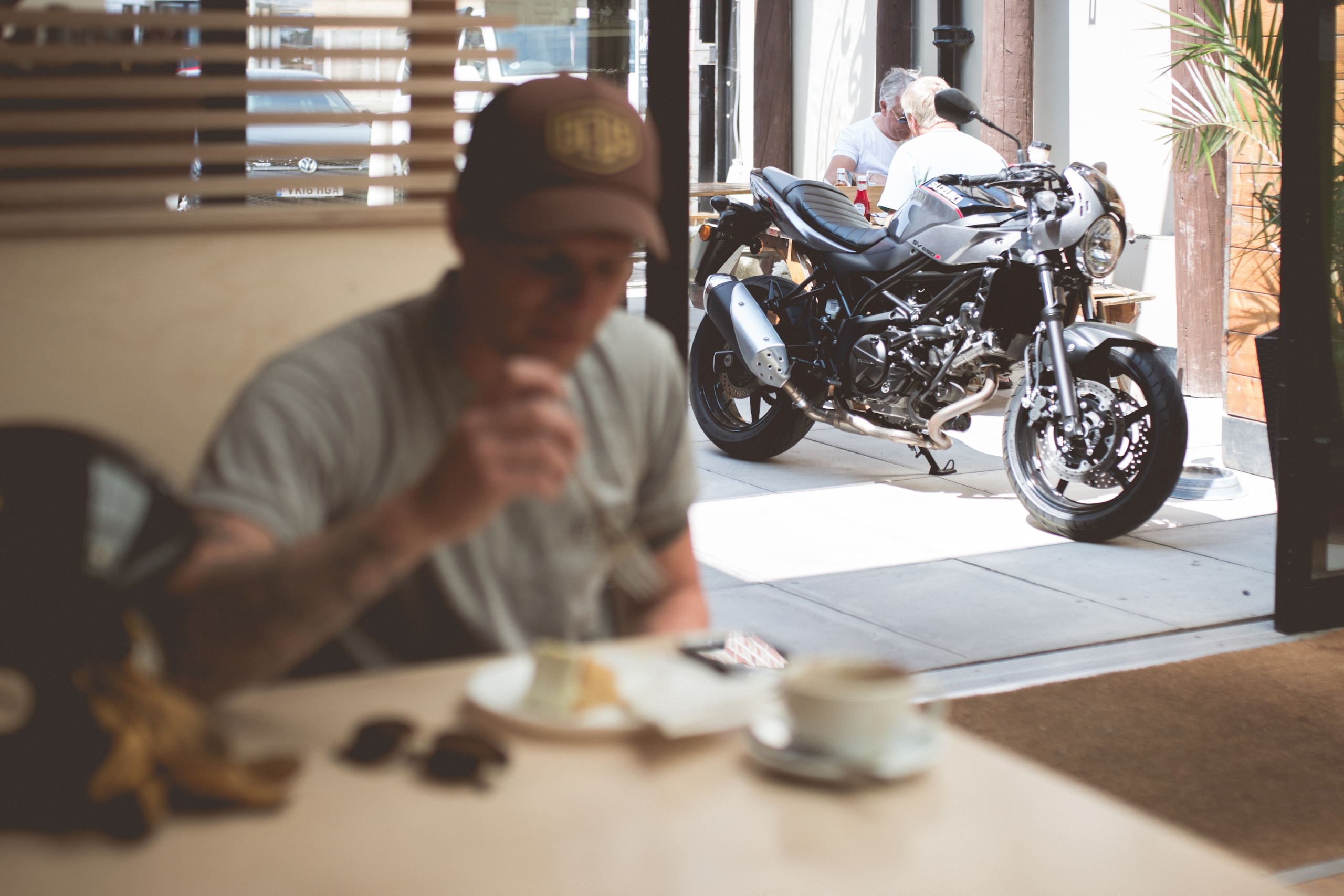 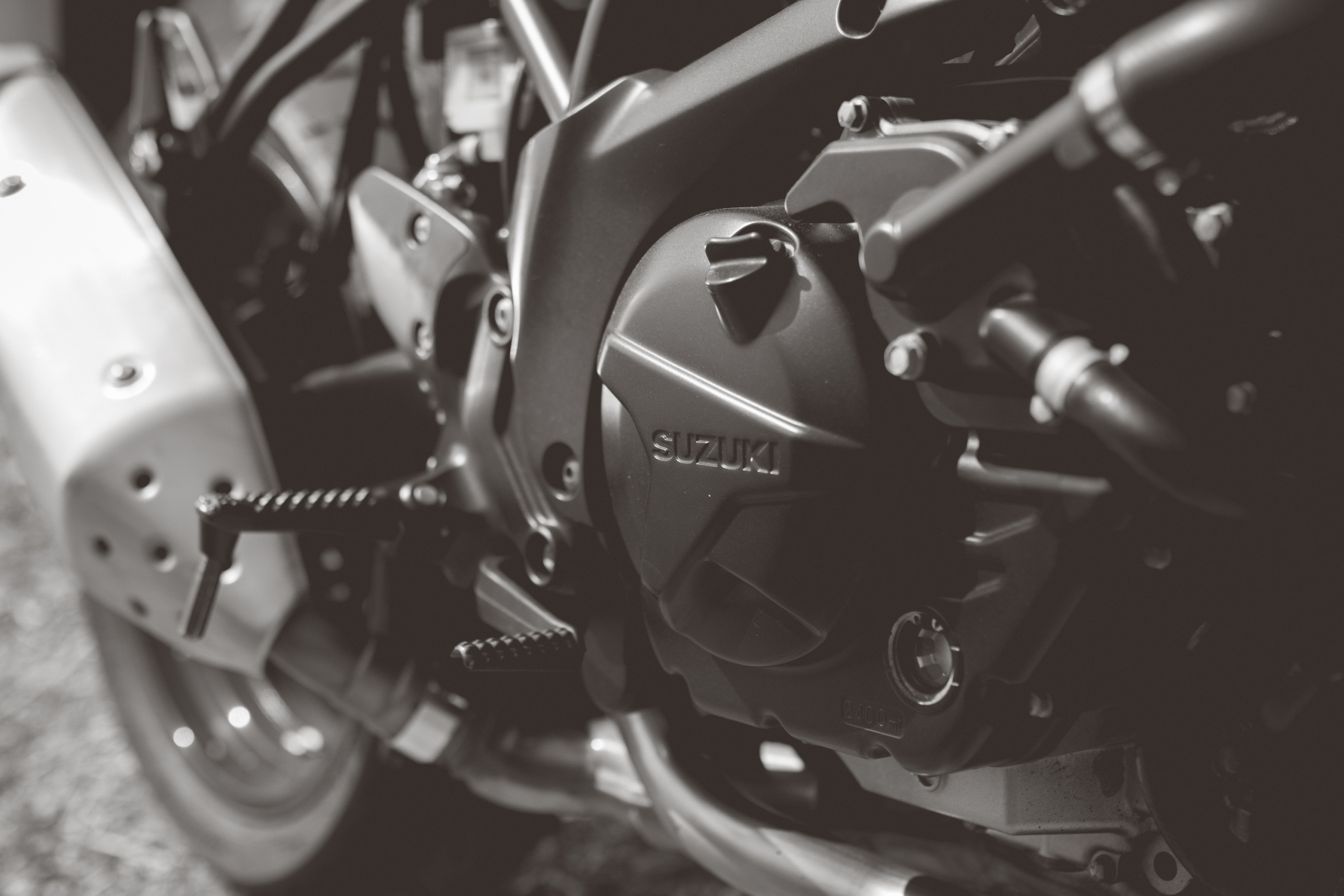 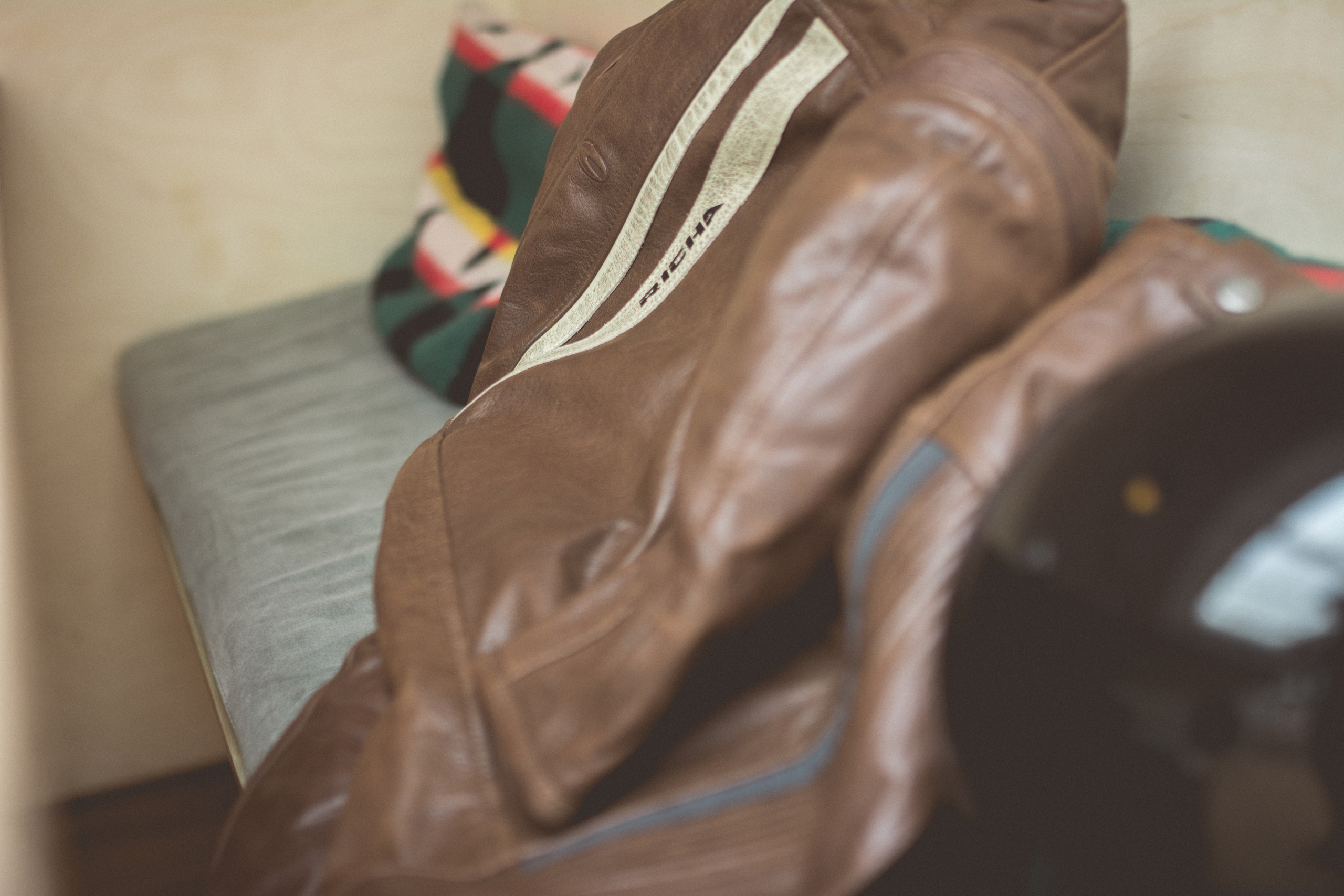 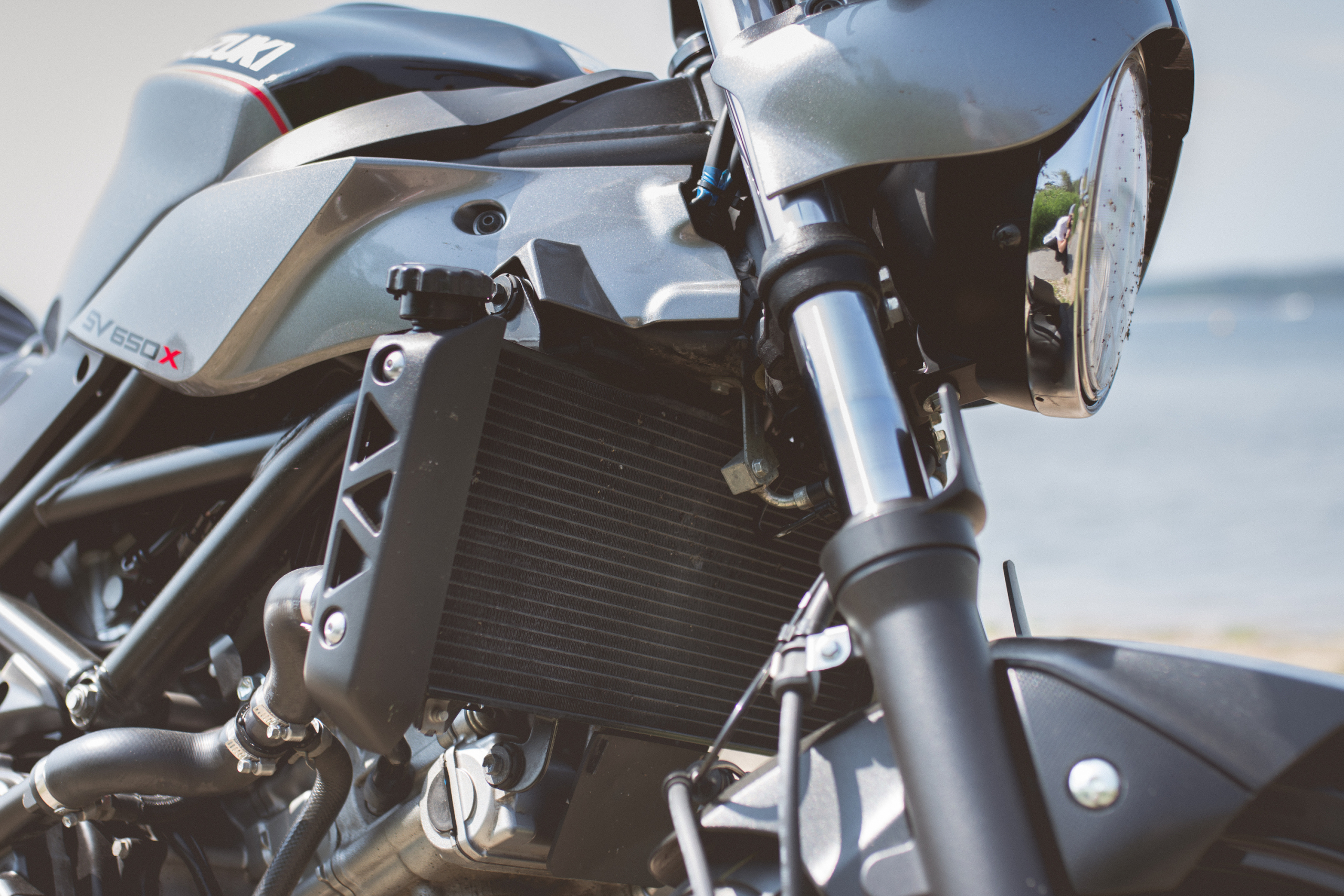 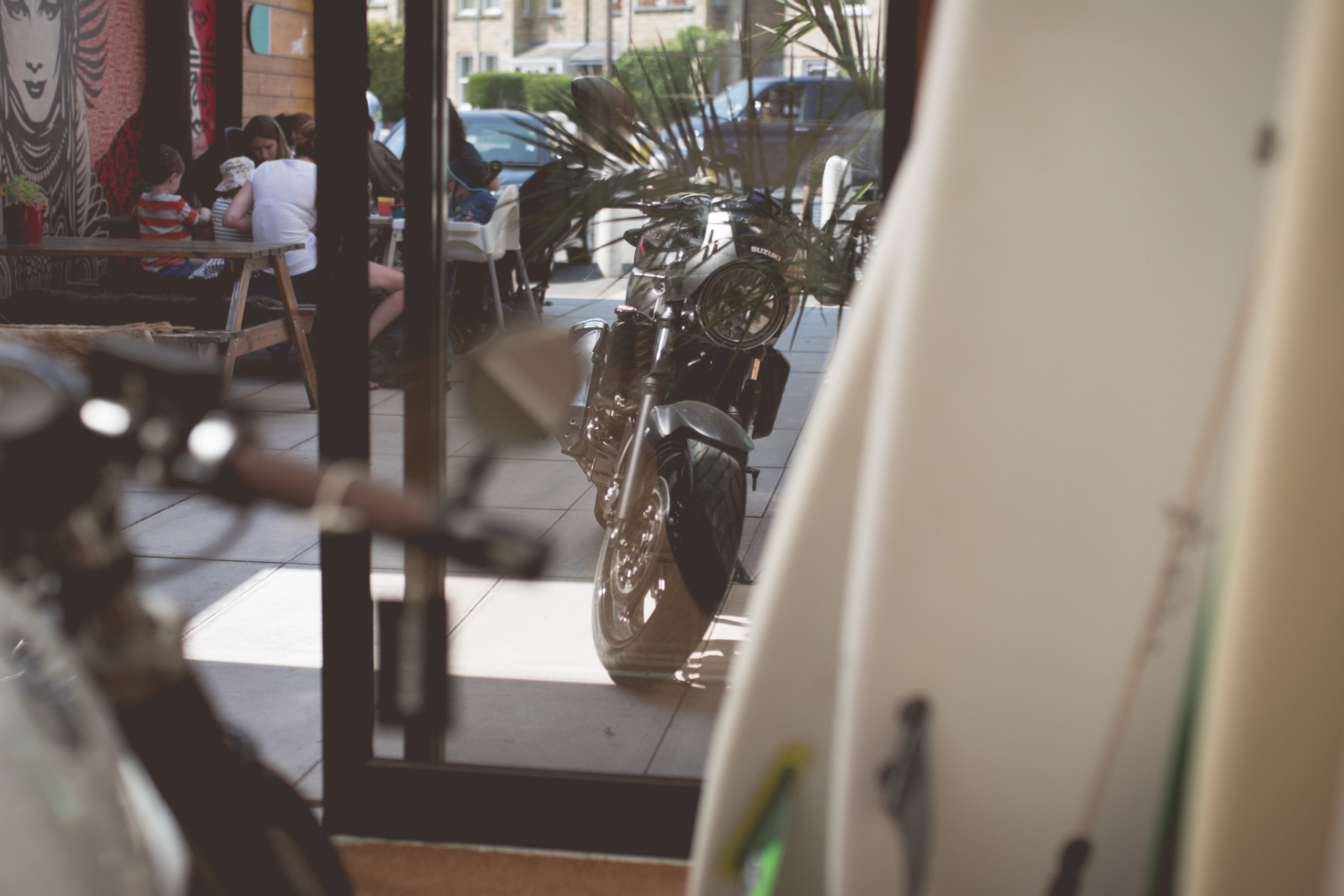 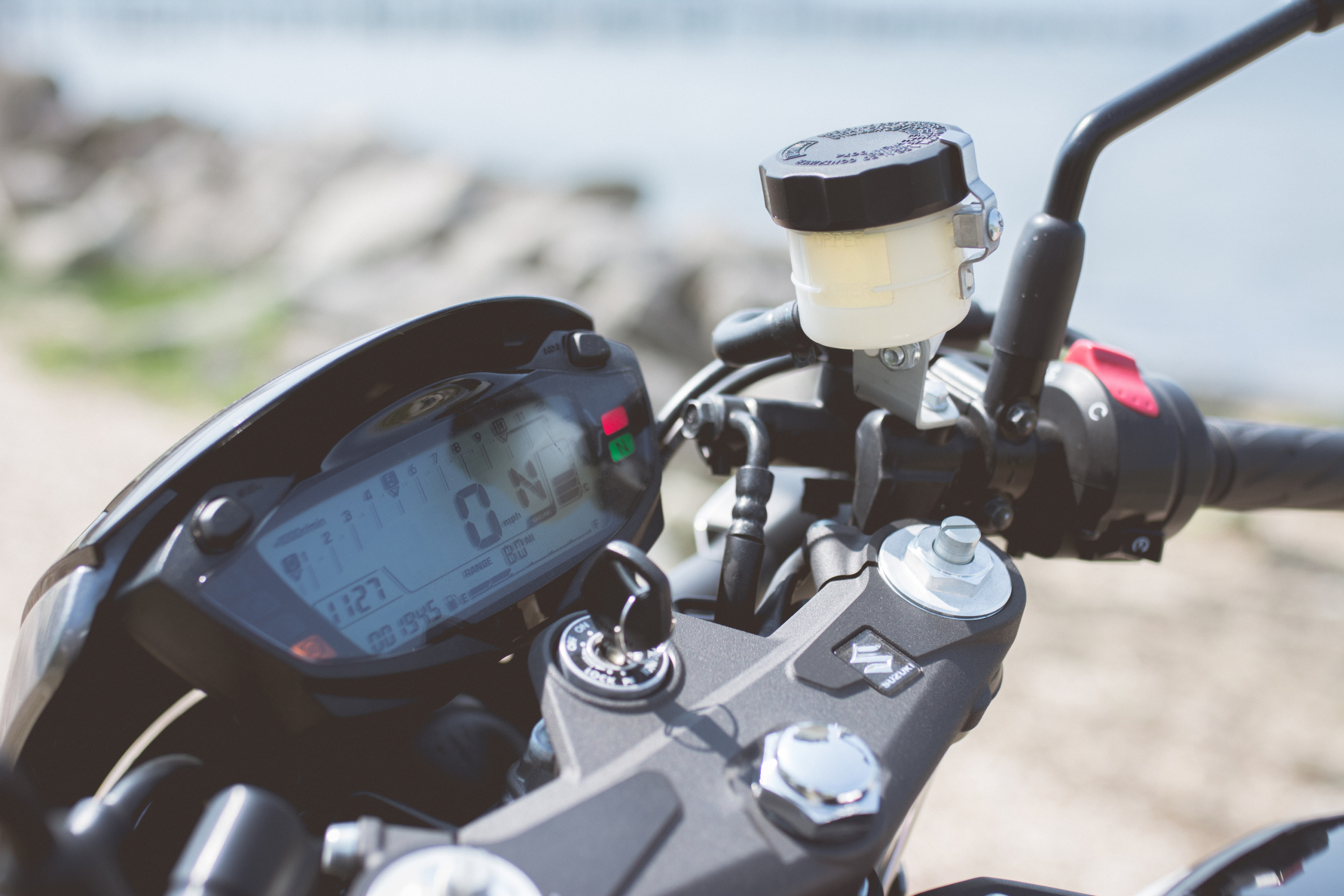 Above all else, the £300 premium is well worth paying for the ‘X’ badge, seeing as its’ a damn sight cheaper than the existing Cafe Sport pack and looks infinitely more appealing.

This isn’t a machine that’s going to curry favour with the Wheels & Waves set but that didn’t stop it from turning heads and starting conversations when parked up outside our favourite South Coast coffee spot. 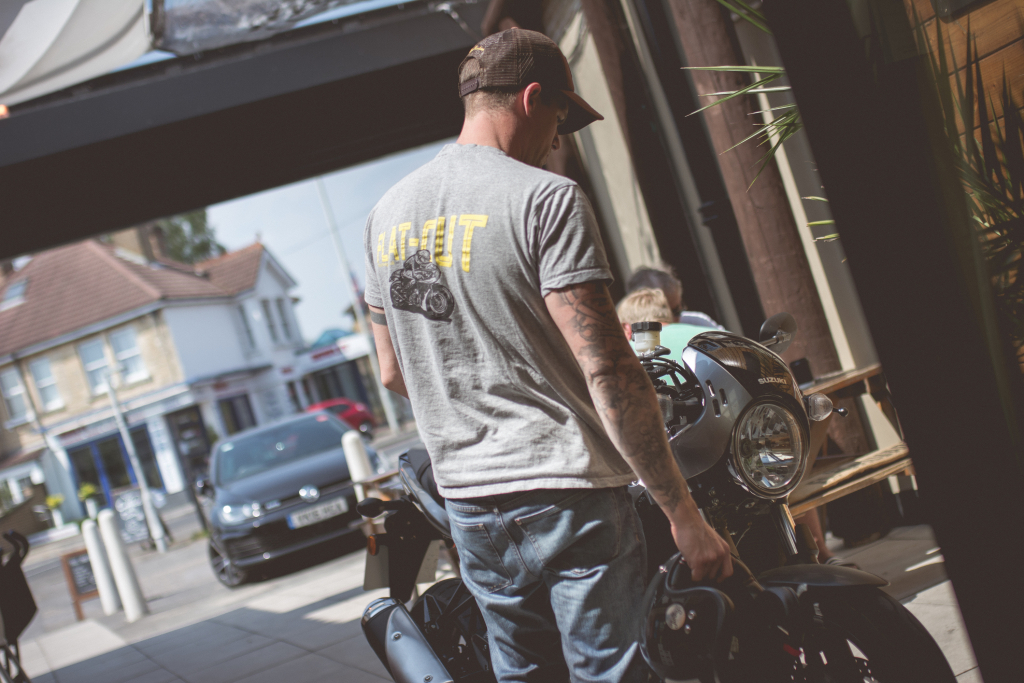 Plus, it never once proved problematic or complained after a solid weekend of hard motorway miles.

Something that certainly can’t be said of the vintage machine that’s currently leaking fork oil al over my workshop. 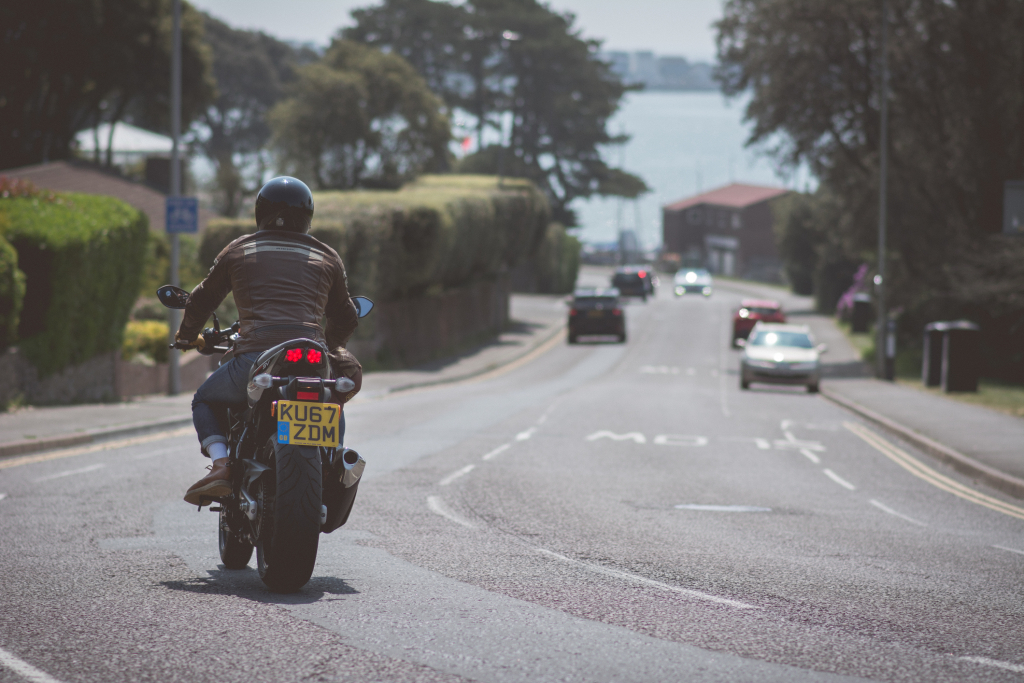 Many thanks to Coast, Poole for letting us take a few shots outside their brilliant cafe and surf shop.